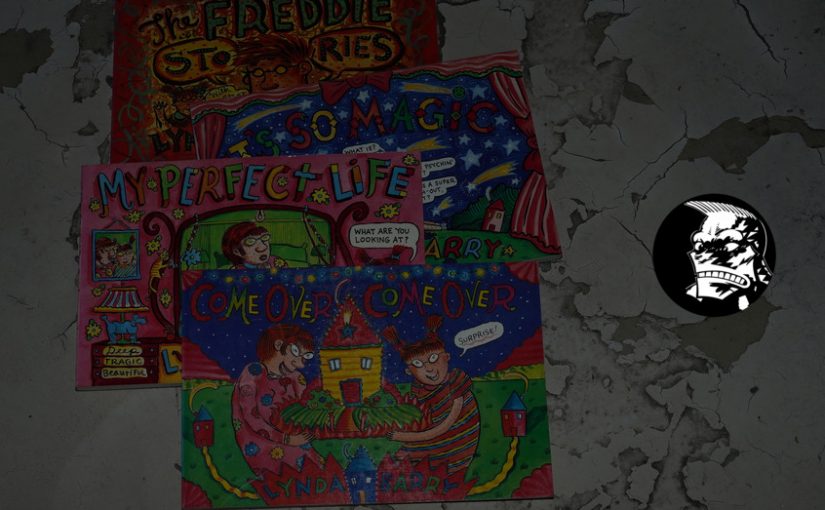 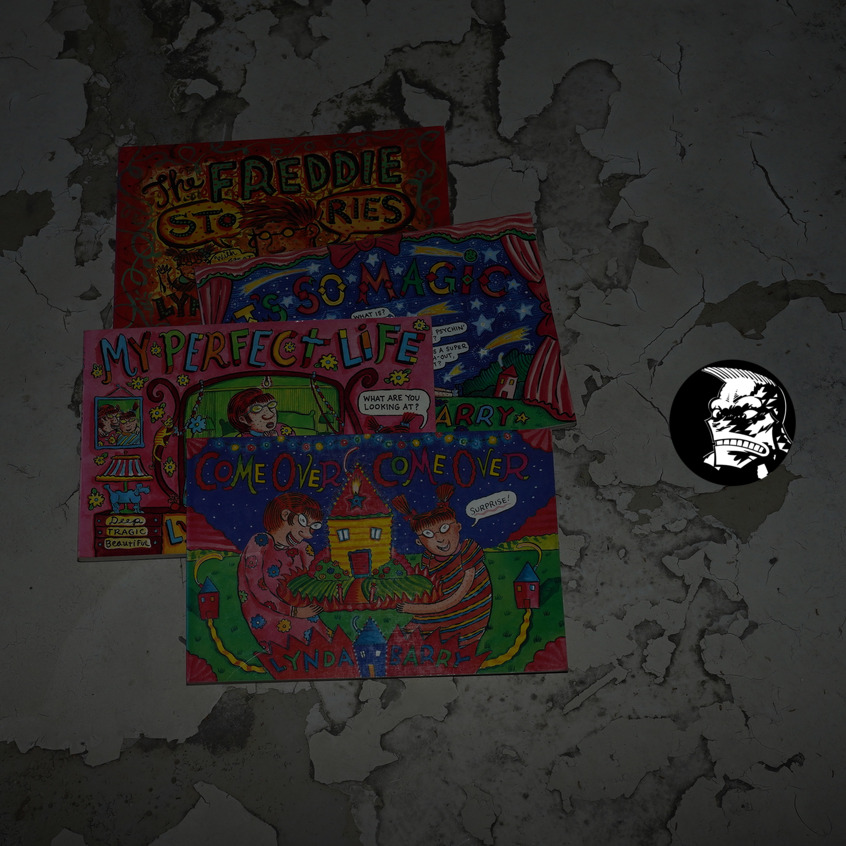 I’m not sure whether it’s because of the way I’ve read Barry’s collections over the years (I’ve tended to stumble across a copy here and a copy there in bookstores, without knowing that the book existed, and in no particular order), or it’s something innate in the work itself… but Barry’s books about Marlys (and the rest) seem less like fictions created by Barry, and more like a reality that Barry has somehow excavated.

I realise that when I’m thinking about these characters, Marlys, Maybonne, Arnold, Arna and Freddie are real to me, emotionally speaking: When Barry was still doing these books, when I found one of them, my brain would go “Yay! Now I can find out what’s happened to them since last time” in a distinctly different way than with other works I’ve followed for decades (like Jaime Hernandez’ Locas characters), that remain resolutely fictional to me.

If I’m counting correctly, there are nine of these collections, which means that there are about 550 strips collected. But Barry has worked on this weekly strip for about 27 years, so there should be about 1400 strips out there! MY GOD!!! There’s more Ernie Pook that hasn’t been collected than has been?! *image of me having a nervous breakdown*

But let’s have a look at the final four of these collections. I mean, I’ll start reading them now, and I’ll let you have a look at some of the strips, m kay?

The previous collections had focused on Arna and her cousin Marlys, but Maybonne (Marlys’ sister) had been introduced, and was in the margins of the series.

Come Over, Come Over flips that completely — now Maybonne becomes the main character, and Marlys is seen from her point of view (instead of Arna being the viewpoint character). (And Arna, Freddie and Arnold aren’t mentioned at all in this book, I think?)

Another difference is that we get more of a continuity between strips. The previous books had mostly had free-standing strips — moving to more continuity gives a very different reading experience; it’s less choppy, less dense.

And this strip is, I think, the first one to be partially “drawn by Marlys” (I seem to remember that becoming more of a thing in later books).

The strip had also, pretty much, been of the “steady state” school of storytelling. That is, nothing much changed over the course of the strips; you could read the strips in pretty much any order, and it’d make as much sense. Here there’s real, life-changing events: the sisters move to their grandmother, for instance.

Oh! This longer story was originally printed in Raw. It was awesome there, but completely without context. Here it fits neatly into the storyline, so it reads very differently. It’s… it’s even better here? It seems impossible, because it was the best thing in that Raw issue, but it is, indeed, even better in this collection.

Marlys introduces My Perfect Life on the back cover, saying that it depicts one year in the life of Maybonne. And… that’s what it does. This strip is now one long narrative, where we follow Maybonne’s life (which deals a lot with her friends and boyfriend drama).

And in the middle of it, we get another longer story that originally ran in Raw. I didn’t quite clock that it was about Maybonne when I read it there… and it doesn’t totally fit in here (it seems to contradict some other bits in the surrounding strips). But, again, it’s still an awesome story.

In earlier collections, I was impressed by how crotchety Barry kept Marlys, but in Maybonne’s eyes, she’s a much more lovable character. Or perhaps Barry has softened some.

My Perfect Life is pretty perfect. I laughed, I cried, etc.

Then it’s It’s So Magic, the final collection from Harper Collins.

This one starts with a presentation of all the characters.

The previous two collections had been about Maybonne, and Maybonne is still (mostly) the viewpoint character, but we shift back to focusing on Marlys again, and Marlys continues her journey into becoming more lovable.

After the deep turmoil in the Maybonne stories, it’s nice to pull a bit back… but… Marlys’ stories feel a bit like a retread?

However, the many strips that are drawn by Marlys do nothing for me graphically. Yes, they’re really convincing recreations of how children draw, but Barry’s normal drawing style is stunning, so I just get impatient and want to turn the page to see whether there’s anything good on the next page.

These strips are mostly from 91 and 92, and as in the previous two books, it’s one continuous story — but it’s a bit more episodic than the Maybonne epics.

Freddie (the younger brother) returns, and… then they all go back to live with their mother again.

The previous book was published in 94, and then The Freddie Stories, the next one, is from 99, and is from Sasquatch Books (and I see that Matt Groening is no longer funklord of the USA in the indicia) — definitely not as huge an outfit as Harper Collins. What happened over these five years? It’s So Magic felt a lot less… urgent… than any of the previous books, and all those strips that were drawn in the style of children drawing might not (and I’m just guessing) be very commercially appealing.

Was Barry dropped by Harper Collins? Did she stop doing the strip for five years? So perhaps there’s no collecting gap? I’ve tried to google this, but I can’t find anybody that’s written a historical overview of Ernie Pook’s Comeek and its publishing history. You’d think that would be a thing that would exist on the interwebs, but nope.

This future sucks. No flying cars and no Ernie Pook chronology.

Again, we start with an introduction… and this book is printed on bright white paper with a fair bit of bleed-through. Those Harper Collins books looked and felt just right, while this is just kinda brittle.

Hey! That’s a re-run of the baloney strip (but redrawn). Still sounds good.

These strips aren’t dated (all her previous strips have been), so I’ve no idea whether these were made over a number of years. The art styles Barry uses vary a lot — here she’s doing a kinda smudged, rough style.

There’s always been heart-wrenching things happening in this strip, but for the first time, it just doesn’t feel convincing. In this book, Freddie is involved with a case of arson (that he tried to stop happening), landed in jail, got bonked on the head so that he saw everybody as burning skulls, he’s raped, rapist dies, he gets a fever, becomes semi-autistic and… I’m sure I’m repressing a few of the atrocities.

It’s just a lot. And it’s really harsh, with barely any light let in. It’s like… what happened to sour and curdle Barry’s outlook on life?

And then the lettering grows really really big, which I take to mean that the newspapers running the strip reduced the size, so Barry had to up the lettering size.

The Freddie Stories is a depressing book. And not in a good way.

Debbie Drechsler’s work approaches the verisi-
militude of Barry’s, but its heavy tone sometimes
sinks into maudlin excess. David Kelly has tackled
similar issues of gender and childhood, but his
scenarios lack Barry’s nuance and authority. Not
even Julie Doucet’s dream comics, which are richer
visually, embody such a perfect synthesis of clever
scripting and freaky pictures. Fans ofall these artists
would do well to step outside the comics shop and
into a newsstand, where Barry’s strips will be avail-
able week after week, long after The Freddie Stories
goes out of print.

That was the stupidest review ever. Dismissed as sloppy!? Yes, I’m sure that’s true, but only by the most moronic of morons, presumably, so why mention it?

Lynda Barry’s
Come Over, Come Over

Why does Barry’s sweetness — Maybonne
says the book is “mainly about how life can
magically turn cruddy then turn .and
then back to cruddy again” — still seem so
fresh? partly because it’s so unique. The cur-
rent “adult age” of comics has misplaced
goodness. Our honest-John super-heroes have
become dark blights, sneaky sadists who bleed
like hemophiliacs. Baker considers his book
“mature” because the characters smoke and
drink and cuss before they heft the rocket
launcher.
Things aren’t a whole lot better in Barry’s
own genre, the family comedy. It’s all the rage
for dads, moms. and siblings to trade savage
wisecracks in series like Roseanne or The Cosby
Show, but any problem can be solved with a hug.
Pundits rave about the reality Of The Simpsons,
a droll but stale brood Of Fred Flint-
stone fathers Dennis the Menace (the women,
inexcusably. are disposable — this is another
bonding-with-dad dream). But even this quar-
relsome family is never more than a commer-
Cial break away from a cure-all embrace; the
treacle here is only mitigated by the fact that
Bart is such a little shit.
Lynda Barry’s sweetness seems much more
bearable, mainly because it’s more than Offset
by abject terror. Hugs won’t keep her Mullen
family from disintegrating. In Come Over, Come
Over Maymnne and Marlys, the tux) sisters who
have held Barry’s “Ernie Pook’s Comeek” since
1988. live with their divorced mom until they’re
Shunted away to grandma’s, where they again
see their alcoholic, estranged father. Tossed like
hot potatoes, they attempt to hide their feelings
and to order their world by constructing some
sharp categorizations, like the “cruddy” and the
“beautiful”.
That dichotomy says a lot about Barry, but
even more about Maybonne, whose letters and
diary entries relate most of this volume’s strips.
Maybonne, 14, is growing up here, groping her
way through puberty and a shattered family. At
times her observations seem too wise, too
philosophical, the straining voice of her author
rather than her soul. But, for the most part,
Maybonne struggles with a really tough part of
maturity: the breakdown of classifications.
Barry has always given us lists, multiple-
choice questions, labels (as has, more famous-
ly, Matt Groening). Sometimes these take the
form of jokes: one strip, “Marlys’ Auto Bingo,”
bullets 23 familiar items to look for on car
drives. More subtly, the characters classify each
other. developing codes to help them understand
their lives.