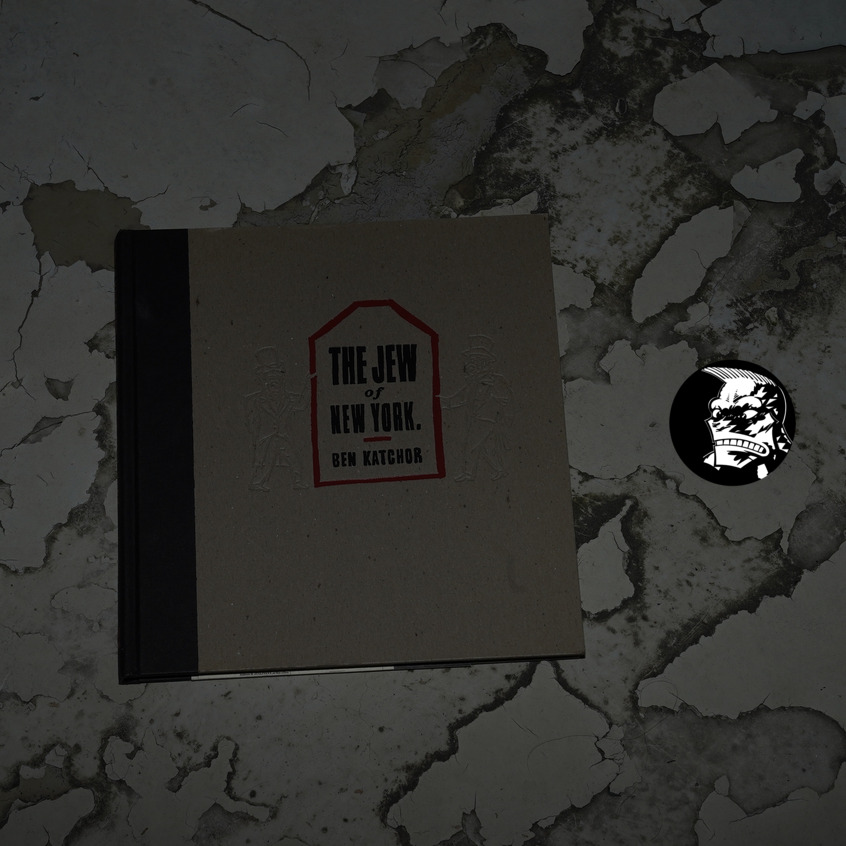 I’d forgotten about this book! I thought it was another one of the Julius Knipl collections, but it’s a totally separate work. 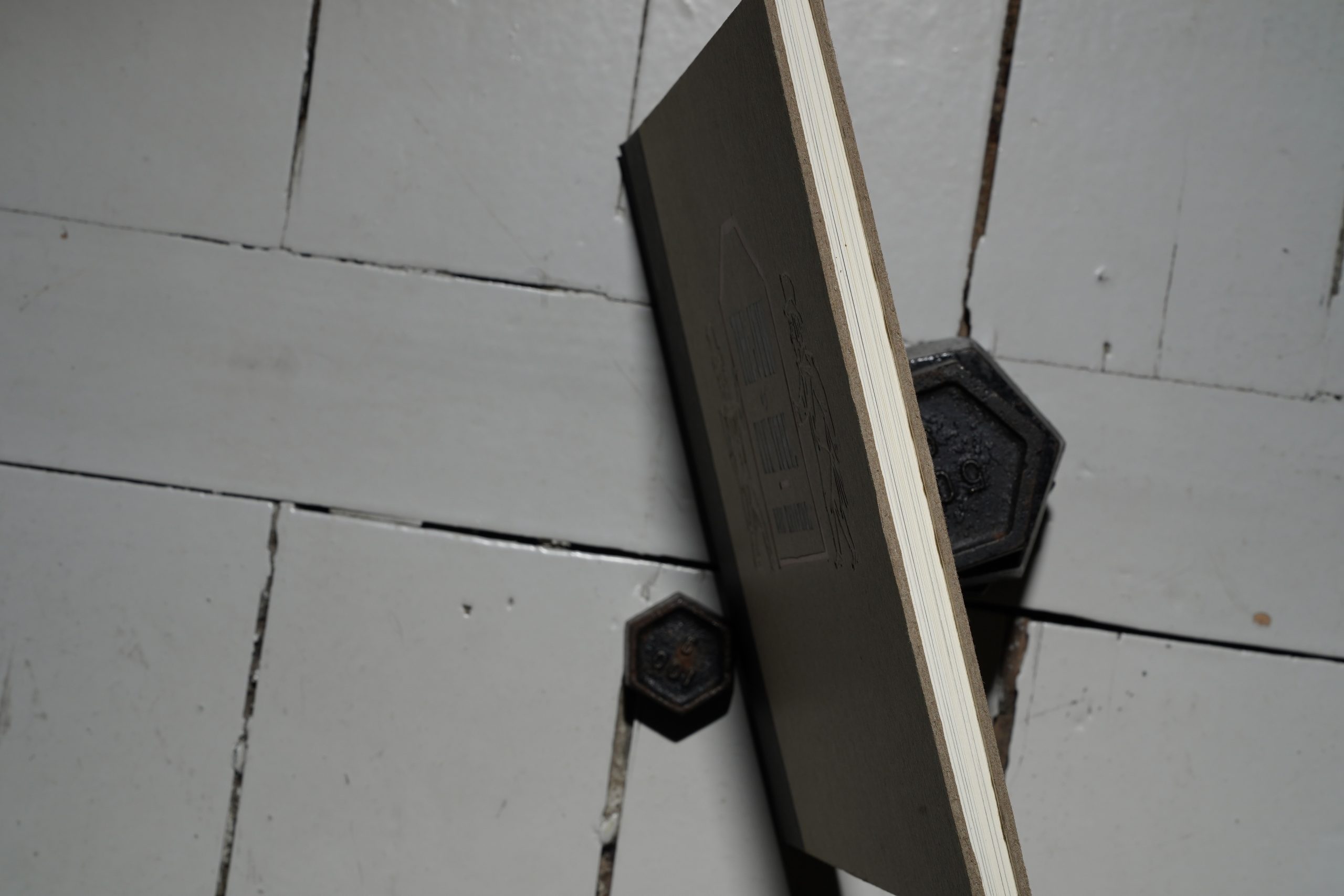 It’s a very handsome book. Almost square, and with these thick, rough-hewn covers… designed by Chip Kidd, of course. 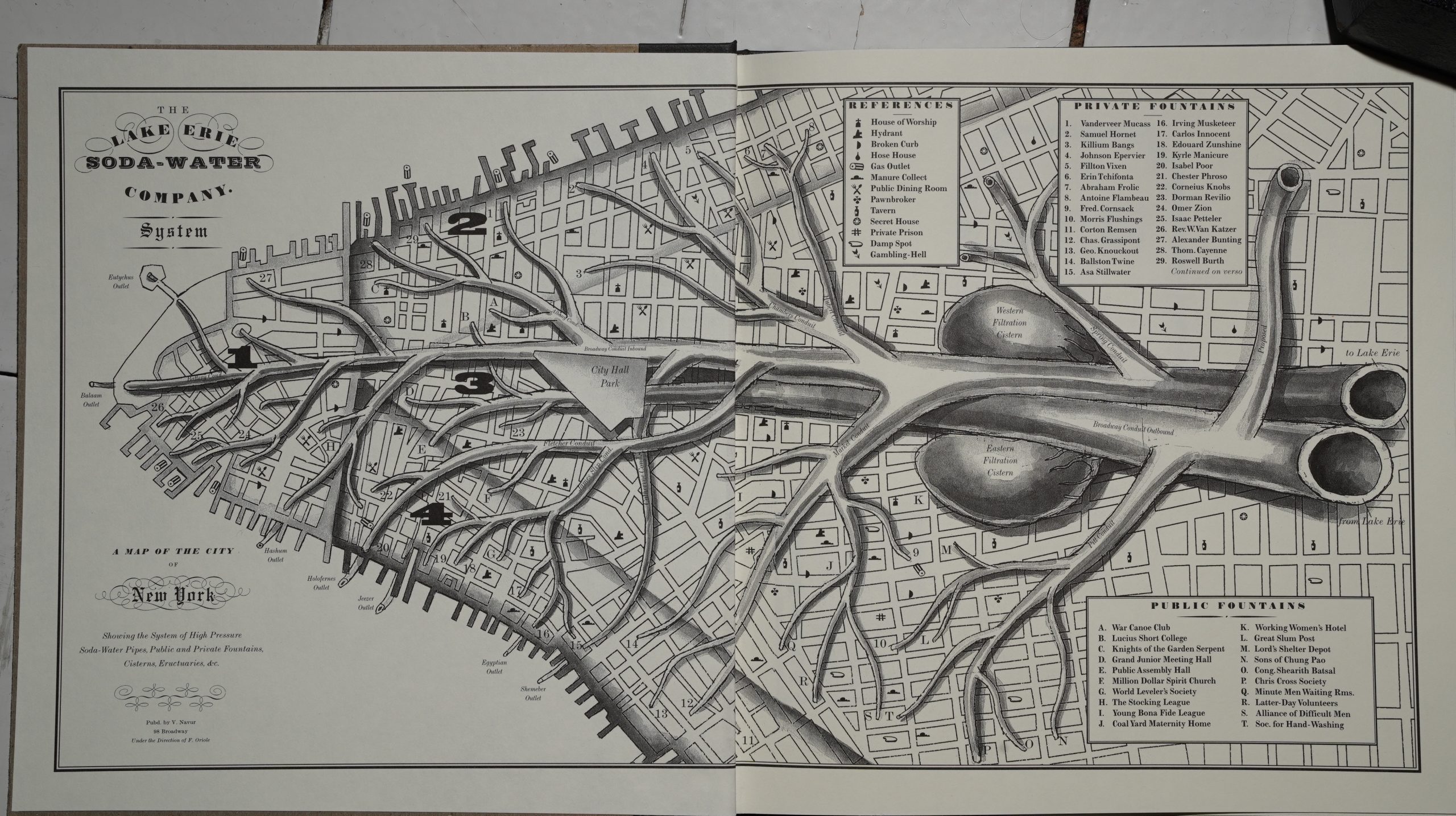 One of the plots in this book is about carbonating Lake Erie, and then supplying cities with soda water on tap. Let’s read the first three pages: 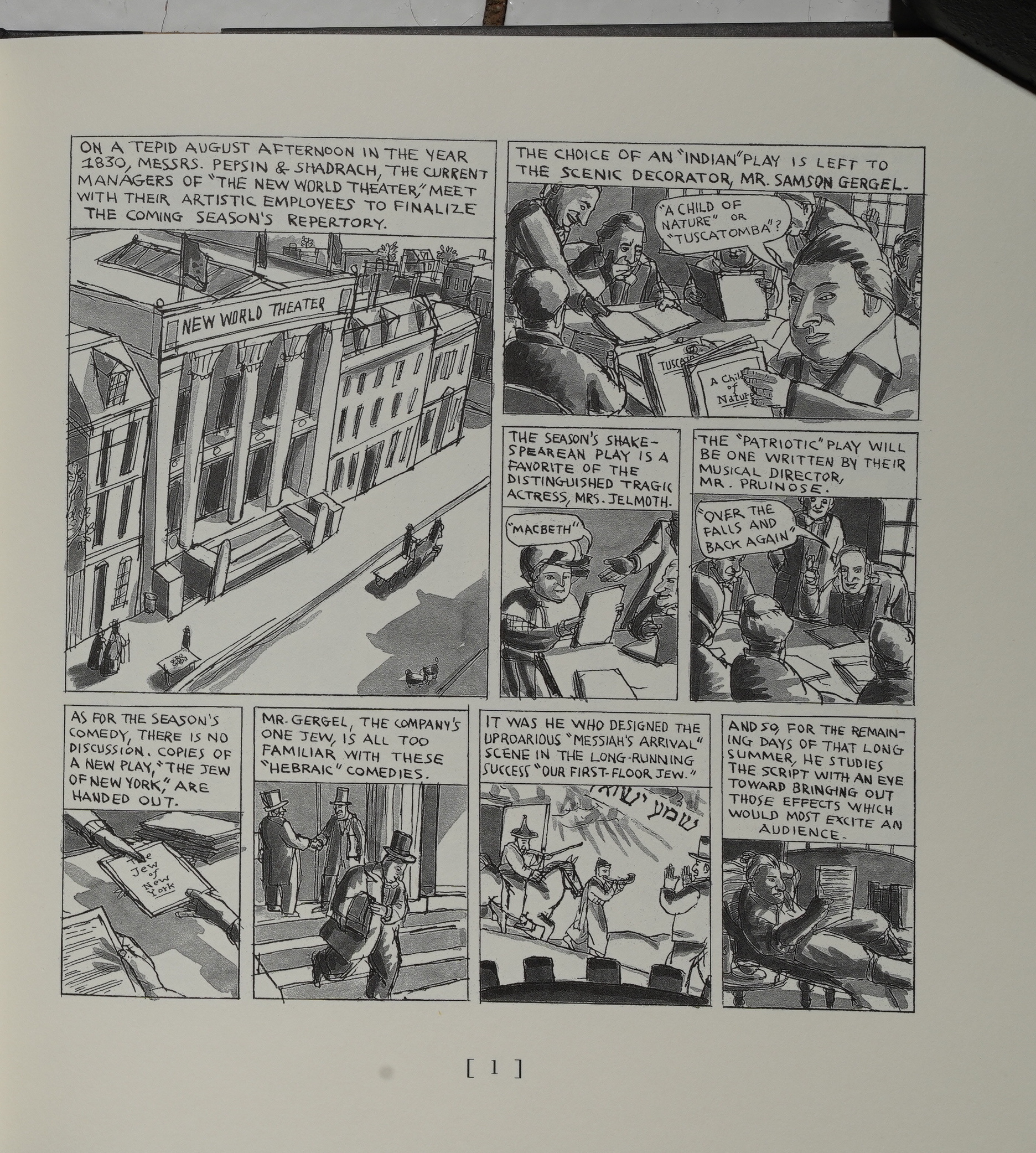 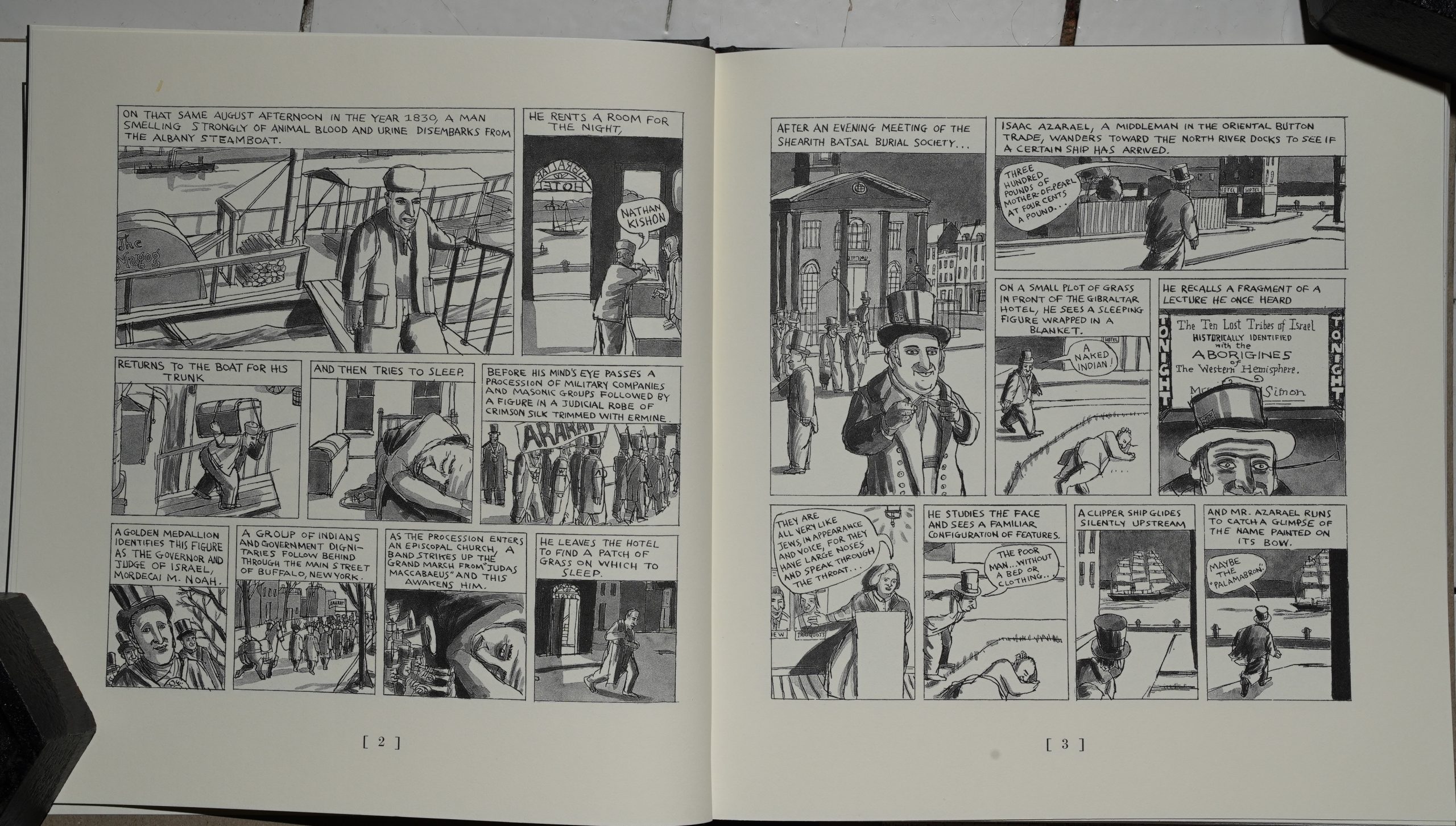 This may not be Julius Knipl, but it’s very Ben Katchor: Everything is told in a slightly oblique way. It’s not that it’s obscure or anything, but (as usual) I find that I have to backtrack a lot to actually take in what’s happening. There’s something oddly dream-like about Katchor’s way of presenting things that just makes the reading… slippery… 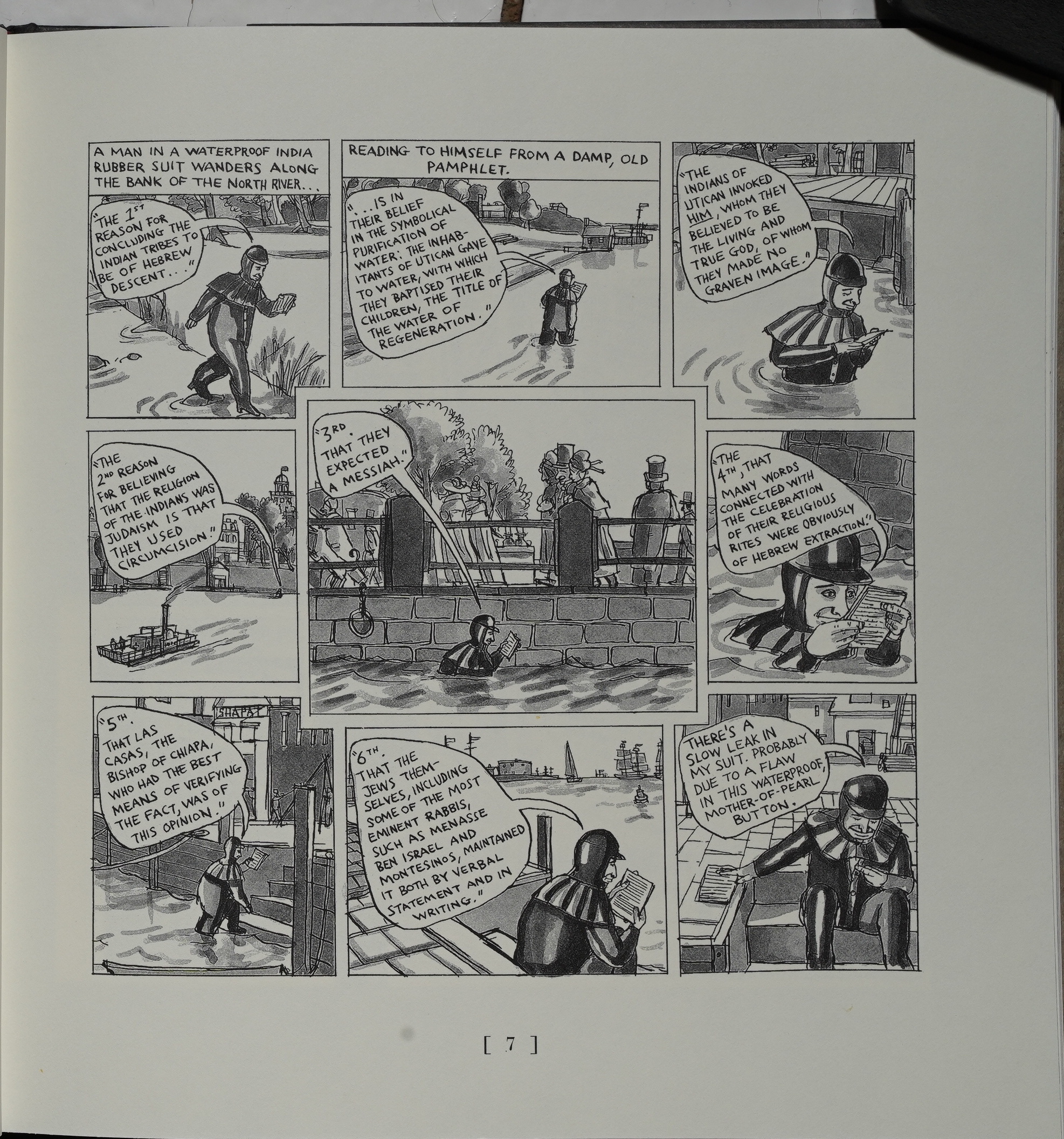 It’s one long story, but Katchor introduces so many different characters and situations that I found myself wondering whether Katchor was just doing a shaggy dog story. 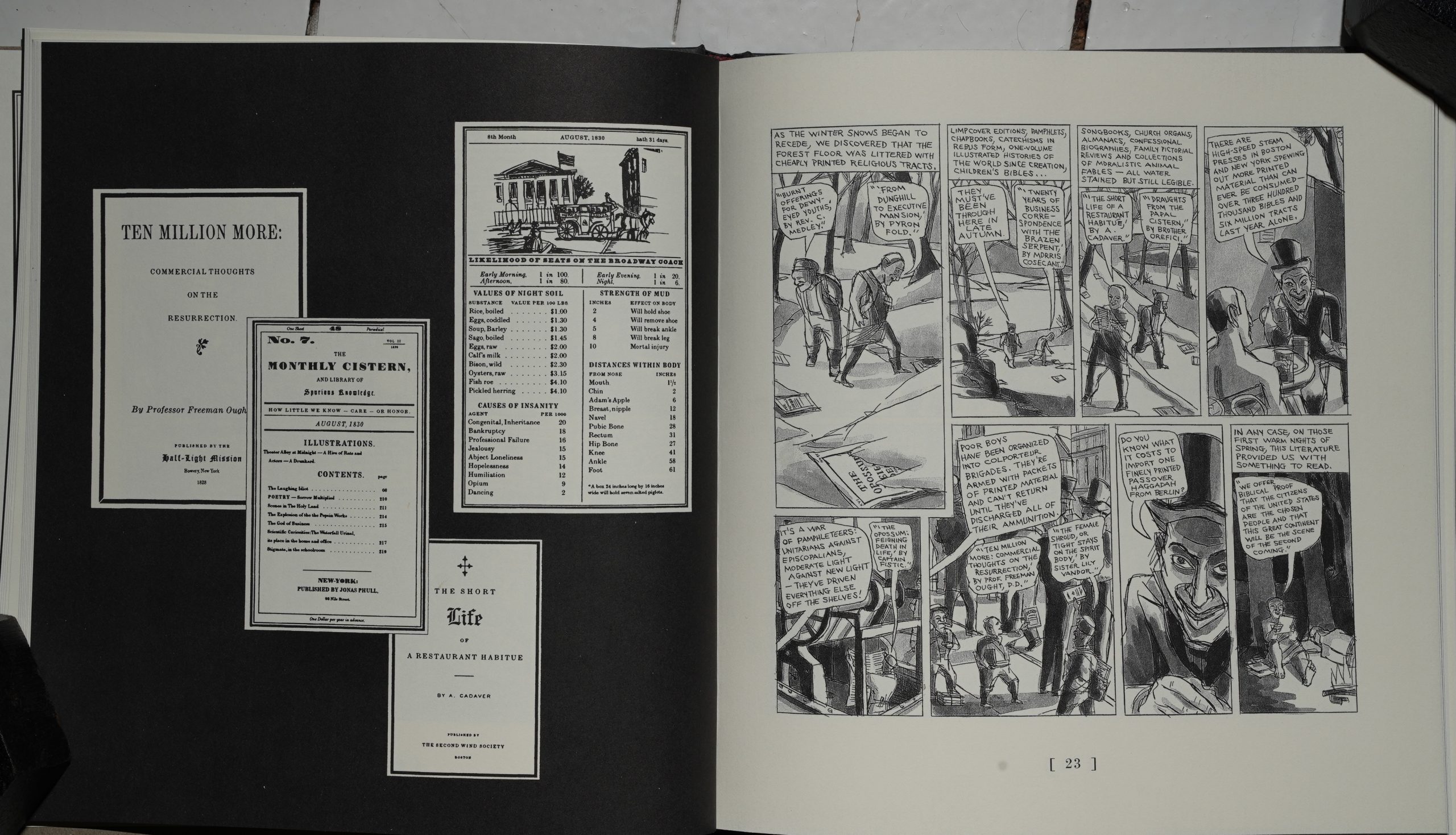 He also references a lot of 1800s folklore (and stuff), and I don’t know whether any of it’s real or just made up by Katchor. But it doesn’t really matter much — it reads as if it’s real and has significance. 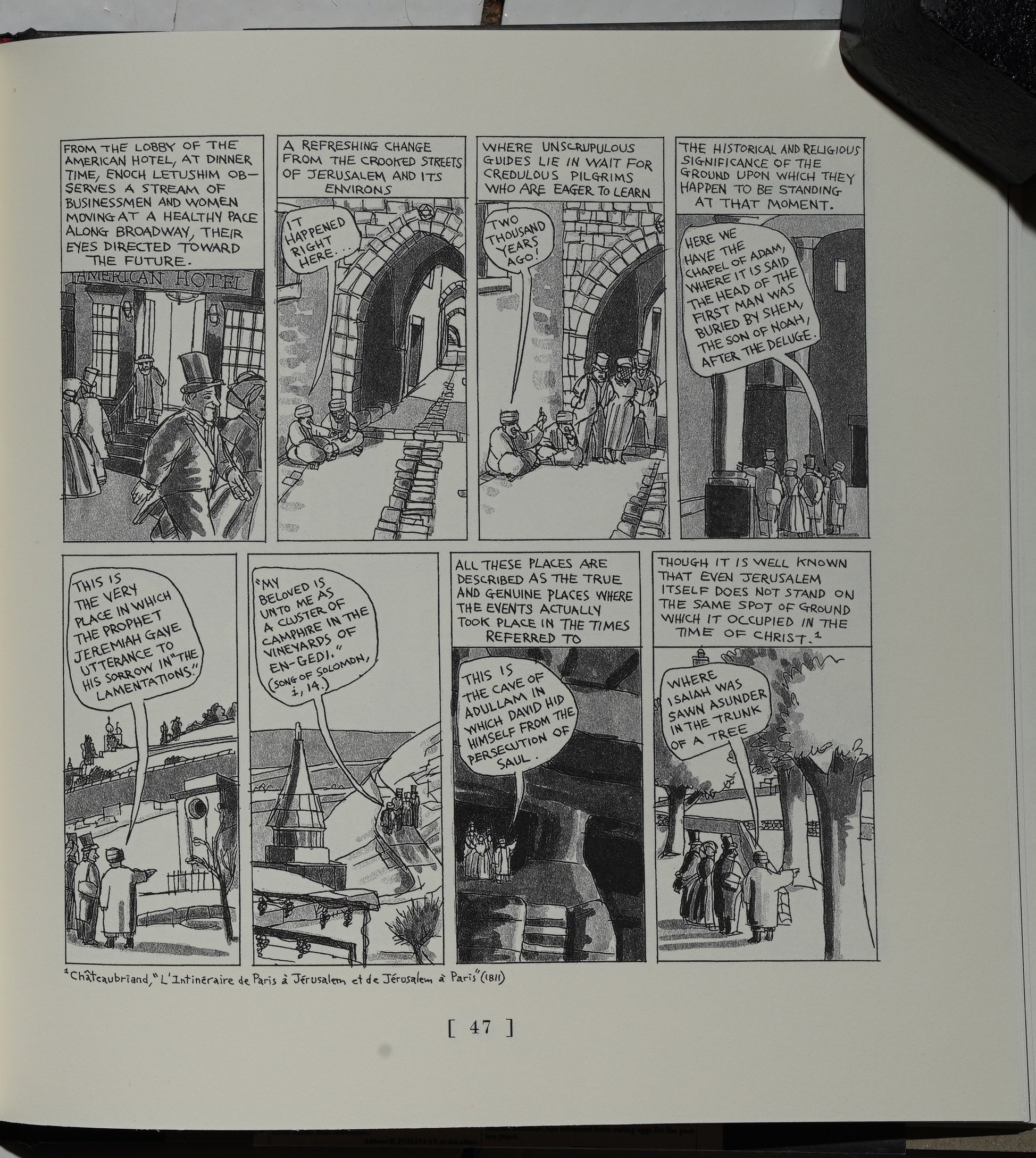 Hm. Did they move Jerusalem? That’s difficult to google. 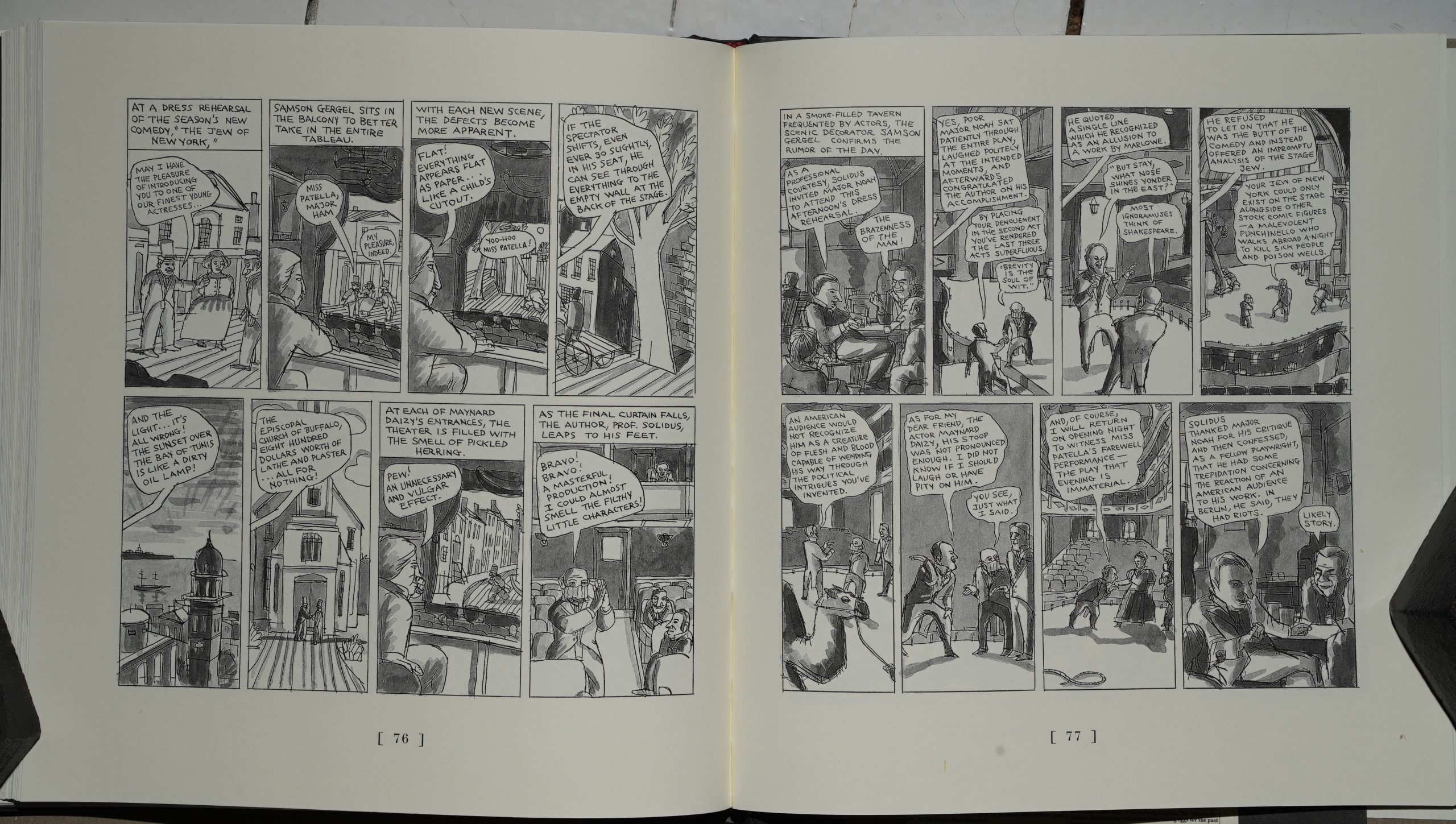 In the last half of the book, Katchor finally stops introducing new characters and locations, and we get on with the action (so to speak), which involves putting on a theatre play called The Jew of New York, written by a rabid anti-Semite, as well as a guy swindling another guy out of some beaver pelts, and… it all ties together! Sort of!

It’s a pretty thrilling book to read, but it’s… hefty. It’s under a hundred pages, but I feel like I’ve spent all day reading it. Hm. Which I have.

It’s dense. But totally worth it.

(And I didn’t mention how gorgeous the artwork is, because you can see that yourself, right?)

The title of Ben Katchor’s phenomenal new
graphic novel, set in the hustle and bustle Of
New York City in the year 1830, is a deliberate
play on that other notorious anti-Semitic Eliza-
bethan drama (the one that didn’t bequeath
unto the English language the word •shylock”),
Christopher Marlowe’s The Jew of Malta.
Katchor’s book strikes the theatrical note im-
mediately: On the title page the main charac-
ters are presented as little cut-out paper dolls
for a children’s theatre, and the story proper
opens with the New World Theater company
readying itself for the production Of a play
called The Jew of New York” —which is, in the
words of the scenic designer Samson Gergel
(the lone Jew of the company), a •cheap bur-
lesque” of the life and achievements of Mordecai
Noah. Few details of the play are revealed. but
the fact that Noah has been renamed “Ham”
suggests its anti-Semitic nature (while doub-
ling as a theatrical pun). And when the author
of the play shows up later in the book, he turns
out to be a fervent admirer Of Marlowe, and is
tickled when a viewer (the visiting Noah, exhib-
iting surprising good humor in the face of
abuse) picks up a reference to Marlowe in the
text.
The Jew Of New York” becomes something
Of a fulcrum for the graphic novel. Not only
does the mounting of the play form one of the
major plot threads of the book (and when
things go lethally wrong in the last quarter,
almost all the disasters have to do with the
play), but the character who eventually im-
poses himself as the protagonist, Nathan
Kishon, has an indirect link: he was one of the
members of Noah’s doomed attempt to estab-
1ish a Jewish colony in Upstate New York (a
central element of the play-within-the-book).
The Jew of New York’s back-cover notes
confirm the authenticity ofboth Mordecai Noah
and his colonial venture, but in this age of put•
ons, metafictions, and deceitful “based on a
true story” credits, it seems necessary to point
out that Noah (“the most influential Jew in the
United States in the early 19th century,”
Seymour Brody calls him in Jewish Heroes and
Heroines of America) is an authentic historical
figure whom Katchor has shanghaied, Ragtime•
style, into his irreverent and playful fictional
universe. (This caveat seems especially neces-
sary since the period advertisements and pam-
phlets that dot the book, scrupulously “dis-
tressed” for maximum credibility. are in fact
fake.) Noah, a successful entrepreneur. politi-
cian. military man, and playwright, did envi-
Sion a Jewish colony on Grand Island in
the Niagara River, and this venture that
ended in failure. (l)

The Jew of New York came to
me with a reputation as a “dif-
ficult” work —
a reputation
that, upon reading, seems un-
deserved. Yes, the heavily-captioned, compli-
cated narrative and tiny panels do make it a
dense work (your average Drawn & Quarterly
cartoonist would have required five novel•
length books to get this much sheer story
across): you have to stay on your toes to keep
the interlacing narrative threads straight. And
I’ll admit that Katchofs gallery of similarly-
designed players can confuse the eye and the
mind in spots. But his decision to stay with one
thread for the first third of the book sharpens
the focus, and once the narrative begins rock-
eting from one character to another again, it’s
less daunting than it might otherwise have
been.

A word on Chip Kidd’s striking design.
Kidd,who has designed books by Nabokov,
McMurtry, Leonard, and Amis, has a particular
flair for comics-related graphics: he was in-
volved in the production of two books on
Batman, and has used cartoonists for some Of
his projects (such as the Peter Mayle book
Anything Considered, whose uncredited Chris
Ware cover illustration caused a number of
double takes among comics readers browsing
at their local Barnes & Noble). With The Jew of
New York’s title printed roughly on thick, un-
finished cardboard (held up by two characters
who exist only as stenciled line drawings), all
the relevant information that normally goes on
the back cover is printed on a loop of paper that
can be removed by those readers who enjoy the
pristine cardboard. (In fact, the endpapers,
which are loaded with art and copy, can only be
read if you slide this loop off, or at least back
and forth.) This may all seem a
little over the top to the reader
wary of graphic pretension, but
theresults are a delight to hold—
and The JewofNewYork is one of
those rare books that will look
better the more beat-up it gets
through subsequent readings; in
a few years, copies may Start to
look like authentic documents
from a century and a half ago: the
paper is a creamy, faded off-white
already.

As any juggler can tell you, one of the
hardest parts is stopping. With something like
a dozen plotlines spinning through the air,
Katchor eventually lets half of them drop to the
ground to shatter: Four of the main characters
are killed in the last 20 pages: a fifth will almost
certainly go to the gallows for One Of the
killings; a sixth engineers a scam and goes
underground, to what is essentially a living
death. This may be one or two deaths too many
(and I’m not even counting a shipwreck, re-
vealed late in the story, which ruins a seventh
player): it suggests a slight desperation to •get
off.” to use the appropriate vaudeville term.
Moreover. in a story where the main romantic
subplot consists in a lunatic’s onanistic obses-
Sion with flyers depicting a wooden-legged
actress, the semi-romantic ending for Kishon
comes somewhat out of left field.
Then again, it’s hard to imagine how else
Katchor might have ended this insane whirligig
of a yarn, and in the face of such wit, craft, and
inspiration, any carping is ultimately beside
the point. The Jew of New York is a rich, heap•
ing, and delicious meal, and the only proper
response, really, is thank you.
Or perhaps grepts. +

Kim Thompson is insightful as always.

A word about the physical book itself: The spidery drawings of Katchor’s ”historical romance” are elegantly bound between two pieces of embossed but unfinished cardboard and augmented throughout by an assortment of fake documents, facsimile handbills and period maps. ”The Jew of New York” is not only something to read but to ponder — an object nearly as strange and striking as the story it contains.

Katchor’s ingeniously meandering tale uses multiple, overlapping story lines to illustrate aspects of urban and frontier life. Characters overlap, pass each other and return in a rich stew of hucksterism, scientific idealism and trashy popular culture that fancifully recreates the advent of a new mercantile age.

But perhaps not by the comics crowd:

There are a lot of great moments embedded in this narrative but it takes a committed reader to dig many of them out this time, and if you aren’t already a fan of Katchor’s urban magic realism you may not enjoy having to concentrate that hard.