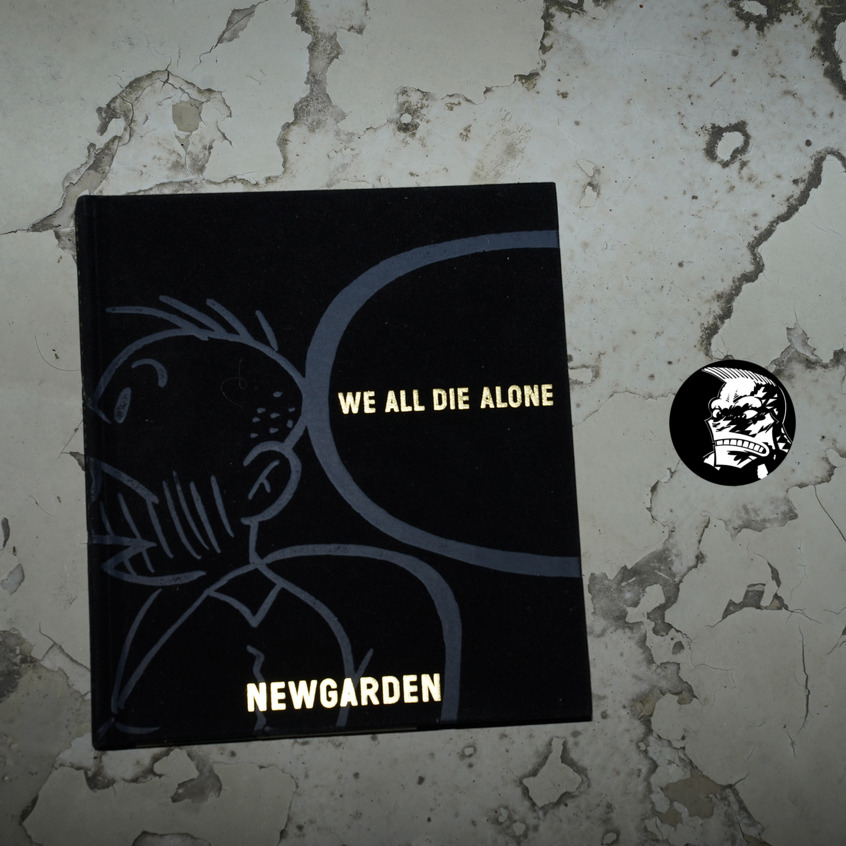 Unusually for a Fantagraphics book, this book has a very… extra… physical appearance: The cover is bound in a felt-like material, so it feels like fondling… moleskin pants or something. 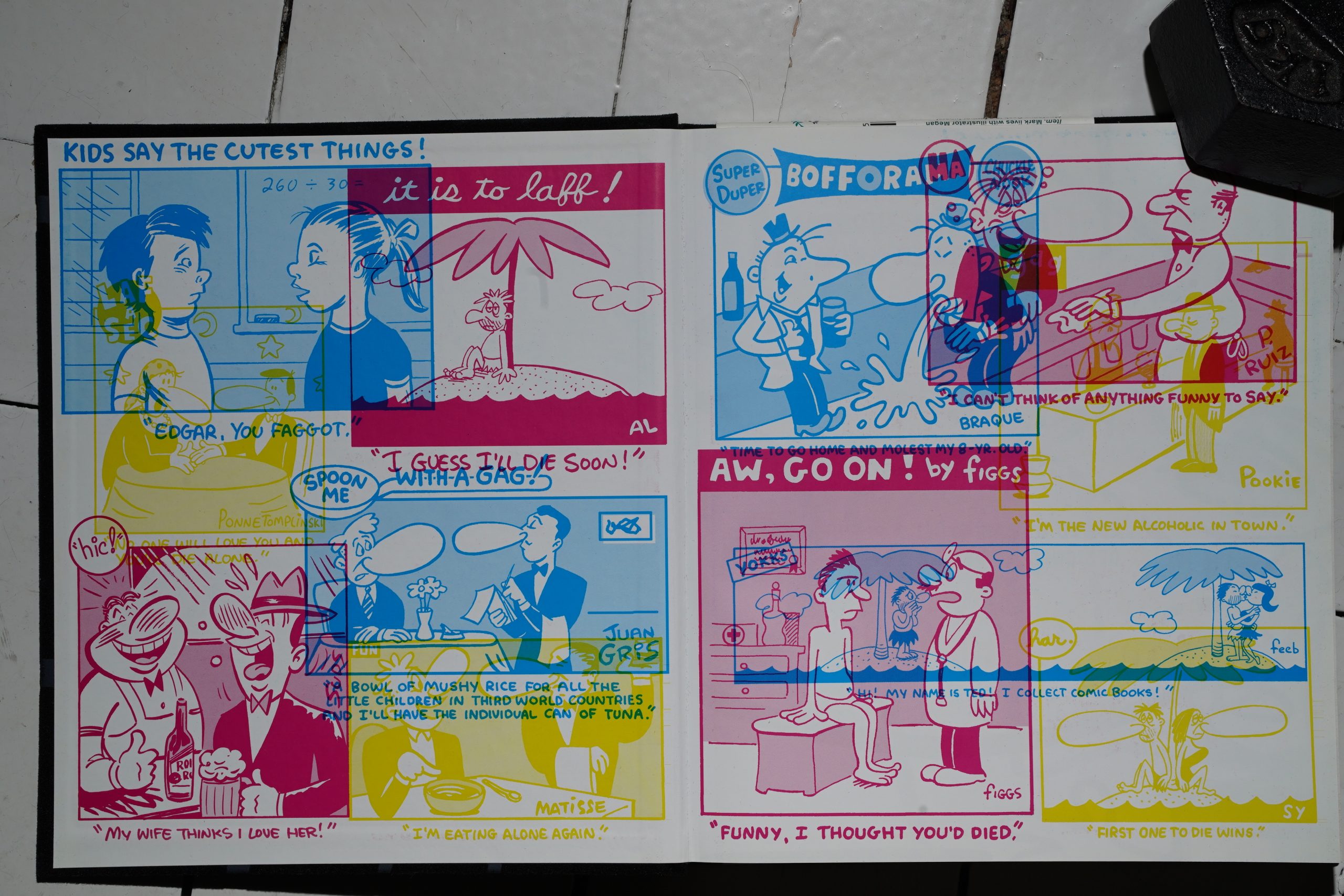 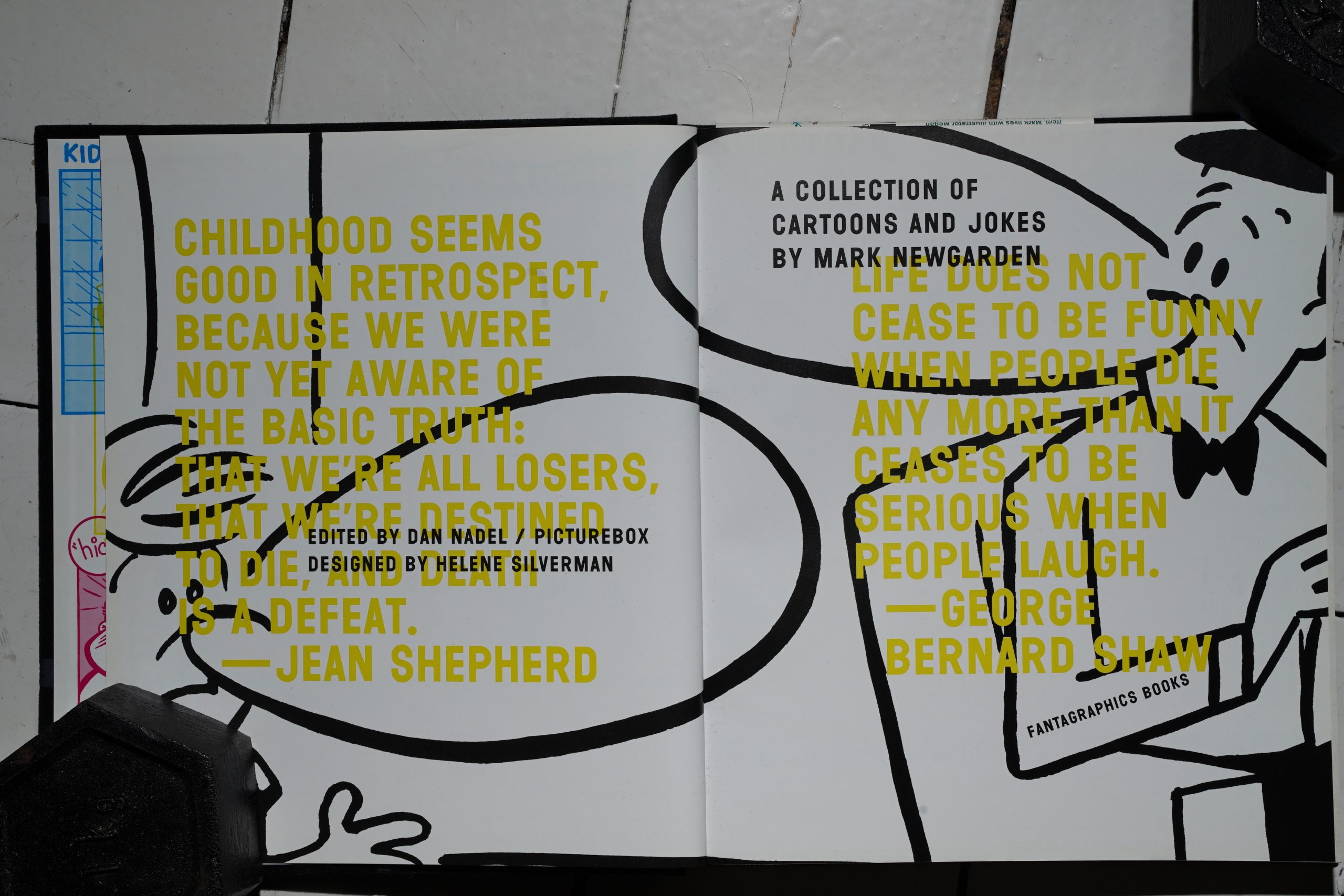 Ah! Edited by Dan Nadel (i.e., Picturebox) and designed by Helene Silverman. You can tell just by touching this book that it wasn’t designed in-house. 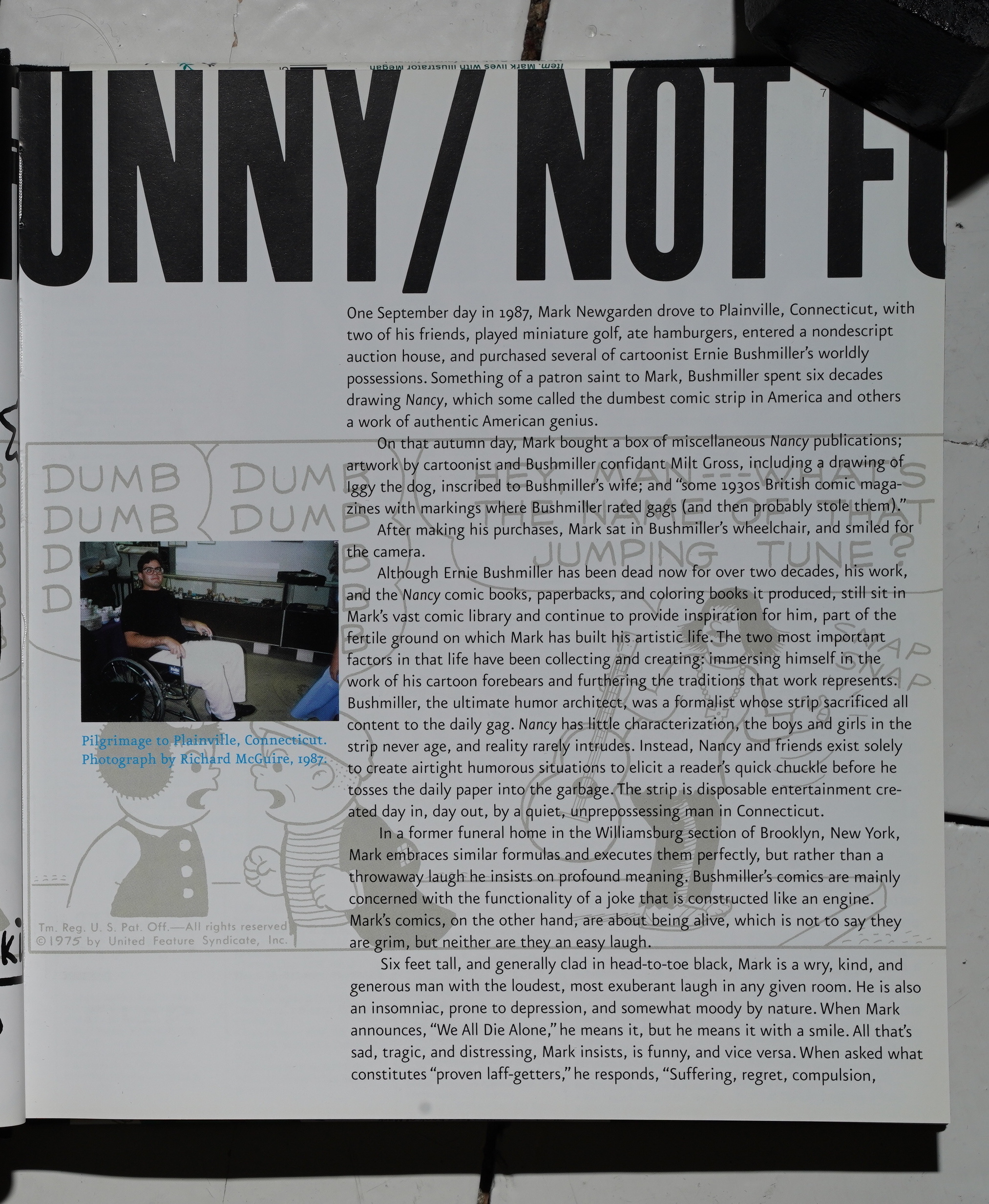 We start with a ~20-page introduction by Nadel, which… is probably a good idea? Normally when opening a book like this and then confronted by somebody exhorting me to realise what a genius the creator is (I think this covers 97.9% of all introductions in comics books), I just get annoyed and skip it; it sours the reading experience. Nadel manages to write interesting stuff about Newgarden’s work, which makes a change.

I mean, much more interesting than this blog series. (I’m so self deprecating, see.) 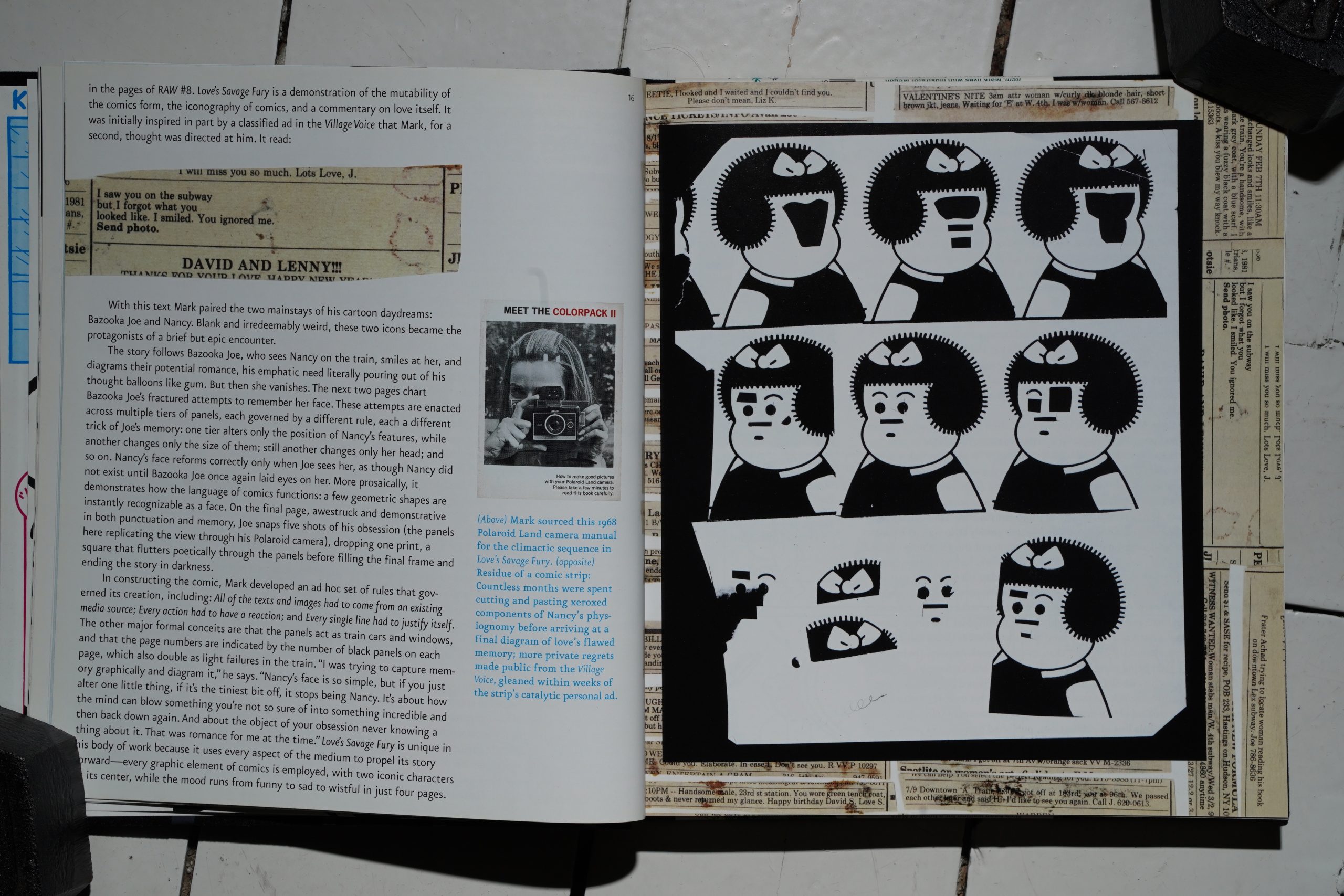 Nadel says that Love’s Savage Fury, Newgarden’s piece from 1986, “remains unsurpassed today”, which is both correct and a sort of… dig… at the rest of the contents of this book. Because as hard as he tries to provide context for the reader to appreciate Newgarden’s 90s work, it’s an uphill battle.

I mean, What We Like and Love’s Savage Fury are absolutely, mind-bogglingly fantastic, but the big-nose stuff… 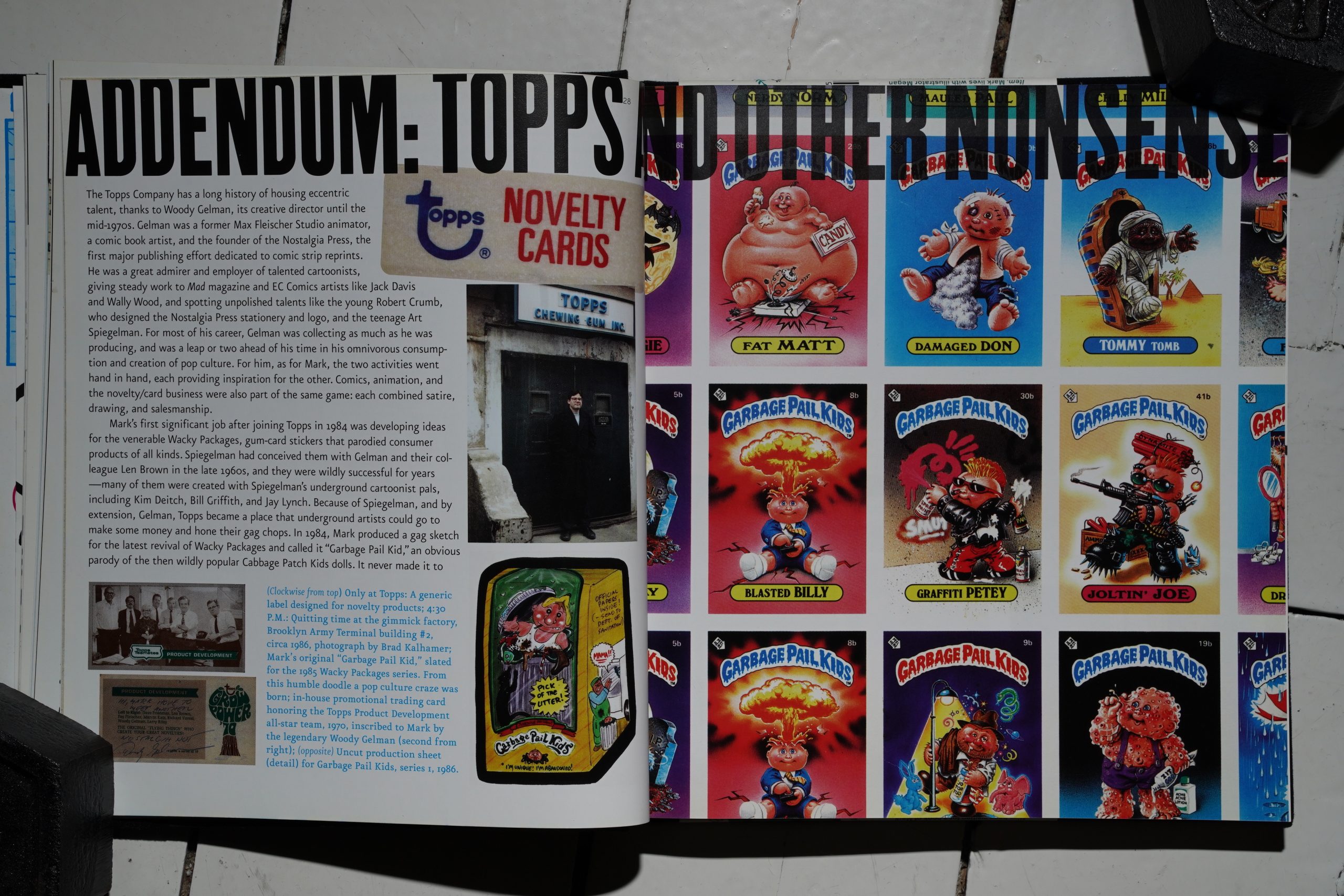 This feels like a very thorough career retrospective. Newgarden invented the Garbage Pail Kids trading cards, and we touch upon that. 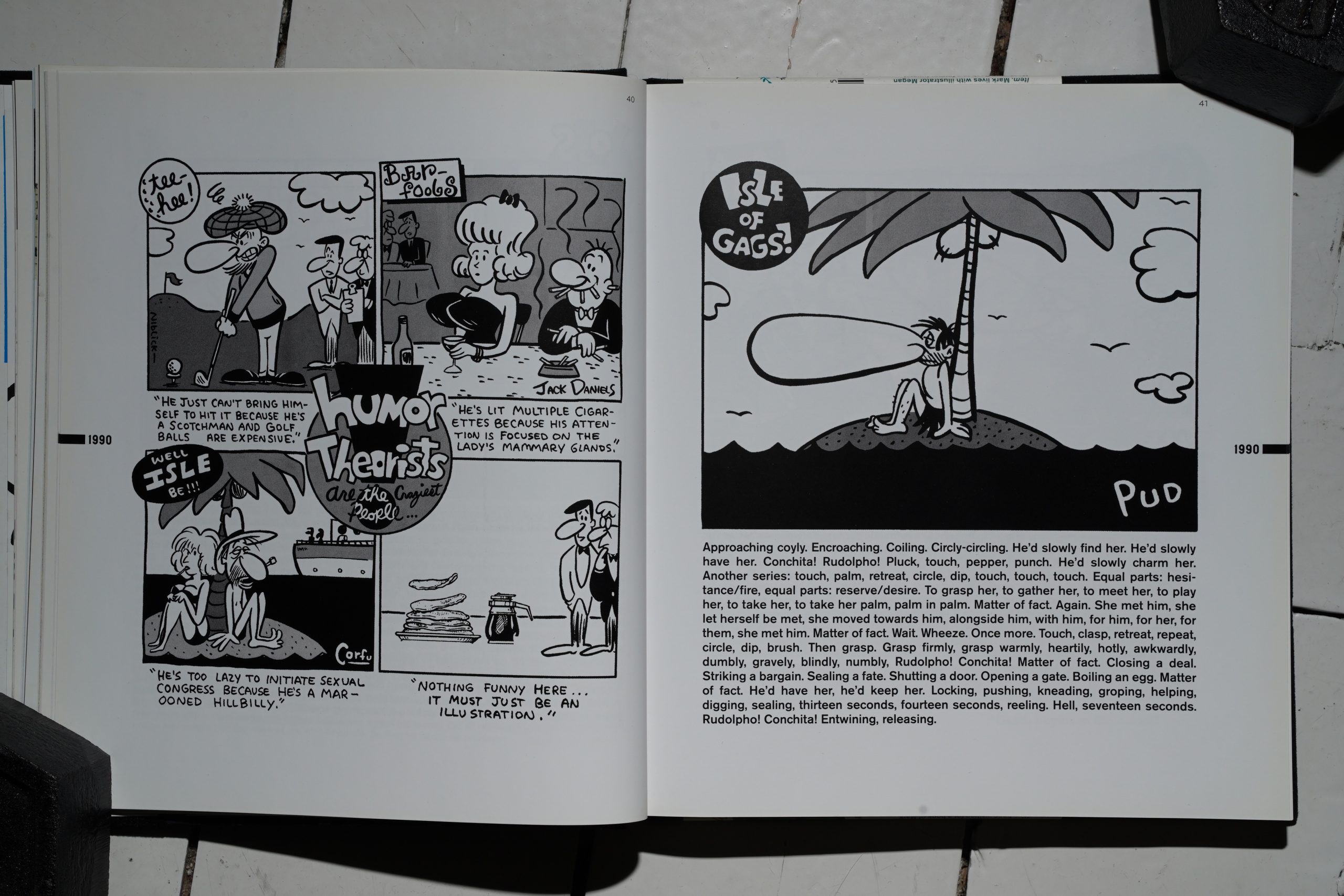 And then we get to the main part of the book, which is the weekly strip he did for New York Press in the early 90s. And… some of it’s amusing, but most of it’s just tedious. At least in the context of this book. 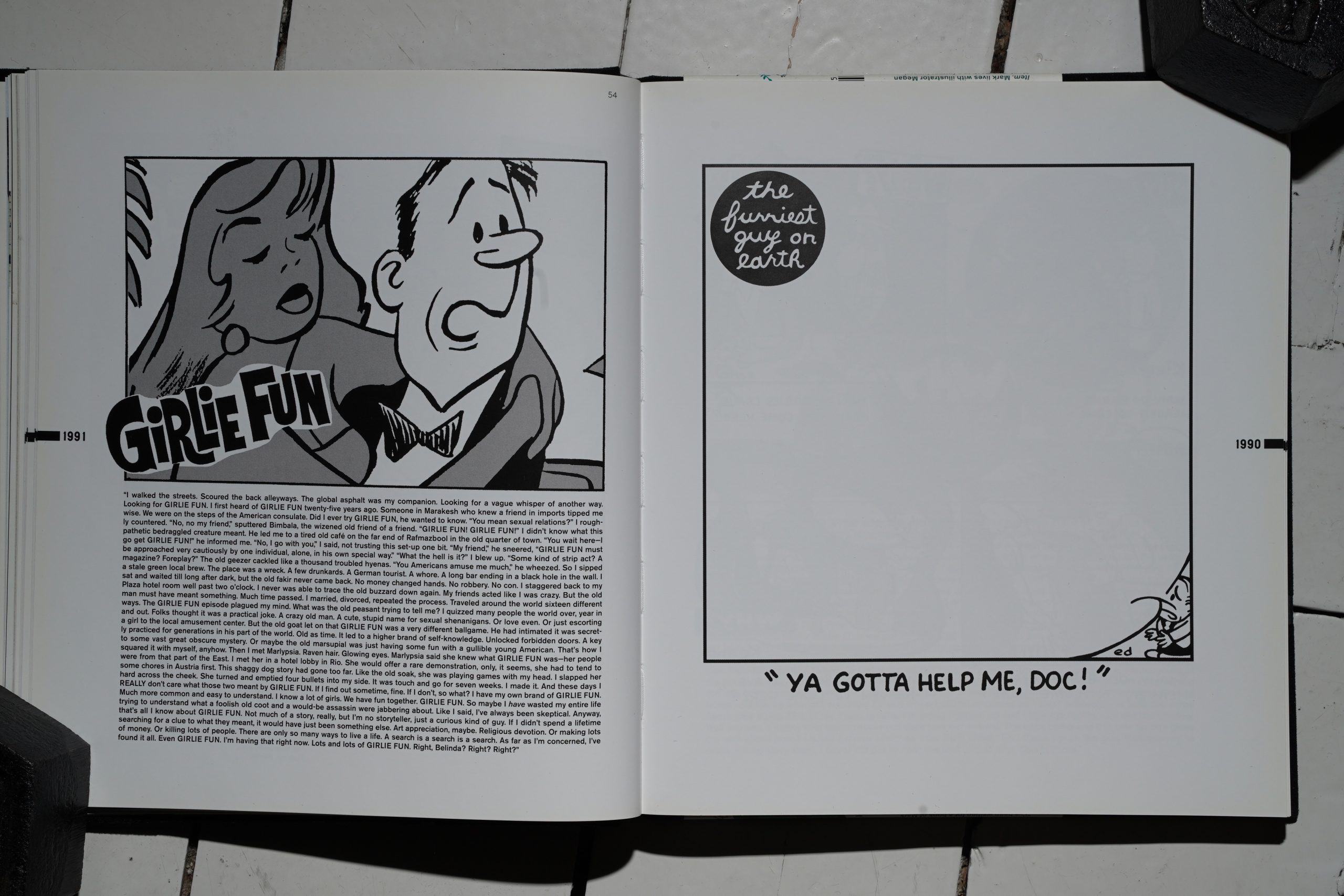 Perhaps it was a pleasantly surreal experience to stumble upon this in a newspaper, but the pay-off here is marginal. 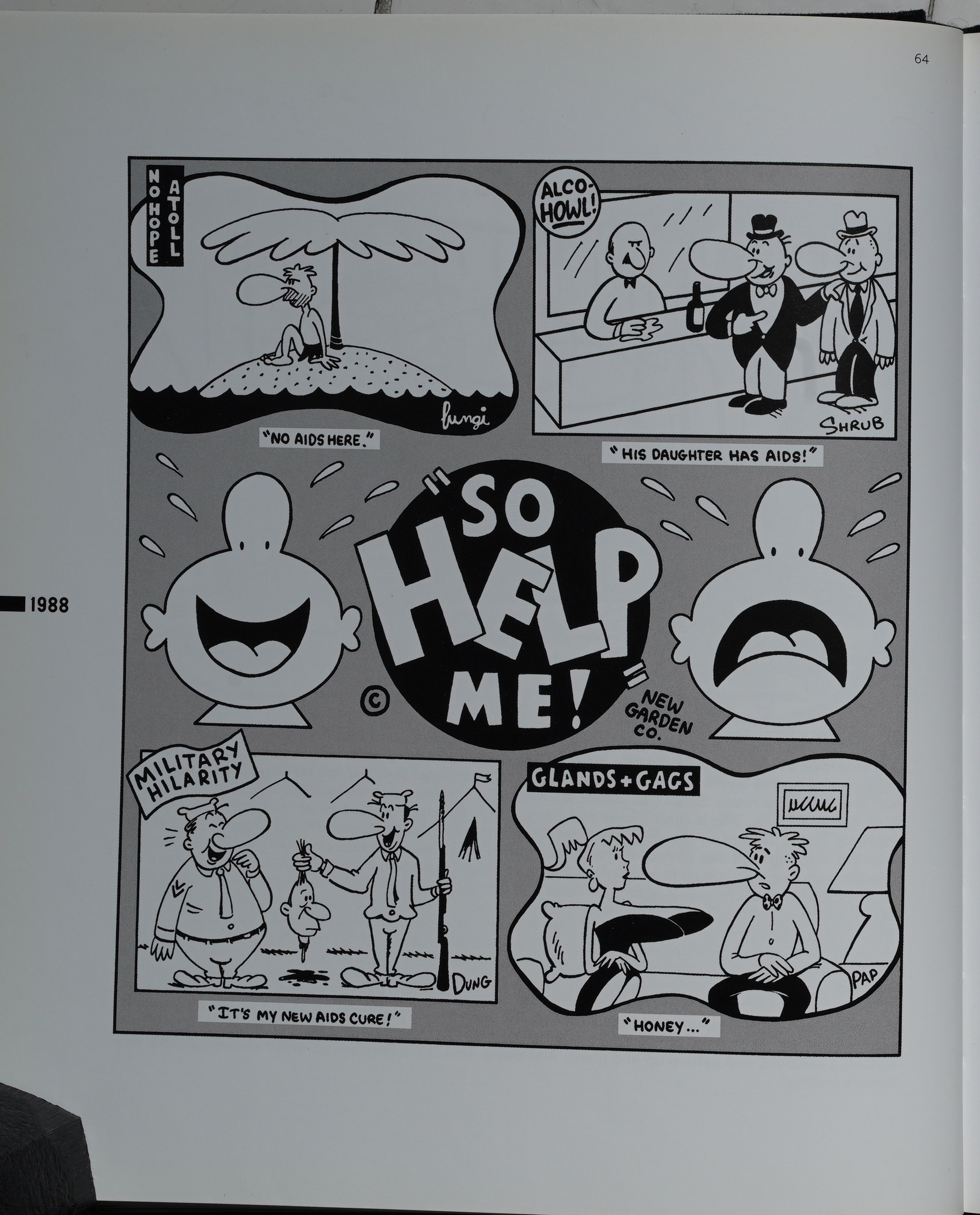 What? Only a single page of AIDS jokes? 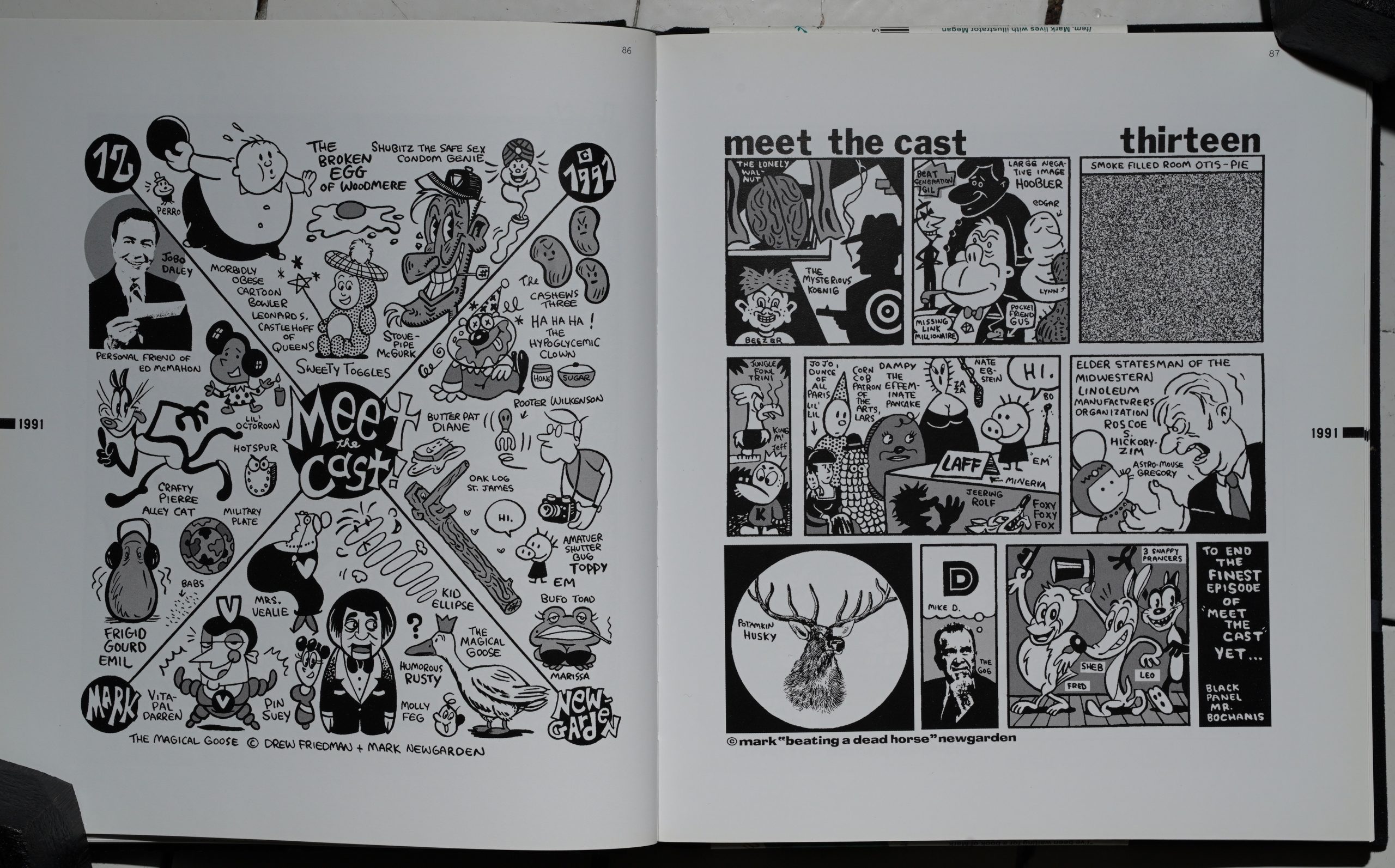 I mean… I think he’s going for pleasantly absurd slash scathing satire, but… 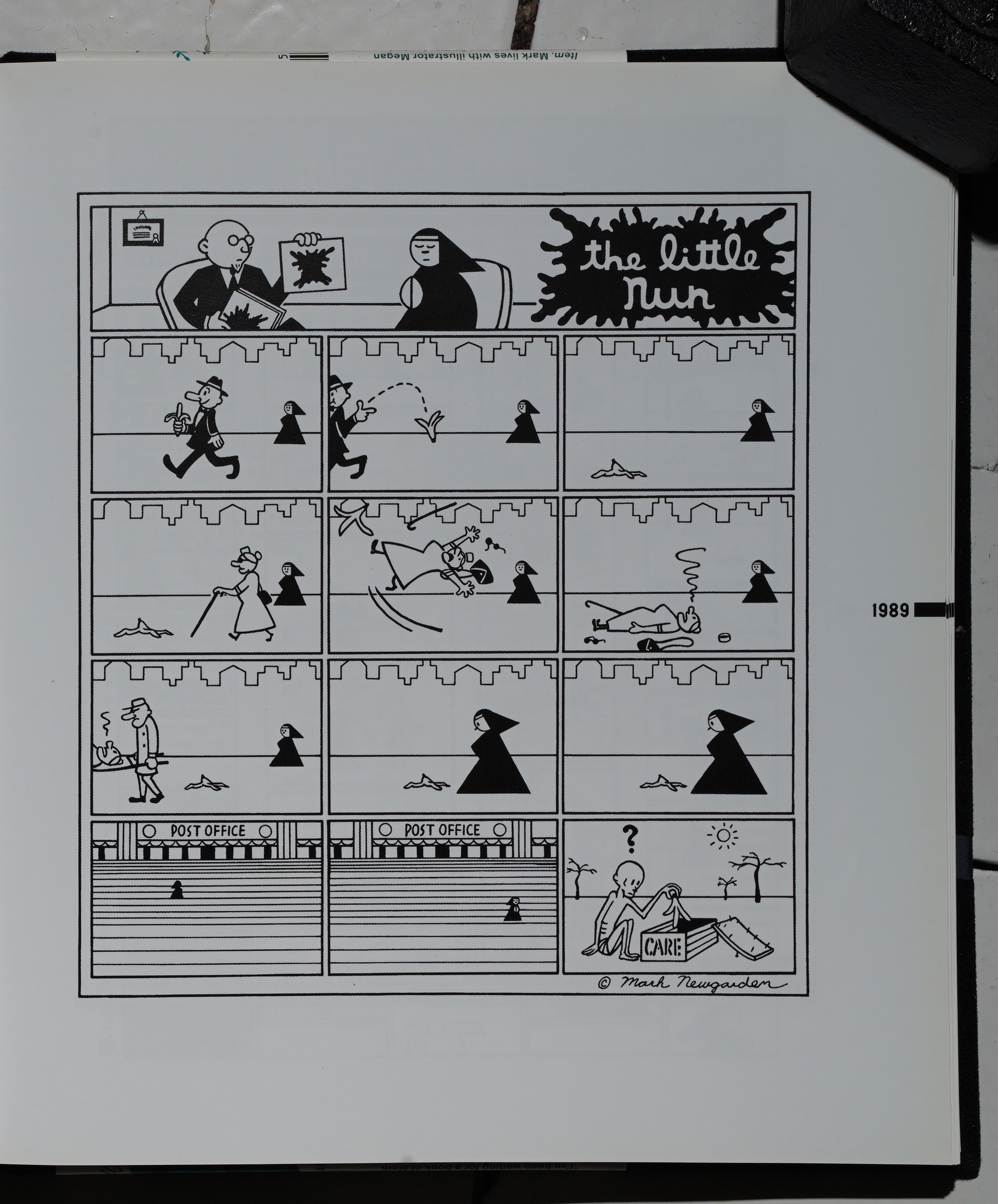 I don’t really know what to say. 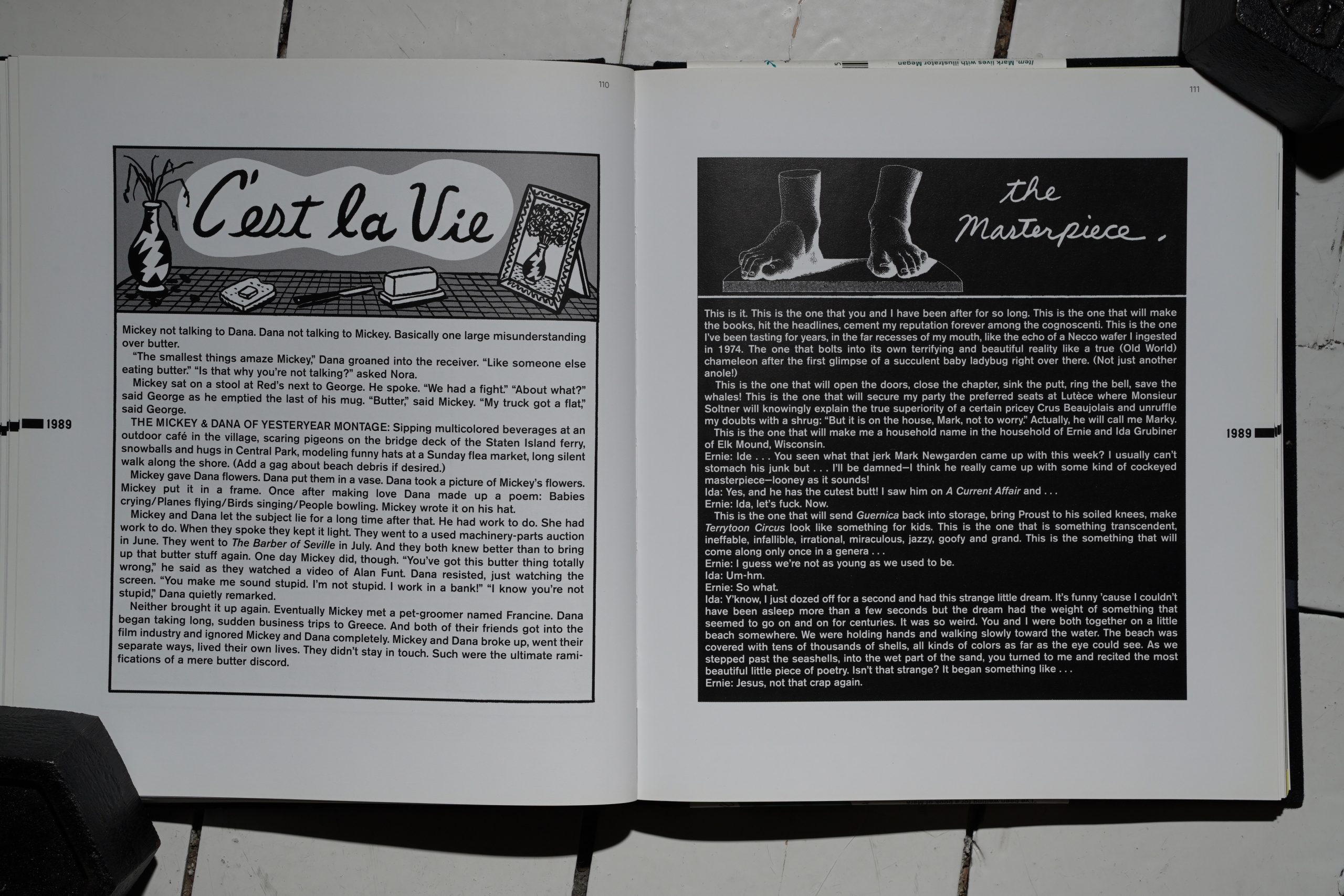 After reading a couple of these, it’s hard to not lose confidence. In interviews (which reviews parrot) he talks a lot about pain:

On Mr. Newgarden’s studio wall hangs what looks like a ruler. On closer inspection it turns out to be the Johns Hopkins Pain Rating Instrument, a plastic strip with a slider that a patient can move along a numbered scale to indicate how awful he feels. The scale ranges, in increments, from no pain to “worst pain imaginable.”

For Mr. Newgarden it serves as an existential barometer.

“It tends to stay on worst pain imaginable,” he said. On cue he laughed. Uproariously.

In his late-80s work, the pieces had huge emotional resonance. I just don’t see it in these pages. 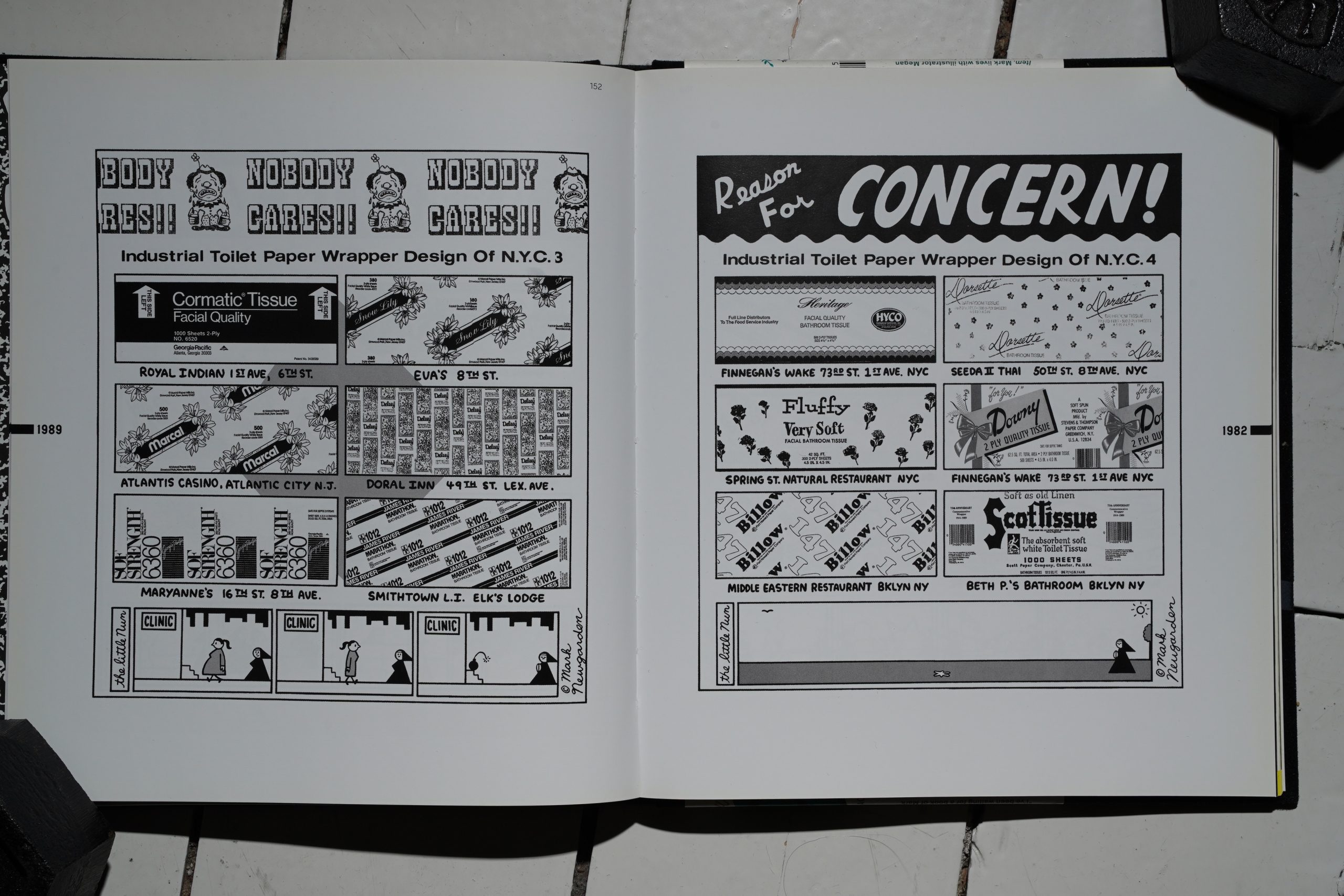 At least the strips that print toilet paper wrappings (there’s twelve of these pages) are more directly confrontational.

(For some reason, New York Press cancelled the strip shortly after.) 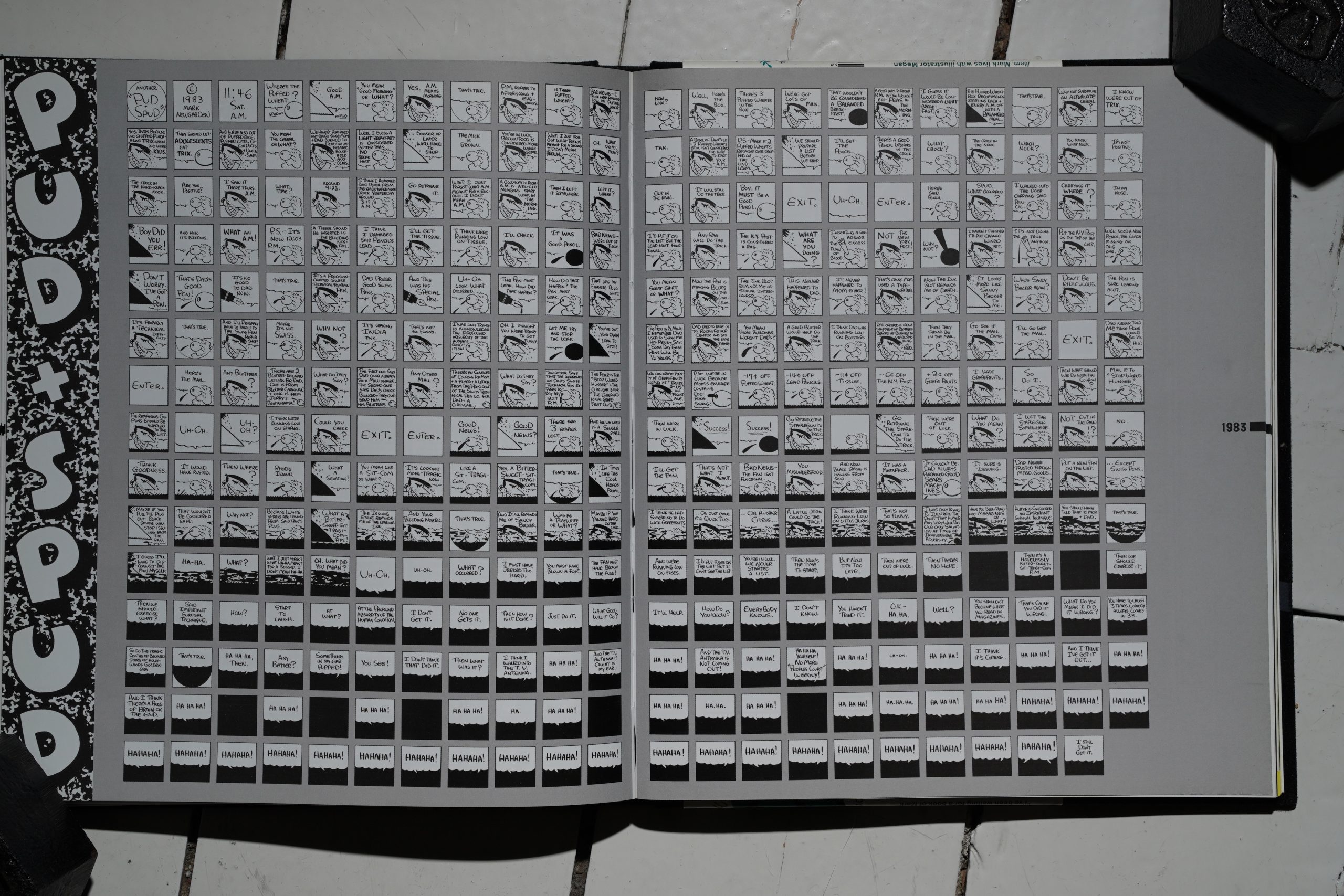 But this book reprints all the hits, of course, like Pud + Spud… but shrunk down. I mean, I like the graphic quality of this, but it’s a pain to read. 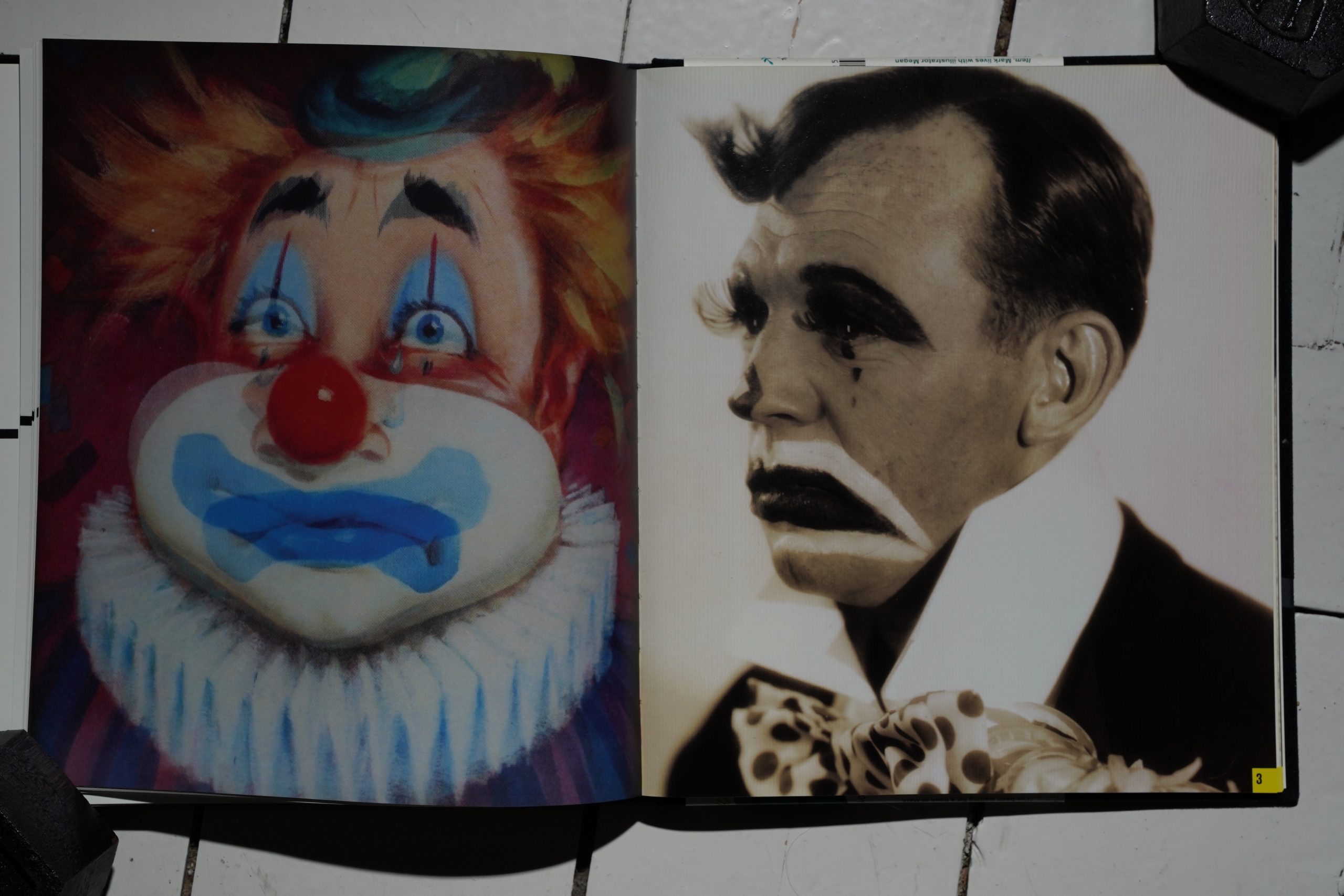 And then we finally get 40 pages of Newgarden influences. 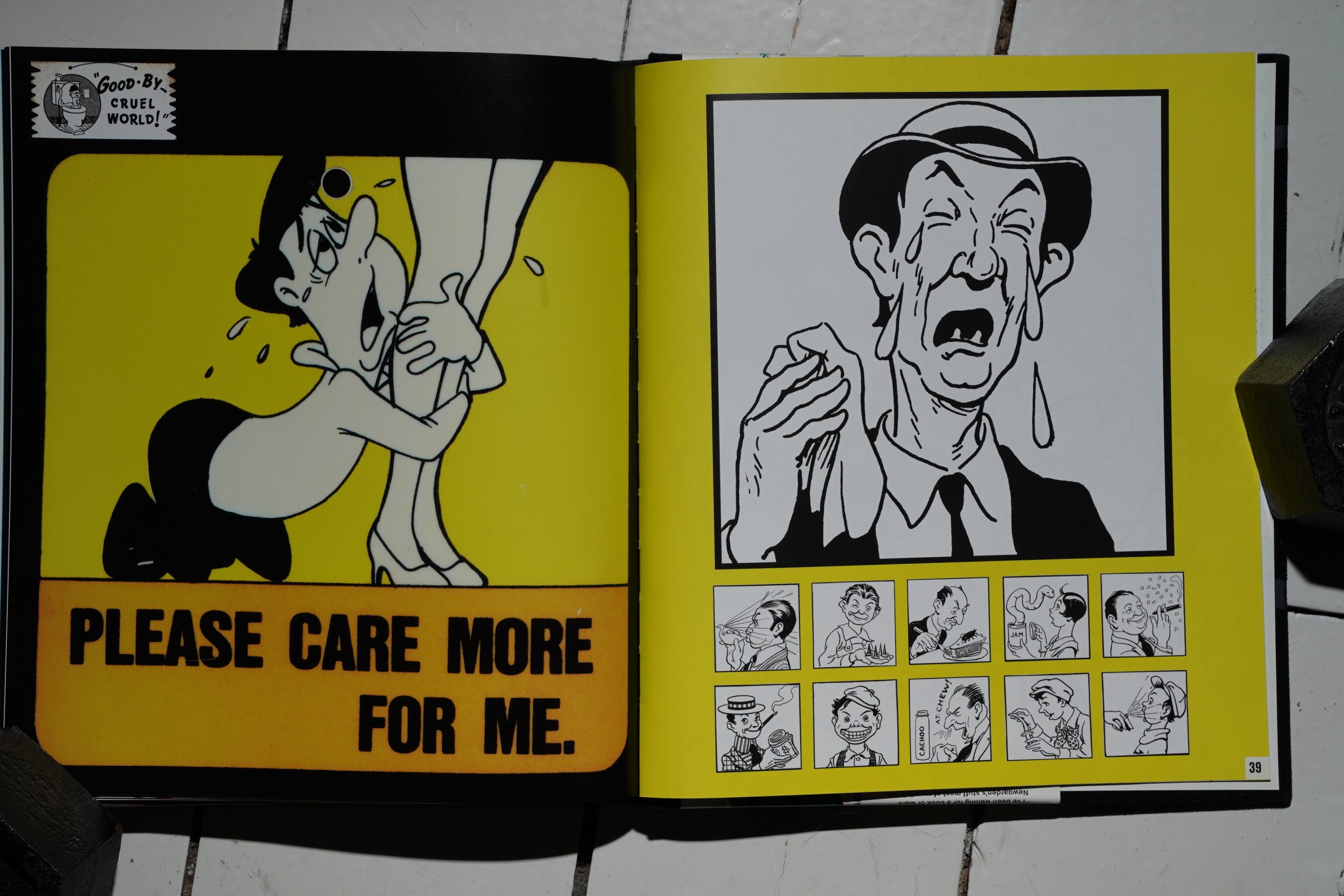 Putting this book together was probably a lot of fun.

Reading it — not so much.

I think they liked it:

Archetypes of American wholesomeness are paired with philosophical musings on the meaning of life and death—a coupling that jolts the viewer out of complacency and urges them to investigate the subtext of our omnipresent banal surroundings. That’s one way to describe the book; the other is to label it “by the guy who created the Garbage Pail Kids,” and let readers discover the true subversion for themselves.

The drawings here work perfectly as quickie cartoons, but they also extend themselves, turning into desperate, hysterical rants.. From an ad for the Little Nun’s stigmata gloves and edible rosary to an exhibition of real toilet paper wrappers, Newgarden treats nothing as sacred. In fact, he suspects that we cherish whatever distracts us from our problems. Beautifully produced—the covers are black velvet—this book shows the results of his study aren’t exactly comforting, but they are fascinating and funny as hell.