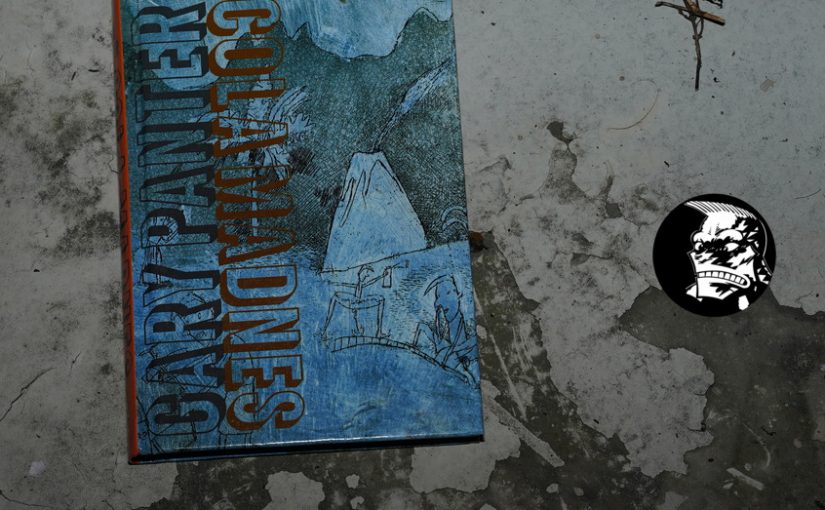 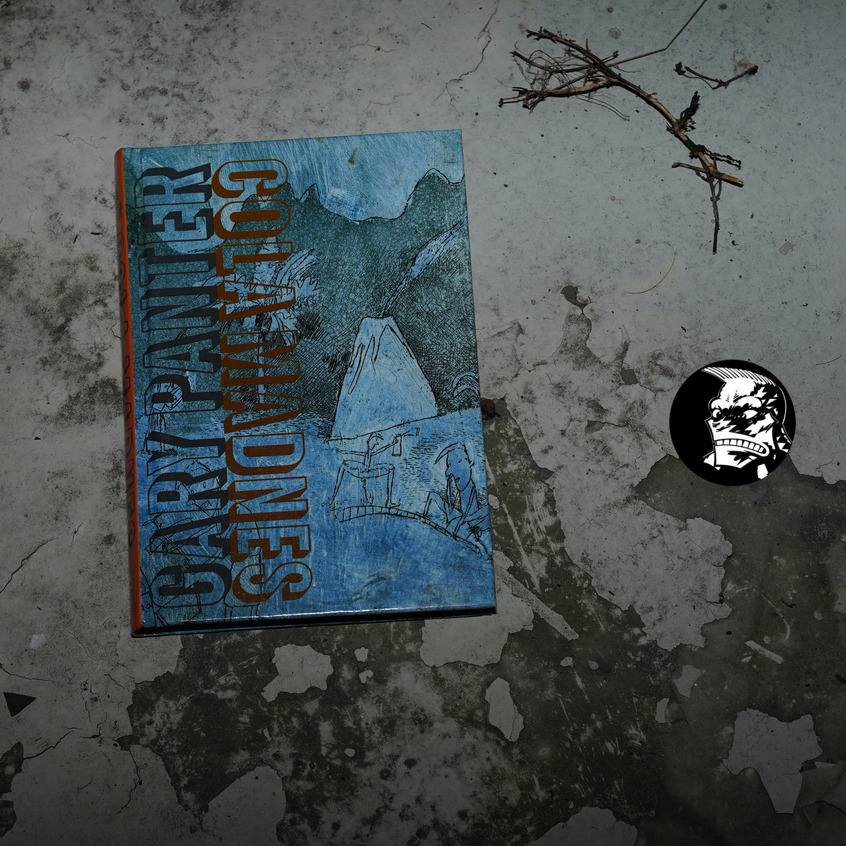 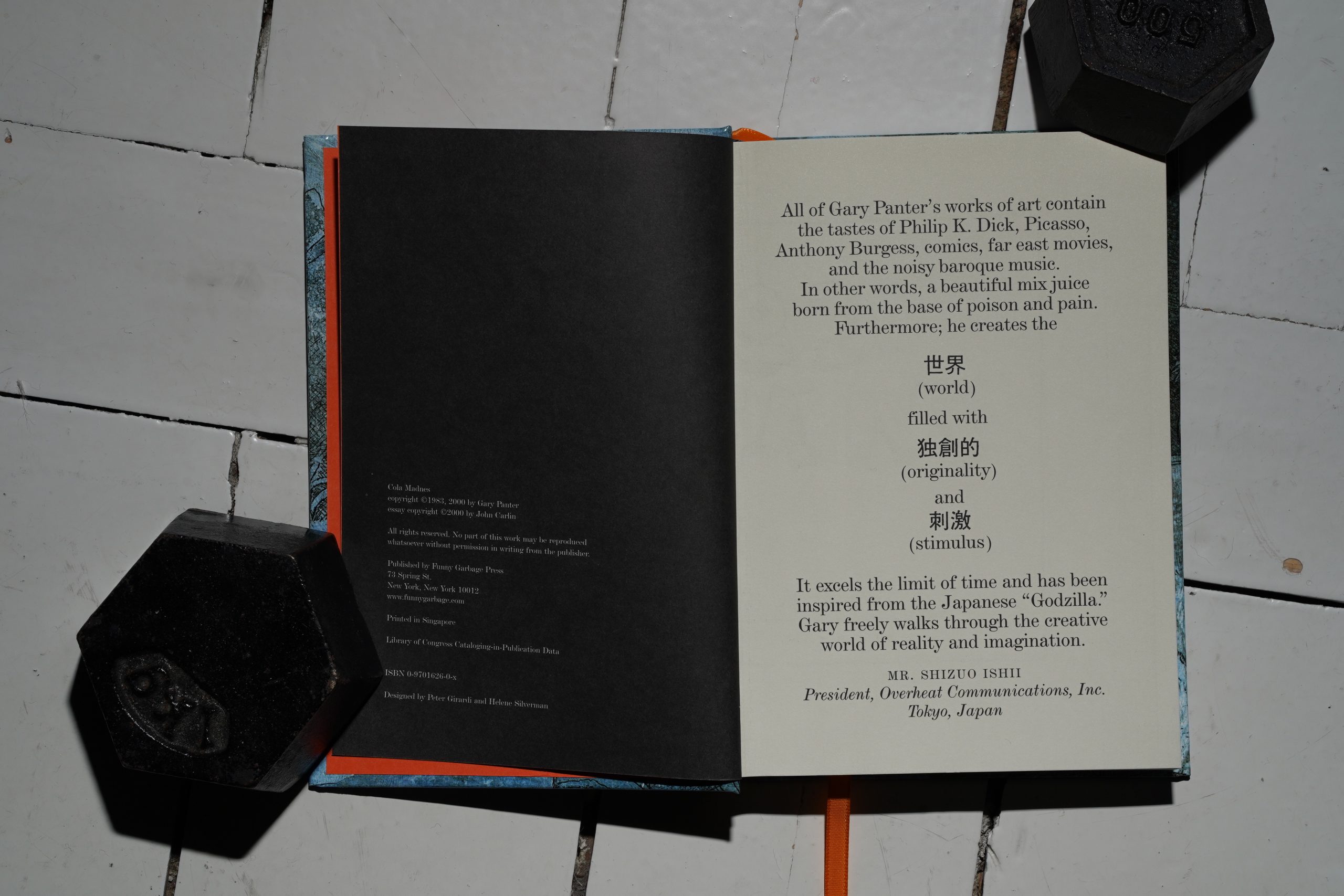 I’m always suspicious when I see stuff like this, but Overheat Communications really does seem to exist. 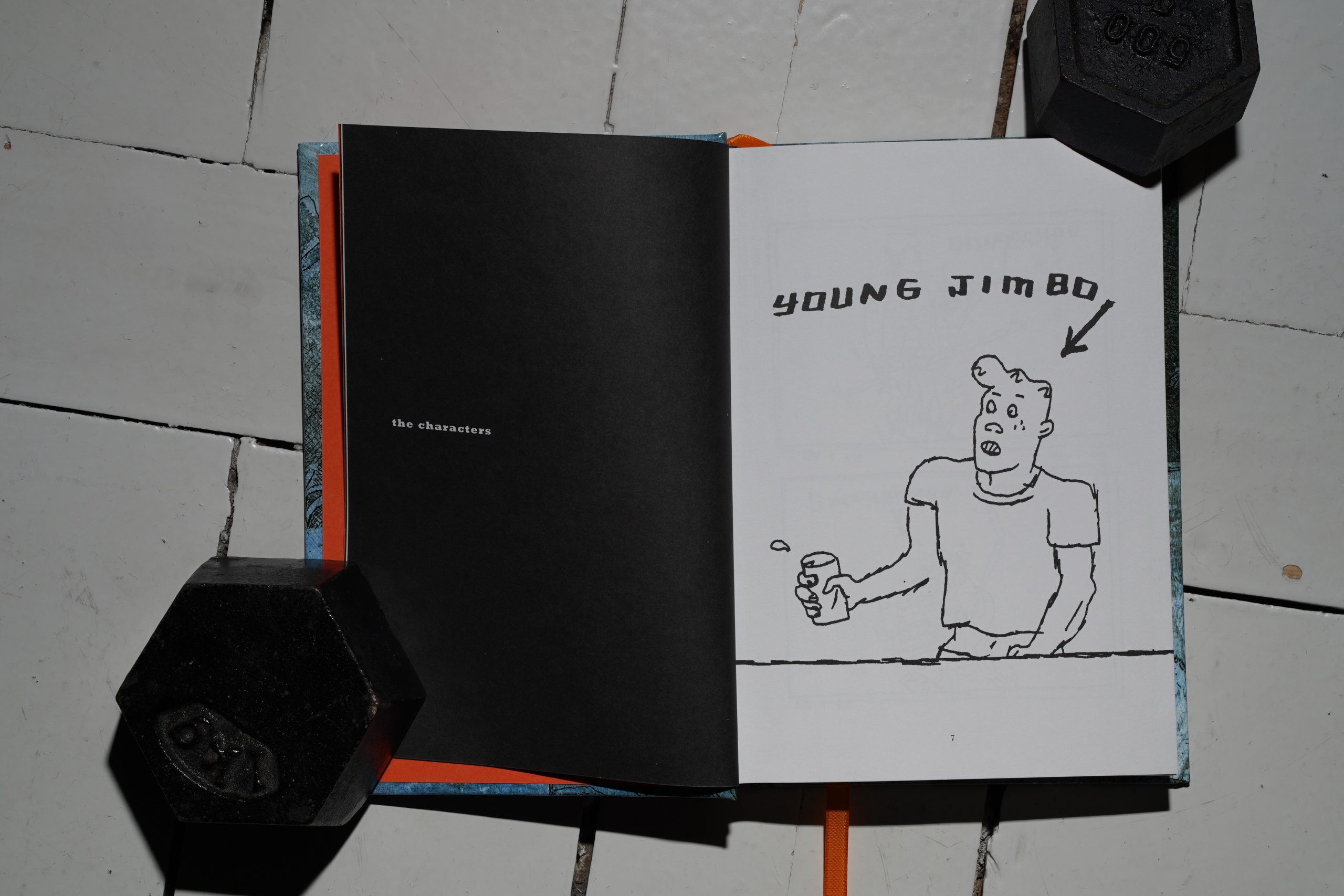 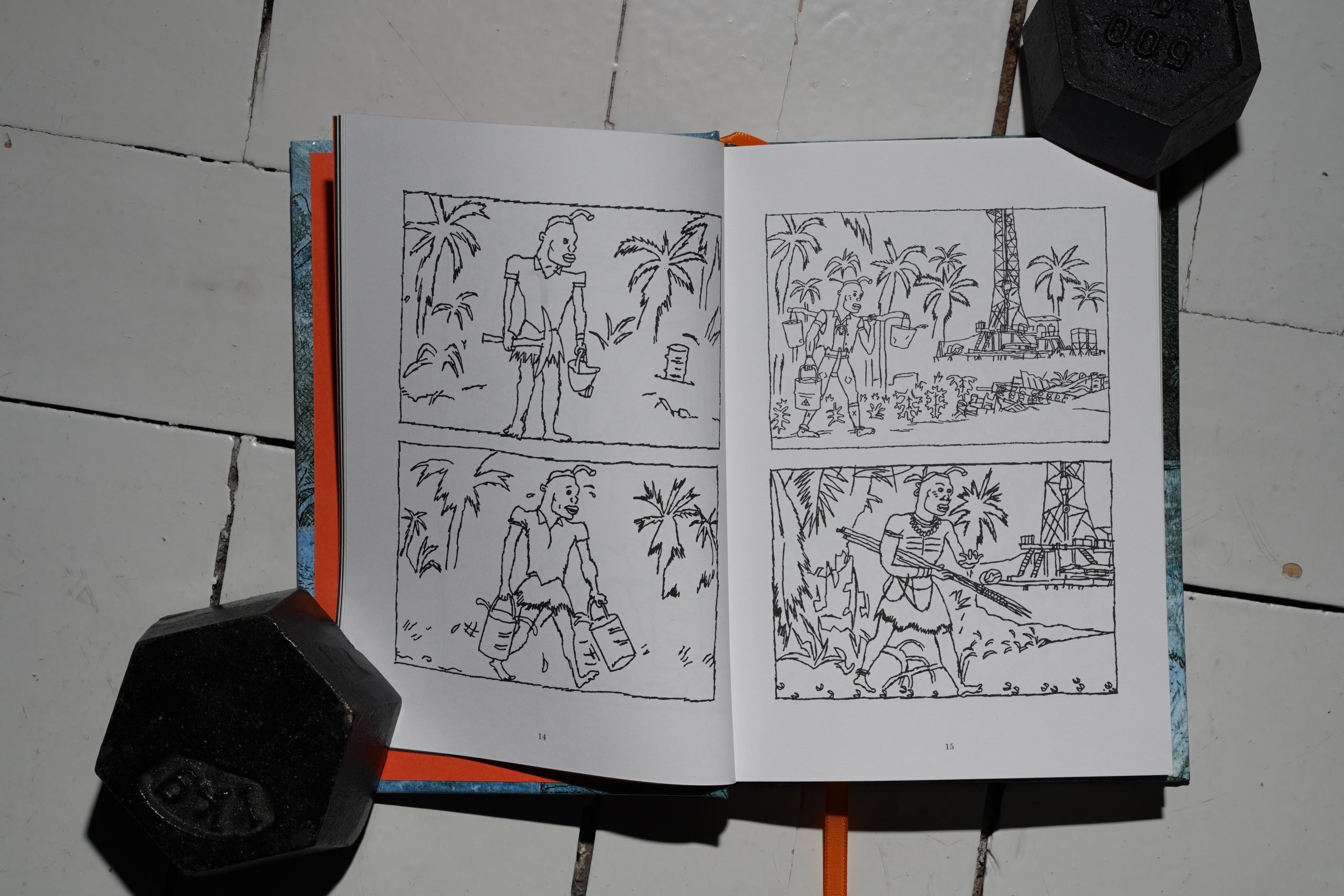 Anyway, this is a very handsome little book, published by Funny Garbage Press. (No, me neither.) The reproduction is excellent, and the format is sympathetic to the work. 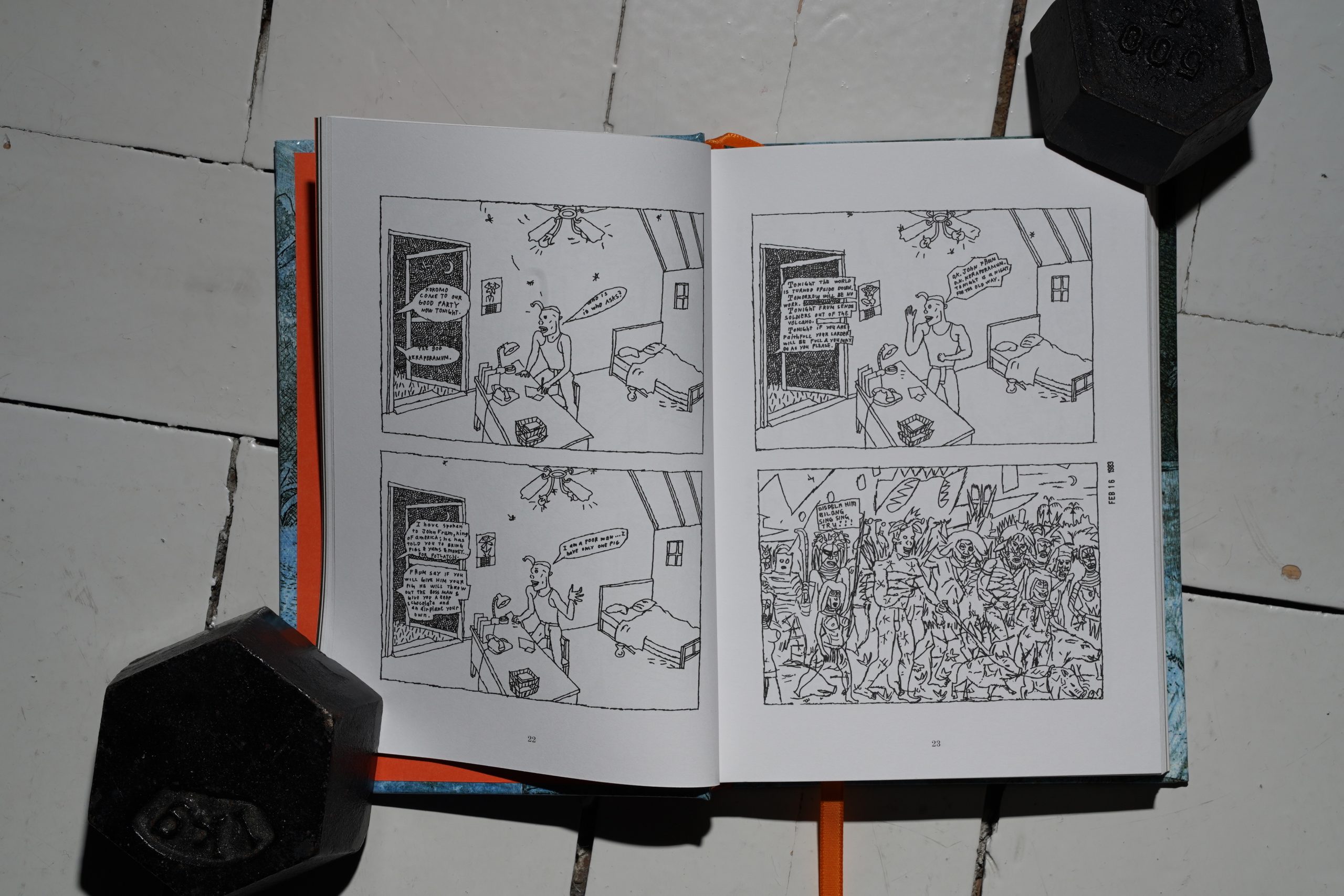 On the other hand, I wouldn’t really have minded this being a bit bigger. Or I should get new glasses. 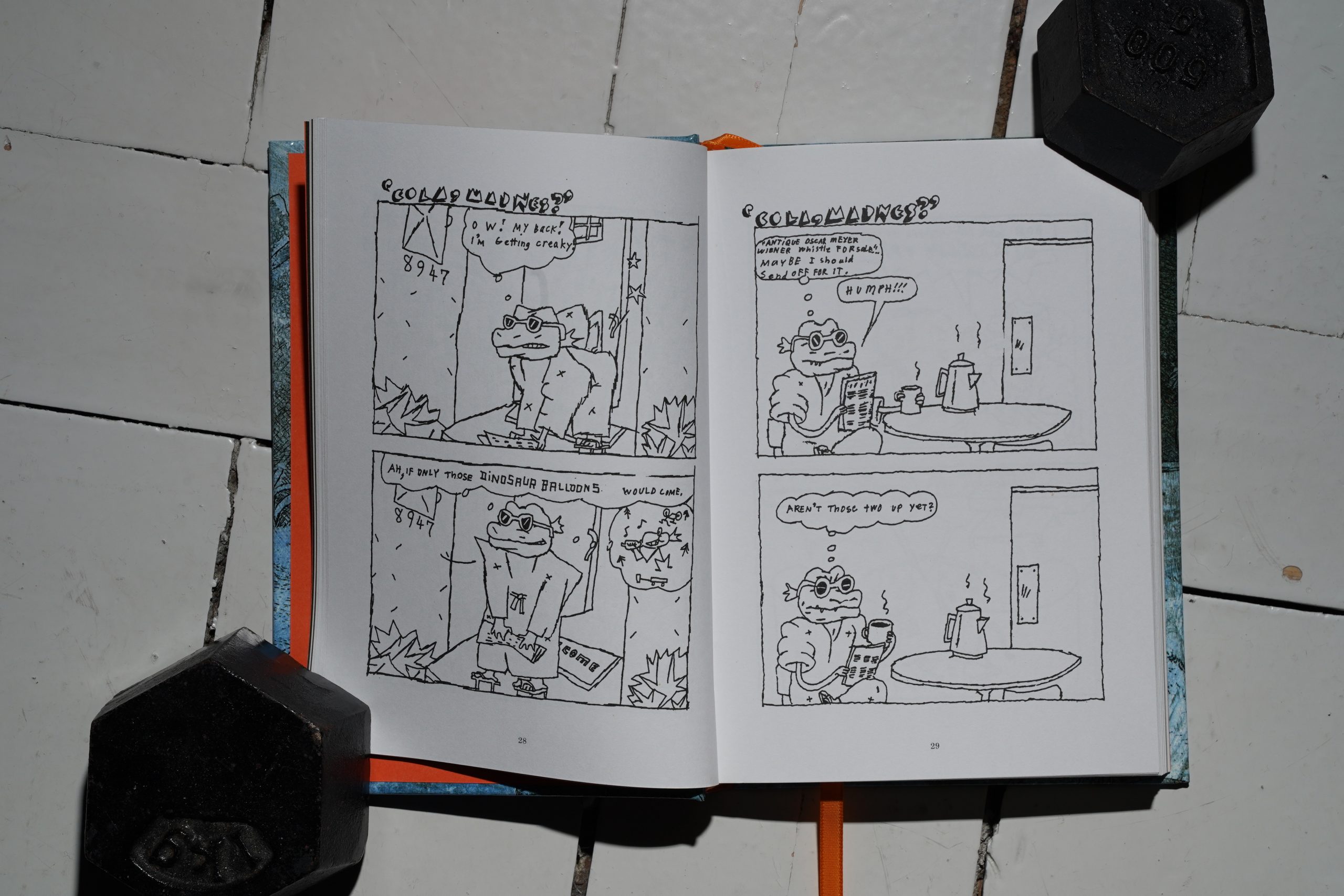 I wasn’t quite sure what to expect here, but whatever it was, it wasn’t this. I mean, I bought this when it was published, but I remembered zilch… 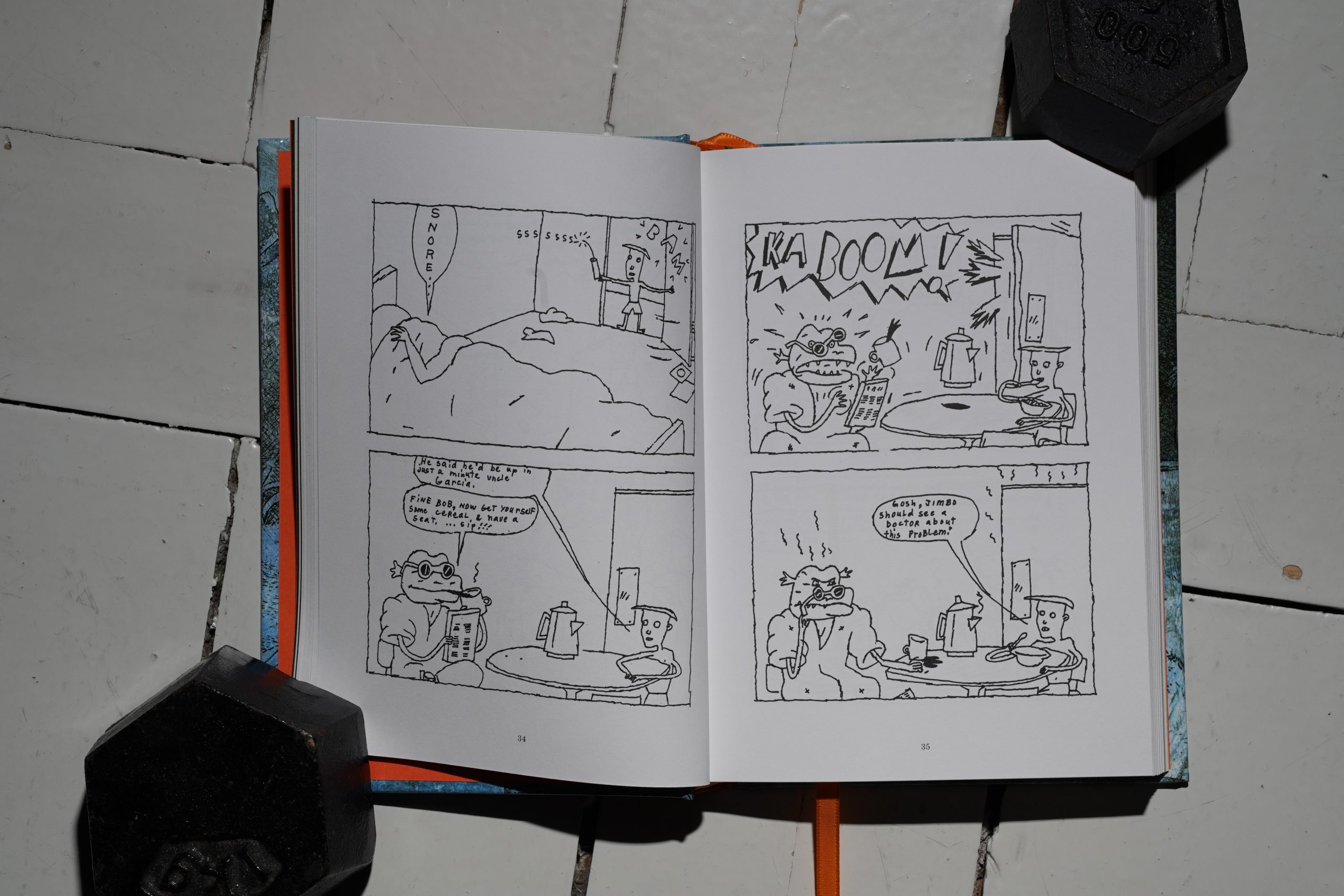 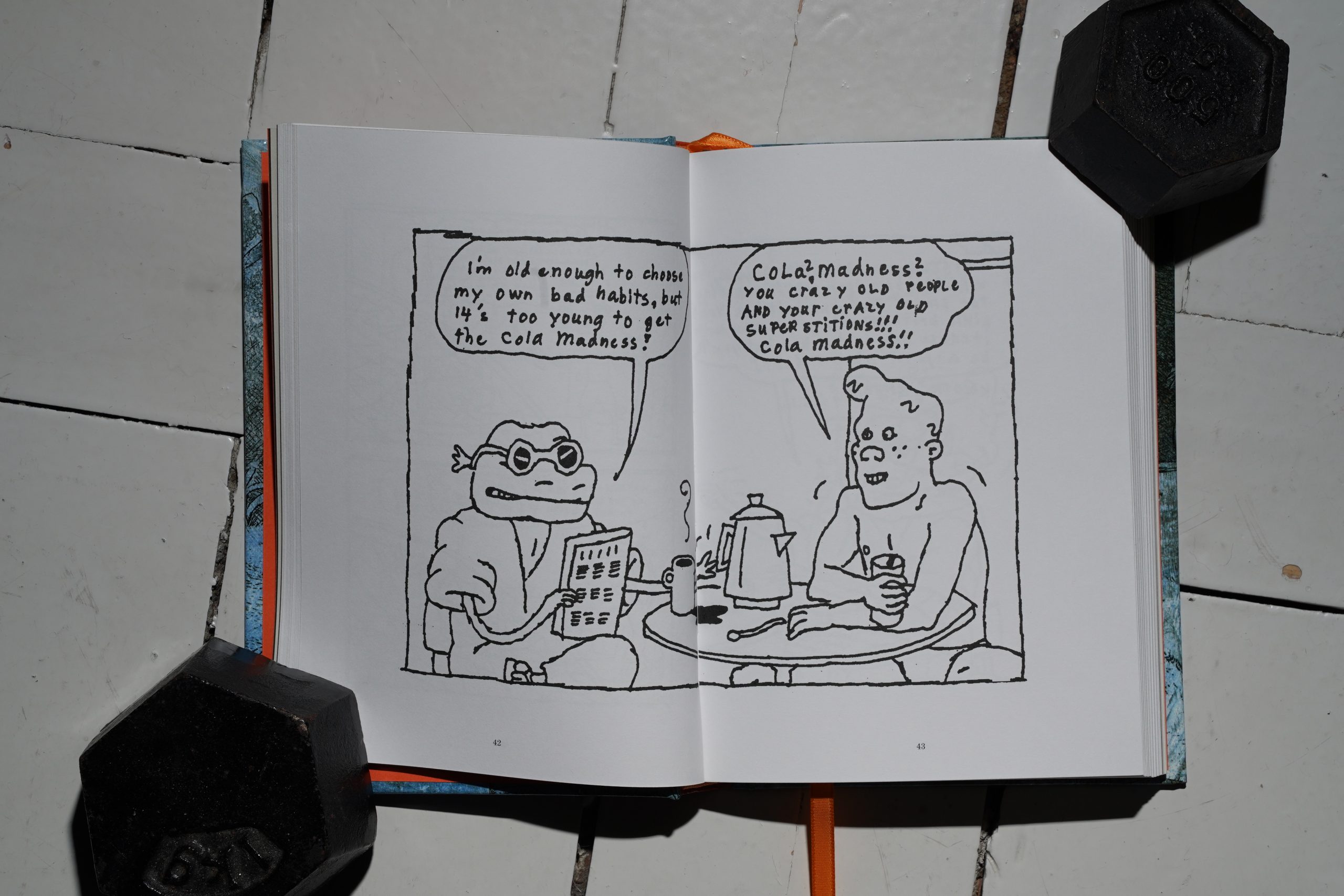 And the madness comes from drinking cola for breakfast. 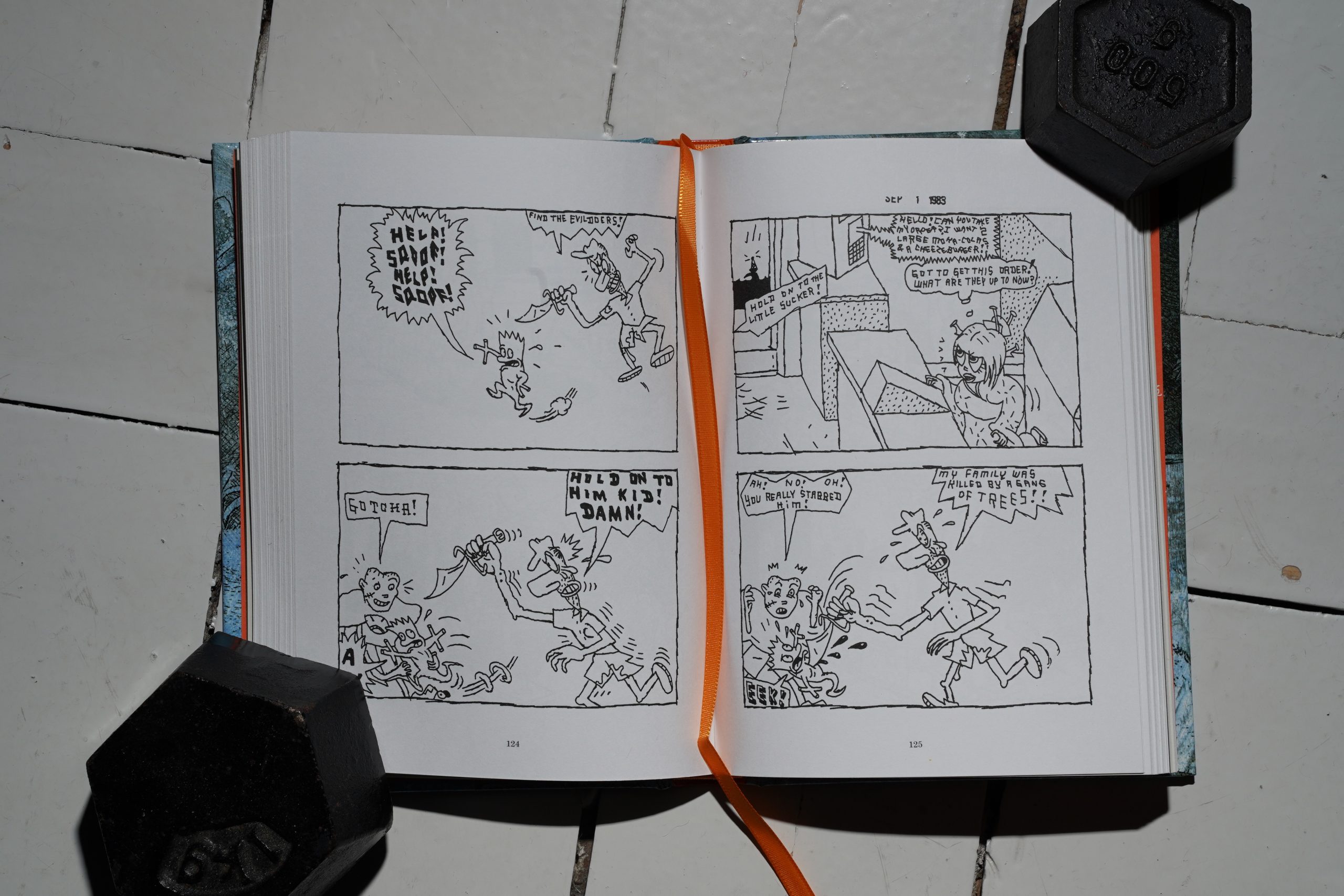 OK, things get more chaotic as the book progresses, and Panter adds half a dozen characters, but it has a really clear narrative. I totally expected it to disintegrate, but it’s a lot of fun. It’s not really… er… Panter’s most heartfelt work, though.

It’s amazing how productive he was from the late 70s to around 84 — I think most of his collected work is from those years. 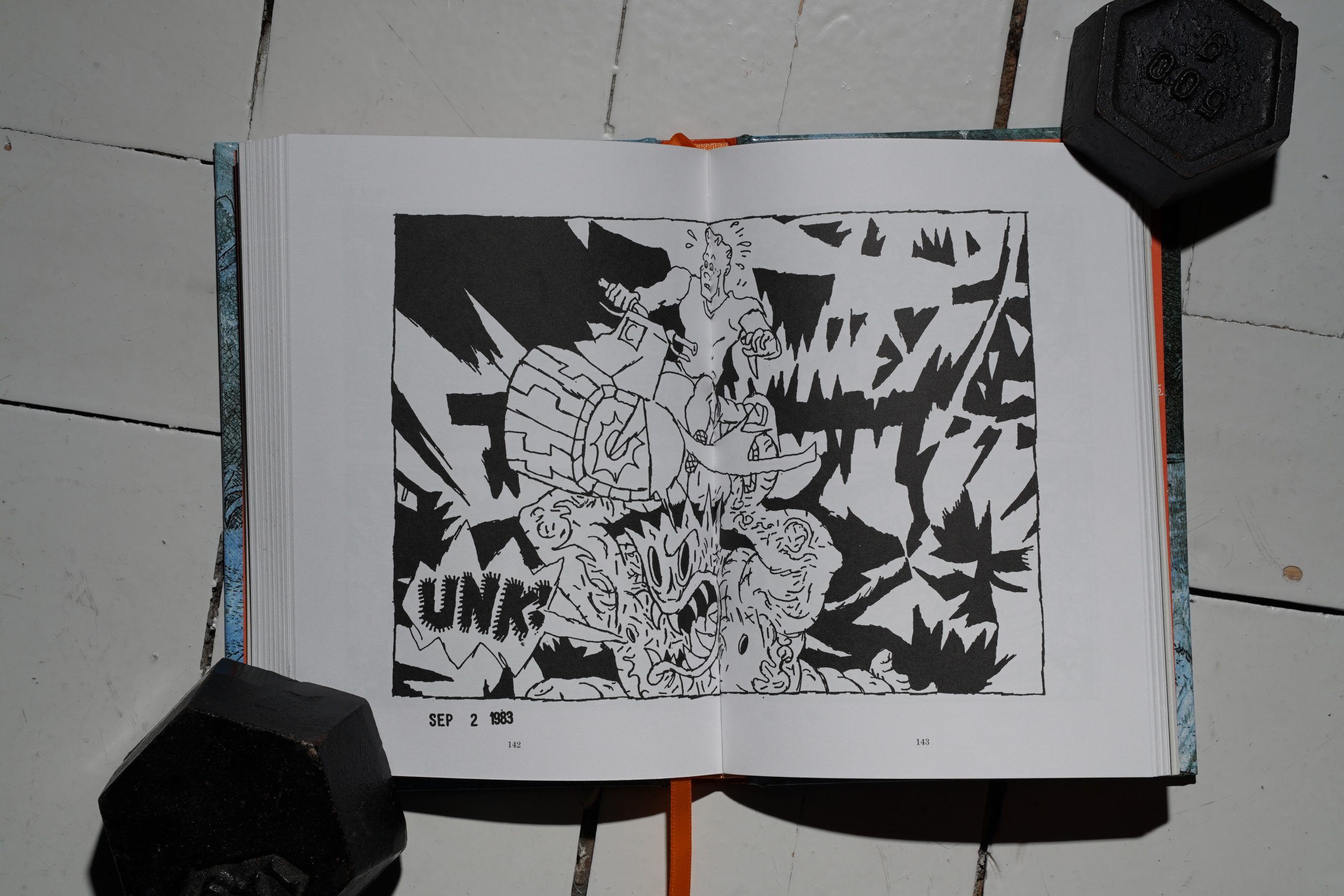 It’s understandable — those were awesome years.

I like that the book varies the size of the artwork in this way, but it doesn’t always quite work perfectly… 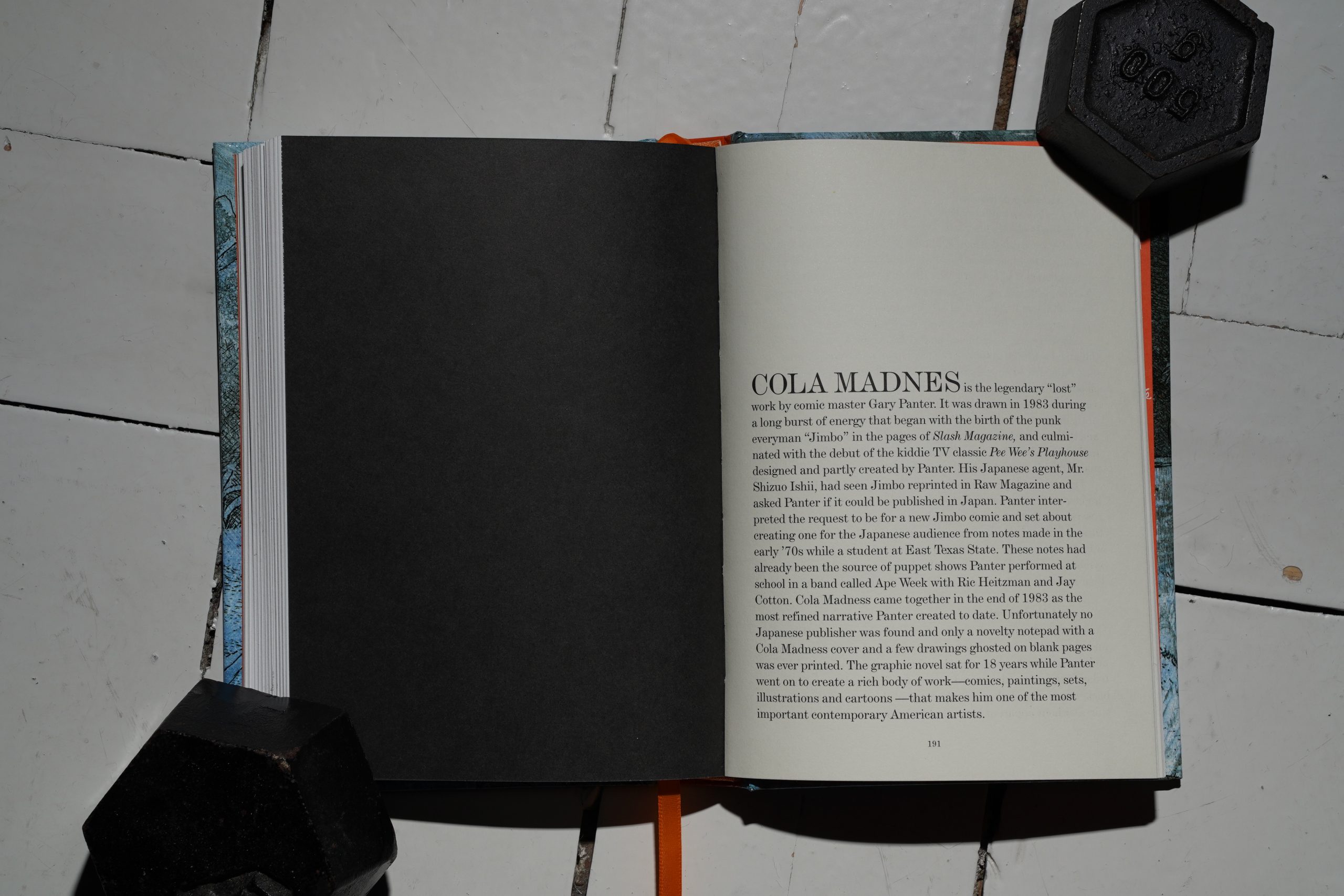 John Carlin writes adds an essay — he explains that Panter created this over a few months in 83, because he thought that a Japanese publisher wanted to print a new Jimbo book there. (But I guess they just wanted to reprint the first Jimbo book?) 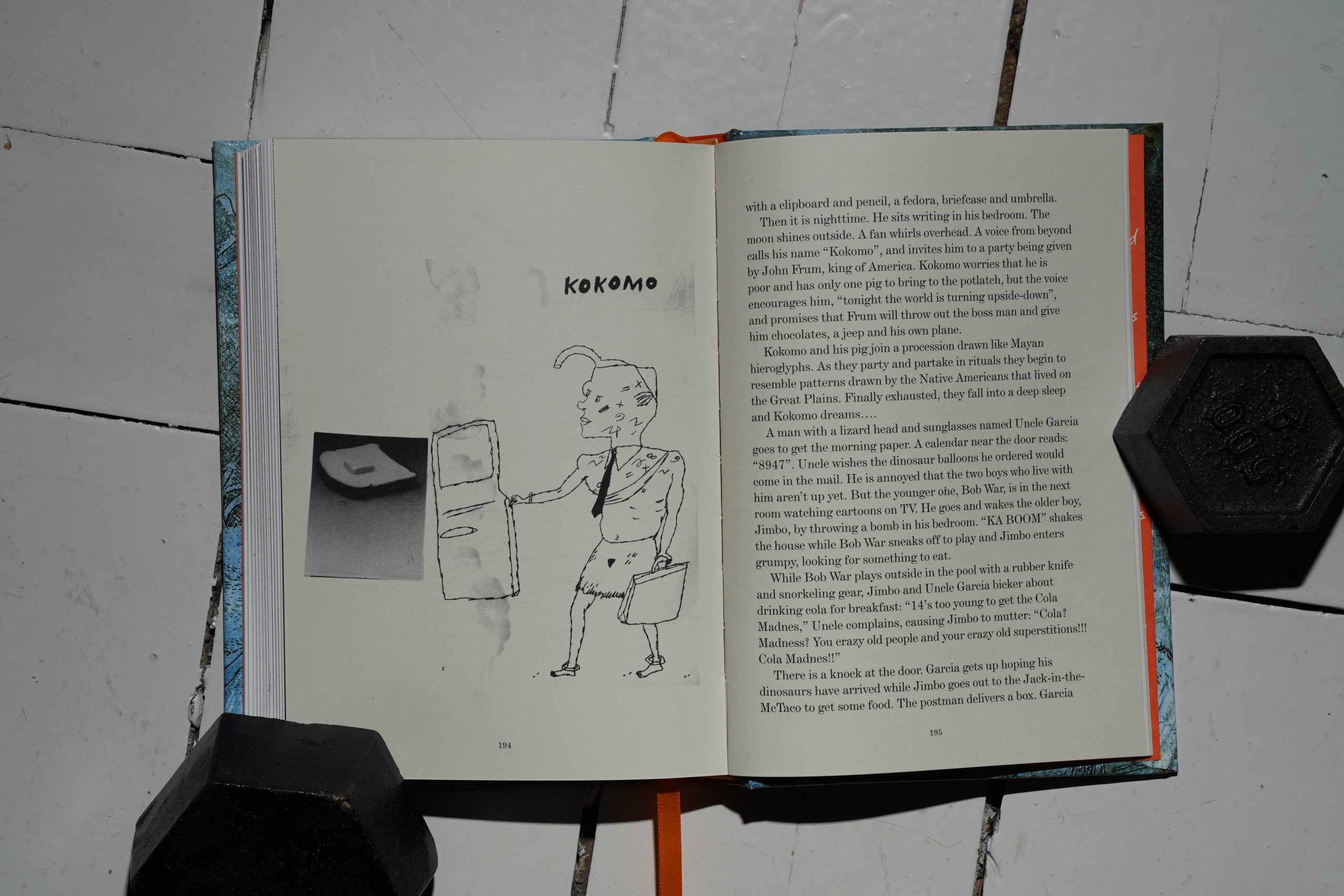 The essay recaps the plot (!) of the story over a few too many pages — which is a bizarre decision, since we’d just read the book, and the plot is perfectly clear and doesn’t need to be recapped. The rest of the essay is slightly more interesting.

LUCIANO: Do the Japanese understand
uork better than Americans?
PANTER: Oh no. I think my work’s really
interested in Japan. I’m interested in a lot
of different cultures. I think Japan is an
amazing culture. Thé fact that I’m in-
terested makes them have a look at me, to
see why I’m interested. The Japanese are
really interested in the rest of the world. I
think they may be somewhat disappointed
that the rest of the world is so self-absorbed
and not as interested in the world as they
are. They really explore all the corners of
the world inside these gorgeous magazines
that they read on the trains. Amazing. It
was fun to be there, and I’d very much like
to go back. I wrote another book for Japan
called Cola, Madness,’ I started that one in
1975. It’s got Jimbo as a teen-ager in it.
LUCIANO: cola, Madness??
PANTER; Uh, huh, cola, It’s
30S drawings long, and it should be pub-
lished wifh two drawings to a page, so it
should be about 150 long. That’s pretty
long for me. It’s also more humorous and
more commercial-looking. Maybe not
“commercial-looking,” but the sensibility’s
more like K-Mart. Somewhere between
Beardsley and K-Mart.
LUCIANO: II-aughs/ That’s pretty funny, 1
have to admit.
PANTER: It’s really a design for a puppet
play. I haven’t really pushed that, but I
hope I can do a puppet play production of
it sometime.

The book was reviewed positively:

This delightfully inane story offers a selection of Panter’s themes: humanity’s troubled relationship with nature and technology; the tension between restraint and the uncontrollable urge; family relationships; and Jimbo’s endearing, comical self-doubt.