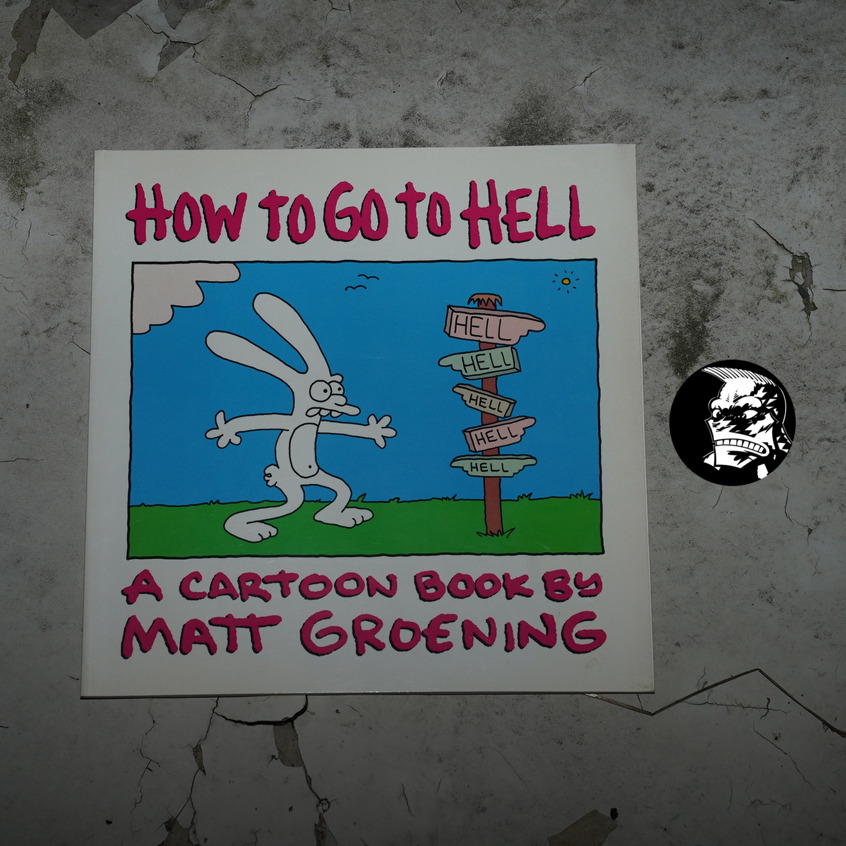 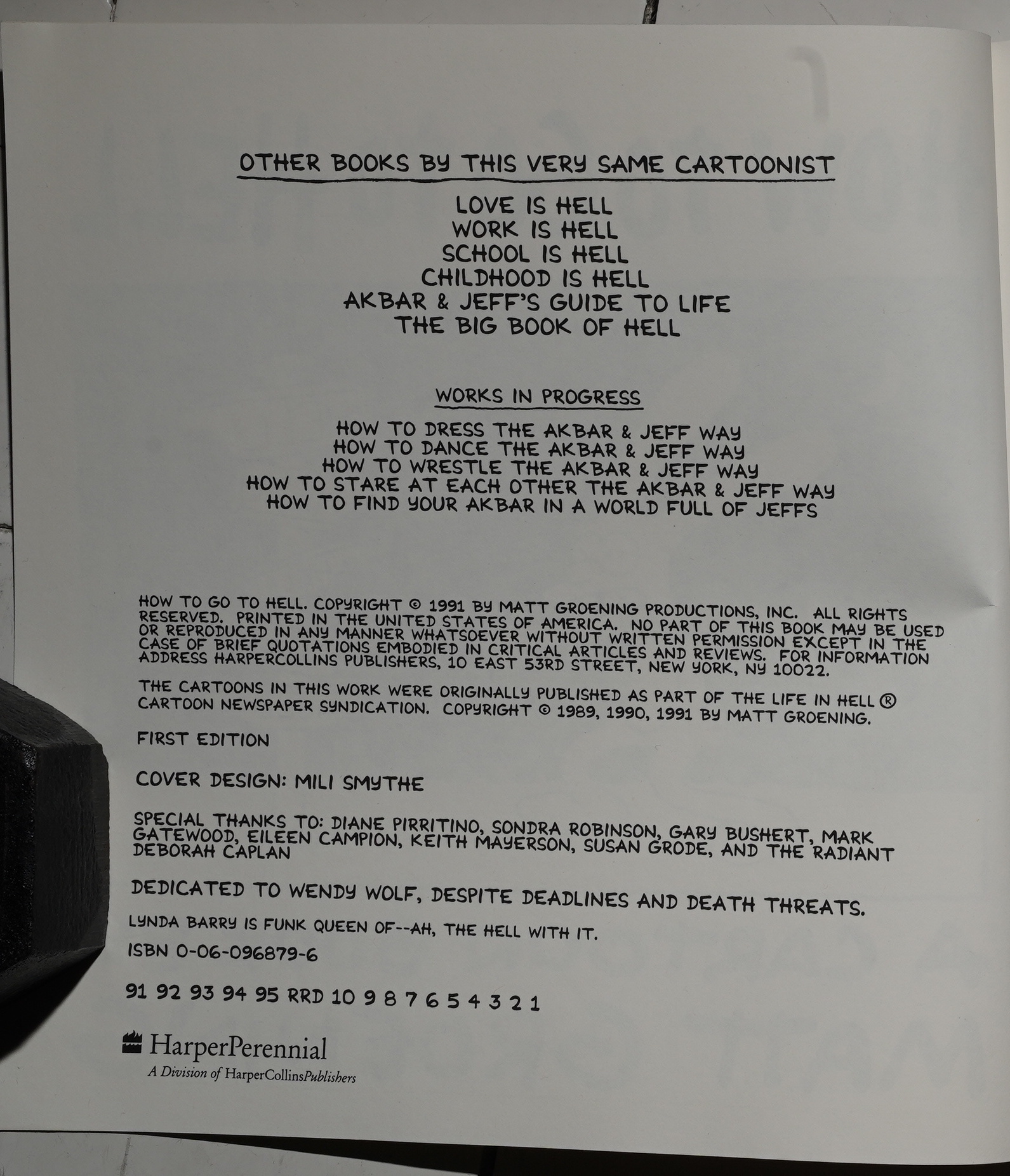 Big changes afoot — Groening has taken the book from Pantheon to HarperPerennial, and this is the first collection without staples. This is also the first collection that doesn’t dip back into deep Life In Hell history — all the strips are from recent years. And finally, there’s no theme at all, so this is more of a straight-up collection of recent strips.

And it’s also the first collection I didn’t buy myself at the time, so I’ve never read this myself before now. I don’t remember why I fell out of the habit of buying these? I mean, the previous collection (Akbar & Jeff’s Guide To Life) was totally spiffy? But I did. Was there a connection to the ubiquitousness of The Simpsons that turned me off? Sounds pretty odd to me, because I really liked The Simpsons (like everybody else).

Was it the lack of staples? Let’s go with that one. 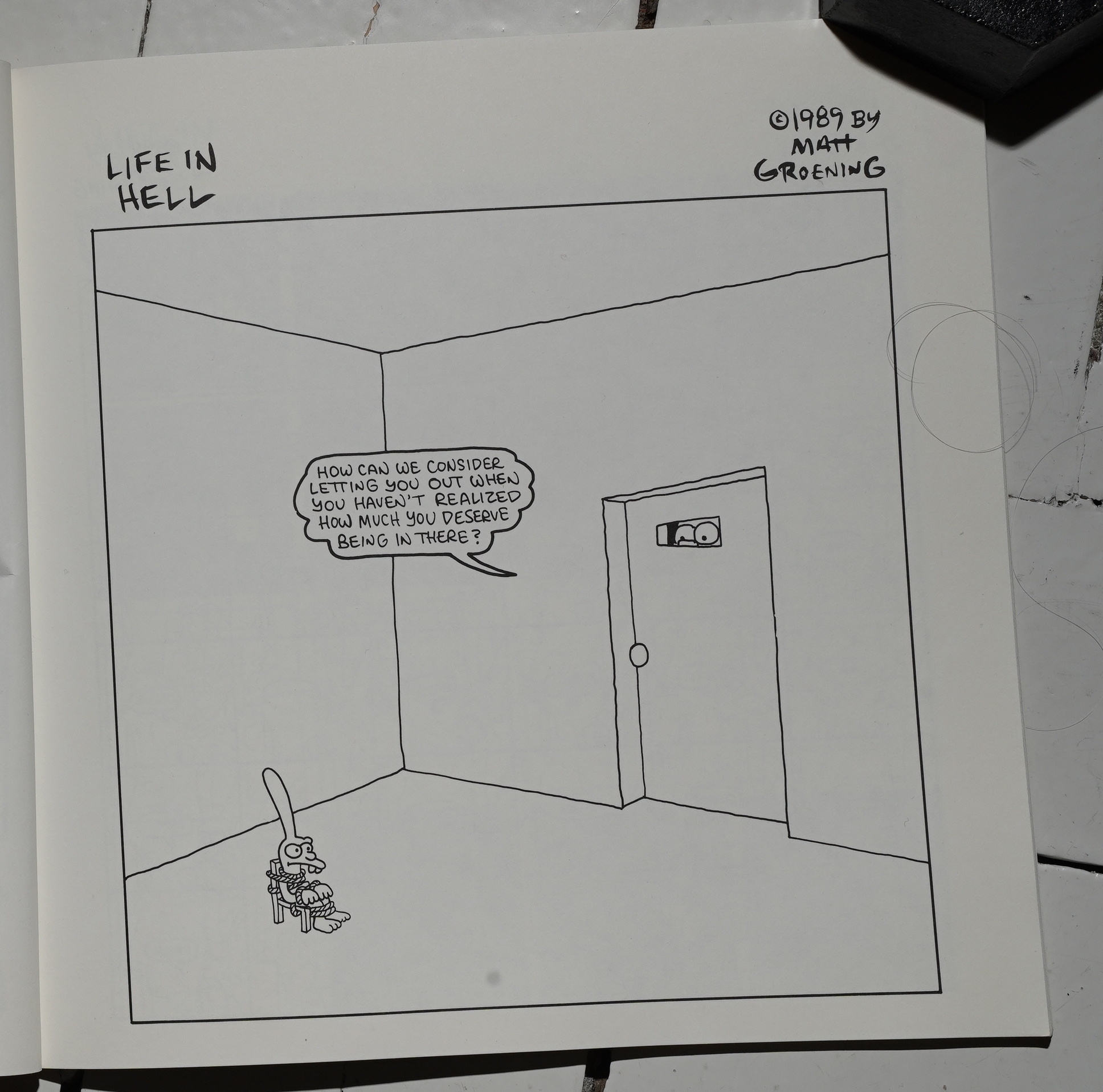 I should vacuum the floors. That’s hairy, dude.

Anyway, this is a lot less dense than previous collections — many of the strips are simple variations on a theme like this one. 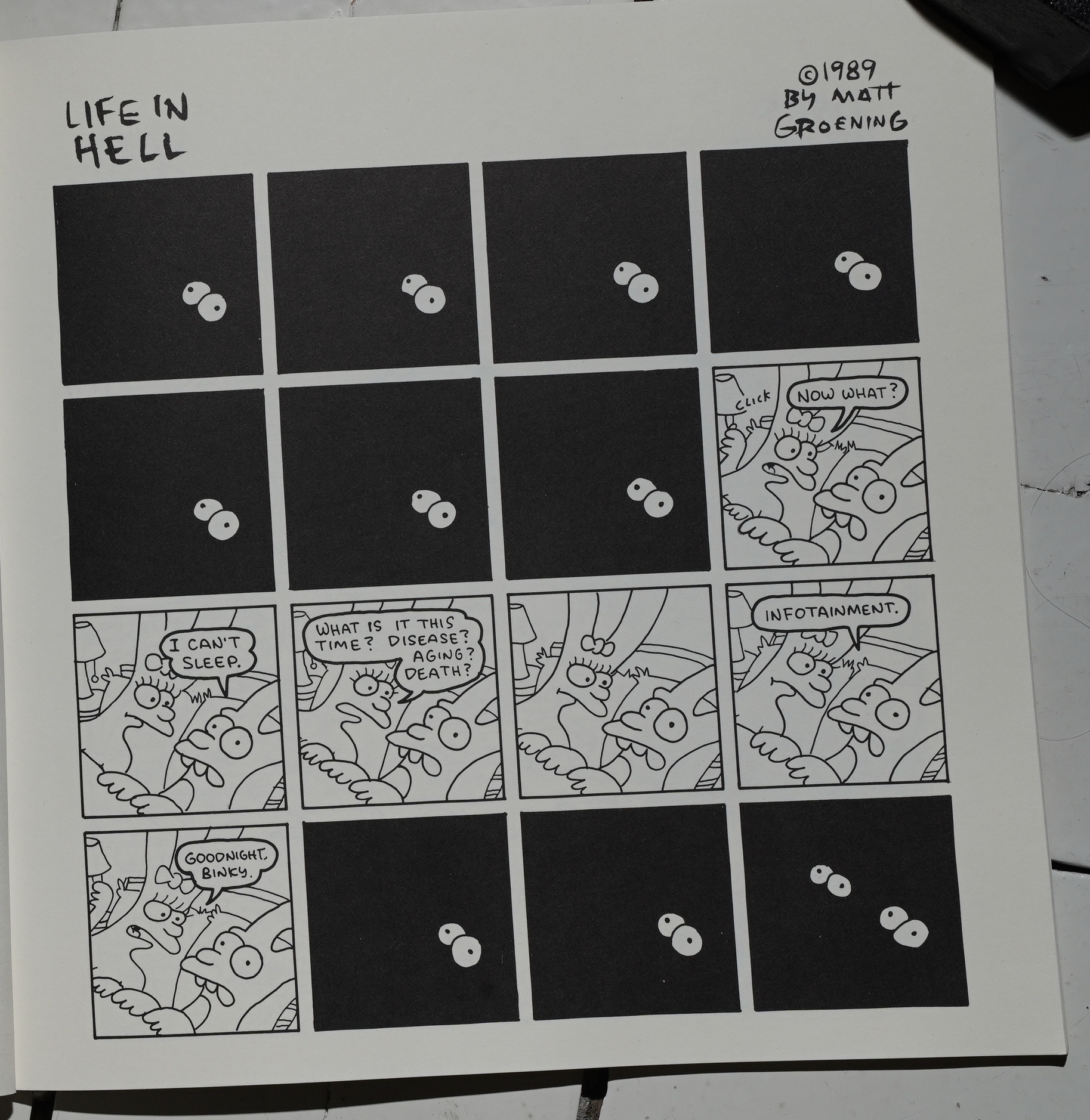 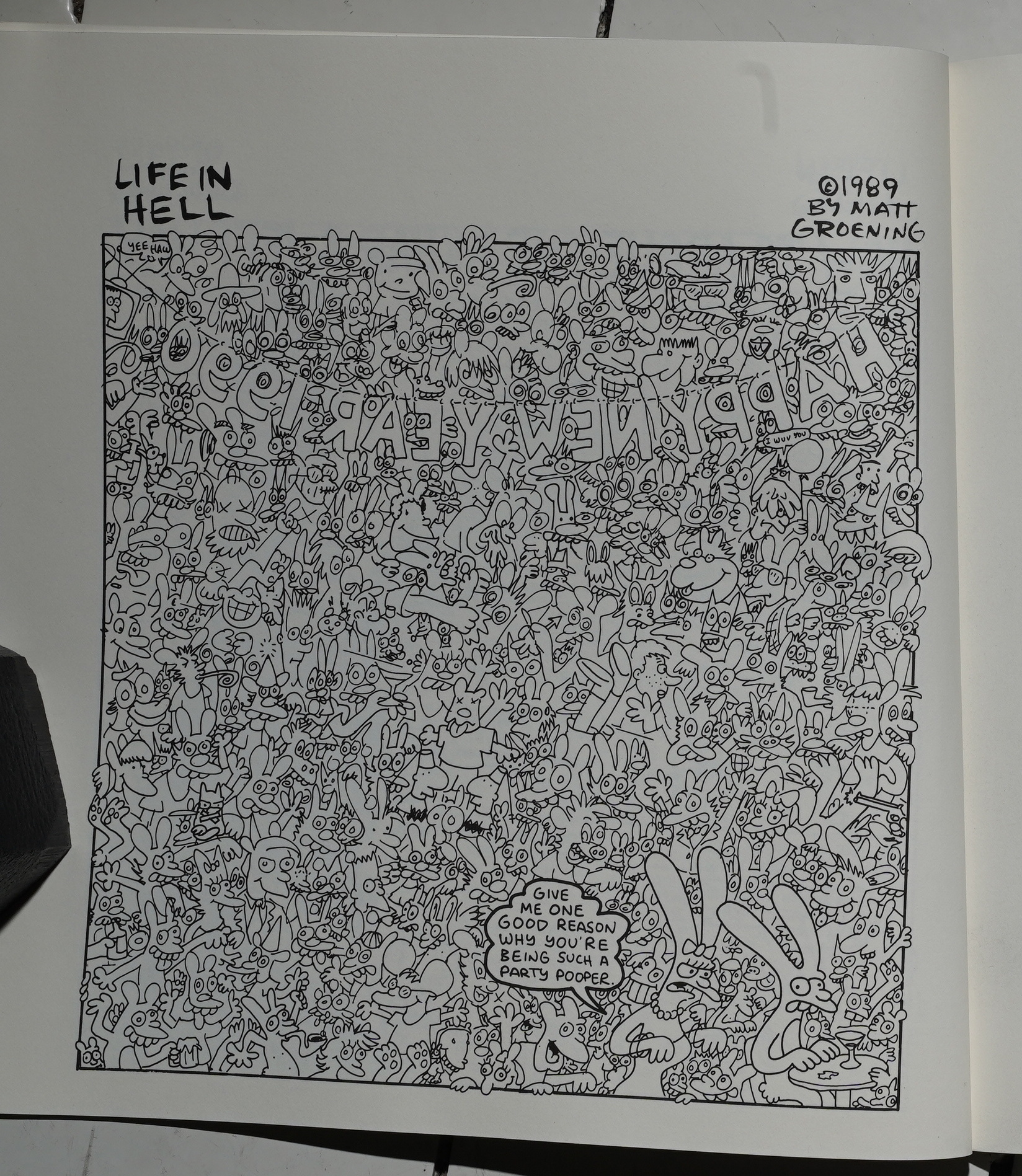 Groening does put in a lot of work on a fair number of strips, but it’s a less intense reading experience than back in the early 80s. 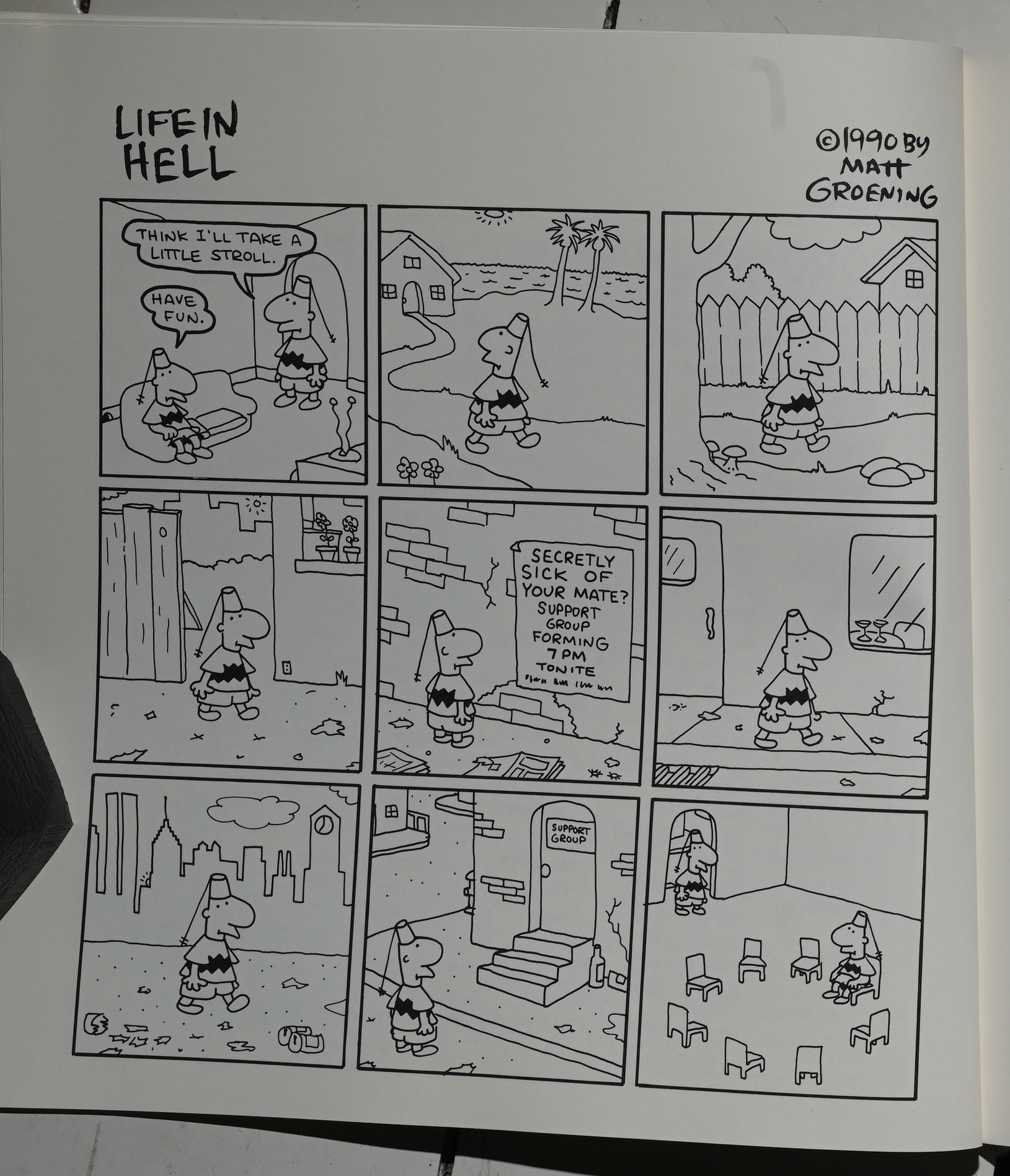 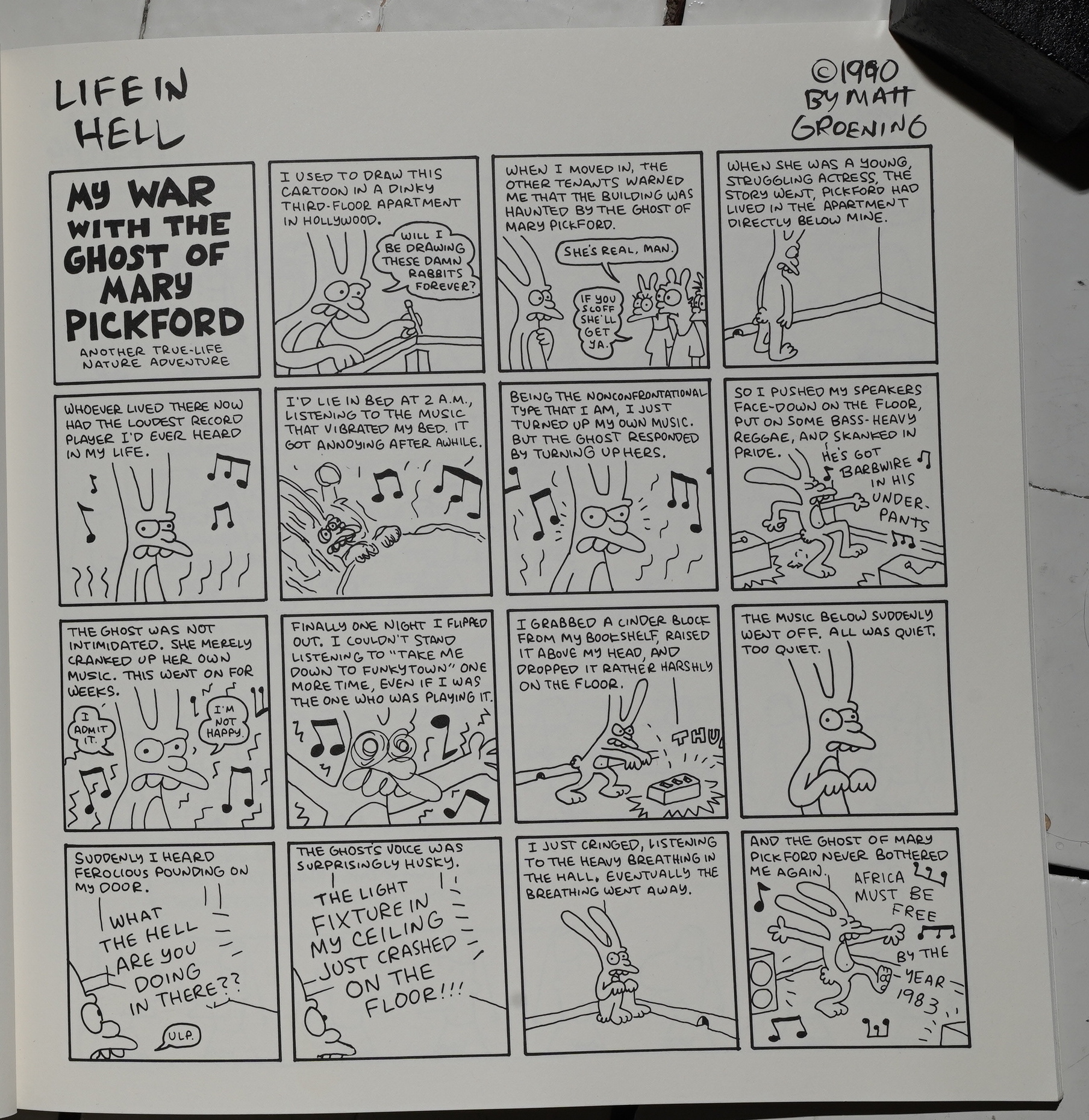 Another new development is that Groening is dropping in a whole bunch of straight-up autobiography (where Binky plays Groening). They’re all … well, anecdotes, but they’re good anecdotes. 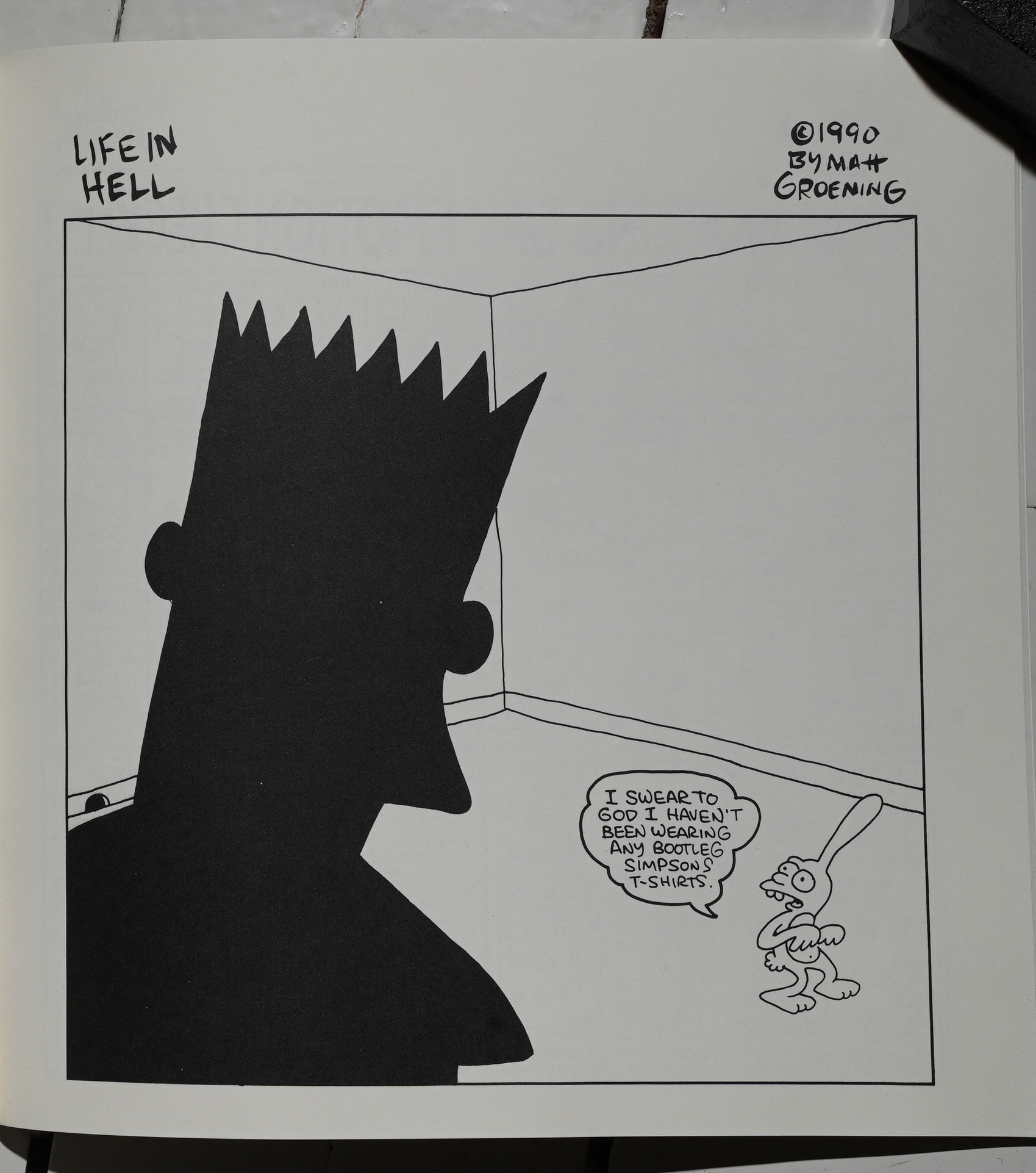 Oh yeah… wasn’t there a big kerfuffle about Fox going after bootleg Simpsons t-shirts in a big way at the time? 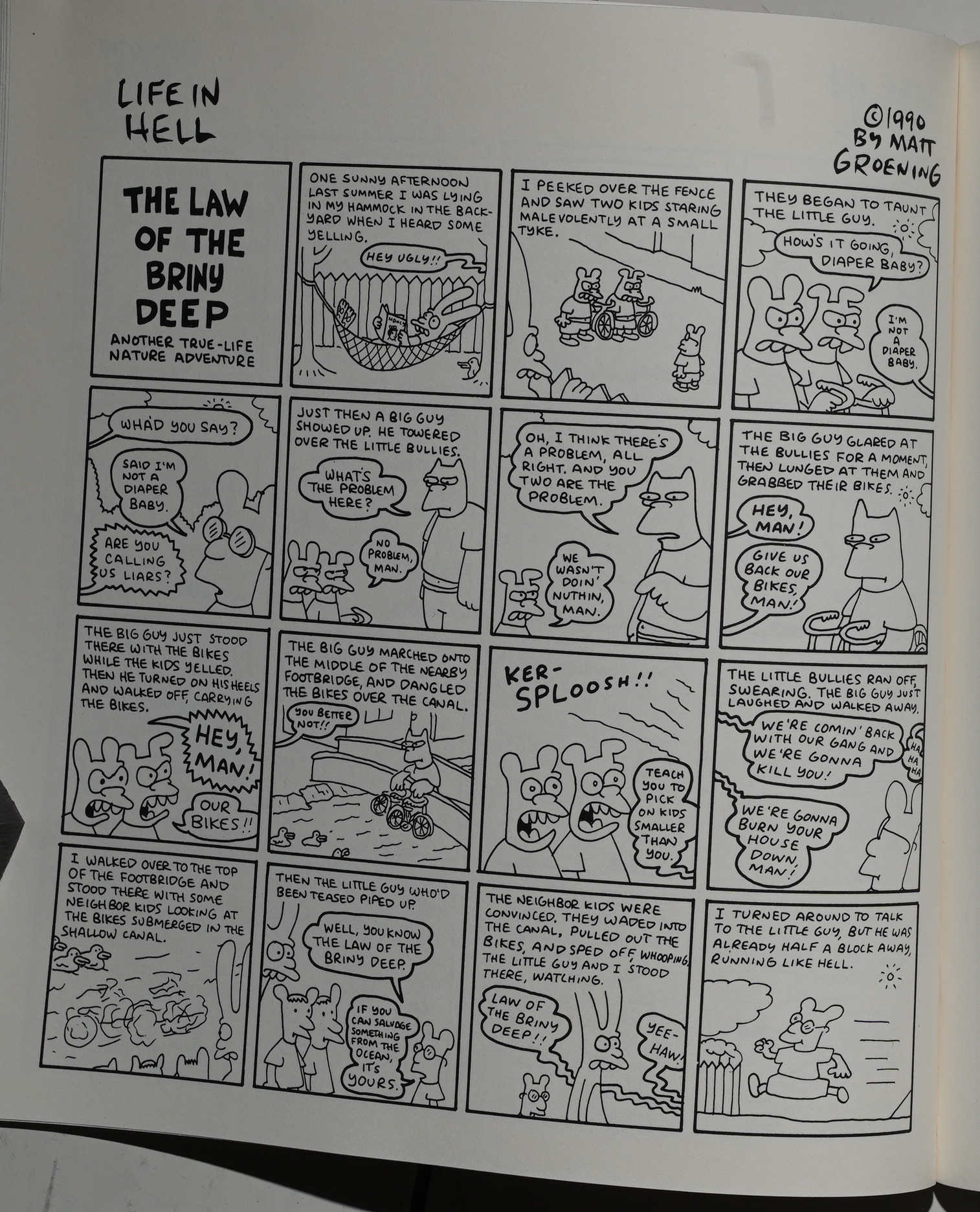 That’s a great anecdote. Now I’m really curious to see whether Groening kept developing the strip in this direction in the following years… 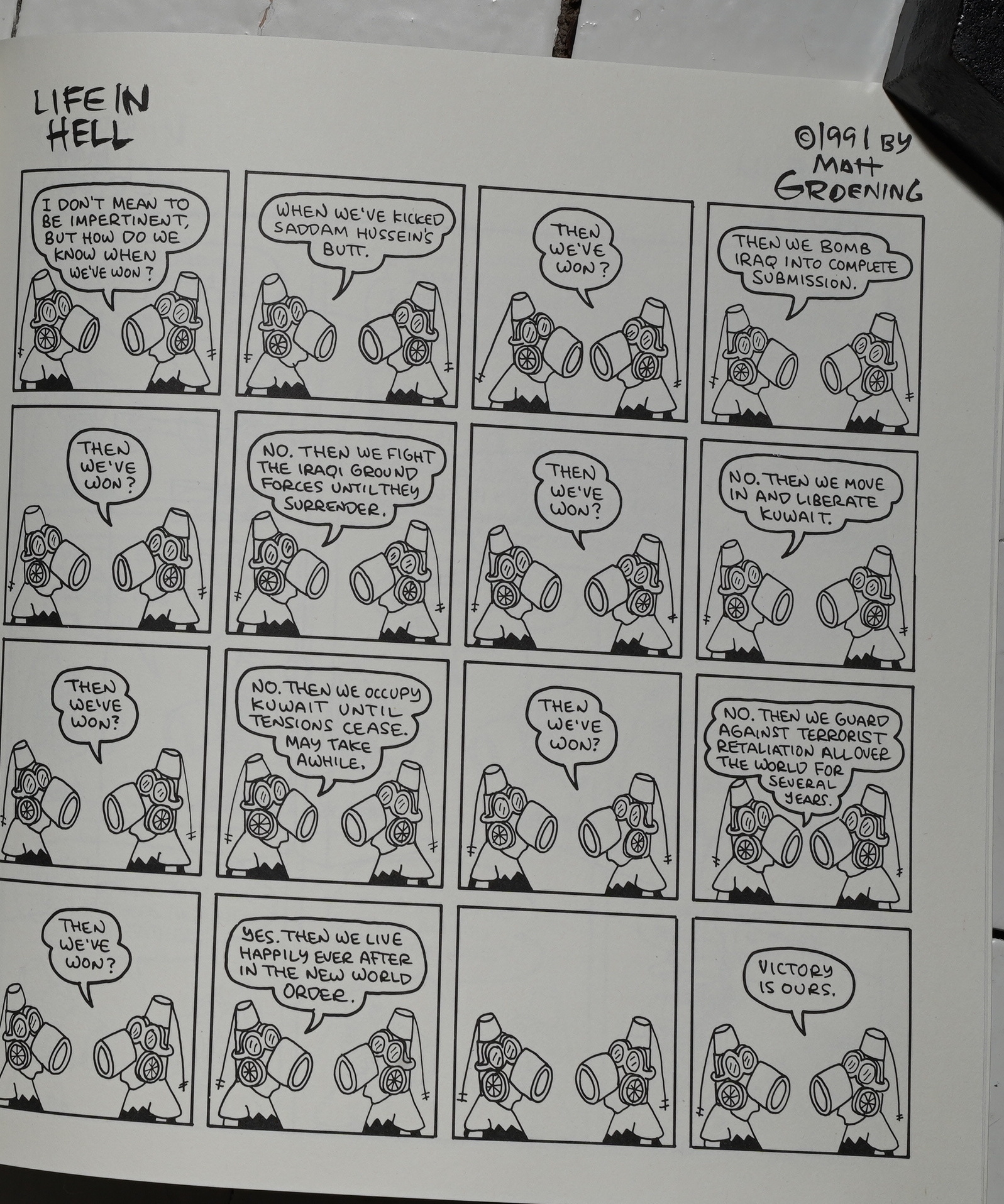 The book ends with a bunch of Akbar & Jeff strips like this, about the first Iraq war.

Groening was too optimistic, unfortunately. 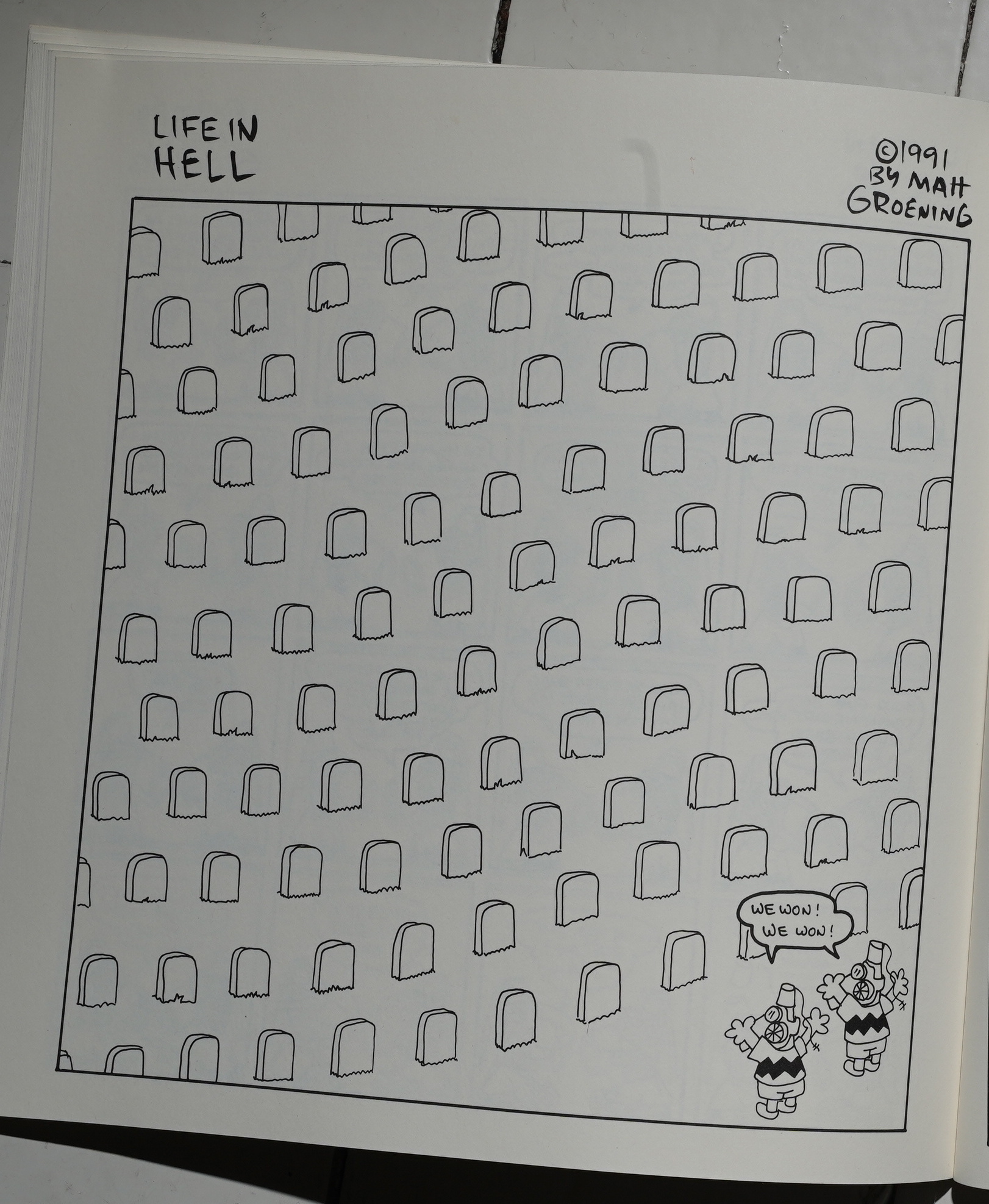 Cartoonists Respond to the Gulf War
As the last issue of the Journal was being com-
pleted, the United States went to war against
Iraq. In the six weeks since then, the war came
to affect nearly every aspect of American life,
including comics.

Matt Groening’s Iåfe in Hell depicted Akbar
and Jeff staring at one another through gas
masks, finally sharing a single flower in the last
panel. “The gas masks seemed like the first
reminder that there are apsects of this war which
can get incredibly ugly and don’t seem to have
been taken into account,” Groening told the Ex-
aminer. A doll of Groening’s most famous crea-
tion, Bart Simpson, was dressed in camouflage
by troops at the Saudi front and presented to
Defense Secretary Dick Cheney. Groening’s
response: “It’s always sad when a 10-year-old
gets drawn into a war.” Groening told the
Associated Press that he was “very opposed to
the war,” but that the Simpsons probably sup-
ported it: “I’m not the Simpsons. I’m smarter
than they are.”

GROTH: One of the things that occurred to me about Life
in Hell is that the politics of the strip usually center on
what I call the private realm, that is, personal relation-
ships, the work place, schools. Unlike something like
Doonesbury, you don’t address national politics.
GROENING: The last few weeks of Life in Hell have been
devoted to the Gulf War, but you’re right. When I got the
opportunity to draw my comic, I wanted to do what was
on my mind, the stuff that keeps me worried: love, work,
sex, death — the basics. I was always amazed that so many
cartoons either dealt with political ideas in a very heavy-
handed way, or concentrated on the trivial inconsequen-
tialities of life, while the hellishness of most people’s jobs
and love lives and fear of death remain unexplored.
GROTH: Would That suggest that you ‘re not a highly poli-
ticized or ideological person ?
GROENING: If I could get my political point of view
across and be funny, I’d do it. But when I’ve tried to do
political humor, it’s just not very funny. I’ve done political
strips from time to time — and there are politics implied
in all of my stuff — but part of my stance is to let people
find the message and decide about it themselves rather
then me declare it. In fact, that’s about as far as I’ll go
in talking about my stuff. It’s not for me to say, but if other
people find it there, I’m glad.
GROTH: So you ‘ve fell compelled to address the Gulf war
in your strip.
GROENING: I was just about to begin a long series of car-
toons called “Binky’s Guide to Love,” a sort of rvised
and expanded look at Is Hell. Then the war started,
and I’ve been doing strips with Akbar and Jeff in gas
masks, talking about the war.
GROTH: This may become evident once I dig Out those
strips, but what’s your take on The war?
GROENING: I think it’s a disaster. I think it’s bad for the
world, it’s bad for the United States, and will not achieve
the stated goals used to justify the war. The comic strip
I just finished begins with the question: “l don’t mean
to be impertinent, but how do we know when we’ve won?”
I’m certainly glad the war seems to be as successful as
it is, but we don’t really know what’s happening because
everything’s censored.
GROTH: Is this the first time you ‘ve actually tackled a ma-
jor Current event in a series of strips?
GROENING: I did some stuff knocking Reagan. In fact,
Efe in Hell started in 1980, the time of Reagan, and I swore
that if Bush hadn’t been elected president that I would have
changed the name of the strip to Life Is Swell. It didn’t
happen that way.