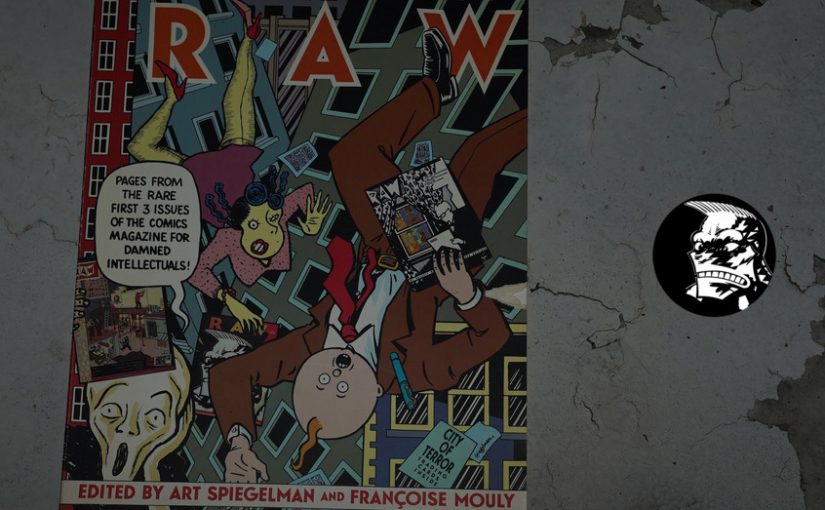 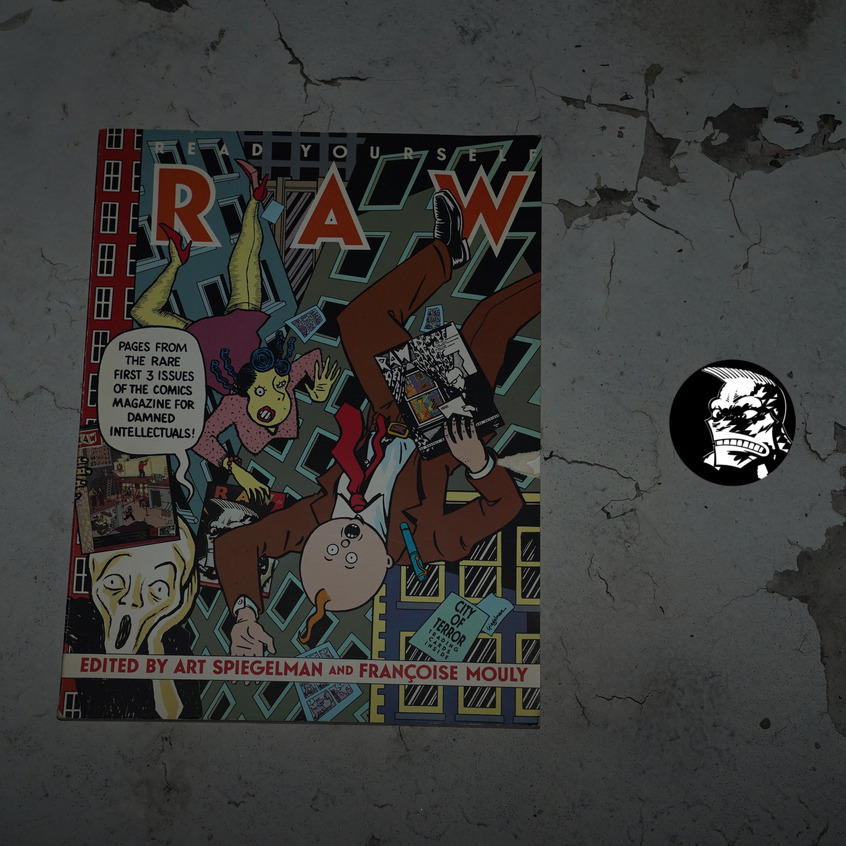 This book reprints Raw #1-3 — but not in full. I’ve already covered those three Raw issues in this blog series, so I’m not going to re-read this book once again… instead, I’ll just see if there’s anything interesting about what they’ve kept and what they’ve left out? OK? Ok.

This collection is printed by Pantheon, which is natural (since they’d just had a monumental success with the first Maus book)… But Raw vol 2 would go on to be published by Penguin instead. ¯\_(ツ)_/¯ 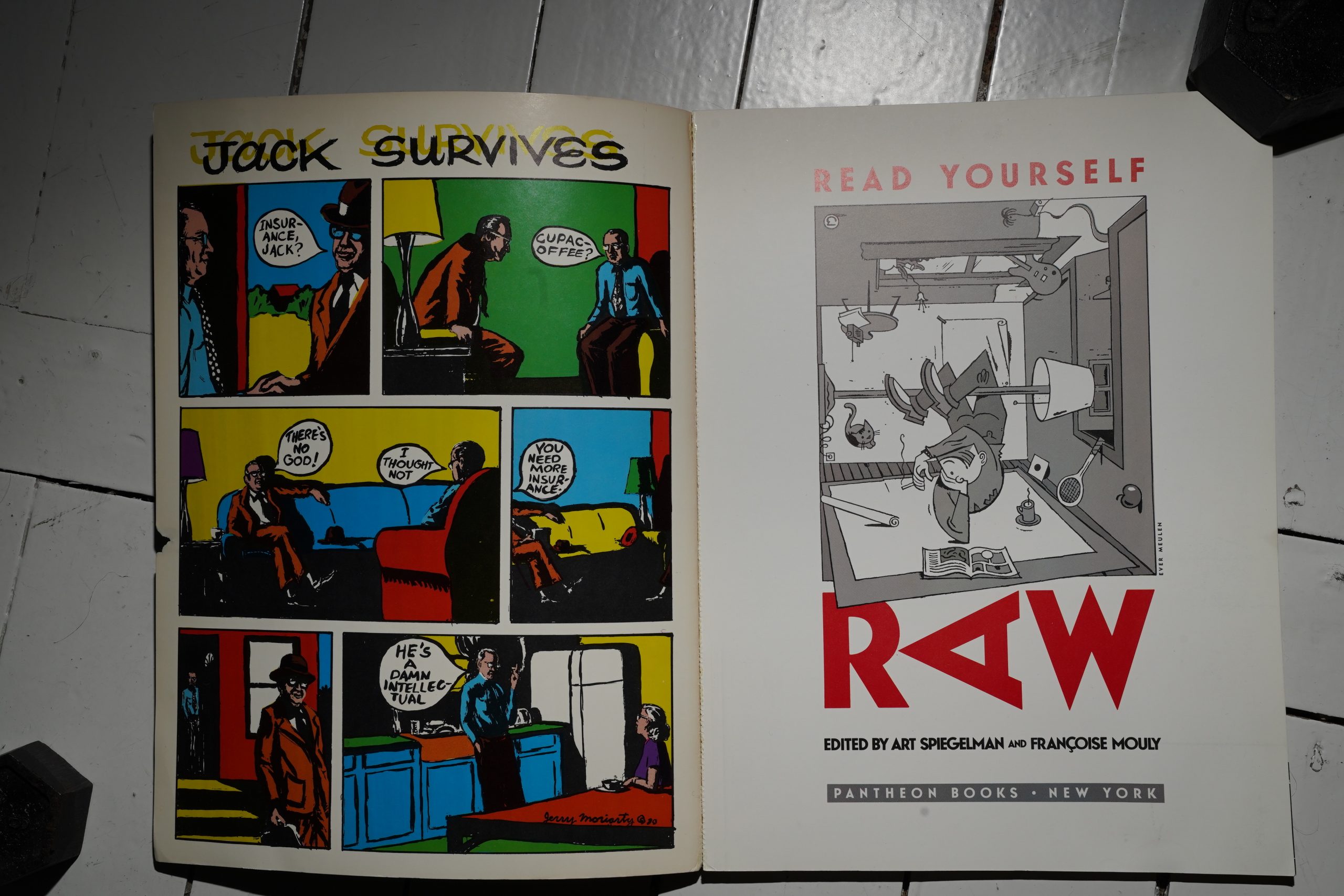 I guess this book was designed by Mouly? It doesn’t totally look like it… 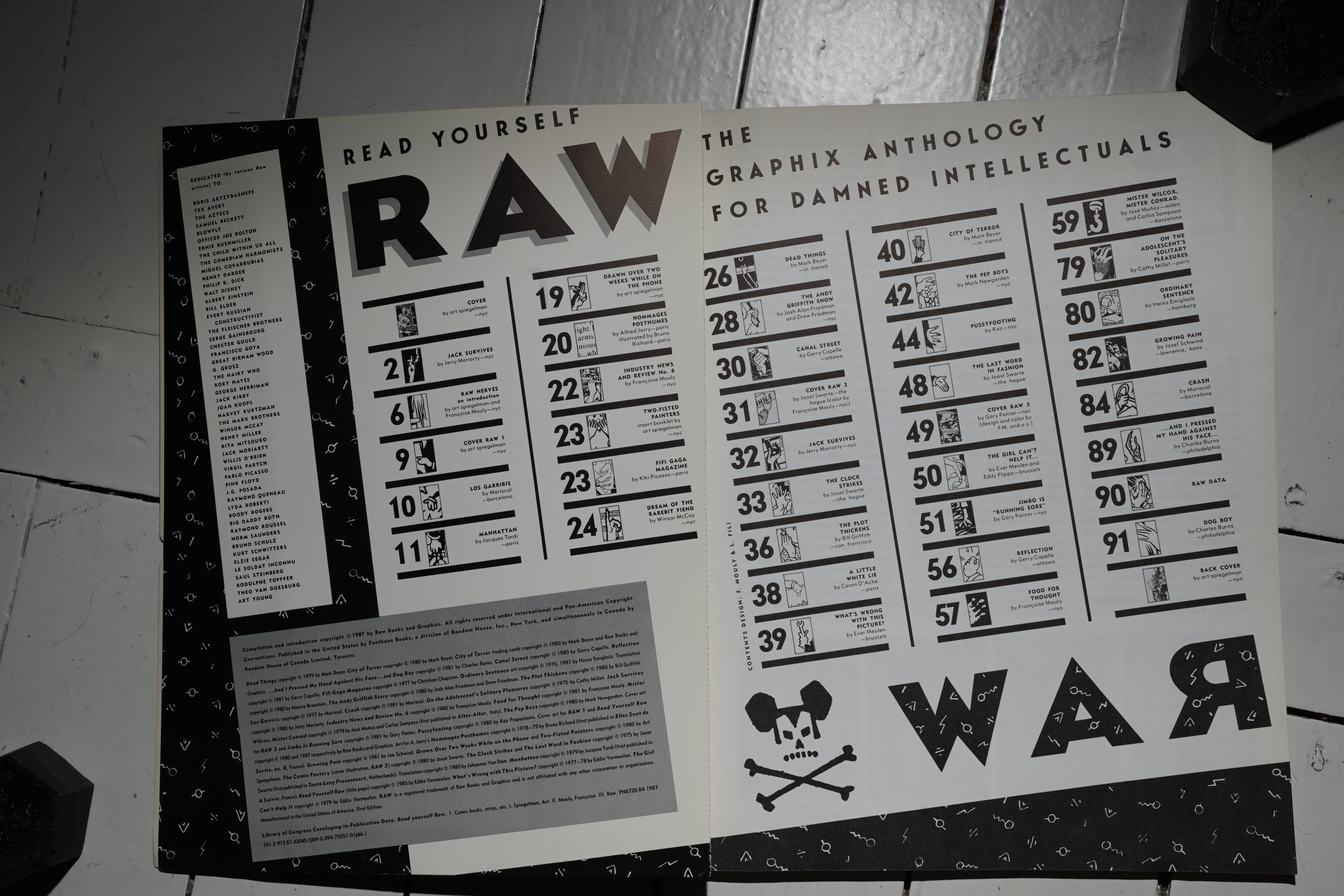 But this looks more like it. It says that the “contents” are designed by Mouly and L. Fili… perhaps that’s everything but the covers? 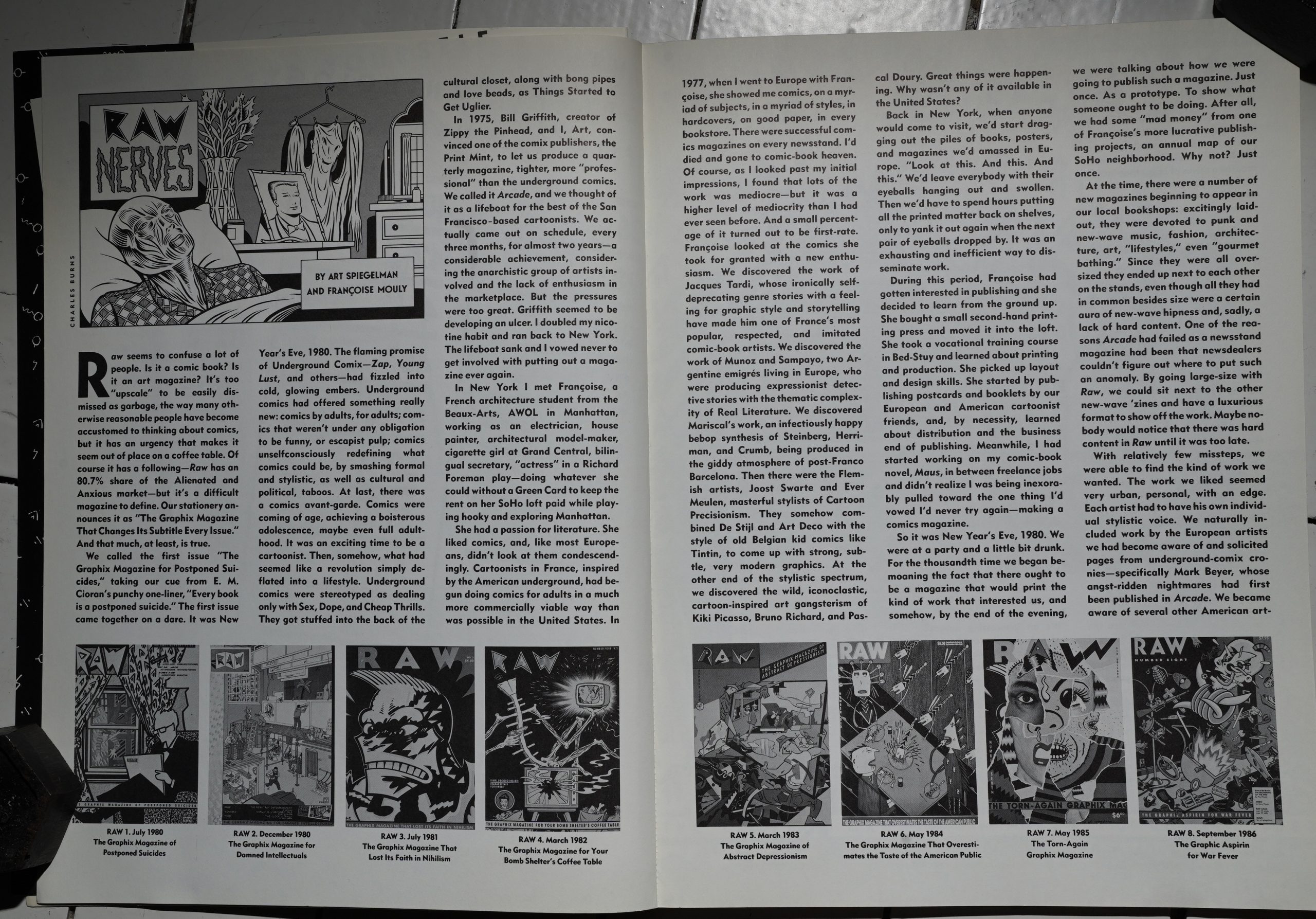 *gasp* It’s not set in Futura! MOULY! WHAT WERE YOU THINKING!!!

Spiegelman does a very chatty (and amusing introduction). Raw itself mostly eschewed this sort of stuff — the introductions were often more … conceptual, but I guess it’s time to shift to Elder Statesman and look back upon Raw as a youthful folly.

He does go into details about some issues, like the Mark Beyer trading card situation… 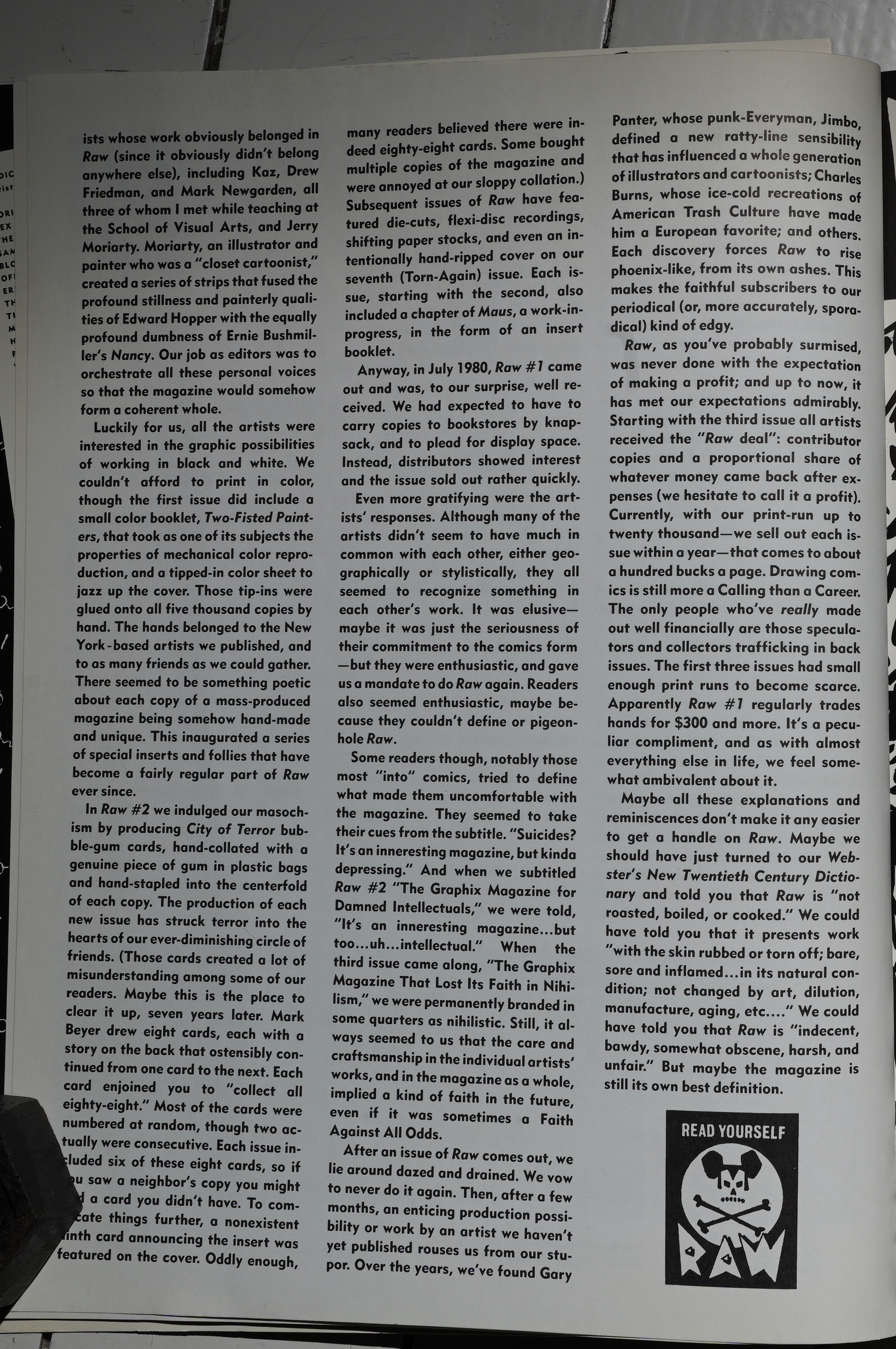 And he explains about the “Raw Deal”: Copies of Raw, and then profit sharing, which comes out to about $100 a page. And explains the ineffable thing about Raw: “Although many of the artists didn’t seem to have much in common with each other, either geographically or stylistically, they all seemed to recognize something in each other’s work. It was elusive — maybe it was just the seriousness of their commitment to the form — but they were enthusiastic, and gave us a mandate to do Raw again.” 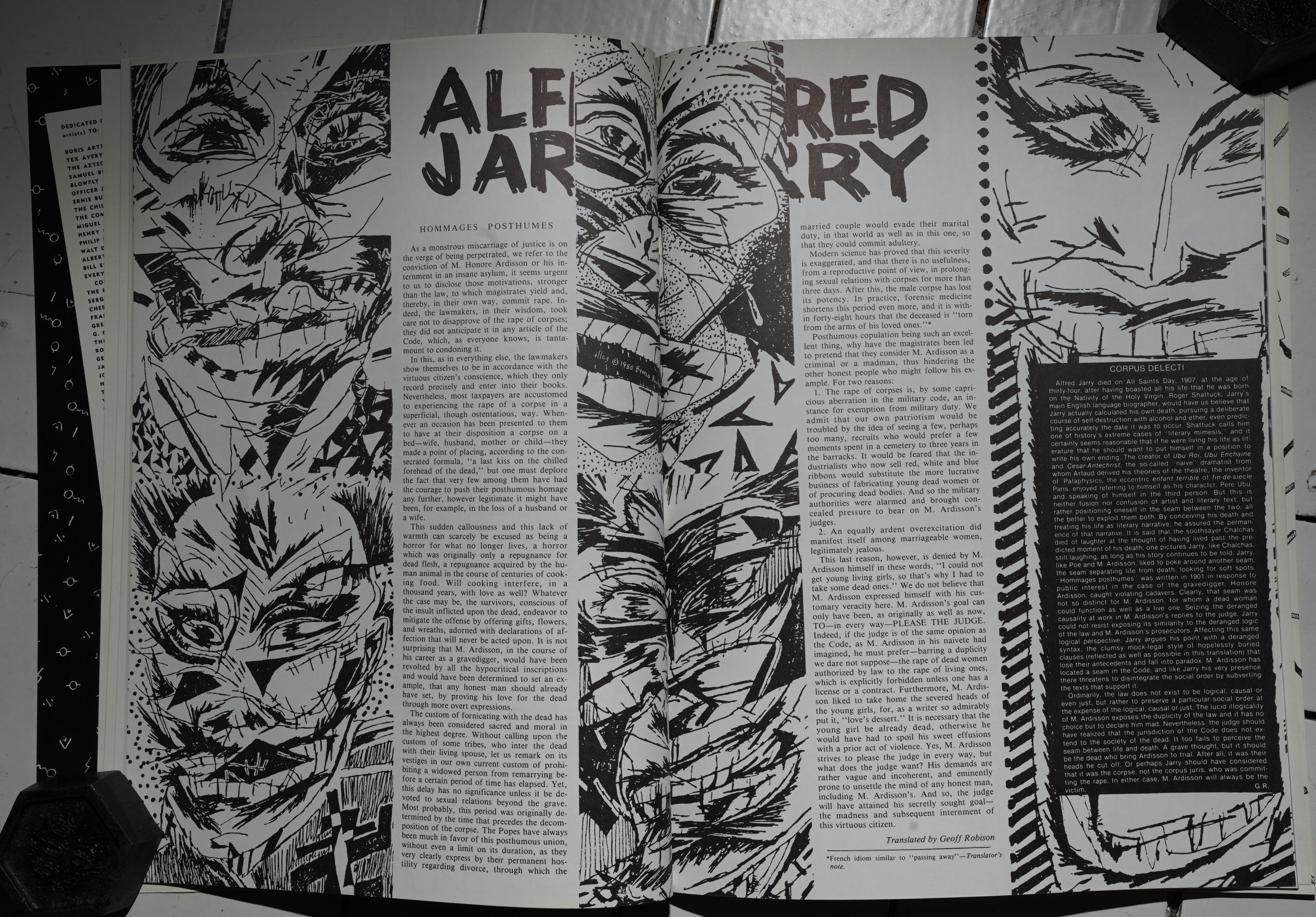 The section reprinting Raw #1 is 22 pages long, and Raw #1 was 36 pages (including covers). I had imagined that they’d dump the text pages, but they included this Alfred Jarry-related text… 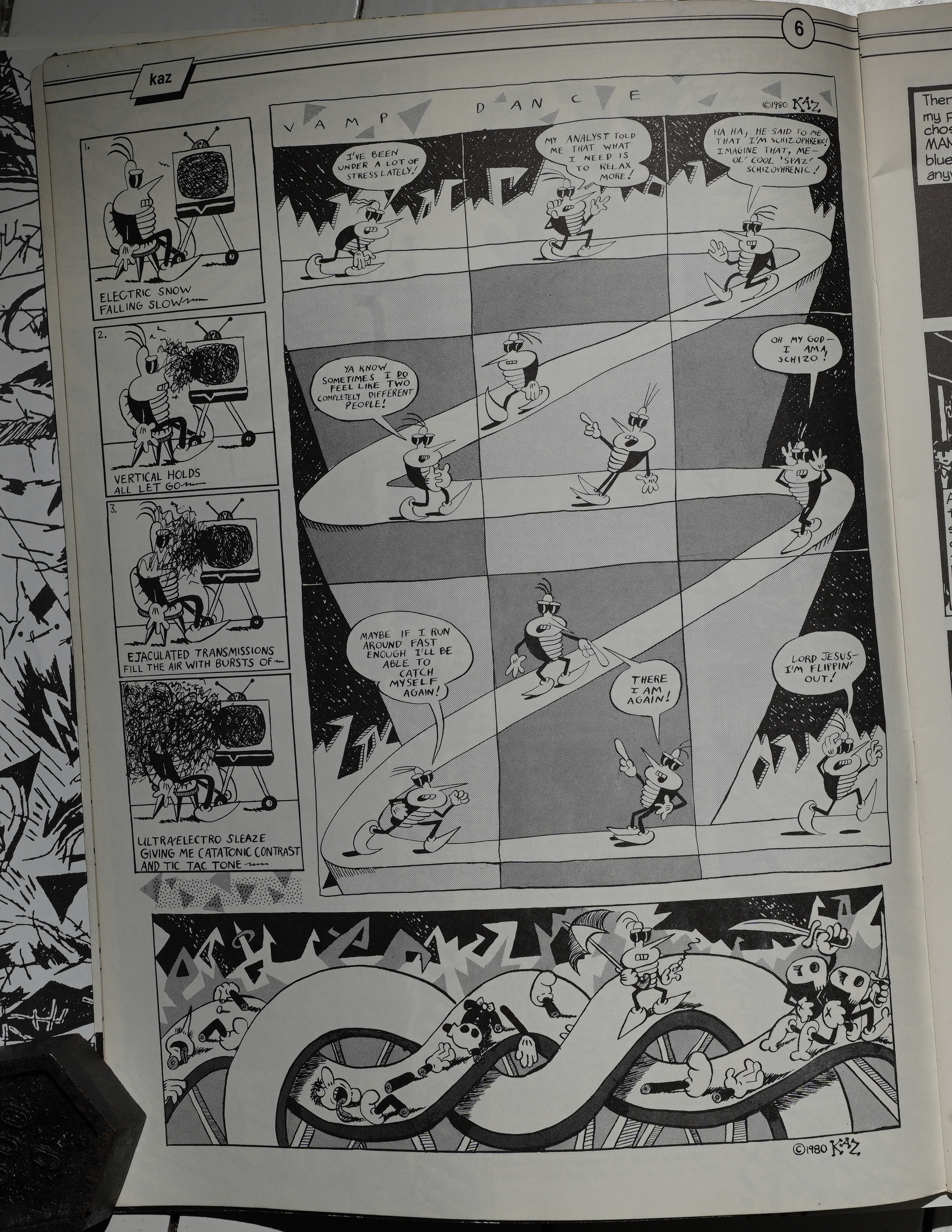 … but dumped this Kaz page… 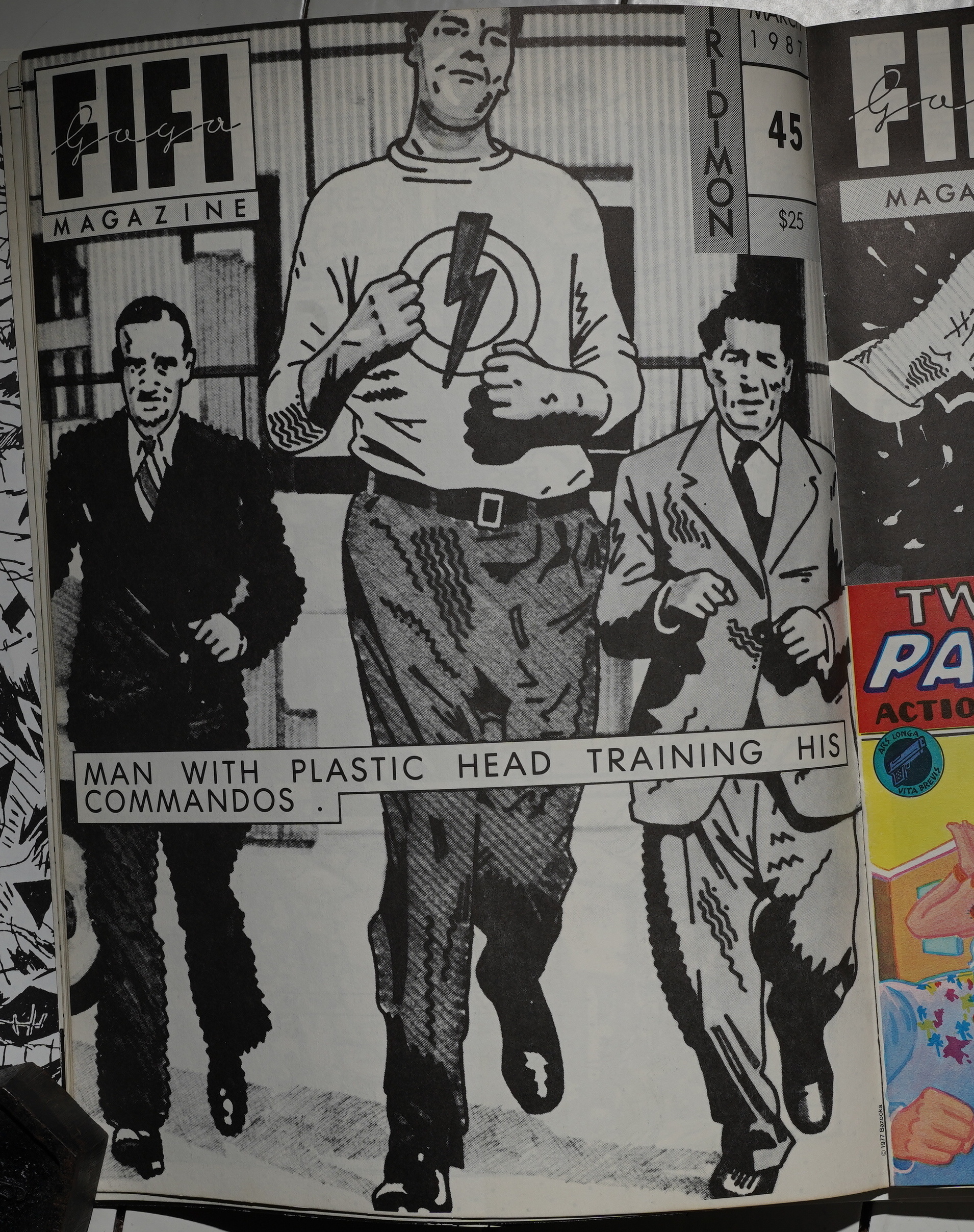 … and this Fifi page that surrounded the Two-Fisted Painters booklet (but the booklet itself is included). 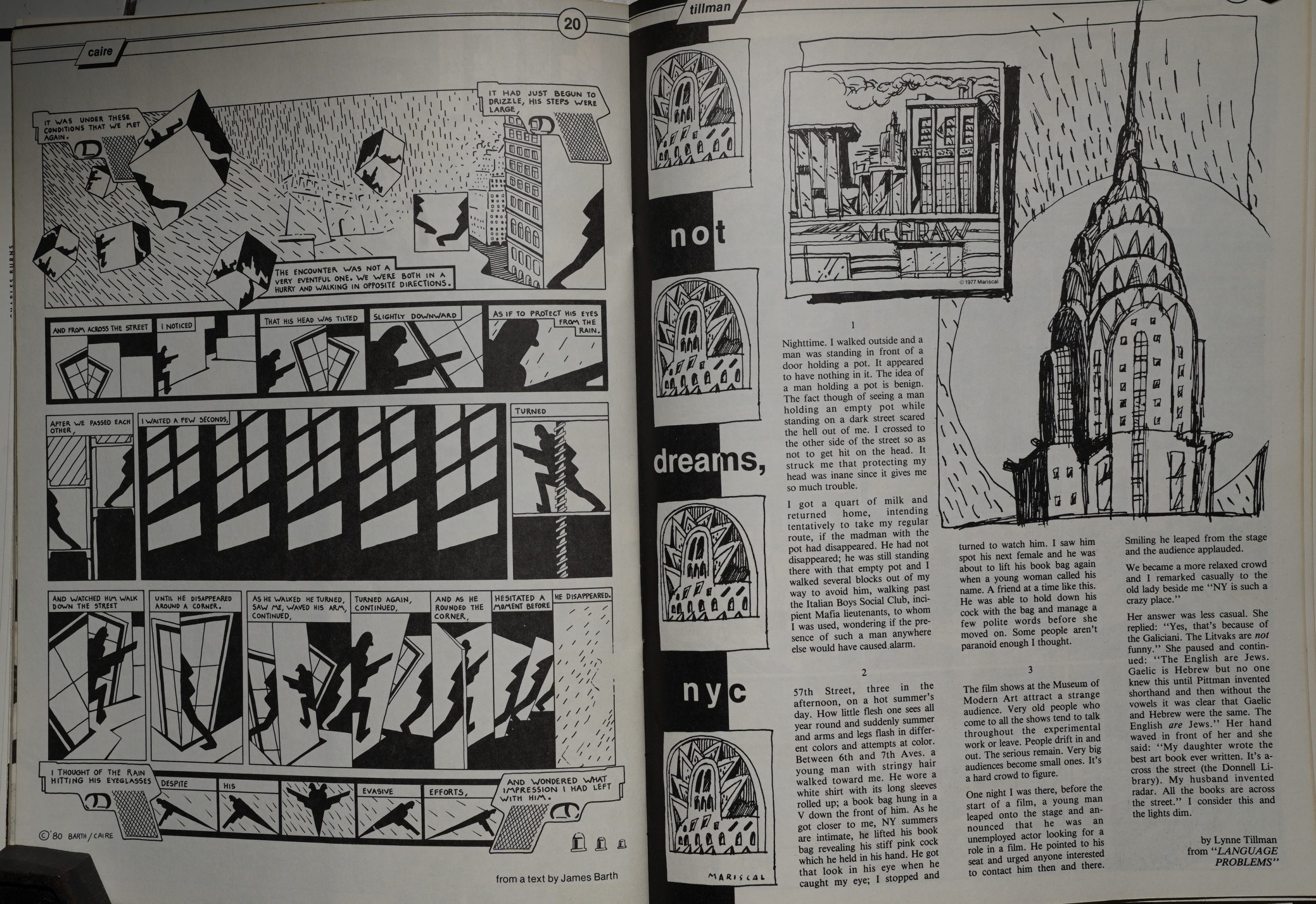 Also gone are Patricia Caire and Lynne Tillman. Did any women (except Mouly) make it into this book? (These two may well have been dropped for rights issues, of course — the Caire is based on a Barth text, and Pantheon may have wanted to be more careful…) 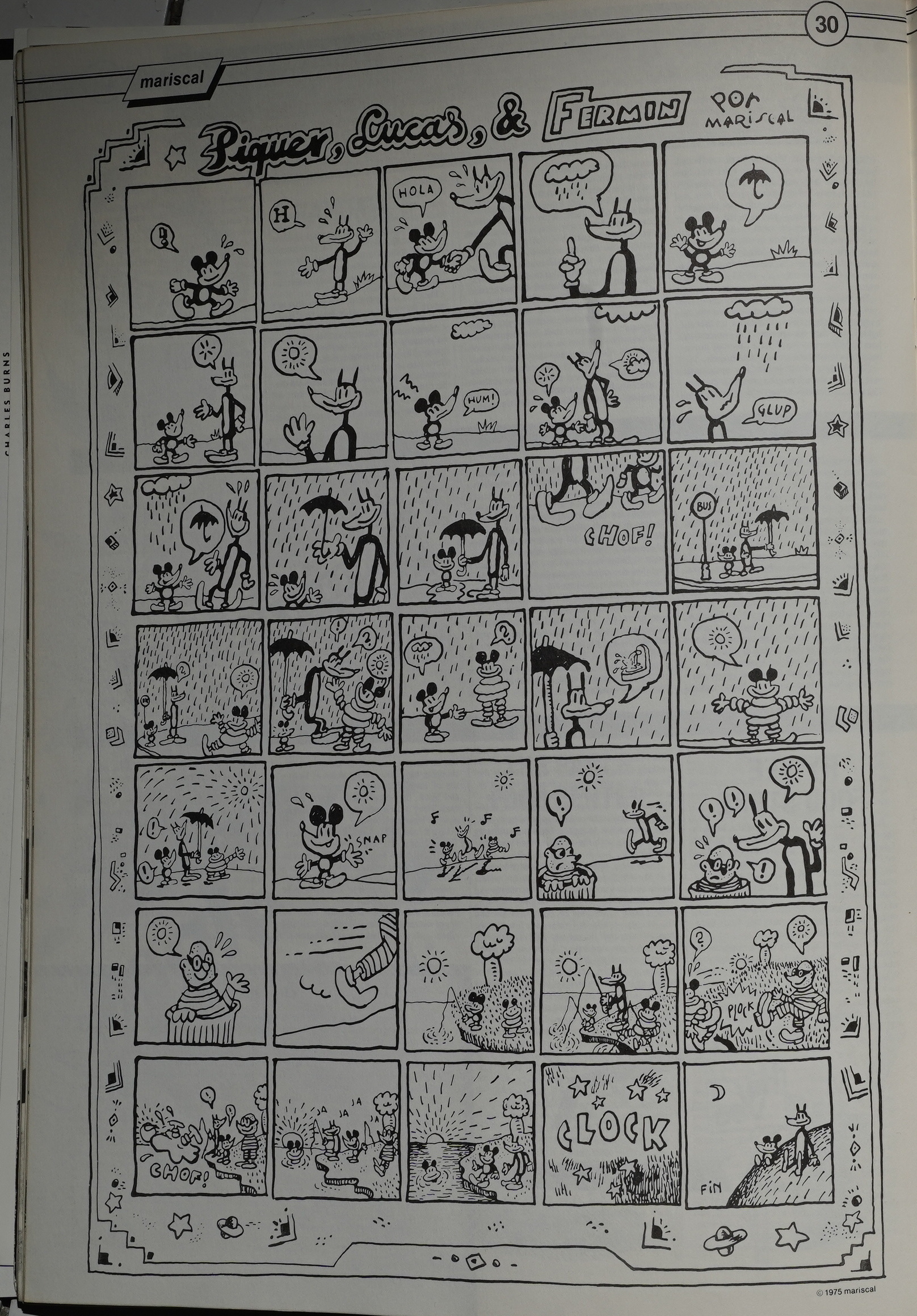 Gone is also this Mariscal, but another Mariscal piece from the same issue survived.

So… did Pantheon just have a target page length in mind, or did the editors just dislike the stuff they left out? Raw #1 is a very strong unit; it’s a great reading experience. With almost half cut, it’s less compelling. (Although the pieces that did make it are great, of course.) 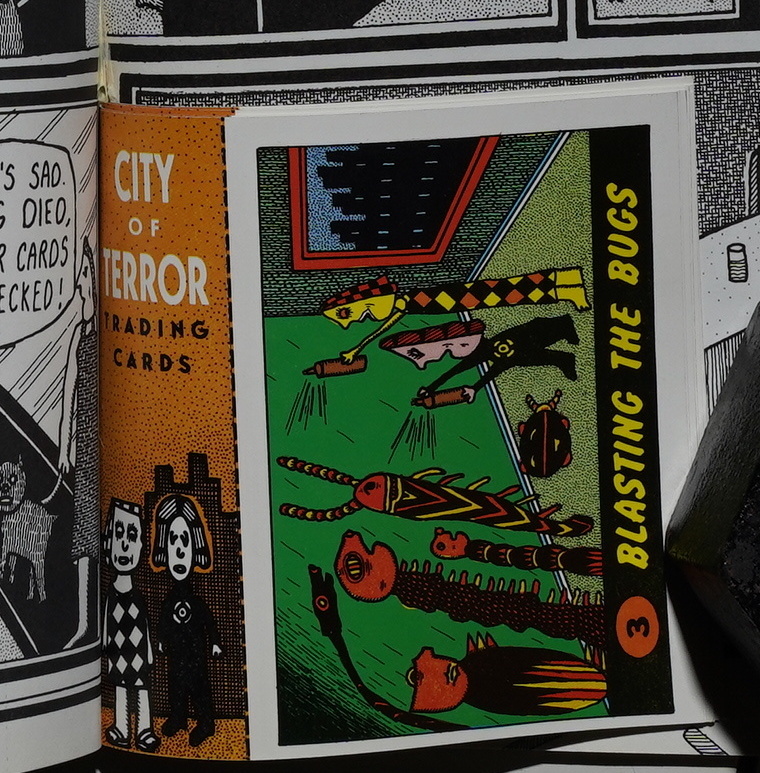 One thing that did make it was Mark Beyer’s City of Terror trading cards! Which is great, because I’ve never seen a copy of #2 that still had them. 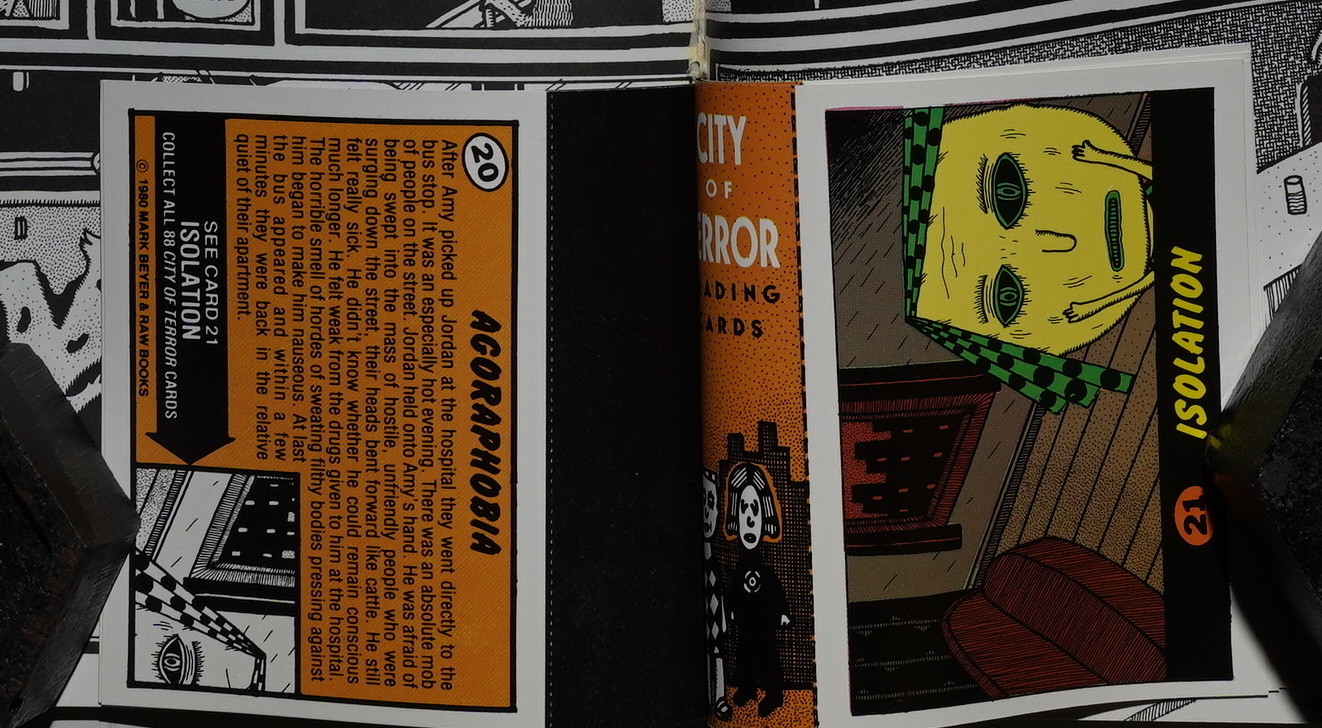 They’re very difficult to enjoy here, though, because of the way they’re glued into the book… still fun. 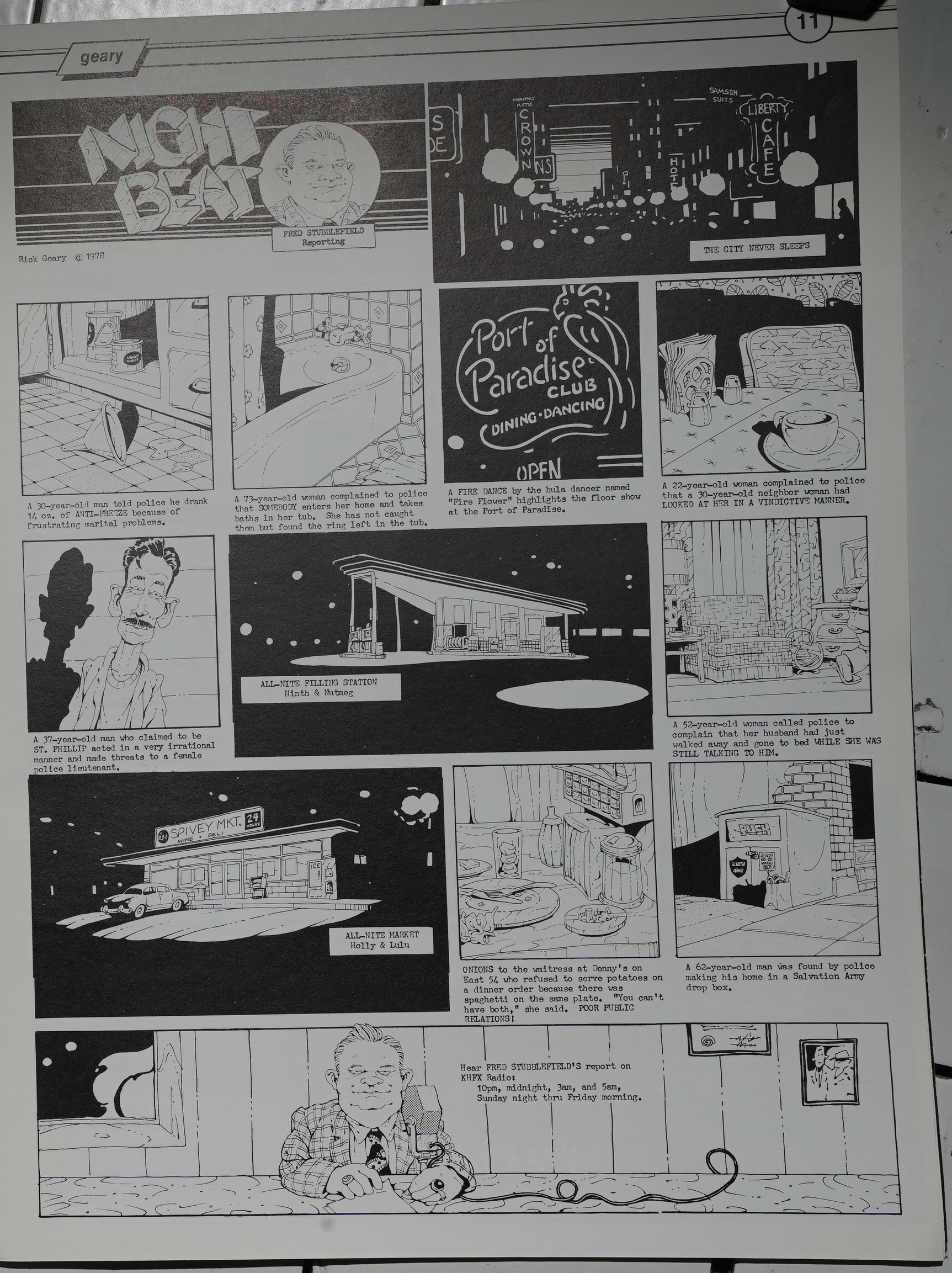 So what was cut? Well, I’m not going to list all the cut pieces, but Rick Geary is gone… 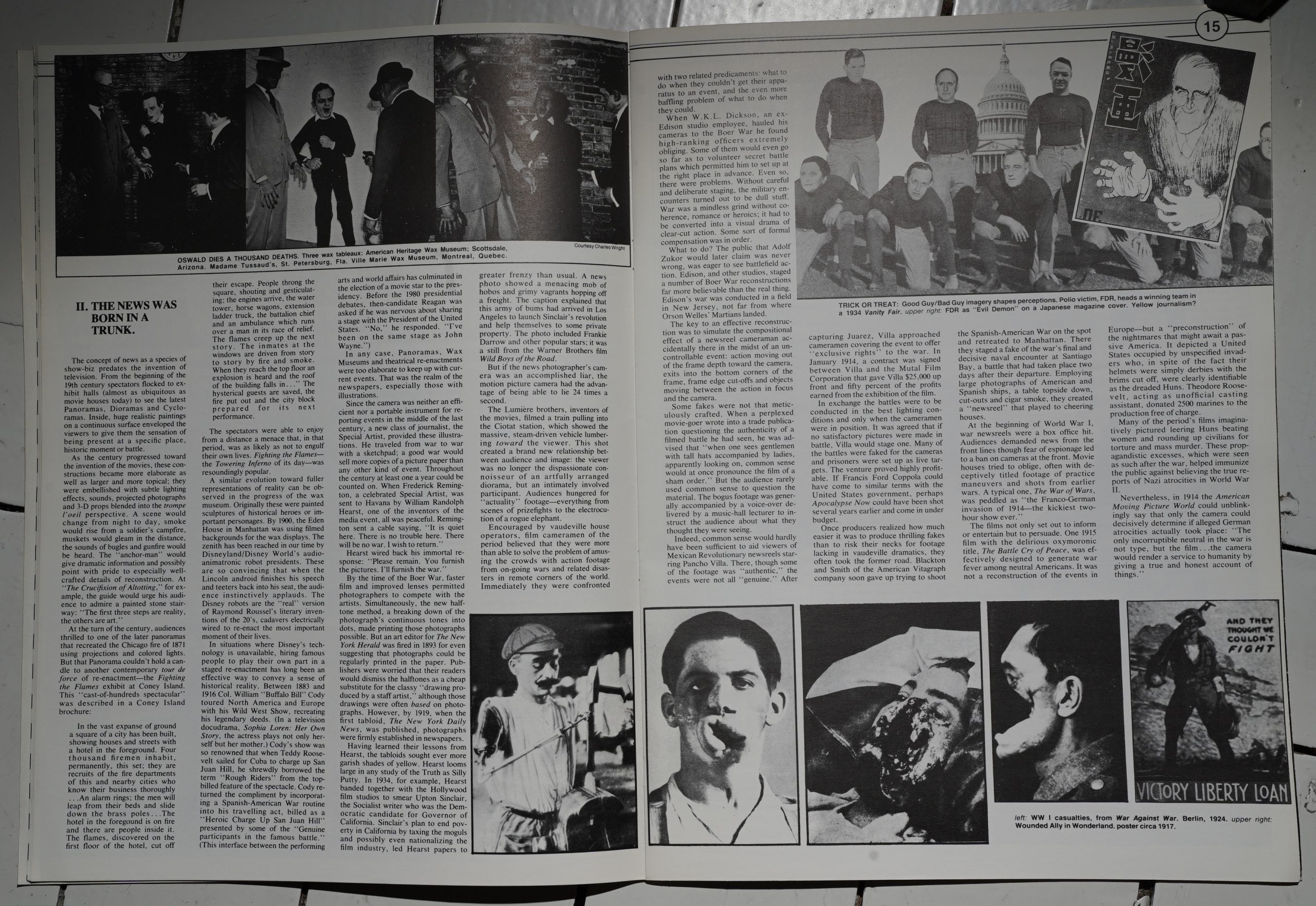 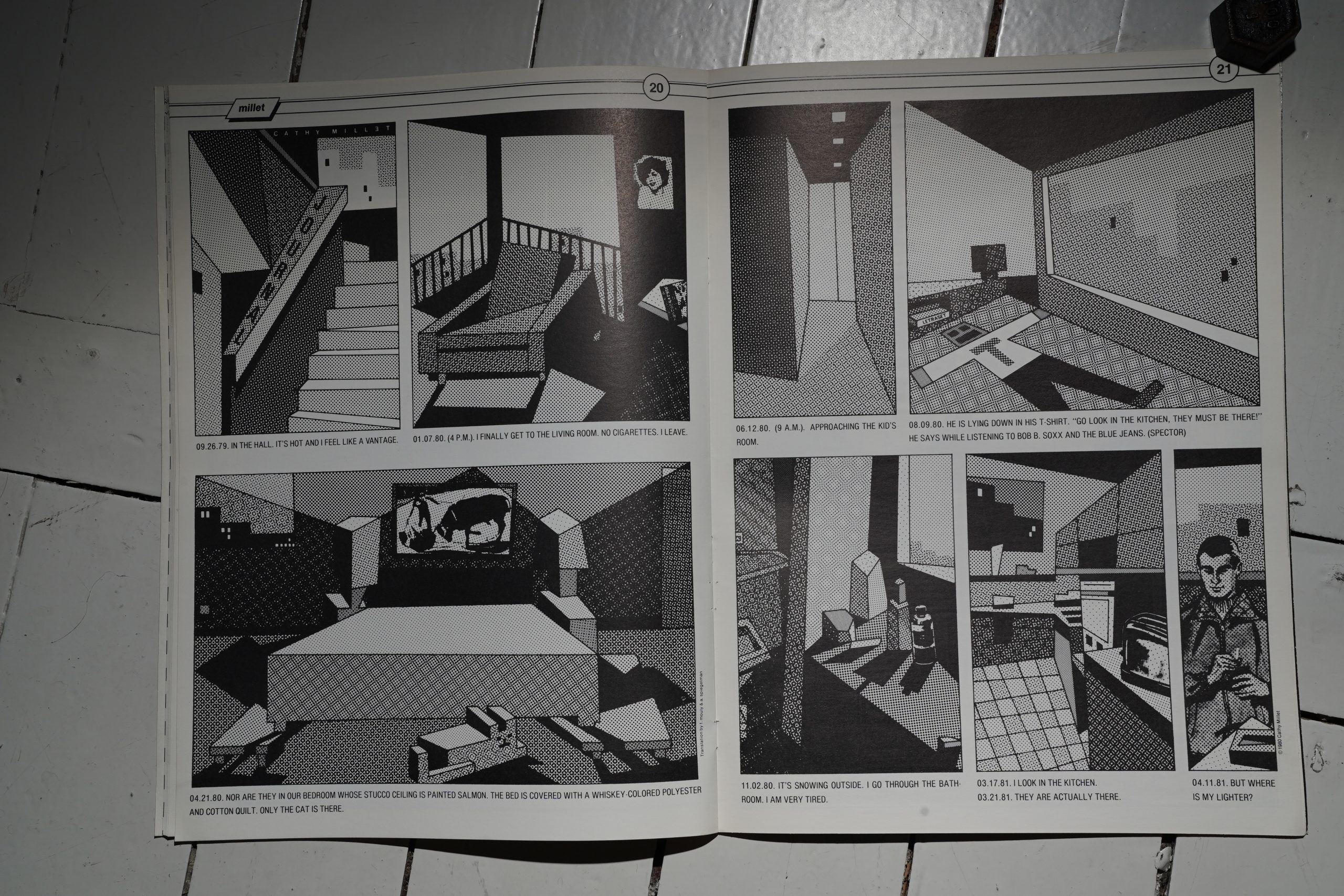 And fortunately Drew Friedman’s racist goof is gone. Which made fun of Spiegelman, so … perhaps that was a contributing factor? Or just because it wasn’t very good? 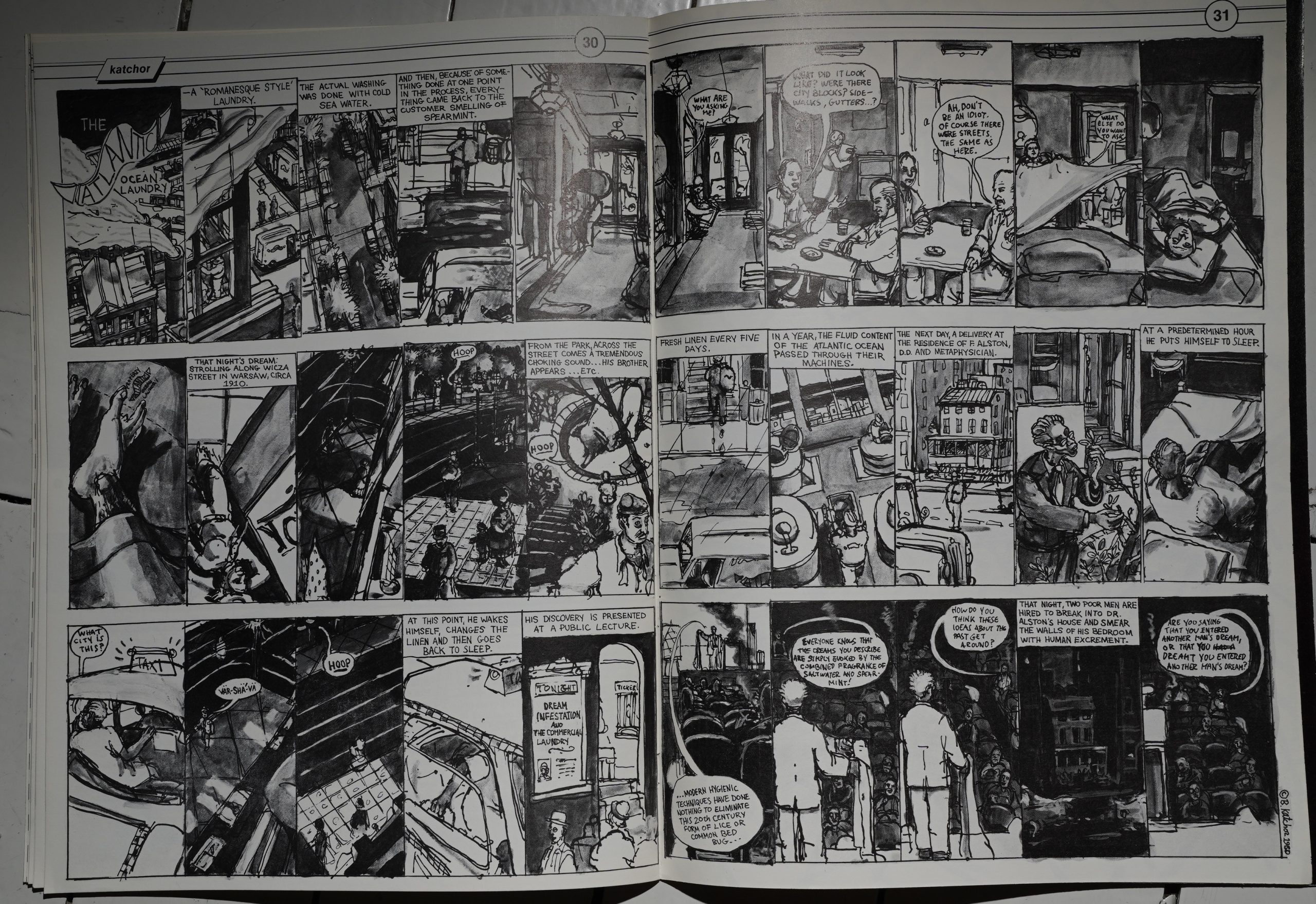 *gasp* The Ben Katchor thing is gone! The outrage! 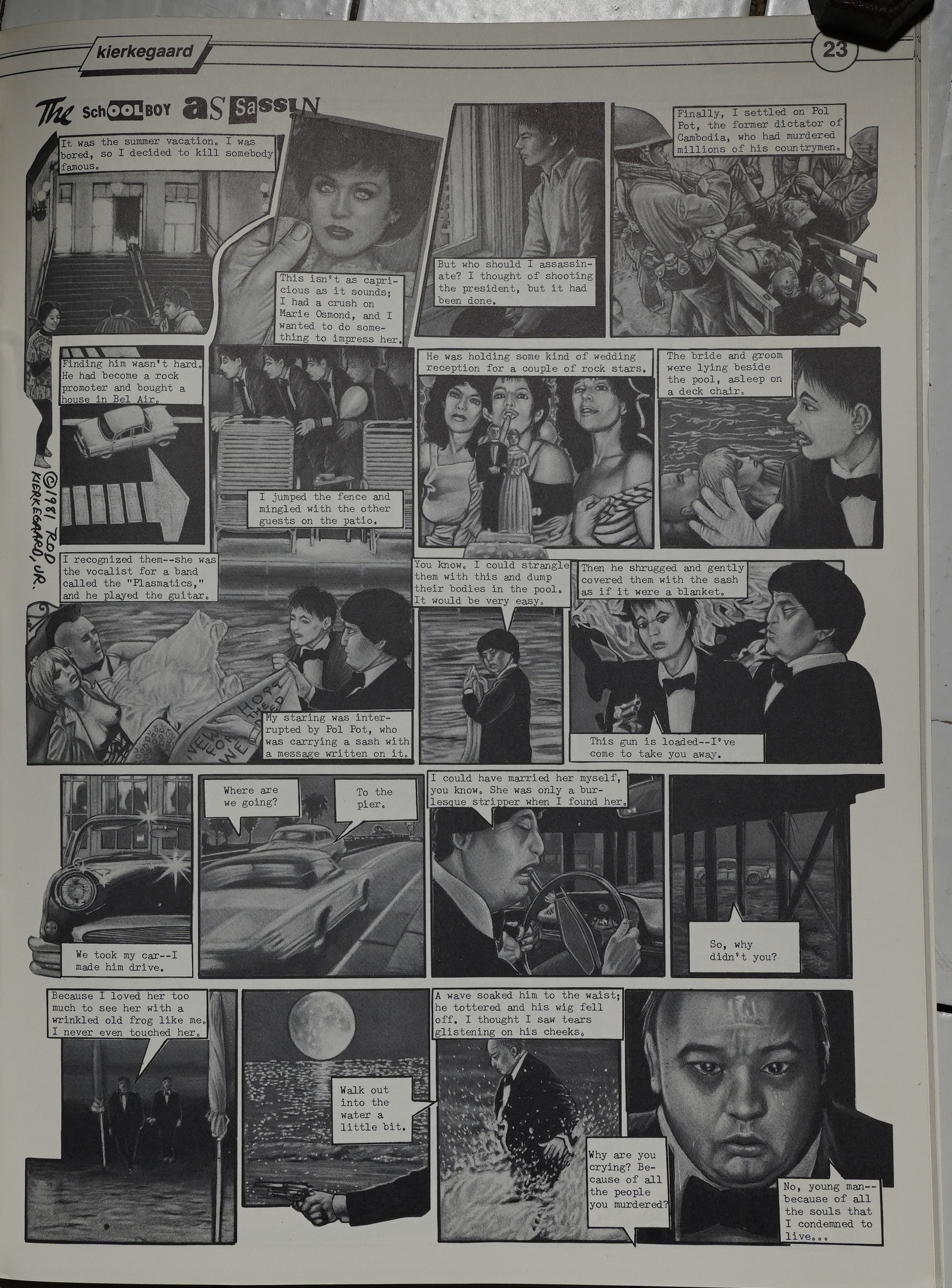 Almost everything is included from the third issue — 42 of 48 pages (including covers). Gone is Kierkegaard… 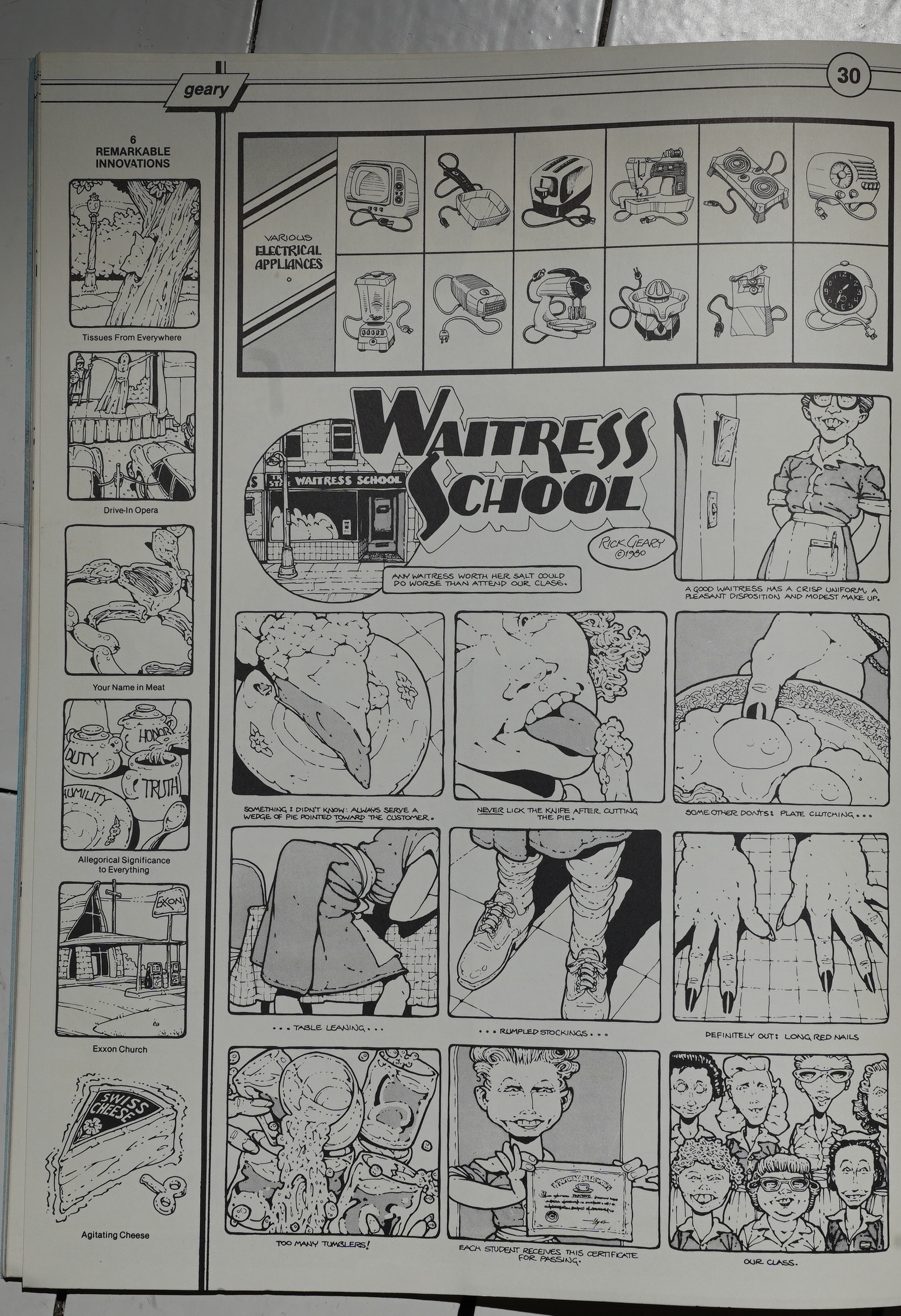 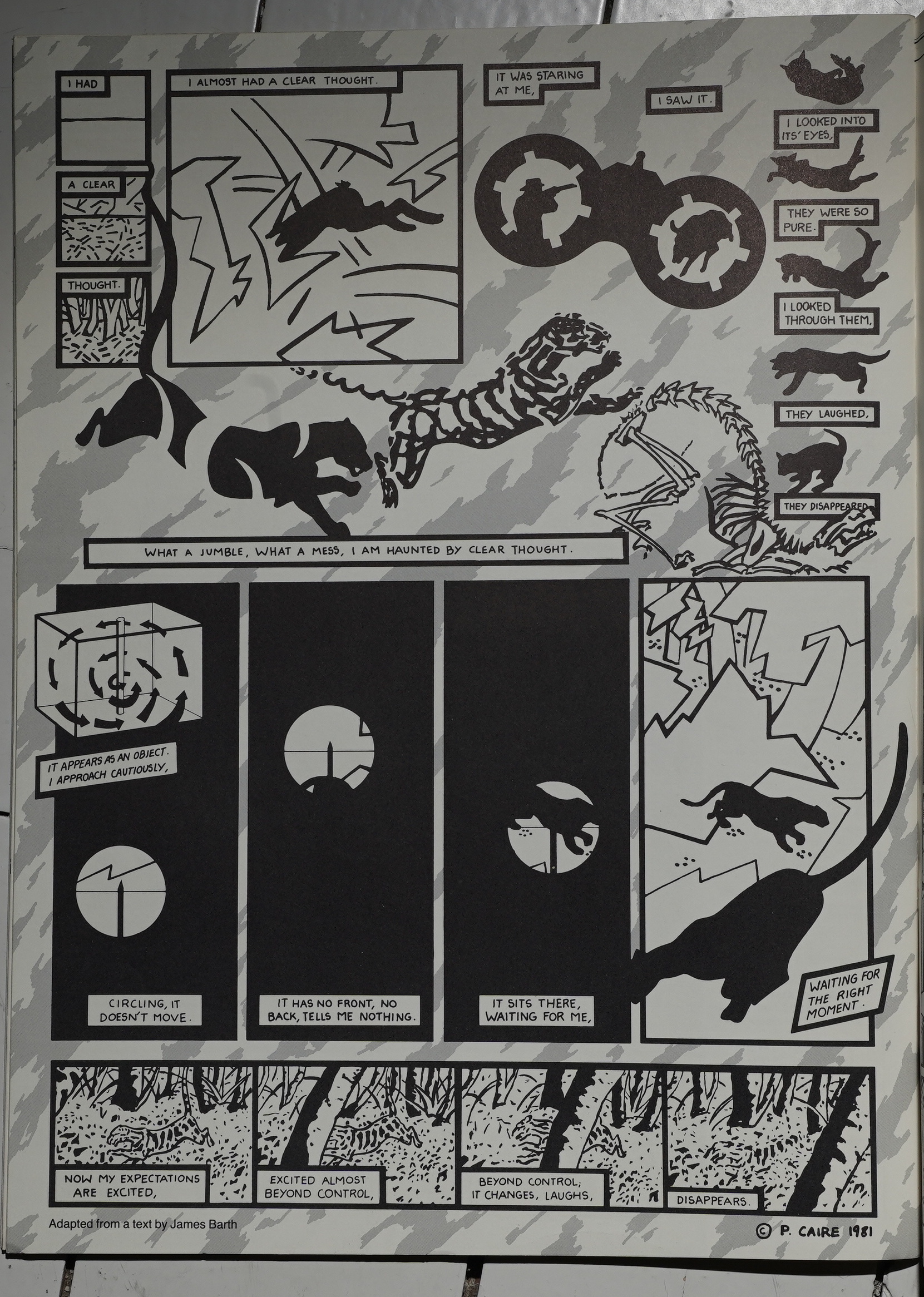 And the apparent Jihad against women continues — Patricia Caire did one of the few pieces to be removed from #3.

Now I have to look at the credits to Read Yourself Raw again — did any women make the cut?

A Kiki Picasso page made it… a Cathy Millet page… a couple of Mouly pages… and that’s it.

Pantheon Books’s recent publication
of Read Yourself RAW—a splendid
compendium of material from the first
three issues of RAW, the avant-garde
graphic showcase edited by art spieg-
elman and Francoise Mouly—is a
happy occasion on several counts. Its
appearance is yet another indication
of the enhanced marketability of so-
phisticated comics in America. (Pan-
theon, a division of Random House,
published spiegelman•s Maus, whose
success surpassed expectations, and is
planning several future ventures into
comics.) Read Yourself RAW’ also
make possible a further dissemination
of some superb comics that would
otherwise remain unavailable to many
readers. Finally, on some level it
vindicates the faith and persistence
Spiegelman and Mouly demonstrated
in publishing RAW against what must
have seemed insurmountable ob-
stacles.
The first issue of RAW made its ap-
pearance during an especially dreary
period in recent comics history. (To
be exact, the date was July 1980.) As
published and edited by spiegelman
and Mouly. RAW’s boldness and vital-
ity—its blissful and complete disre-
gard for the constricted American no-
lion of what “comics” are supposed
to be—set off some immediate shock
waves. As I noted in a review of the
first two issues of RAW in Journal
#64, spiegelman and Mouly’s intent
was “to shake things up, to move
beyond accepted conventions into new
areas of expressiveness and idiosyn-
crasy… RAW is a Jarryesque toying
with the arrangement of the car-
toonist•s mode of imagining.” More
than anything else. RAWS appearance
offered a corrective. In the face of so
much that is contemptible in our
popular culture. RAW was and remains
a forthright declaration that comics are
a sophisticated, adult medium. cap-
able of producing joy and pathos and
worthy of thought and contemplation.
The comics themselves attested to the
enormous, untapped potential of the
medium.
That RAW came into being at all is
a tribute to the tenacity of spiegelman
and Mouly. They set out to create a
“prototype” (their term) that would
serve “to show what someone ought
to be doing.” Given the track record
of the undergrounds in the preceding
decade, spiegelman and Mouiy had
little reason to anticipate that RAW
sales would be good In fact, they
were surprised when demand con-
tinued to exceed supply over the
course of increasing print runs for the
first four issues—the last published in
1986—RAWs audience and influence,
to everyone’s surprise, continued to
My sense is that RAW: which dev-
eloped out of spiegelman and Mou-
ly’s simple desire to see a magazine
that “would print the kind of uork that
interested us,” fulfilled long-disap-
pointed hopes among many for a
renaissance of understanding that
comics were something more than the
juvenile stuff dominating the mass
market in 1980 Having suffered the
pangs of a slow, prolonged death, the
undergrounds lost most of their econ-
moic base by the early 1970s and
ceased to be a major fixture on the
American comics scene.

Four years later. RAW #1 appeared.
If you weren’t among a select few who
had glimpsed the work of various
European comics artists, the spectacle
of these large, impressively repro-
duced pages—featuring the stark,
naturalistic cityscape of Jacques Tar-
di’s “Manhattan”; the exuberant com-
ic vigor of Joost Swarte, who has been
aptly described as the “warped step-
child of Herge (fintin) and McManus
(Bringing Up Father)”; the startling
expressionism of Munoz and Sam-
payo’s images of despair and human
isolation. “Mister Wilcox. Mister
Conrad” (in RAW 3); and the goofy
mayhem in Mariscal’s epic cartoons—
came as a revelation. There were
samples of other work, short pieces
by the Parisian Cathy Millet, the
Canadian Gerry Capelle, and the
Belgian Ever Meulen. that were in-
triguing suggestions of new
possibilities for the comics medium.
RAW also featured two lovely hom-
mages to the tradition of early com-
ics when it ran pages from Caran
d’Ache and Winsor McCay. These
served as a reminder of the honorable
and distinguished heritage of the past.
And there were the Americans.
Of special note, of course. were the
installments of spiegelman’s Maus that
began in the second issue Of RAW
These are not, of course, included in
Read Yourself RAW: which does repro-
duce spiegelman’s “Two-Fisted
Painters.” This is a playful tinkering
around with color registrations, abet-
ted by some amusingly melodramatic
contrivances, including an alien with
a color syphon, that justify the tinker-
ing. It’s wonderful stuff, and entirely
a propos of the magazine’s hip, arty
From Mark Beyer, there were his
disturbing strips featuring the child in-
nocents, Amy and Jordan, wandering
through a world of nightmarish land-
scapes and ominous, unpredictable
threats from all directions. (The
notorious Amy and Jordan bubblegum
cards have been included in Read
Yourself RAW.)

Finally, there was Gary Panter’s
memorable image of Jimbo staring out
from the cover of RAW #3. Panter’s
cartooning has generated its share Of
controversy in the intervening years.
His influence has been considerable
and undeniable. and when many
readers ran across the Jimbo “Run-
ning Sore” strip in RAW 3, they were
encountering an unusual of self-
expression or sensibility. Panter has
termed his “ratty” or punk approach
a calculated reaction against “seam-
less illusion,” and many have attacked
his work for a variety of reasons. My
own estimation is that Panter’s work
is painterly and, in terms of its aspira-
lions, often inspired. In RAW’: Panter
found the perfect outlet for a brilliant-
ly radical, uncompromised, “new”
approach to comics. (See the inter-
view with Panter in Journal #100.)
Read Yourself RAW reproduces a
majority of this material, including the
wonderful covers, exactly as it ap-
peared in the original issues. As a
special treat. there is also a wonder-
ful new Read Yourself RAW cover by
spiegelman. All of this is good news
for those who missed out on RAW’s
early issues and have found collector
prices for those early issues beyond
their means.
Missing are a few pieces that have
not been included in the collection.
Mark Newgarden’s “Mutton Geoff’
from RAW I was a good use of
familiar icons (Mutt and Jeff) for pur-
poses that brilliantly transcended
parody, and I was sorry to see it ab-
sent here. Drew Friedman’s ‘ ‘Comic
Strip” from RAW 2 is missing as well.
A happy choice might have seen
Friedman’s friendly satirical jabs at
spiegelman and Mouly exchanged for
the tiresome Andy Griffith satire,
which is included. (The Griffith satire
also appears in Any Similarity To Per-
sons Living Or Dead, but, to my
knowledge, “Comic Strip” has not
reprinted from its initial appearance
in RAW.) Some Rick Geary material
that has been reproduced elsewhere
has been dropped, along with some
pages from Kaz that will soon appear
in Buzzbomb. Several text-oriented
features, a handful Of more purely
conceptual pieces. and a few less ac-
cessible strips (like Ben Katchor’s
“The Atlantic Ocean Laundry”) have
also not made it into the collection.
These are not quibbles, just notations
for those who observe such editorial
matters closely.