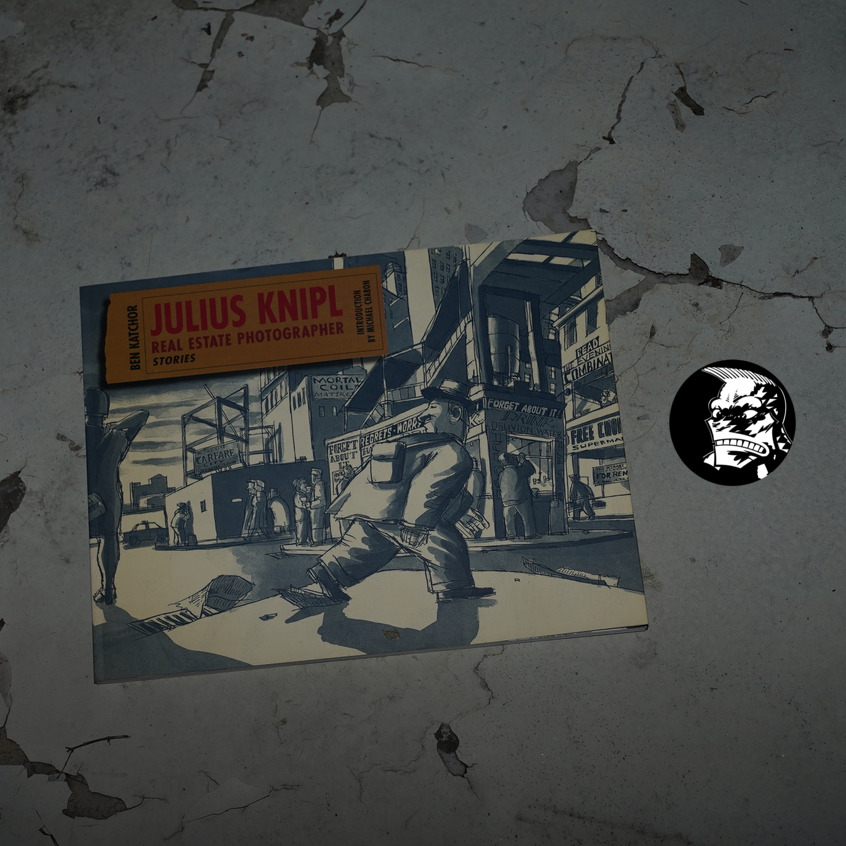 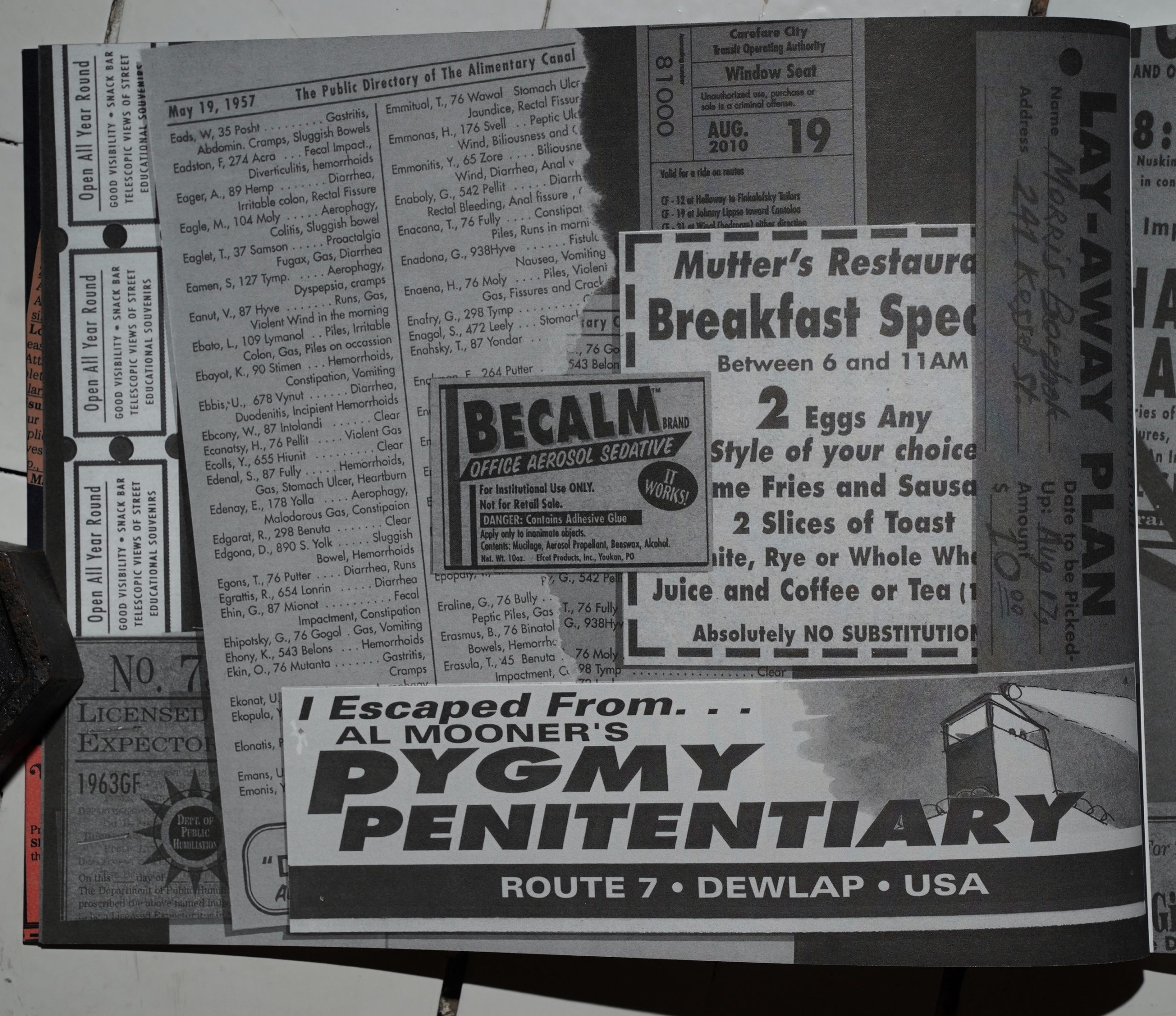 This book (published by Little, Brown) was exquisitely designed by Katchor himself. He sounded pretty disappointed with the design of his first book (from Penguin), so it’s understandable that he wanted to do it all himself this time around. 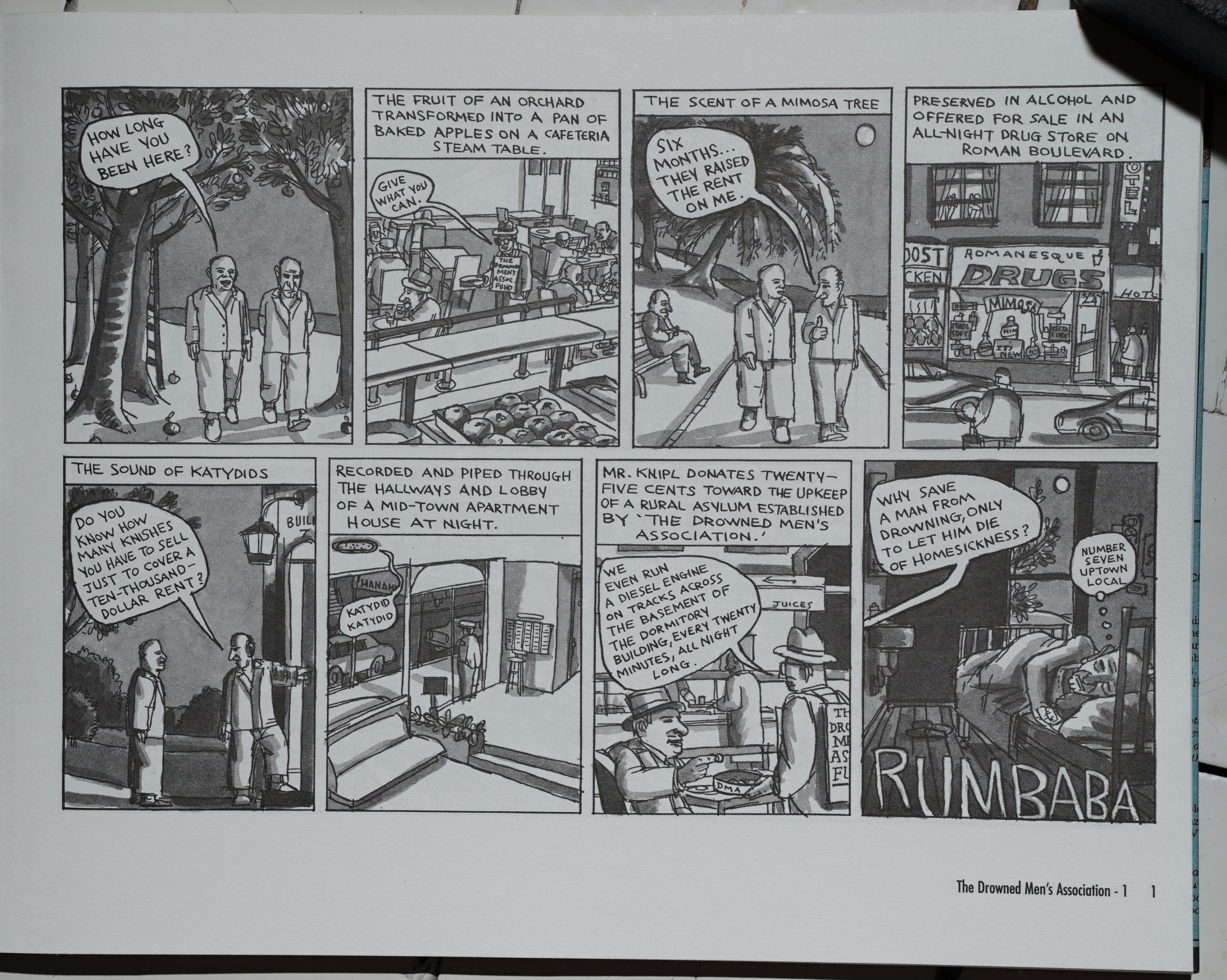 The first book had a slightly gimmicky design with an object that took up portions of each page, which meant that the strips themselves were reproduced in a pretty small format. In this book you can actually see all the details in Katchor’s artwork, and really enjoy the sensitive brushed grey tones. 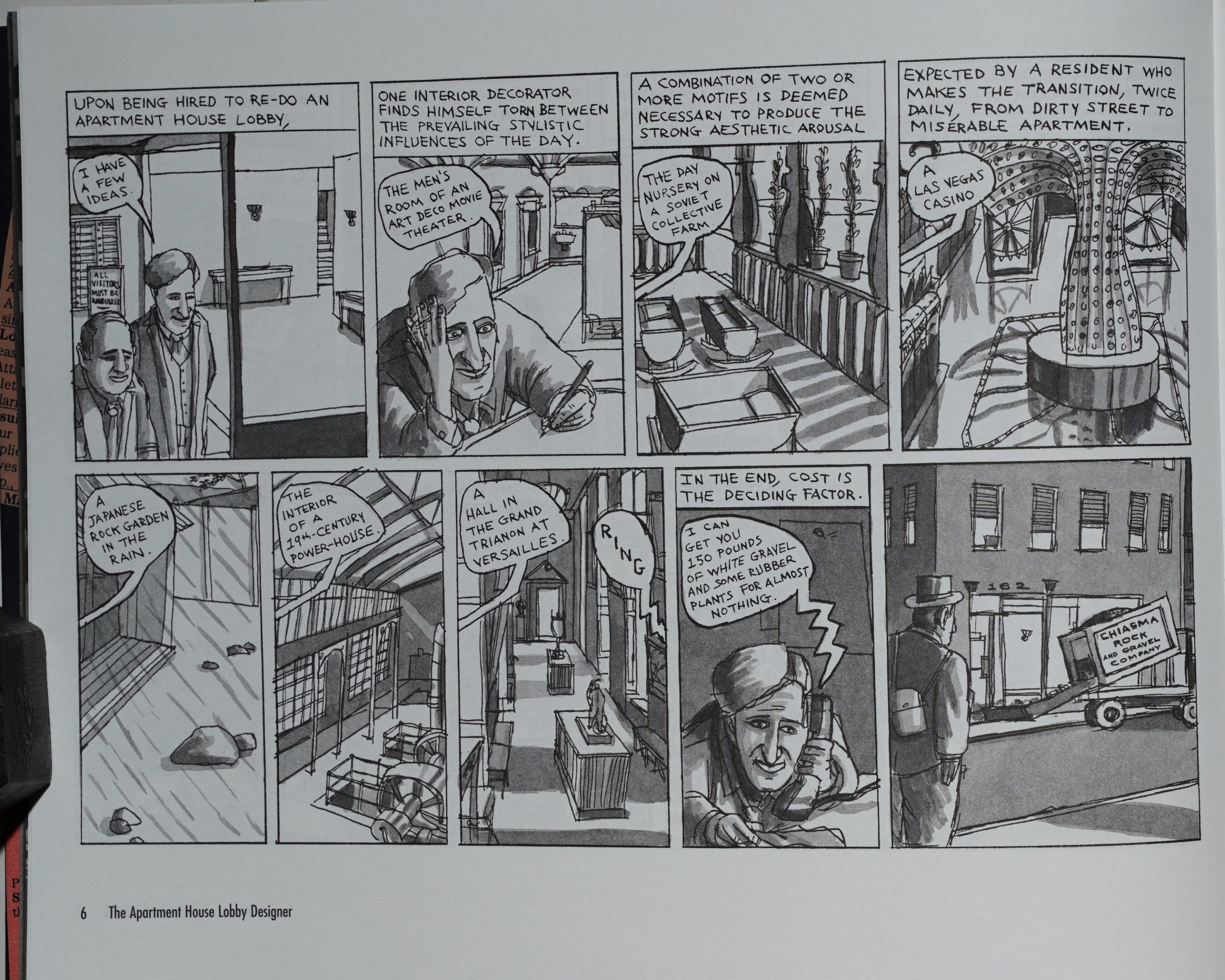 The tribulations of a lobby designer… Each page is its own little story — complete with new characters, some drama, something funny: It’s exhausting to read this book. After reading ten of these, my mind just kinda shuts off, because not only are the pieces so rich in content; they’re sufficiently dreamlike that they have a soporific effect. 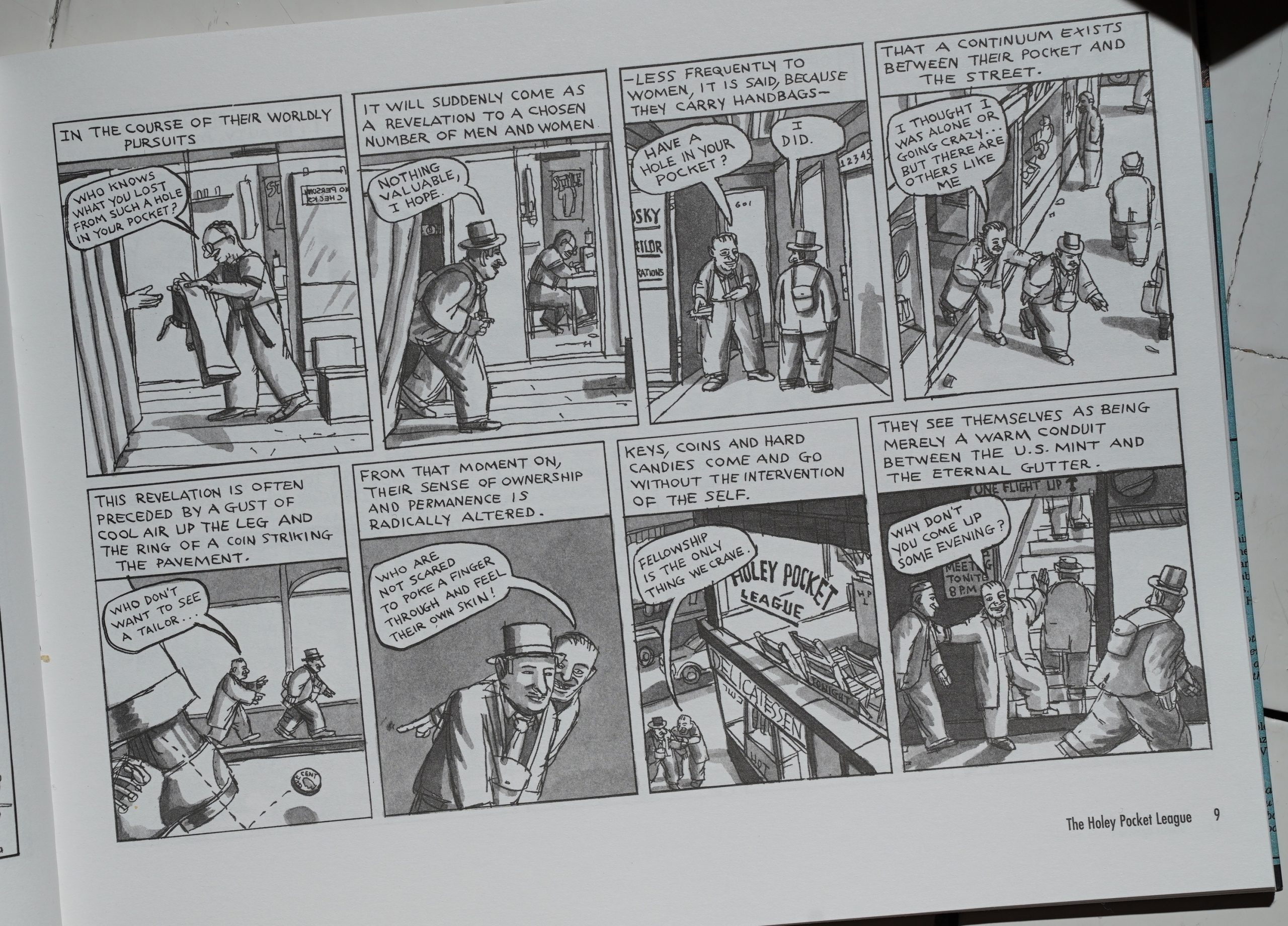 In a good way! They strips are never boring; they’re relentlessly inventive, but it took me an entire night to read this 100 page book. 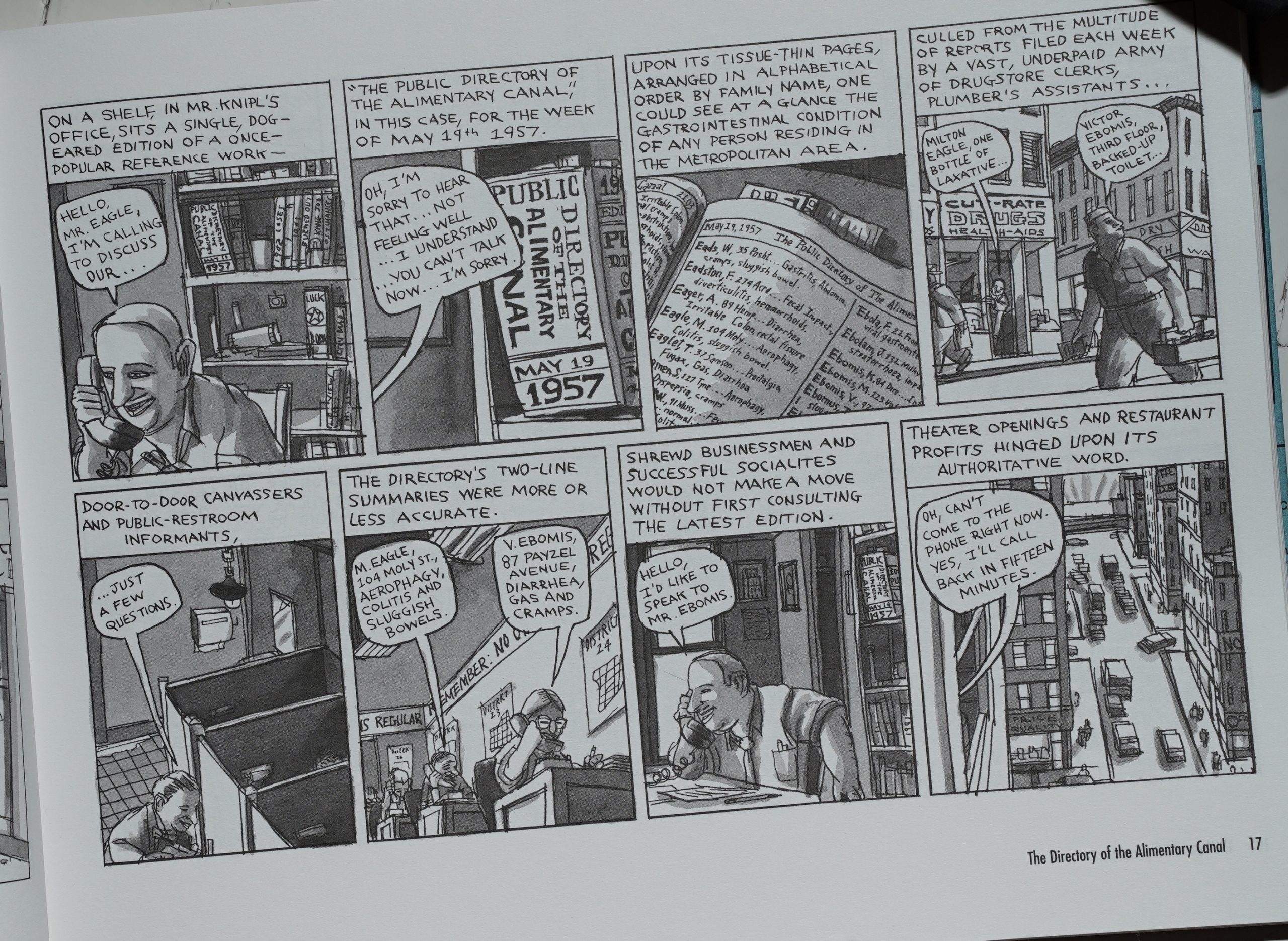 I mean… that logic… 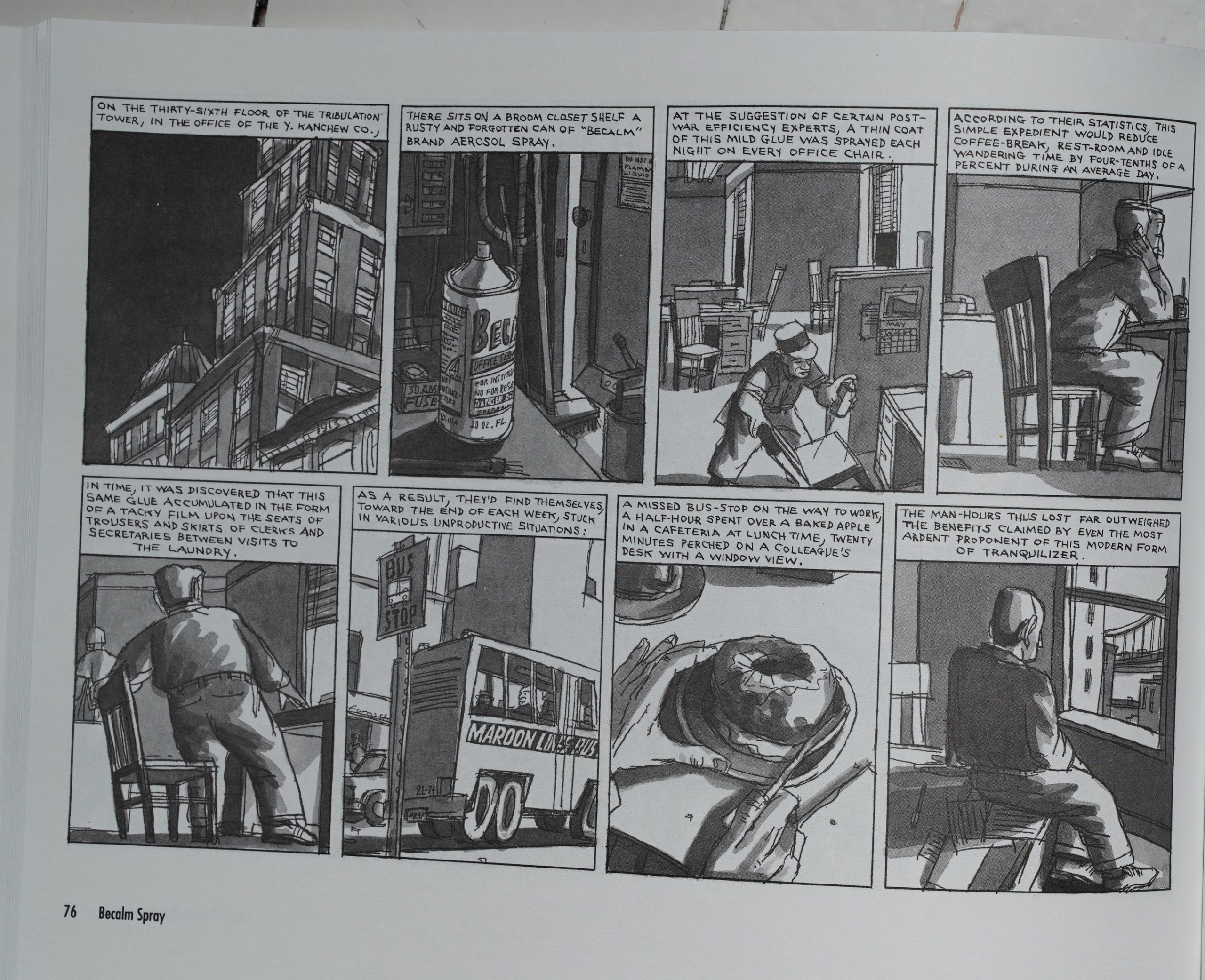 Don’t give Jeff Bezos any ideas! 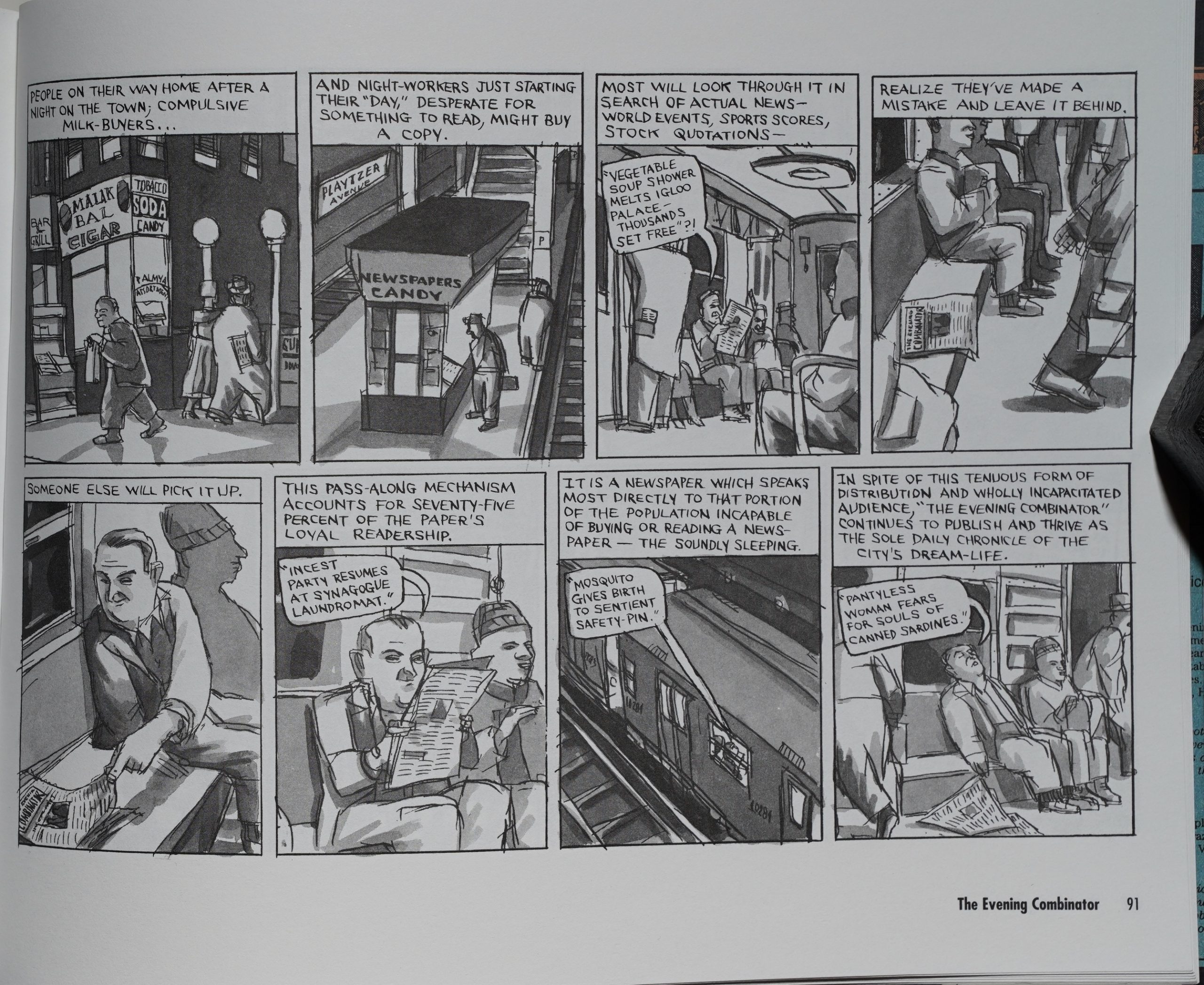 Finally, we get a sixteen page story about… a newspaper that only prints dreams, and we’ve kinda come full circle: The dreaminess underlying all these strips becomes the actual subject.

Reading this book puts you (I mean me) in a very peculiar state of mind. Everything seems to grow silent; everything slows down a bit. It’s kinda magical.

With accompanying panels from
his strips continuously projected
behind him, he immediately draws
the audience into his fictive city,
which is always New York, no
matter how different the names
The first half of the lecture
discusses the importance of remain-
ing a tourist in one’s own city. The
speaker raises to epiphany the mo-
ment of approaching an intersection
from an unfamiliar direction, a con-
cept that informed the entire evening.
Progress and man’s reaction to it are
the basis for most ofthejokes and the
false histories.
I don’t mean to treat the pro-
gram as a serious lecture. Still less do
I want the speaker to be mistaken
(necessarily) for Ben Katchor; the
man who vigorously inveighed
against the travel industry and the
Galyak travel agency in particular
that evening bore little resemblance
to the soft-spoken, perpetually
rumpled individual who afterward
signed copies of his books and drew
head-shots of Julius Knipl looking at
something in the middle distance.
First and foremost, the lecture is an
entertainment, filled with Katchor’s
strange characters, places and prod-
ucts. Harold Alms, impromptu
speaker, is mentioned, as is the
American Tapeworm Sanctuary
over on Purkinje Island.

One further note: as enjoyable as
the lecture was, the audience was a
story in itself. In opposition to a
traditional comics-related event,
Katchor’s lecture was attended by
elderly couples, orthodox Jews,
middle-aged men in suits, and only
the occasional twenty-something
comics reader (like your humble cor-
respondent). Prior to the lecture, a
number of attendees discussed the
significance of the Julius Knipl com-
ics in their lives. Several recounted
their “first time,” reciting the text of
the strips verbatim. The reverence in
their voices offered up some (al-
though probably deluded) hope for a
mature comics readership.

The monthly radio drama based on Ben
Katchor’s Julius Knipl, Real Estate Photog-
rapher strip has been canceled by National
Public Radio after one season. Katchor and
Weekend Edition producer Cindy Carpien
said that from the beginning, the show failed
to generate much response from listeners,
which Carpien termed highly unusual both
for NPR and for such a unique show.
“We felt that this was something different
and wonderful,” she said, “and that eventu-
ally people would understand it and come to
like it.”
But that never happened on the scale
those involved with the program had hoped
for. For the occasional Knipl nay-sayer, the
last straw came with the next-to-last install-
ment of the show, which featured an imagi-
nary telephone book containing the gas-
trointestinal condition of everyone in the
city.
“I guess if you missed the first 15 sec-
onds, it sounded like One long bathroom
joke,” Katchor said.
The result was a handful of e-mail mes-
sages, wondering how NPR could stoop so
low as to put such “toilet humor” program-
ming on the air. But Carpien emphasized that
it wasn’t the negative comments about Julius
Knipl that bothered her but the lack of com-
ments in general — ‘ ‘in the end, most people
didn’t get it,” she said.
Ironically, after Carpien and Julius Knipl
producer David Isay made the decision to
cancel the show, the announcement prompted
“a flood of response” from people in support
of the show, although Carpien said the reac-
tion was still only a small percentage of the
audience.
Fans of the show, however, can take heart
. that a collection of the episodes will eventu-
ally be released on compact disc. And
Katchor plans to experiment with Julius
Knipl in yet another format, as he hopes to
put together an animated version of the strip
using many of same performers who worked
on the radio show.

This apparently never happened? I wasn’t able to find the CD, anyway.

When first happened
upn Ben KatcWs vwrk
a few years ago in a
weekly paper, my
reaction was one of complete indifference. Nm•,’ that
I’m cornpletely comerted, I feel obracFd to enthusztkally
recommend Katchor’s second collection of Julius Knipl,
Real Estate Photographer Strips — partially out Of
embarrassment for not having appreciated the str$s
brilliance Sooner. but also because reading such a
concentrated dose Of Ketchor might instantaneously do
the trick for someone else.

As for Katchor’s art, there’s something seamless
about the way it blends in with the content of the
strip. The weary, tilted lettenng and washed-out greys
both serve to reinforce the melancholy that envelops
Julius Knipl. Still. it’s hard to identify or
describe what makes this latest book — which, by the
way, contains a 17.paqe Story unlike anything seen
before from Katchor —so powerful for me. Do
yourself a favor and buy it.

Julius Knipl, Real Estate
Photographer is, without a doubt
in my mind, the most literate,
intelligent and consistently im-
portant weekly comic strip to
have emerged since Feiffer. That
so few papers and readers have
recognized that fact at this point
is only an indicator Of how
oblivious people become when
they fail to search for the signifi-
cance of what’s right in front of
their noses.

This volume is much wider and taller than the first collection and beautifully presents Katchor’s strips at a generous size, in landscape format, allowing greater involvement with the content.

The book was reviewed positively by the New York Times at the time:

With such tales, Mr. Katchor captures not only the poignancy of lives that have fallen short of expectation, but also the poetry of those seemingly inconsequential lives, sunk in the everydayness of ritual, routine and habit. He has written a funny, touching and compassionate ode to the city and the anonymous people who live there.