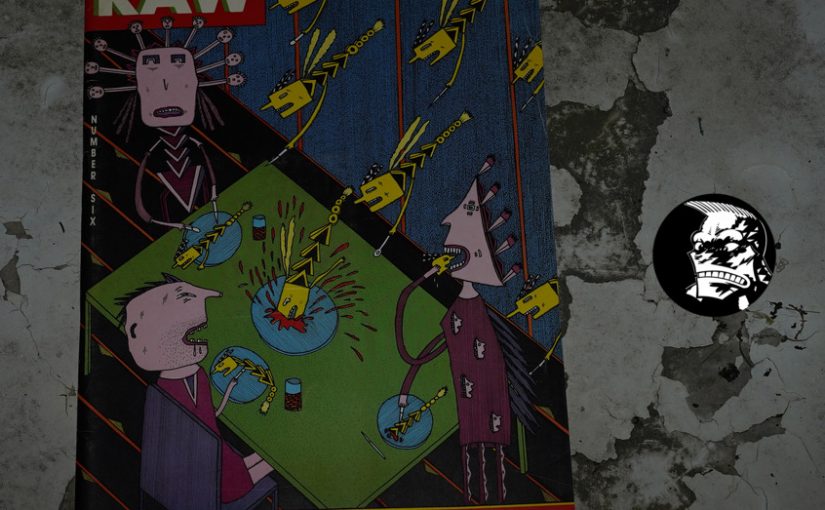 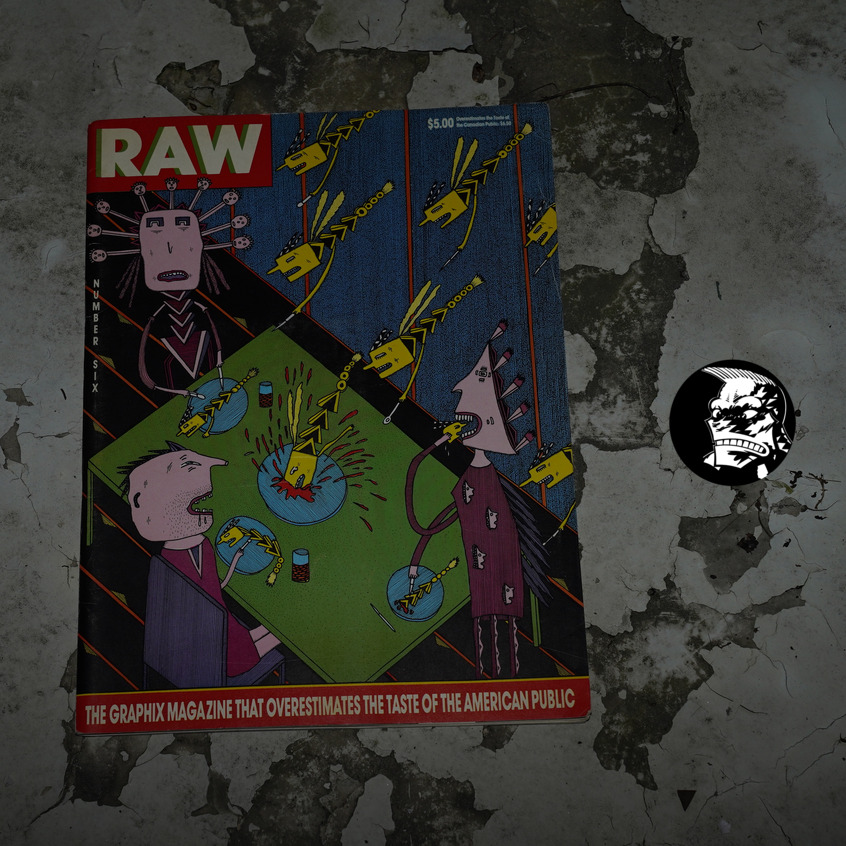 Raw #6: The Graphix Magazine That Overestimates The Taste Of The American Public edited by Françoise Mouly and Art Spiegelman (269x359mm)

This is it: This is the first issue of Raw I read, and I was 15, and I thought it was the most amazing thing ever in the history of ever.

Sure; I’d read good comics before — Varenne, Hernandez, Pratt, etc — but this was something completely different.

Just look at that cover. Look at it! 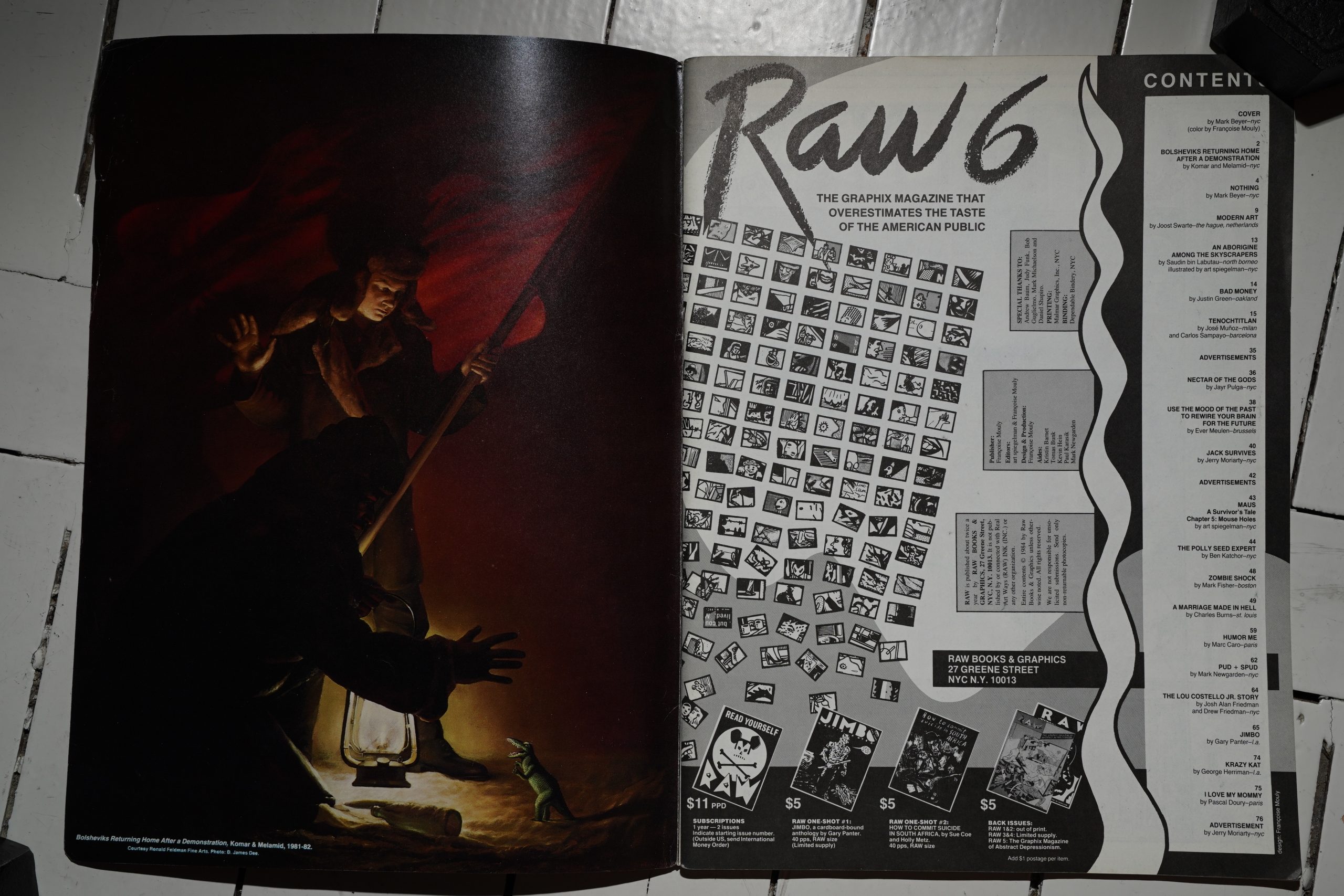 And just look at this opening spread: A gorgeous, but very mysterious painting (Komar and Melomid), and a very stylish contents page. (And a way to buy older issues and sign up for a subscription. And… no extra charge for sending to non-US addresses! *gasp*) 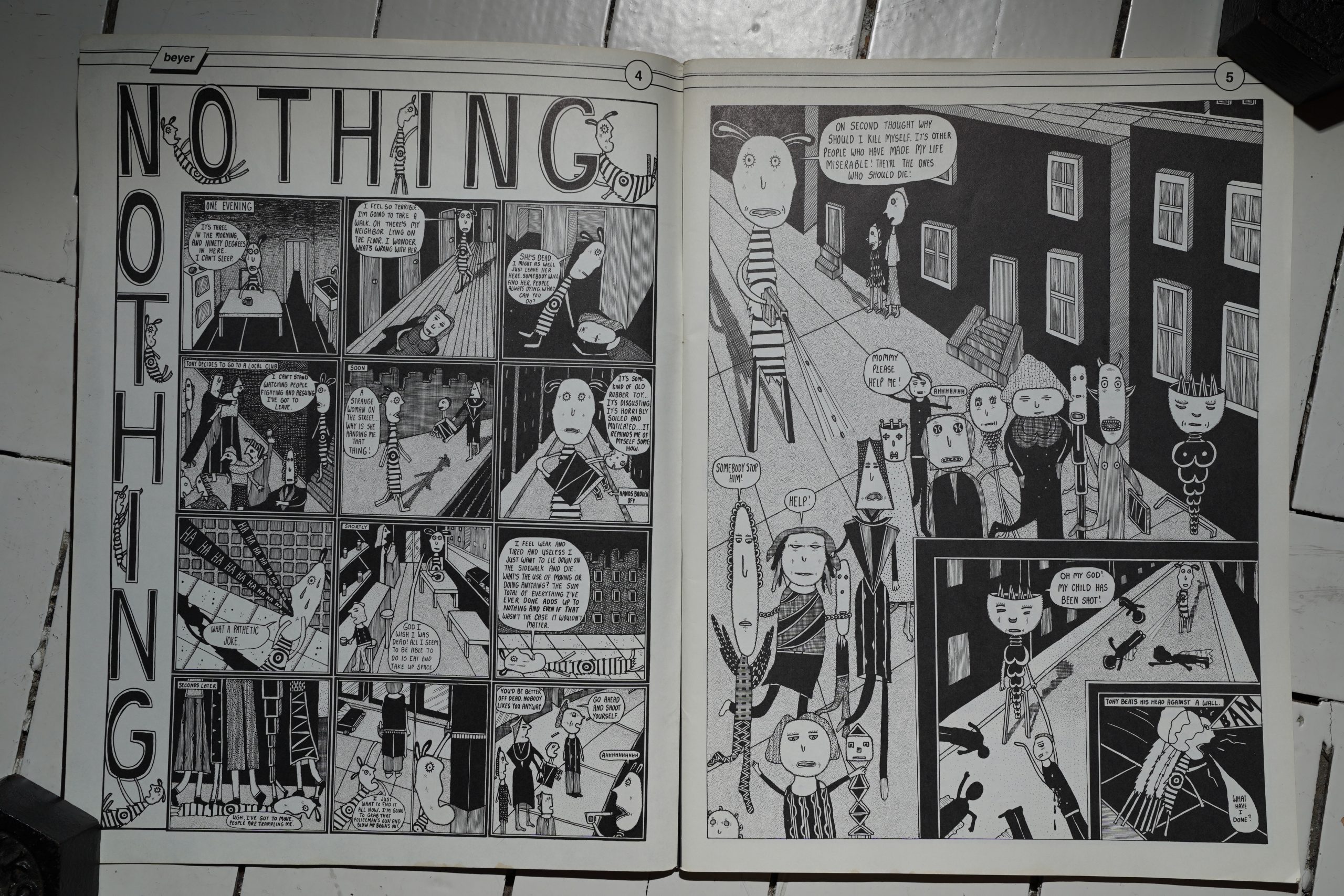 And then we’re off with a five page Mark Beyer story about Tony Target: I can’t imagine anything more perfect for a pretentious fifteen-year-old. It mixes angst and ridicule of that angst perfectly. “It’s disgusting… it reminds me of myself somehow.” And then Tony lies down to die, but people walk all over him, so he gives up on that idea.

I remember reading this book over and over again, feeling very smug and smart indeed. 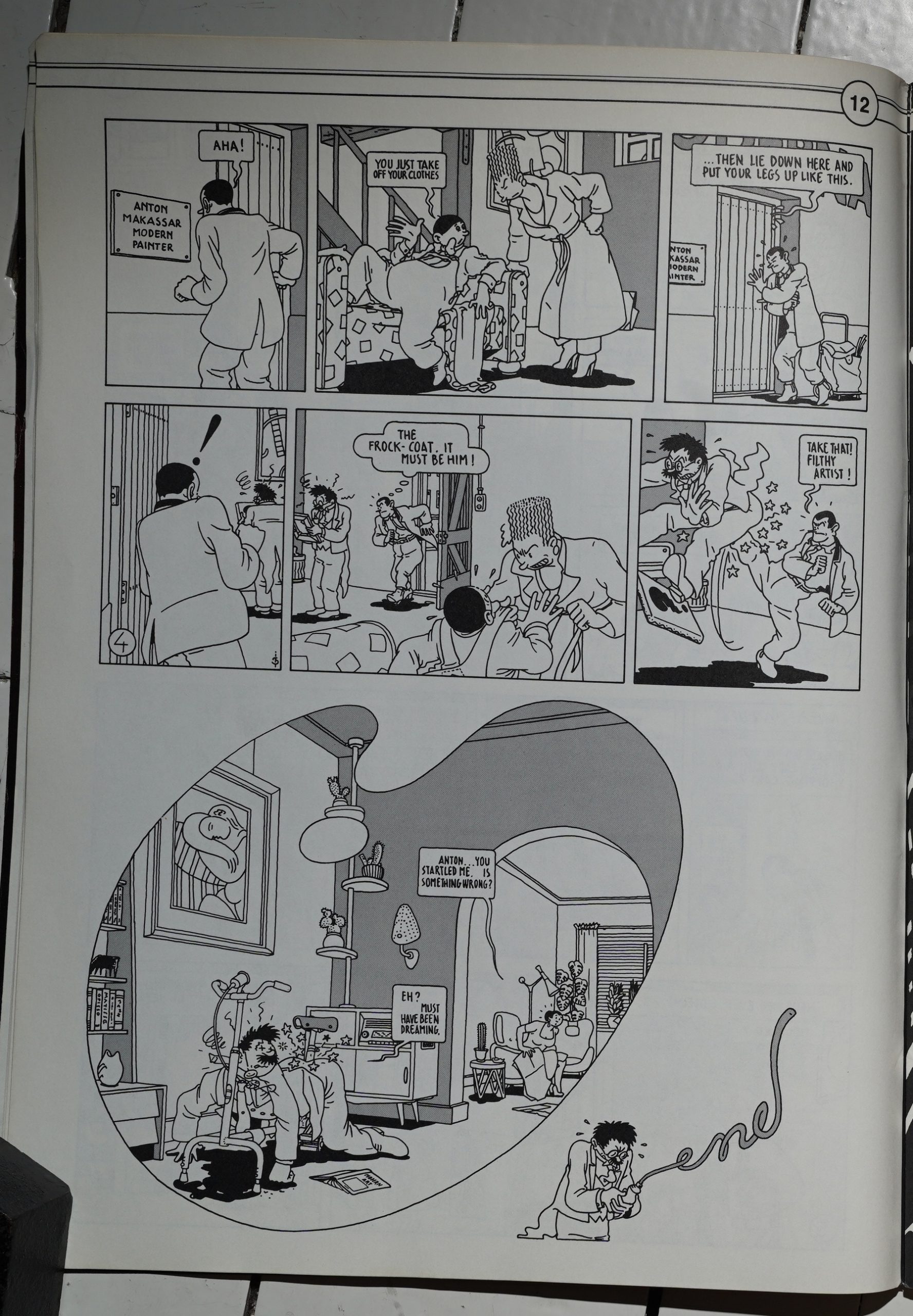 And then a Joost Swarte thing! What! I remember being so thrilled at seeing somebody working in the Herge idiom, but doing something modern. 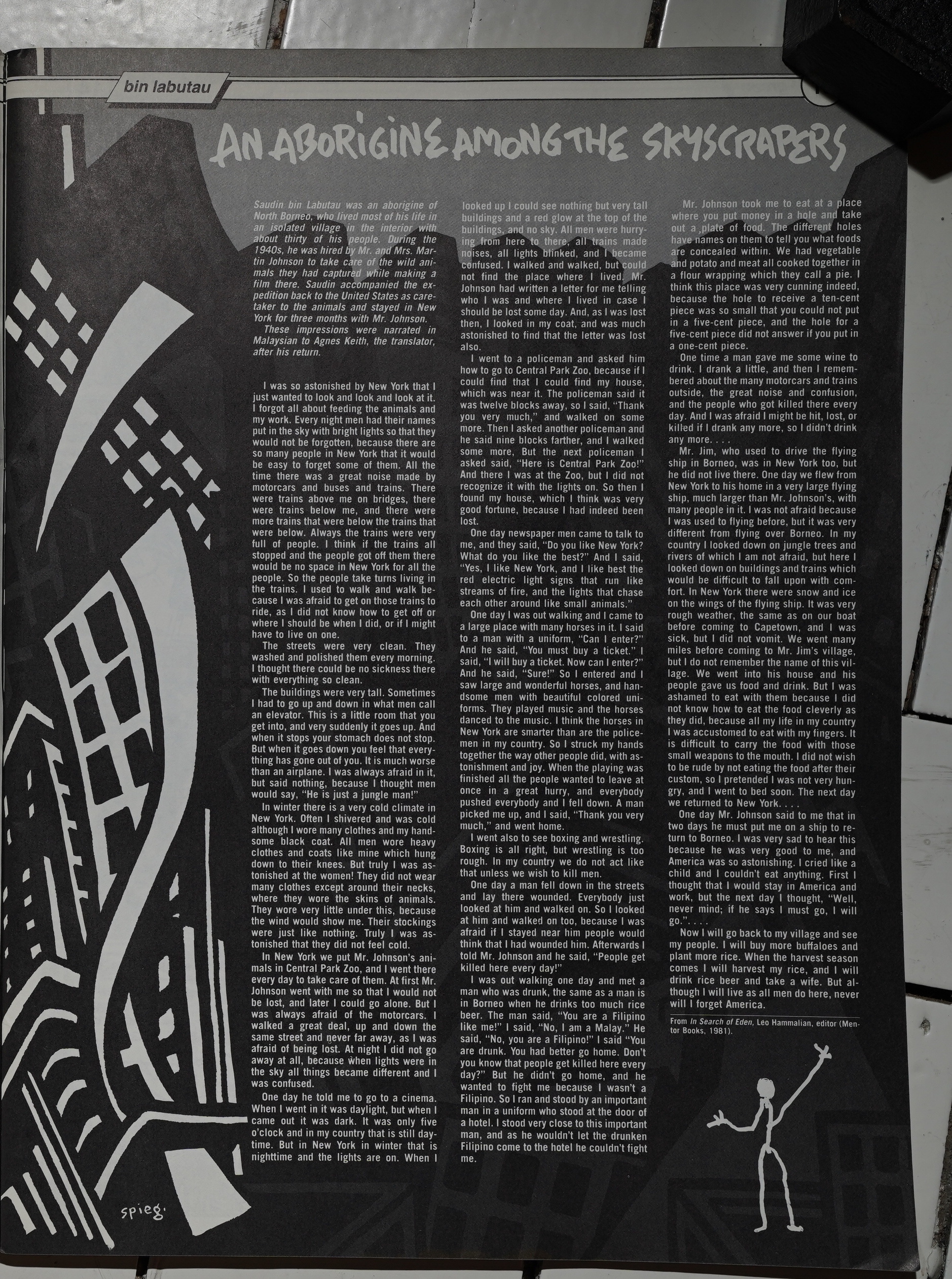 There’s only a single text page here (a story about somebody visiting New York, which I identified with immediately). 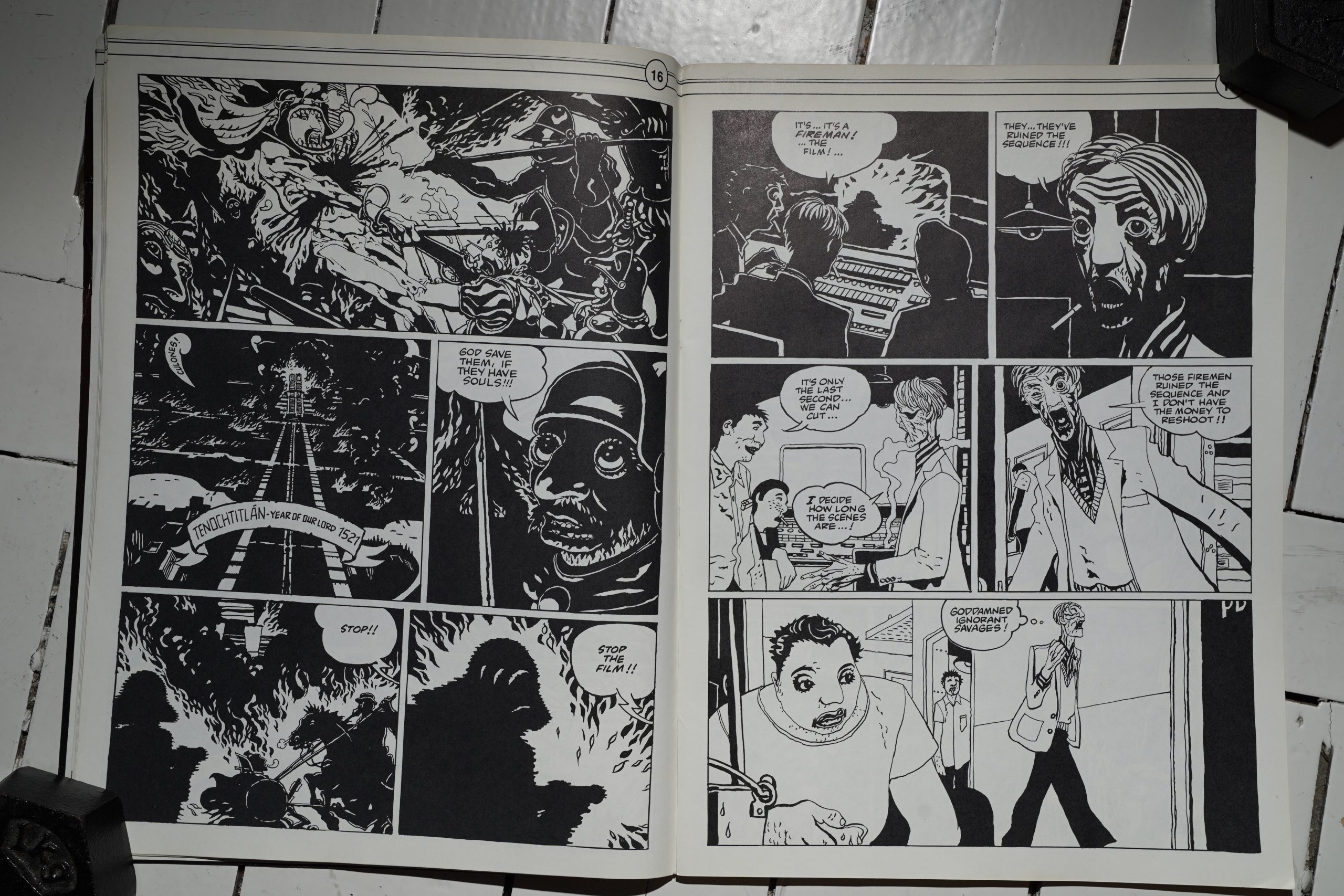 I’d never seen Muñoz and/or Sampaya either, and they have the longest thing in this issue: A 20 page story about a deranged European director working in Mexico. Reading it now, I guess it’s really a story about Alejandro Jodorowsky? The artwork’s so thrilling. 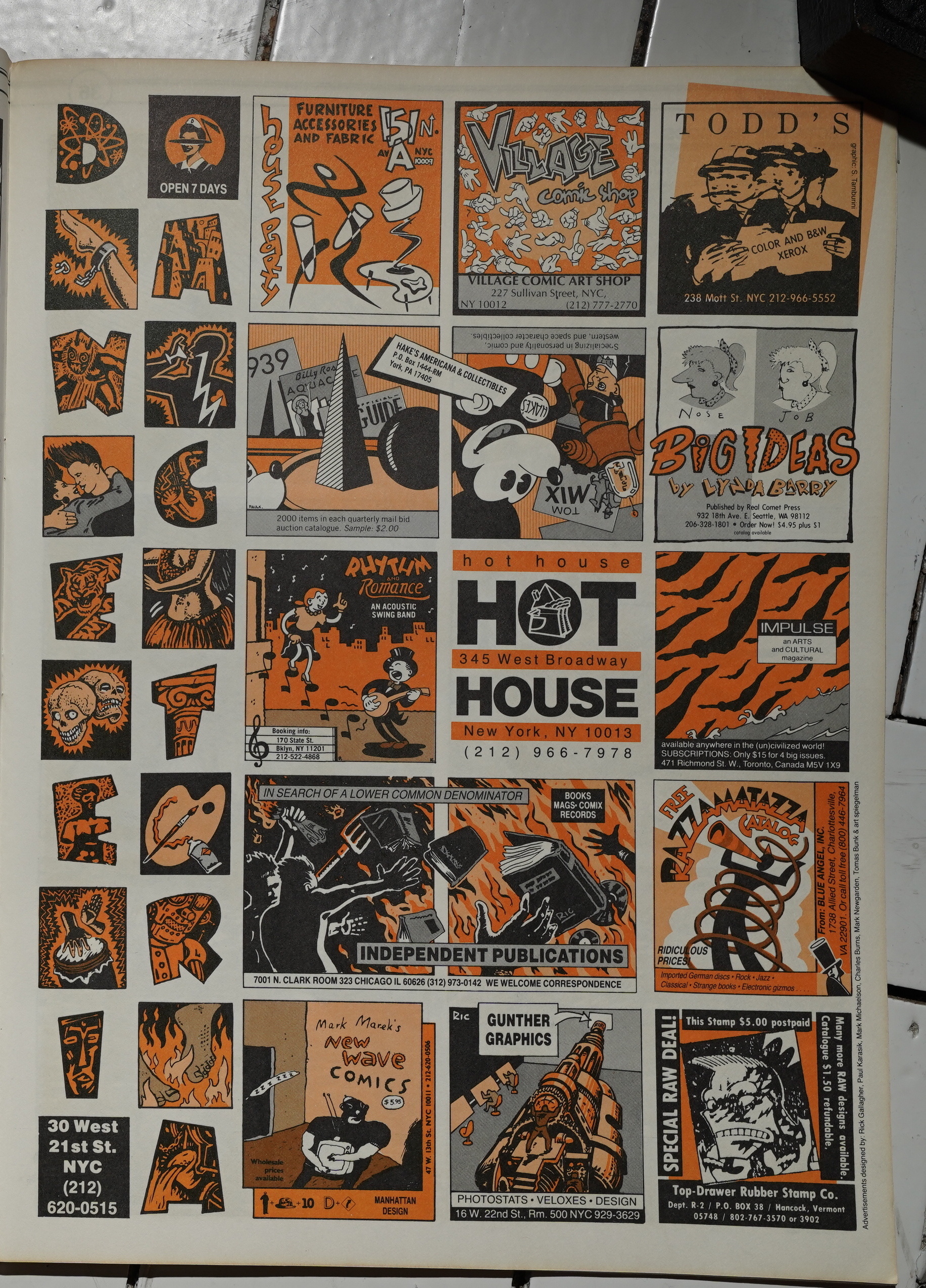 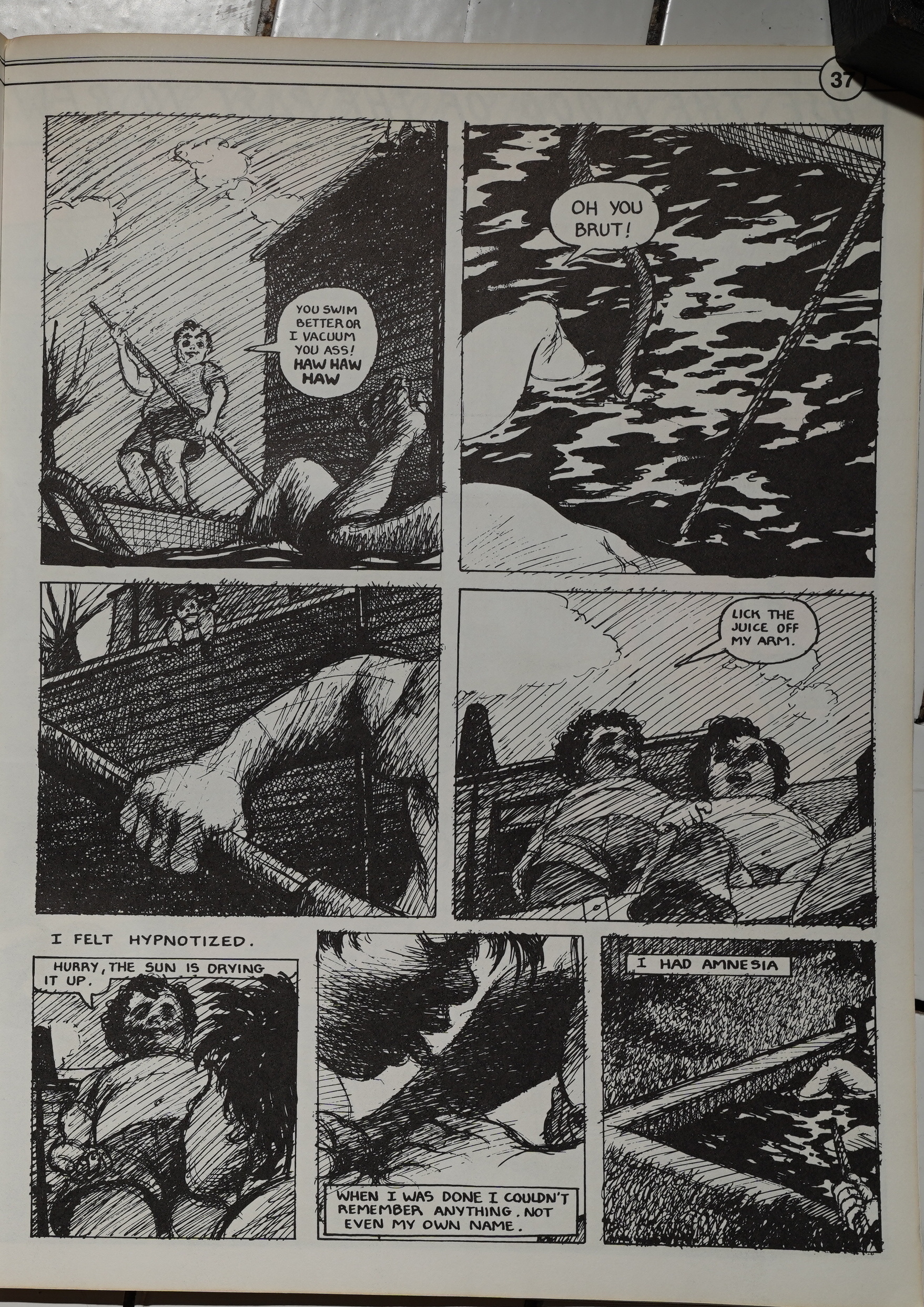 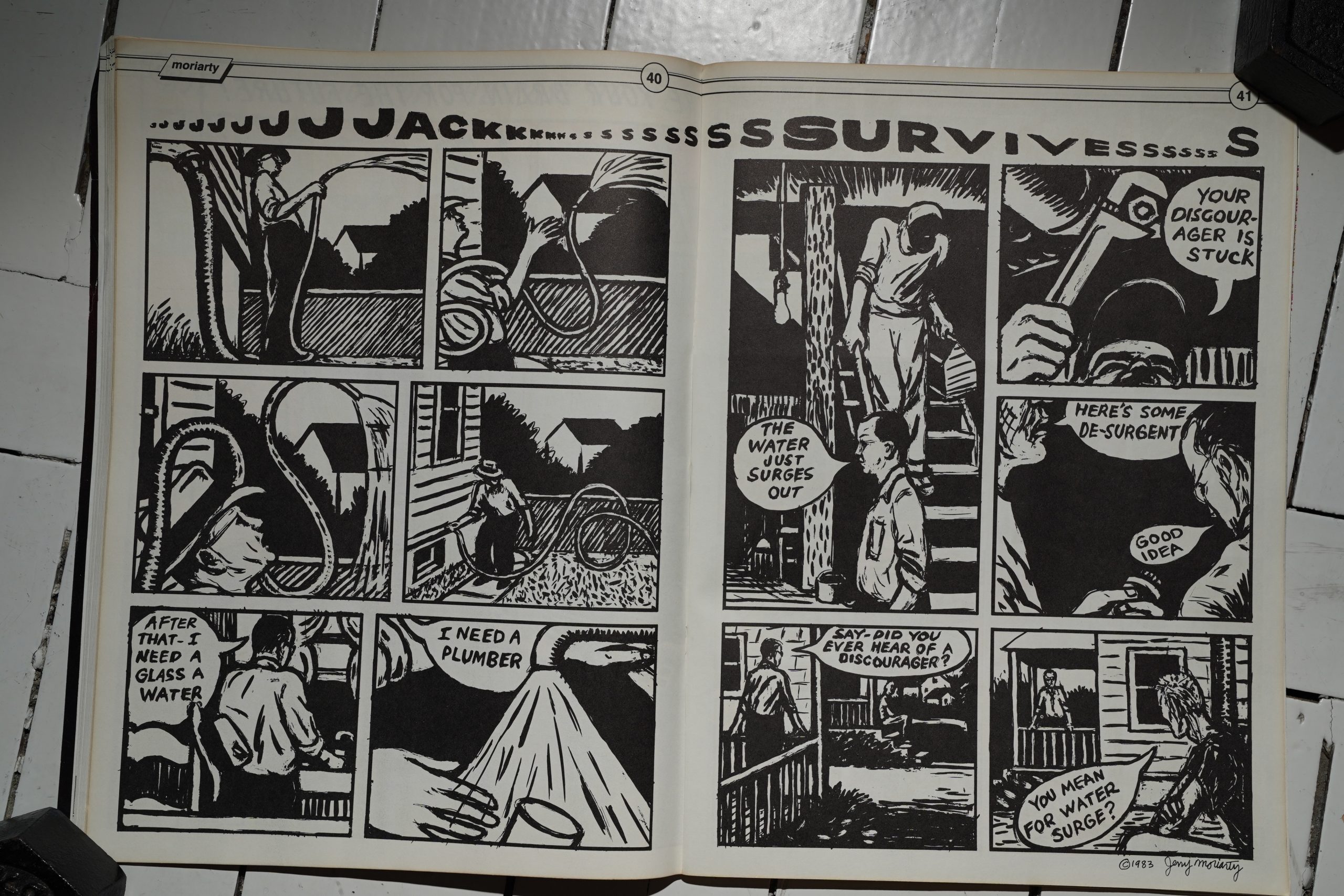 I guess this two-pager by Jerry Moriarty is really just a funny anecdote, but it conveys so much through gestures. It’s gorgeous and somehow meaningful. 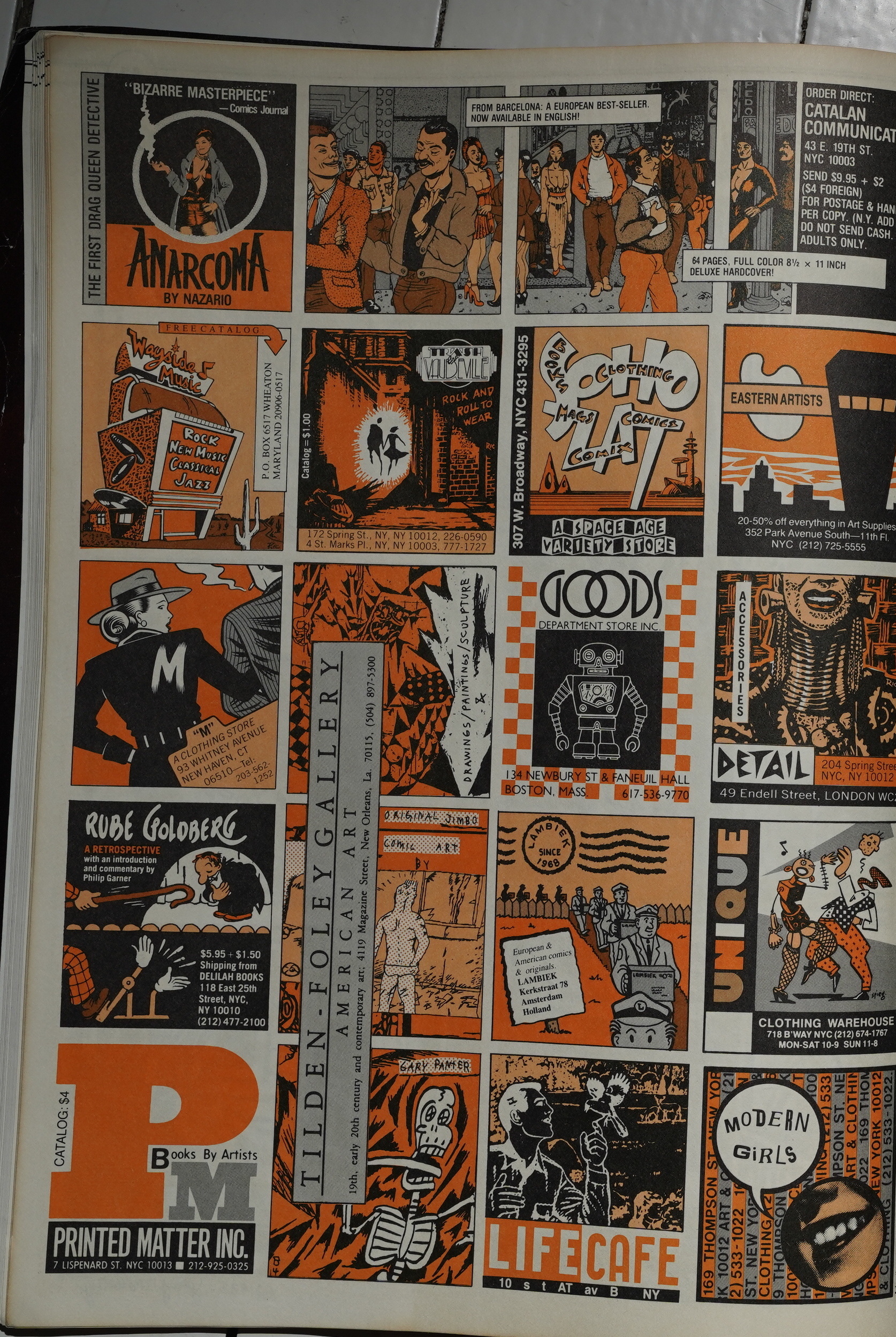 Anyway, the preceding pages were all well and good: Fabulous artwork with an oppressive (and exhilarating) mood… but that didn’t prepare me for the Maus insert, which is just heart-wrenching. 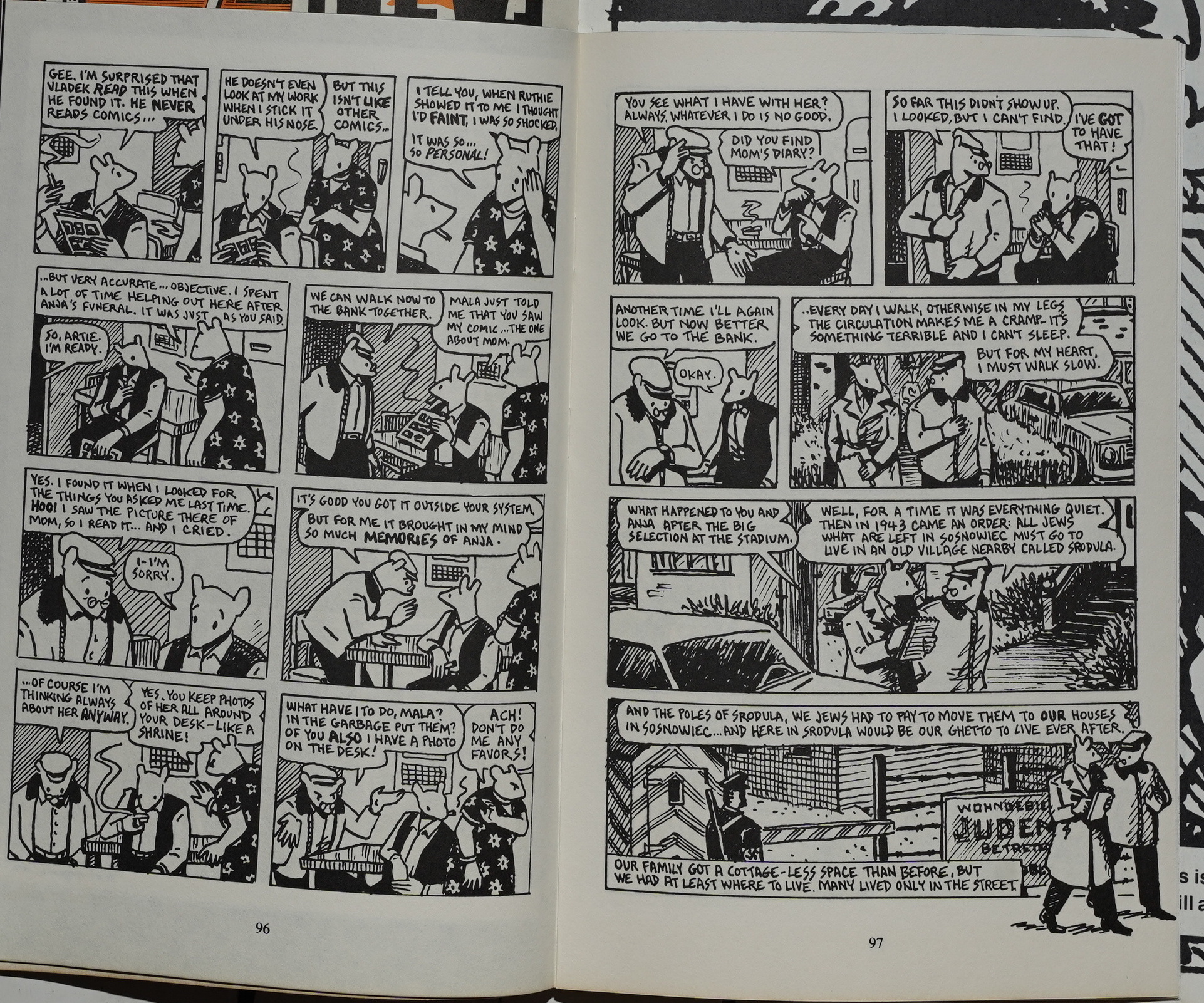 Reading it now, I can’t help notice that Spiegelman has both his step-mother and his father complimenting him on his Prisoner on the Hell Planet strip, which seems… er… slightly gauche? If I remember correctly, it was stuff like this that put Harvey Pekar off Maus and made him, for a couple of decades, the only person who dared say anything negative about Maus.

This chapter covers many of the same things Spiegelman previously had done in his “Maus” short a decade earlier, and it contradicts that strip in various small ways… 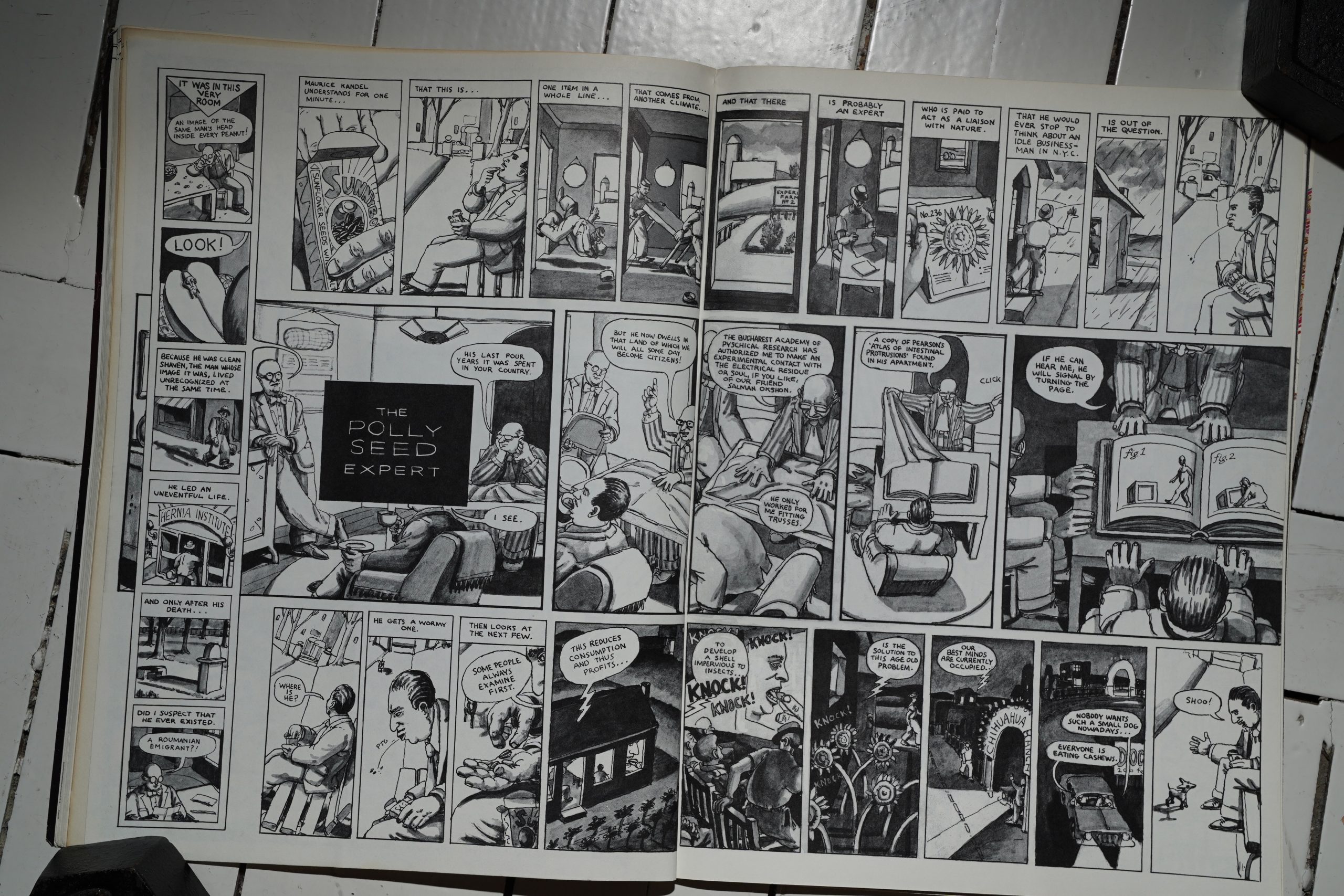 Things get a bit lighter with an intricately told Ben Katchor four-pager. I mean, it’s not hard to decipher, but it’s a very interesting reading experience. 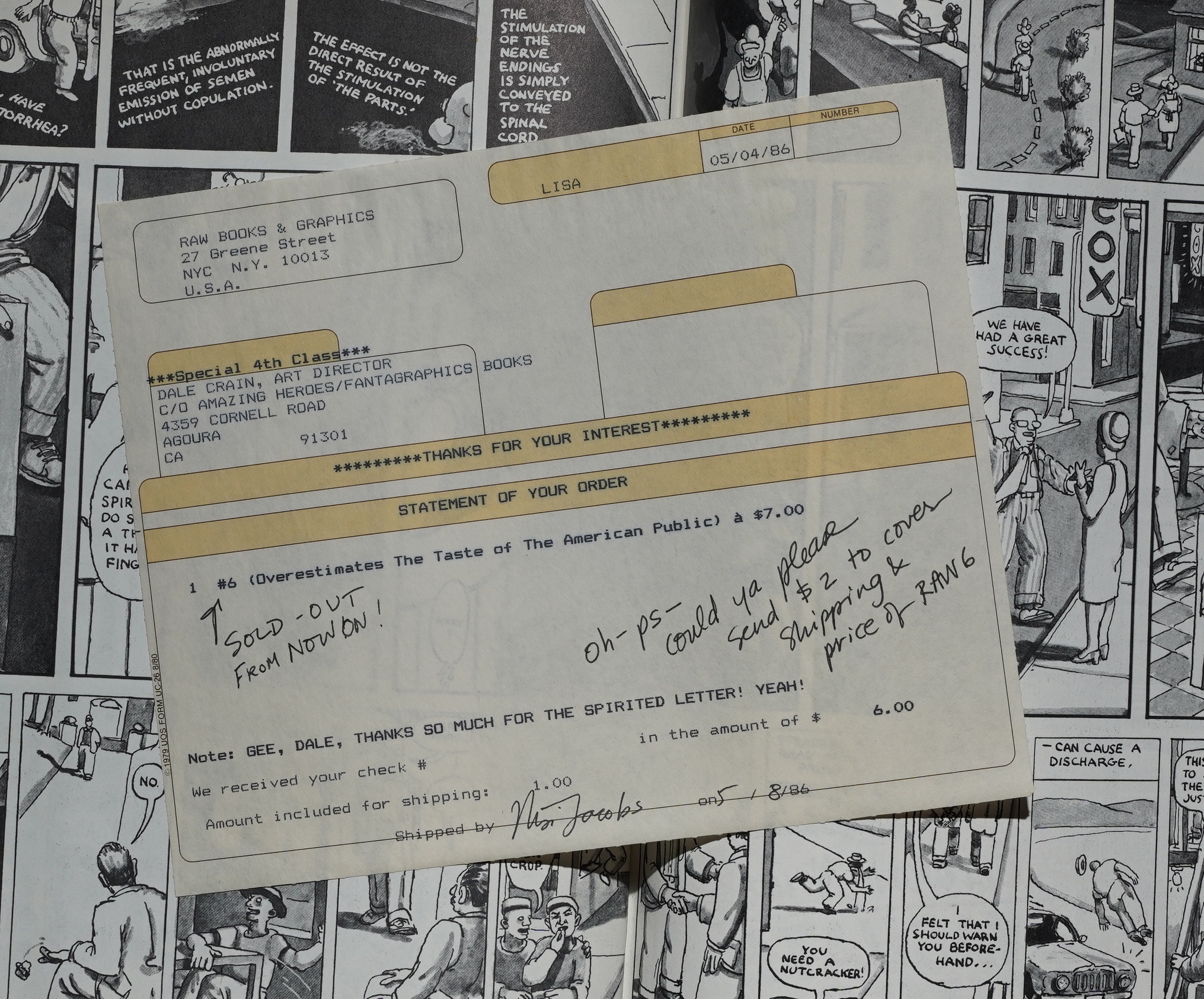 Oh, yeah, this isn’t the copy I had as a teenager — I’ve got that framed on the wall here. Instead I got a new copy for reading, and… This one is from the Fantagraphics collection!? Or Dale Crain’s collection. Tee hee. Didn’t buy it until two years later, though. 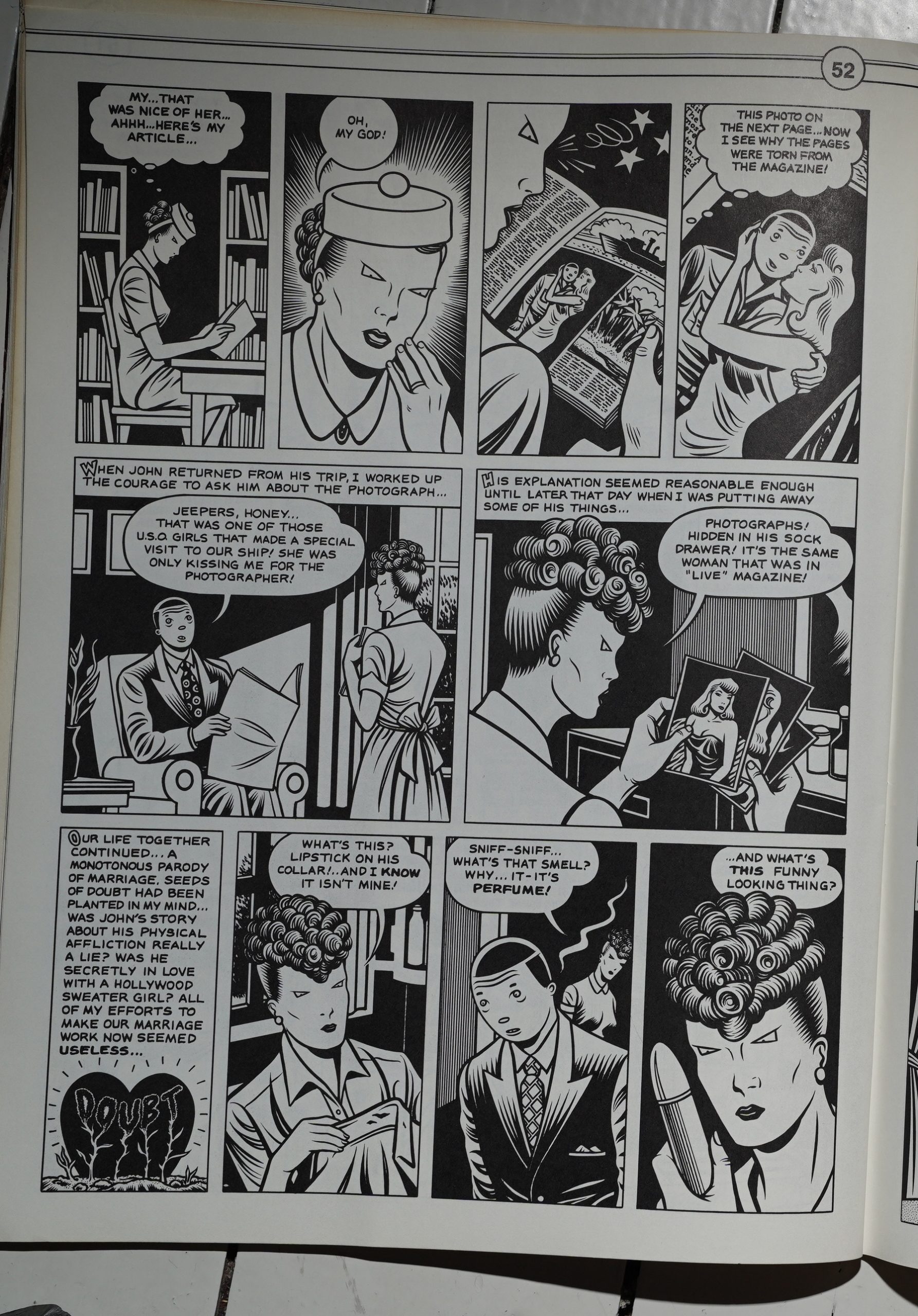 Charles Burns shows up and does an amusing riff on 50s Romance (and Horror) comics. Look at those lines. So sharp! 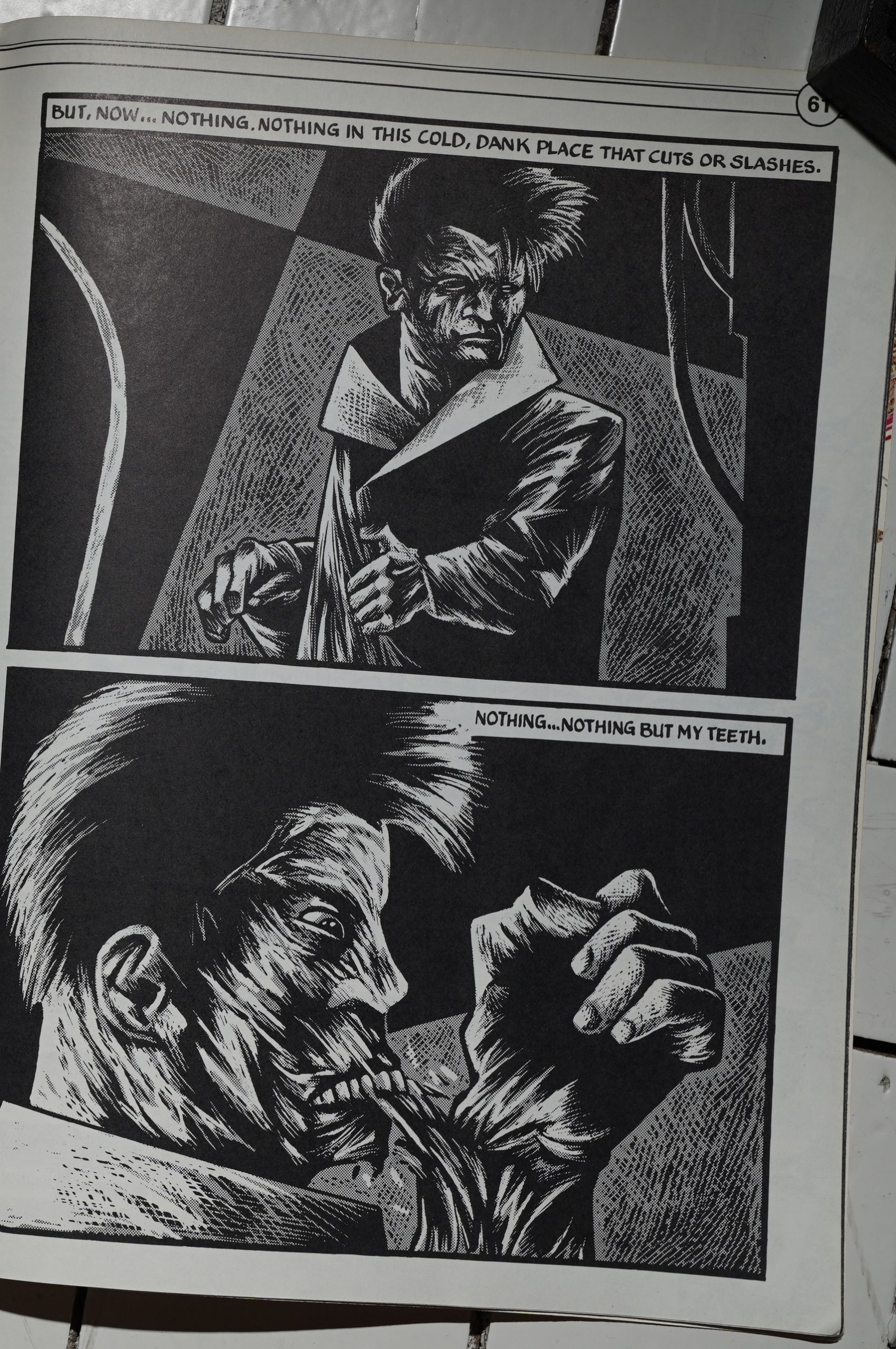 Caro takes the angst to 11. 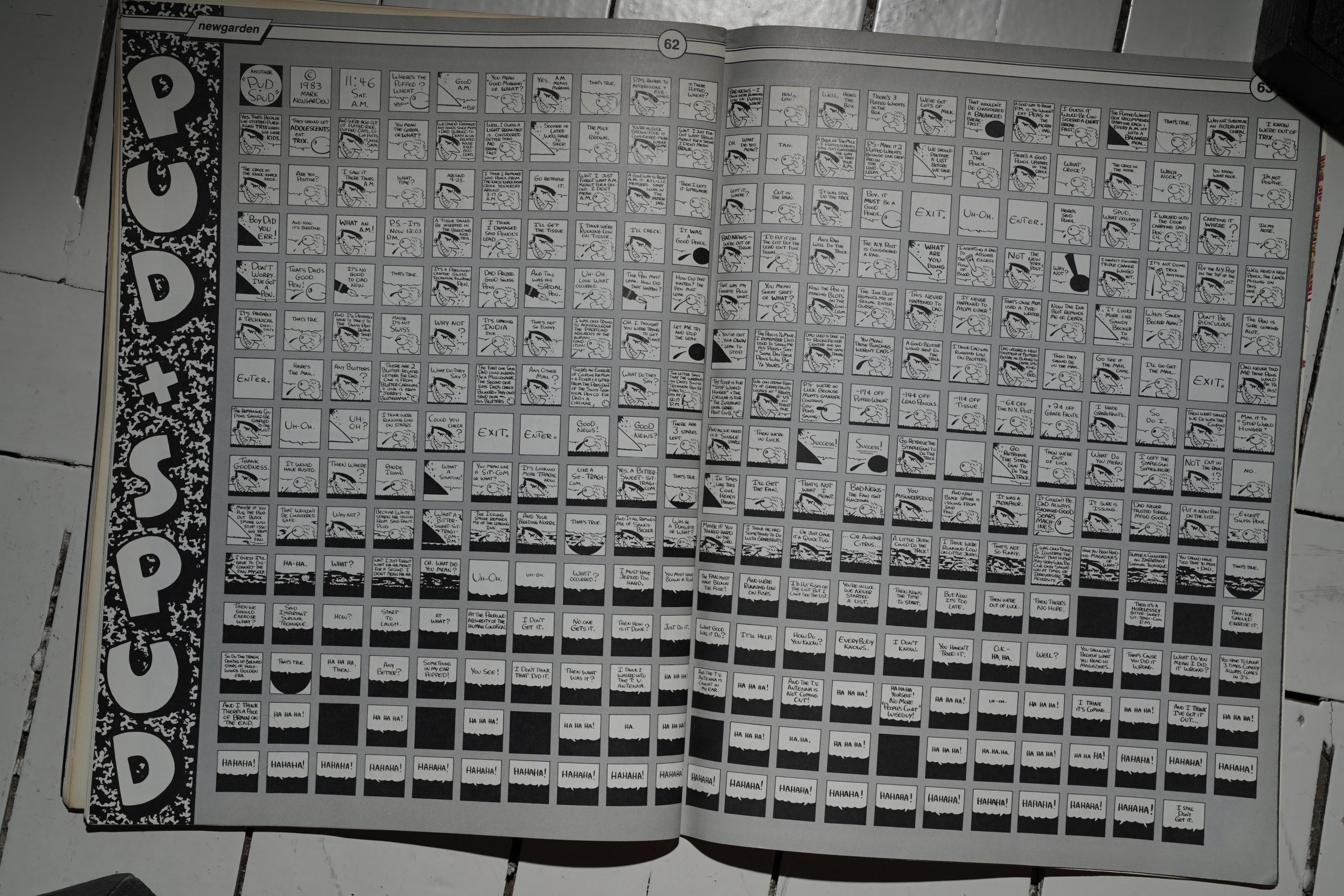 Mark Newgarden also did one of these strips for Bad News #2 (which I got shortly after I got this book)… I guess it’s a skit, basically? I remember just being fascinated with it all, and I still am. There’s some good jokes in there. 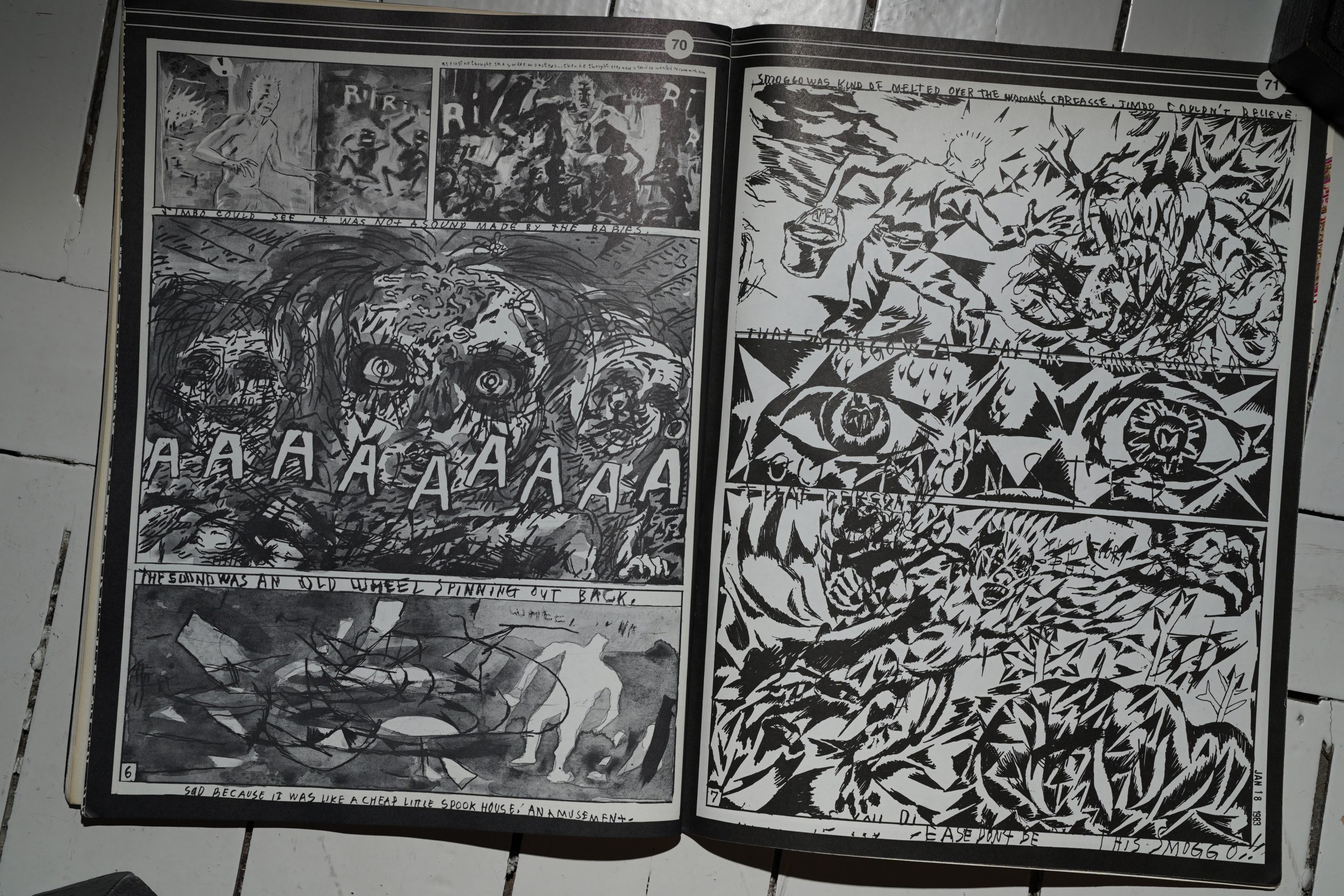 And then Gary Panter does a few more pages of his Jimbo story. Reading this totally out of context, as I did at the time, it came off as a punch to the stomach. There’s so much here, and it speaks directly to everything in my brain. 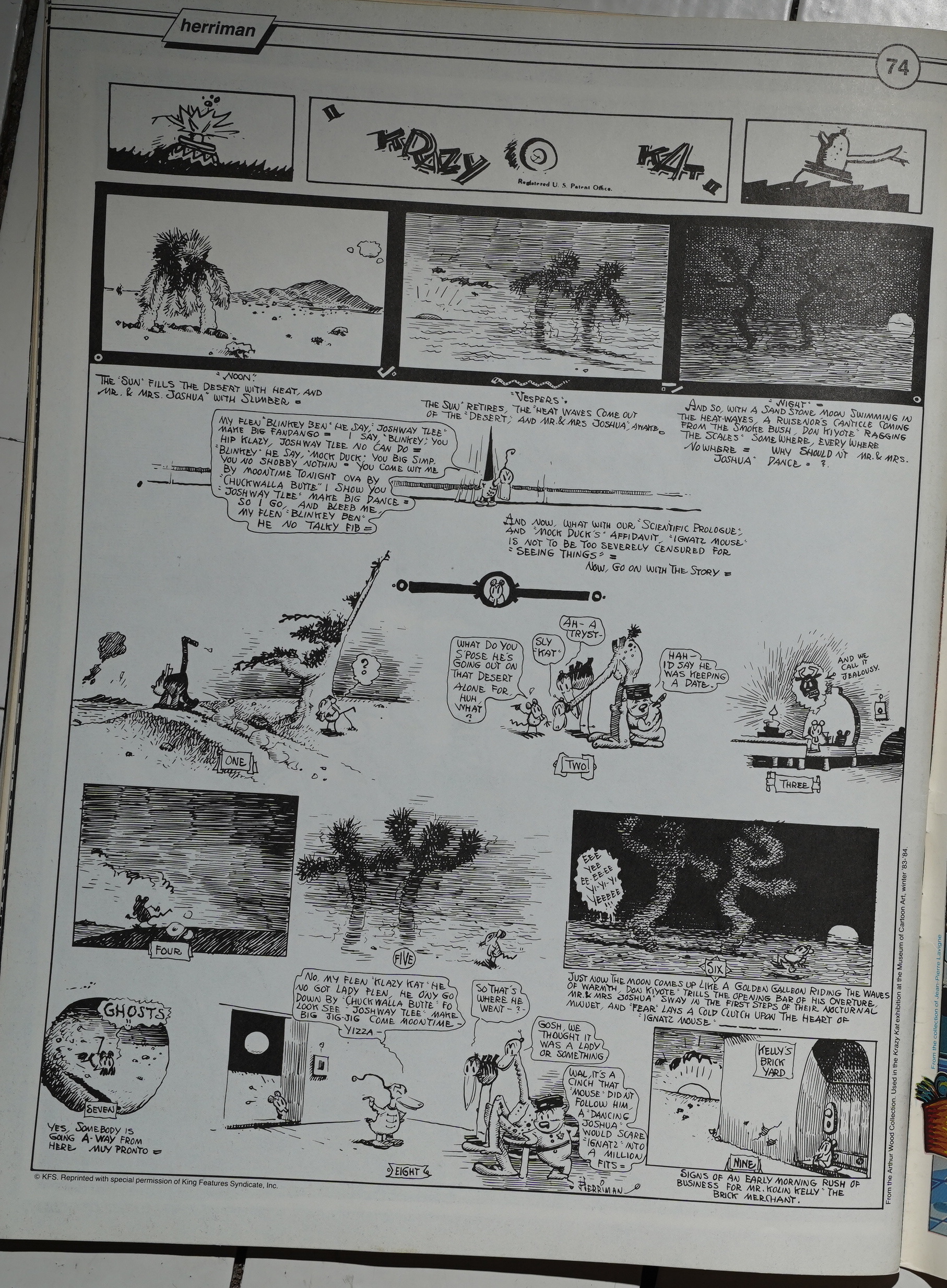 Reading this now, I’m amazed at how intense this issue is. It’s one sucker punch after another: It’s an emotional journey… so we get one Krazy Kat page to chill off with after the … ordeal.

This is just the most perfect issue of an anthology ever. There’s not a single piece in here that’s not an artist working at the peak of his (I don’t think there’s any women in this issue?) form, and everything seems to be in dialogue with everything else.

So, OK, I’m biased: I’ve read this book many, many times, and it was An Event in my life, and it help seed my love of New York and becoming a pretentious wise-ass, but… It’s kinda good, eh?