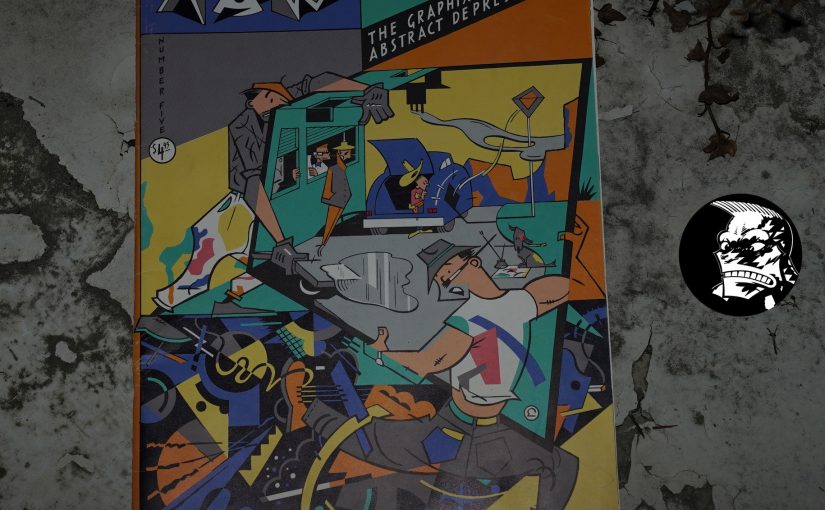 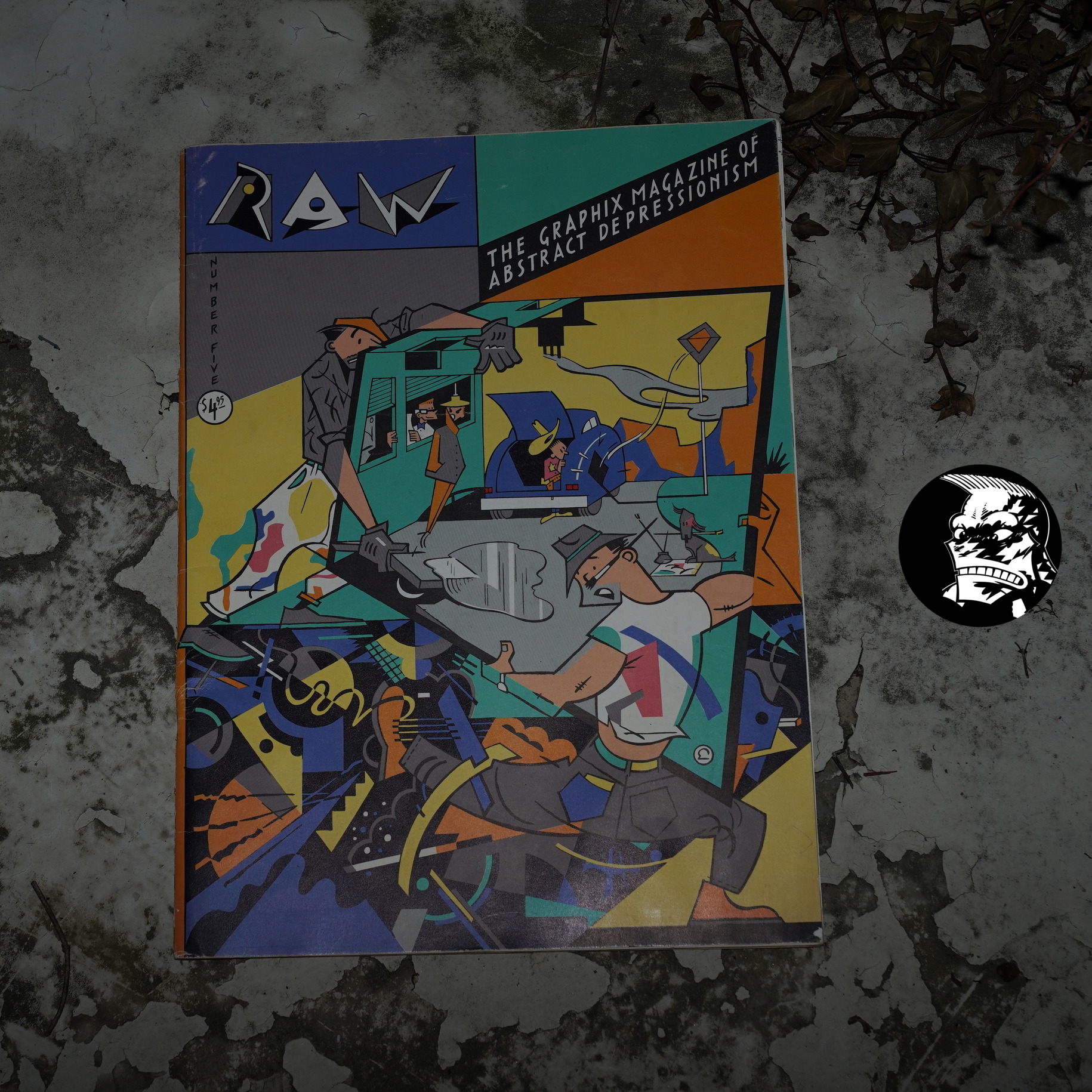 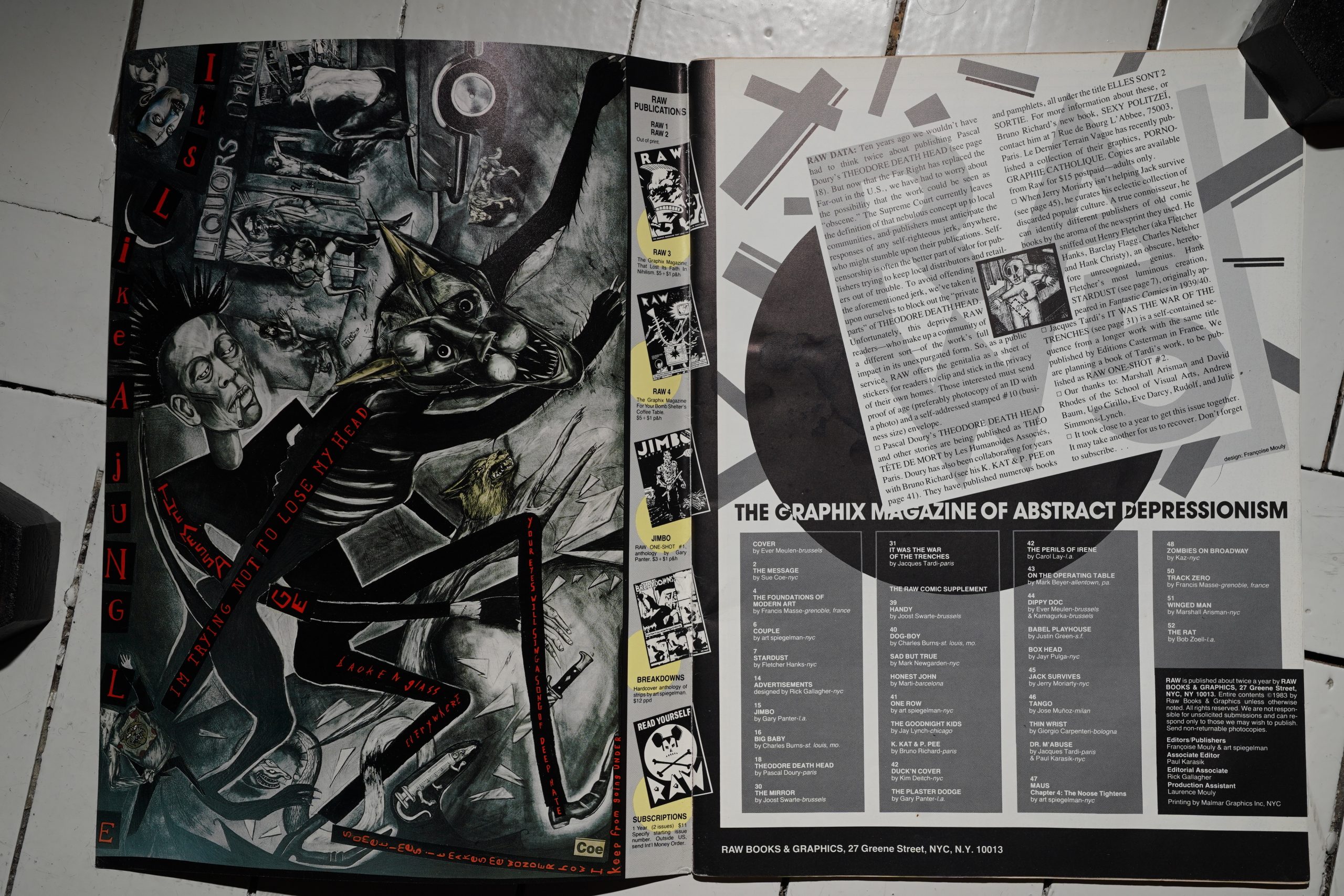 The Raw editorials started out pretty … er … abstract, but we’re solidly in chatty territory now. We’re told that the Pascal Doury piece in this issue has been censored — all the penises are replaced by white boxes, but don’t worry — you can write in an get them as stickers and stick them on yourself.

I remember reading this as a teenager and thinking that that had to be a joke? In any case, I did not send away for the stickers.

Also… look at the design of this spread. It’s so 1983! I love it! Sue Coe’s riff on The Message to the left; the inset covers of the stuff you can buy, and then all the overlay on the right hand page. Somebody has really spent time on this, and I guess it’s Mouly? 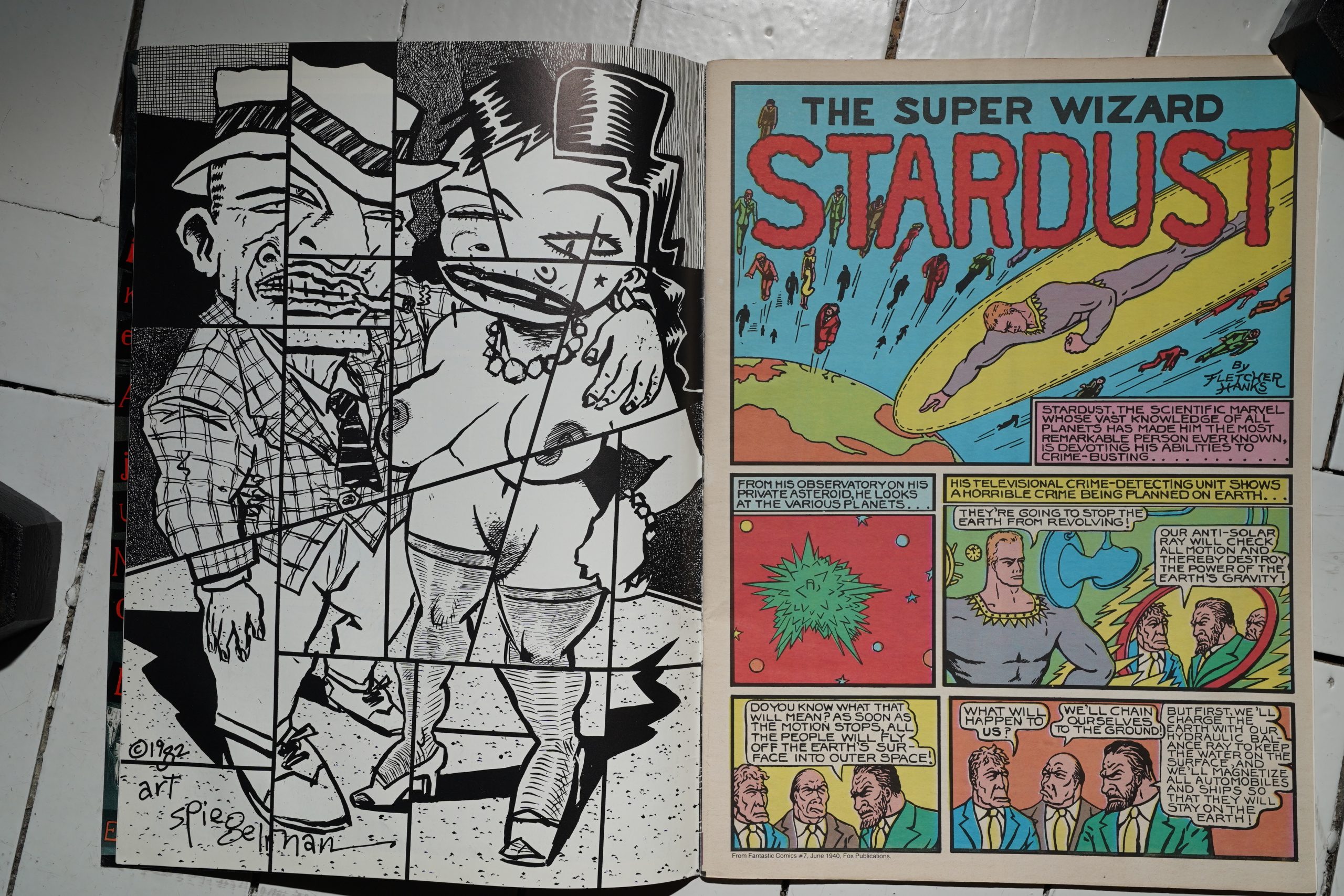 Fletcher Hanks is well-known now — all (?) his work was reprinted in two handsome volumes just the other decade. And I love the juxtaposition here with Spiegelman’s tough guy page: It’s incongruous, but there seems to be some communication going on here.

And the Hanks stuff is printed on a more newsprint-like paper, which also seems logical. 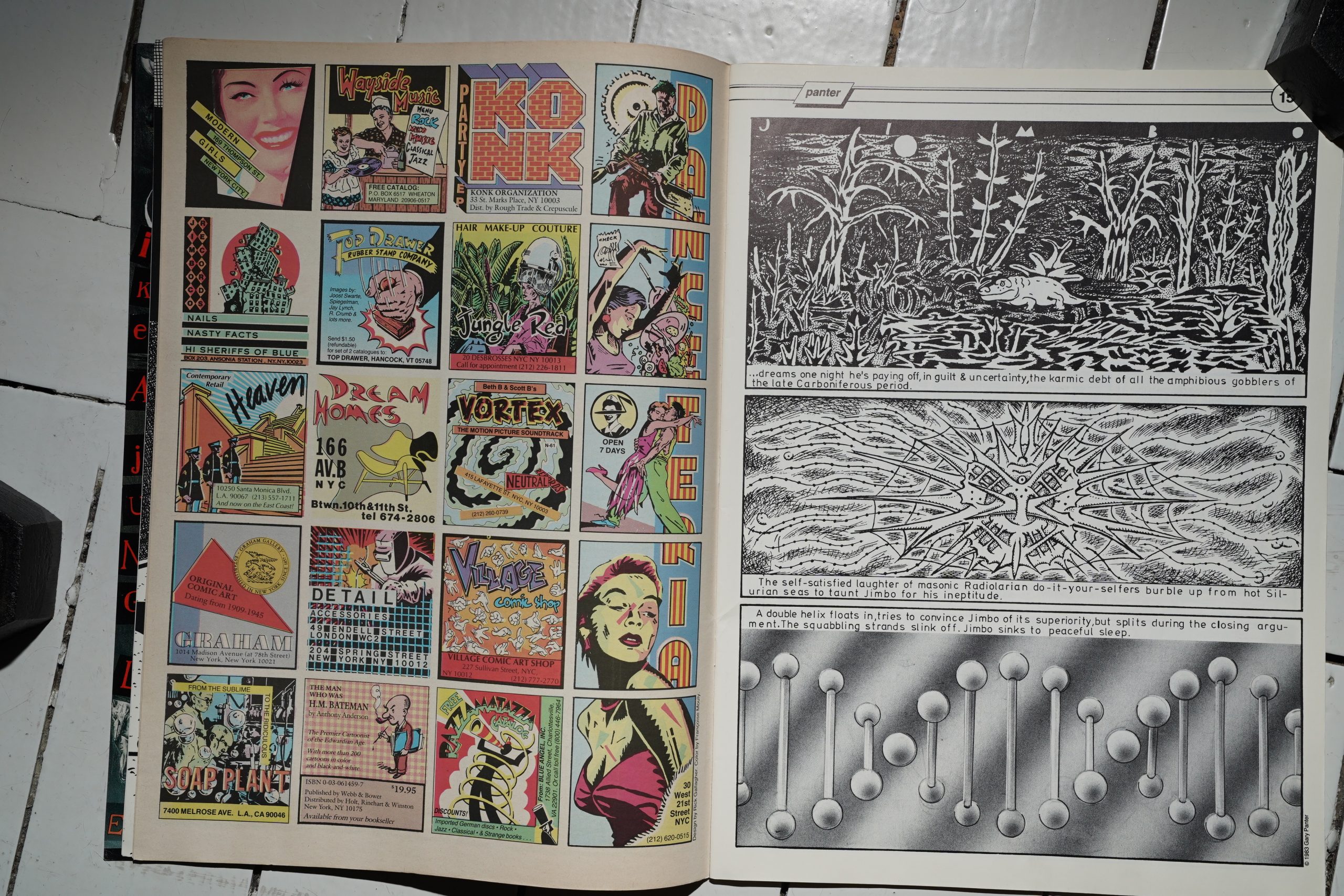 Wow, that’s a lot of ads… Hm… Danceteria again — they had ads in a lot of the stuff I’m covering in this blog series.

And a single page from Gary Panter. 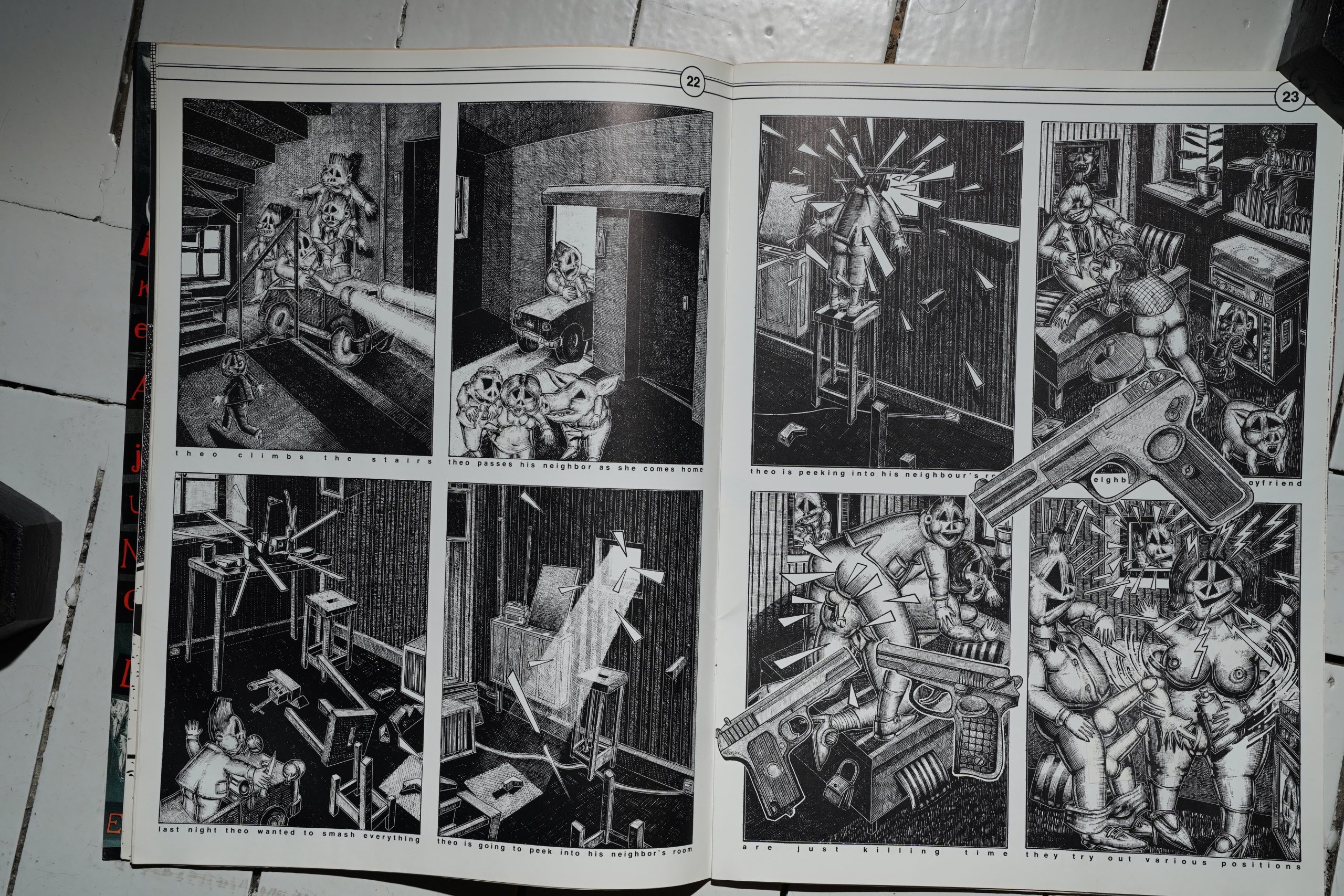 So here’s that infamous Doury thing. Oh, I remember those first panels there, with the guy driving his car up the steps. It’s a recurring dream of mine — driving around in houses in my little car. I love the sort-of detached text under the panels with the wild artwork… 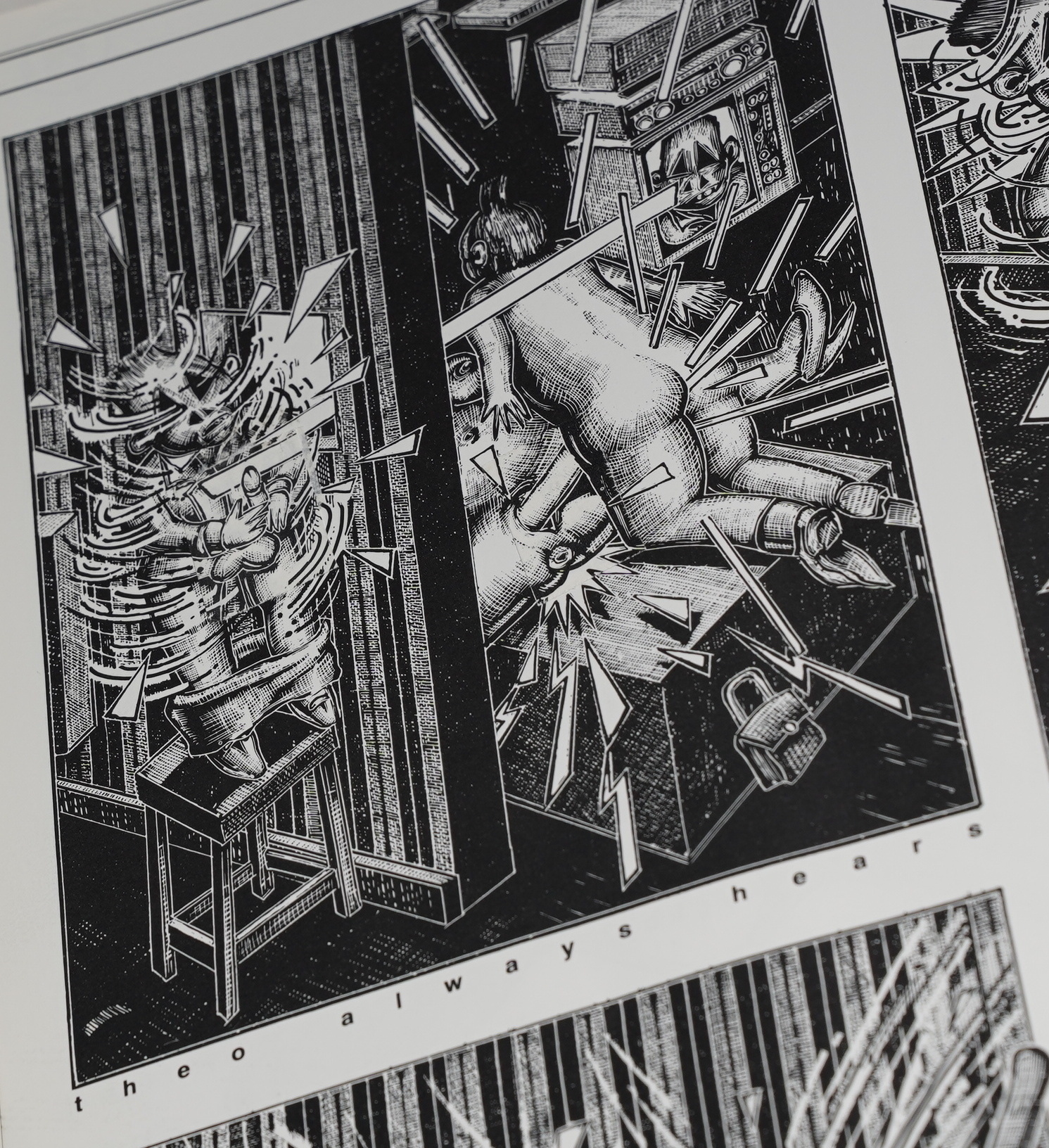 Oh, they’re stickered in? This copy belonged to somebody that sent away for the stickers and glued them in? 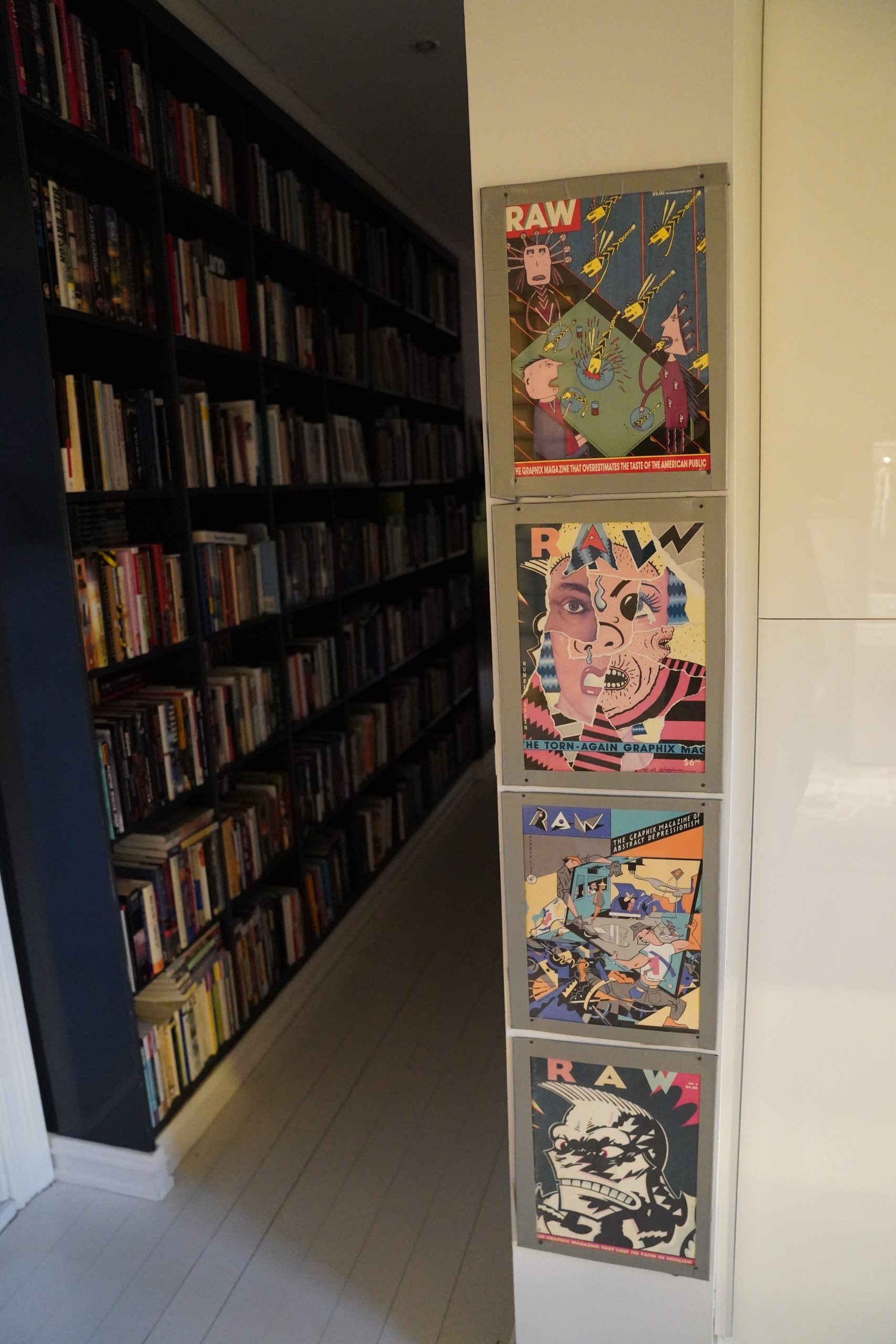 Oh, yeah, I forgot that the copy of this I had as a teenager now hangs in the hallway, along with three other Raw issues, and I didn’t feel like… “unframing”… them, so I got a new copy off of ebay.

Anyway, thank you very much to whoever got stickering. 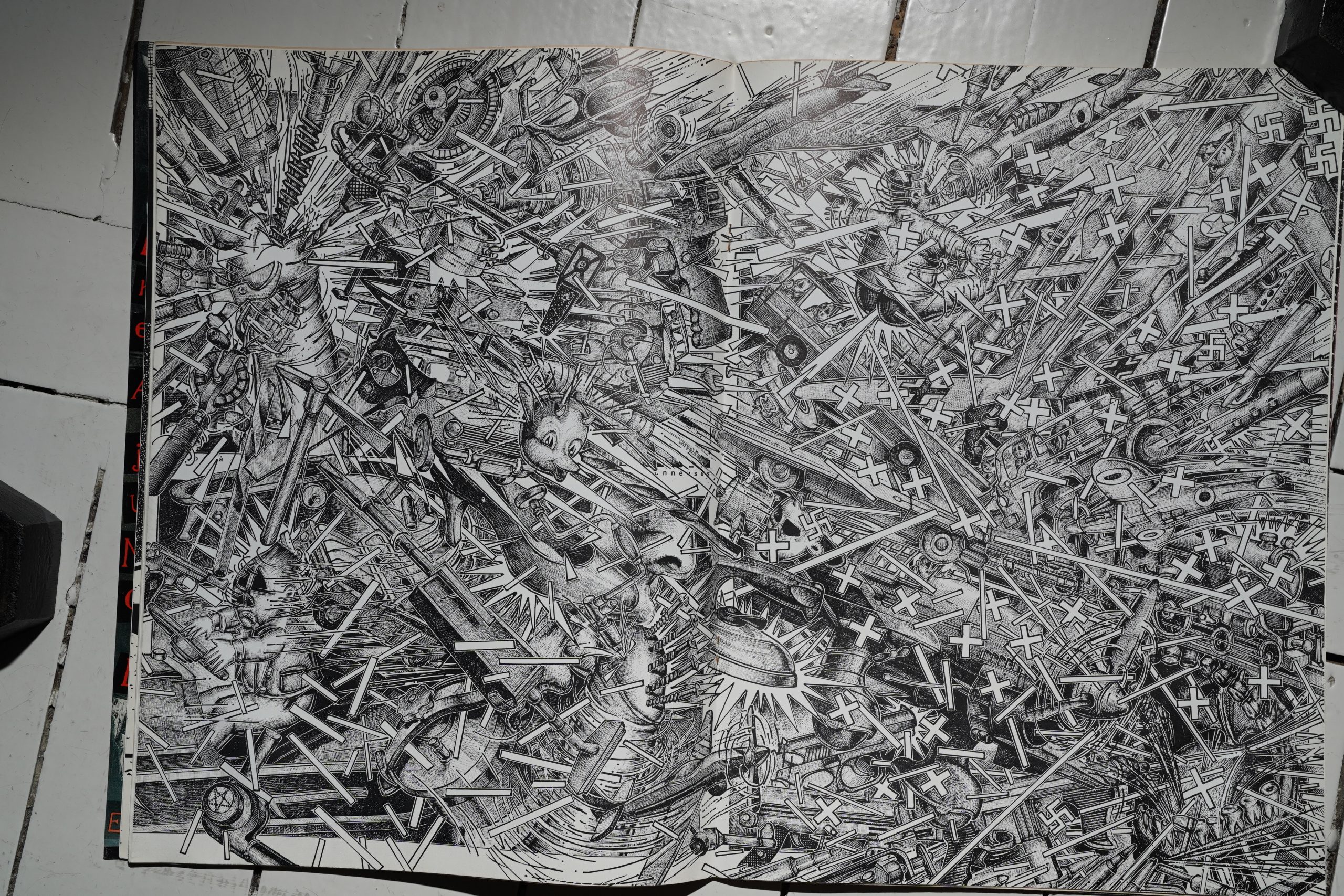 Anyway, the Doury piece is absolutely insane, with or without penises. Just look at this two page spread. LOOK AT IT! 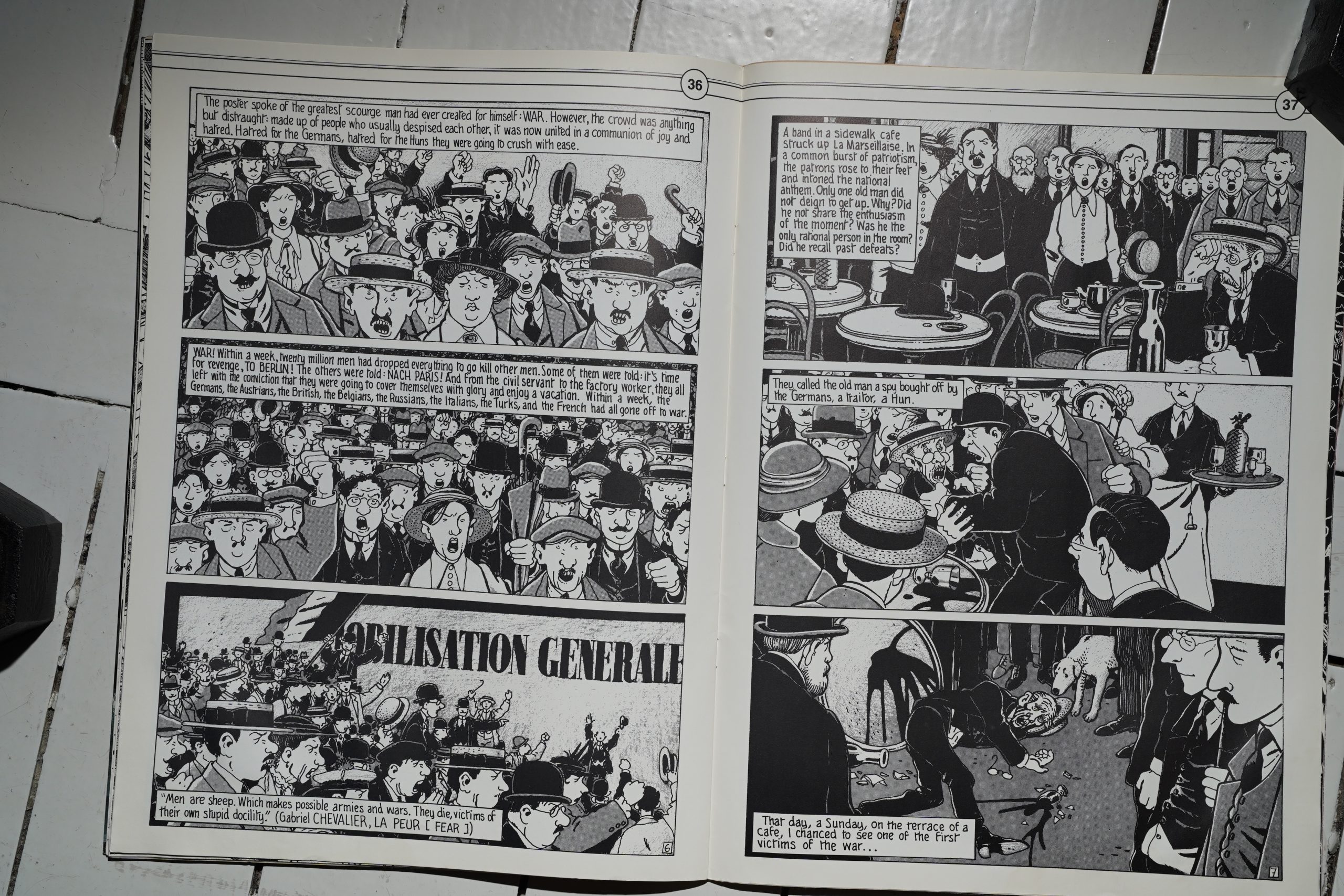 And then we get a Tardi piece; excellent as always. And the editorial said that they were planning to publish a longer Tardi story as Raw One-Shot #2, but that didn’t happen.

This was translated by Kim Thompson, who would (two decades later) publish half a dozen Tardi things via Fantagraphics.

But this is a slightly odd issue of Raw — it’s dominated by three longer pieces (Hanks/Doury/Tardi), and the remaining pages are bite-sized pieces from people who’ve already been in the magazine (one page from Sue Coe, two from Francis Matte, one from Gary Panter)… everything is fabulous, of course, but the issue seems lopsided somehow? 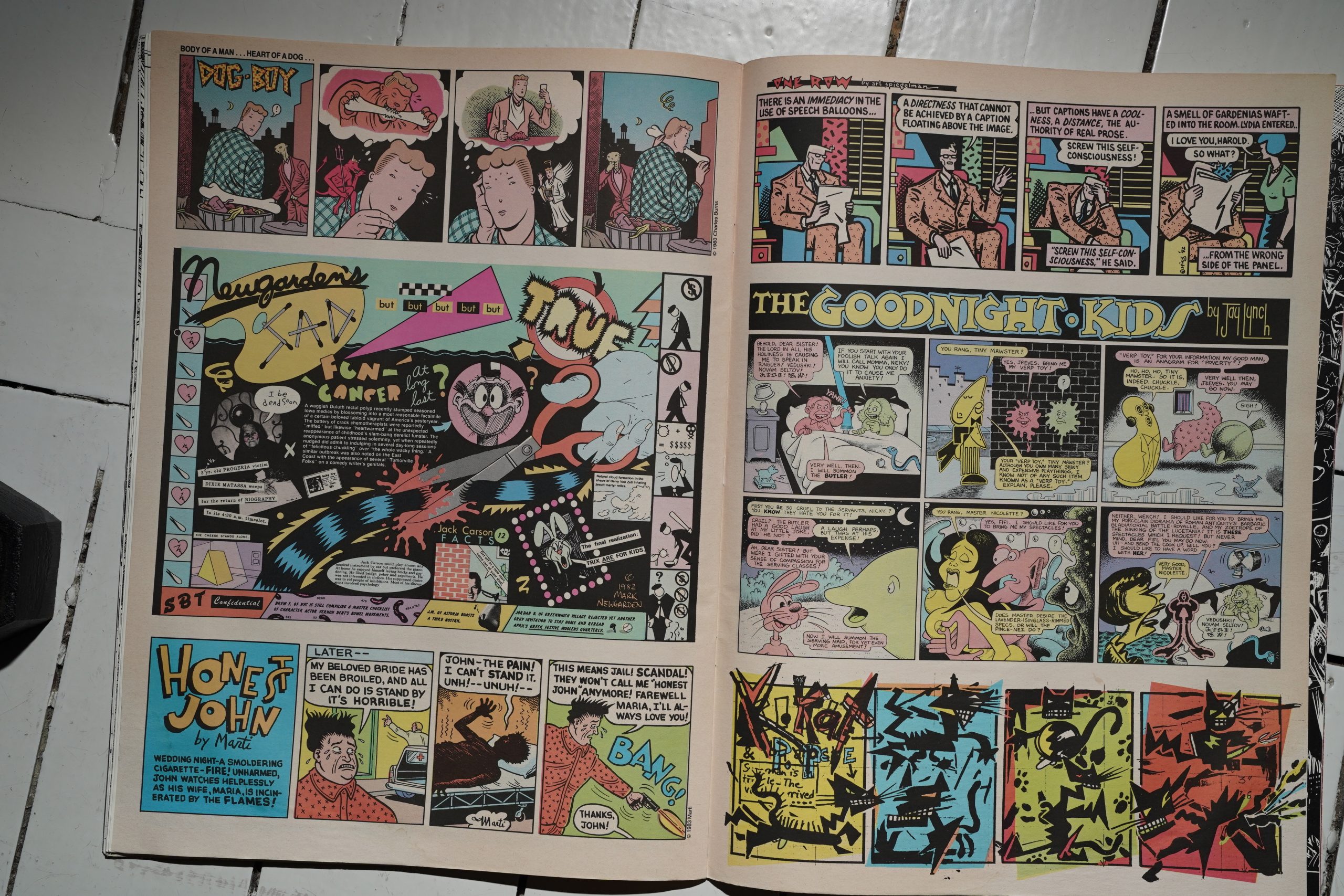 So then we get to The Raw Comics Supplement, which seems like a deliberate acknowledgement of the problems with the rest of the issue: Here we get a bunch of very short, wild, funky stuff, and with that, the issue flip back into “perfect” territory again. 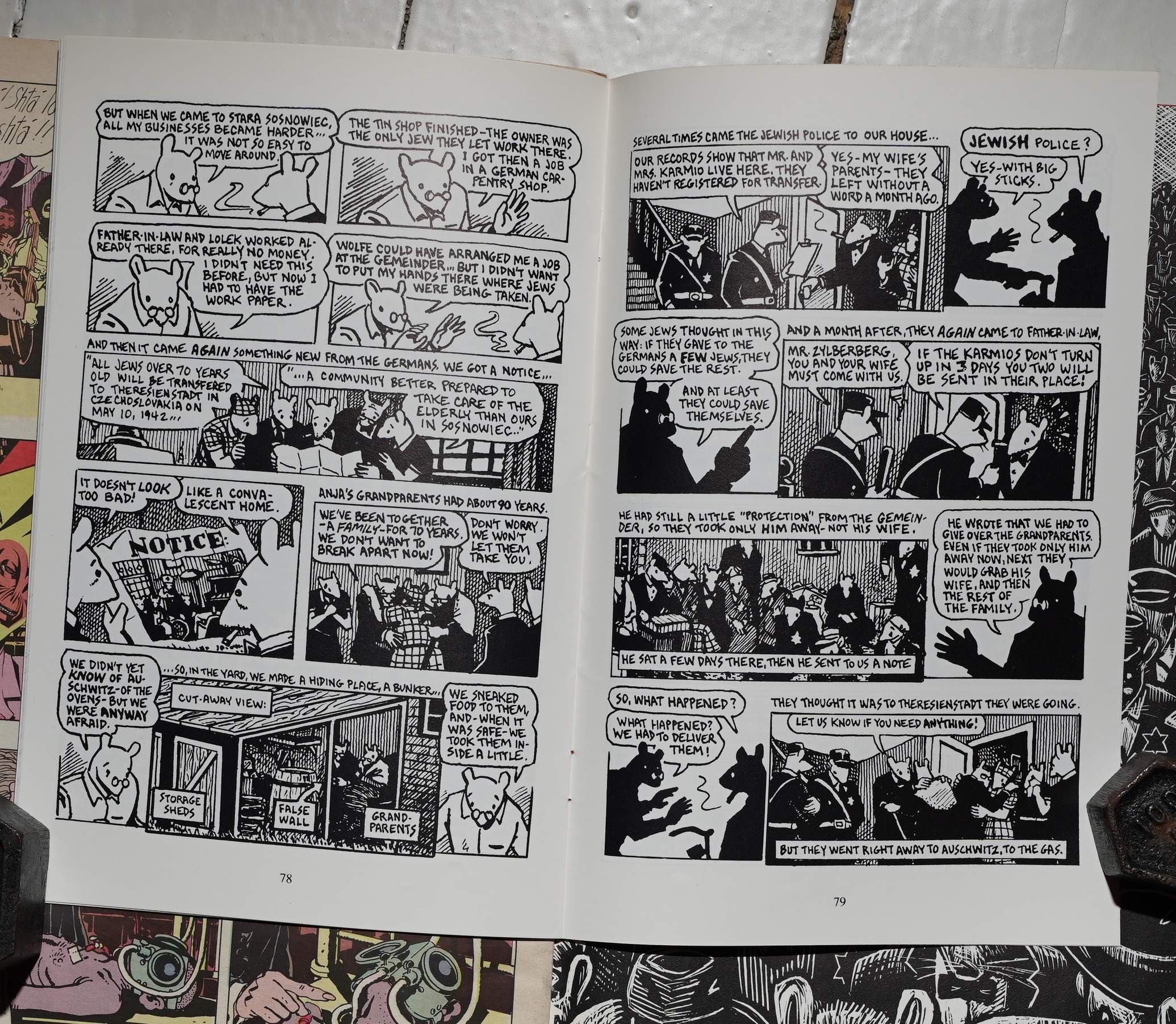 And the comics supplement makes the Maus insert even more harrowing… and this is the chapter where things really starts getting heartbreaking.

In Ad Reinhardt’s How to Look series (done
as a comics feature for the leftist New York
newspaper PM in 1946+7) there was a run-
ning gag about a man being stared down by
an abstract painting.
Man: Ha ha, What does this represent?
Painting to man: What do you represent?
One of the few generalizations I can make
about Raw is that reading it always makes
me feel like Reinhardt’s man. Whatever my
initial reaction to a given piece in
Raw—and they range from love at first
sight to “Something is happening here, but
I don’t know what it is,” to “What in God’s
name did Francoise and Art ever see in this
find myselfreturning to each issue
until some sort of articulate response to its
contents begins to emerge and continuing
to return as the process of articulation,
once begun, deepens and unfolds. In an age
of throwaway art, instantaneous eyeball
kicks and trumped-up emotion, Raw (like
the austere non-objective paintings
Reinhardt created when he climbed down
from his comic-strip soapbox) invites con-
templation, continued study, and—What
do you
A second generalization, prompted
largely by the issue under review, is that
the work of artists who appear regularly in
Raw must be judged by its cumulative ef-
fect, not piecemeal. I can hardly imagine,
for example, how a reader coming to Raw
5 without exposure to earlier issues would
react to ghe two short contributions by
Francis Masse. My own response would
probably have been, “Here is a Don Mar.
tin for grownups who knows how to draw.
When will he get around to -offering us
something more substantial?,” had not
Raw 4 already given me Masse’s 12-page”A
Race of Racers,” a blend of Qallic whimsy,
allegorical social satire, and visual poetry
(including the most beautiful •and accom-
plished work I have ever seen).
After this massive helping of haute cuisine,
Masse’s Raw 5 offerings went down like a
baba au rhum served with
coffee. My advice to anyone who liked the
dessert is to go back and try the main
course.
The same observation applies more
forcefully to Charles Burns’s “Big Baby”
and to Gary Panter’s “Jimbo” page. I first
encountered Burns and Panter in Raw 3,
and my initial reaction to their work was
strongly negative. Burns, in particular, irri-
tated me out of countenance: his one-pager
broadening the readers perspective.
about a woman reading an SF comic in bed
And I Pressed My Hand Against His
Face.’ struck me at first reading as
Strenuous attempt to raise comics to the
level of “real” art. while keeping at a safe
distance from it. Burns’s graphic style, a
compoundÅa’ it then seemed to mu of riffs
lifted from Ai Fel&tein, R.H. Webb, and
H.G. Peter, confirmed this impression:
• I’Let the little bastard do something as
good as ‘Seeds of Jupiter! or Frankenstein
(Classic Comics version) or a vintage
Wonder vgman story before he bresunies
€0’ condescerid to his betters,” I snarled
vGnwafdly. Well, he has. The two feature-
length stories by Burns I have since read
‘C’The Voice of Walking Flesh” in •Raw 4
and “Robot Love” in the •January 1983
Heavy Metal) reveal him as an artist of great
.originålity and authentic, if mannered,
narrative and graphic power, and as the
firs! American comics artist since Kim
Deitch to use science fiction effectively as a
vehicle for social and political satire.

Like previous
issues, Raw 5 intersperses comics pieces
done in a wide variety of styles and formats
with full-page reproductions- of drawings,
paintings, prints, and (this time around) a
page of real ads laid out like a grid of comics
panels. The point is neither to show that
comics are up there with painting and
graphic art (or, as in previous issues, with
illustrated text pieces) nor to show that
visual and literary formsalready acknowl-
edged as serious art are down there with
comics, but to create an artistic continuum
which includes comics as ,one of the arts
and which promotes fresh, raw ways of
looking, reading, hearing, feeling. If works
of art can look at us—What do you repre-
can look at one another as
well, and the choice and arrangement Of
material in Raw 5 (subtitle: i’ The Giaphix
Magazine of •Abstract Depressionism”)
maximizes the amount of looking done by
all parties concerned. This editorial
strategy can be playful or menacing or both
at the same time. Even after repeated view.
ing, some Of the juxtapositions in Raw 5
still make me feel like a live target in
visual shooting gallery.