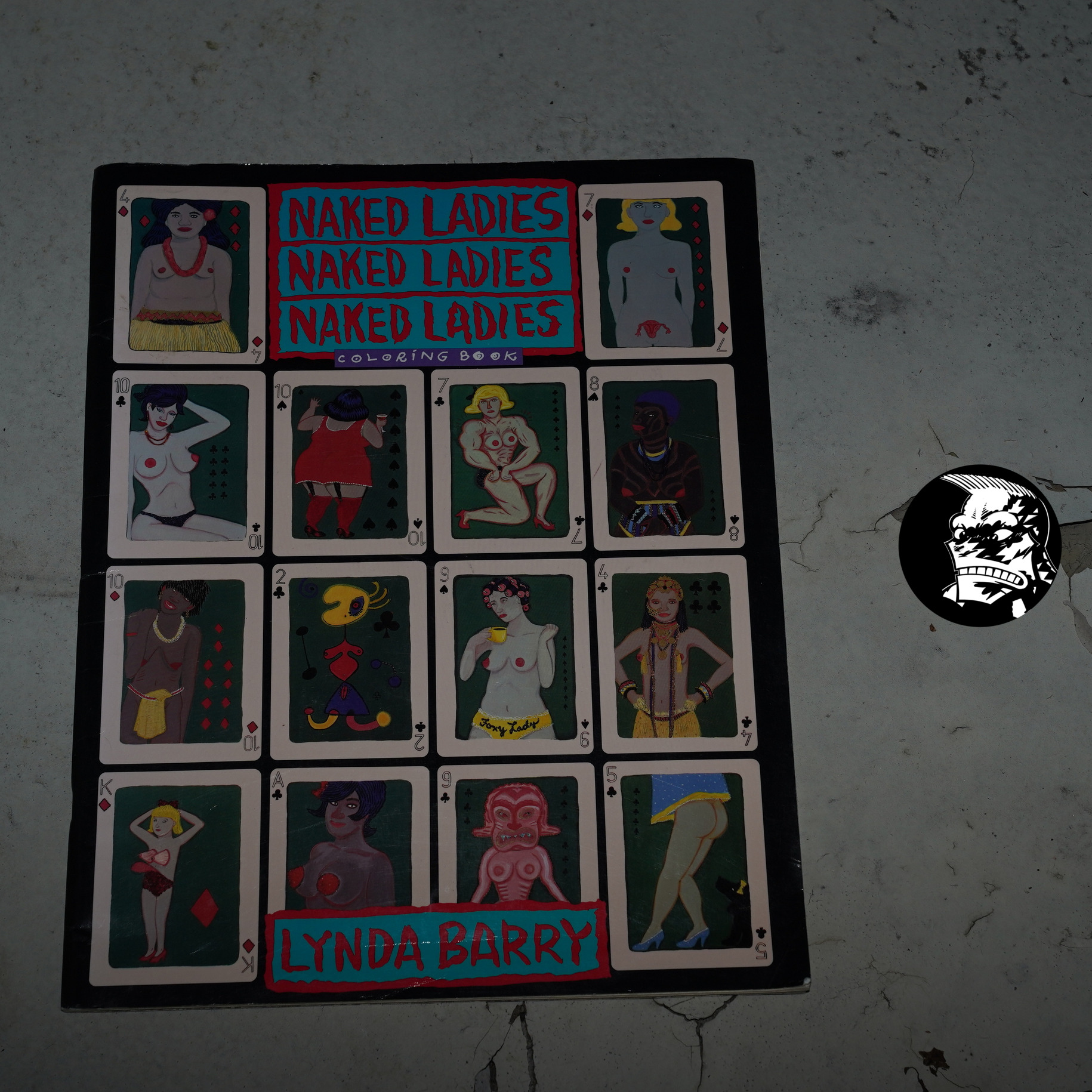 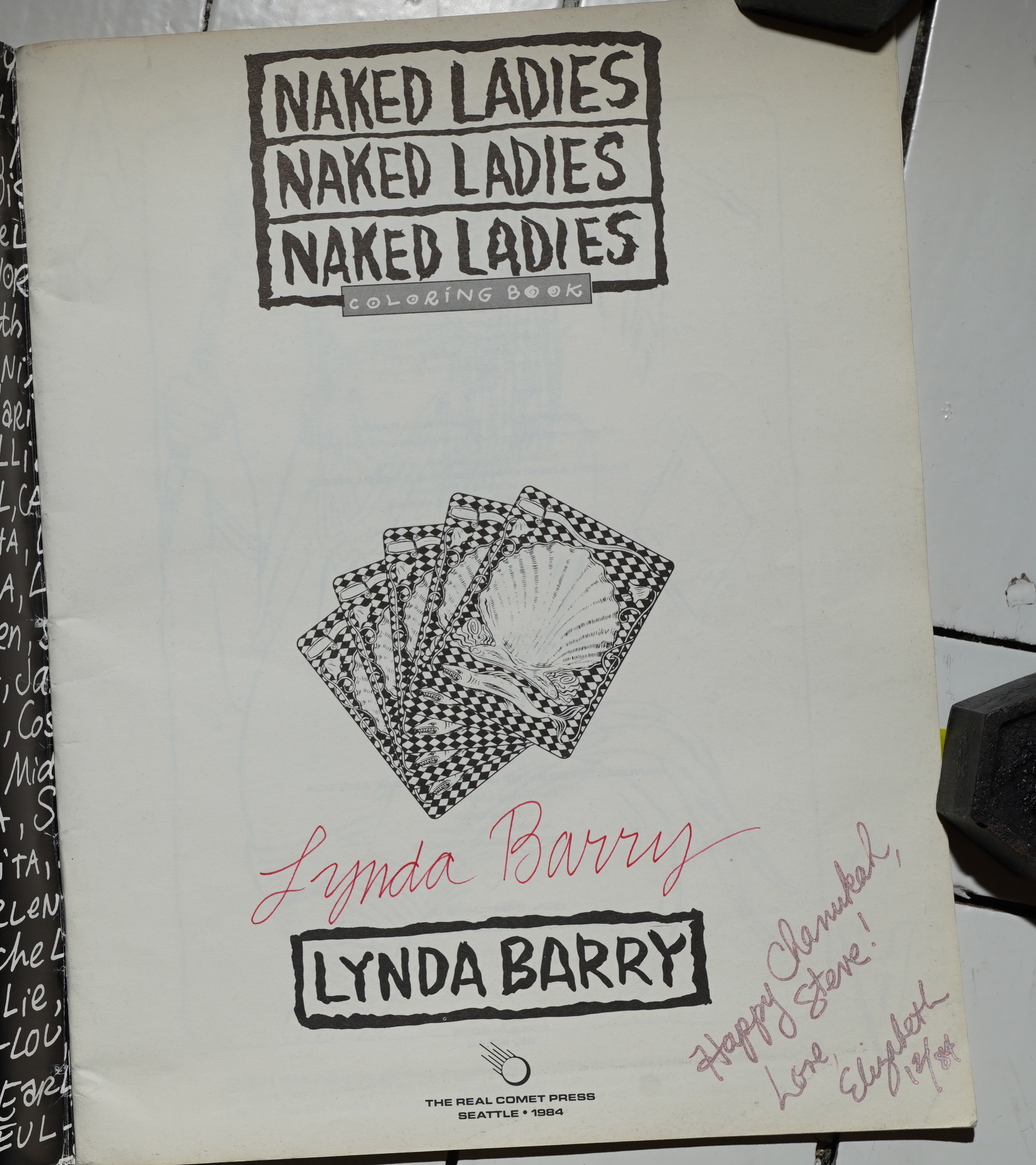 I hope Steve liked the book.

Is that an official designation? 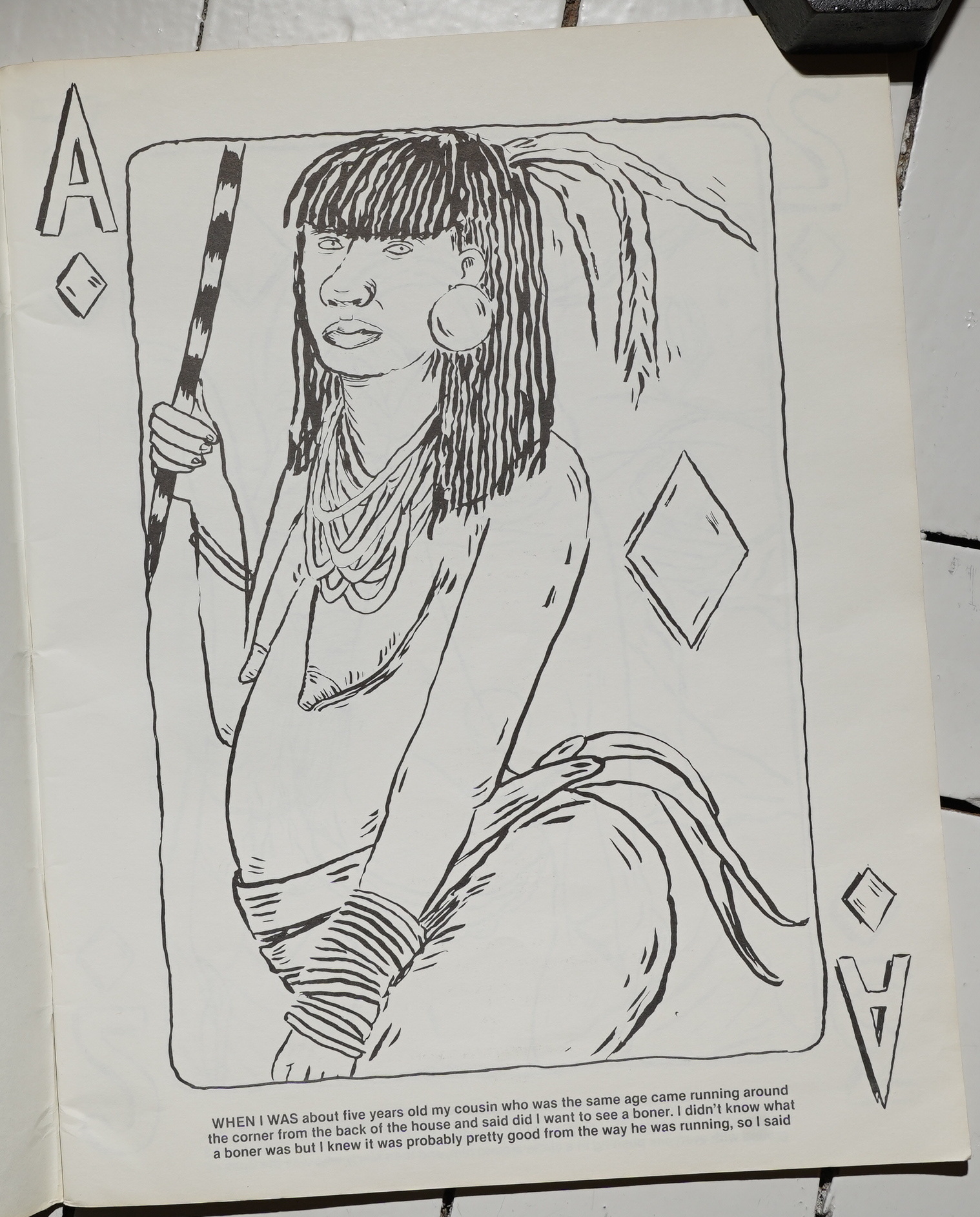 Anyway, I don’t think the “coloring book” thing is meant to be taken seriously, but this is a huge black-and-white book with drawings of naked ladies and Barry writing about her childhood and her relationship with naked ladies (in Playboy, for instance). 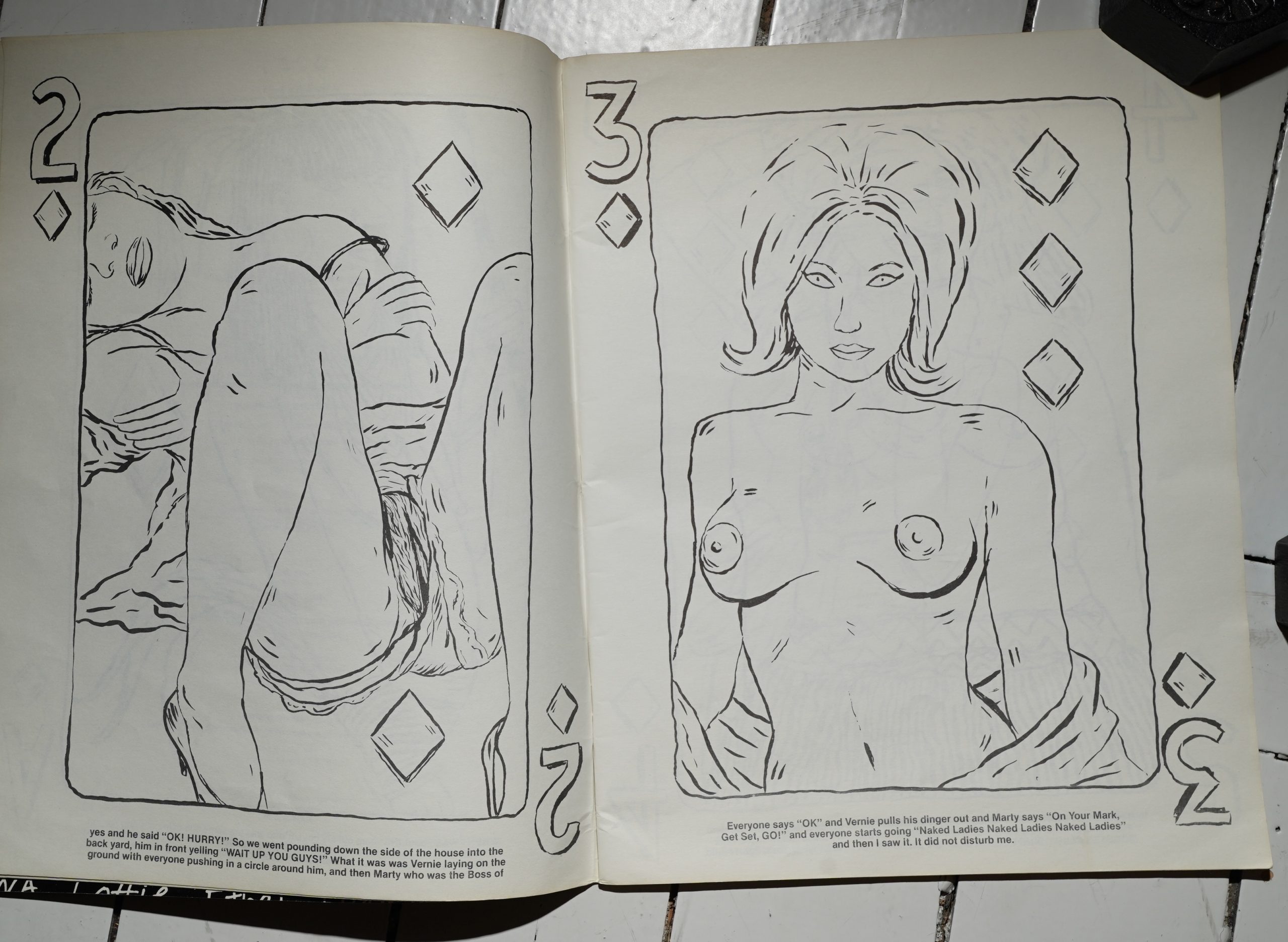 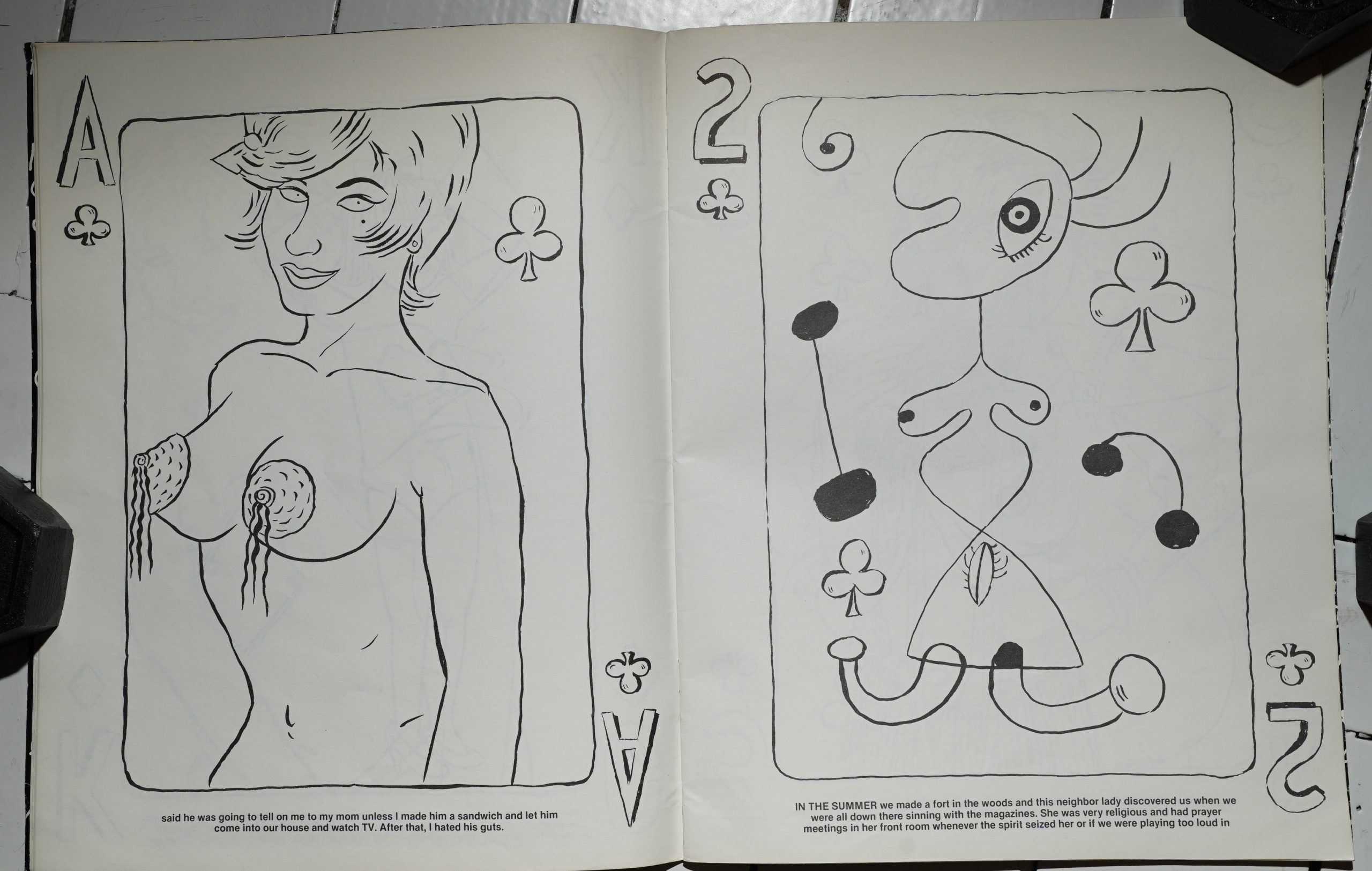 Some of these naked ladies are more abstract than others. 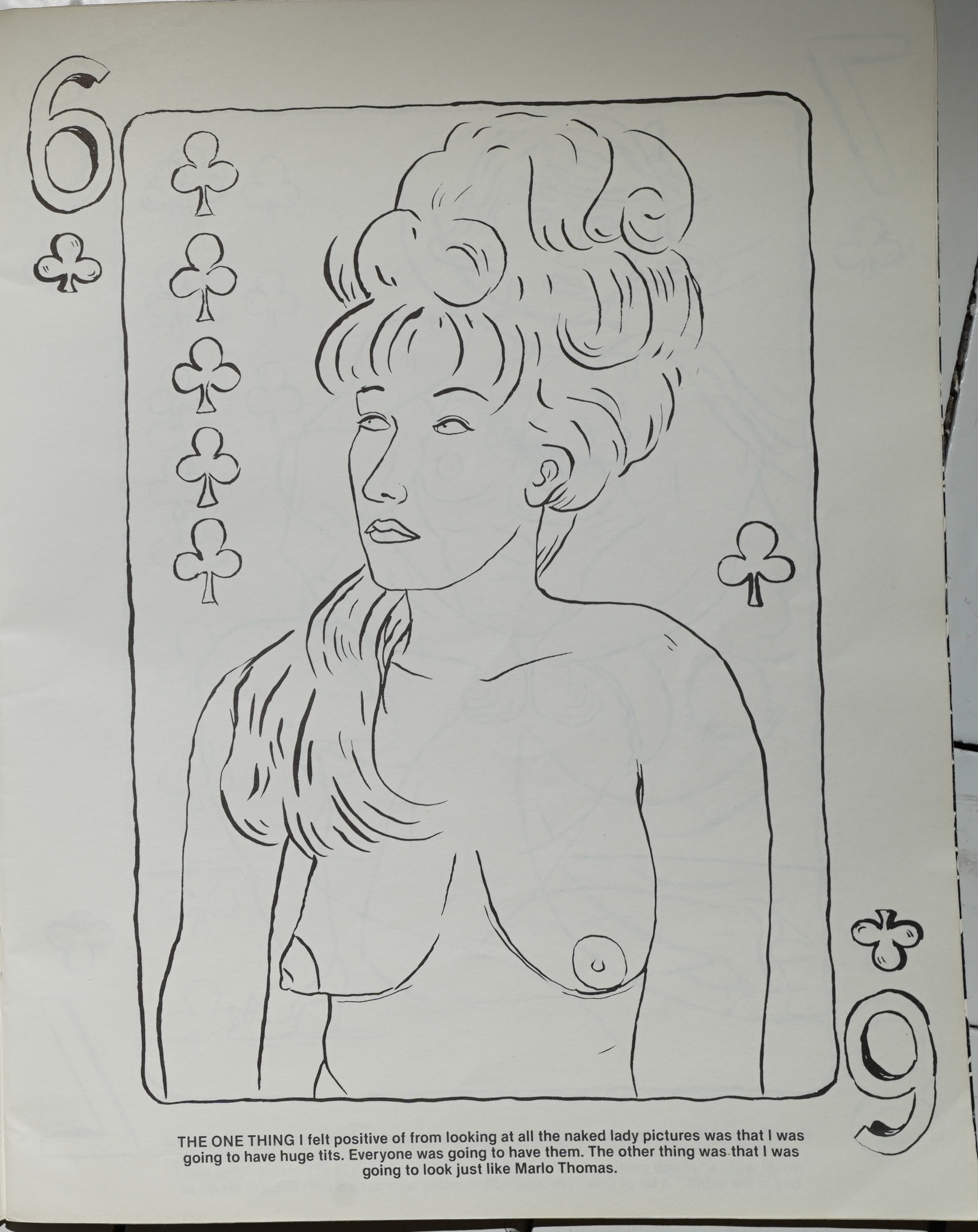 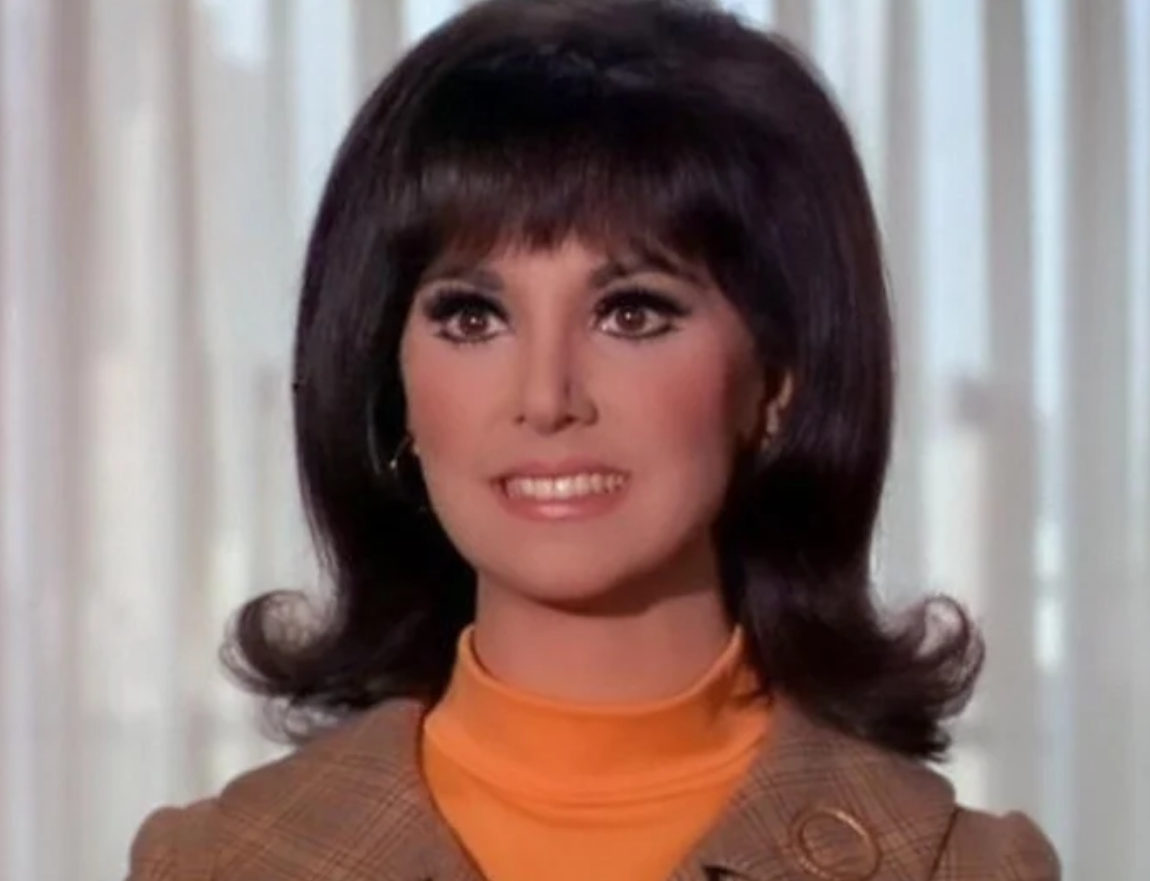 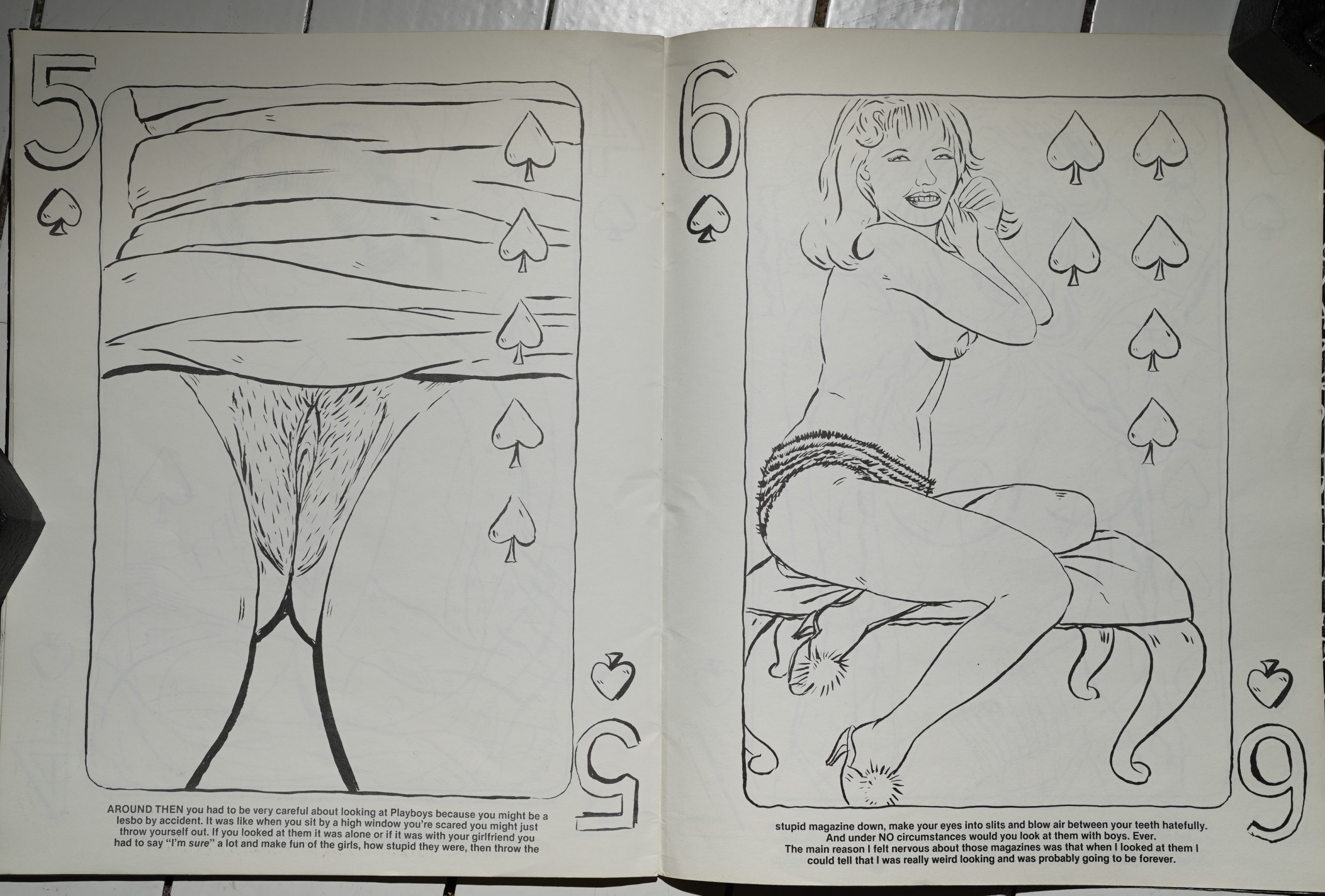 I wonder what the impetus for this book was — whether she had planned on drawing these 56 women as an exercise, and then morphed the artwork into these playing cards and added the text, or whether it was all planned this way from the start. Because the thing is — it really works. The apparent incongruity makes this a thrilling reading experience. 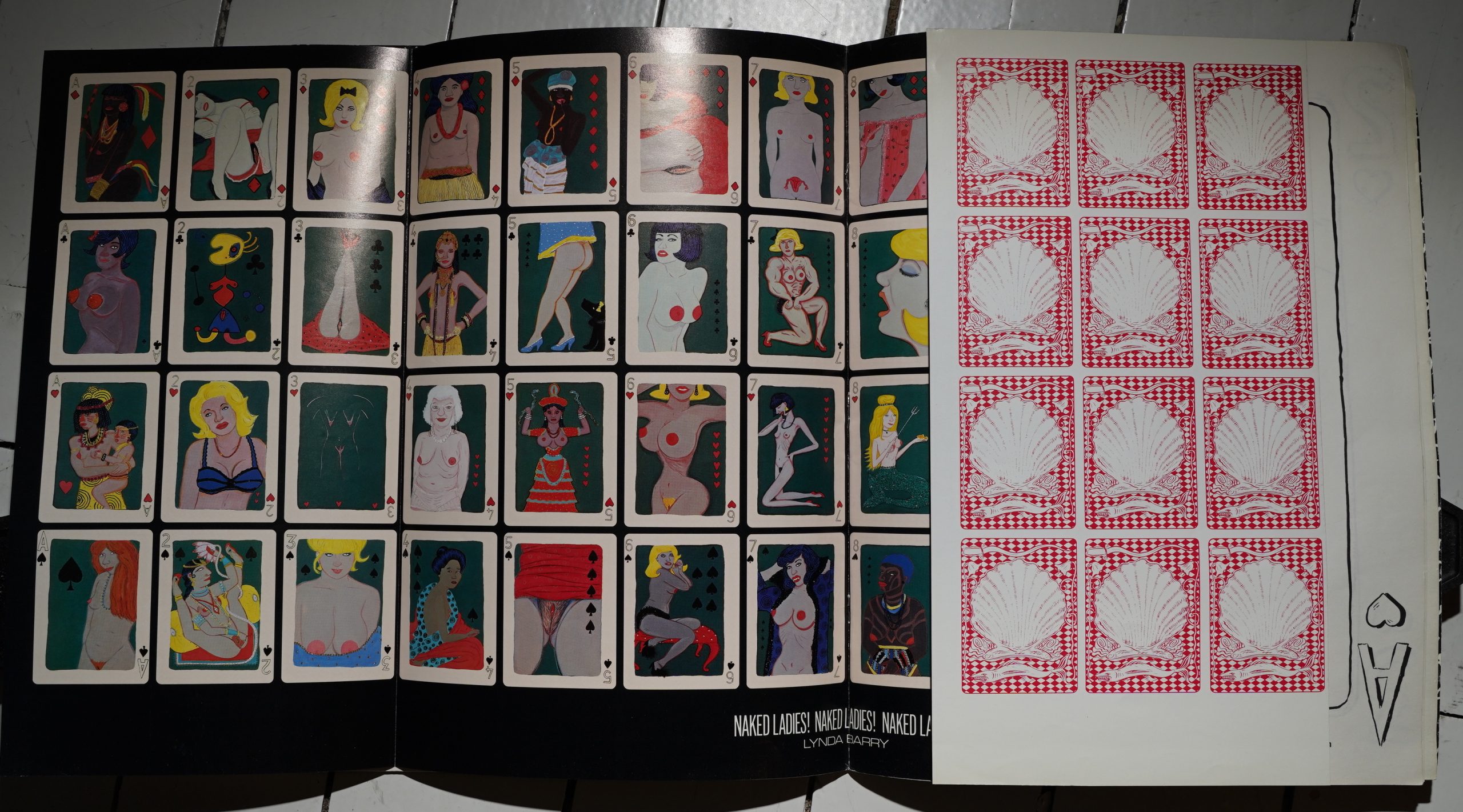 And Barry has coloured the ladies for us, and you can cut out the centrefold and make your own playing cards.

Barry is interviewed in The Comics Journal #132, page 67:

POWERS: And 1 read that —
BARRY: Kiss me! 1 dare ya’!
POWERS: — when the Naked Ladies exhibition open-
ed, there nus some sort of controversy..
BARRY: There was no controversy! I swear on a stack
— I will lay on Bibles buck naked and swear before God
that there was no controversy. But people expected there
to be, so people just made it up. You want to know how
little controversy there was? Naked Ladies got a positive
review in Ms. and Screw. I thought there would be a con-
troversy; I didn’t know who was going to get me, the real
conservative people Or the separatist lesbians. But nobody
said a word. I was sort of sad, myself. In interviews they
always say, “I’ve heard it was quite controversial.” The
only people who gave me trouble was the artist-run
bmkstore — the hip, artist-run bookstore in .%attle refused
to carry it because they said it was sexist.
POWERS: I think it Hus in a Boston Globe article that
that wus When you had your division With the fine arts
community.
BARRY: Yeah. One of the things I noticed whenever I
went to a bookstore was I was looking more and more
at graphics, photography, and comics, and less and less
at the fine arts section. In fact, when I looked at any kind
of books of new art, modern art, my contemporaries, I
had no idea of what they were do’ . I
like the
ernlxror’s new clothes. It still is: I don’
doing. I feel kind of bad about it. So I guess I just turned
into a cartoonist by accident. I was furious at the fine arts
community and at the artists who run that bookstore for
saying that the work was sexist. I mean, Jesus God! Read
it! They were the only people who gave me trouble —
the hippest people in the town.
POWERS: How did that project come about?
BARRY: I bought this deck of those nudie playing cards
for my little brother, and it said “52 different girls,” and
my brother looked at it and said, “Is it 52 different girls,
or is it five girls with 52 wigs?” There was something
about that statement that let me know that it could be five
girls with 52 wigs: the body types are always the same.
I thought it would be fun to do a deck of cards — because
I love naked women — with every type of body. It would
be fun to just draw it; that’s what I thought. I have this
buddy, Keister, one of the guys who got me printed; I
thought it would be fun to do for him. It was originally
a project to make one of my friends happy. It turned into
this thing — it turned into a show; it turned into some
paintings; it turned into this coloring book. And then I
wrote this narrative that went with it.
POWERS: Whs the narrative you speaking?
BARRY: No. It’s a character. It’s not autobiographical.
There are some things: the opening sequence about the
first time I ever saw a boner, that’s true. A lot Of it’s just
made up. Old fiction.
POWERS: The character Ann talks about how she likes
naked ladies…
BARRY: I think that if you talk to any girl, you’ll hear
that. It’s universal. Any kid does, because it’s the
mysterious and it’s the hidden. It’s actually hidden, like
hidden somewhere in the house. A girl I met yesterday
told me that her dad hid the “naked lady” books with
the cookbooks for some reason, thinking that the kids
would never look through the which of course
they beeline to immediately as soon as they found out.
In the narrative, Ann makes a distinction between when
she looks at it as a kid and when later on she’ll never look
at it. She can’t look at it with boys When she becomes
an adolescent; it’s embarrassing for her. So that’s what
that’s about.

Lyrida Barry prosecutes her side of the
sexual wars with a razor wit and a sly in-
telligence that can only be compared with
middle-period Rolling Stones, but with
reserves Of compassion and empathy that
they couldn’t dream of. Naked Ladies is
parc parody of the pornography of Barry’s
childhood (including the National Geo-
graphic), part examination of what the
pamphleteers used to call women’s body
image, and mostly a celebration Of in-
dividuality. The best part is the memoir
that runs under the pictures, in the manner
of some coloring books: Our Home Ec
teacher wou7d terrify us with information
like how the dentist could tell when you
were on your period, and by taking Our
bust measurements and writing ‘it down.
She told us she was exactly like we were
when she was our age and that made some
of us feel sort of like crying.”