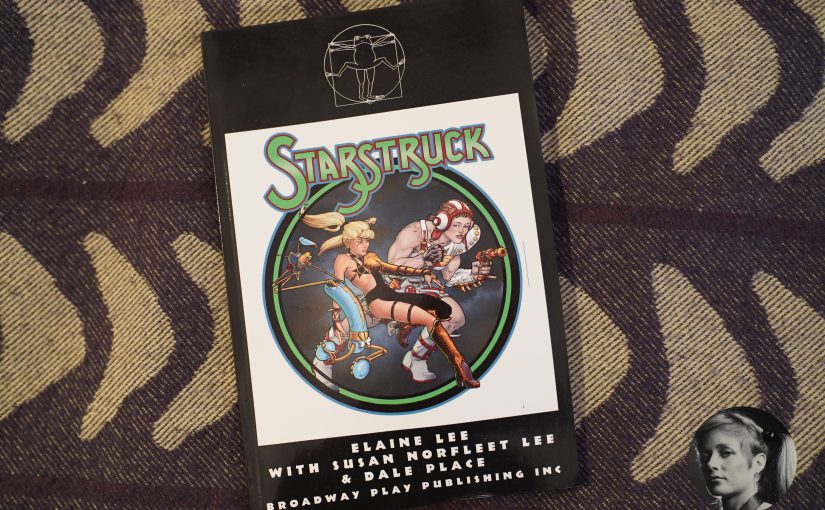 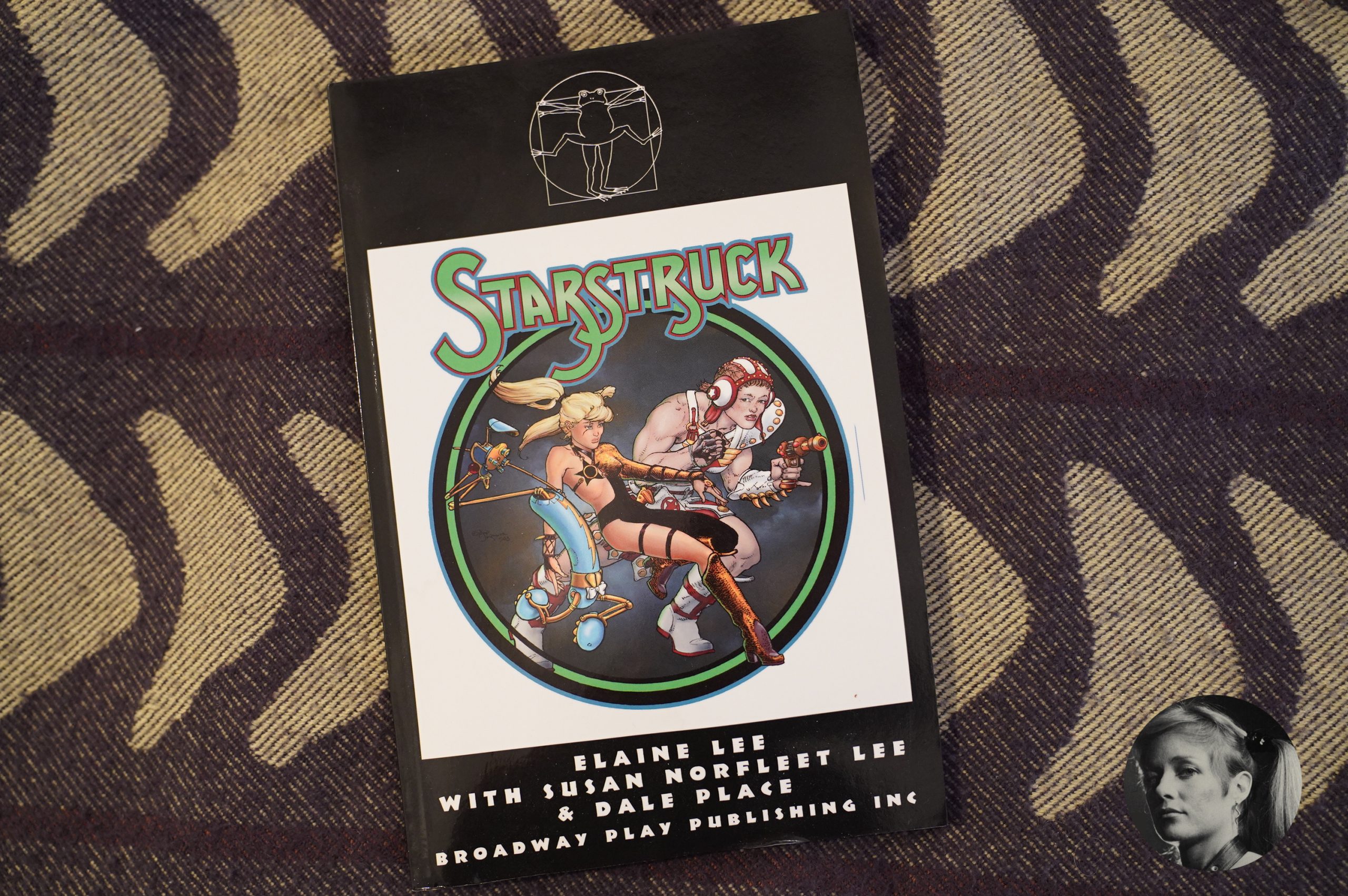 Time flies like a banana. The previous post in this blog series was half a year ago, but I kinda forgot to write the final post, since I got sidetracked there for a bit… (Oh, Here’s an explanation of what this blog series is.)

But we finish this series with Elaine Lee’s first thing: Her script for the Starstruck stage play, which was the basis for the absolutely magnificent Starstruck comic book. 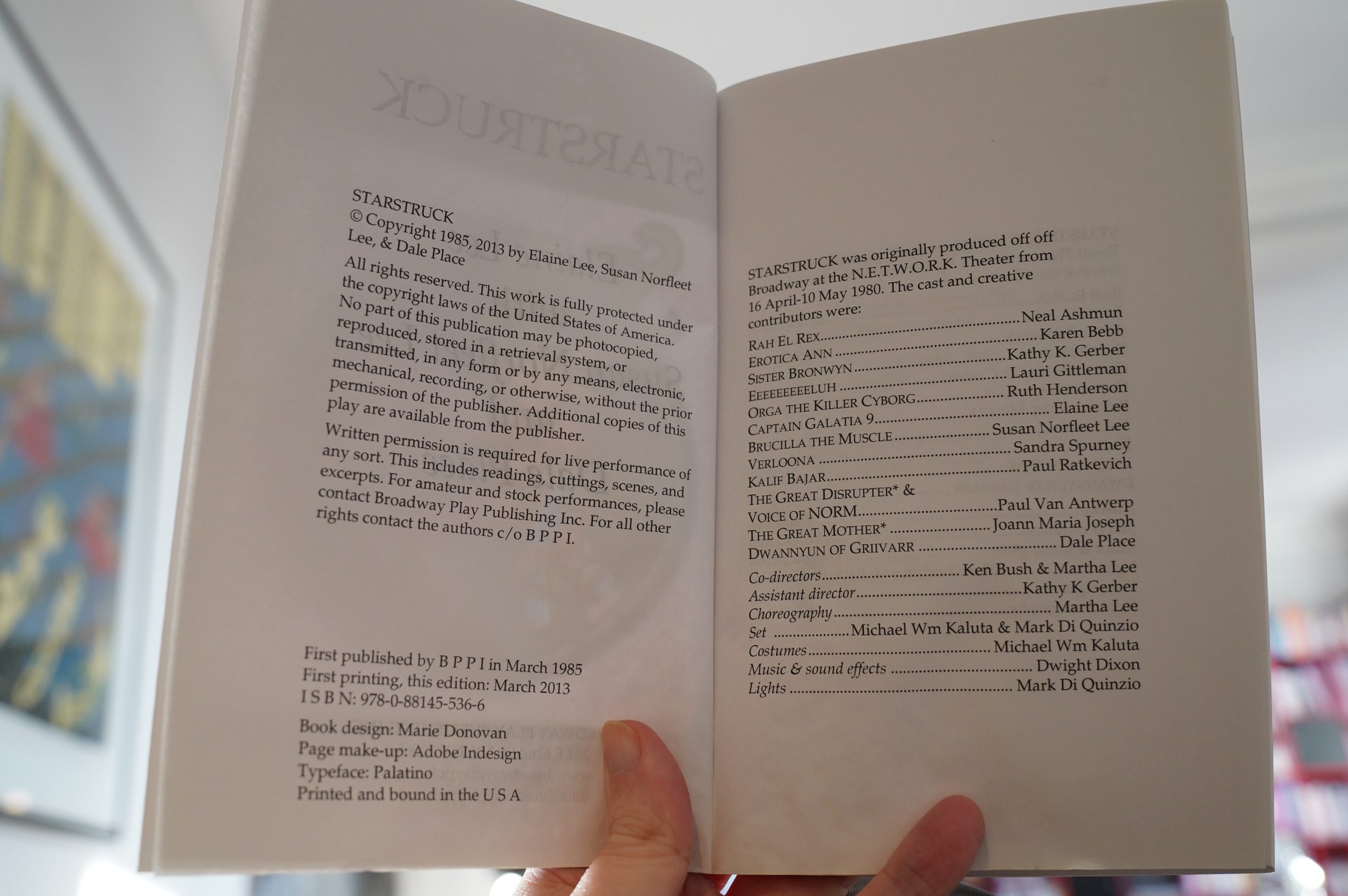 I love that there’s a character called Eeeeeeeeeluh. (I think I got the number of “e”s right…) 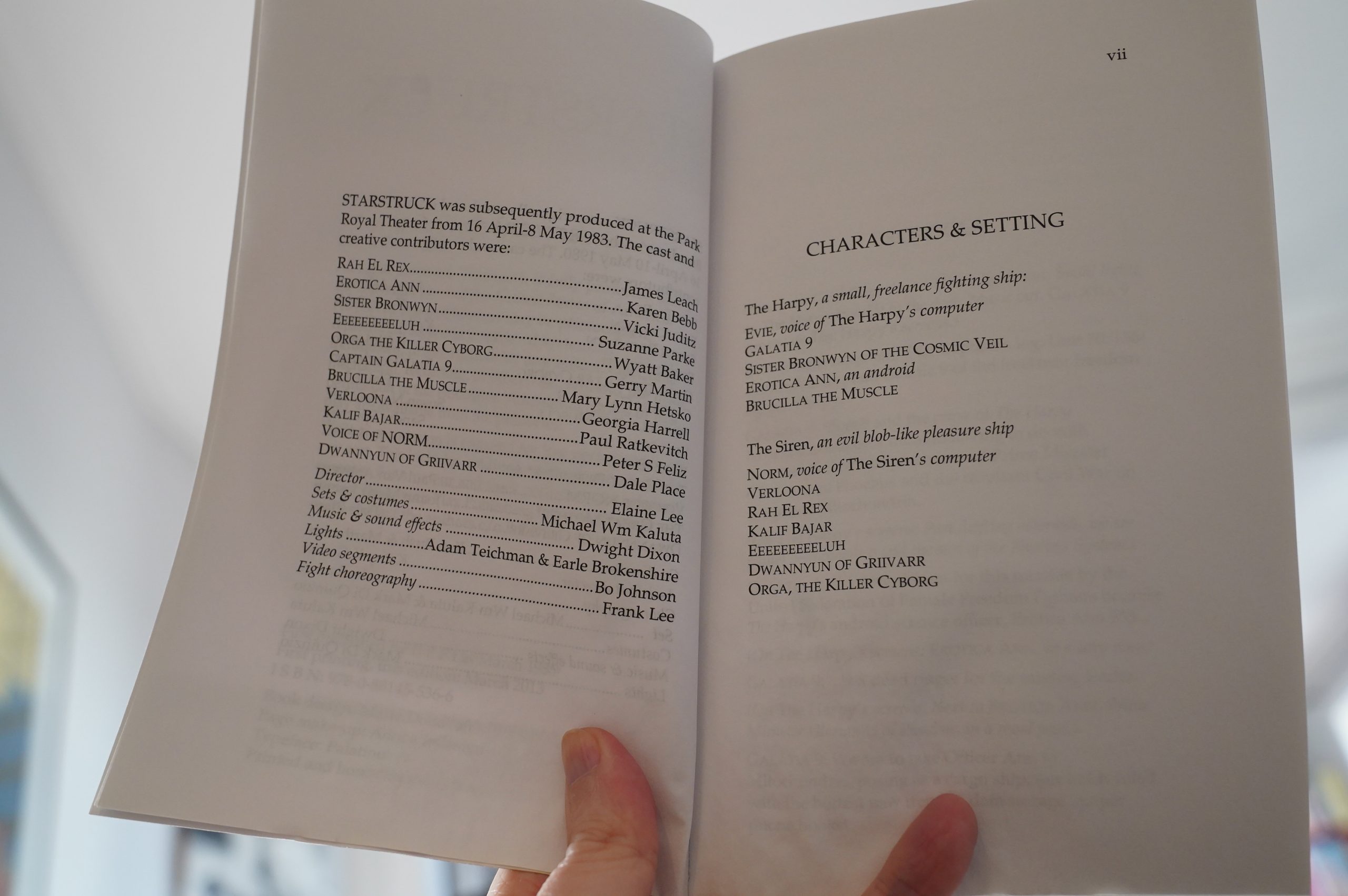 Right, so this is Galatia 9 with Bruscilla the Muscle (played by the Lee sisters) in one space ship, and the eeevil Verloona Ti in a different space ship. And lots of characters, but a lot fewer characters than in the comic book. To put it mildly. For instance, Kalif Bajar’s sister isn’t here, and she was a major character in the comic serialised in Heavy Metal. 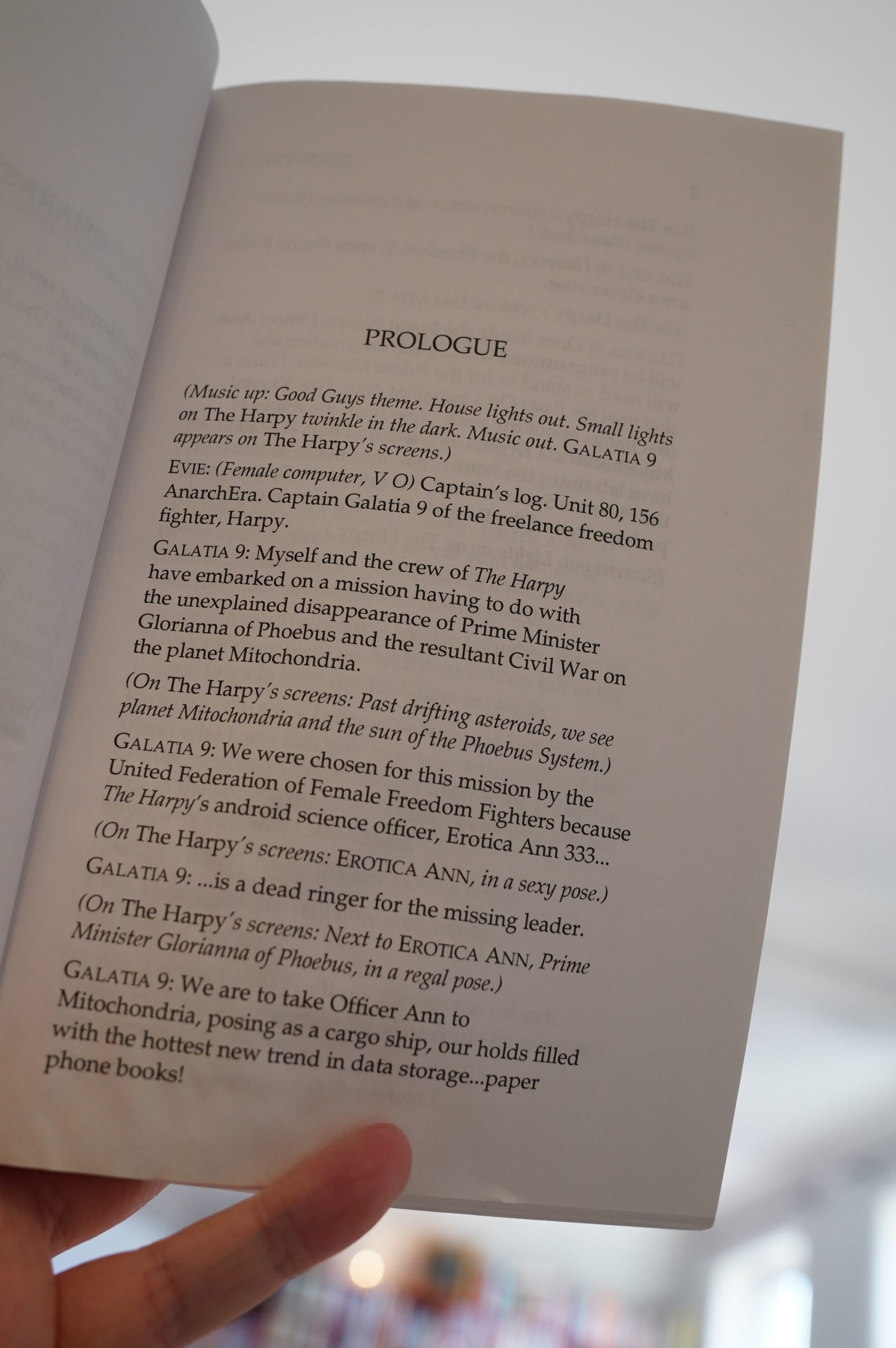 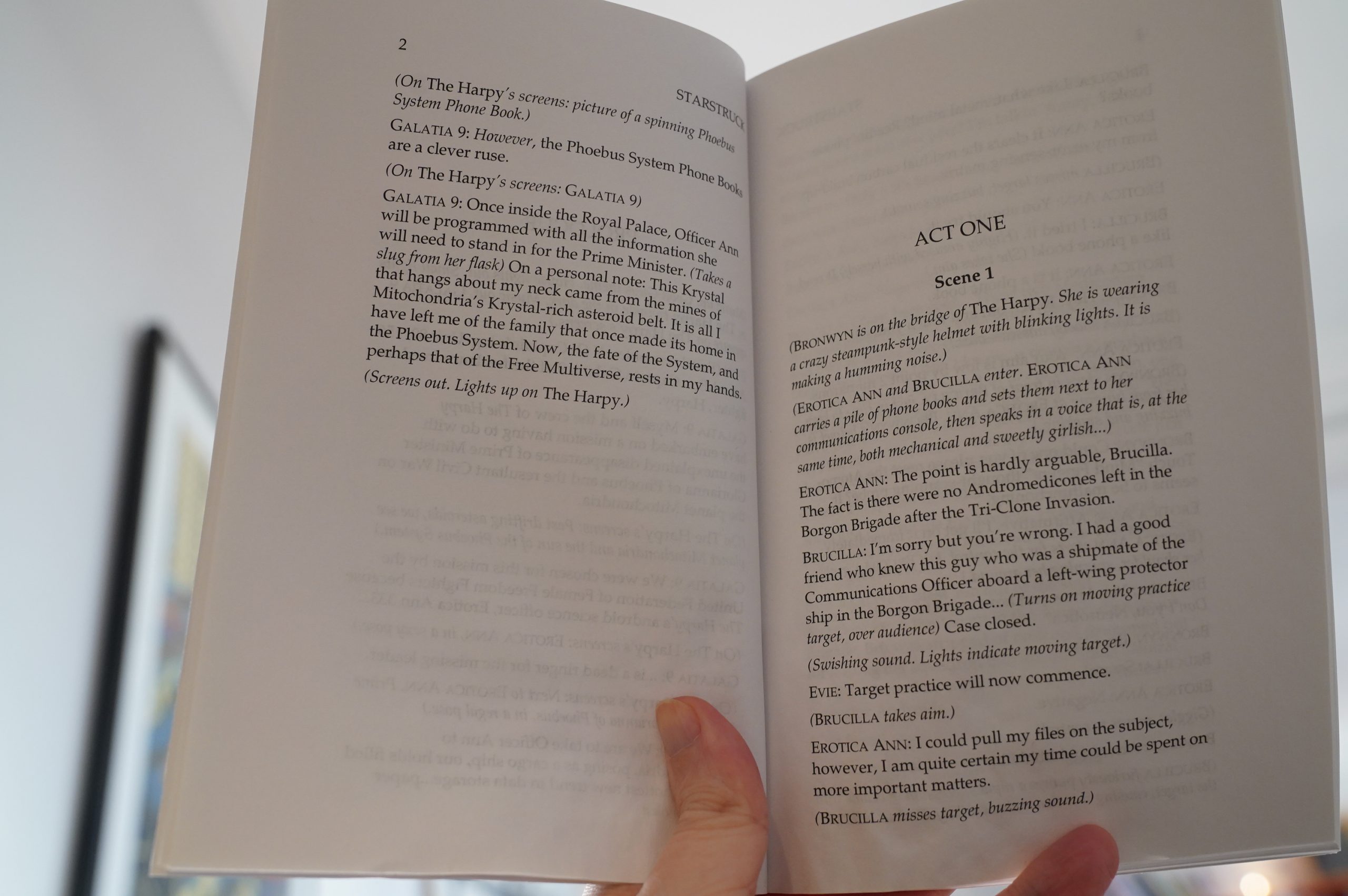 So Lee is just dropping the audience into the middle of the action. I like it. 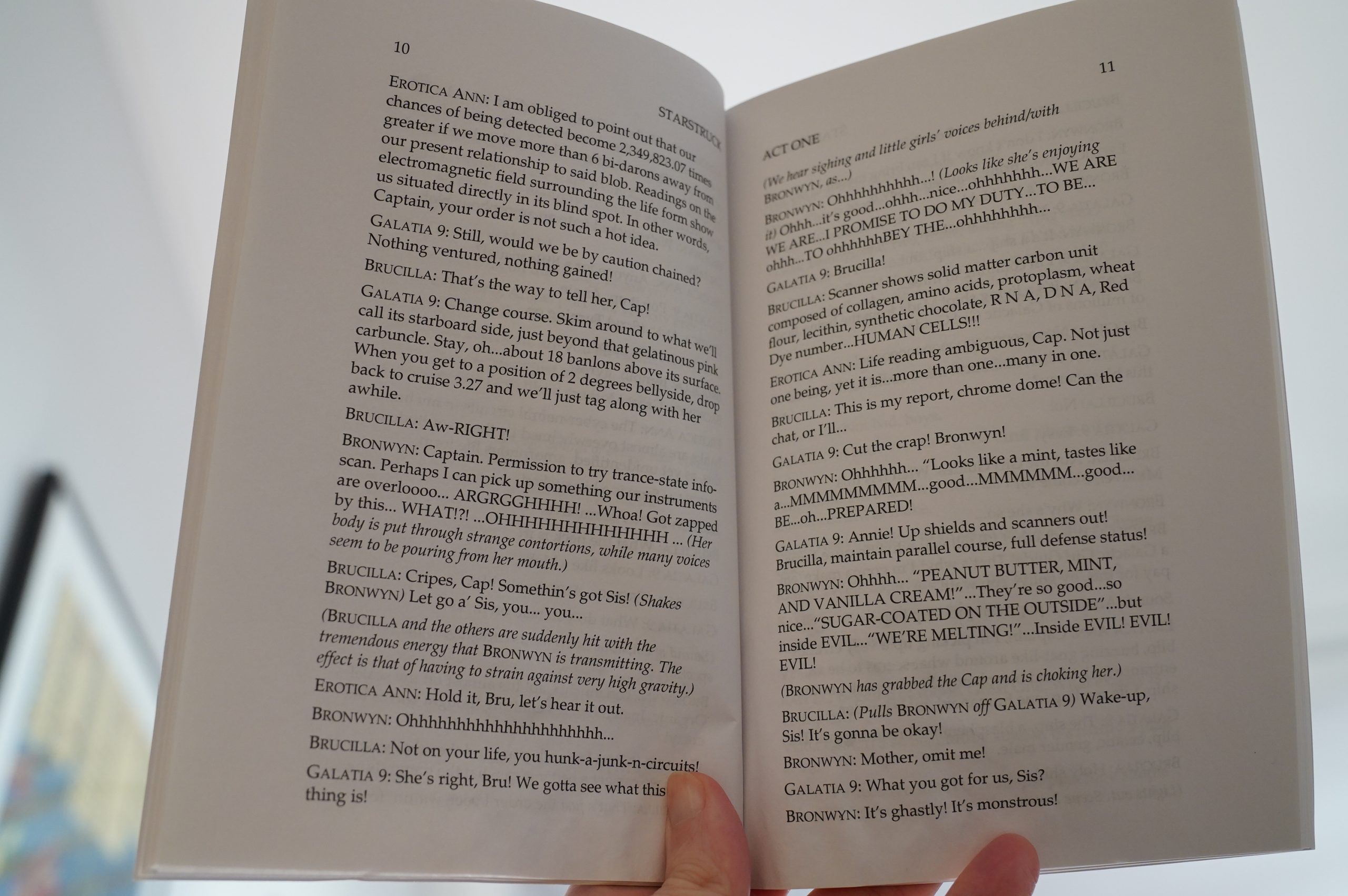 Heh heh. This is very Starstruck — the characters hamming it up in very weird ways; chaos; action.

Oh, yeah — they were kidnapping Galactic Girl Guides in the comic, too — but… did they make them into a blob of a star ship? If they did, I’ve forgotten. 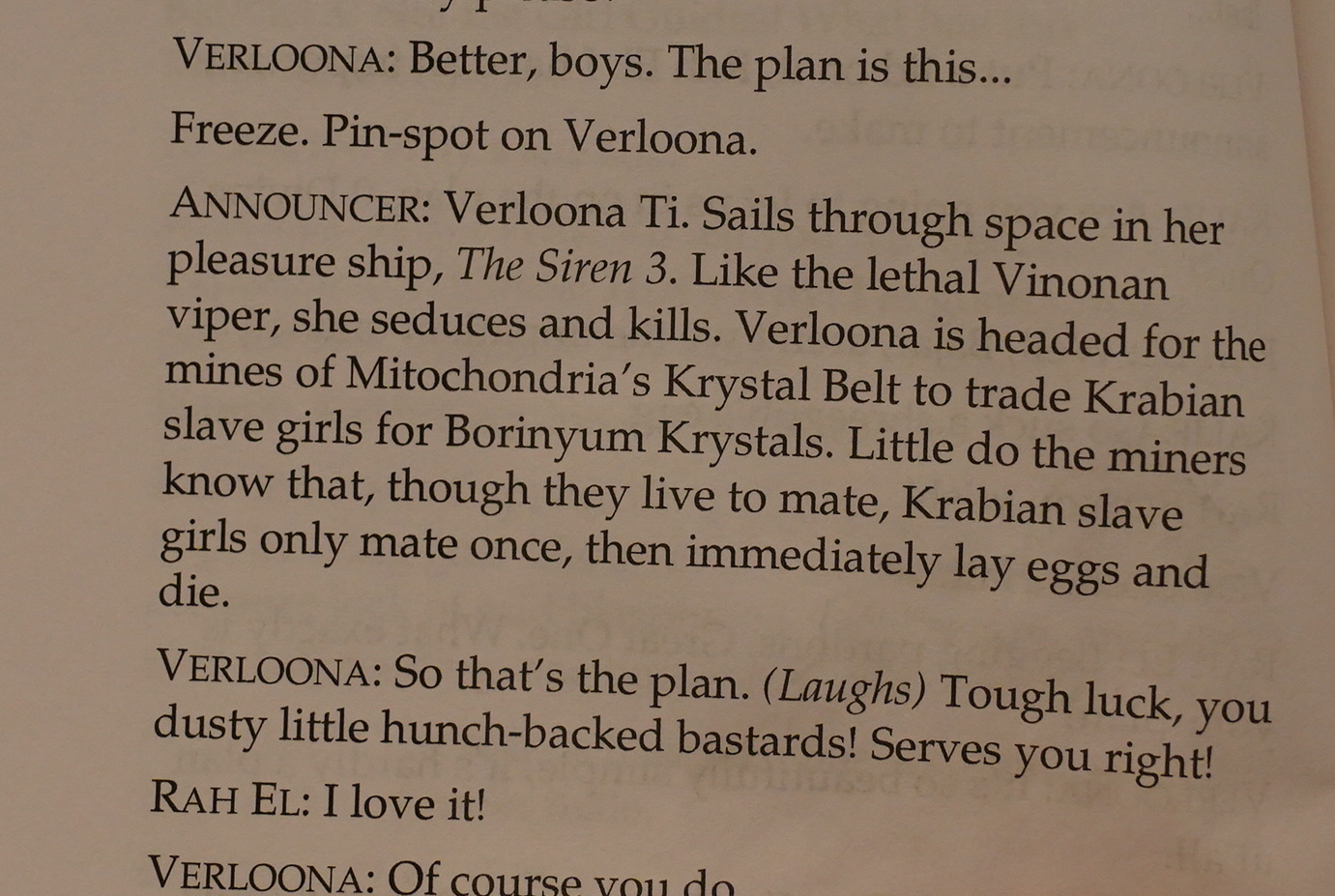 Oh, man, I wish I could have seen this play. It sounds like it must have been a hoot to watch. And all that technobabble. I love it.

Simon Cowell!? Did he exist back then? Has Lee edited this slightly for this edition? 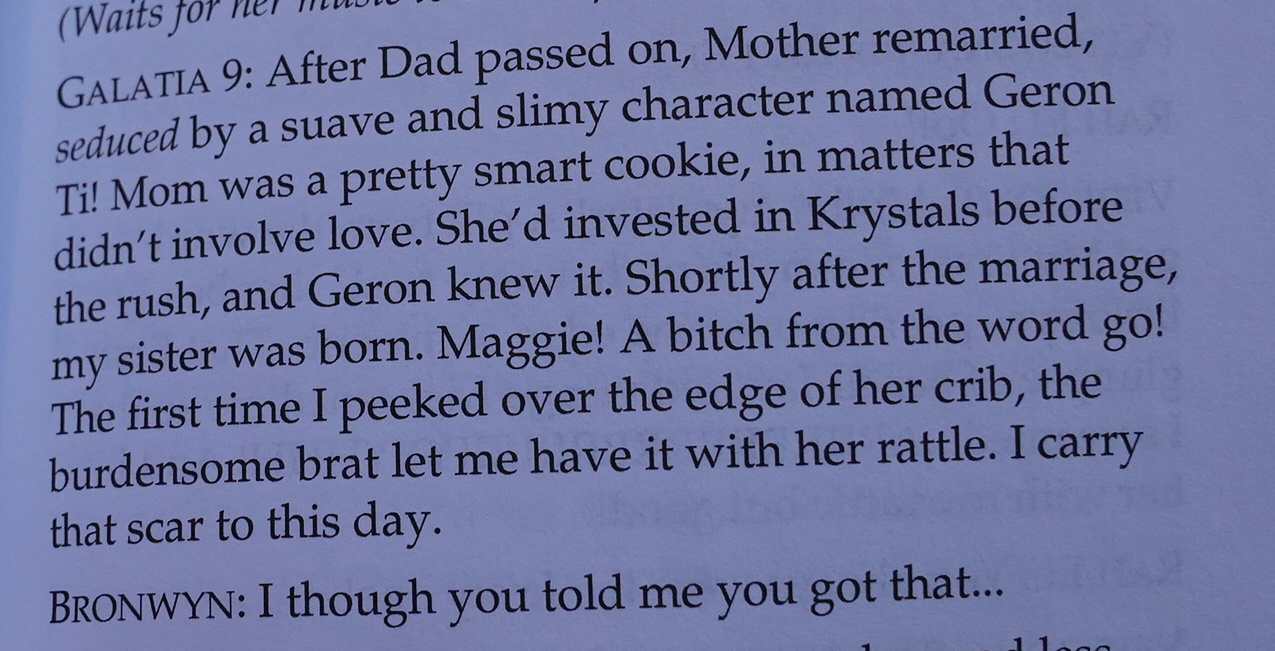 This is so dense! There’s so much being launched at the audience; it’s like… it’s like a 30s screwball thing, where everybody is talking all the time, see? Here’s the same scene from the comic book: 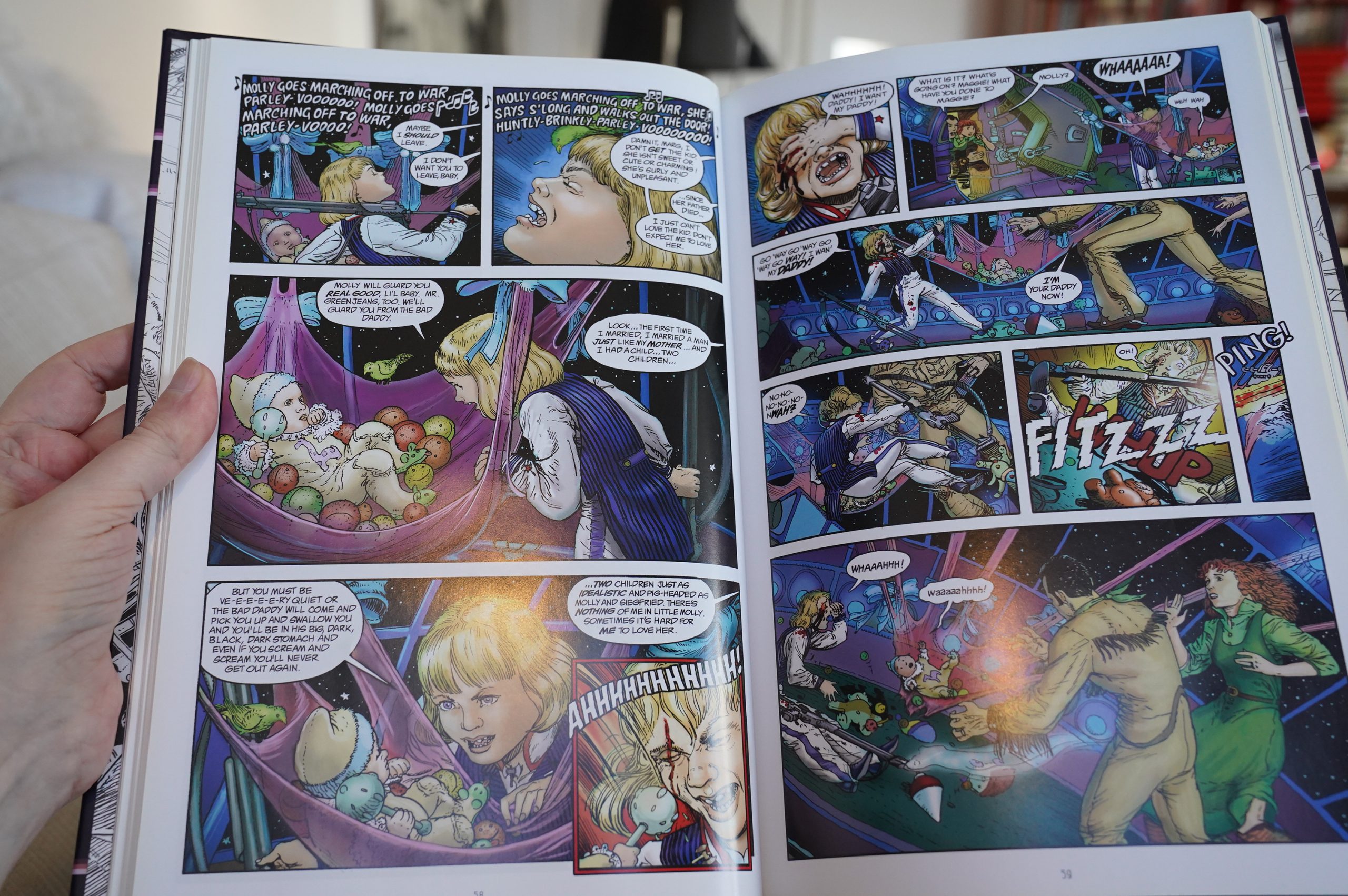 The two last sentences there are basically these two pages. 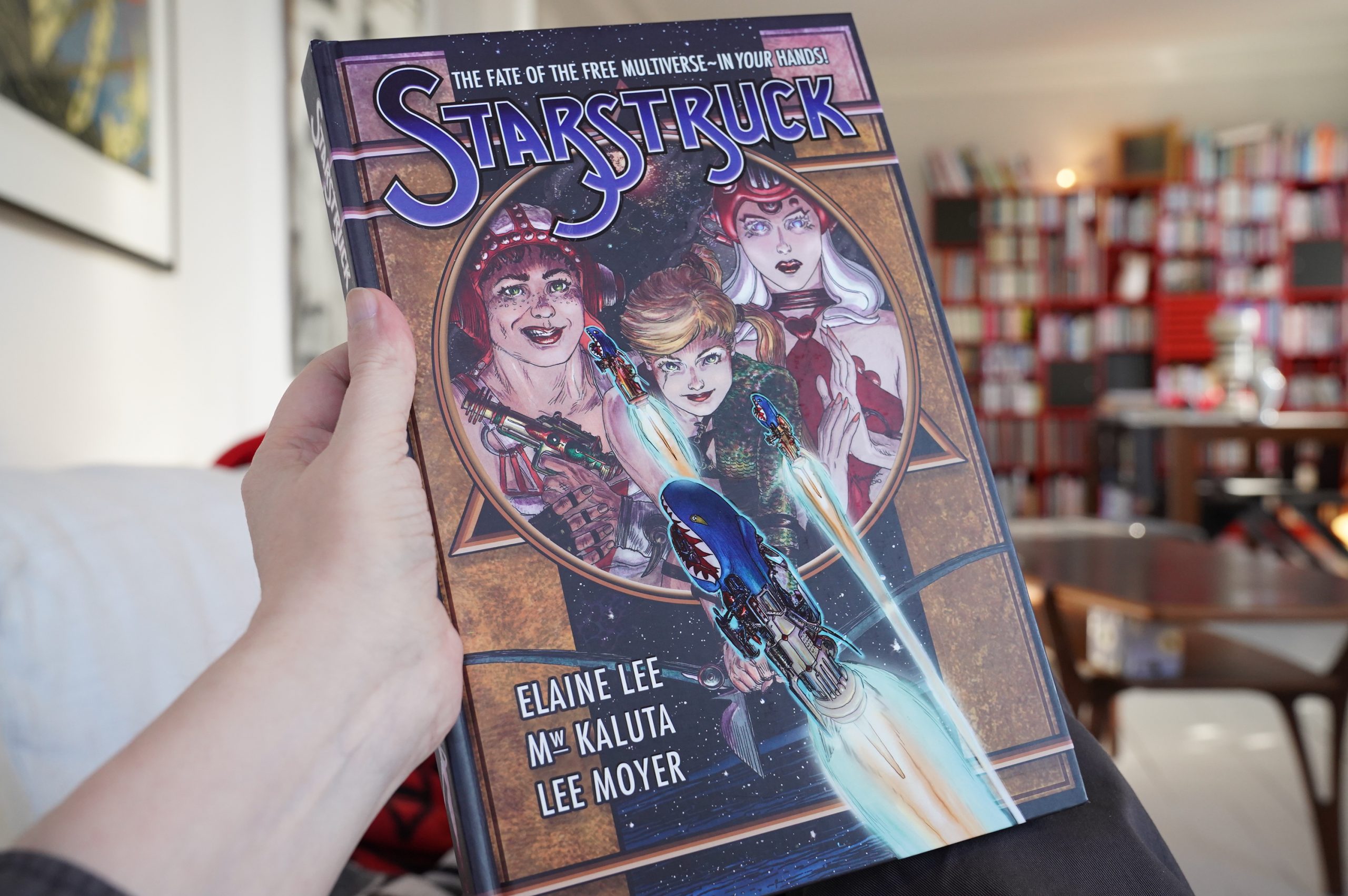 (This is from the IDW edition — the beautifully restored and expanded edition.)

Oh, we get the same scene from Verloona’s side, too… 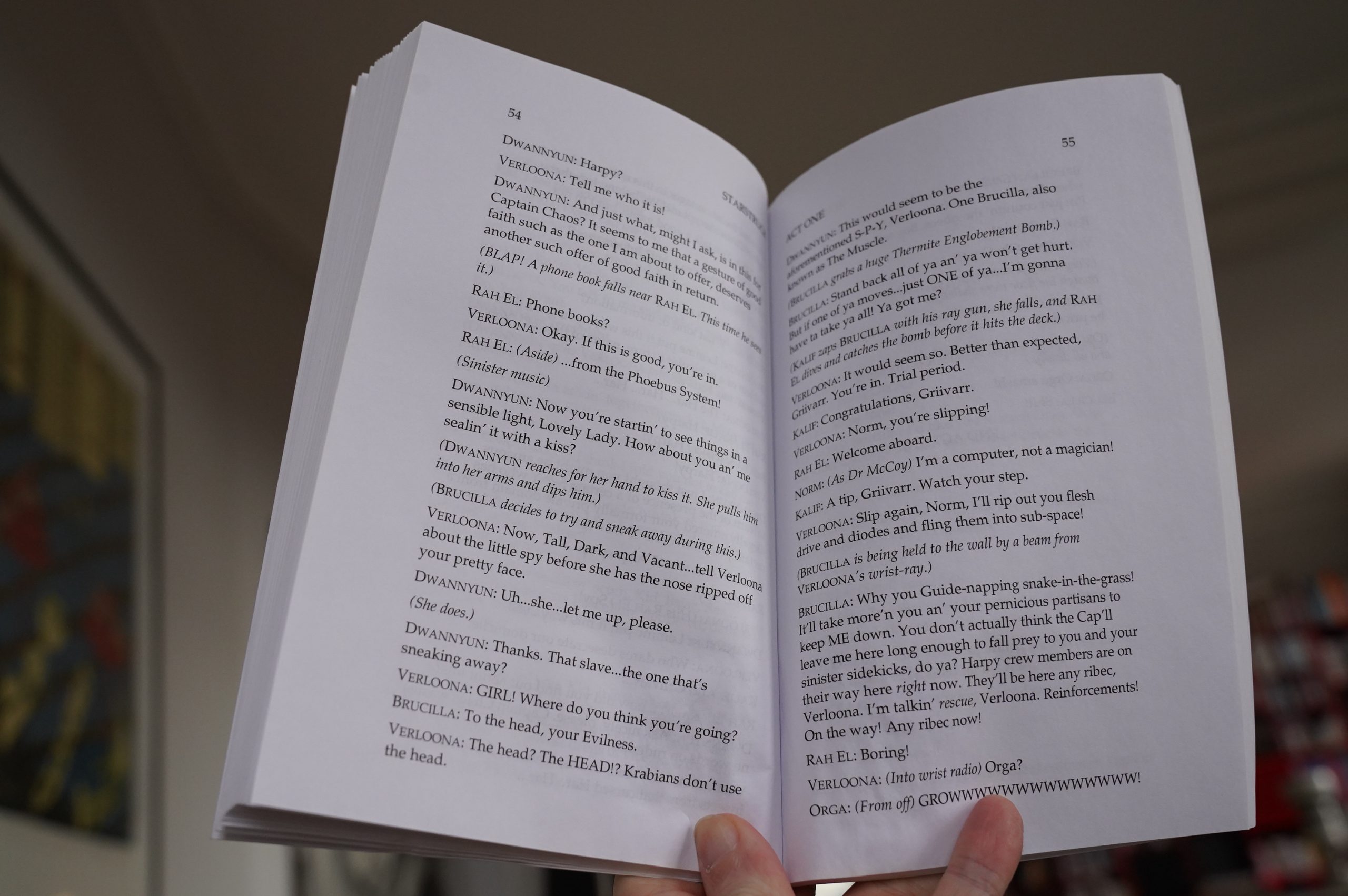 Anyway, the actual plot of this play has no relation to the one in the comic — but the characters are mostly identical. It’s fun! It’s like… for the comic, they’ve taken all the backstory and most of the characters and expanded all of that, and then added a new plot. A plot not involving phonebooks dropping from the ceiling all the time.

Hm… Terminator is from 1984, and the first edition of this printed version of the play is from 1985…

The second act is very, very hectic — I kinda thought the first one was more fun, but I can see the second act being hilarious on stage, what with all the slapstick. And then we get an alternate version of one of the scenes — with a song and dance number.

It’s a fun play, and it’s still in print. 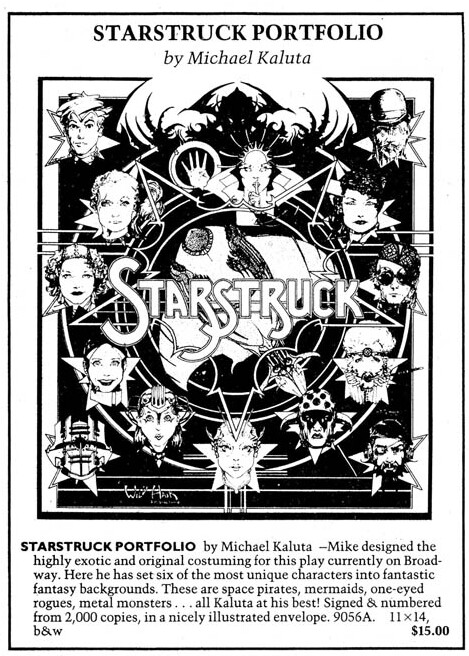 There was a portfolio…

Oh! It’s been released as an audioplay, too — I’ve gotta find that. But I can’t really find any pictures from the original off off Broadway production beyond the snaps in the Epic series.