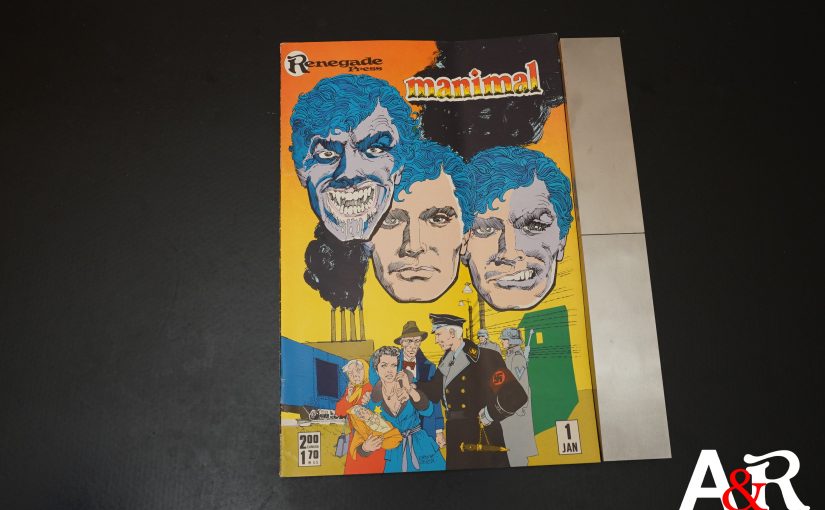 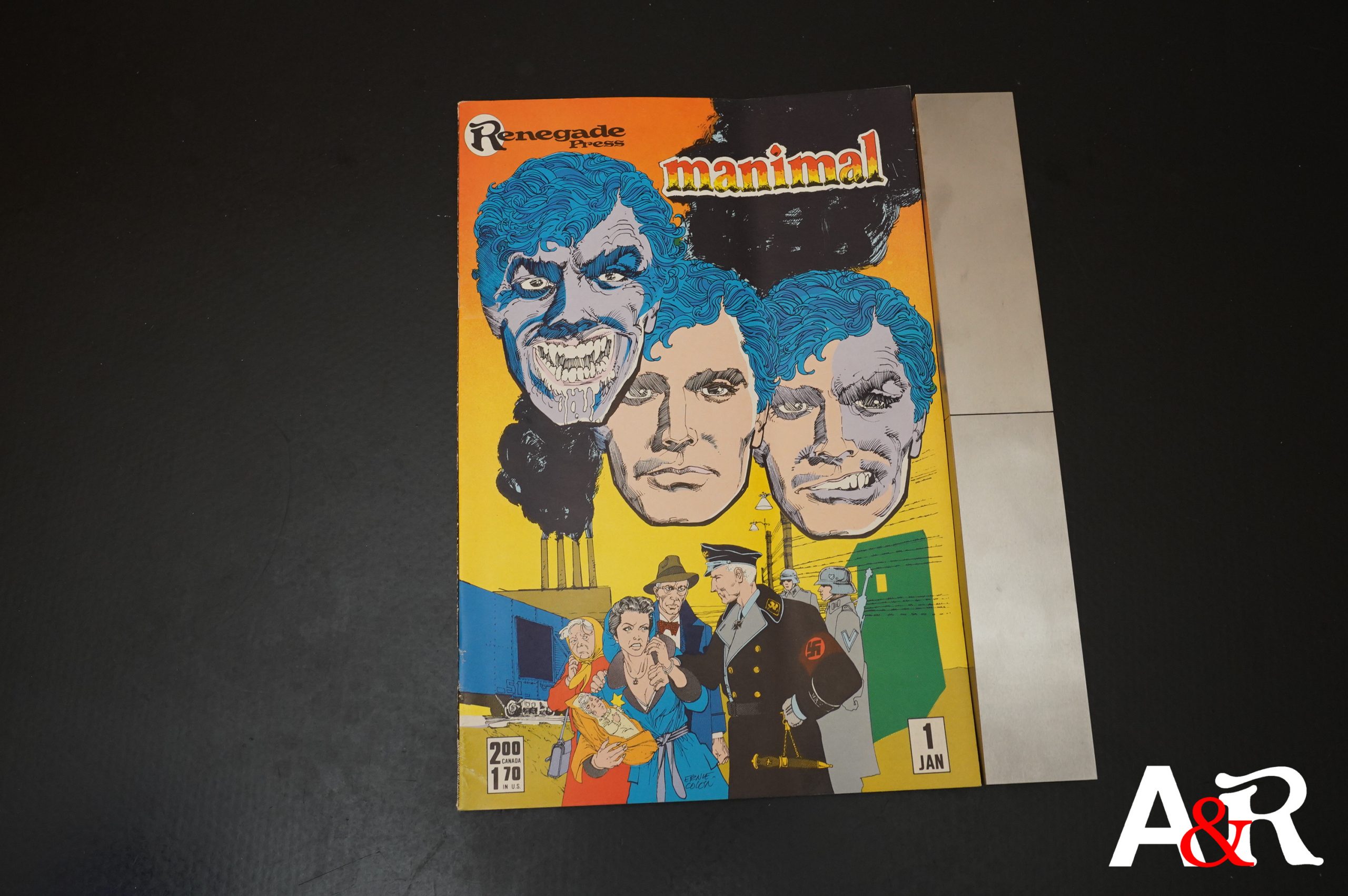 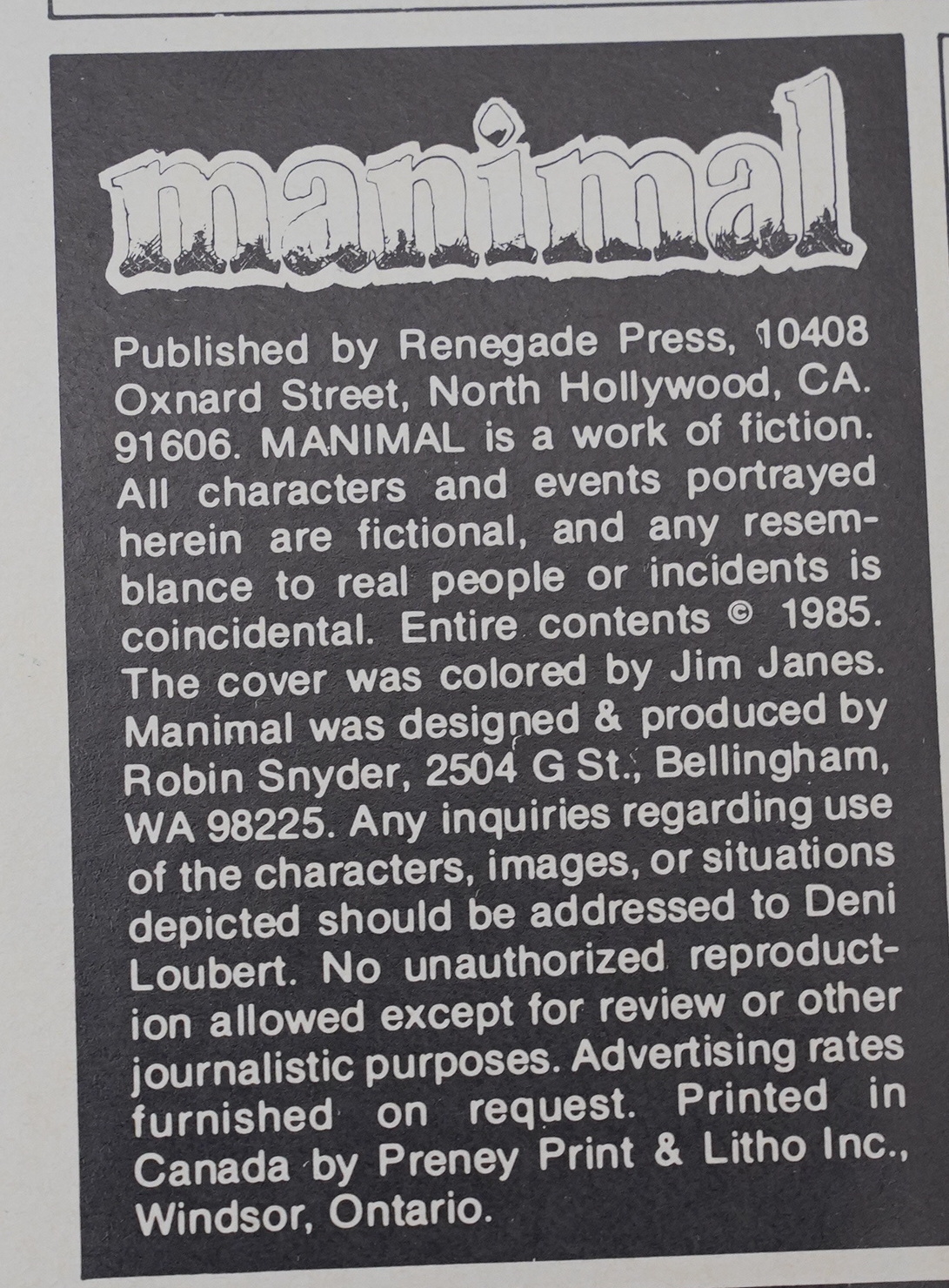 Renegade was a very hands-off company, editorially… but for such a creator-friendly publisher, they sure were vague about credits. Nowhere in this comic does it say explicitly who created it. Even the indicia is vague: It’s “© 1985”, but by whom? (Who? Hoo?) It was “designed & produced” by Robin Snyder… but does that mean that he wrote it? It’s not an unreasonable guess, because he did write some of the stuff in the Revolver anthology.

But let’s read the first three pages of Manimal. 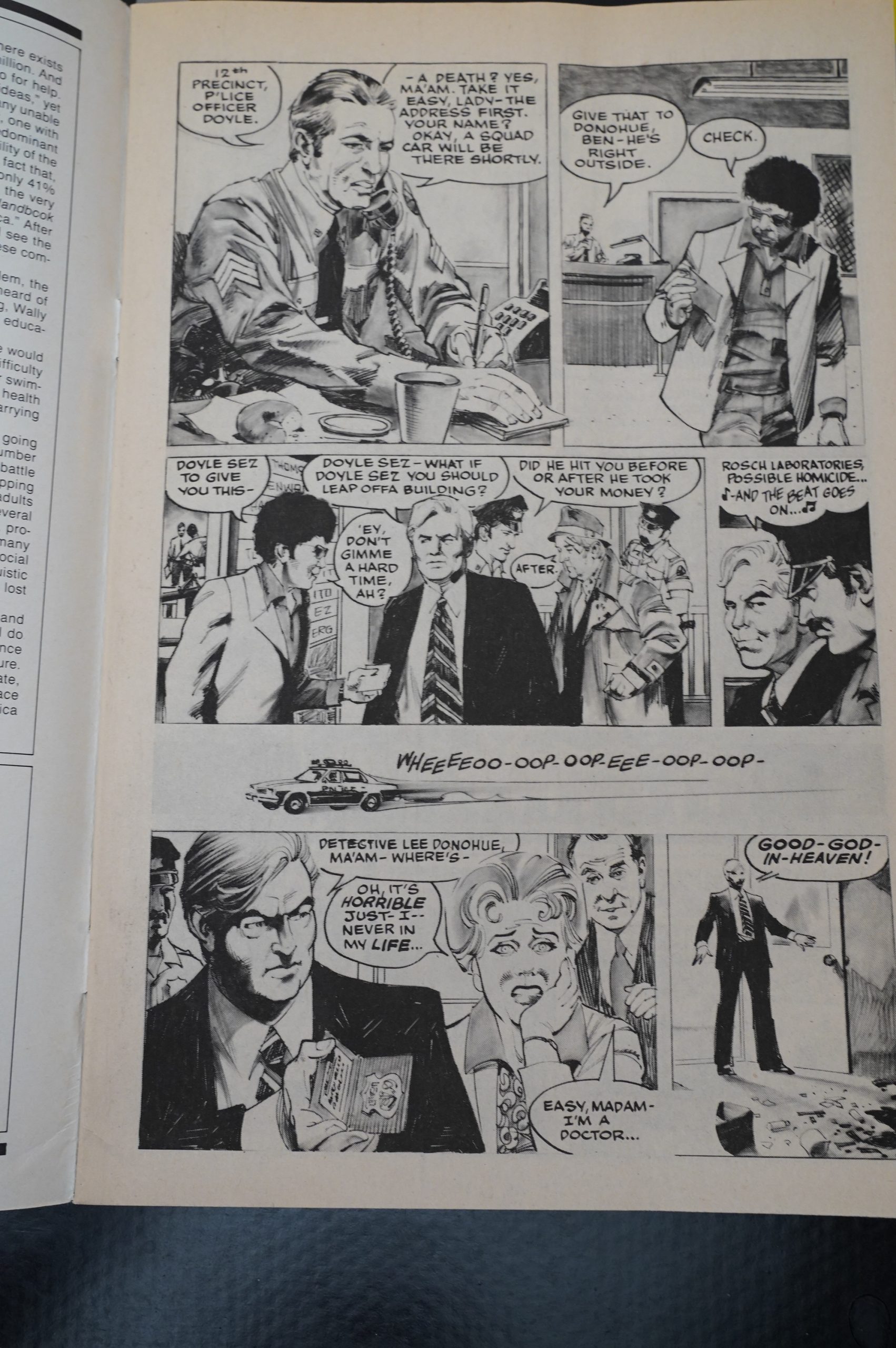 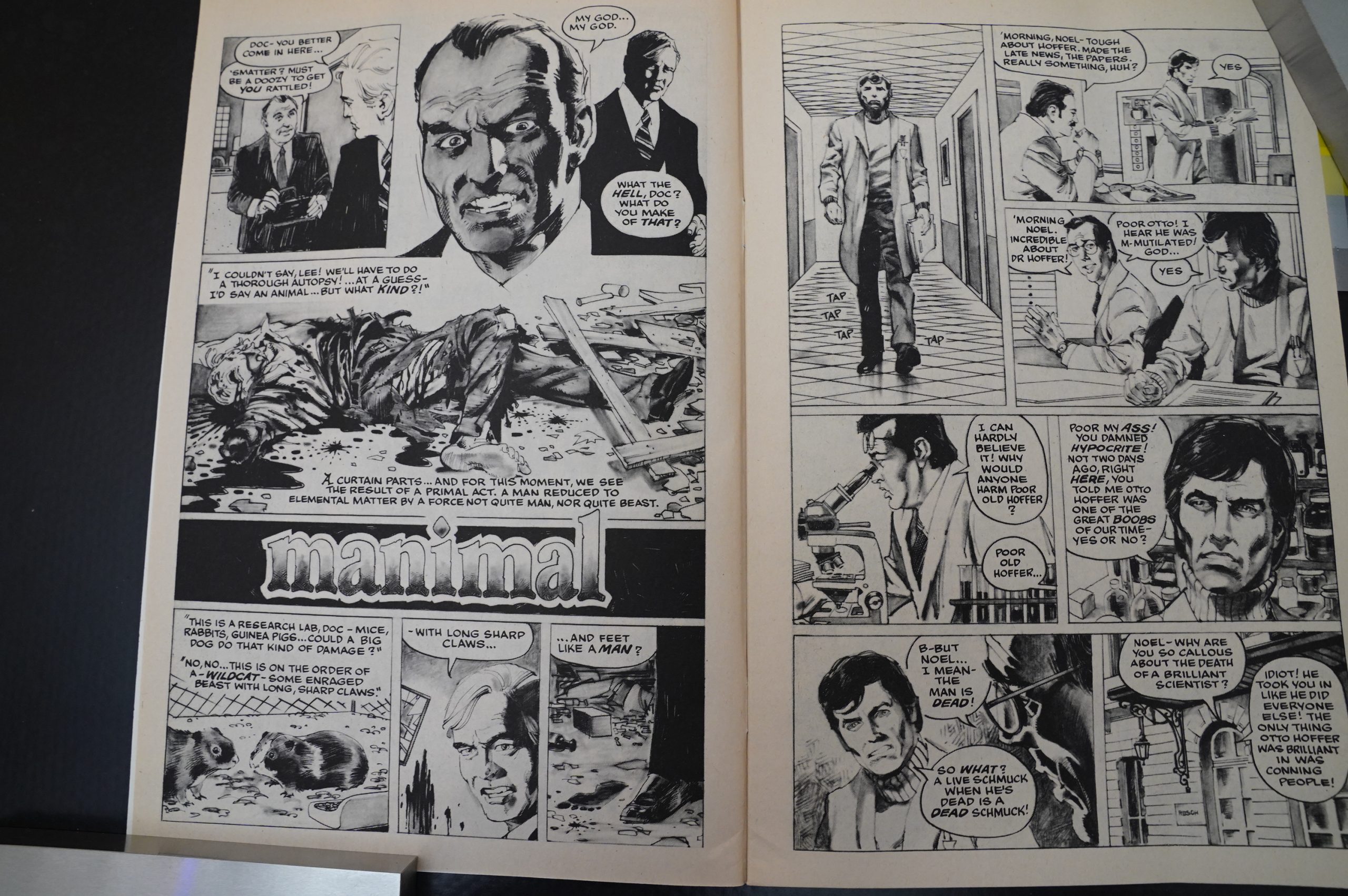 So this is quite grisly, and apparently a comic about a man/monster who kills scientists.

I like Colón’s artwork (and it’s presumably by him, because the back cover is signed by him, and besides — it looks quite like Colón artwork). There’s some nice storytelling touches: The final panel of the left-hand page is of a foot print (“… and feet like a man”), and the first panel on the next page is of a man who’s walking, with feet saying “tap tap tap tap”.

I mean, it’s just a little thing, but it’s fun. 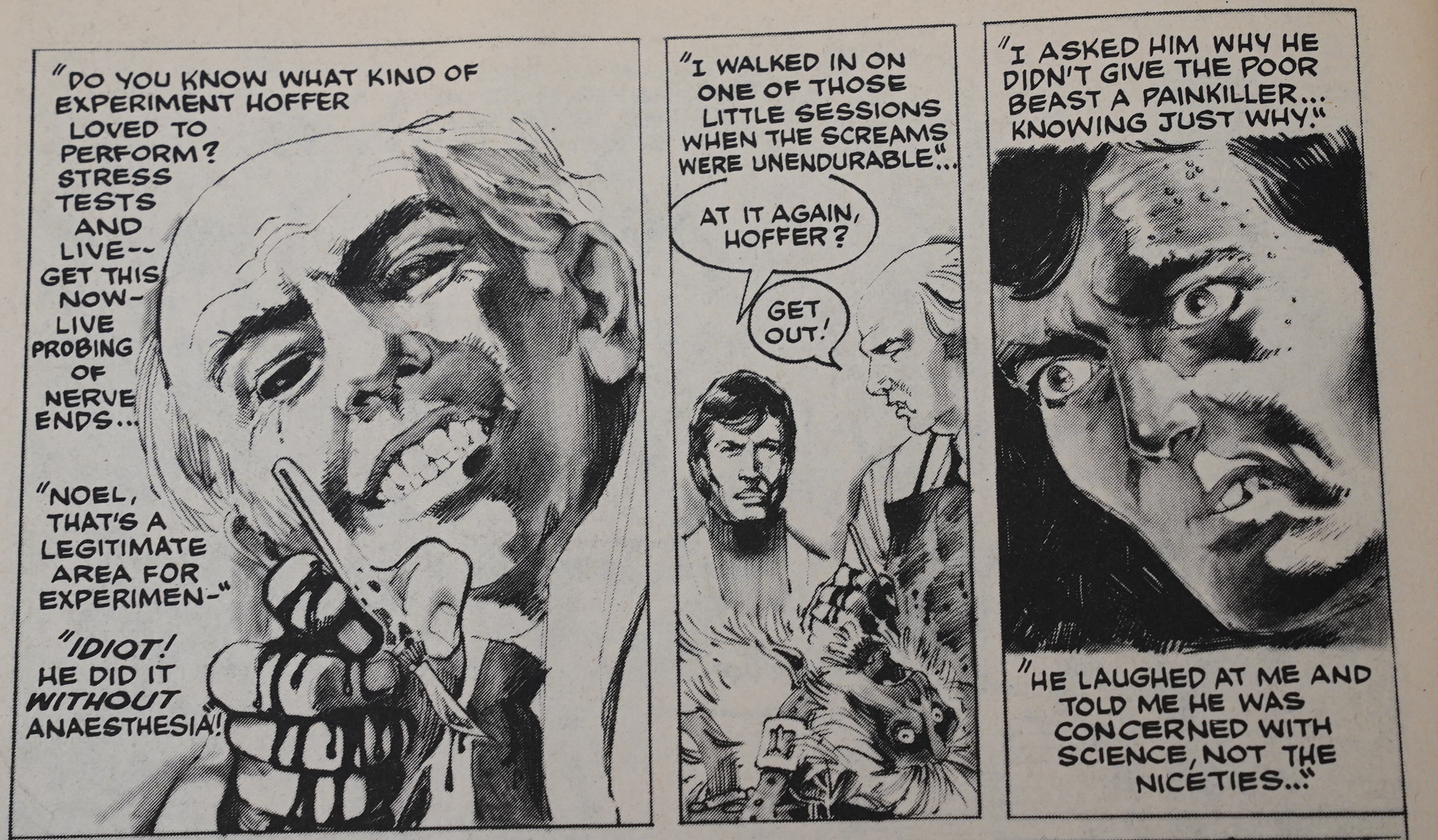 Then it turns out that the scientist (who was killed) was totally evil! 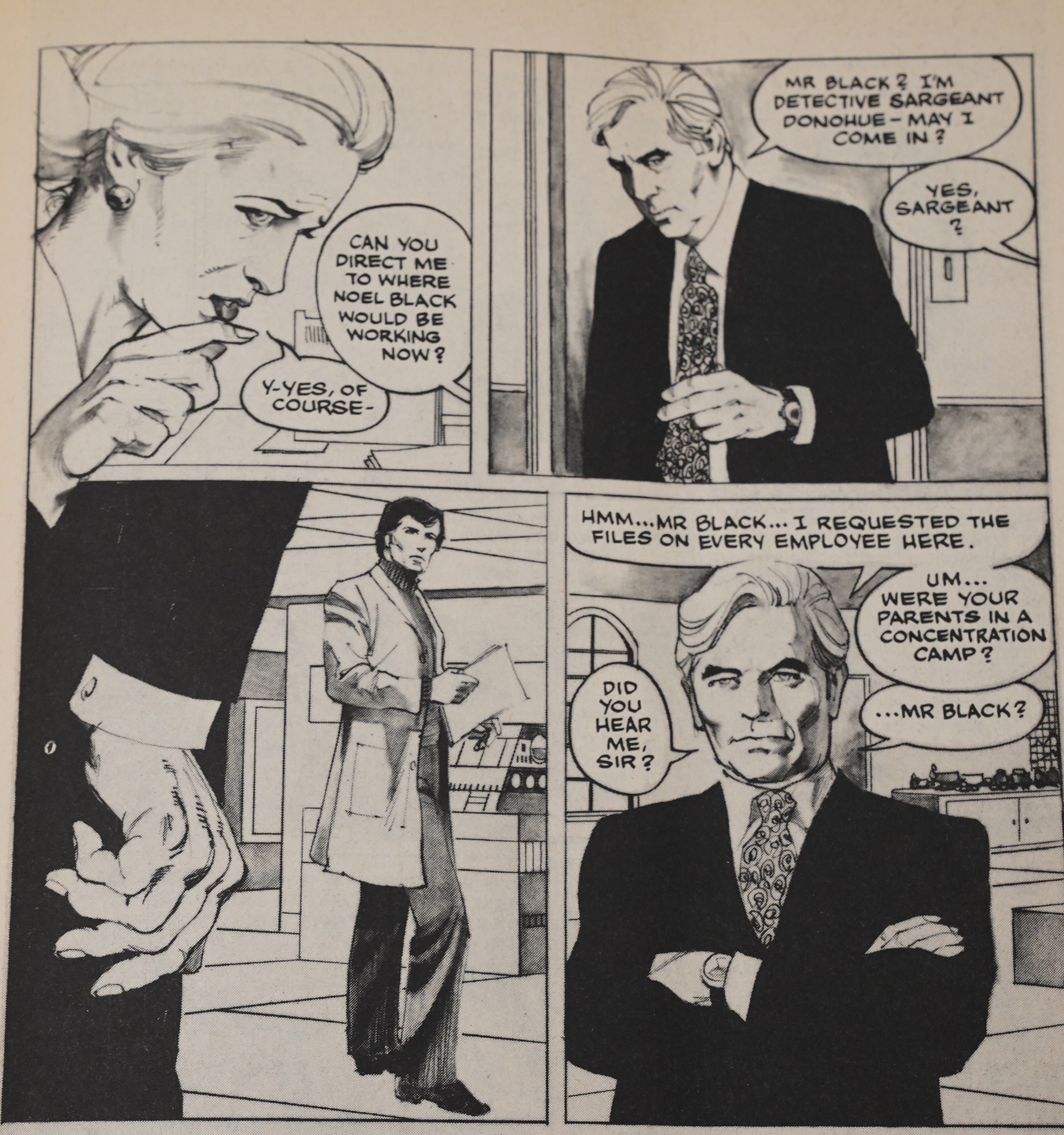 The panel transition I nattered on about up there made me really wonder about transitions like this. There’s a hand very prominently displayed in three of these panels — does that have a meaning? 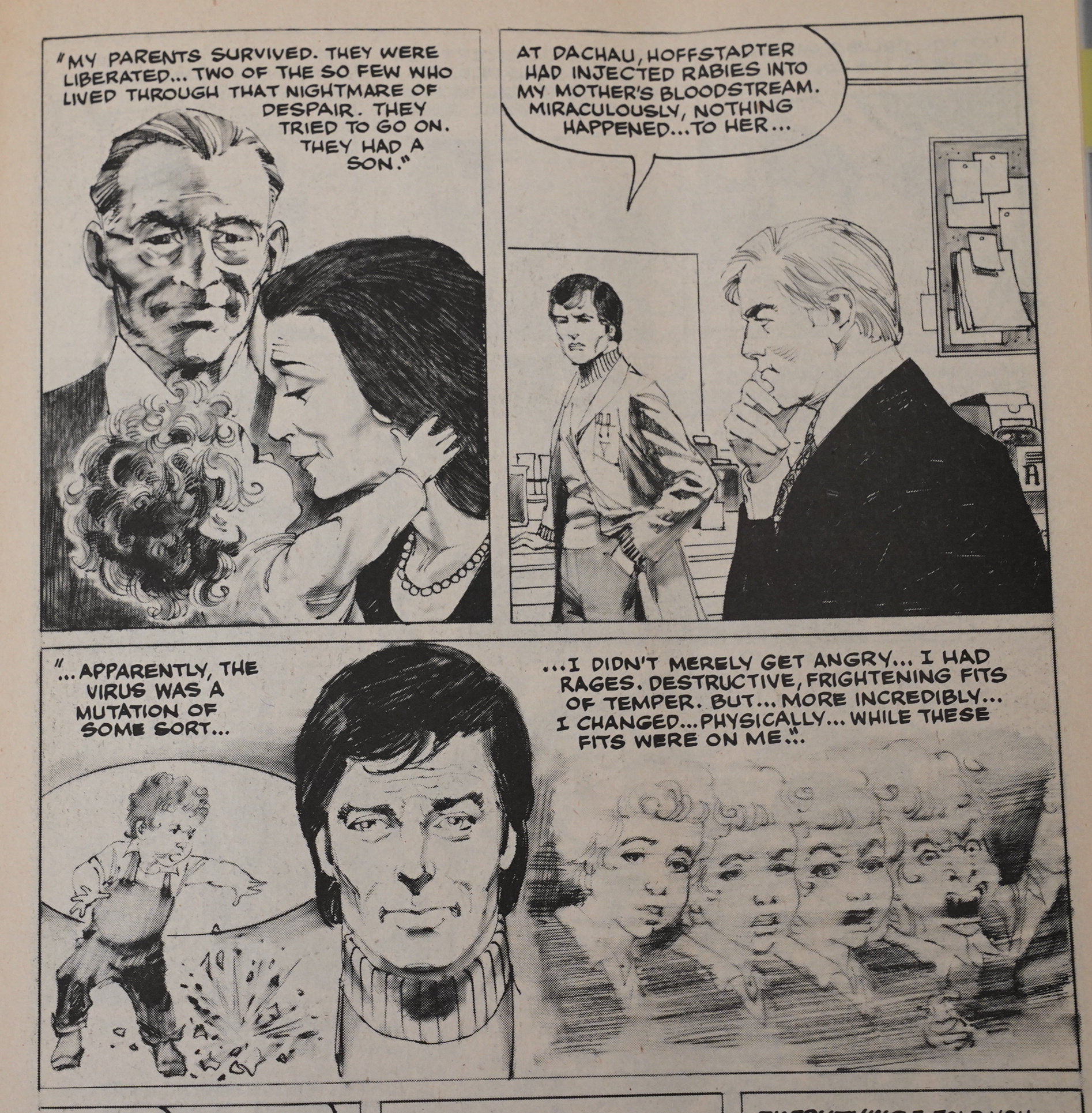 Then it turns out that the doctor was a real, actual Dachau killing Nazi, and the Manimal guy was the result of Nazi experiments on Jews. (And now Manimal is killing Nazis, of course.)

Is this really crass? Or, like Inglorious Basterds, an apt revenge fantasy? Or both? 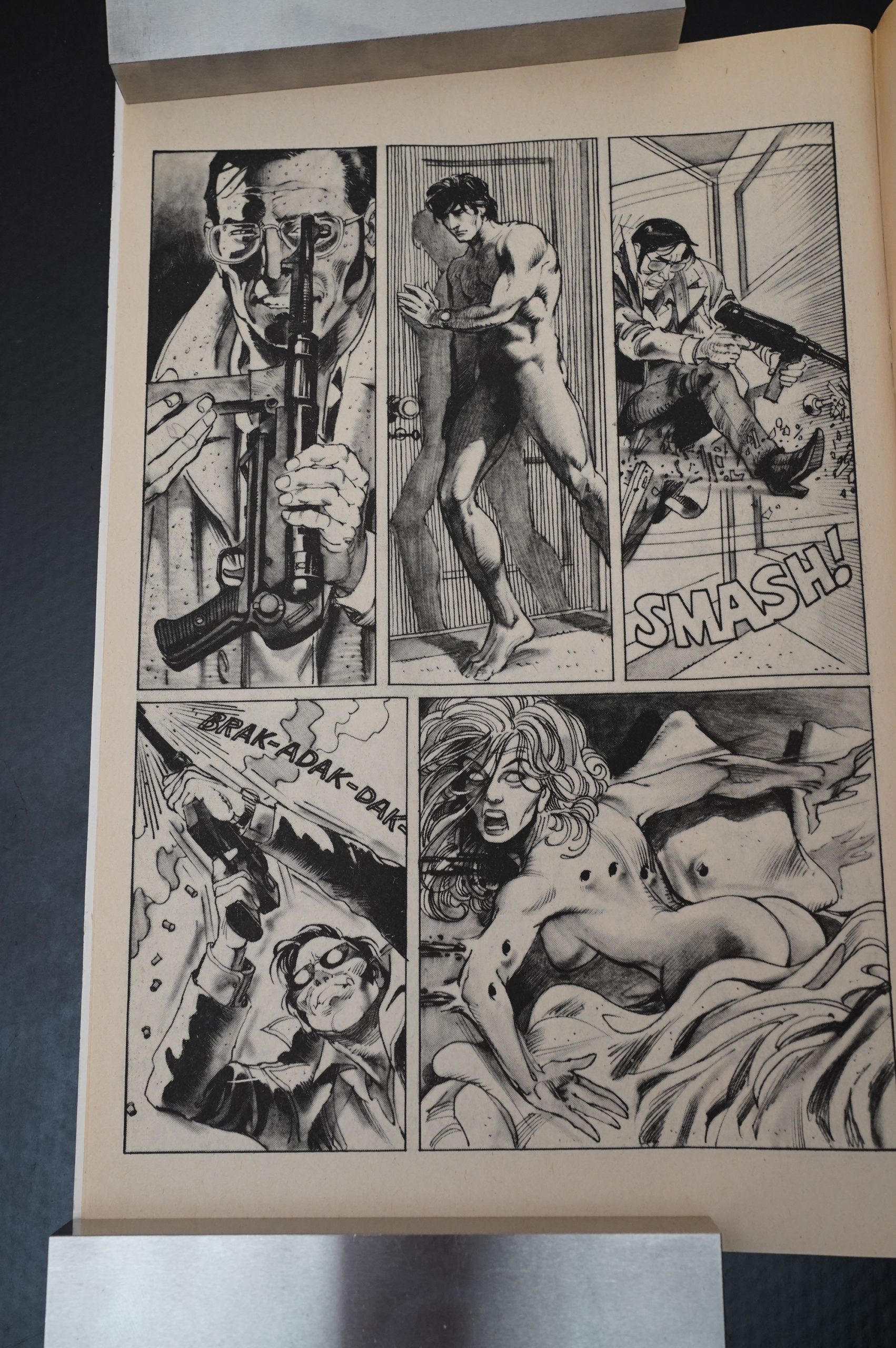 That’s a very odd pose, even for a corpse. (Manimal’s girlfriend here gets fridged by some Nazis, because having his parents in Dachau wasn’t… sufficient?) 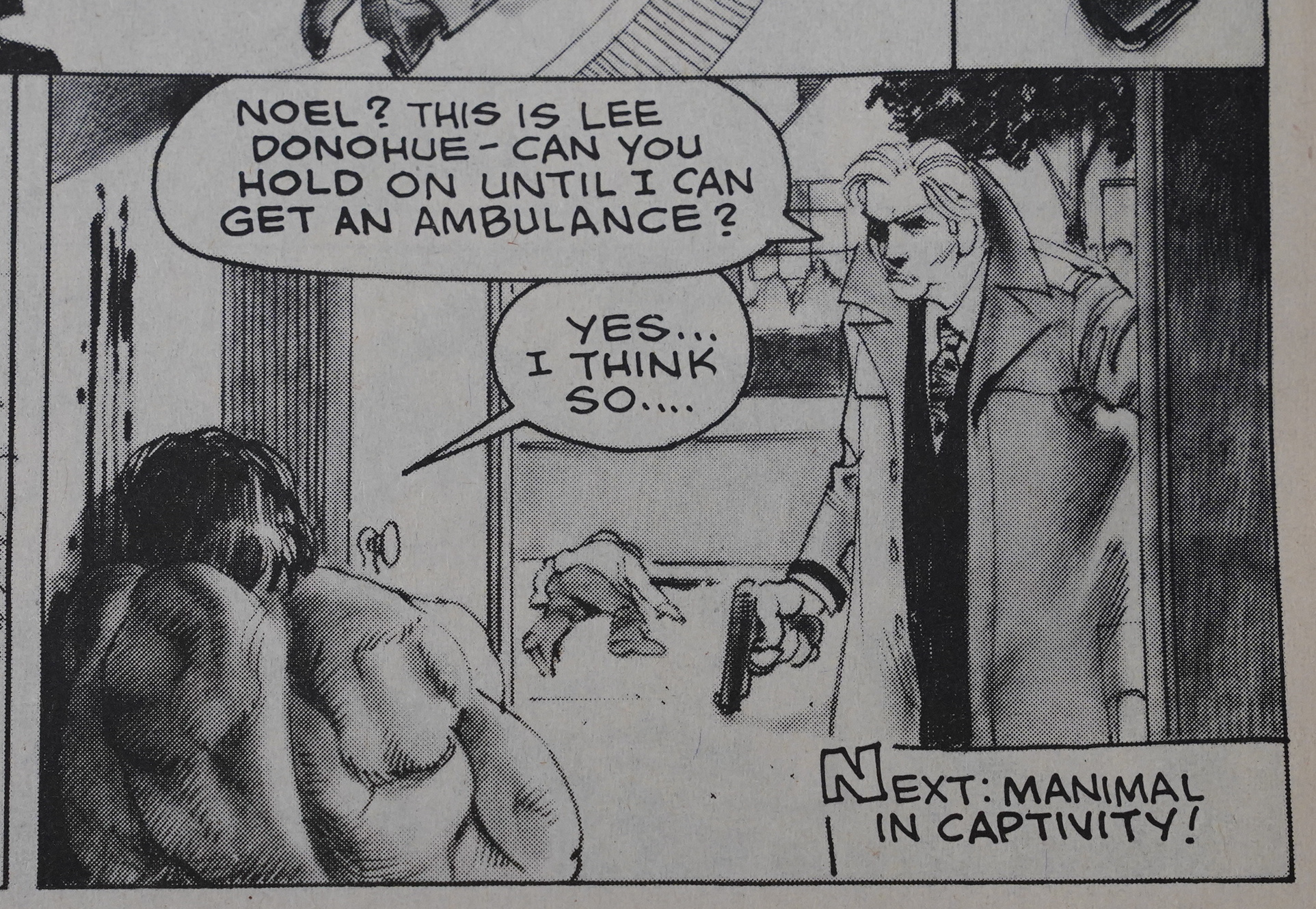 I should have known it! Manimal wasn’t made for this comic — it’s a serial, probably meant for some anthology. It’s not in magazine aspect ratio, so probably not for a Warren anthology?

The Revolver anthology was a collection of junk Snyder had apparently not been able to sell anywhere else (plus some Ditko stuff), so perhaps this is just more of that? 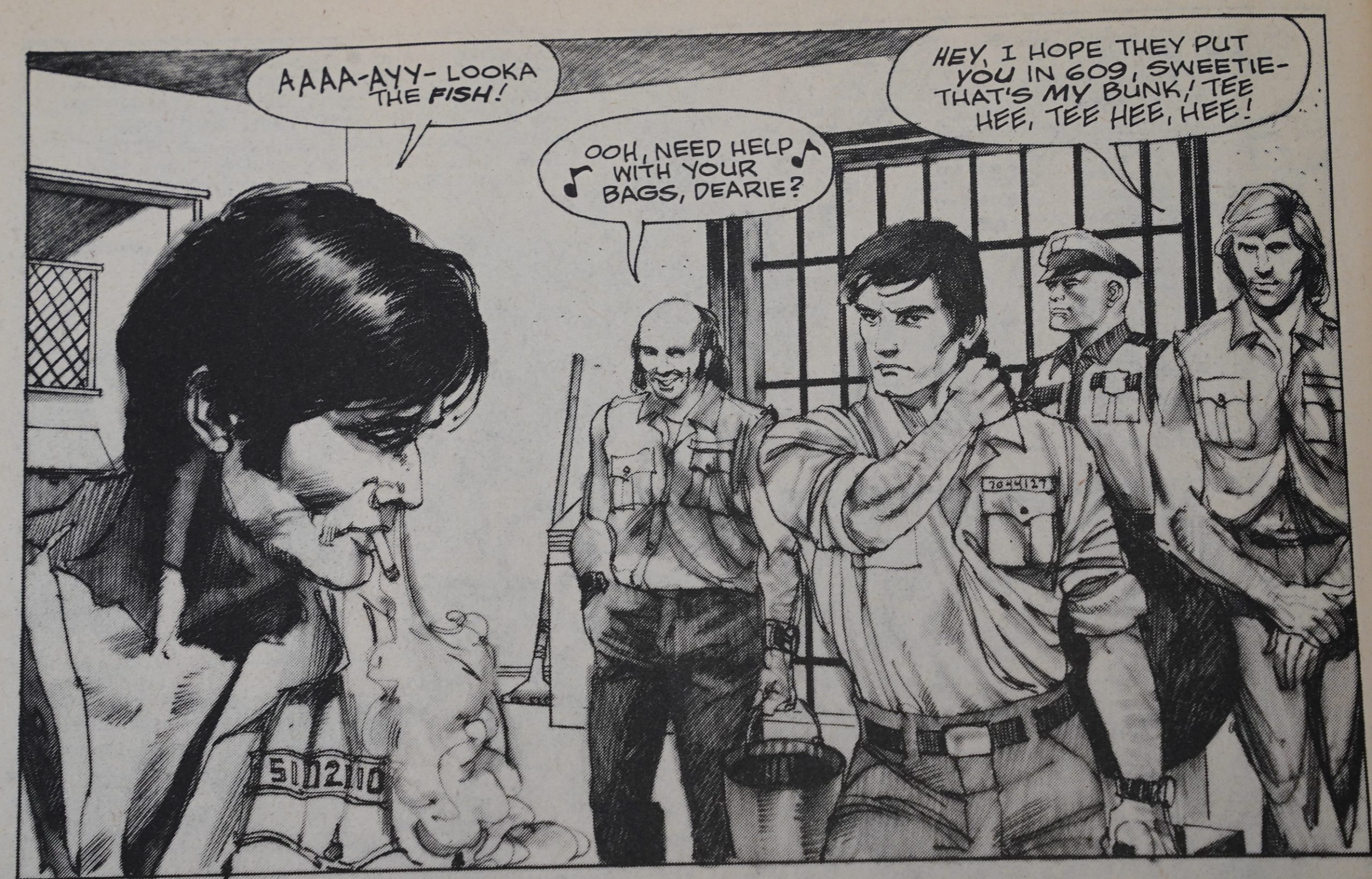 We get three of these eight page stories, but there’s really no resolution. It feels like it was designed as a serial where Manimal would go around killing Nazis every episode, but the final page seems to have been reworked as an ending of sorts. It’s a complete non sequitur, though — we’re not even given a hint as to how he got out of jail. 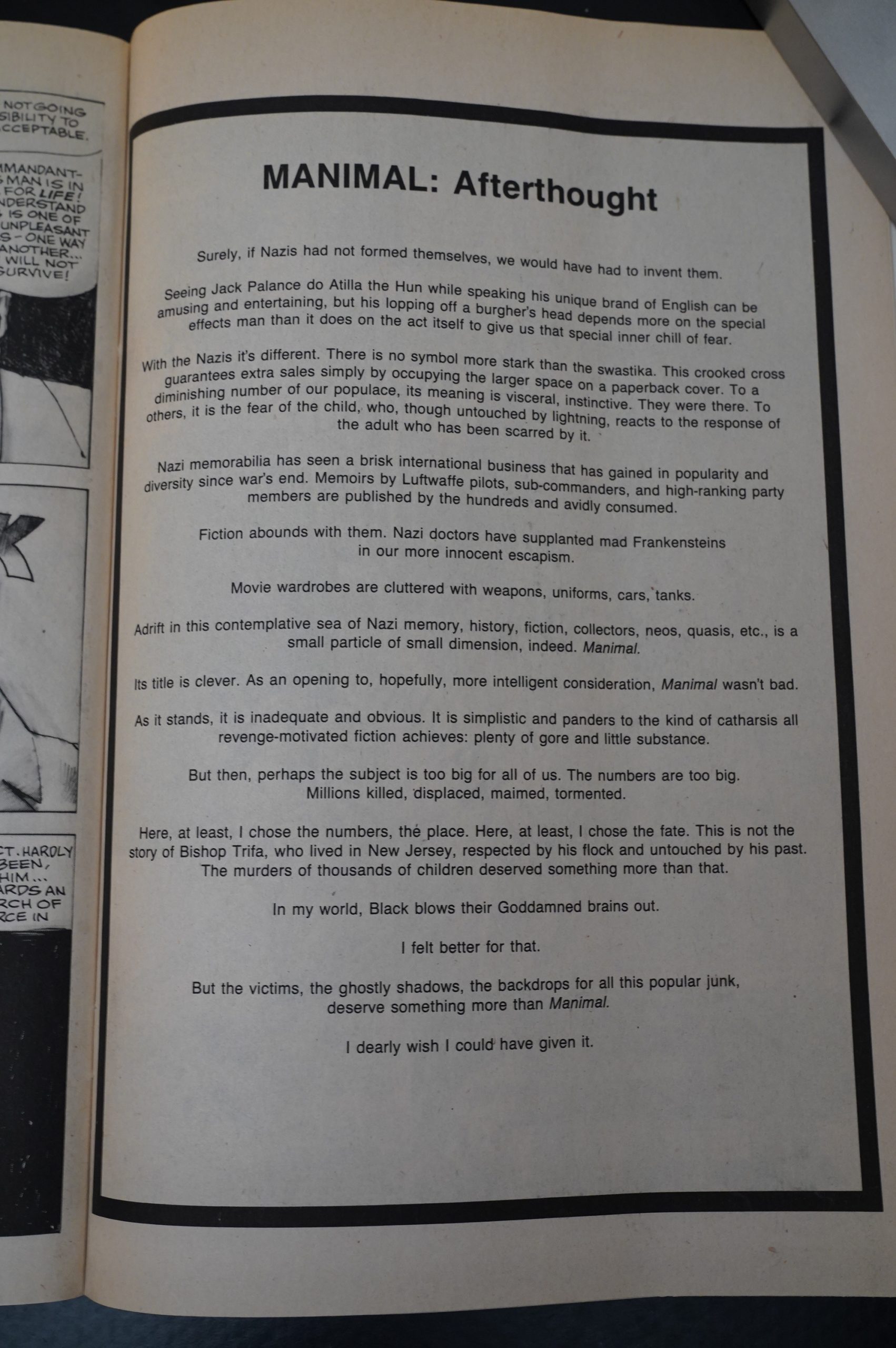 Somebody (possibly Colón? According to Gary Usher’s Robin Snyder’s Comic Book List) writes about how victims deserve “more than Manimal”. 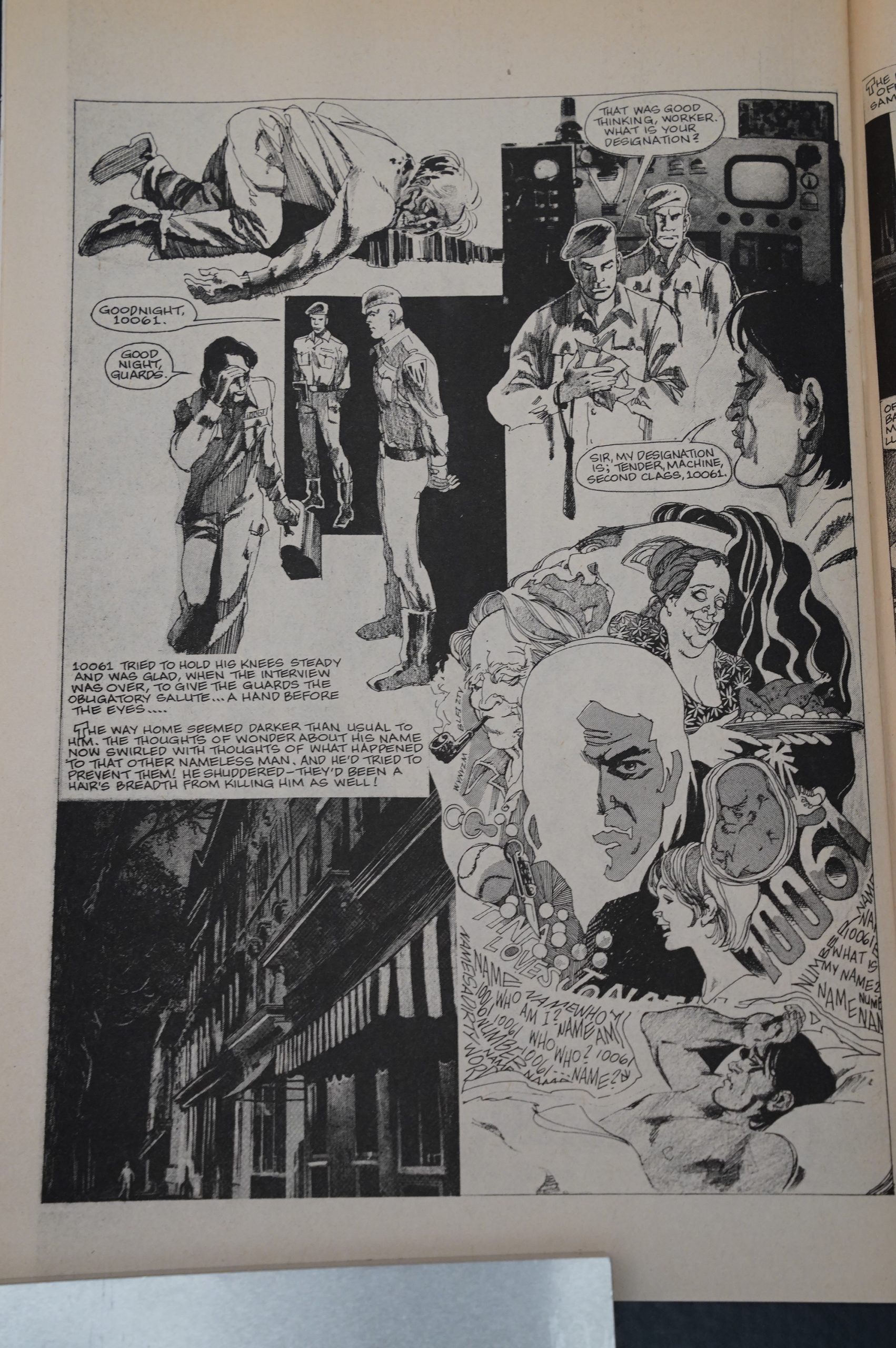 The story is O. Henryish.

These stories apparently originally were printed in Hot Stuf’, a 70s anthology I’ve never heard about before.

What differentiates “Manimal” from
similar current company comic pulp
is its level of action—paperback
violence reminiscent of Gil Kane’s
undeservedly forgotten His Name Is
Savage—and Colön’s willingness ,
however tangentially , to delve into
the morally murky areas his
subject brings forth. Black’s anger,
responsible for his transformation,
never fully abates as it does with
Bruce Banner’s Hulkishness, and
this makes him a discomforting type
of hero. Instead of overexposing his
lead in the Marvel manner, ColÖn
focuses on others’ responses to
him; the approach reduces easy
sentimentality at the same time as
it builds Black’s “reailty.”

“Manirnal”‘s opening chapter, in
fact, seems the weakest for its
greater focus on Black: an intmduc—
tory confrontation with the detective
who will dog the Manimal is especially
clumsy and awkwardly set up. But
as the series progressed and context
for Black’s actions filled in, such
moments vanished. Black becomes
increasingly taciturn , as if his
vendetta has begun to blunt his
fragile humanity even further, and
his only spoken moment of self-
defense by the third chapter is a
brief diatribe against court protection
Of war criminals. C016n’s art, too,
which in the opening relies a bit too
much on the kind of medium shot
comic strip composition Art Spiegelman
satirized in “Malpractice Suite,”
grows more varied as the series
progresses. I’m not sure where he
intended taking the strip: as the
uncompleted series now stands
(three chapters in) it has potential
for moving in several thematic
directions—including a retreat into
pat superheroics. I’d have liked to
see Black’s moral certainty shaken
a bit.

Tho story presented in Manimal is
composed of three separate install-
ments which veteran writer/artist Er-
nie had originally crafted for
another publication in the 1970s. I
have long enjoyed Colon’s artM)rk,
and this presents some of his finest.
The richness in texture and tone
gives it the appearance of having
been reproduced directly from his
pencils. It has a realistic flavor to it
often missing from his inked work;
not the slightest trace of his cartoon
influences leaks through here. The
images are not pretty, for this is not
a pretty tale, but deliver the graphic
irnpact of Colon’s message with full
force.
My opinion of his script is not
quite so favorable. Current patterns
in comics lead many to believe that
the fans will not sample your work
unless it wears at least the trappings
of fantasy. Unfortunately, I suspect
this assertion may well be true. In this
instance, it serves to over-
ly dilute the issue at hand.

Displaying it in the context of
a comic book superhero/fantasy/hor-
ror story often adds to the problem.
So it is here. Colon’s depictions of
the atrocities committed by the Nazis
are relatively mild—incredibly tame
when compared to the graphic dis-
embowelling and dismemberment
inflicted by the “good guy.” The
manimal comes off as little more
than a more vicious version of the
Hulk, while the ex-Nazis are pre-
sented in such a way that they resem-
ble a Mafia clan.

This January, Renegade Press plans to
release Ernie Colon’s Manimal, a strip
that originally appeared in the black-
and-white magazine Hot Stuf.’ Explains
Colon, “It’s very incomplete; it was
meant to be an ongoing thing. It looks
like a one-note deal—here’s a guy go-
ing around blowing ex-Nazis’ heads
off—but it was meant to take off from
there, and never got a chance to
because Hot Stuf’ was cancelled.
Since then, I’ve just been sitting on the
pages.
“Manimal is the story of a young man
whose parents were killed in a concen-
tration camp as part of a ‘medical’
experiment—they were injected with
rabies. He was born in the camp, and
became the recipient of mutated genes,
which turn him into a beast when he
gets angry.” Publisher Deni Loubert
wishes to warn readers that the story
content is rather intense, and not for
everyone.

Artist Ernie Colon and Hot
Stuf’ editor Sal Quartuccio have
taken legal action against NBC-
TV, 20th Century-Fox, and
Glen A. Larson productions,
charging that the new NBC
science fantasy series Manimal
features a character used
without permission from Hot
Colon and Quartuccio
sought a temporary restraining
order to halt the debut of
Mammal. This was denied by a
New York Federal judge, and
the series premiered on
September 30 as scheduled. 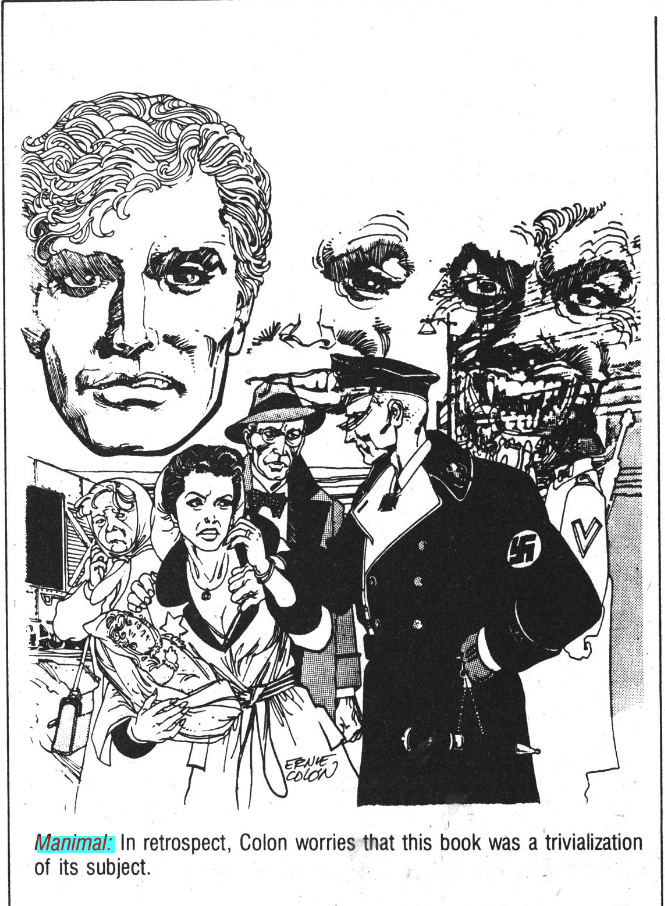 Manimal hasn’t been continued or reprinted since this edition.

There’s not much about it on the interwebs, but there’s this.