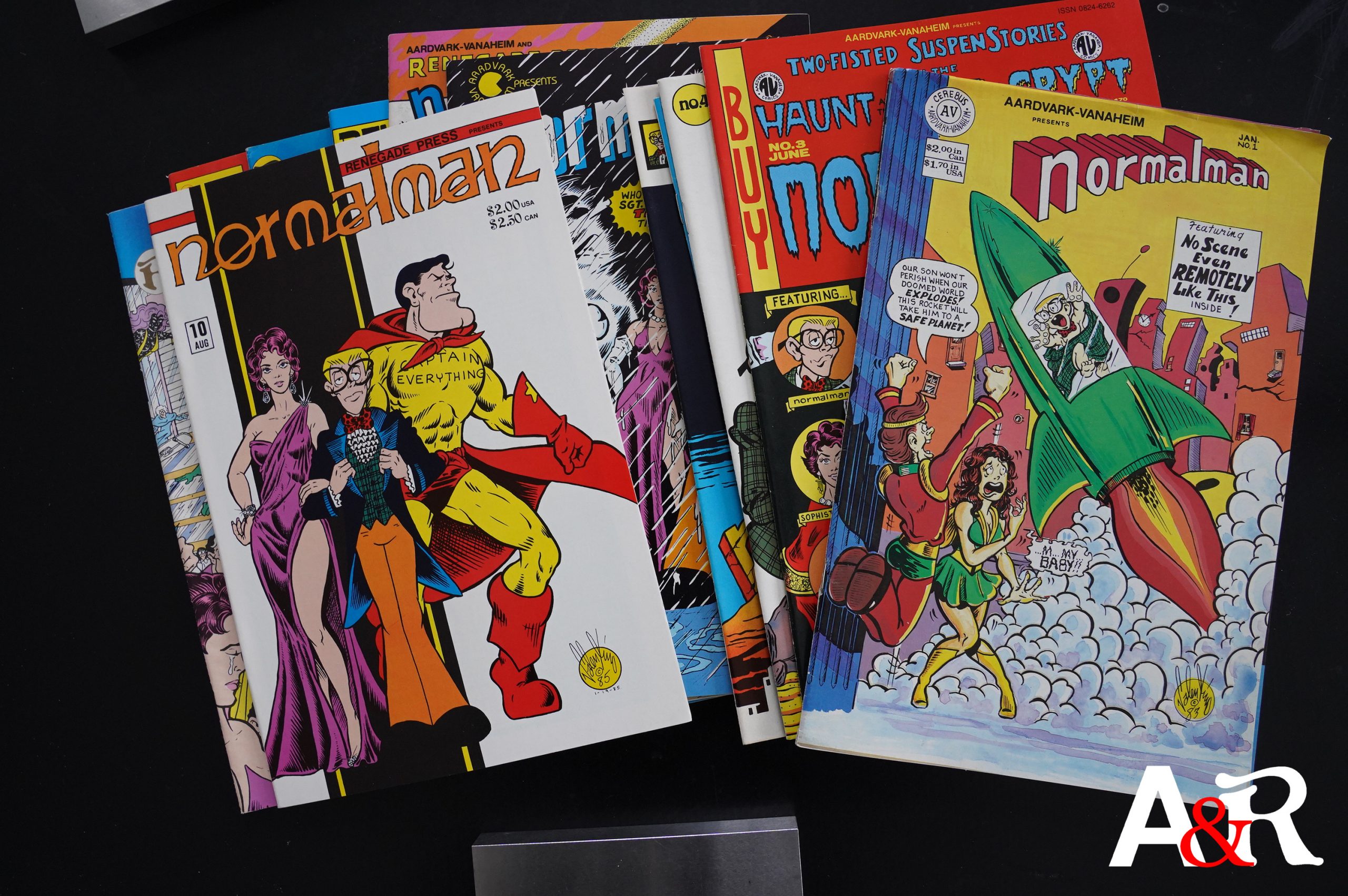 I bought everything that Aardvark-Vanaheim released as a teenager… except normalman. I think I had one issue? And then decided “nuh-uh”.

But teenagers have been wrong before, right? Perhaps this is one of those times? 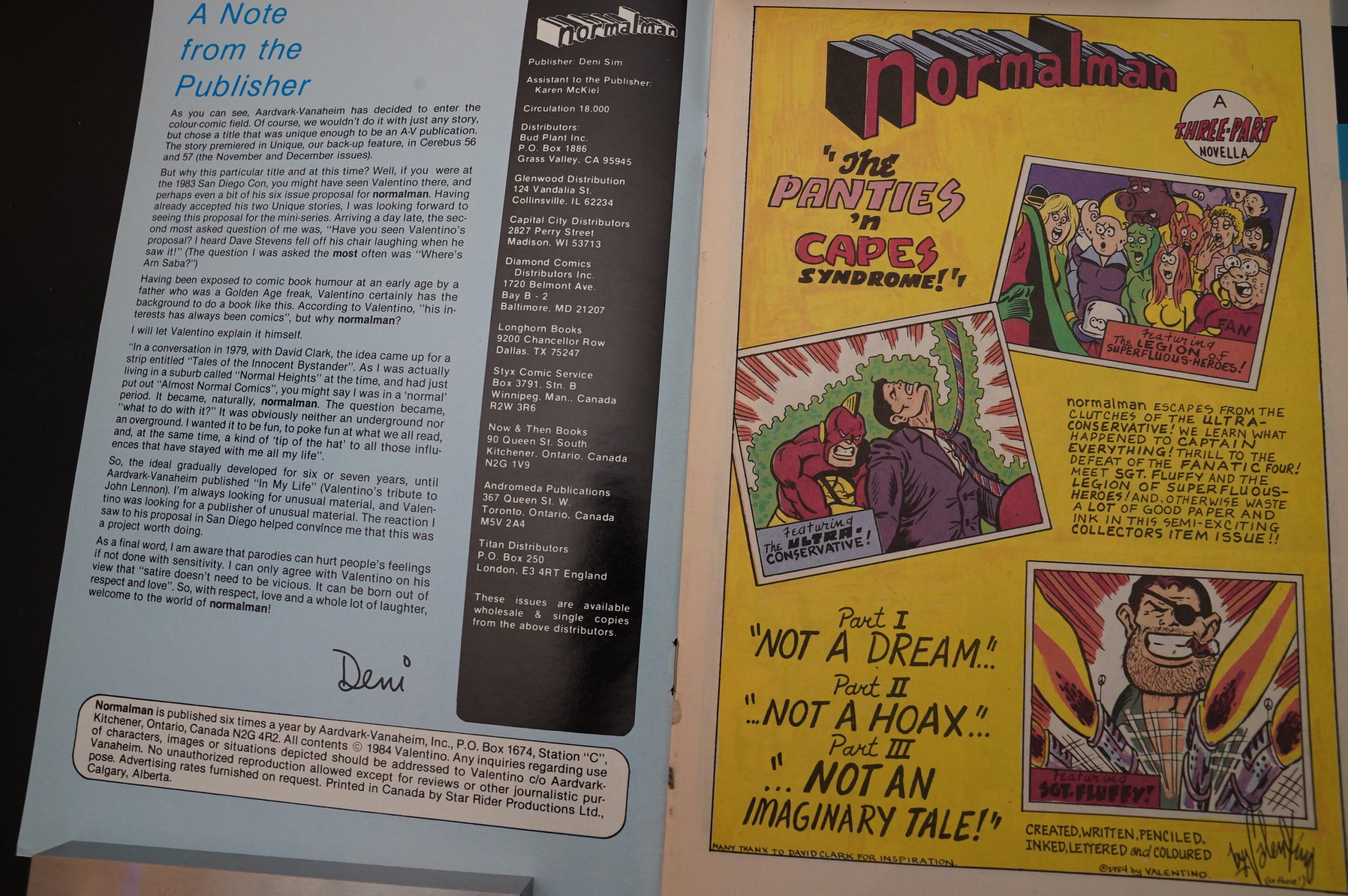 Deni soon-to-be-Loubert-again explains the concept, and then we’re into the story… but… the first issue starts with a recap.

Because the start of the storyline happened in the hinterlands of two issues of Cerebus.

Well, perhaps they thought that nobody other than Cerebus readers would pick this up? Because it’s… probably not the method they recommend in Comics Marketing 101? 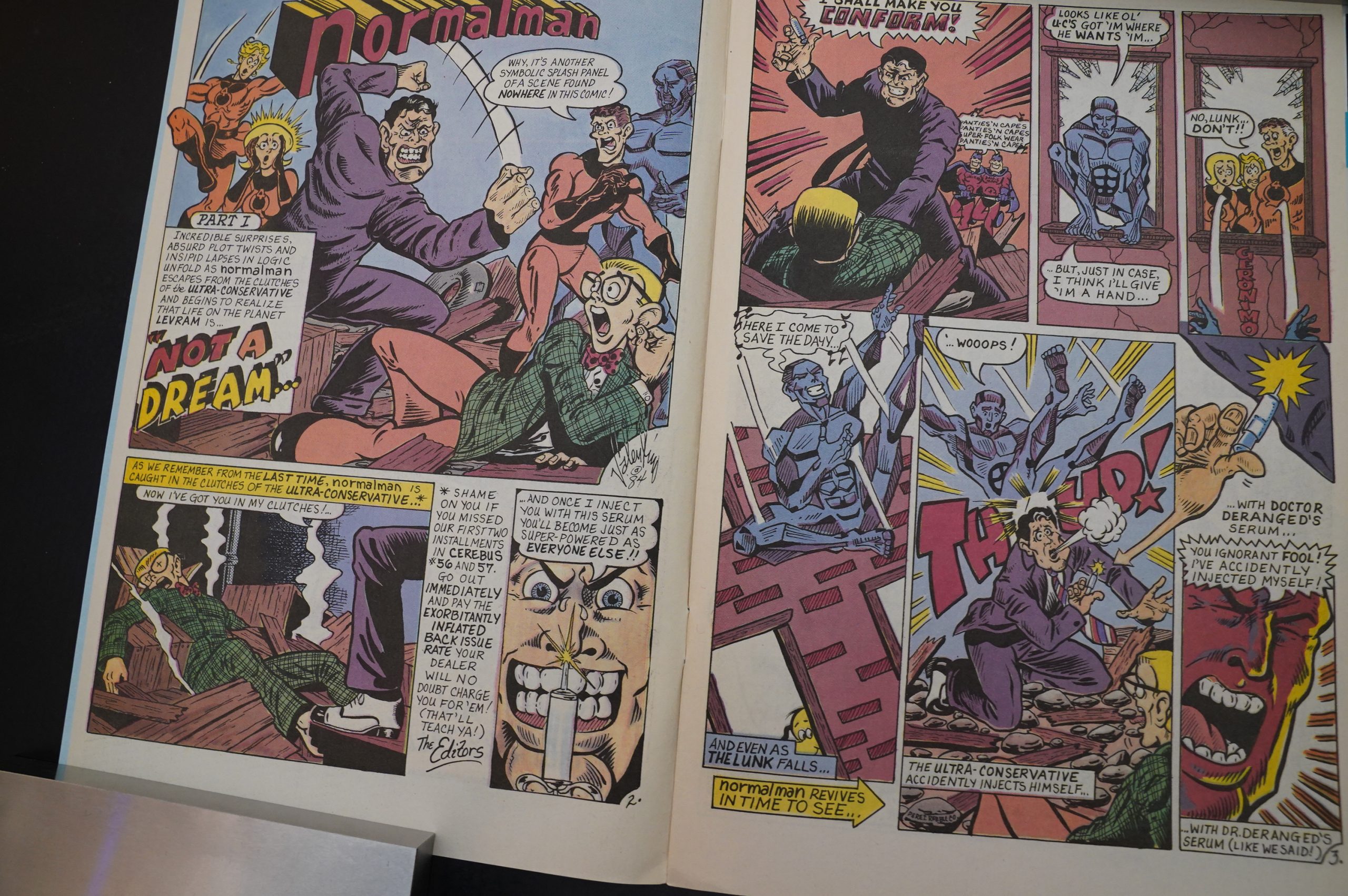 The first issue is a parody of (or riff on) early-60s DC comics, but the most recognisable characters being parodied here are the Fantastic Four from Marvel. And that’s a bit eh? But, whatevs: It’s pretty funny. 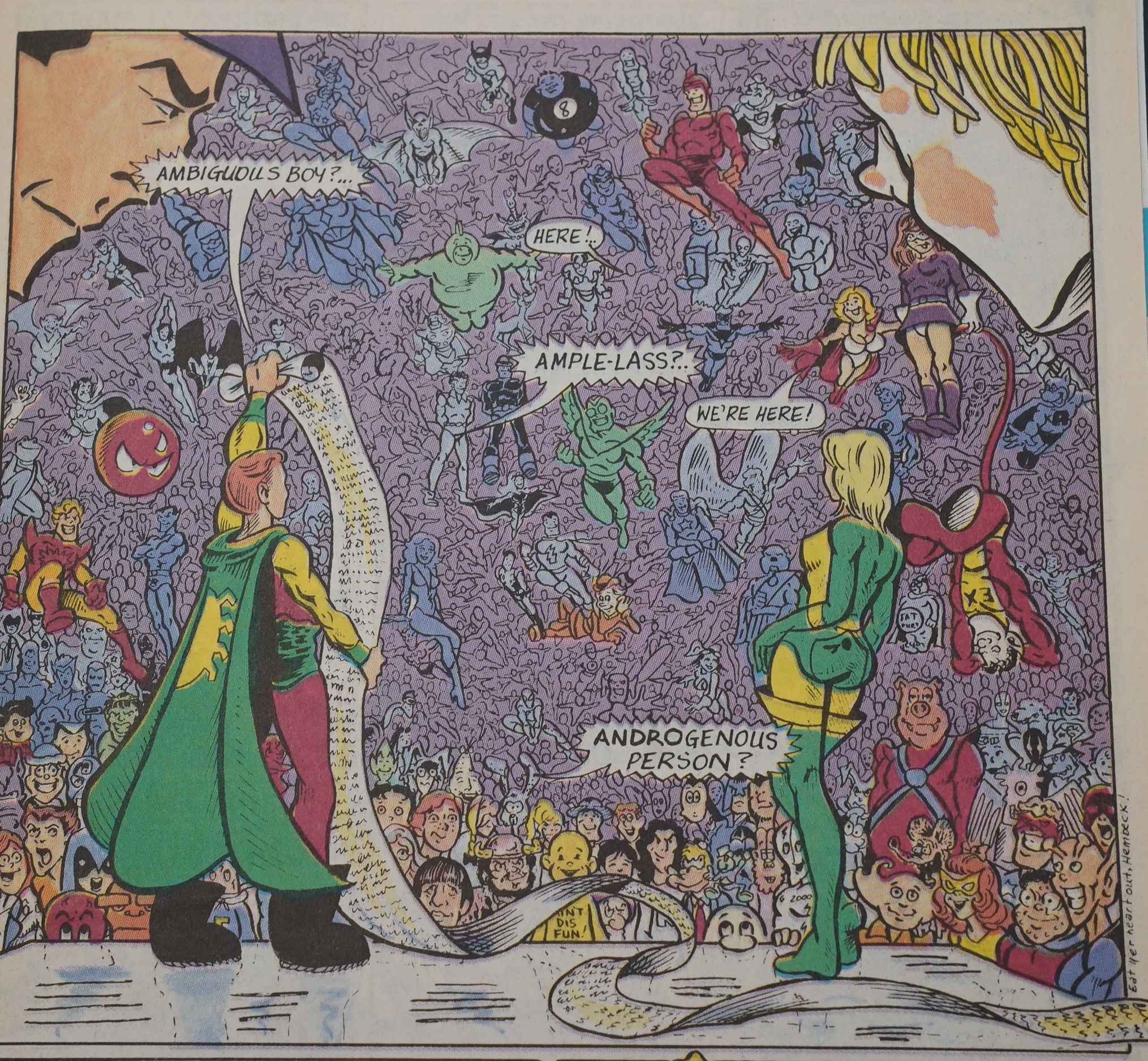 The running joke throughout the first seven issues is The Legion of Super-Heroes, though: You see, they have a lot of members, so doing the roll call takes a lot of time. They start at A and work themselves up to Z eventually.

It’s a good schtick, but I expected it to get funnier and funnier with repetition, and instead… this is as funny as it gets. 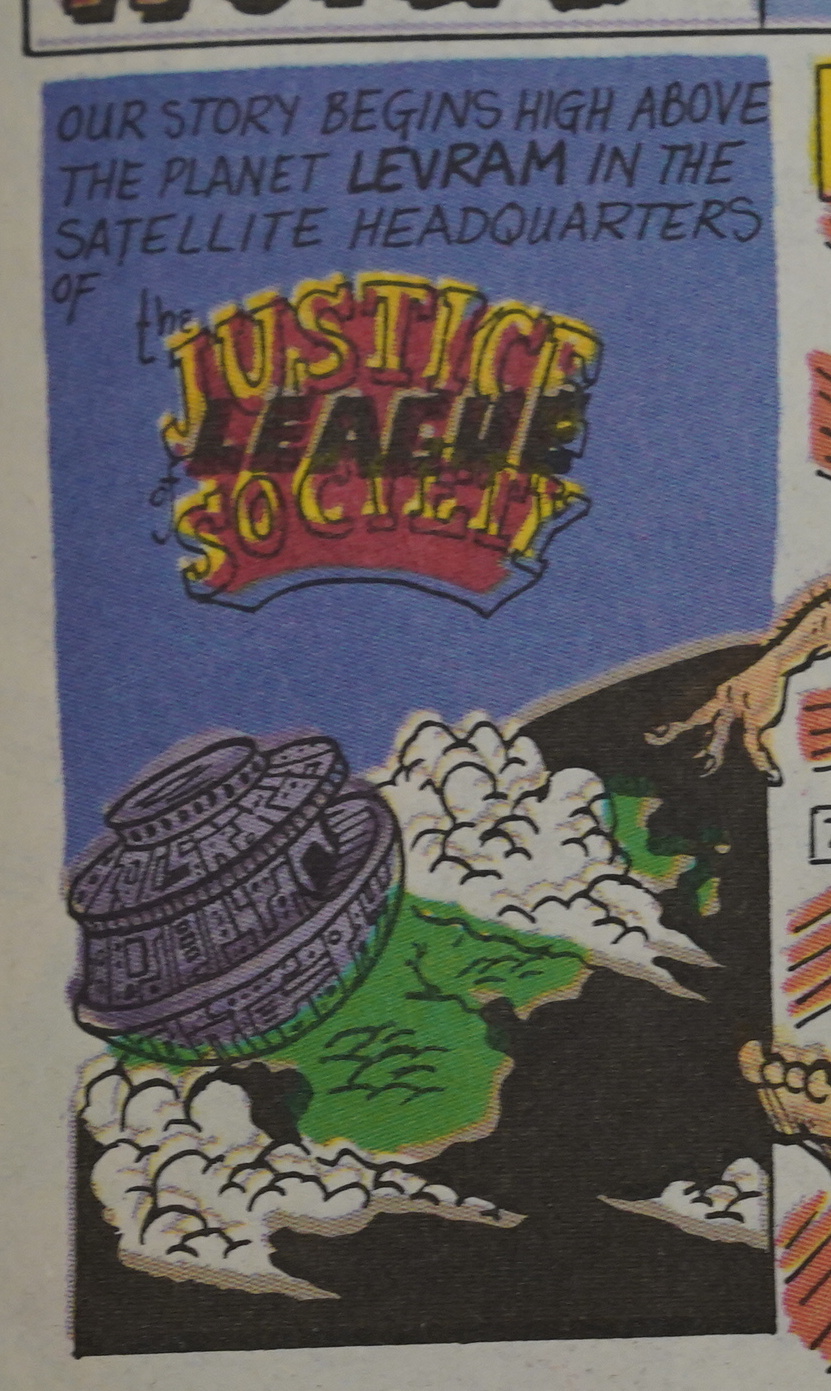 This is the first colour comic Deni has published, and there’s plenty of teething issues. The colouring in the first couple of issues doesn’t look very impressive, and the registering is all over the place. I wondered whether this was also a reference to comics in 1962, but… Probably not? Valentino’s got the format down, with half-page ads and stuff. 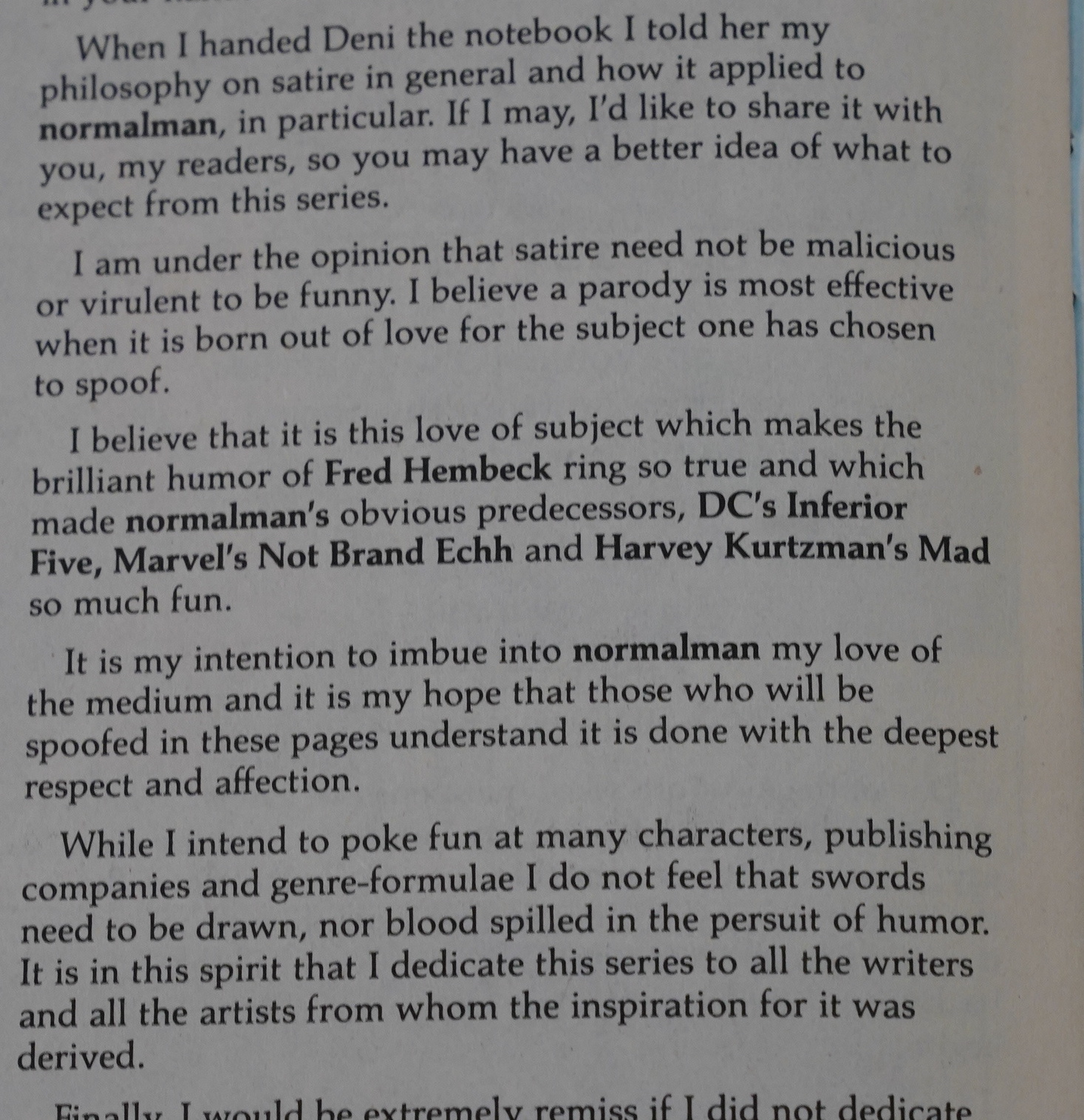 Valentino explains what he’s going for in this series, and I think the first issue was pretty good? I didn’t actually, you know, laugh, but it was plenty amusing. 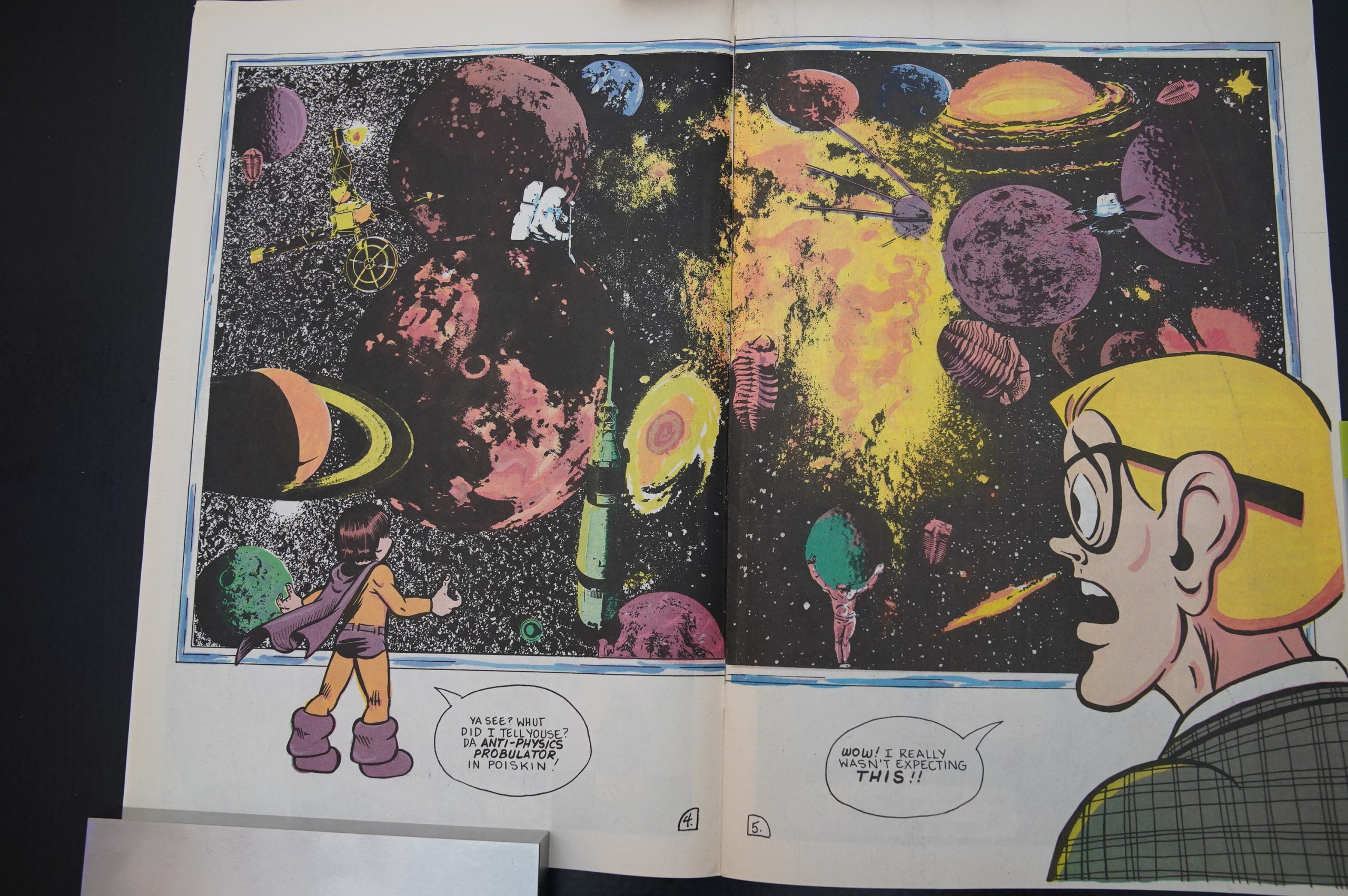 The second issue does Marvel comics, and the method becomes clearer: Valentino’s telling one (presumably) continuous story, and each issue doesn’t so much parody some particular comic book series as use that series as a referential springboard. If that makes sense. So Norm continues his quest to get home… 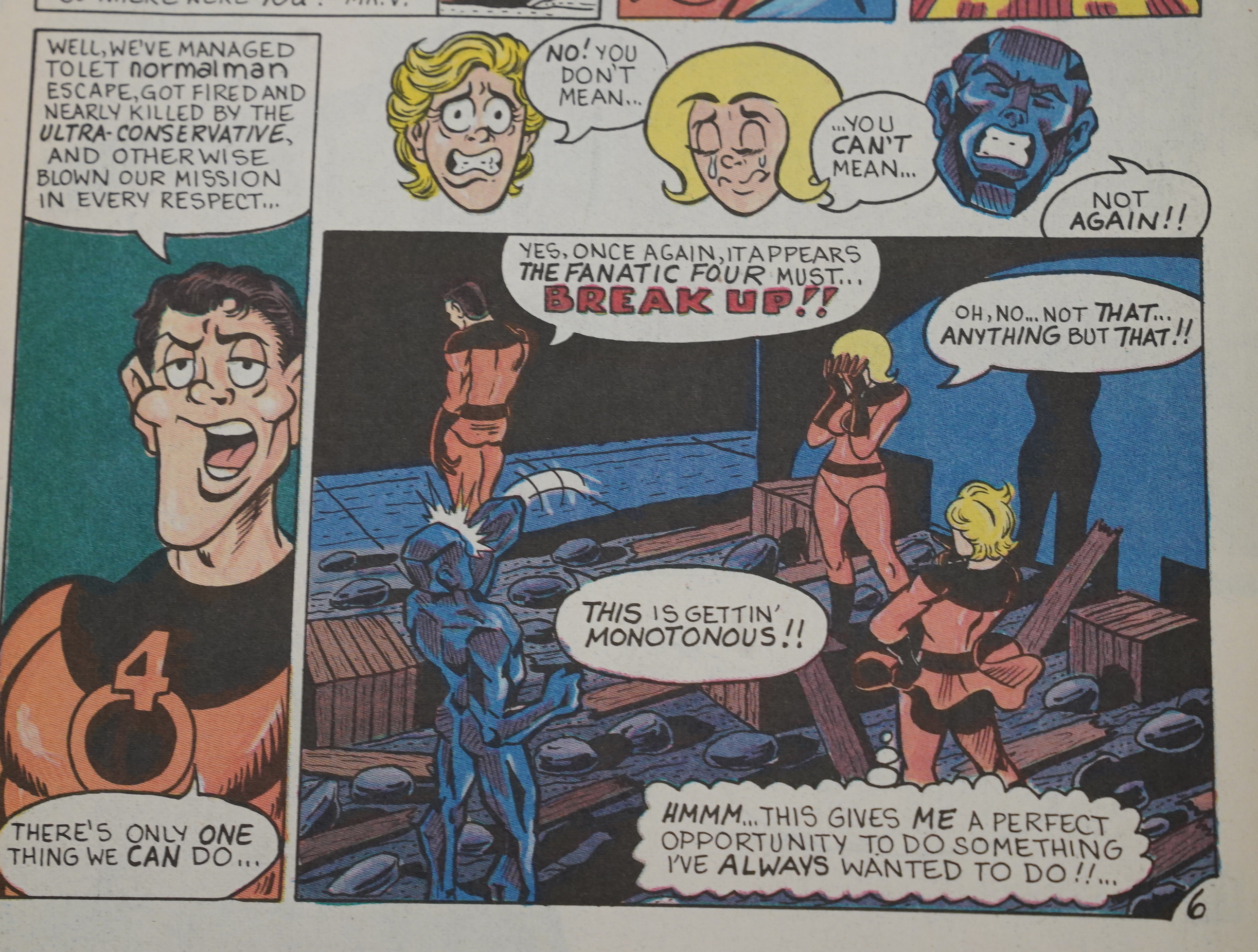 … while the other characters continue, too, but are used to poke fun at the subject at hand. So here’s the Fantastic Four drama, and that’s as far as it goes. This is the only non-normalman comics material in these issues — no backup stories; just 20-22 pages of normalman and then a few letters pages. 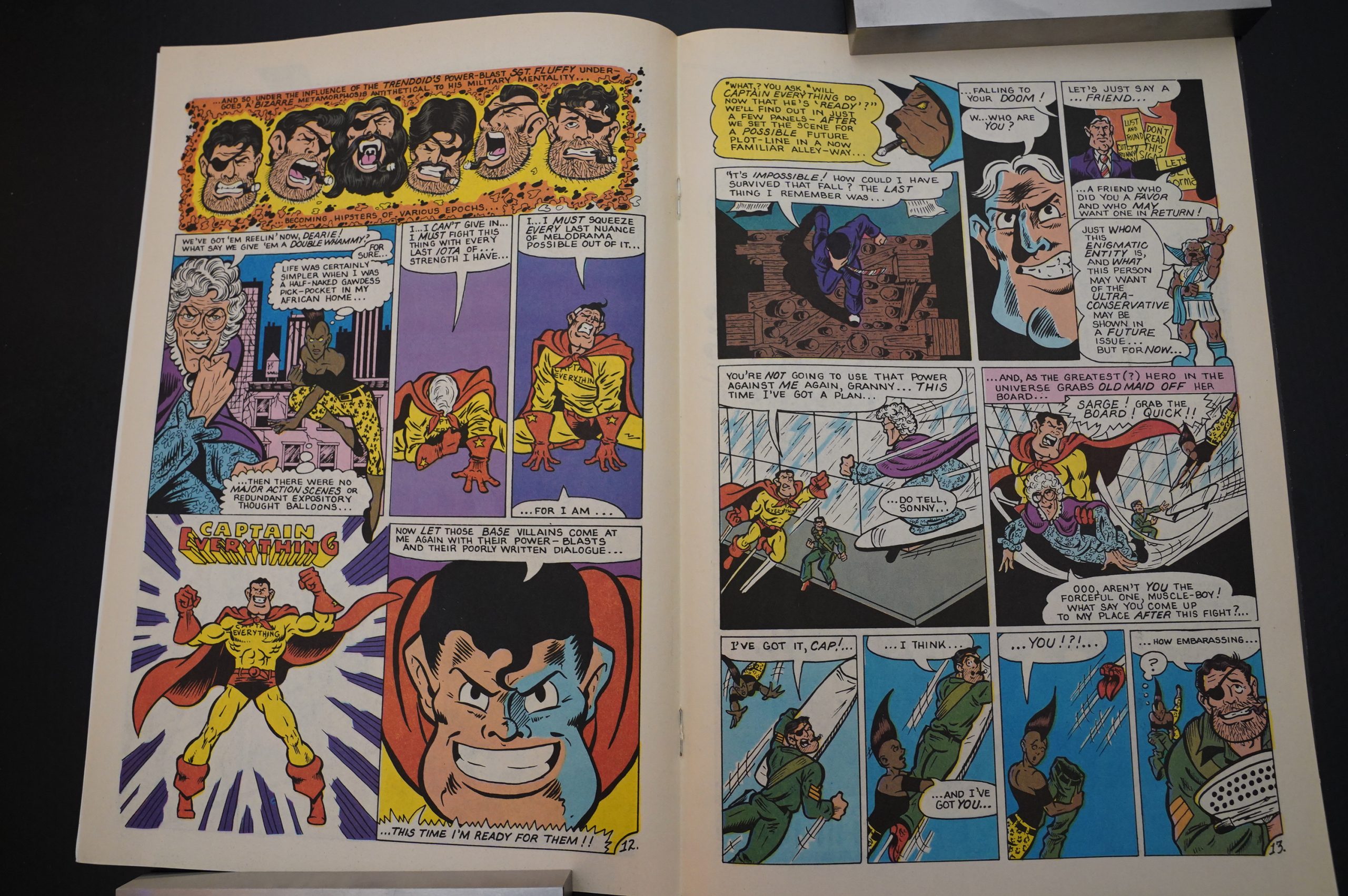 As you can clearly see, this issue is an EC Comics parody. No, it doesn’t make much sense, and things are getting less funny? Elfquest in issue four, which is a pretty direct parody. Oh, yeah, there was a crossover with Journey. And this is the Richie Rich issue, and I’m starting to understand why I ditched this book back in the 80s. The Spirit issue — Valentino takes a few layouts from Will Eisner, but his art chops aren’t really up to the task. And now things are becoming rather perfunctory: This is the DNAgents issue, and I’m wondering whether Valentino had even read DNAgents. DNAgents are referred to in, I think, three panels, and this is the largest one.

The rest of the issue is concerned with some inane plot about … the president of Levram … or something. To be honest, it’s was so tedious that it’s hard to pay attention. Wolverine McAlistair visits from Journey in an issue that I think is taking its references from Star Wars? So this is a riff on Asterix. Yes I know. 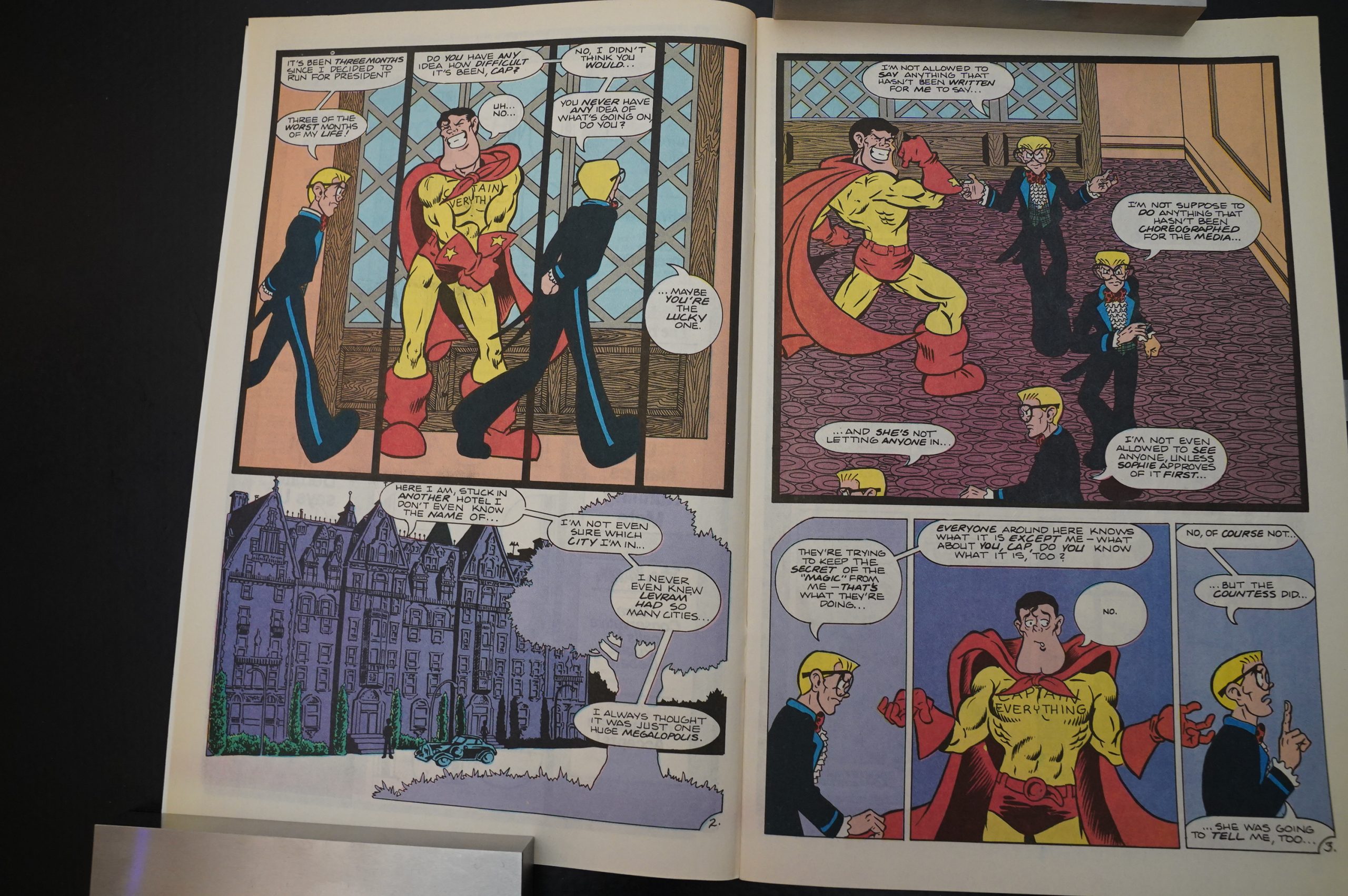 Finally! An issue that doesn’t seem like it’s tossed off while Valentino was thinking about something else. It’s still not actually funny, but Valentino references Cerebus extensively in the layouts… 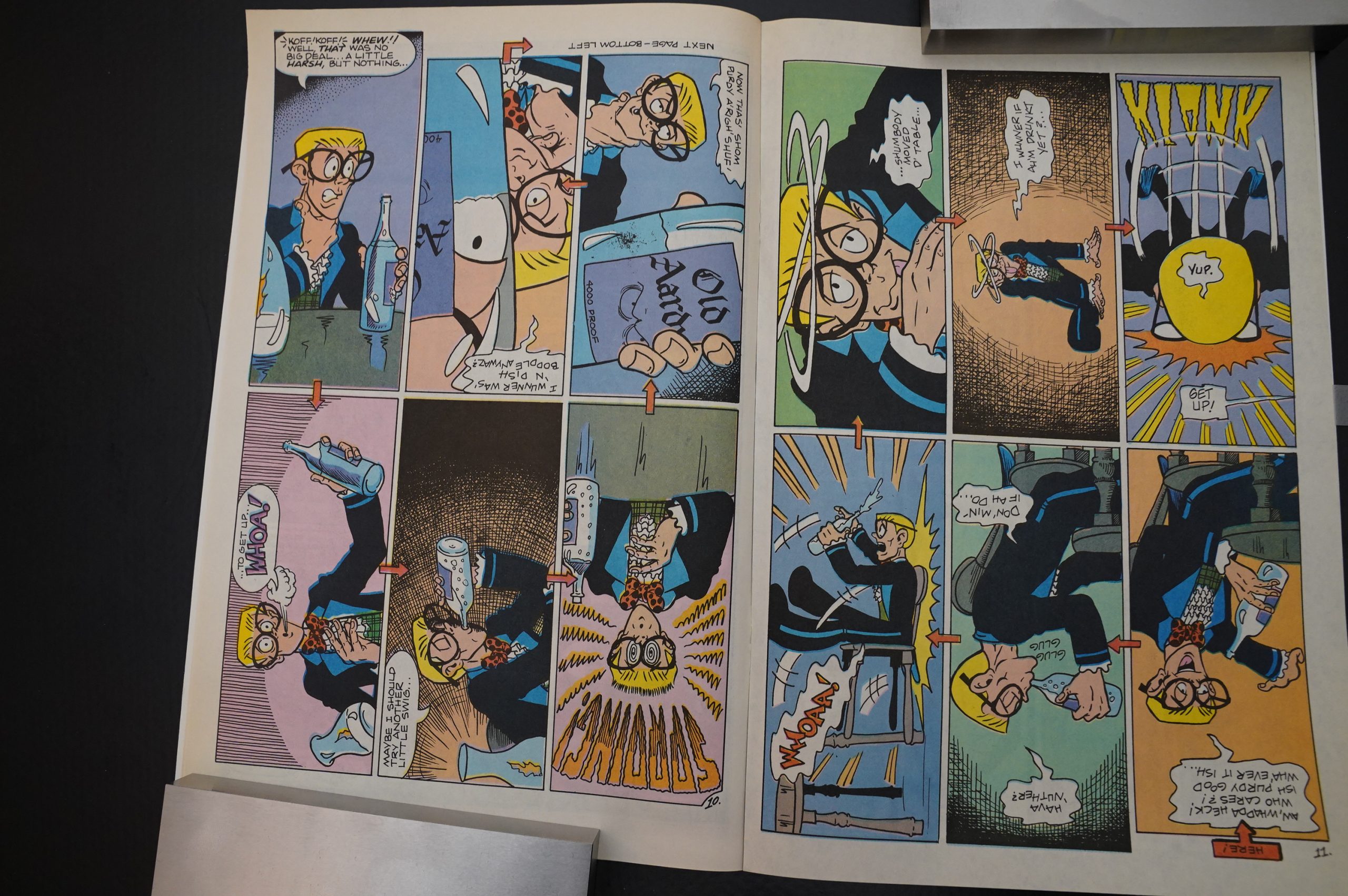 And the backgrounds (or the lack thereof).

It’s at least something. 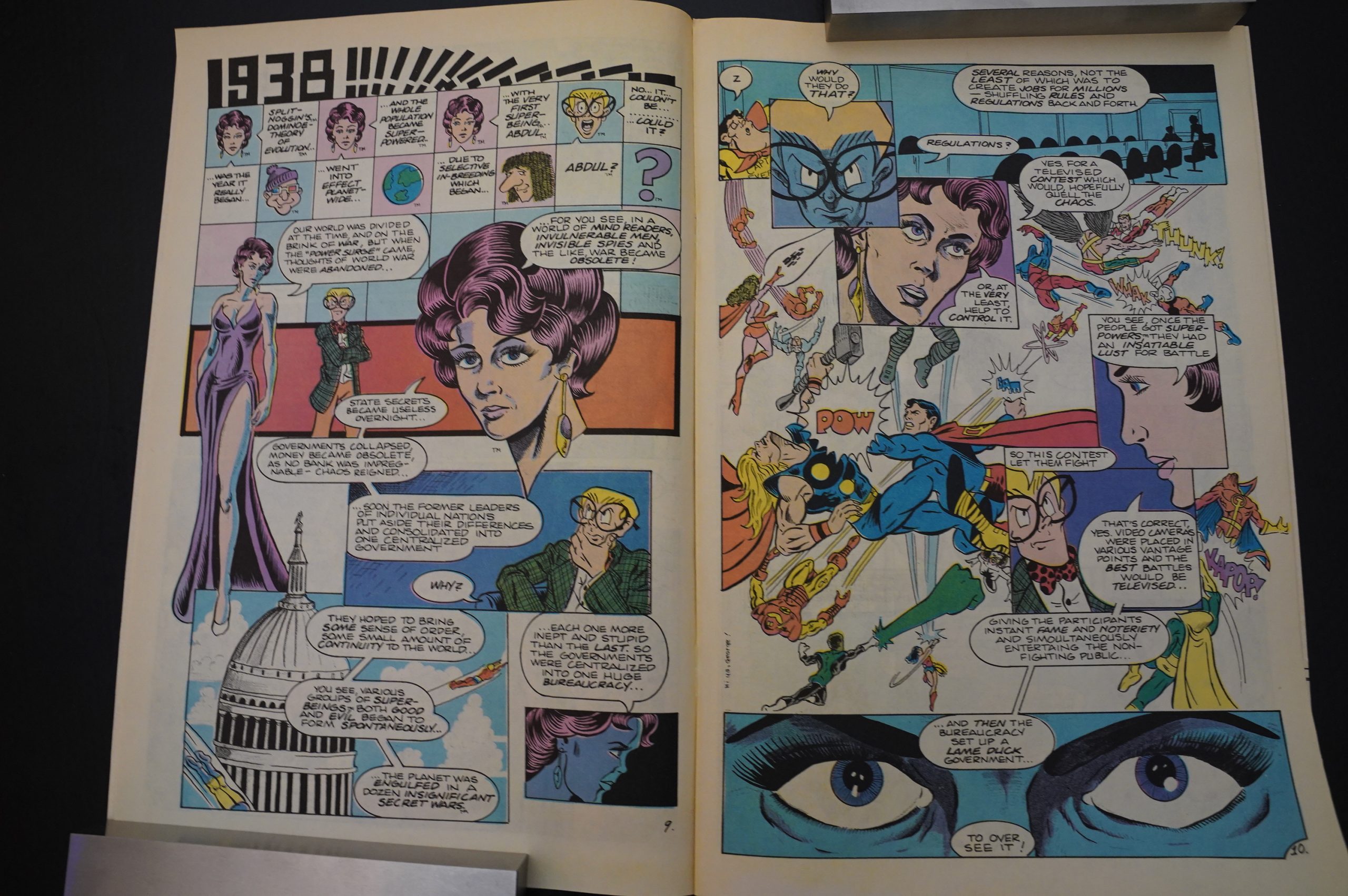 The American Flagg issue features a lot of layouts that I think are meant to look like Howard Chaykin layouts? They don’t? And… this is Archie? I think his glasses grew. 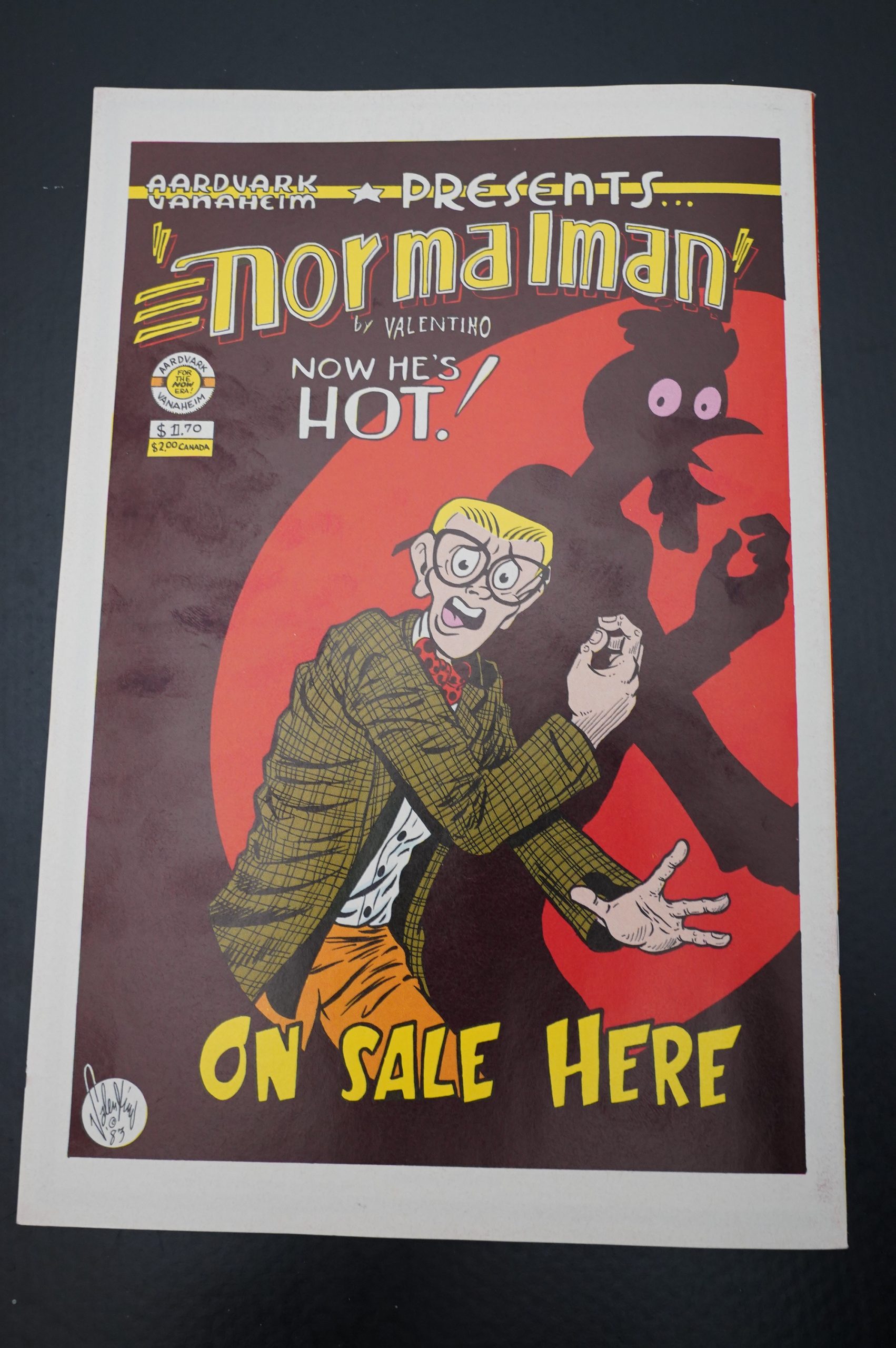 Unused cover? Valentino talked about doing a special issue that collects the start of the normalman story (from Cerebus) and others bits and bobs…

Or perhaps a poster? And then we get the 3D Annual, which is the final issue and wraps up the storyline… in a better way than I saw coming… so at least it goes out on a high point.

And the 3D is great! I know you’ll have to take my word for it, but every panel is obviously made with 3D in mind, and objects really pop. It’s very “ooh ahh yes”. Probably the best 3D comic I’ve seen? There’s even a 3D picture of Valentino and Deni Loubert, and even that looks amazing.

I wish I had more to say about normalman, but I found it to be something of a let-down, and I’m not even inspired to quibble with the annoying bits, because I can’t work up the enthusiasm to even care.

If you’re a regular reader, you
know I’m not a big fan of humor
comics. Most of them aren’t very
funny. They often bore me to
distraction. However, Deni Sim
was nice enough to send me a
copy of normalman #1, so I
figured the least I could do was
read it with an open, objective
mind—before slashing it to rib-
bons.
Well, I actually, honest-to-
Irving-Forbush liked the thing!
The book was a paper time-
machine that transported me
back to the days of my child-
hood. Anyone whos is familiar
with the Marvel and DC comics
of the 1960s will experience a
similar feeling, I’m sure.

As issue#4 ended, normalman
found himself on yet another parallel
world: Earth Dismal. Unfortunately,
that is a fairly accurate description
of the story contained therein.
“In #5, I think I tried for too
much, I think it was too diffused
as a result. I wanted to do Mickey
Mouse and Richie Rich and Un-
cle Scrooge and also Ronald
Reagan—and I wanted to do it all
together in one book.”

“The parodies in several of the
last six issueswere the strongest
parodies. The Cerebus issue (#10)
is extremely Cerebus—l think it’s
probably the best parody of the
bunch, personally. It’s probably
my favorite book in the series.”

One of the more. noticeable
changes in the series was that Valen-
tino was no longer relying so heavi-
ly on Marvel and DC for his sources
of parcxly. Indeed, parody as a whole
was beginning to take a back seat to
the unfolding story of normalman’s
dilemma. This move definitely
strengthened the book. From this
point onwa/d, the reader was not so
interested in spotting the various in-
jokes as he Or she was insimply
following the ongoing drama.

Valentino’s progress with normalman
may prove illuminating. Except for the col-
oring, it’s the pgoduct Ofa single sensibility,
and whgn I spoke. with Valentino about
the problems of sustaining the epic-length
nonnalman narrative over the span of 12
issues, he acknowledged that the transition
from working in the short 8- and 16-page
minis to full-length comics was a compli-
cated and difficult challenge for him. He
makes no bones about the fact that normal-
man is a more “commercial” concept than
his newave work because, as he will tell
you, he’s determined to make a go of it in
the competitive world of contemporary
comics. A few newave artists with whom I
spoke expressed ambivalence about Valen-
tino’s newfound “success” with normalman;
for his part, Valentino enjoys writing and
drawing normalman and sees it as move
away from ‘ ‘a lucrative career in floor
sweeping” toward establishing himself a
presence in the comics industry. (He hopes
to pursue plans to see some of his earlier,
more “personal” work published in a
standard-size comic book collection.) vlt’s
fitting that in the second issue of normal-
man, Valentino paid homage to his newave
roots by plugging Clay Geerdes’s Comix
World and Brad Foster’s Jabberwocky
Graphics.

Image Comics published a collected edition of normalman in 2007.

This device is rather inconsistent, as sometimes mid-chapter, Valentino seems to forget who he is trying to channel, but when it works, it can be quite funny.

Valentino’s ability to draw in another artists’ style is exceeded by his own cartooning skills. He draws lively characters leaping and zooming through the panels. They’re full of energy even when they’re standing still. His style comes through even when channeling another artist. Valentino is an excellent parody comics artist. I wish he’d continued making humor comics instead of launching ‘Shadowhawk’. In all honestly, these comics are better. Better drawn and better written.

The next post in this blog series is about Ms. Tree, and that’s quite a few issues to read, the next post may not happen until… er… this weekend? Who knows?