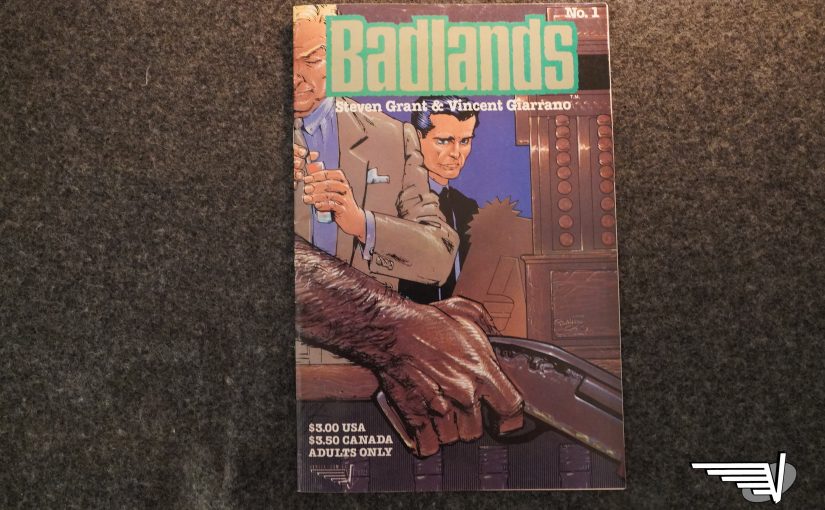 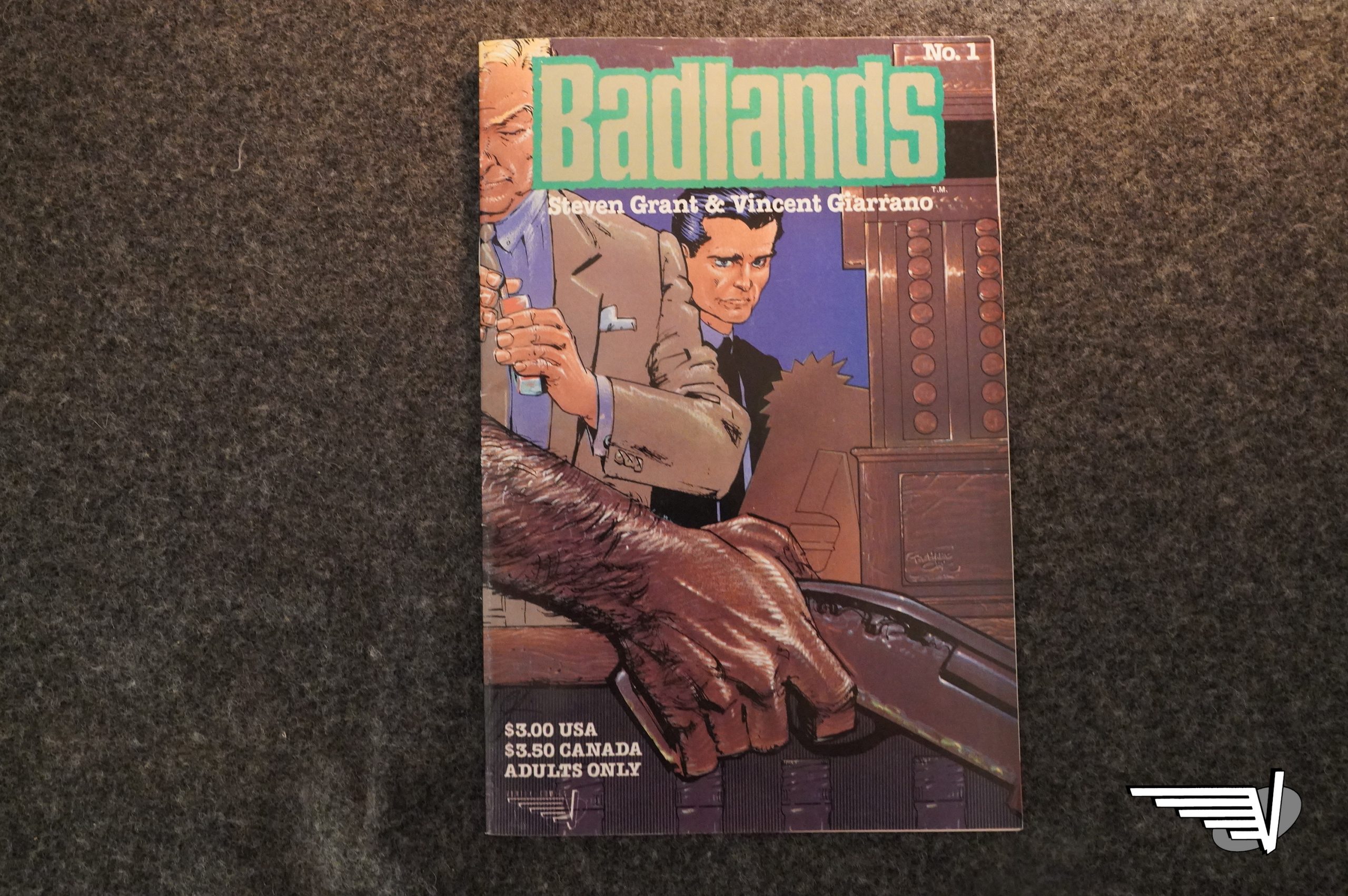 Badlands (1990) #1
by Steven Grant, Vincent Giarrano and others

So this is the second ambitious series Vortex launched early in 1990, and like Doc Chaos, it’s also 32-page (well, 28-page), has shiny paper, colour, and lasted one issue. 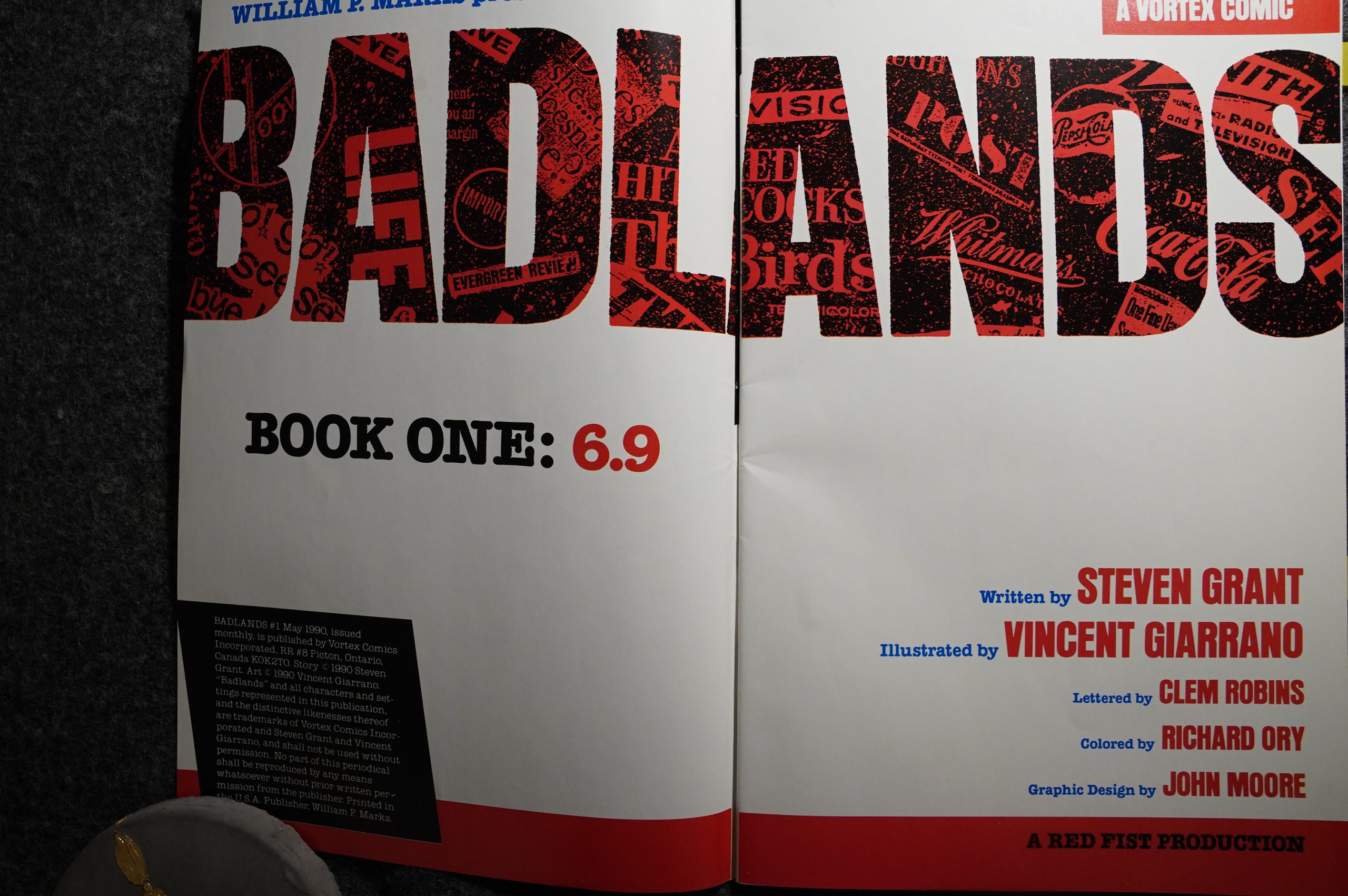 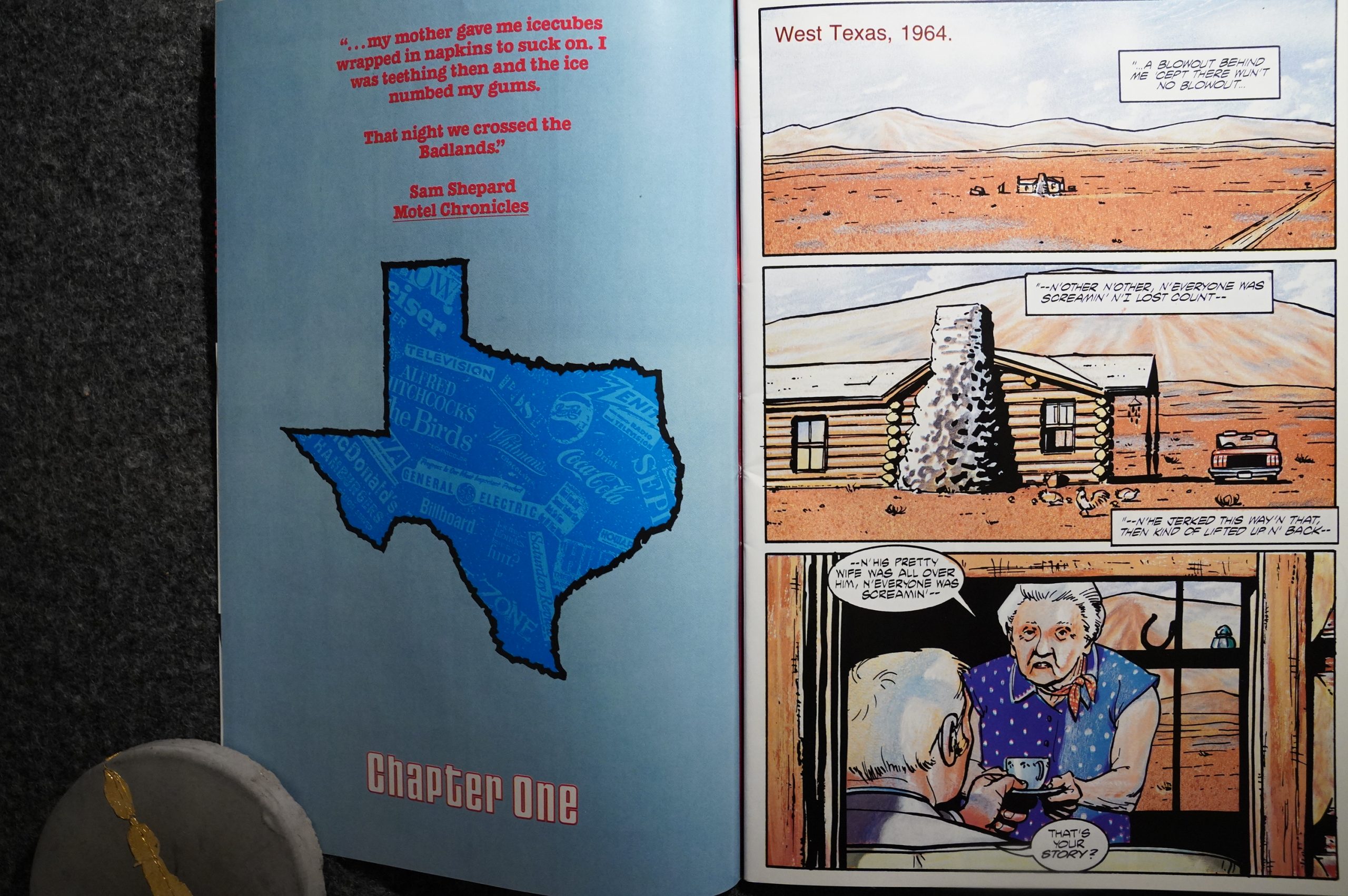 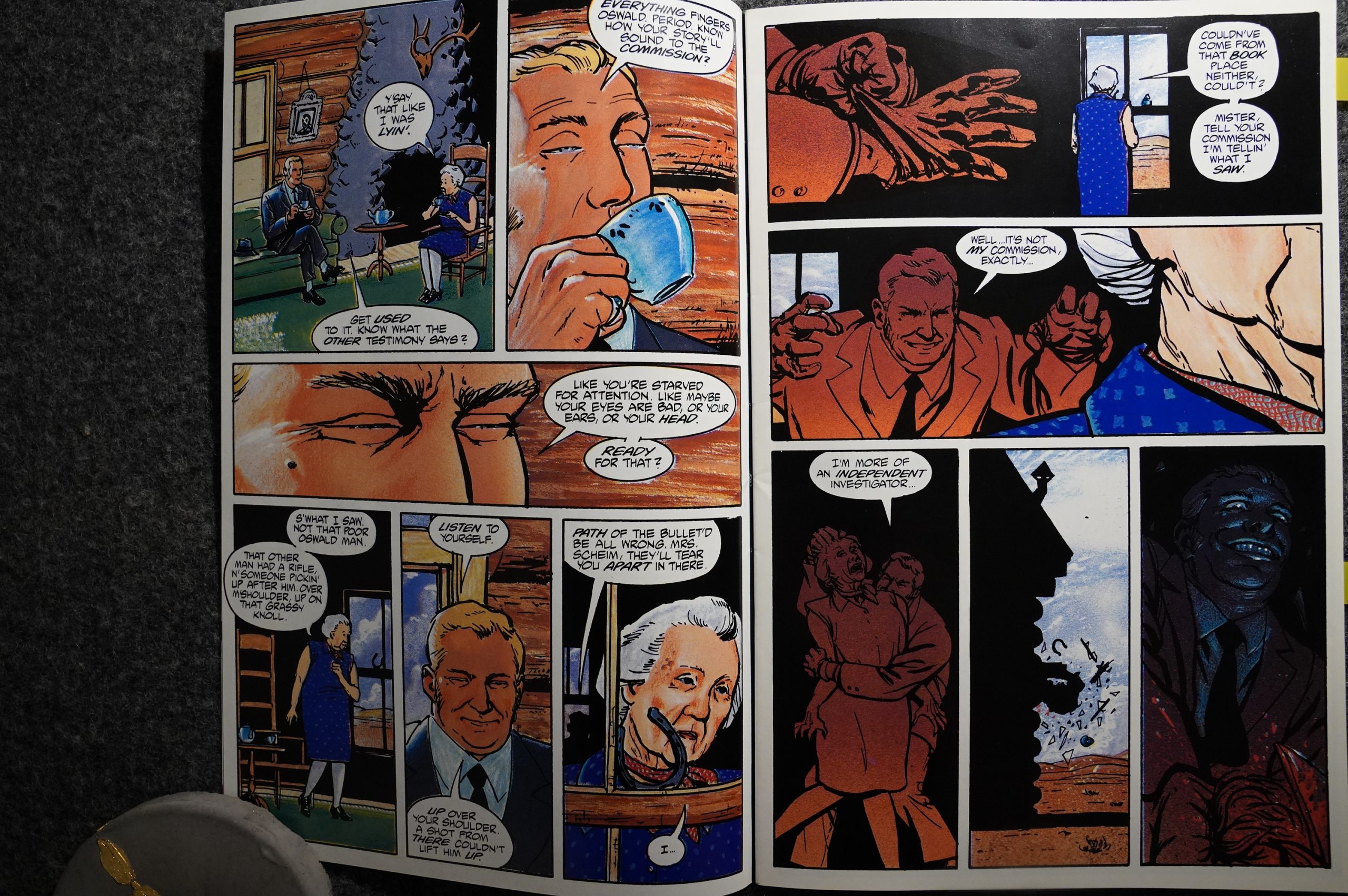 So we have a psychotic hired killer, Kennedy, Texas… Pretty standard stuff. Giarrano’s artwork is attractive, but not particularly interesting. The demonic look on the psycho in the final panel is pretty special, though. 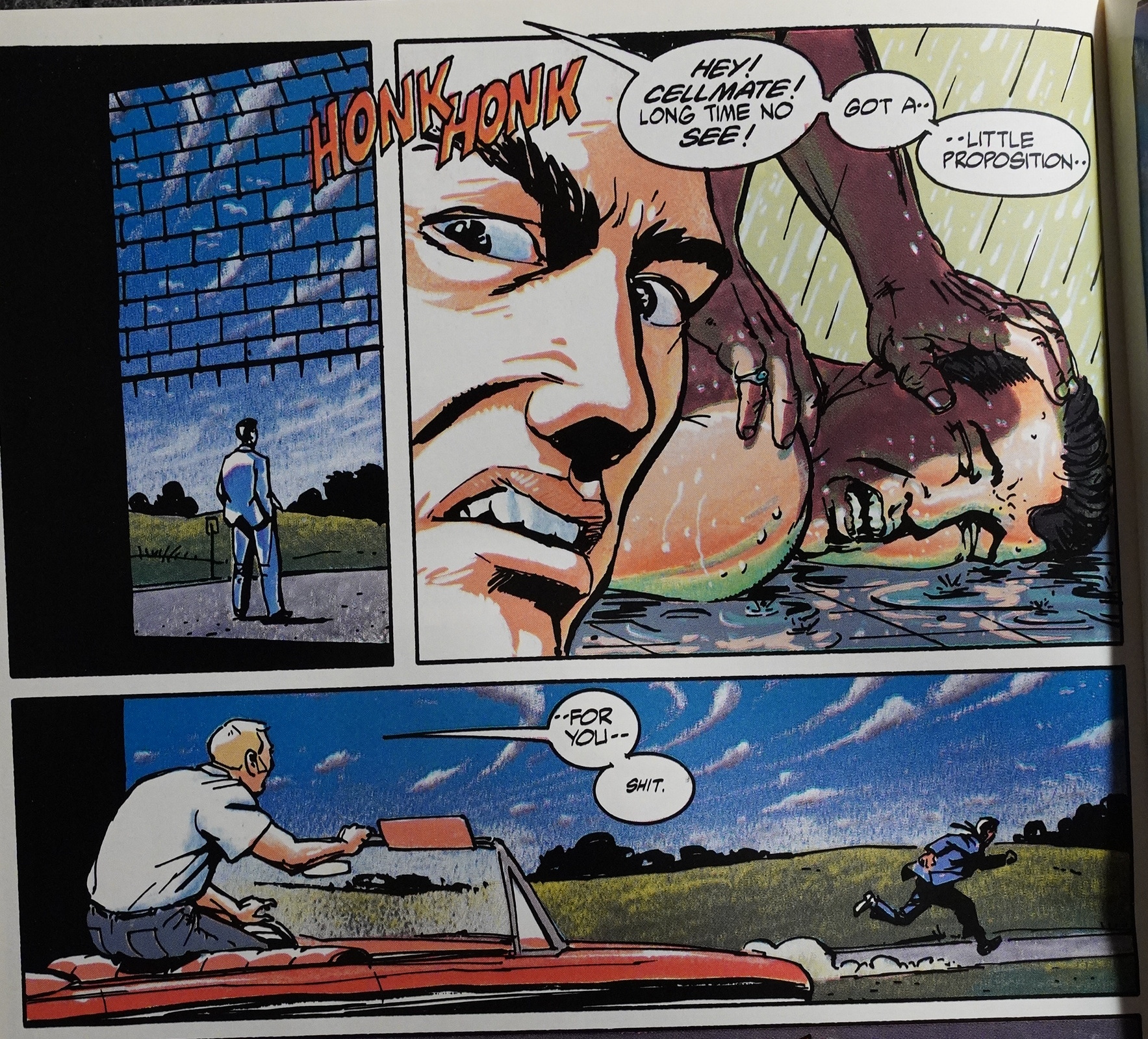 It turns out that the psycho used to rape this guy in jail, too, and the rest of the issue is basically the psycho pressuring this guy into a life of crime, going as far as paying off half the town not to hire him. The question is, of course… does this makes sense? I mean, either dramatically or … any other way? Of course not, which makes this all rather…

My left eyebrow was raised throughout reading this. It’s a puzzling comic. Is it just ineptly written or is it going somewhere? 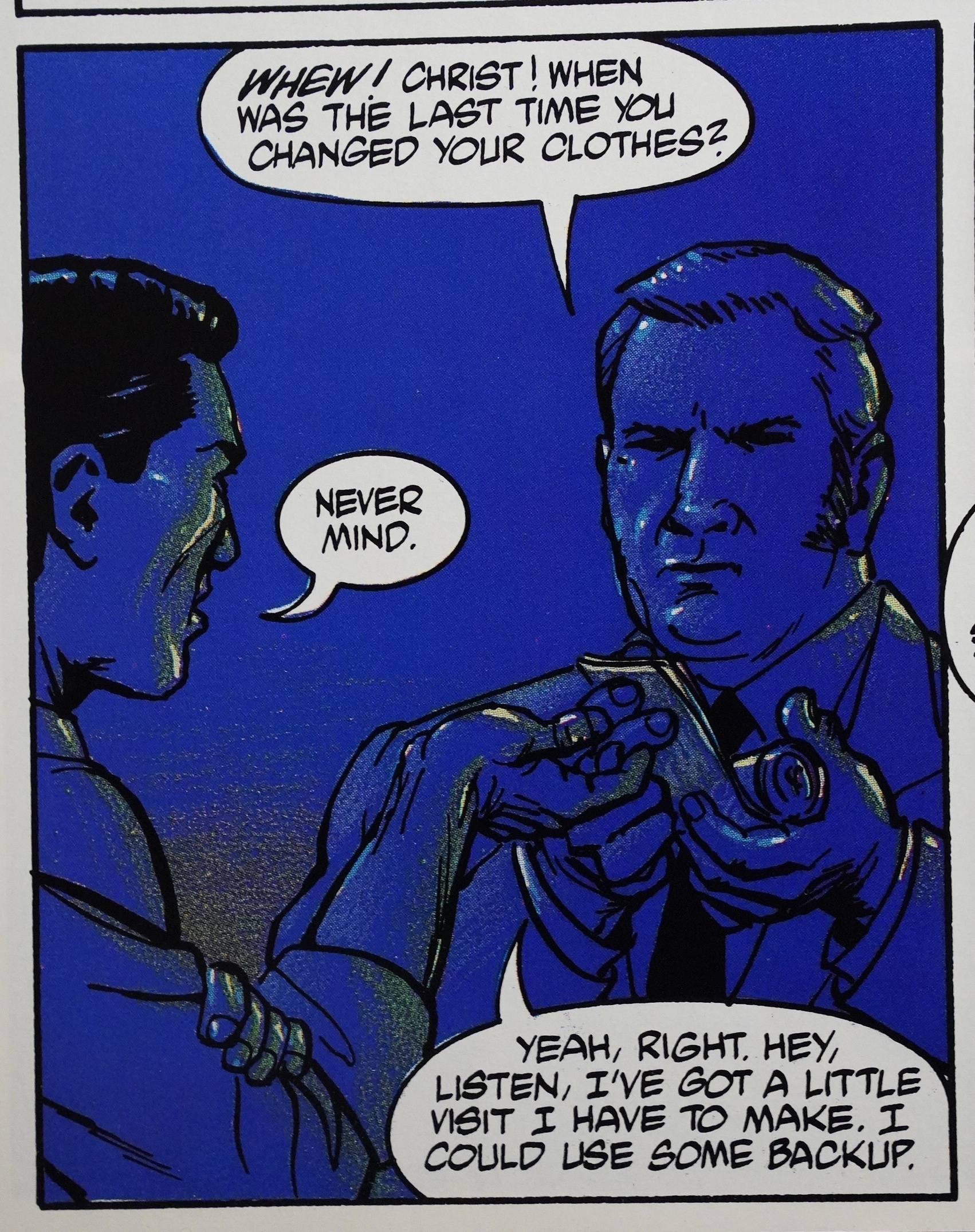 The only this that this book has going for it is really the colouring by Richard Ory. He uses colours in a striking way, and he seems to be doing the highlights by scribbling over the colours with whiteout or light-coloured er… crayons? I’m not an artist! Get off my back! 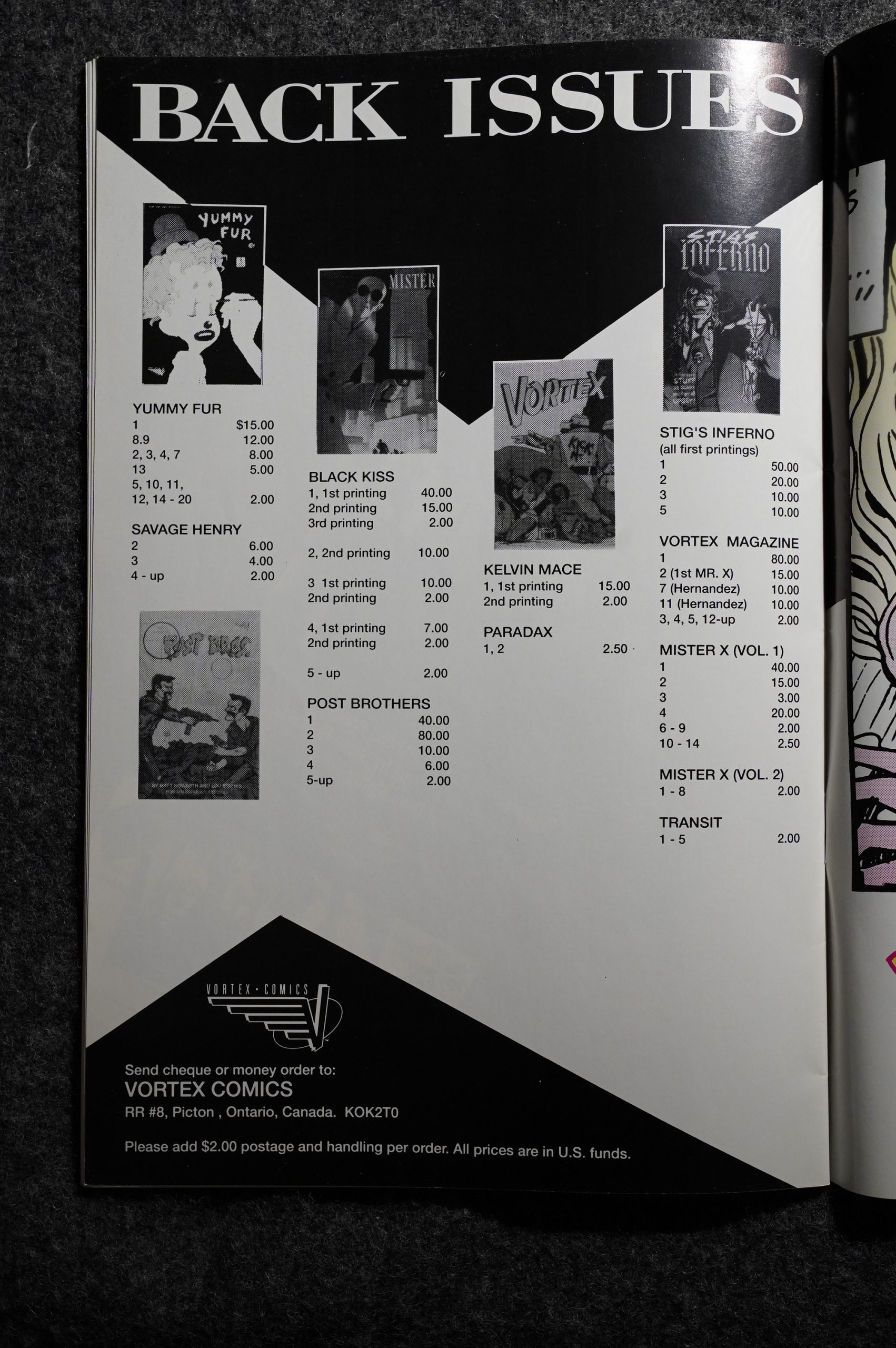 Heh… Those prices are … odd? $80 for the second issue of Post Bros?

I guess that wouldn’t have been a solid investment.

Badlands seems fine, but it’s a pretty weird book for Vortex to be publishing. I mean, it’s so… normal? There’s nothing really that makes it stand out in any way, and Vortex did have an eye for the unusual.

This is something completely different: a real
crime comic, in the sense that it deals with
criminals, not merely a mystery or an
espionage thriller. Badlands is about the real
assassin of John E Kennedy. Theretare no
spandex costumes, no hard-boiled detec-
tives, and whodunnit is clearly and carefully
explained. This is about criminals, and is set
in 1963.
It seems that all those theories are right:
Oswald didn’t kill J.F.K. Of course, he wasn’t
originally going to be the guy who took the
fall, eithet In fact, he warrants only a cameo
appearance in Badlands.
Steven Grant says that this book is in the
same sort of spiritual milieu as Jim Thomr
son. Basically, the book is about a young
Chicano car thief who manages to get
himself manipulated into performing the
assassination of the president. His name is
Conrad Bremer. The book involves actual
aspects of the alleged conspiracy to kill
Kennedy. Grant did a lot of research on the E
subject so as to be as accurate as humanly
possible.
Although the book deals with a complex
subject and will be nearly as convoluted as
all the J.F.K. conspiracy theories, Grant notes
that the book will still be easier to follow than
Whisper, his acclaimed non-ninja series for
First.
The book contains a lot of what Grant calls
his own “holy triumvirate”—sex, violence,
and politics.
Publisher Bill Marks notes that the book
has been scheduled for a slick paper format
to make full use of colorist Richard Orry’s
palette.

Heh. There’s an appearance in one of Amazing Heroes’ swimsuit issues: 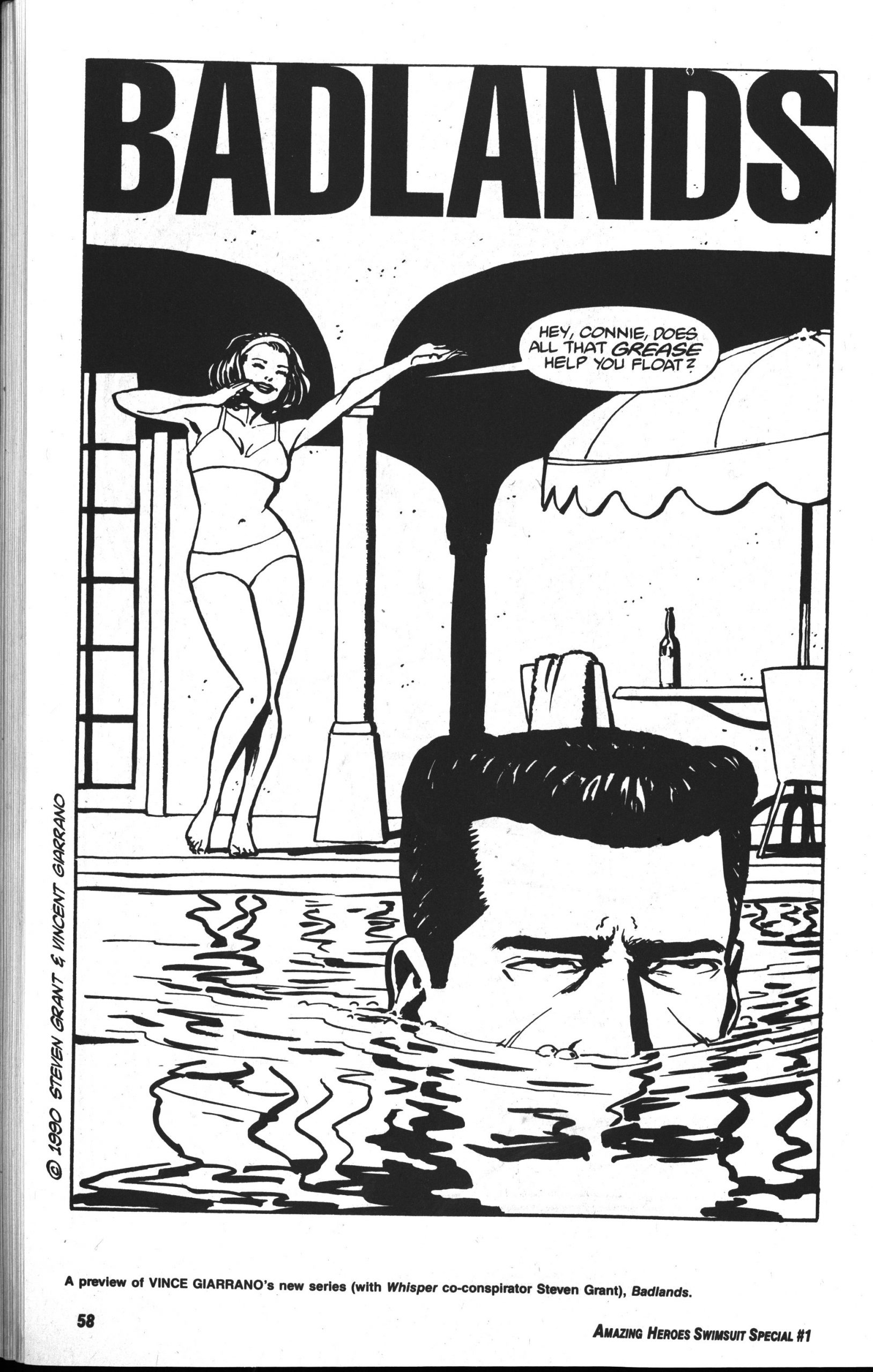 In the grand tradition of crime fiction, it features a main character who can’t seem to make a good decision, along with corrupt oil men, a nymphomaniac daughter, and a scary, scary hired killer. The really scary part, of course, is just how plausible it all seems.

Steven has written an in-depth and compelling crime comic here, one that will sink its hooks into people right away and hold them throughout the story.