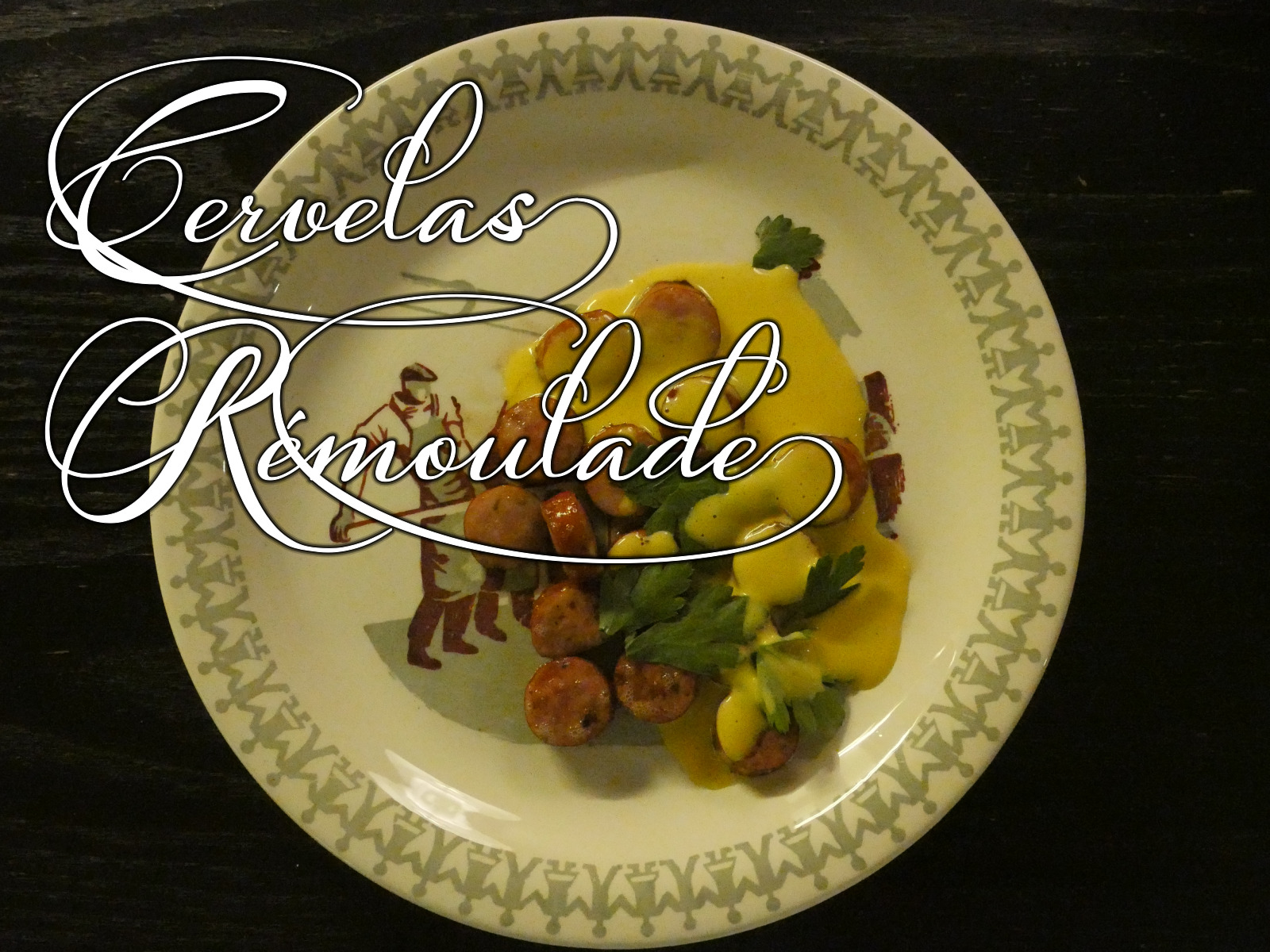 Busyness never ends, so I’ve had no time to read anything… which means that I can’t cook anything either. It’s this whole concept.

Finally, time for some food. 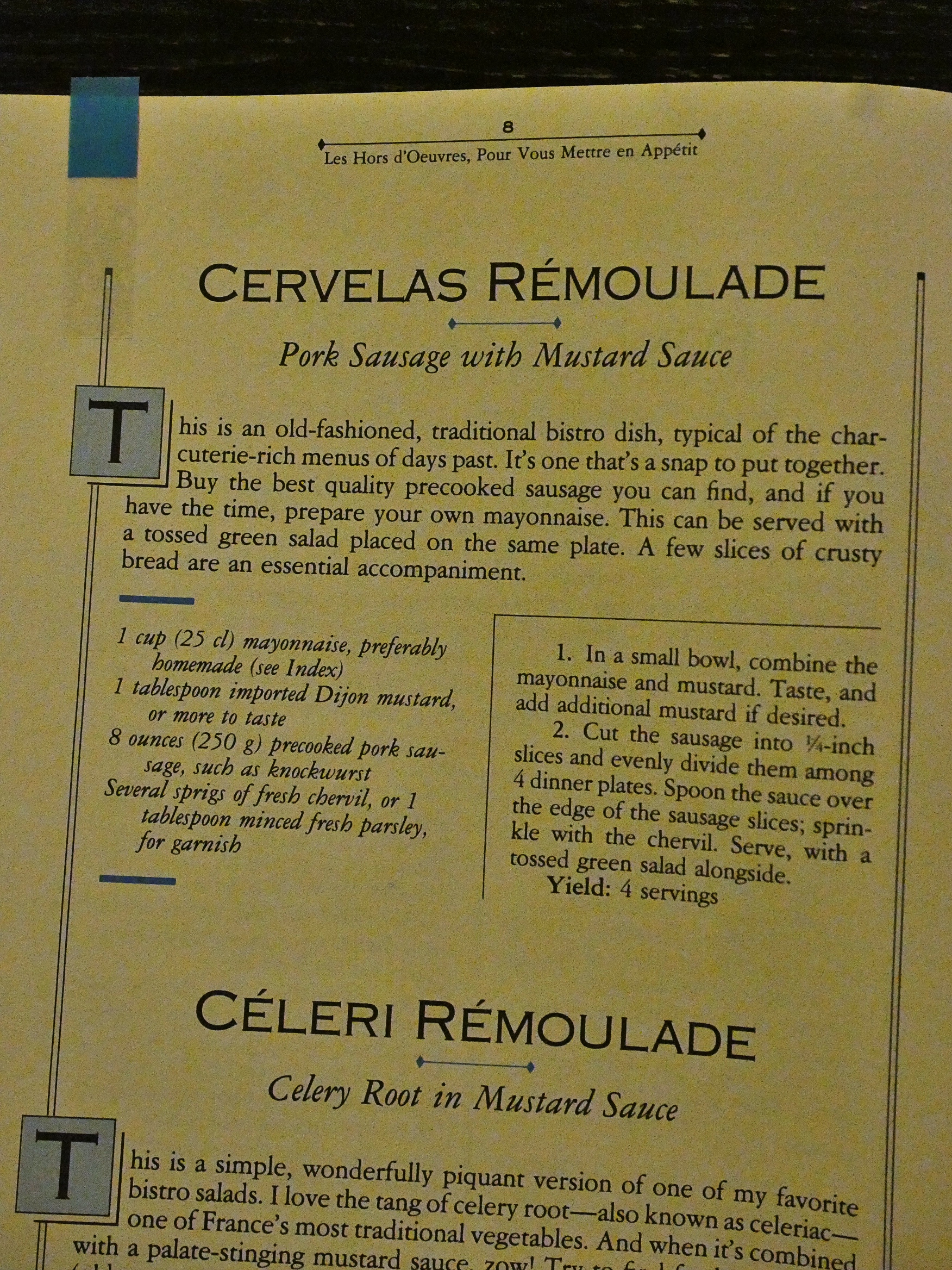 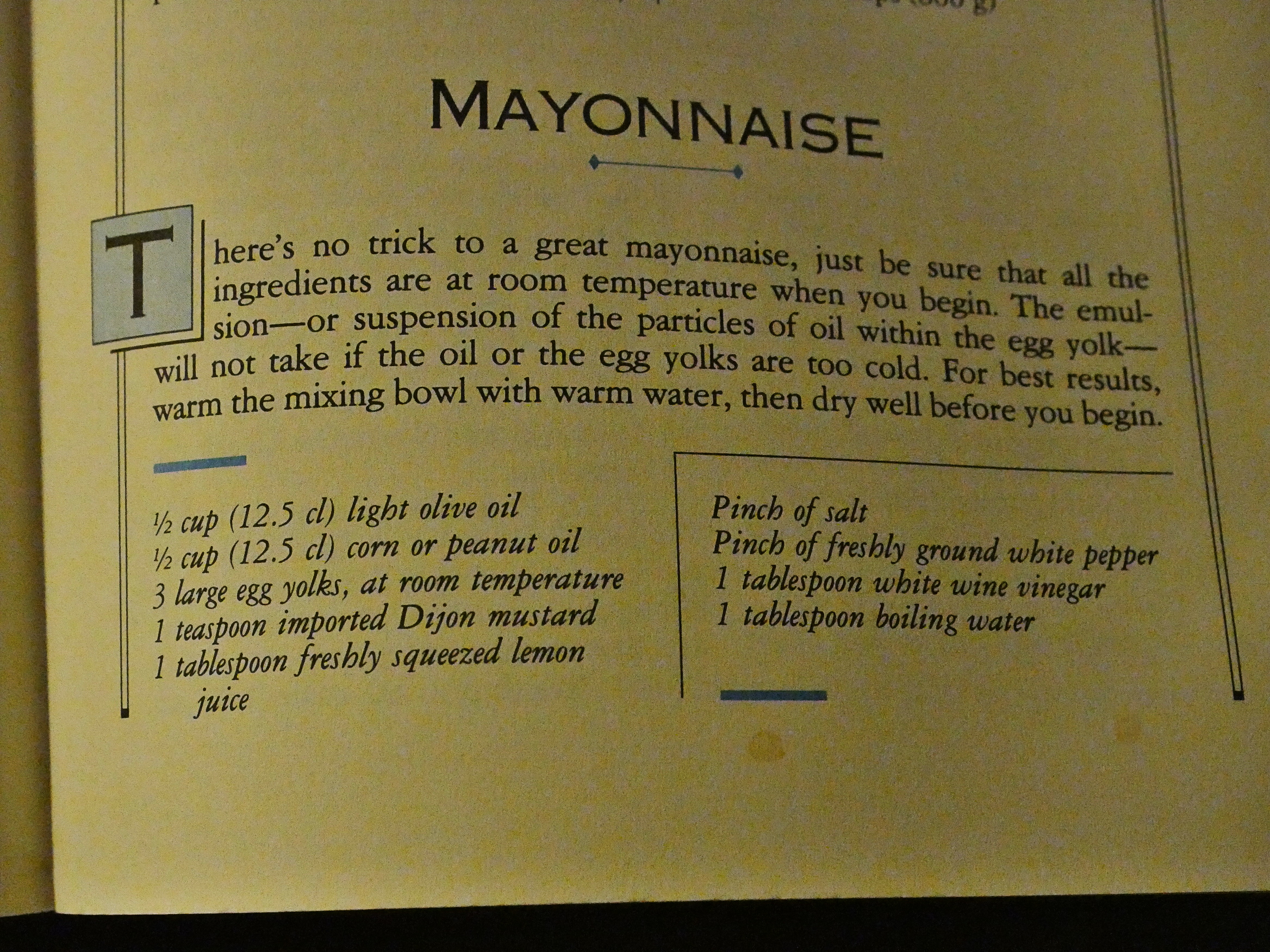 So the starter couldn’t possibly be simpler: It’s sausages with a Dijon mayonnaise. But that means that I get another crack at making mayonnaise: My two previous attempts at making aioli (basically the same thing) were less than perfect. 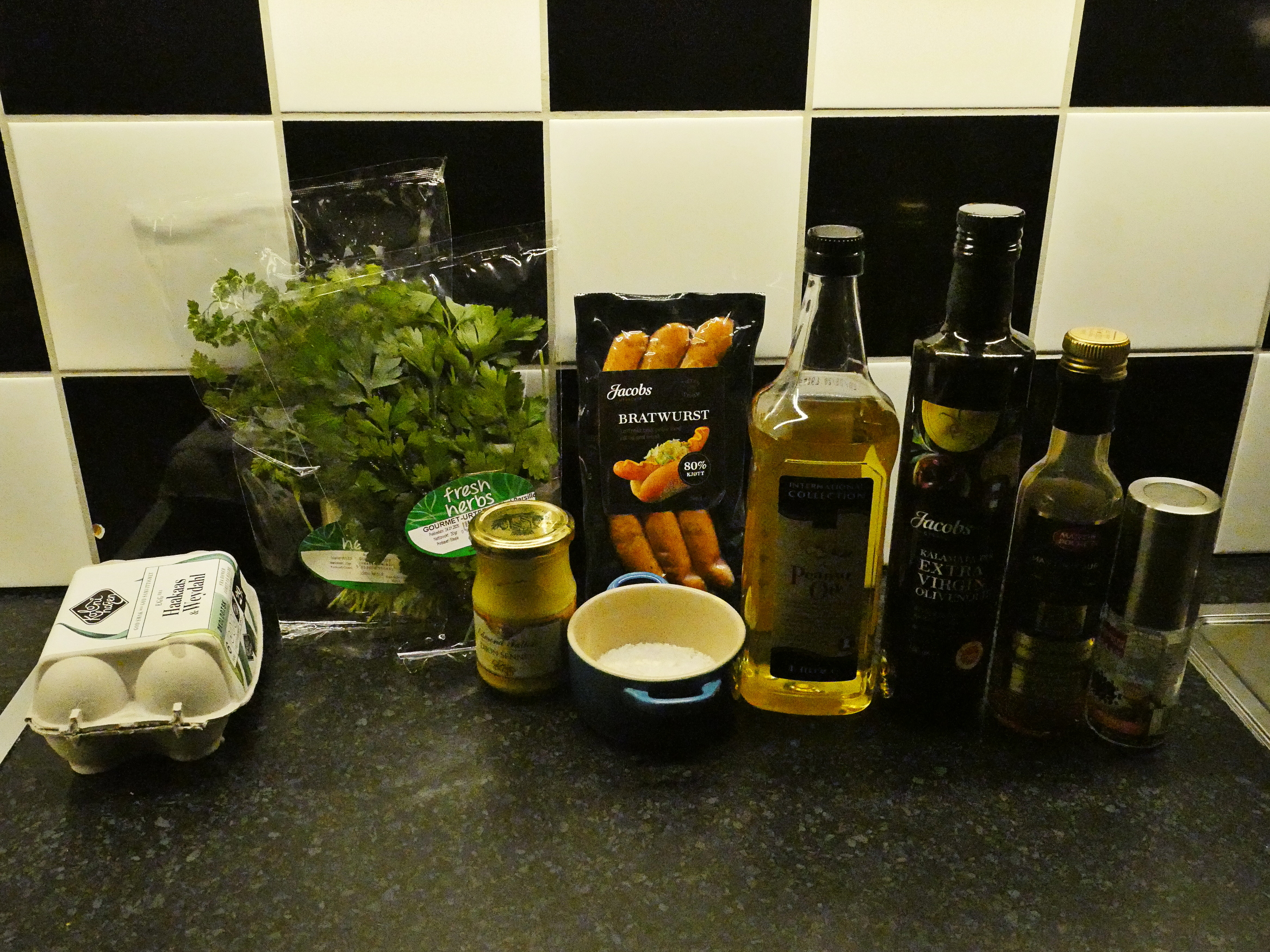 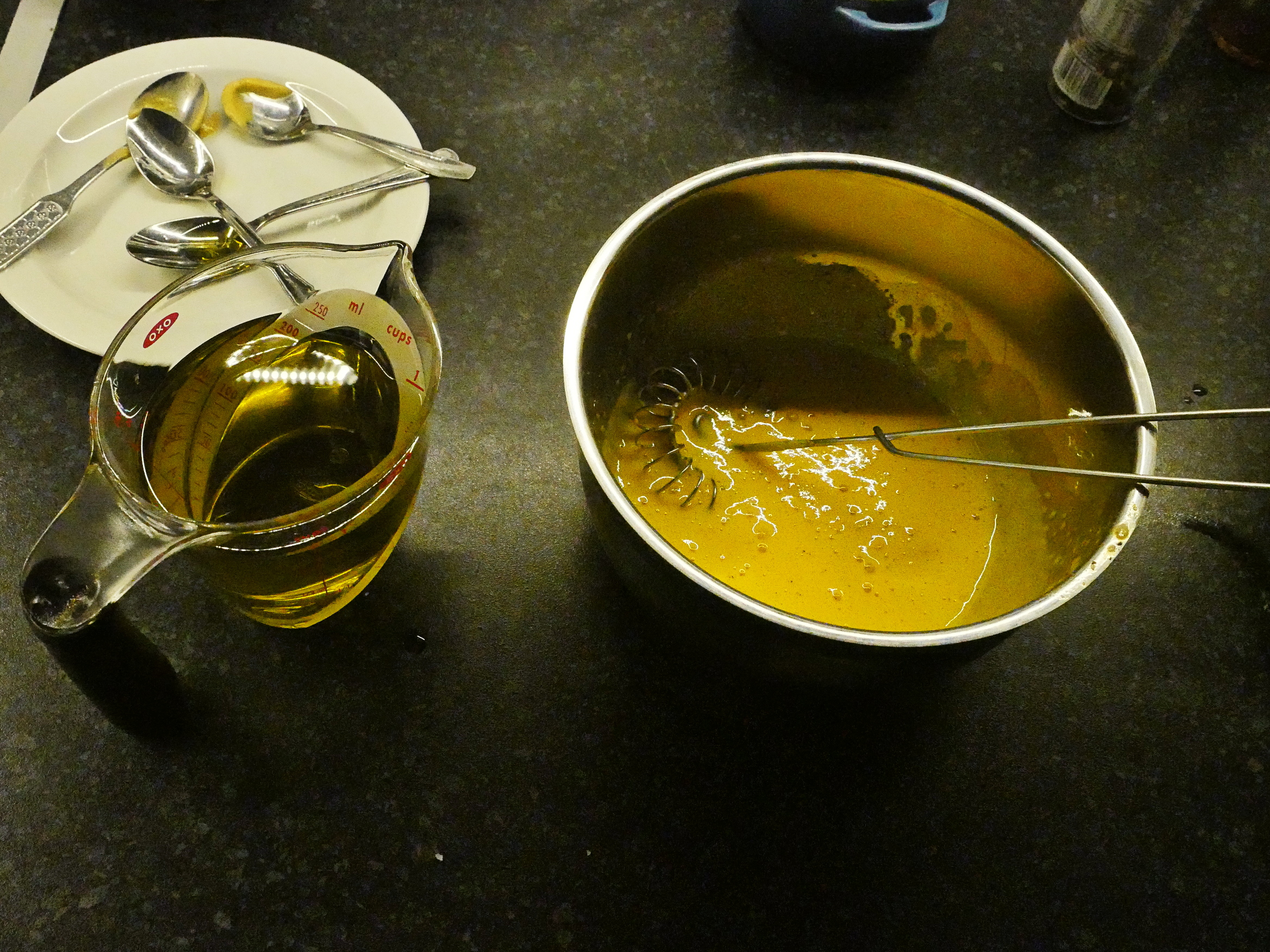 This time, instead of trying to use an electric mixer thing, I thought I’d do it the old-fashioned way. Just whisk the yolks a bit, and then add a teensy amount of oil, and whisk some more, and then a bit more and etc etc you get the idea. And it worked! The mayo didn’t break!

I did, however, spill the oil over the counter while doing all this. Do you know how many paper towels are required to map up two cups of oil?

Should have used a squeegee instead. 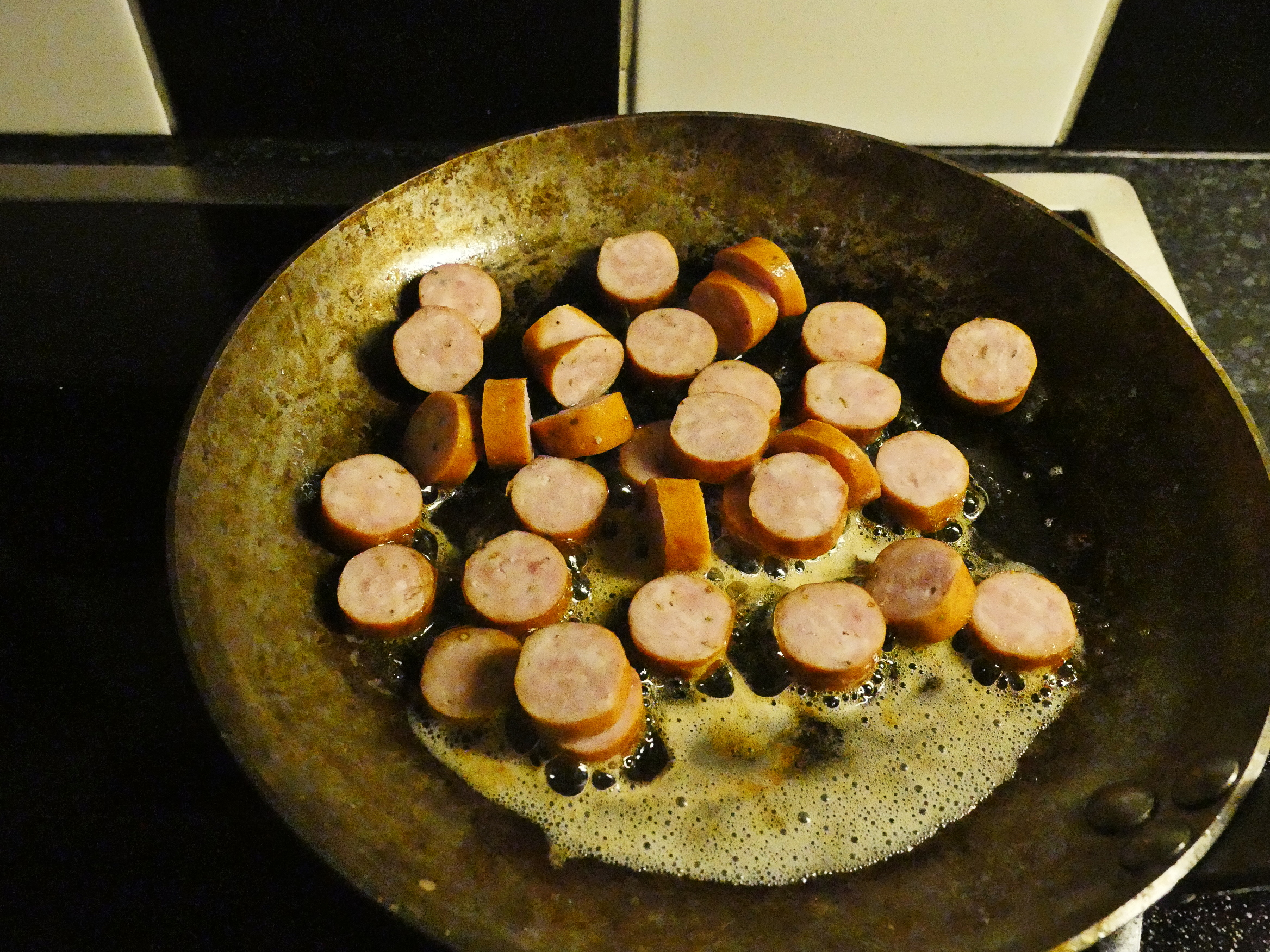 The recipe didn’t specify heating the sausages, but I thought it sounded nicer warm… And it’s a … simple dish? It’s Dijon mayo over sausage. But with some bread, it’s a very nice nibbly little dish to nibble on while reading a book. 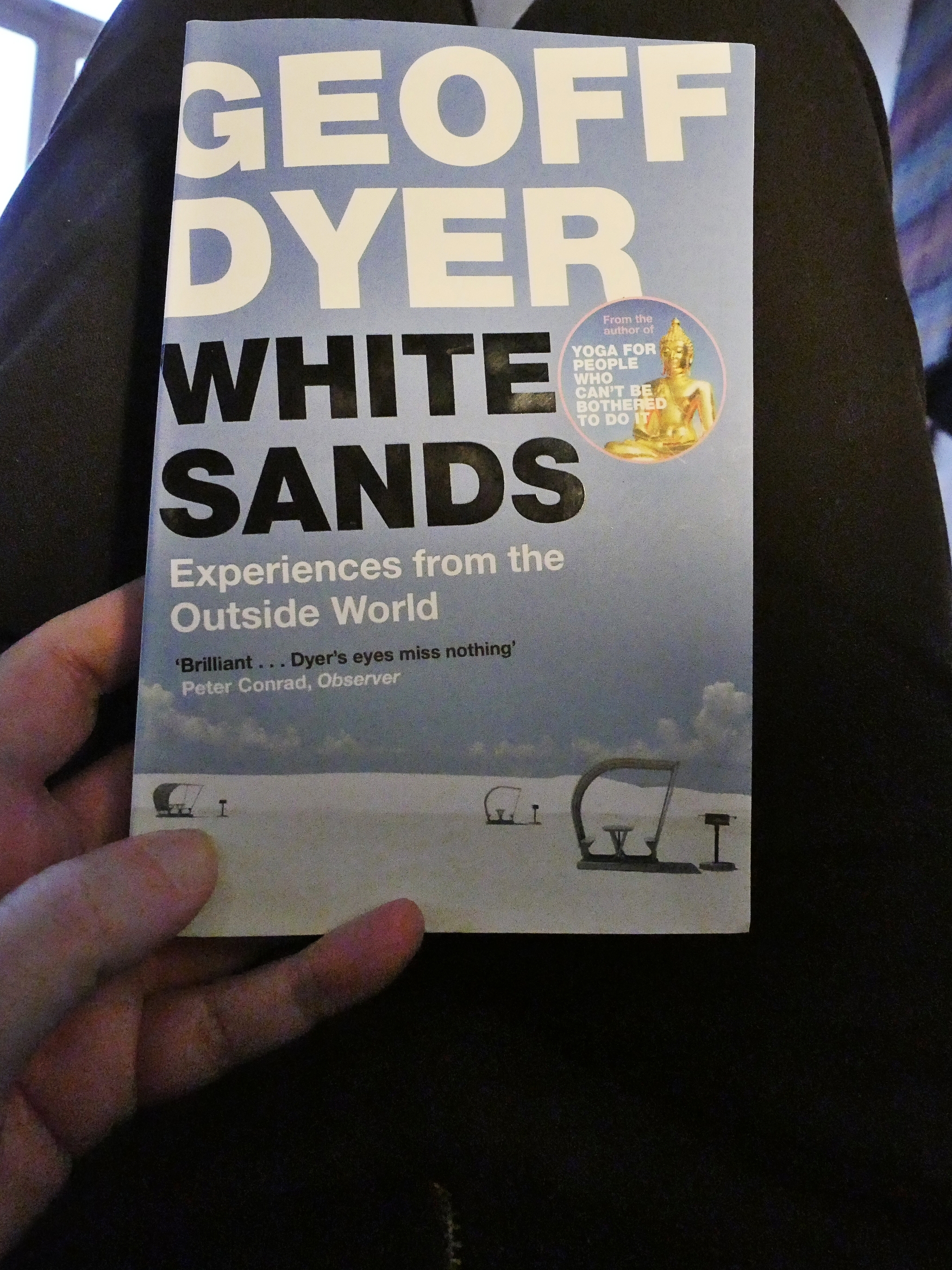 Which is Geoff Dyer’s White Sands.

I’ve previously read only his Zona book. It’s about Stalker, and it’s fabulous. It’s structured as a sort of meditation and a diversion from doing what Dyer should be doing, so he’s retelling the plot of Stalker and talking about other things, and it has lines like:

There are more and more things […] from which one has to avert one’s ears and eyes. With television I have my strict rule, a rule applying to Jeremy Clarkson, Jonathan Ross, Russell Brand, Graham Norton and a whole bunch of others whose names I don’t even know; I won’t have these people in the house.

How can you not love this man? So I bough a handful of his books, but haven’t found the time to read them. 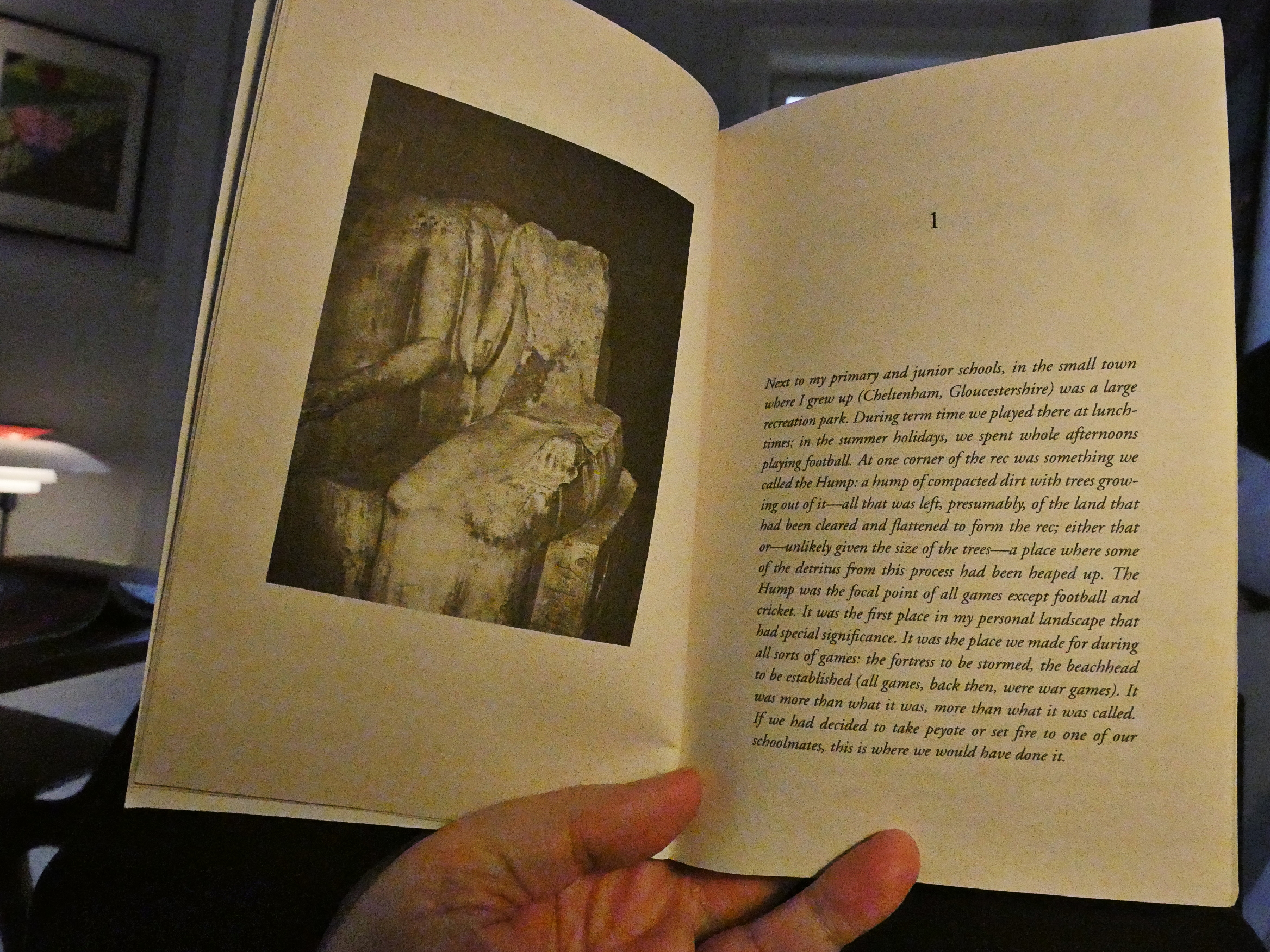 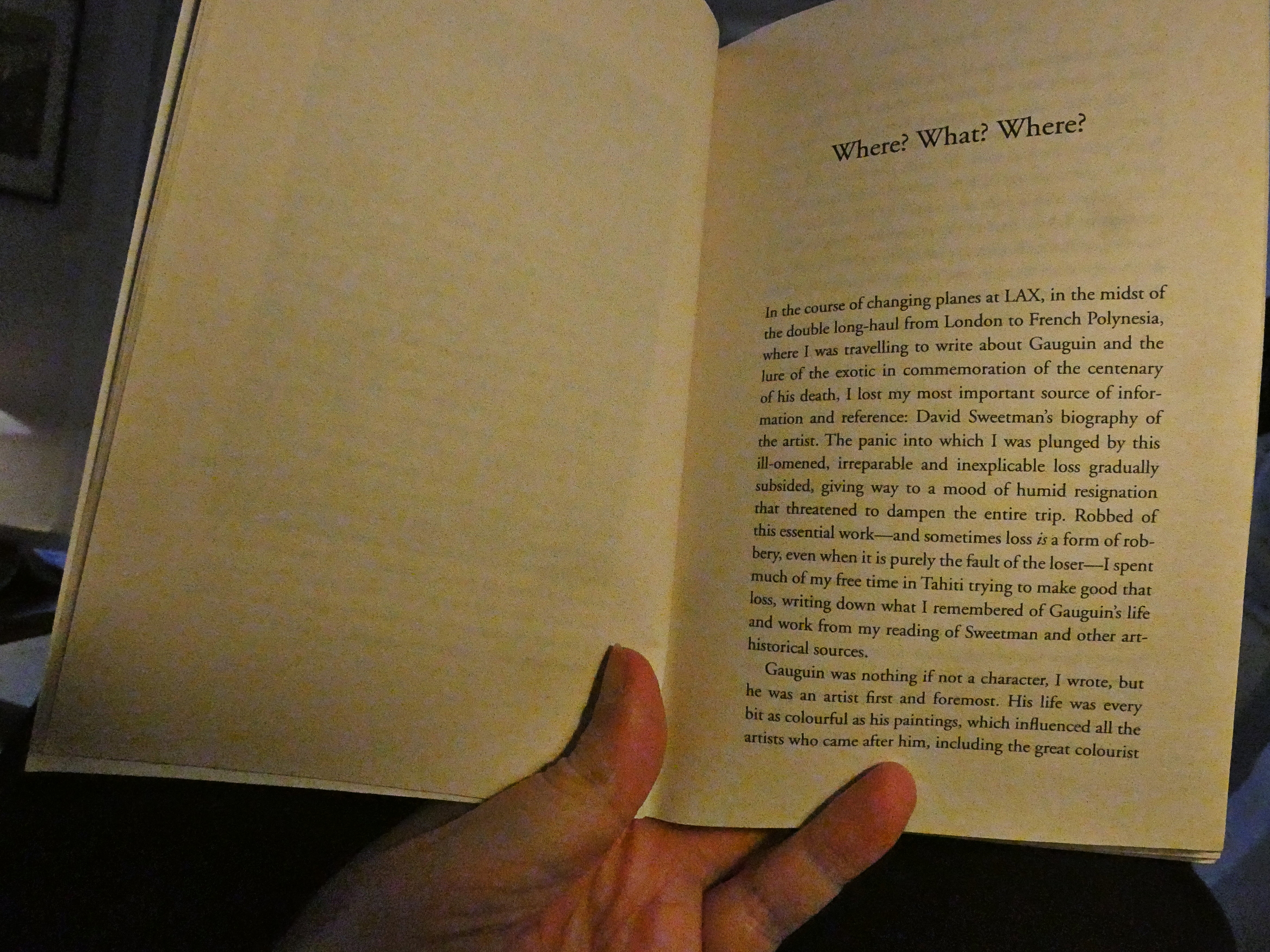 Well, OK, this isn’t Zona. It reads like it’s a selection of magazine articles… which it turns out to be! Darn! That’s really not my favourite genre of writing. 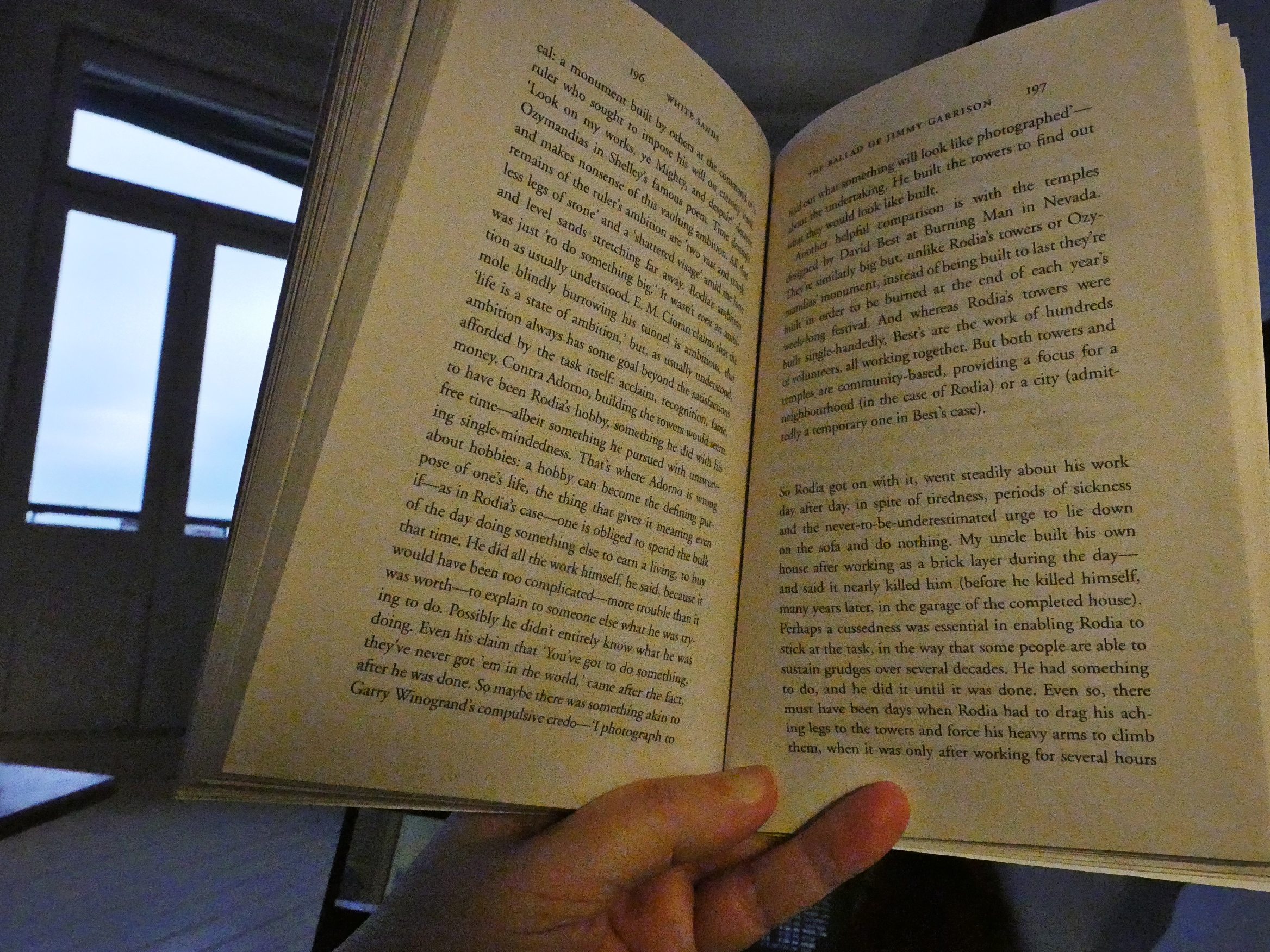 But, I mean, it’s fine… Dyer tries to make it cohere with some interstitial bits, and many of the pieces are about travelling to see big outdoors art pieces (like the Watts Towers). But it reads like a collection of magazine articles. Interesting ones, and it made me want to go have a peek at some of these things, like the Spiral Jetty.

And the bit about Svalbard was very funny. I mean, Dyer is witty throughout: It’s a pleasant, fun read, but I was still disappointed. Perhaps with my expectations lowered somewhat, the next Dyer book I read will be less er disappointing.

So I need more food: So this is yet another beef stew, and like the previous (how many is it now? three? four?) beef stews, it’s the same thing: Throw some beef into a pan with some wine, let it sit for a day in the fridge, and then steep the fuck out of it. So the normal ingredients… this time the variation is that we have olives in the stew. So chuck some chuck in a pan with some veggies, and pour over some wine, and then into the fridge. 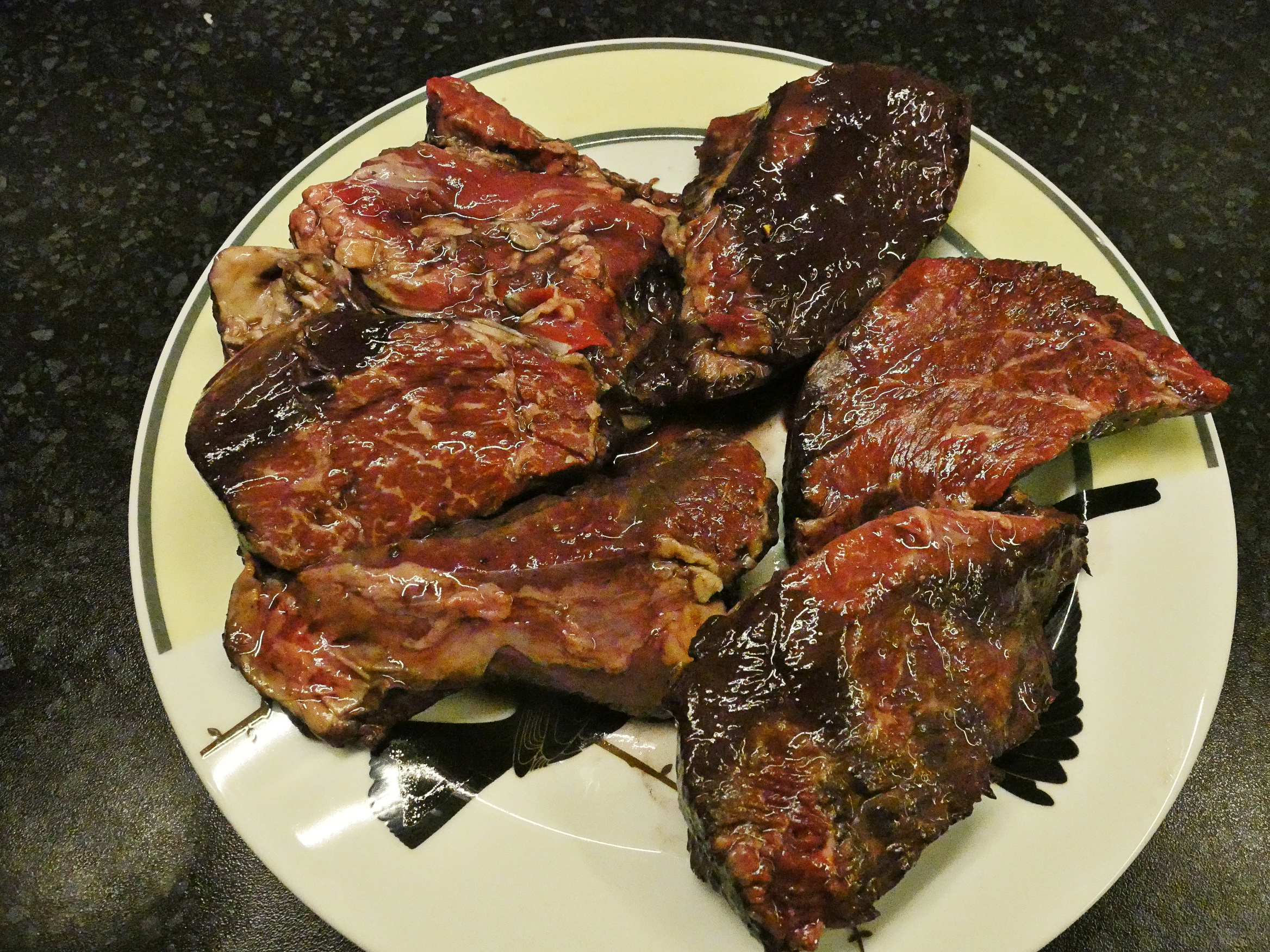 It comes out looking quite purple the day after. And not very appetising. 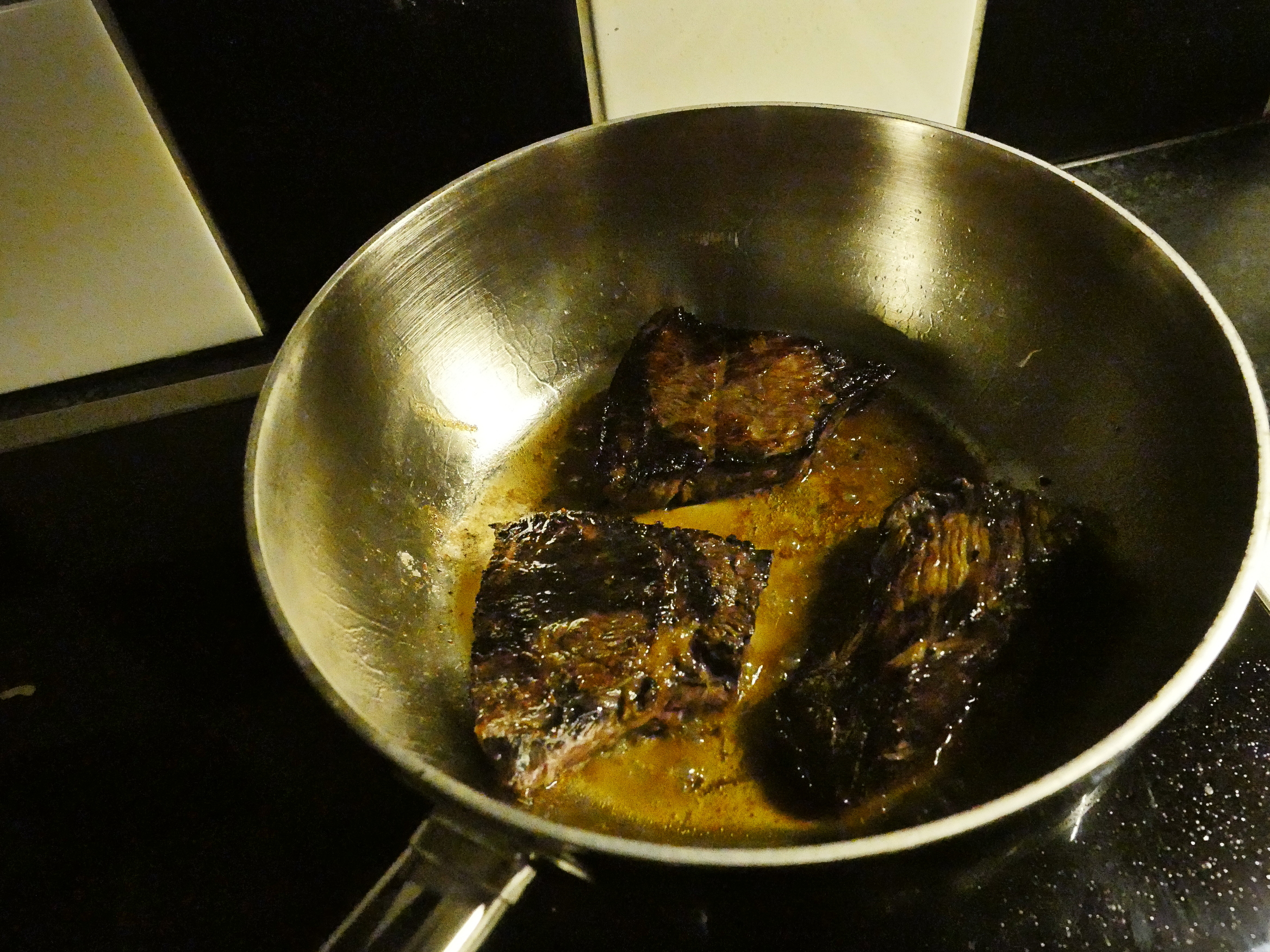 Then we brown the shit out of it. So I get a chance to try out this new gadget, which de-pits pitted olives. The Nyons olives tasted just fine, but I’m not sure it was worth it all. They’re kinda on the mushy side, and I prefer them a bit firmer, but they’re fine. So, into a pot for some cooking. The recipe specified “two sprigs of thyme”, so I put half a plant in. Wells is very … careful? about spices and herbs. No, indeed, it does not. Man, these pics are totally out of focus… I must have twiddled with something on the camera…

It tastes… like… it looks? It’s not very interesting this time either. Perhaps I’m using the wrong cuts of beef, or the wrong wine? It should just taste… more…