I’ve had my servers in my employer’s data room since 1997, but (since that company doesn’t exist any more), I had to make some changes. I had planned on doing some coloc thing locally here, so I bought some semi-spiffy new servers.

But then I changed my mind. It all just seemed too much work: I mean, doing appointments for installing and/or fixing stuff, and I finally just went with renting servers here and there.

So yesterday I went and collected my servers and put them into storage, where they’ll probably remain until they’re too old to be useful and I can throw them away.

But where’s all my serverey stuff now? In the clown.

First of all, I put my WordPress sites on DigitalOcean $5 virtual machine instances. I can’t properly express how easy and straightforward that process is, but this guy can:

Even the API and the docs are so well built that it feelslike a pet project I found on Github. Where is all of the corporate nonsense cluttering up the API? Where is the overengineered factory templates where I have to set up a bunch of services using a totally different API before I can start my first VM? Why are the docs so straightforward and in one place in one format? This hardly feels like enterprise software at all.

Once you get past the slightly cutesy naming convention (“Droplets” and stuff), it’s all so easy and unconfusing. I went with pre-rolled WordPress images, and it comes with UFW firewall, fail2ban and certbot already set up. It’s perfect! And by that I mean, it’s exactly like it would have been if I’d done it myself. Except my image would also have Emacs pre-installed, of course.

(The reason I want WordPress on separate VM instances is that I assume that they’ll eventually be hacked. It’s WordPress, after all; the CMS with the most insane maintenance model imaginable.)

For my real servers, I went with Hetzner. Because it’s in Europe. My main server (my MTA and all my pet projects, of which there are many), is in Helsinki, and runs at €87 per month. Of that, €53 is the disk, which is a weird pricing model, since disks are inexpensive, but I guess that’s how they make money? It’s a physical server, because if it’s a VM, it’s probably hacked already, what with all the new Intel bugs that shows up every two weeks. The Intel(R) Core(TM) i7-6700 CPU @ 3.40GHz server itself is just €34…

For the news.gmane.io server, I had to go more expensive. It’s a tradspool NNTP server, which means that every article takes one file. This is rather slow on spinning rust, so I had to find a configuration that could do that over an SSD RAID. Total cost of that is (+ 189 114 86) => €389 per month. Because it’s a AMD EPYC 7551P 32-Core Processor with 132MB RAM. A two core machine with 16MB RAM would have been fine, but Hetzner doesn’t have that in their lineup. This server is in Germany.

Hetzner seems fine. Getting the machines built and installed to my specifications took a day or so; if you can use one of the standard configurations, you can get one on the hour, apparently. The web interface is old-fashioned and clunky, but it gets the job done. DigitalOcean has a much better web.

But what about backup? I briefly considered just rsyncing everything home, and that would have been no problem. The problem is that if I ever need to use that backup, my upstream is teensy, so re-establishing a new server out there somewhere would take forever. (The Gmane spool is about 5TB.)

So I needed backup somewhere, and I chose OVH, because they’re another European company… and their interfaces are pretty primitive. For instance, when installing the initial image, it was all stuff like: 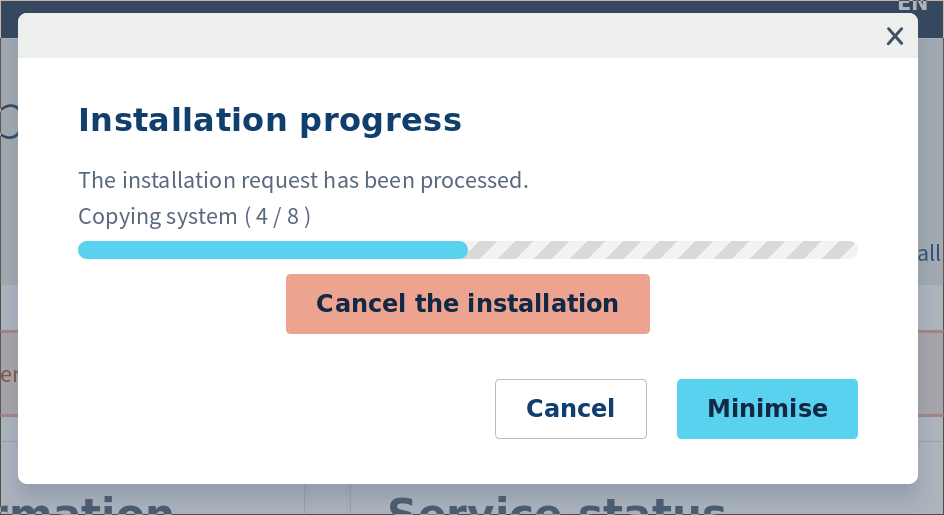 which would hang for hours until I reloaded the web page. It doesn’t give you a lot of confidence. But, what the hey, it’s just backup, anyway. And it’s $175 per month.

And… I just tried logging on to the OVH web site, and it said my credentials were invalid. And then when doing password recovery… I’m not getting any email (after waiting for 15 minutes).

So, no, I wouldn’t really recommend OVH much, but the server itself works fine, and I get about 200Mbps when doing backups from the server in Germany to the OVH server in London. (Gotta be spread out geographically! For no reason!)

None of the servers seem to have any hidden bandwidth fees or anything, which is definitely not the case with the big American players (AWS and the like), where figuring out how much it all is going to cost is a full time job.

Having physical access to the servers definitely feels a lot safer: If I screw something up and the servers then won’t even boot, I can always fix that if I have physical access to them. If I screw up these servers, I do have some limited console access (the Helsinki Hetzner one seems to require that I have somebody there physically attach something to the server first!), but it’s definitely not the same as having access. So having very up-to-date backups is the name of the game, so that I can move to a new server fast-ish if the old one it unrecoverable. The Gmane news spool has continuous backup of the articles (they’re being fed out to the backup server with a couple of seconds delay), so nothing should be lost there, but it’ll take some time to rsync it all to a new server, I guess.