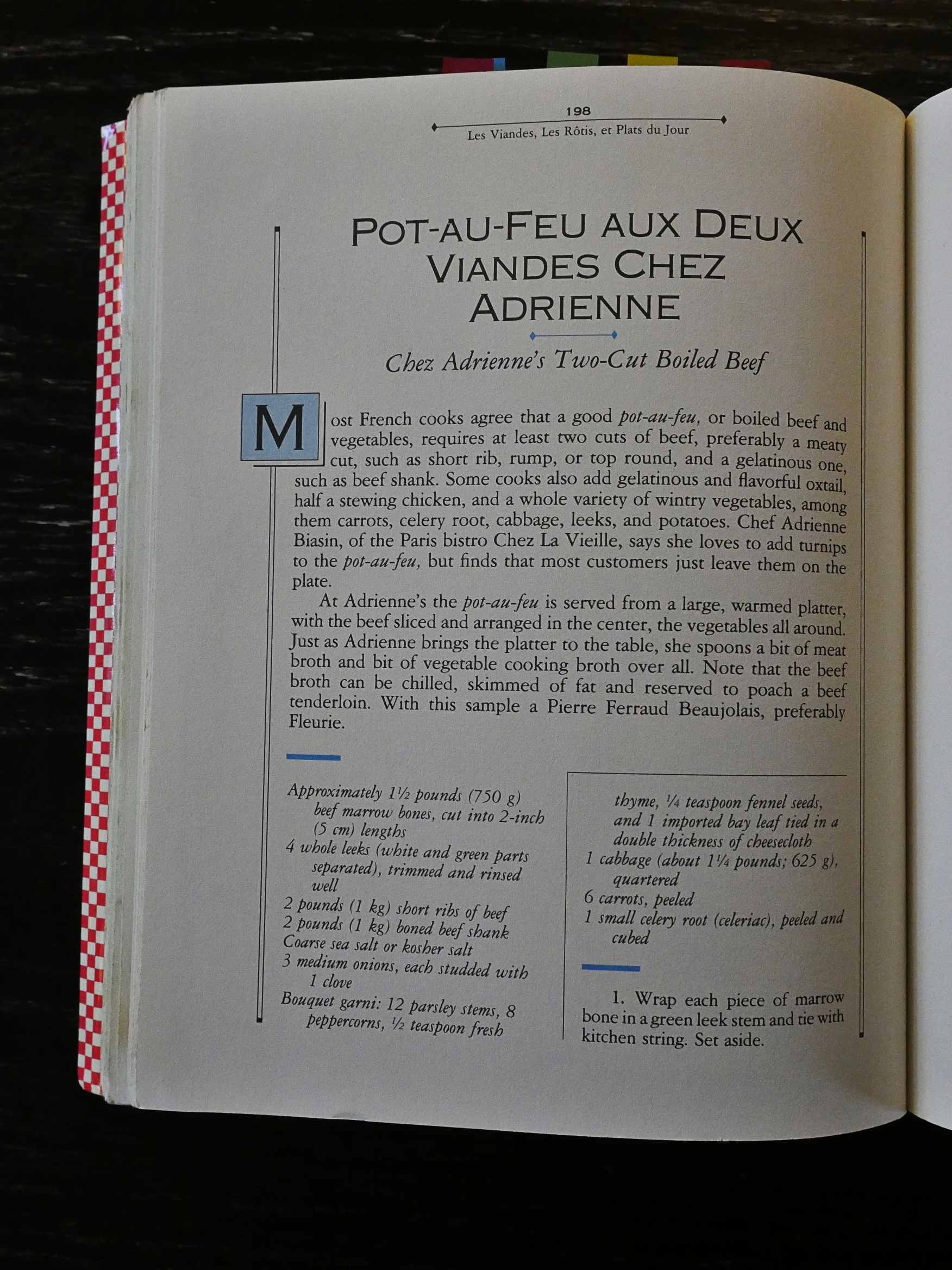 Today I’m doing this meaty meat recipe, which looks pretty fun. It’s the most complicated recipe so far, with about seven things that have to be timed to be finished at the same time. 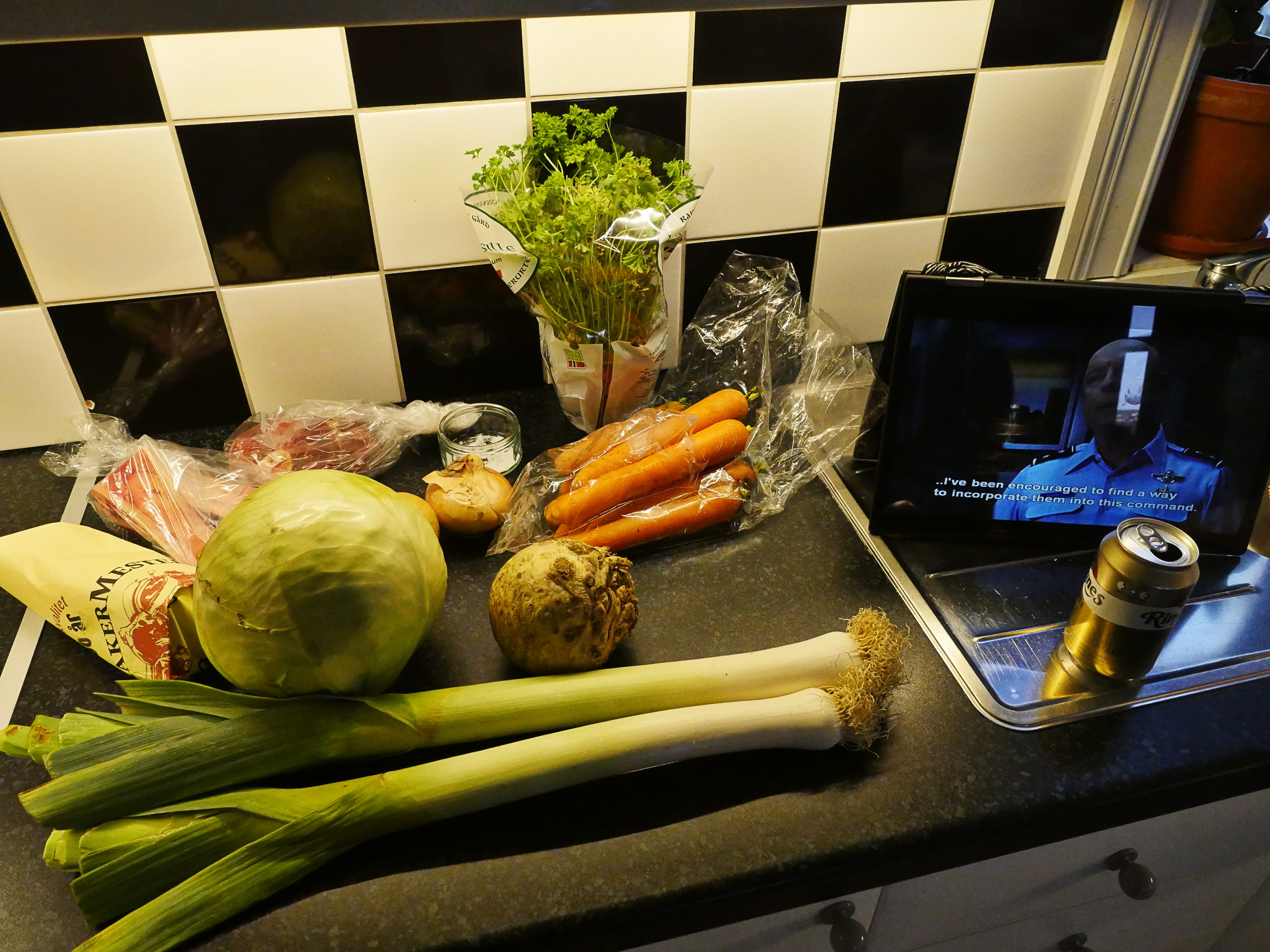 And it’s got marrow bones, which I’ve never cooked ever, so that’s even more fun. And, yes, I’m watching Stargate SG1 while cooking. So the marrows are swapped in leeks. 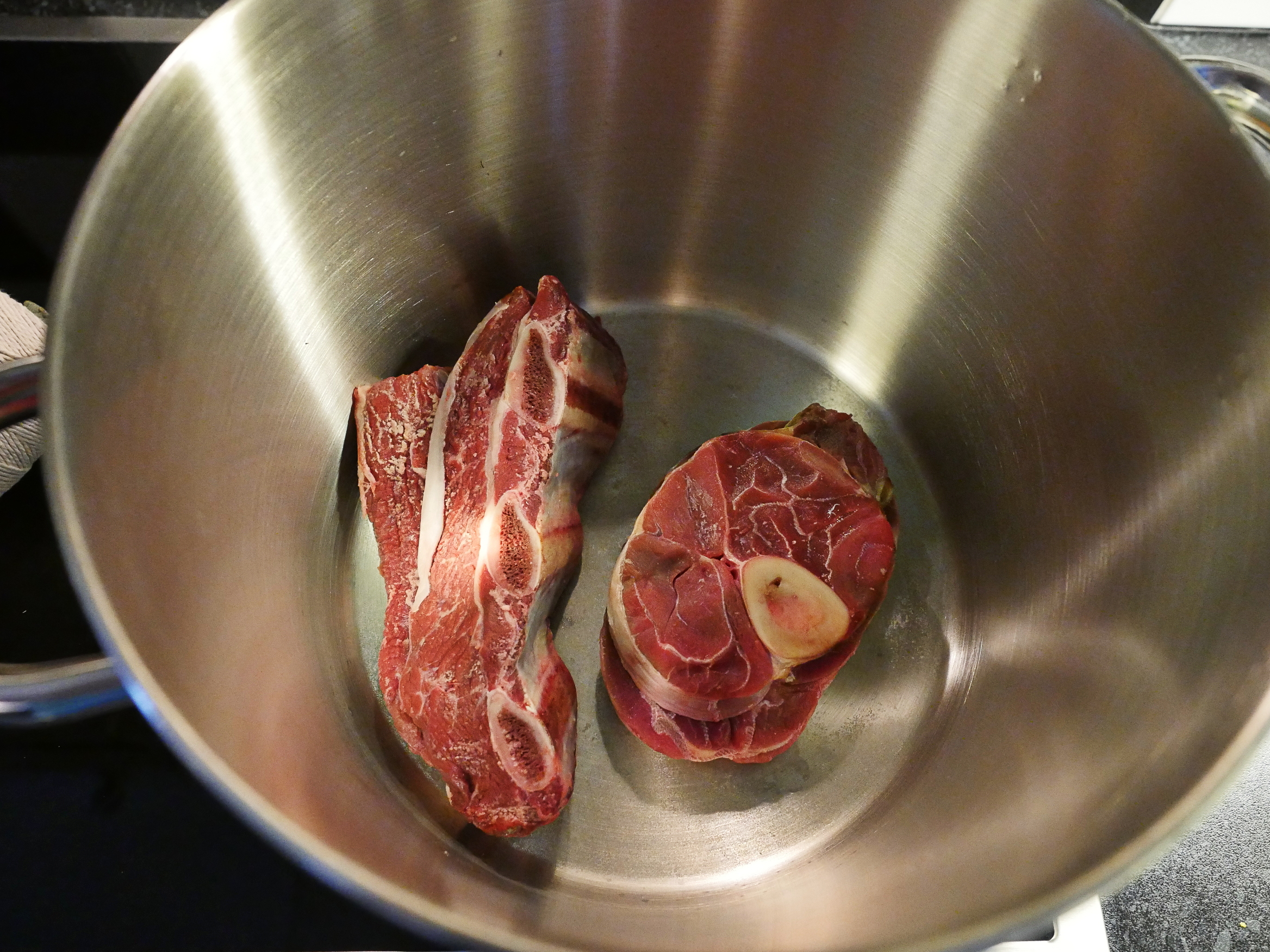 And there’s two meats being boiled. 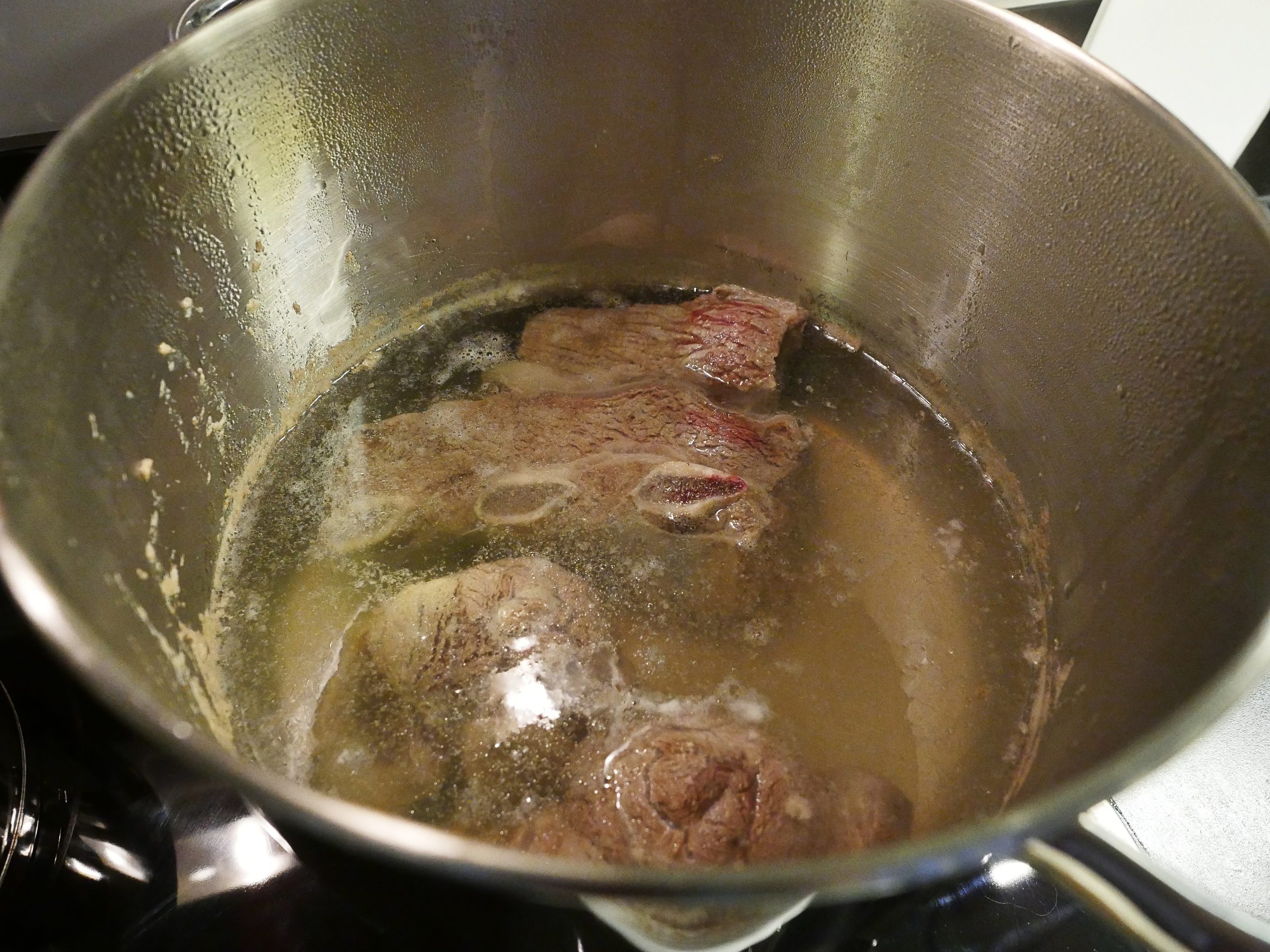 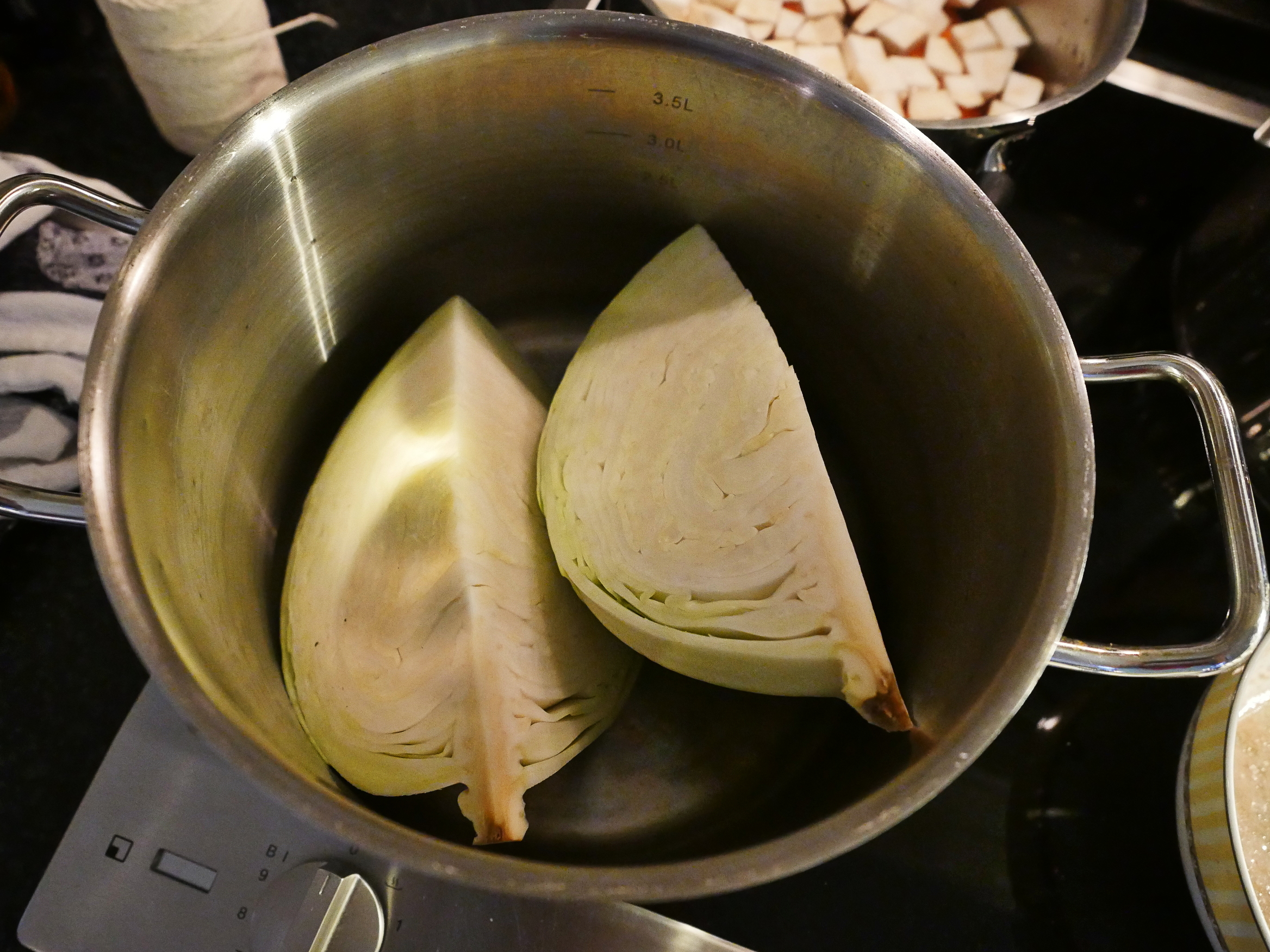 And a pot of cabbage… 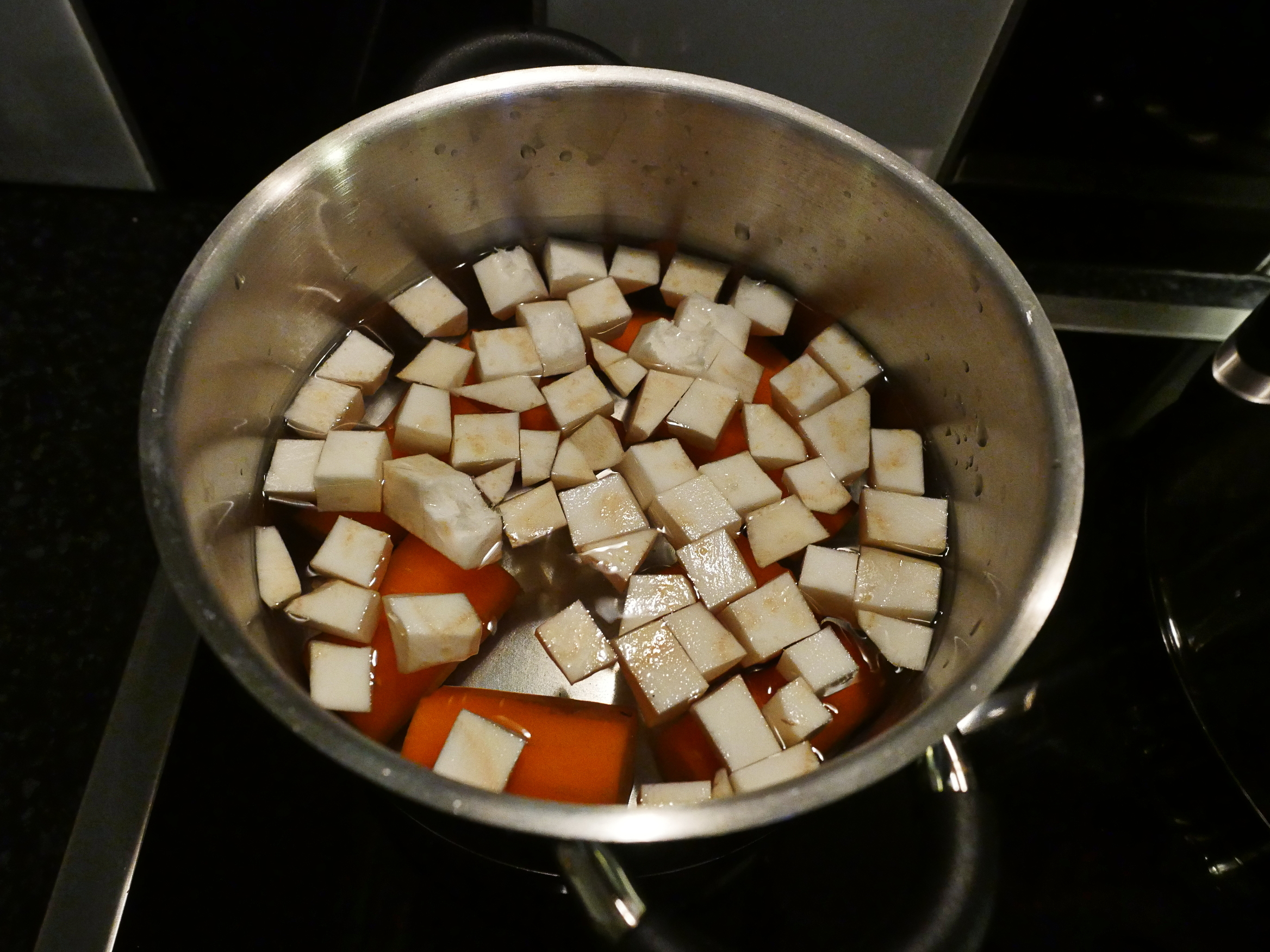 And a pot of other veggies. 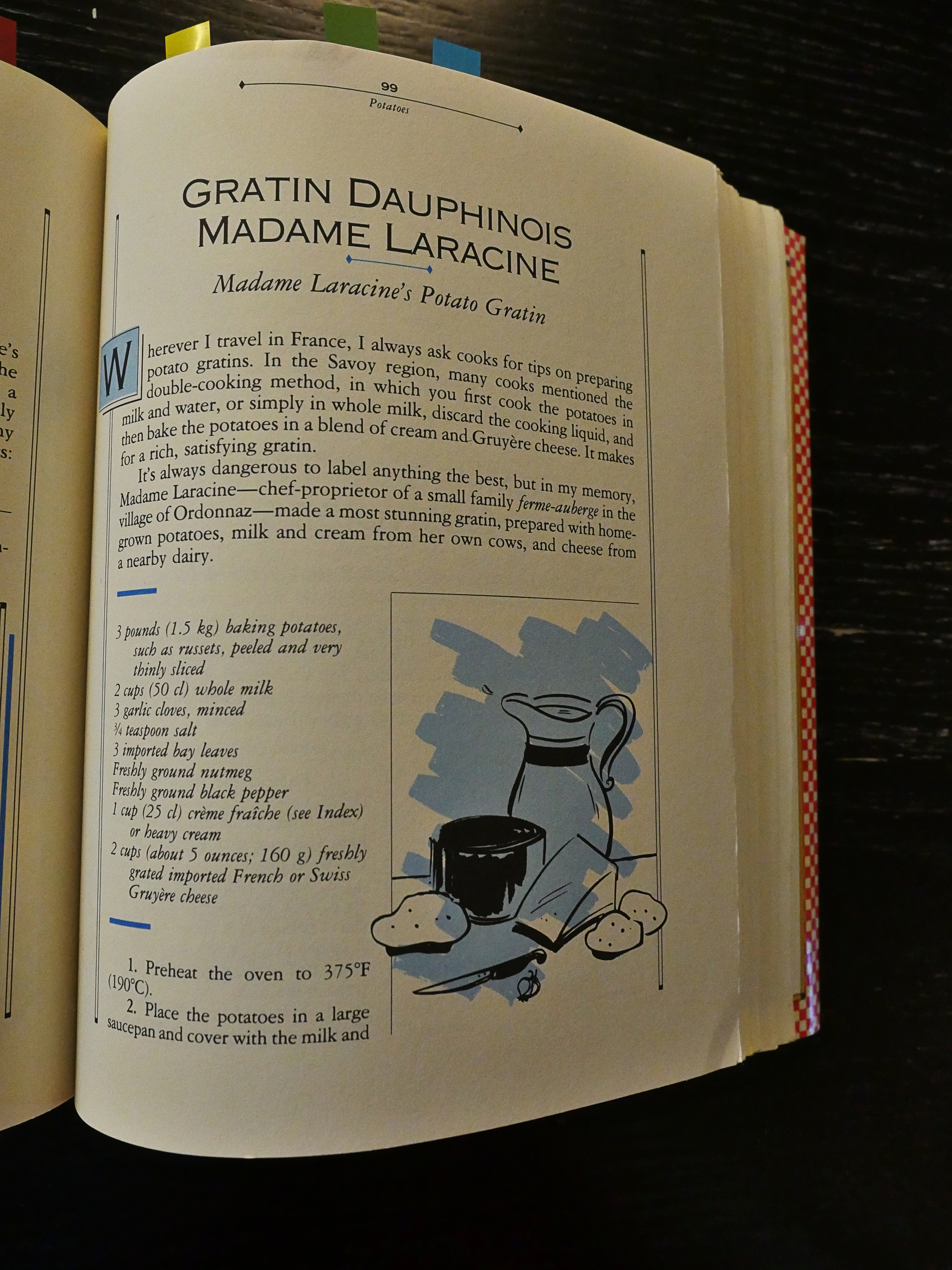 But I gotta have more starches, so I’m doing a gratin again, even if I hate cheeses in dishes like this. But this time I’m going to cheat and just put the cheeses on top, and perhaps it’ll be edible then. 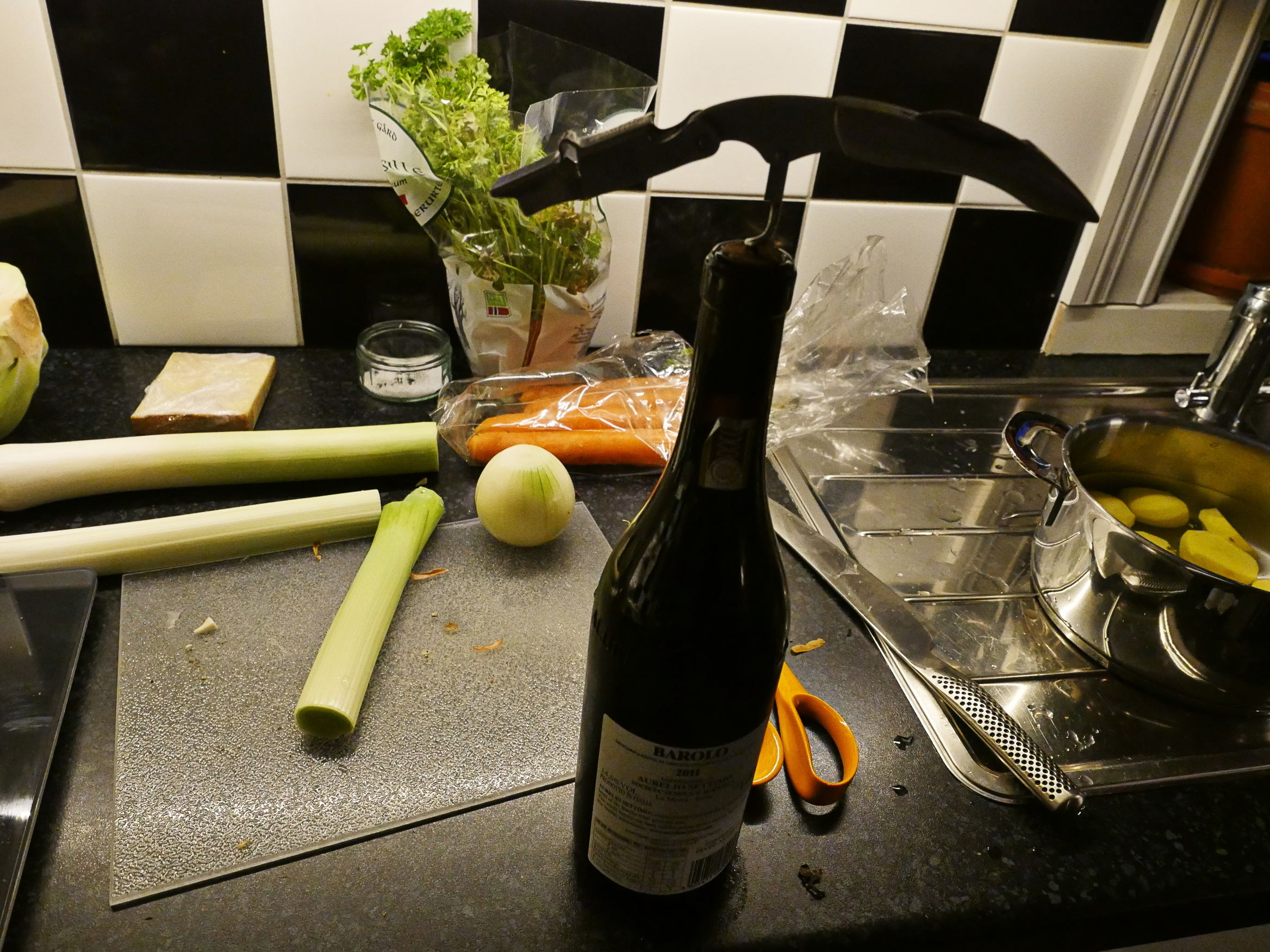 Wine for the cook… 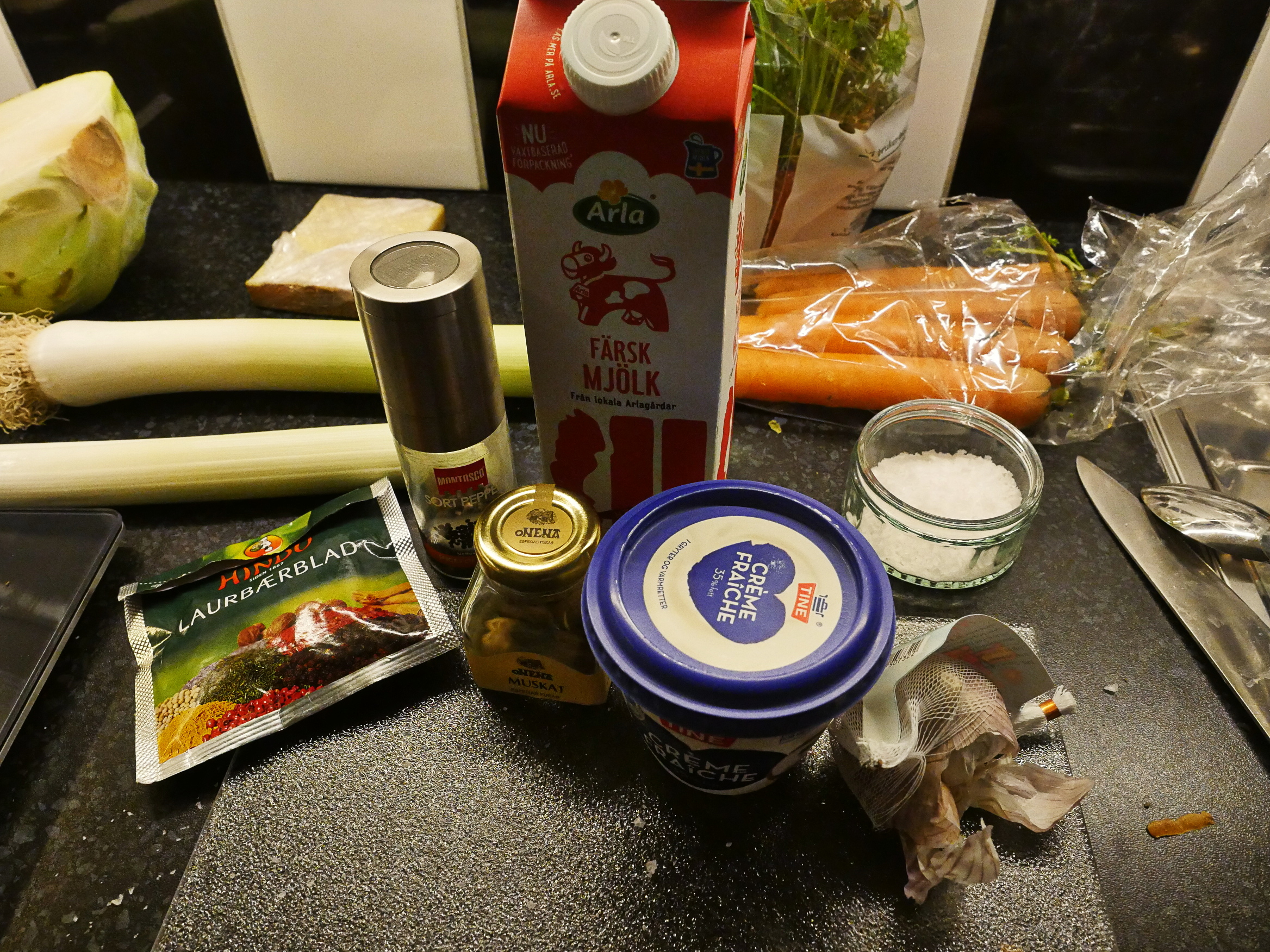 Ingredients for the potatoes. 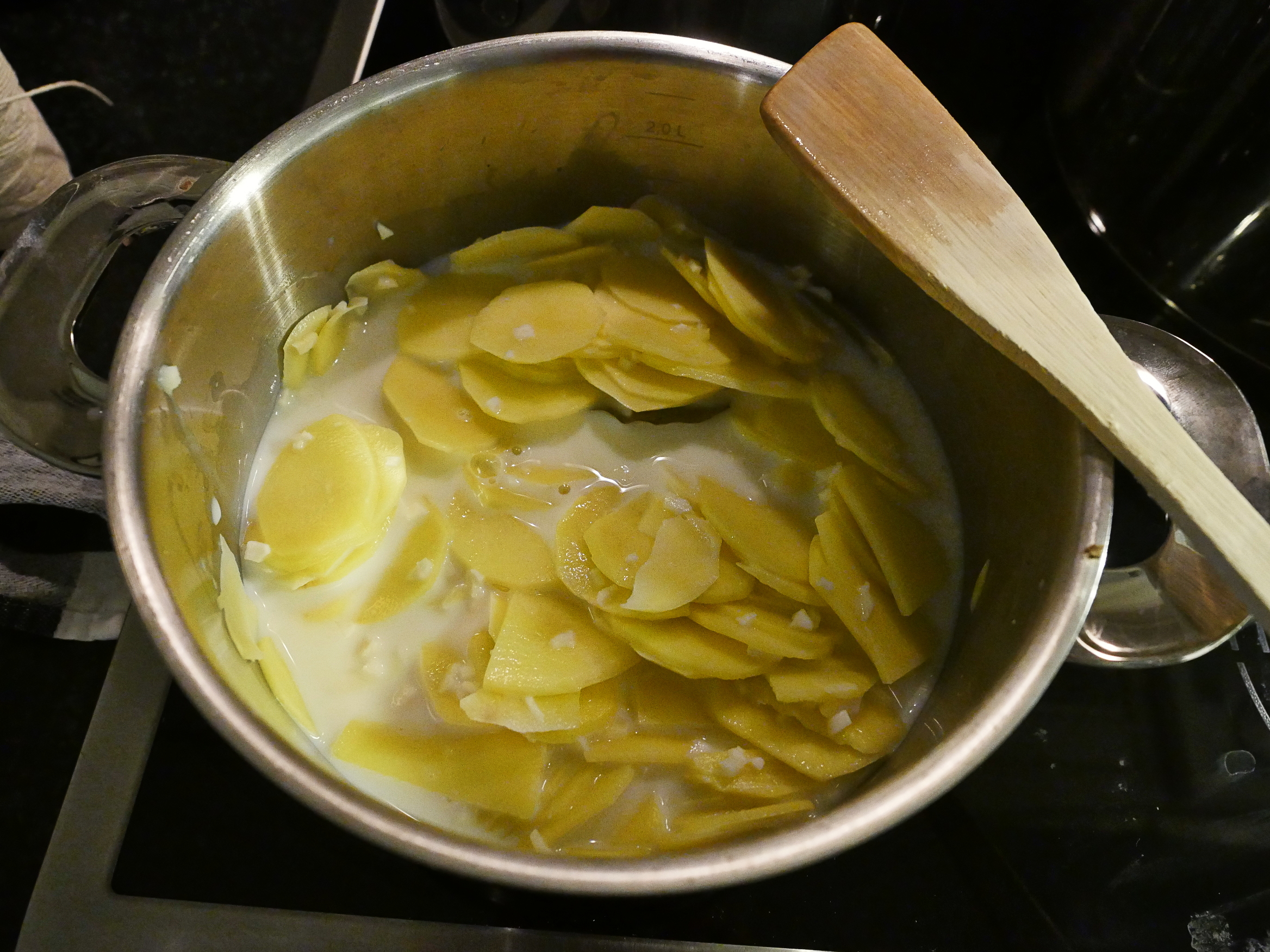 Weirdly enough, we boil the potatoes in a milk/water mixture first before putting into the oven. 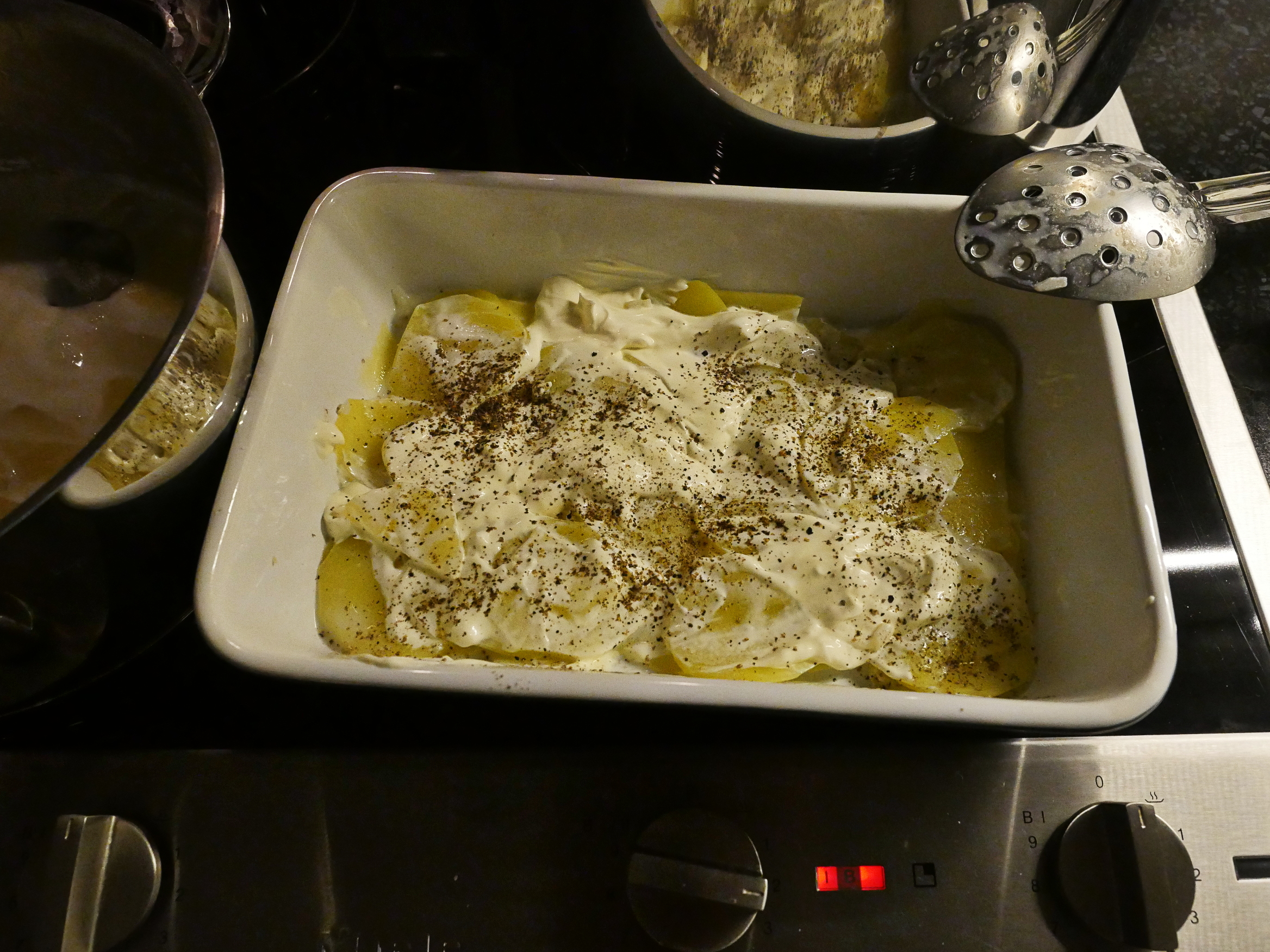 There you go. Looks absolutely horrible. 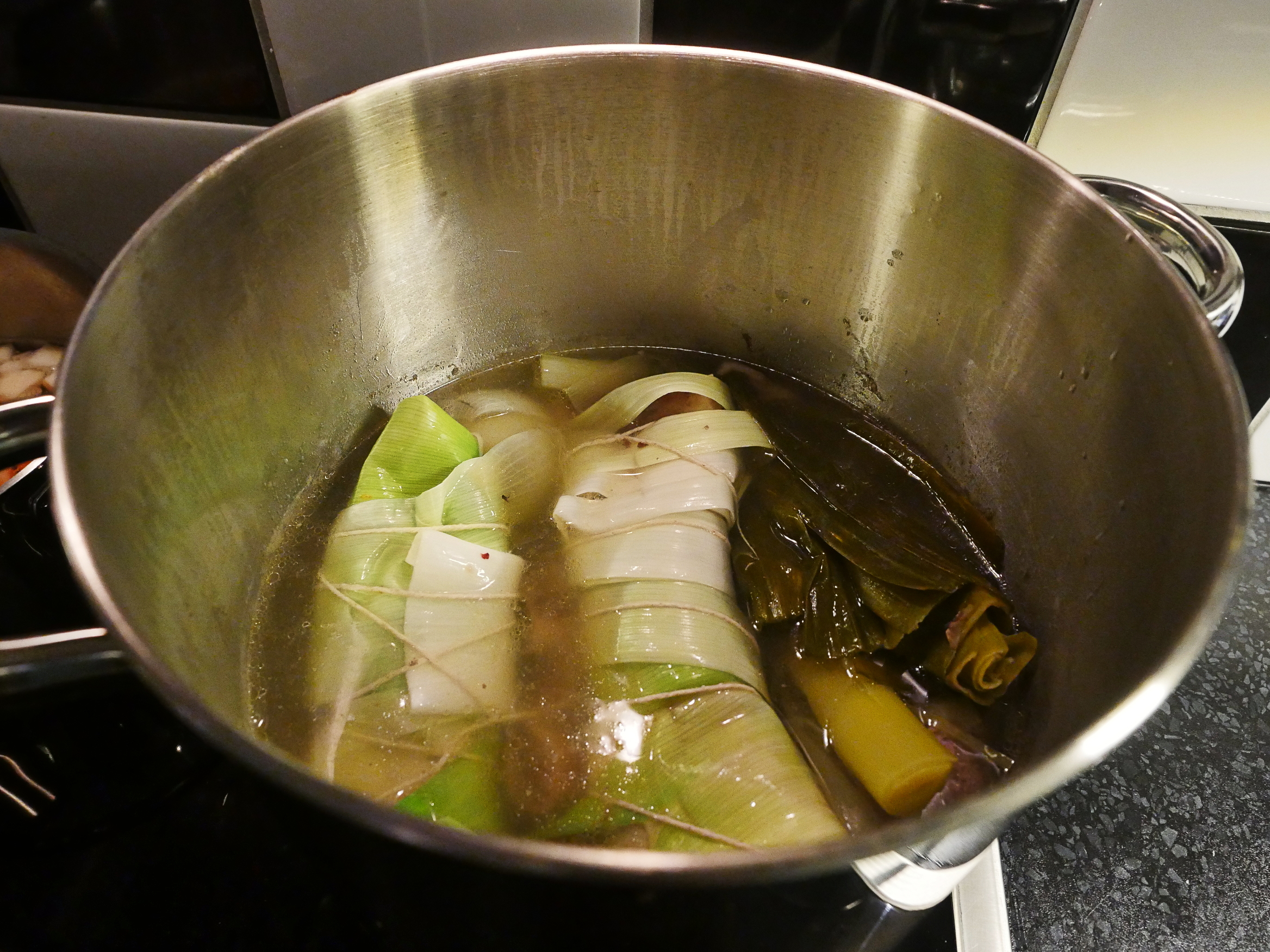 And then the meats have cooked (along with veggies) for ninety minutes, so in with the marrow bones.

Which cook for half an hour… 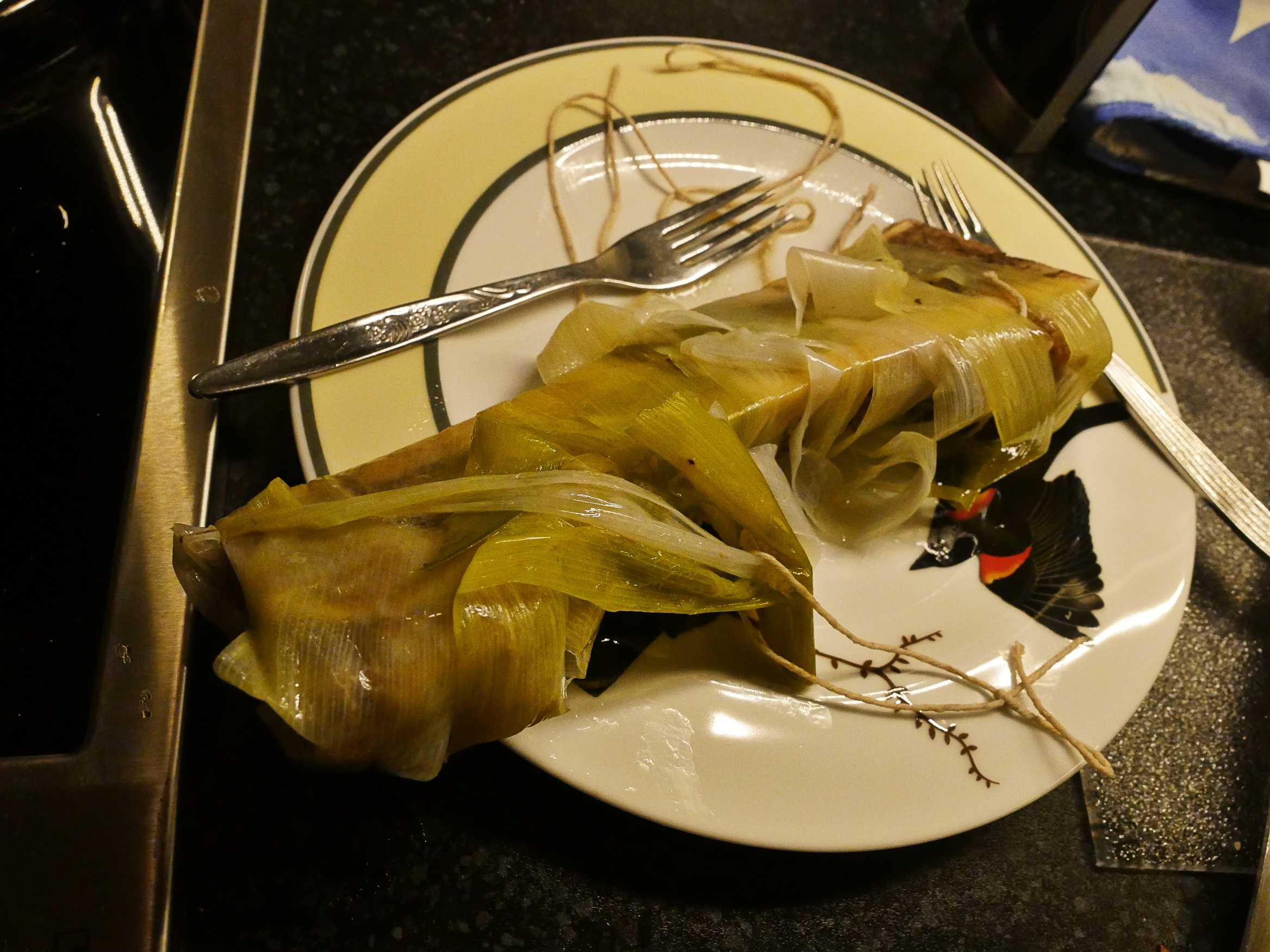 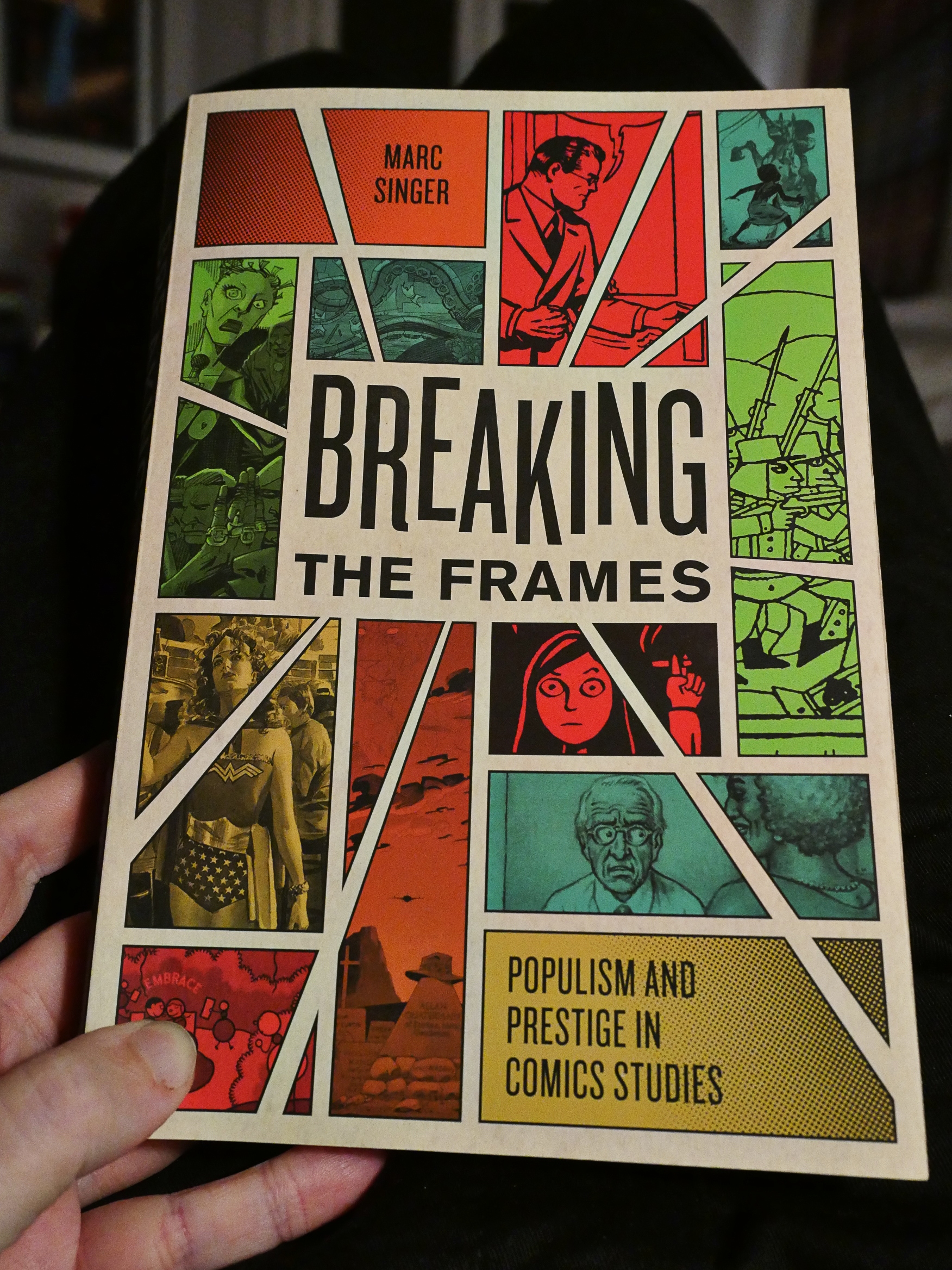 Quick, find the next book to read while eating!

*gasp* What I’m reading for this dish isn’t a novel! It’s… *shiver* non-fiction!

But it’s about comics, so it’s OK, I guess. SEO: Breaking the Frames by Marc Singer. 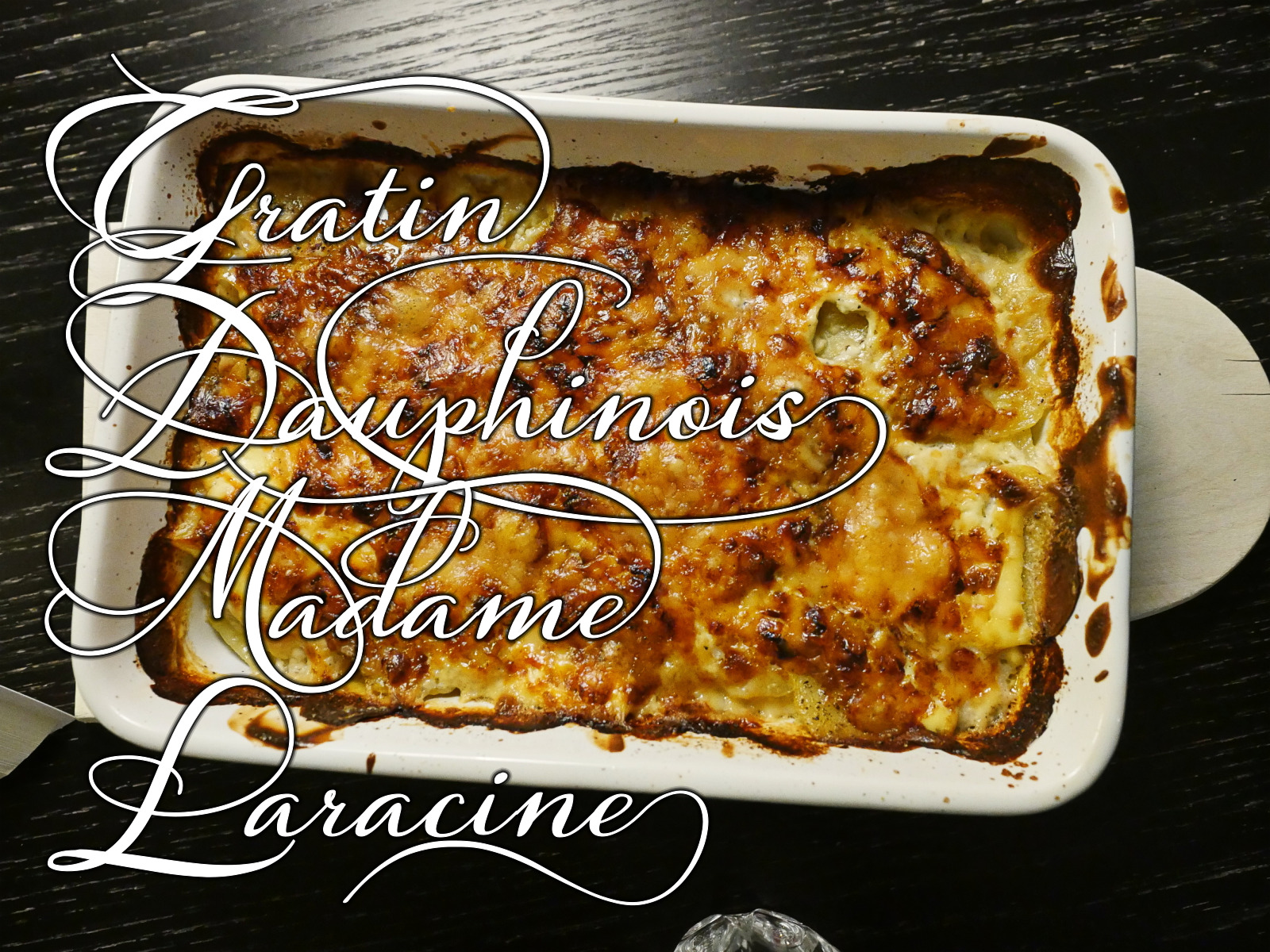 And I cleverly timed the potatoes to be ready at the same time! I did it! Well, OK, the gratin gambit didn’t pay off: It was still inedible (for me), which I take to mean that it was delicious. 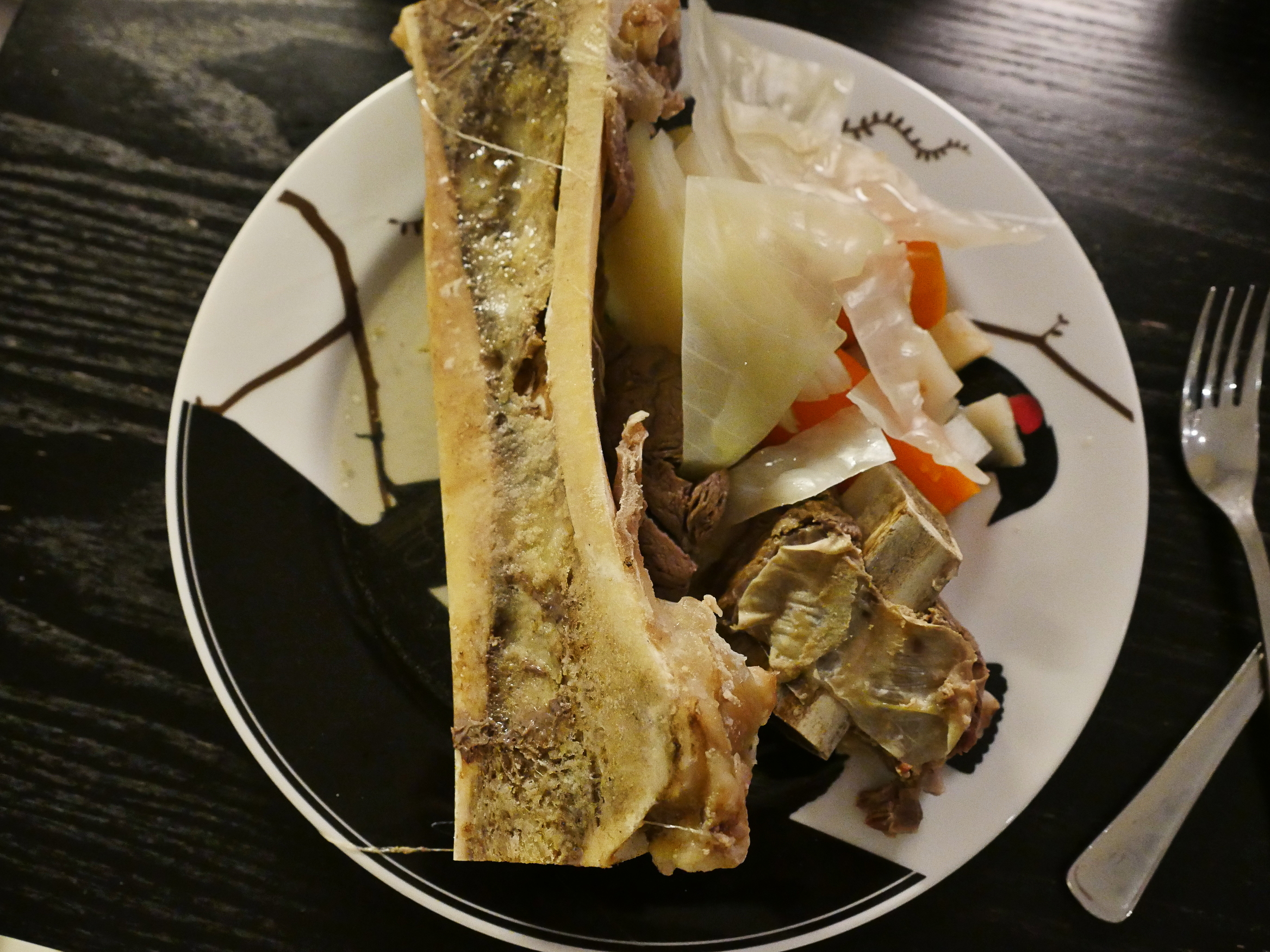 The marrow bones were interesting. I mean, delicious, but interesting because I don’t think I’ve ever had cooked marrow bones before, just grilled. I was afraid that all the marvellous flavour would leech out of the marrow, but the leek did its job: The marrow was still there and so good.

The rest was fine. The meat was super-tender, but a bit on the dry side for some reason. Perhaps I should have gotten fattier pieces? I just took what the butcher handed me.

The broth was very nice indeed. It’s a really fun book to read while eating.

I mean, it’s impossible not to feel a giddy glee while reading it, because Singer does smart, savage takedowns of a large number of people involved with comics criticism (and more than a few creators). His main point is basically that there are currently two main approaches to writing about comics, and both of them suck. There’s the fandom-generated codswallop that refuses to actually criticise anything, and there’s the stuff written by academics that often seem to not have actually read the comics in question, but write about the form/medium/genre (they’re usually confused about that too) in the abstract. The general rah rah atmosphere surrounding comics is tiring, and Singer skewers writer after writer in terms like the above. However, I haven’t actually read any of the stuff he’s giving sick burns to, so it’s difficult to say whether Singer’s full of shit, too. I mean, he does quote some people saying abjectly moronic stuff, but sections like the above makes me go “hmm”. I like a number of works written by Alan Moore, but he’s done some problematic stuff for sure. So I’m not “HOW DARE HE SAY ANYTHING NEGATIVE”-ing what Singer’s doing here, but I just don’t understand Singer’s point here. He seems to be willfully misreading Moore: The From Hell graphic novel was, if I remember correctly, dedicated to the five women who were murdered, so Moore isn’t saying what’s being refuted up there. Moore is making the perfectly uncontroversial statement about how we relate to “Jack the Ripper”, which is by now best modelled as a fictional character.

I think the entirety of Chapter 2 is pretty confused and often unconvincing, even if it’s really fun to see somebody take a chainsaw to Planetary and Kingdom Come. The middlebrow reacts with equal fury to an art that baffles his understanding and to one which refuses to aspire to his level. The first reminds him that he has not yet, after all, arrived (and, indeed, may never make it); the second suggests to him a condition to which he might easily relapse, […] even suggests what his state might appear like to those a notch above.

At first I thought that this perhaps didn’t apply that much any more since nobody dares call anything out for being low-brow any more. But then I thought a bit more: Perhaps it’s still accurate? I mean, you have people endlessly obsessing about middle-of-the-road things like Sopranos or Breaking Bad (and all of the rest of the New Age Of Quality TV crap) and how it’s the New Novel and various absurdeties. It’s a hegemonic position that’s full of angst, because they have to sharply delineate against the “bad” TV (i.e., the things that refuses to aspire to being Serious TV), while also having to defend themselves against snobby art world people.

So I think it’s probably pretty much accurate?

Myself, I love trash and I love art and I hate The Sopranos. Much of the rest of the book is less about skewering other critics than doing analyses of various comics books. This is ostensibly to uncover how badly other critics are reading these works, but it doesn’t read like that’s the reason these chapters were written. Singer gives solid readings of works by Chris Ware, Alan More and Marjane Satrapi, three creators I like, and points out a bunch of problematic things about some of their central works.

But far too often, his complaints seem to come down to, well, that they aren’t, like, nice. Or good. Or something.

For instance, he points out that the central character in Persepolis is rather insufferable (which is true), but then somehow wants that to be a flaw. Reading Singer, he seems upset that that character is full of it, and doesn’t learn anything in particular. I always assumed that that was what Satrapi wanted to do, but it’s possible that she’s as oblivious as to that as some of the critics Singer quotes that valourises the character.

It’s the same with his reading of Ware and Moore: Their works are as ideologically iffy as Satrapi’s, but… so?

The final chapter I couldn’t make it all the way through, because it’s all about Kyle Baker’s Nat Turner, which is Baker’s least interesting book, and one I probably didn’t make it all the way through. It’s b-a-a-a-d, but not even interesting enough to make me want to read a take-down of it. I mean, it was fun to see Singer do that with works I have an interest in, but Nat Turner?

This blog post is part of the Bistro Cooking & Books series.