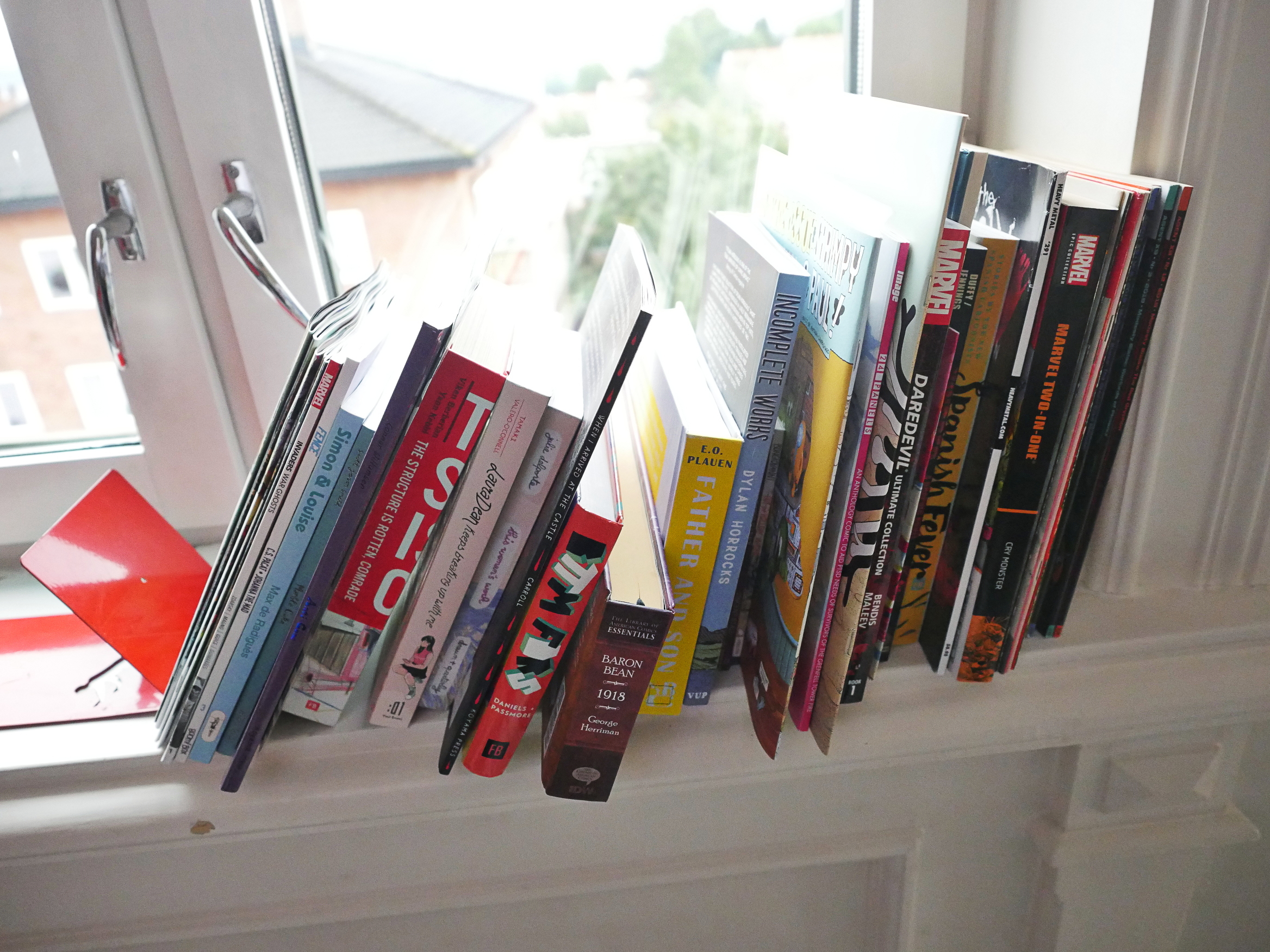 OK, I got more comics, but this week I’m going to finish the Window Sill Of Comics for sure for sure and finally bring this blog series to an end.

As usual, just reading, no reviews, because there’s just no time. 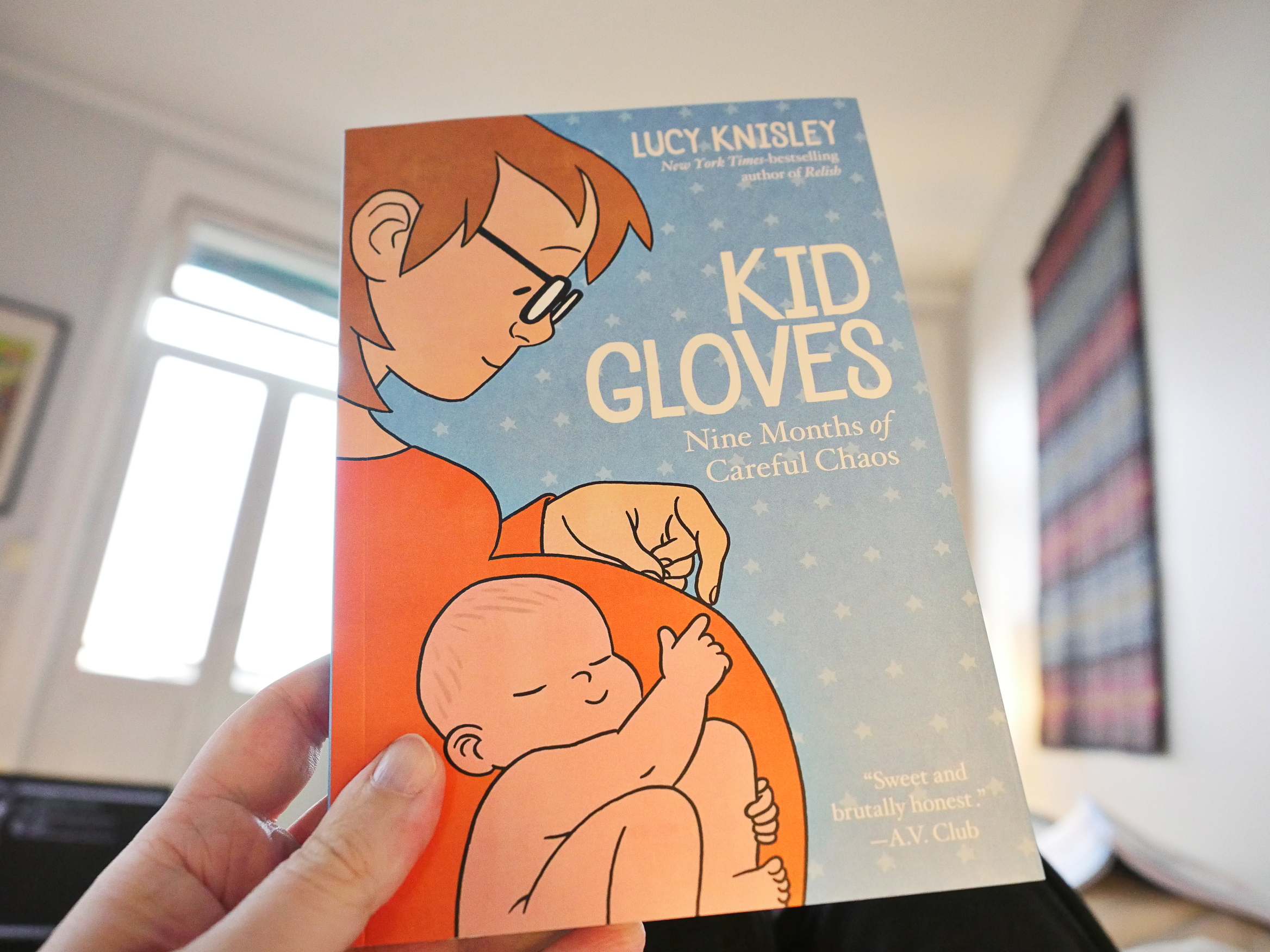 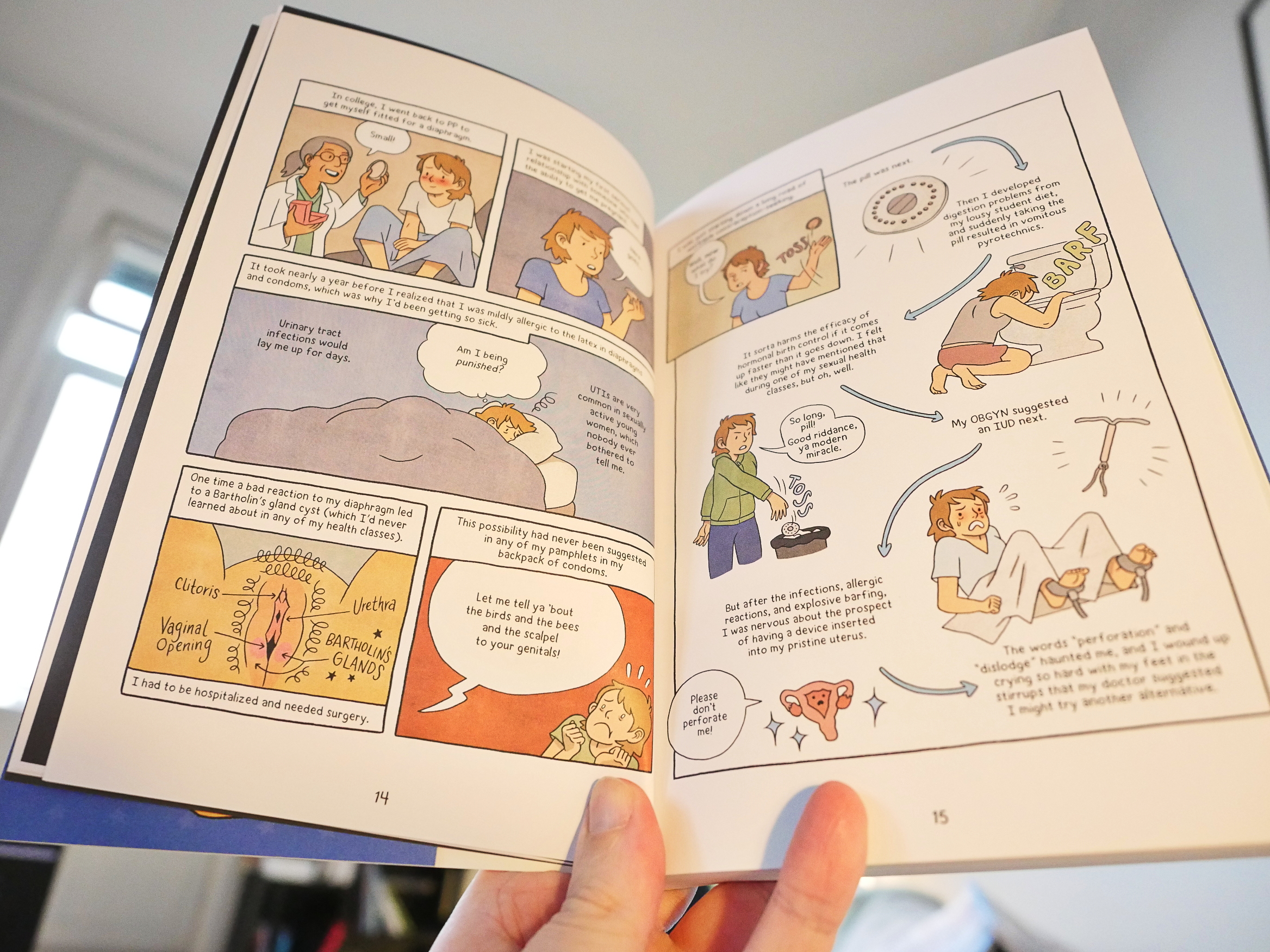 I have rather sworn off First Second because their books suck, but I rather like Lucy Knisley, so I thought I’d give this book a go despite the publisher. 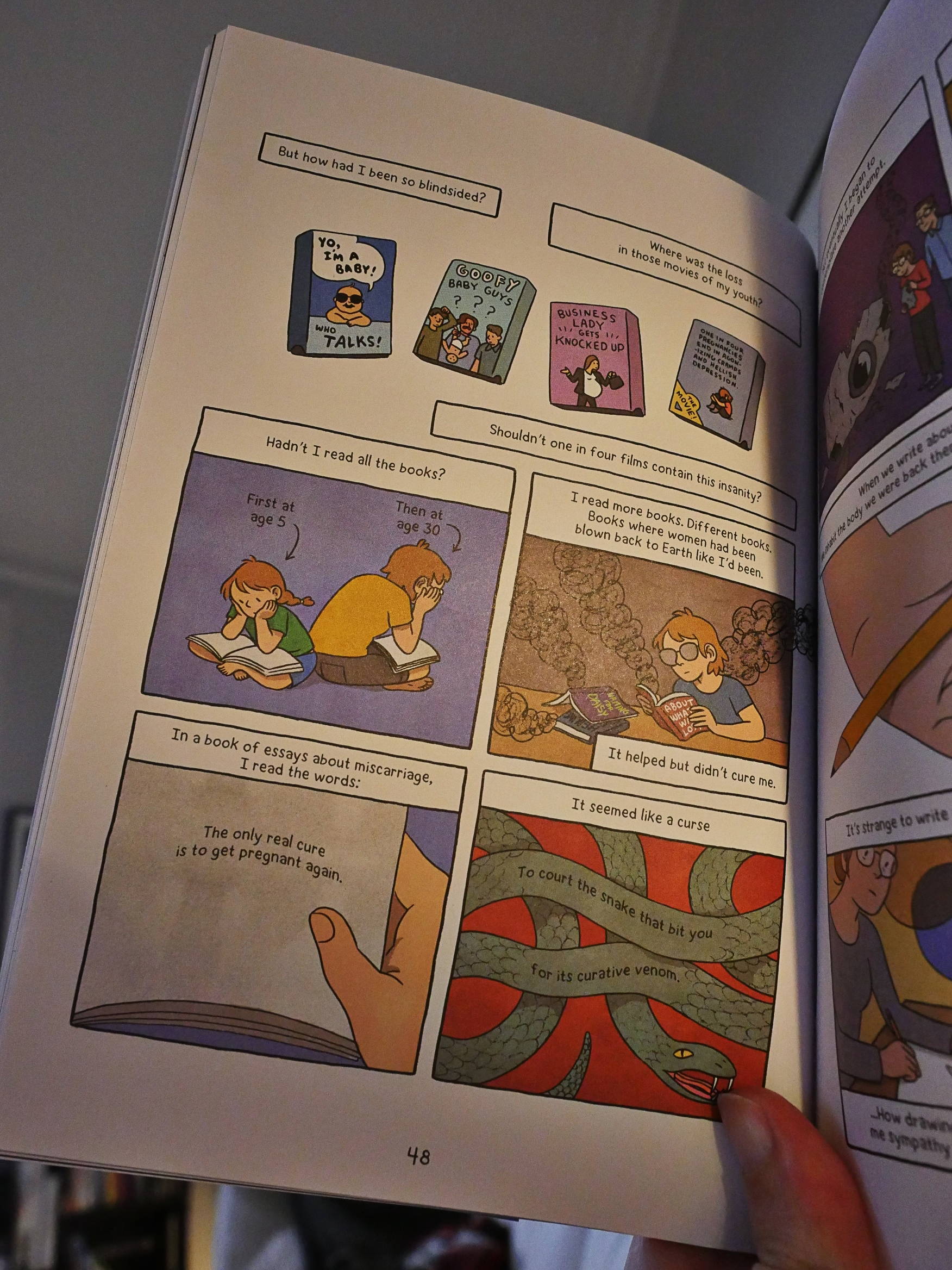 My problem with this book is that Knisley spends so much time on things that even I know. She is, for instance, blindsided by how common miscarriages are, and I thought absolutely everybody knew that pregnancies routinely end spontaneously. Perhaps it’s something that’s kept as a closely guarded secret in the US or something? 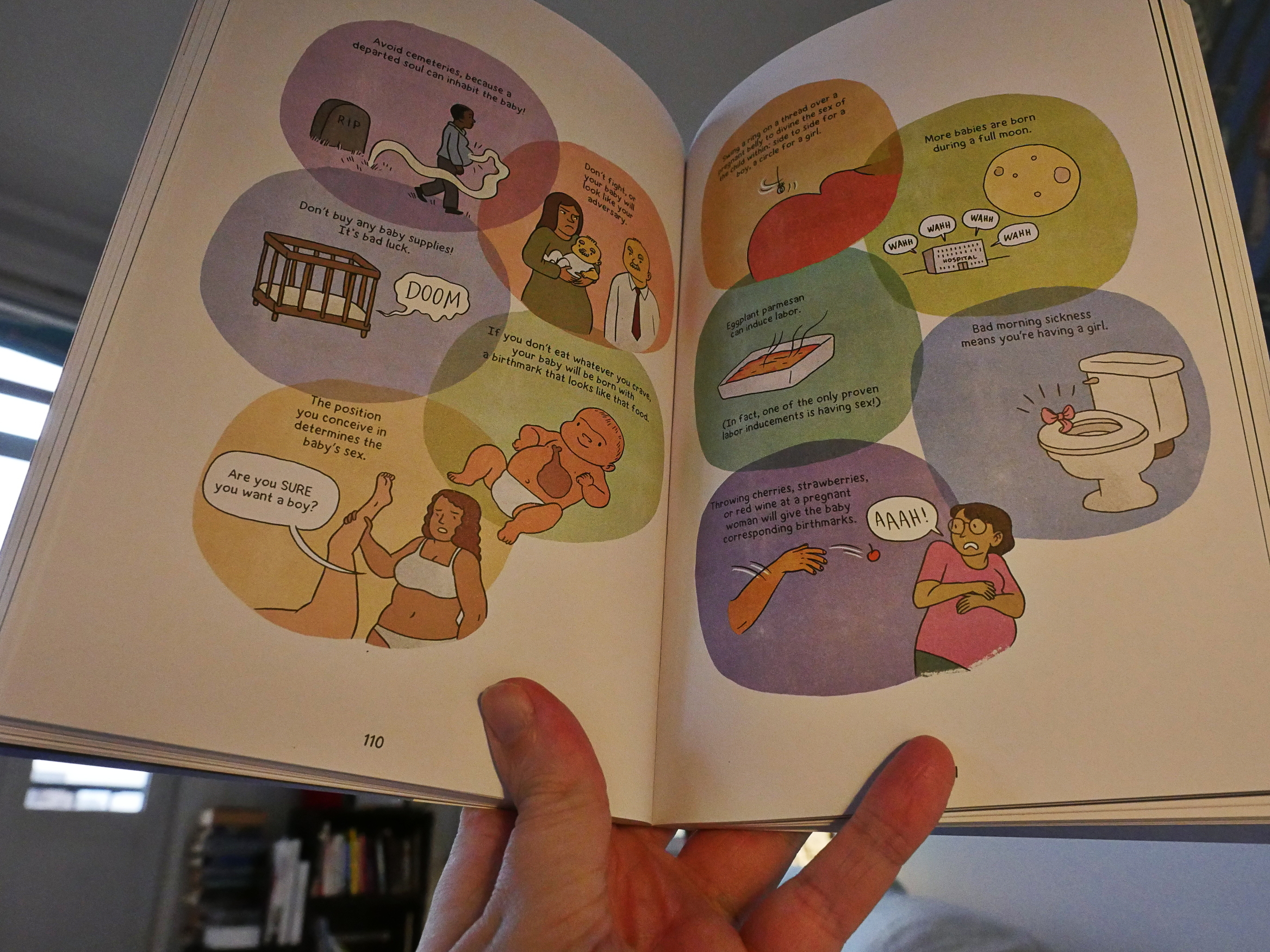 And she spends pages and pages on dispelling myths that are completely moronic, which makes for a deathly boring reading experience. 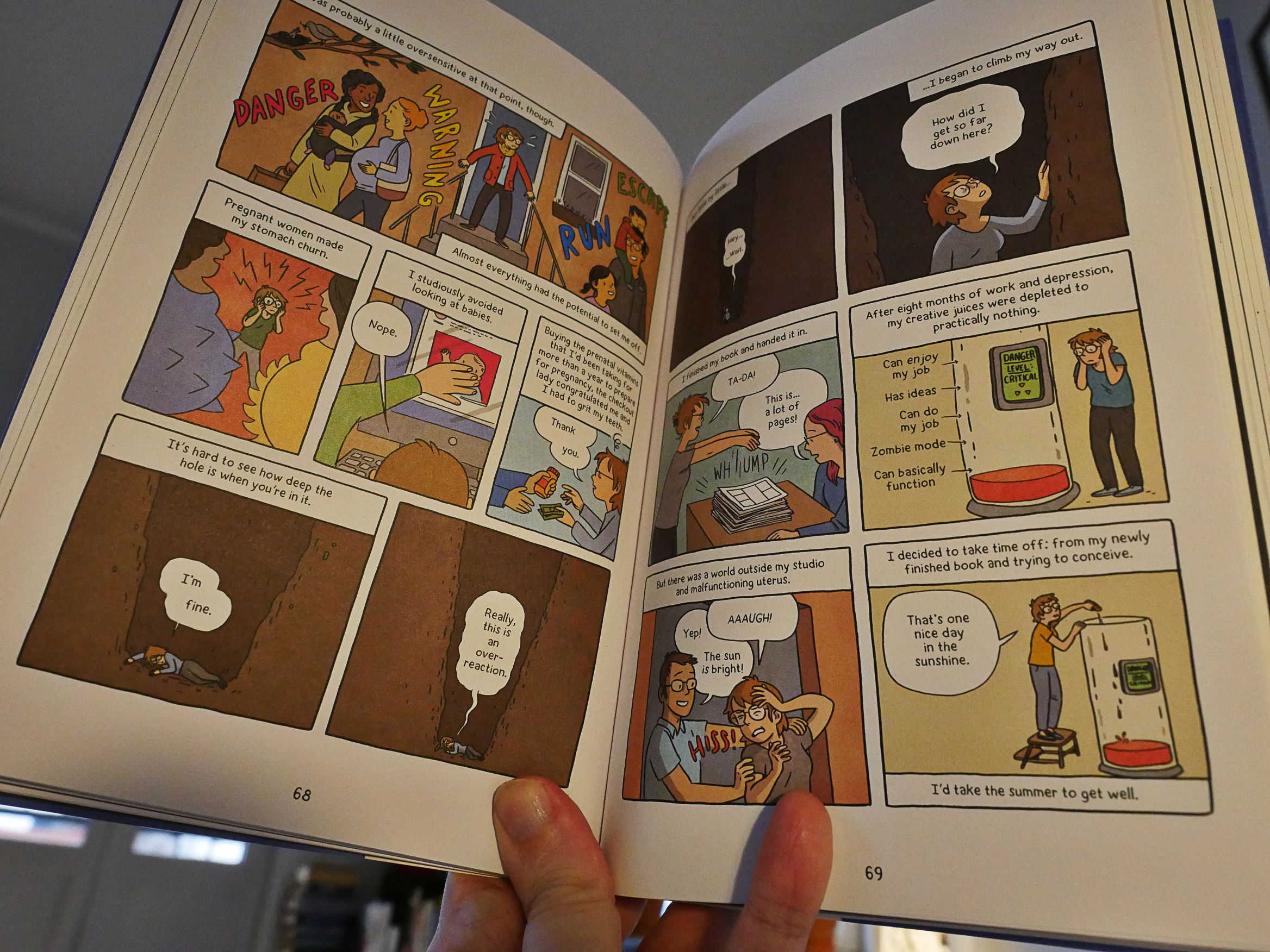 And when she’s not explaining things that you’d hope nobody would have to have explained to them, she resorts to these trite metaphors.

That said, the final part of the book is harrowing and exhausting and had me crying a bit, so Knisley still has it, but I don’t know what she was thinking when she made the first four fifths of this book. 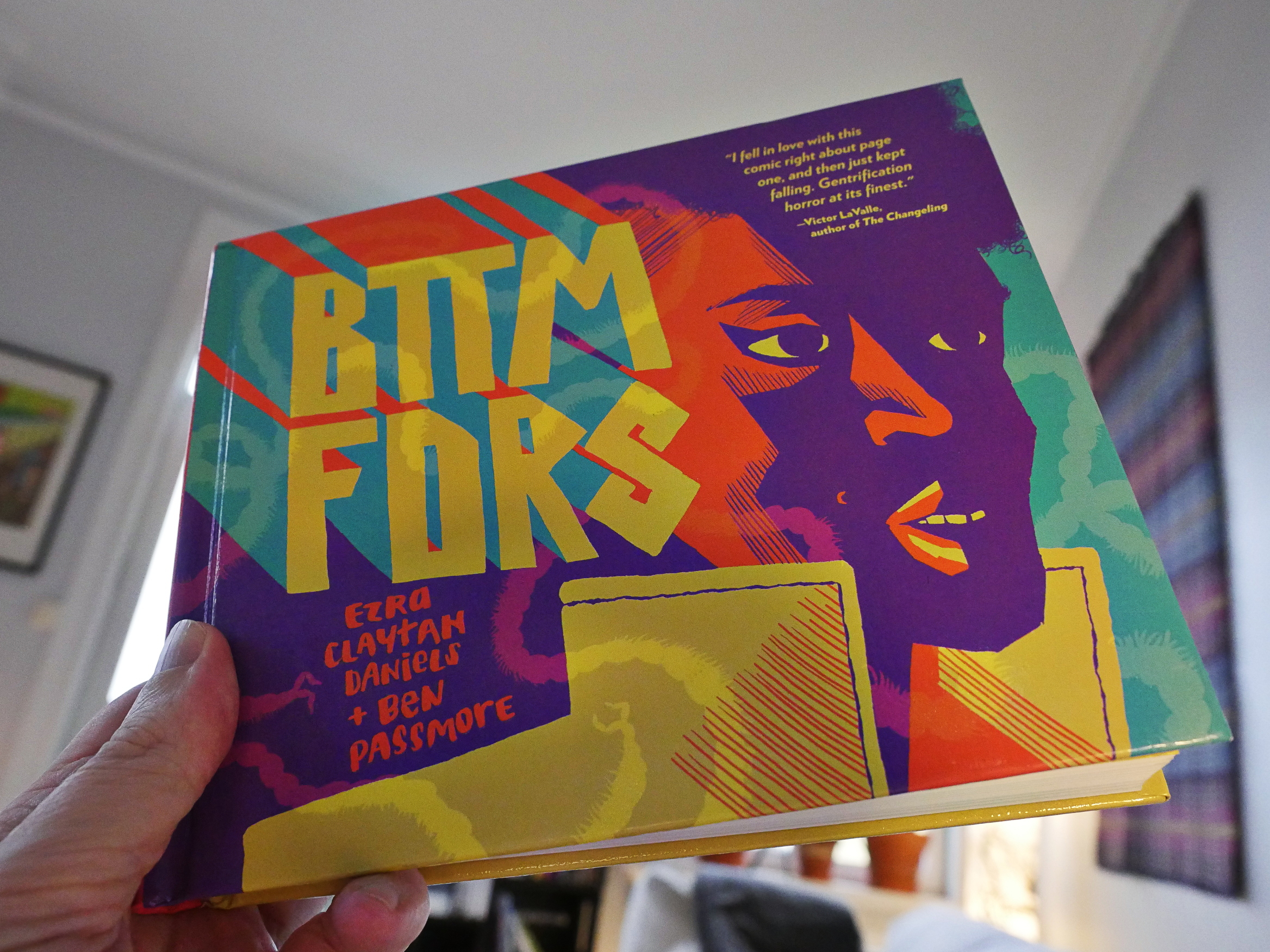 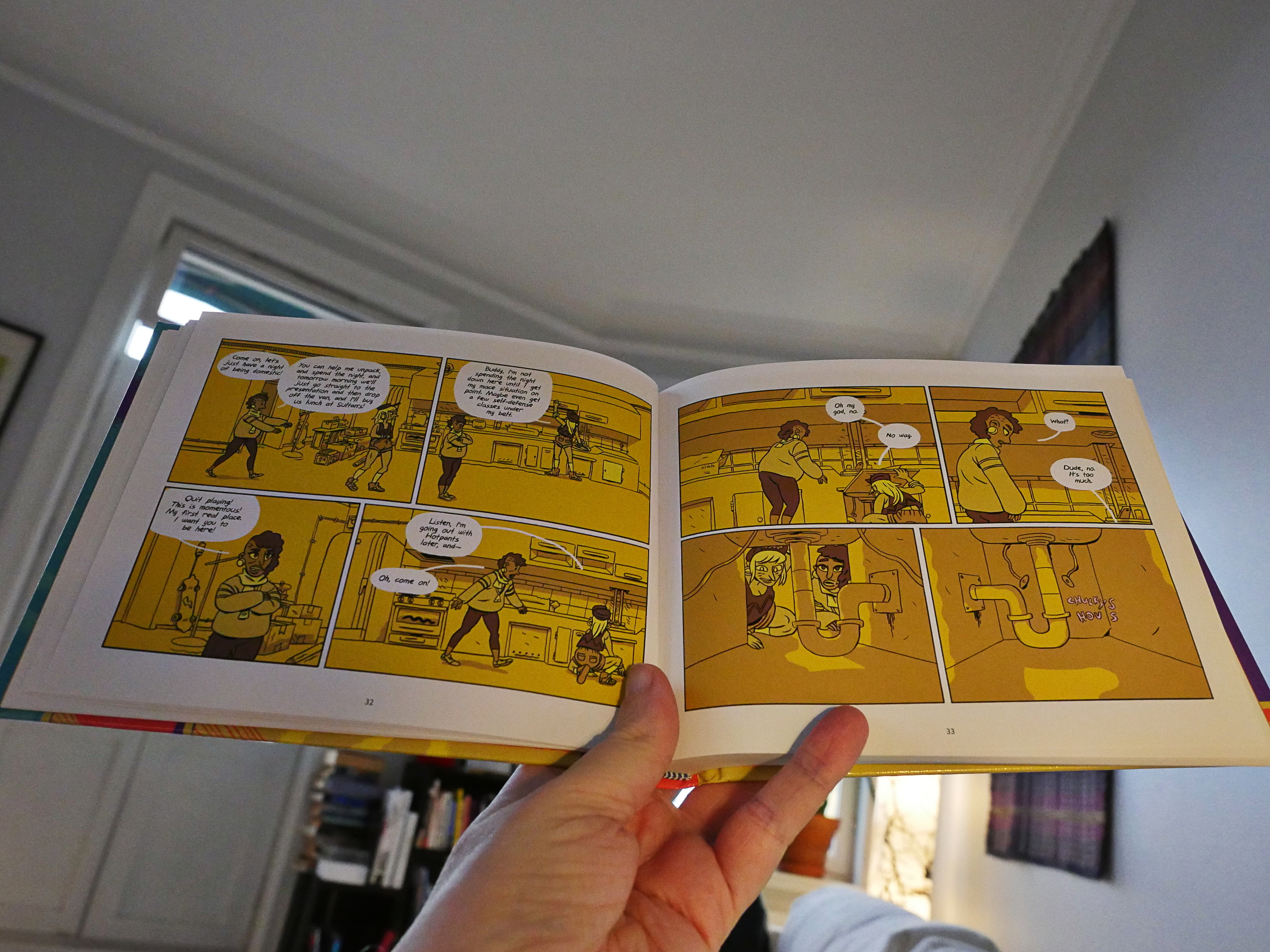 I don’t know what I expected this book to be. Passmore has mostly done kinda earnest real life comics before, I think?

This isn’t that: It’s a horror movie in papery form. 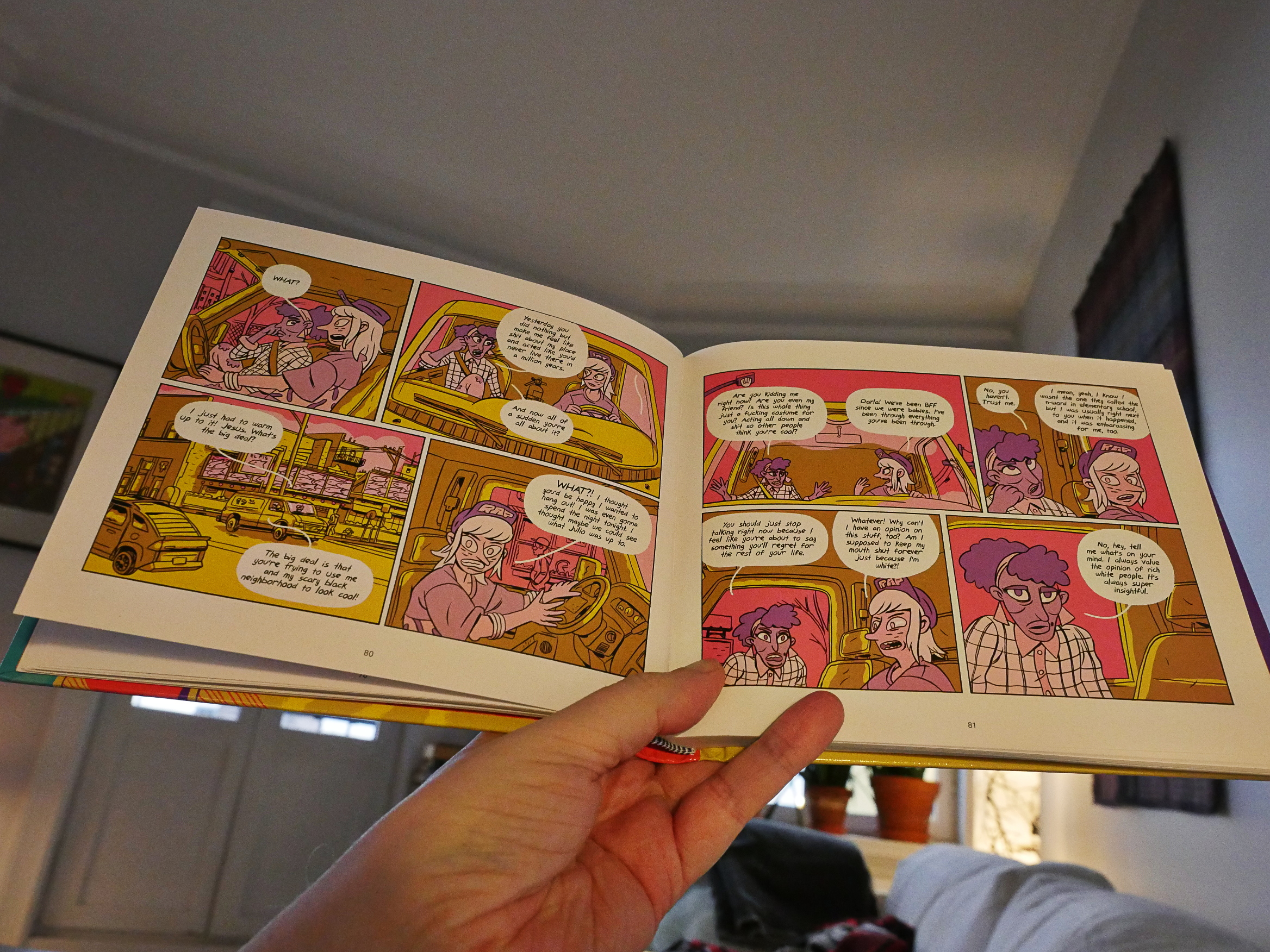 There’s scant use of the comics medium here, and I wonder whether the author originally wrote this as a movie script?

In any case, despite my misgivings reading this, it turns out to be chillingly effective; weird colouring and all. As befits a classic horror movie, it’s claustrophobic and intense, and while there’s nothing really new here, it’s one of those very rare comic books that is actually scary. 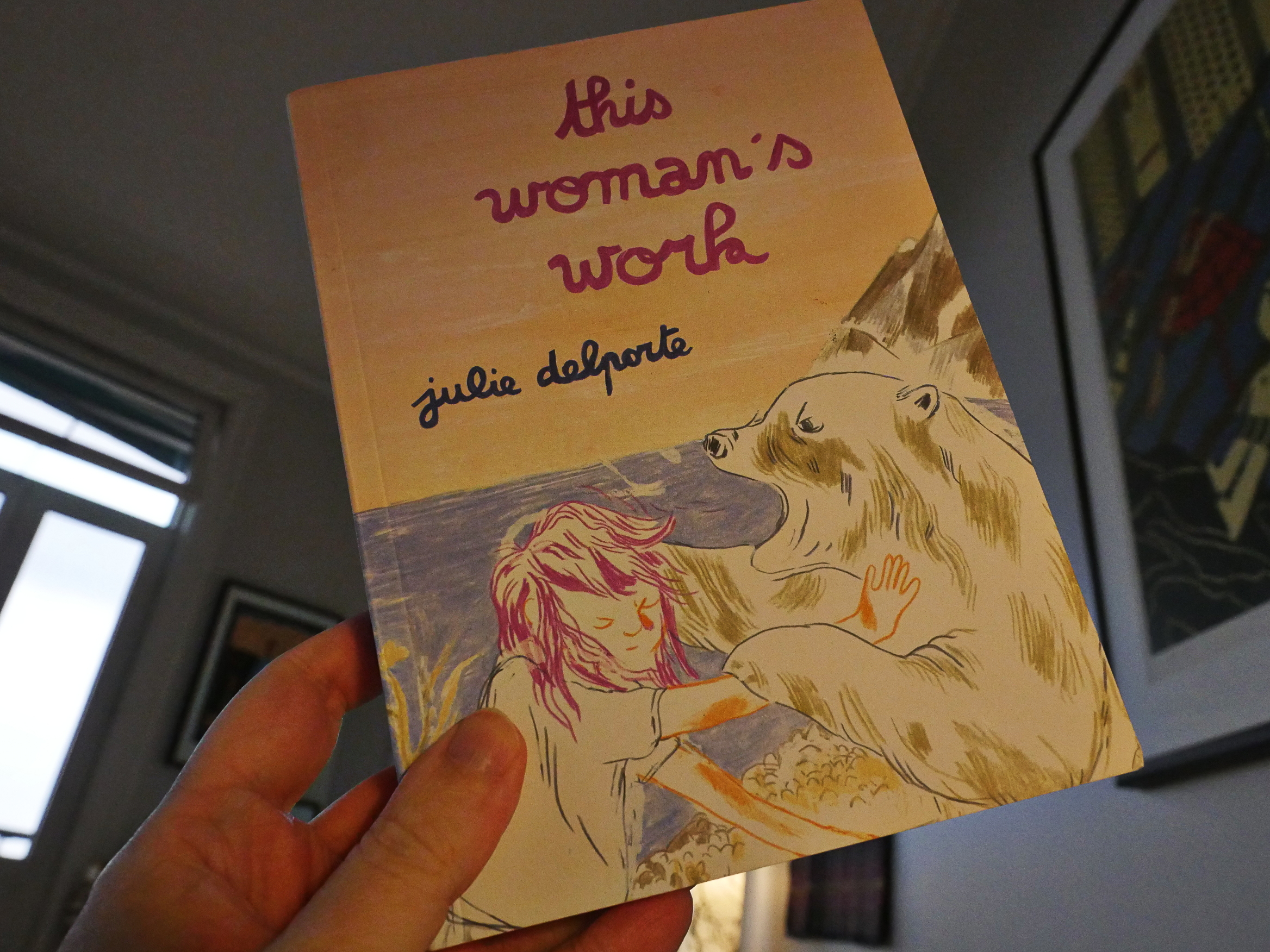 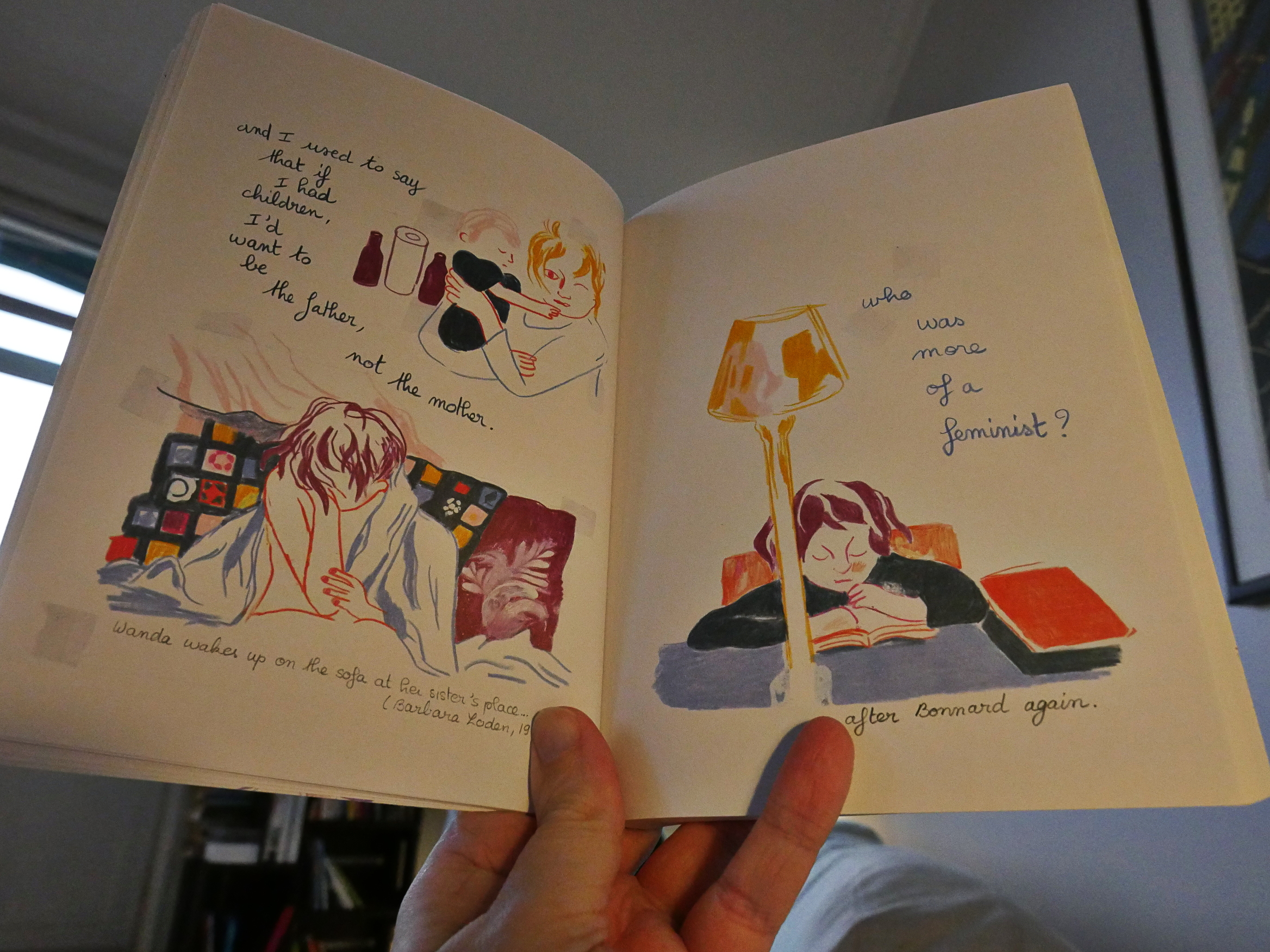 I really enjoyed Delporte’s previous book, Everywhere Antennas, and this looks even lovelier. 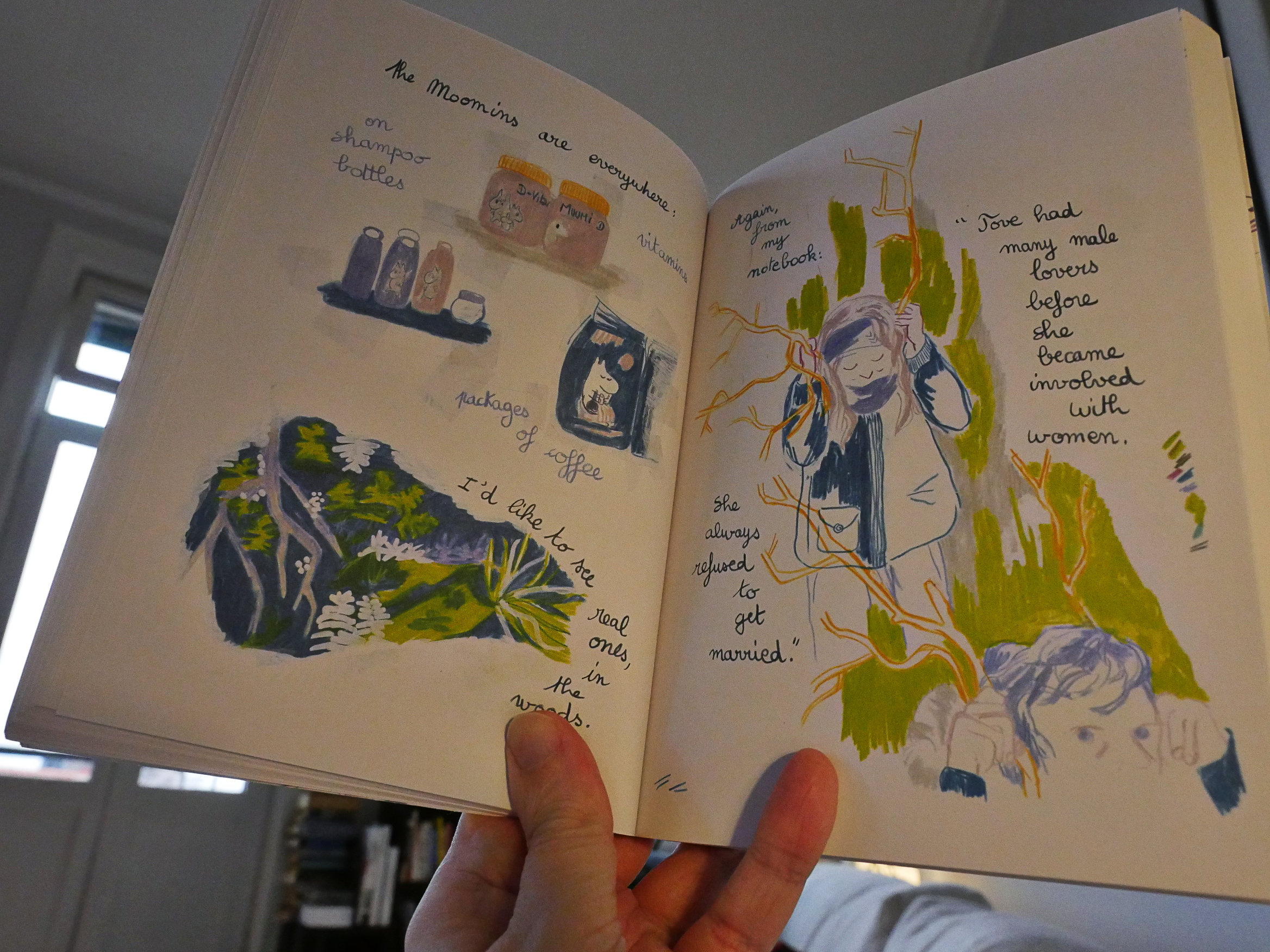 Full of collages and drawings and paintings; very contemplative. I definitely see what she’s going for with the flowing structure and circling back on the same issues in a spiral, but I don’t think this book was as successful as the previous one. It’s something about those footnotes that makes the reading kinda choppy?

The ending is heart-stopping, though. 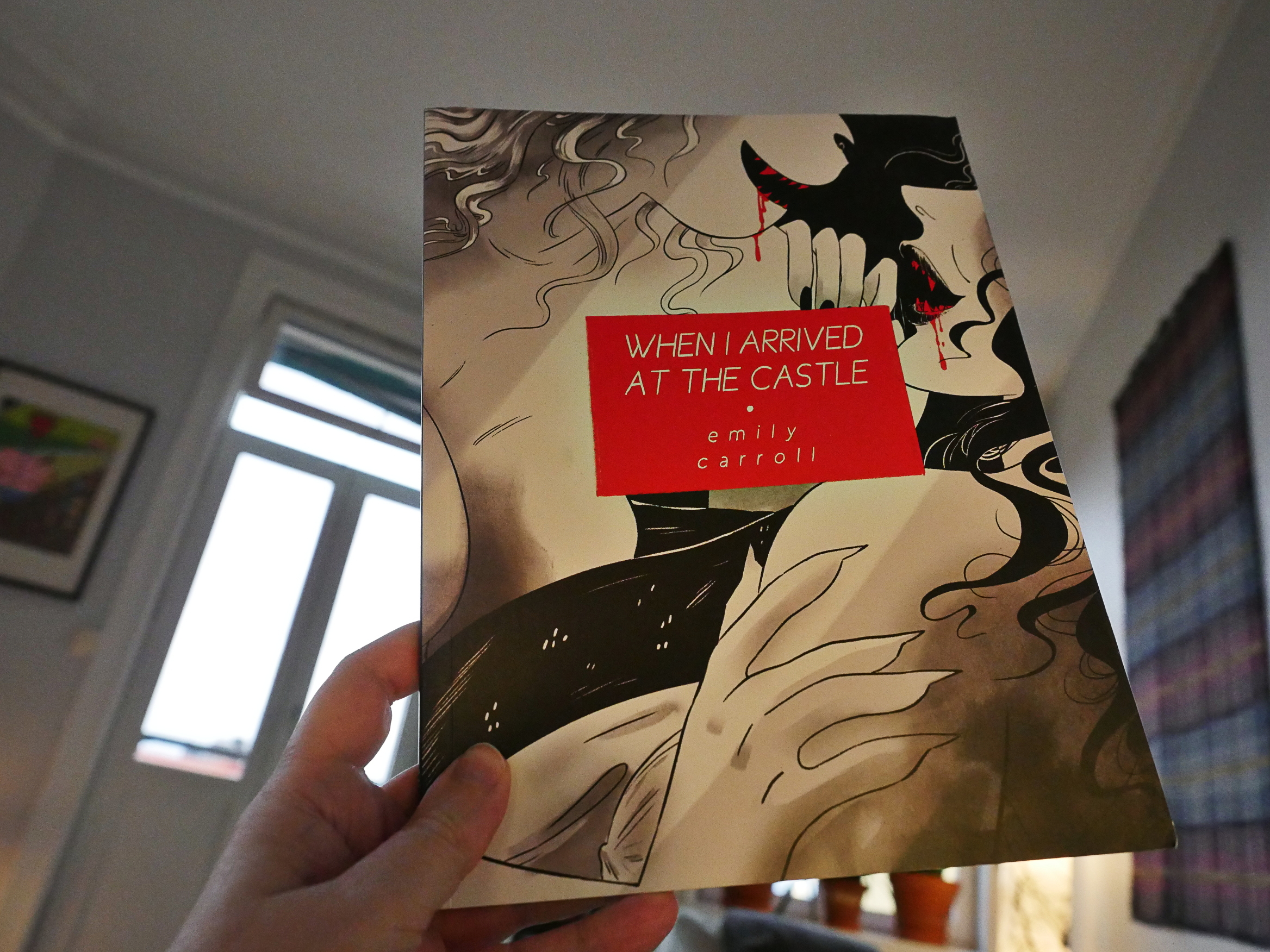 When I Arrived at the Castle by Emily Carroll (Koyama) This is published in a format that’s quite unpopular now: The album-ish one with soft colours. I really wonder why they did that: The lettering is so big and there’s so little per page that I’m wondering whether Carroll made this for a smaller format originally. But I guess these bloody images have a certain impact on the larger pages.

I found it hard to get into this. Invaders by Lots of People (Marvel) Chips Zdarsky’s Marvel career trajectory has been pretty typical: His first few comics were fun and were overflowing with ideas.

I think it’s time for me to stop buying his comics. Yeah yeah, OK. I was an X-Men fan as a child, and I’ve sorta-kinda dipped into the stream of X-Men effluvia the last few years. I thought they had something interesting going like four (?) years ago, but whenever I’ve tried reading it since then, it’s been “eh? eh? what? does this make sense? why is this so boring?” So this is the new X-Men start (I think?), and as usual I have no idea whether they’re just dropping us into all new concepts or whether this had all been set up earlier, and I’m just not aware. Apparently all previously dead mutants are now alive again? OK, I can roll with that. These comics are more entertaining than what X-Men comics I’ve read over the last couple of years, but the storytelling is a bit clunky in parts. Like here where we learn that Moira is “reincarnated”, but it turns out that her mutant power is really Groundhog Day. SO CONFUSE! It’s got sci-fi scale, which is refreshing.

I have no idea whether this is all going to turn out to be an imaginary tale or something. I think we just learned that all previous incoherent X-Men storylines were just MacTaggart’s Groundhog Days, but perhaps that’s also just an imaginary tale. You never know, and I don’t particularly care. Oh, yeah, this was included with the issue of Tongues. It was hidden between some other stuff on the window sill. Out of Hollow Water by Anna Bongiovanni (2d cloud) This is an unnerving little booklet. Bongiovanni’s smudgy pencils somehow makes sense in this tale that somehow seems to make sense on some deeper level, although I’m not quite sure what it’s about. It’s scary and affecting.

Aand… with that I think this day is over. More comics tomorrow! Only three-ish more days to go?

One thought on “Comics Cavalcade Day 9”