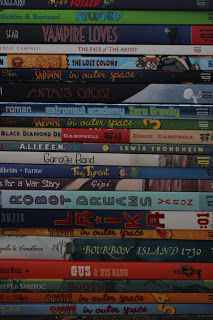 For years I’ve wondered why the everything First Second publishes sucks.  Or it’s by a really good artist, it doesn’t quite suck, but it’s definitely the worst work that that artist has done in his or her life.

When First Second was new and shiny, I routinely bought everything they published, and then my reaction would ususally be “well, that wasn’t as good as I thought it would be”.  But next month, I’d read the description for the next batch of books, and off I went again.

I didn’t really see the pattern until a few years had passed.

“Hang on. That kinda sucked. It sounded good before I read it.  And it was by , who I kinda like.  What’s going on here?”

Slowly, slowly I began to suspect that the problem was with the publisher First Second.  Did they just have bad taste?  Did they brow-beat the artists?  Did they have bad body odour?  What?

And now, finally, the truth is out.  Their books suck because they suck:

The process wasn’t my ideal way of working. I had to type up a complete script and get it approved before I could draw a single line. I don’t think that’s the way most cartoonists work. Our scripts are often like storyboards, right? The process of having to write out a description of a place or a character or an action that could easily have been depicted in a sketch made things needlessly complicated and time-consuming.

So they leach all spontaneity out of the work by having a process designed to allow the editor to really edit the hell out of whatever makes that artist odd, challenging or great.  As horrible as that is, they don’t even follow through:

I had been ready to work on it non-stop, but weeks would go by and I wouldn’t hear from him so nothing would get done. My book was clearly not a priority in his life — which is fine, but it was just so inefficient. I wrote to First Second a few times because I was concerned about losing so much time, and they insisted I had to go through this process.

If they contract a book from somebody as spiffy as Richard Sala, why on Earth wouldn’t they let him get on with it?  Sala is very consistent.  He’s going to do his thing, and that thing is awesome.  He writes funny and quirky and scary stuff, and his art is just beautiful.  But:

But because getting that initial script approval had taken so long, and we had fallen so far behind, I had to rush on the art much more than I would have liked. I still can’t look at some of the pages. 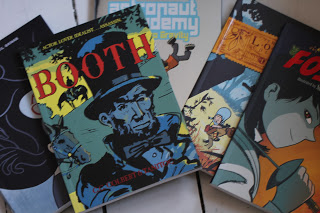 And then there’s the cast-offs, like Refresh, Refresh.  It’s based on a short story originally published in the Paris Review, where I quite enjoyed it.  In the comics version, it read like a discarded, badly written independent movie.  Guess what?  The script was based on a movie script that wouldn’t sell. 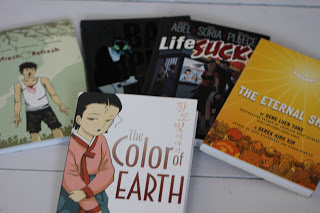 Rooting through the bookcases for more egregious examples, I happen upon The Color of Earth, which may be the most dire comic that’s ever been translated into English.  This Korean cutesy growing up tale had me so disgusted I almost threw it into the recycling.  These guys express my hatred perfectly, so I won’t vent further.

There we are.  Mystery solved.  They suck because they suck.

And now, perhaps, I can finally end the cycle of “oh, that sounds quite interesting”/”eww?” that’s been rolling lo these many years.

3 thoughts on “Why Does First Second Suck?”