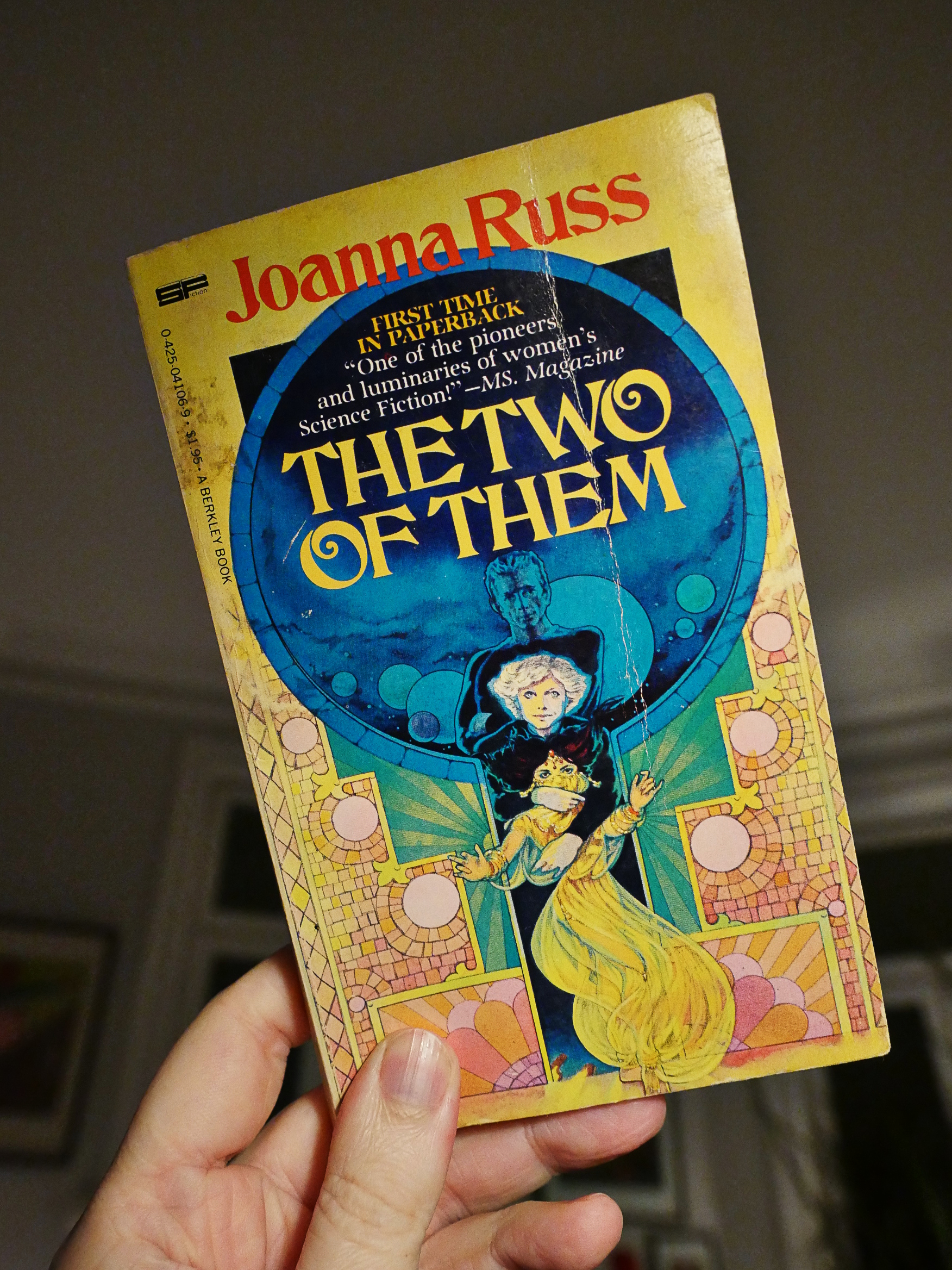 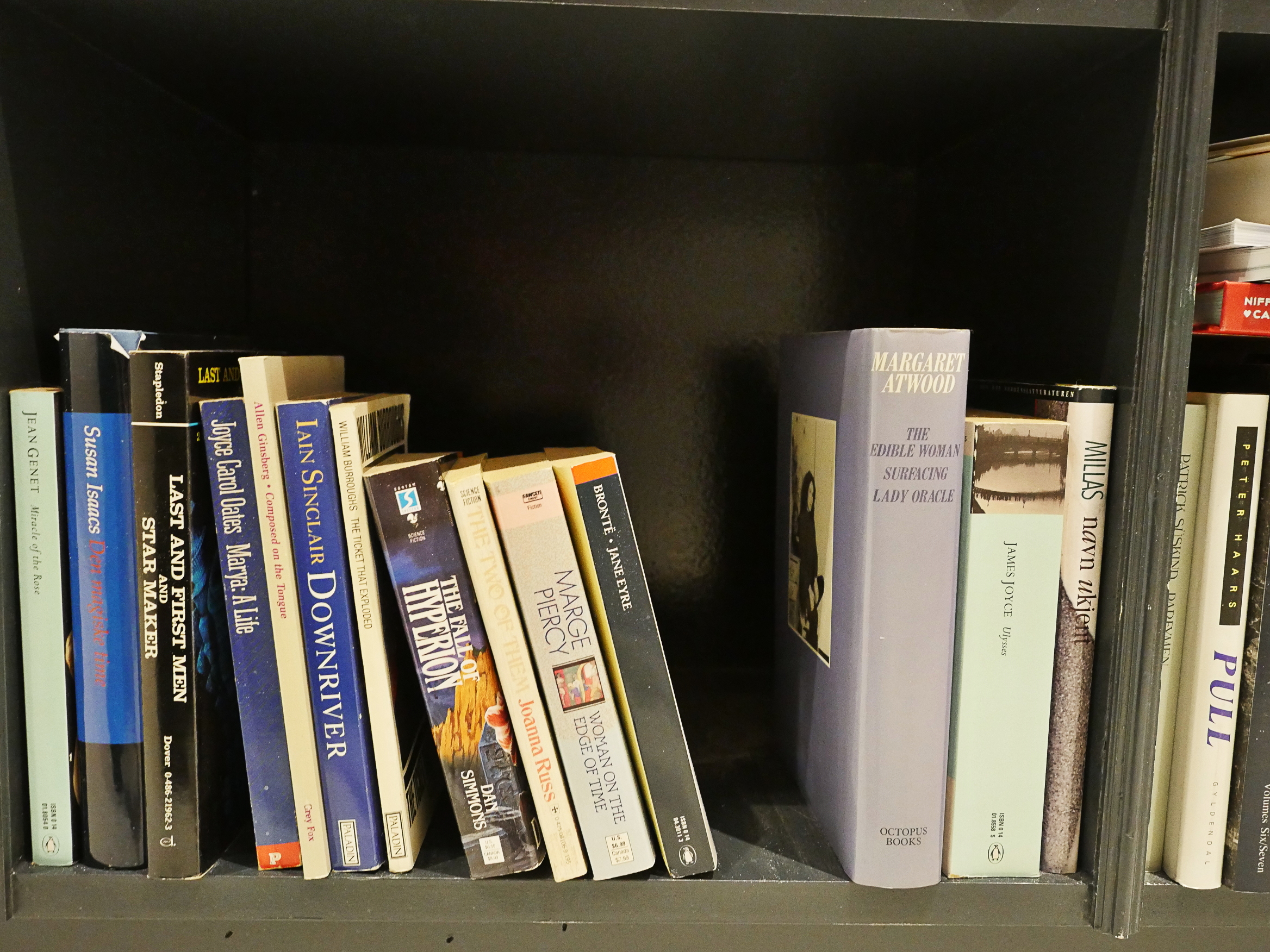 It’s Thursday, so I have to pick a book to read. Hickory dickory…

I choose The Two of Them by Joanna Russ.

Many of the books I’ve apparently avoided reading for two and a half decades have good reasons for not being read. This is not one of them.

I bought, at the time, all the books that Joanna Russ had written, and over the years (I try to avoid reading too many books by the same author in a short time period), I’ve read them all except this one.

I’ll let you read the first three pages before I comment. 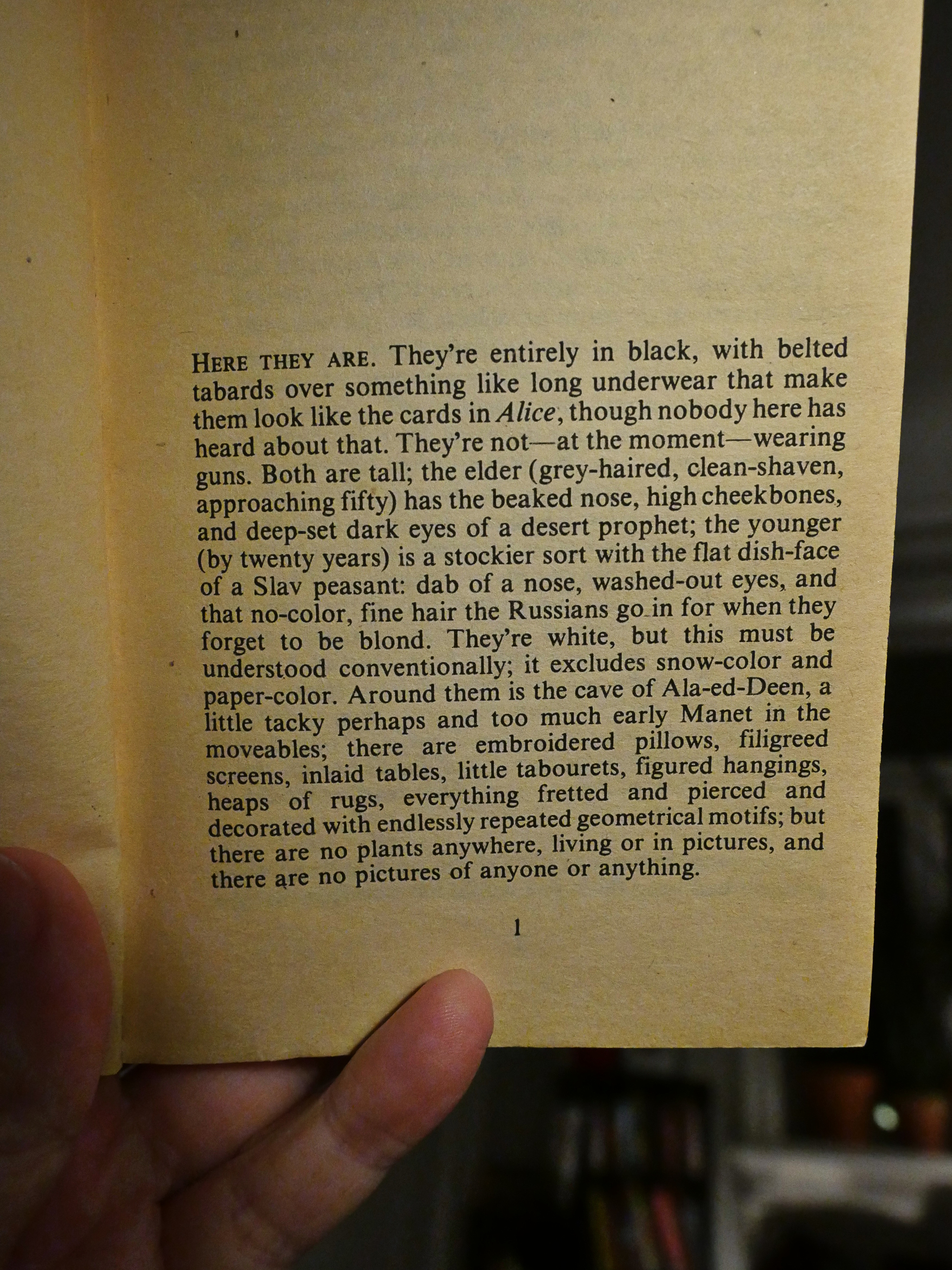 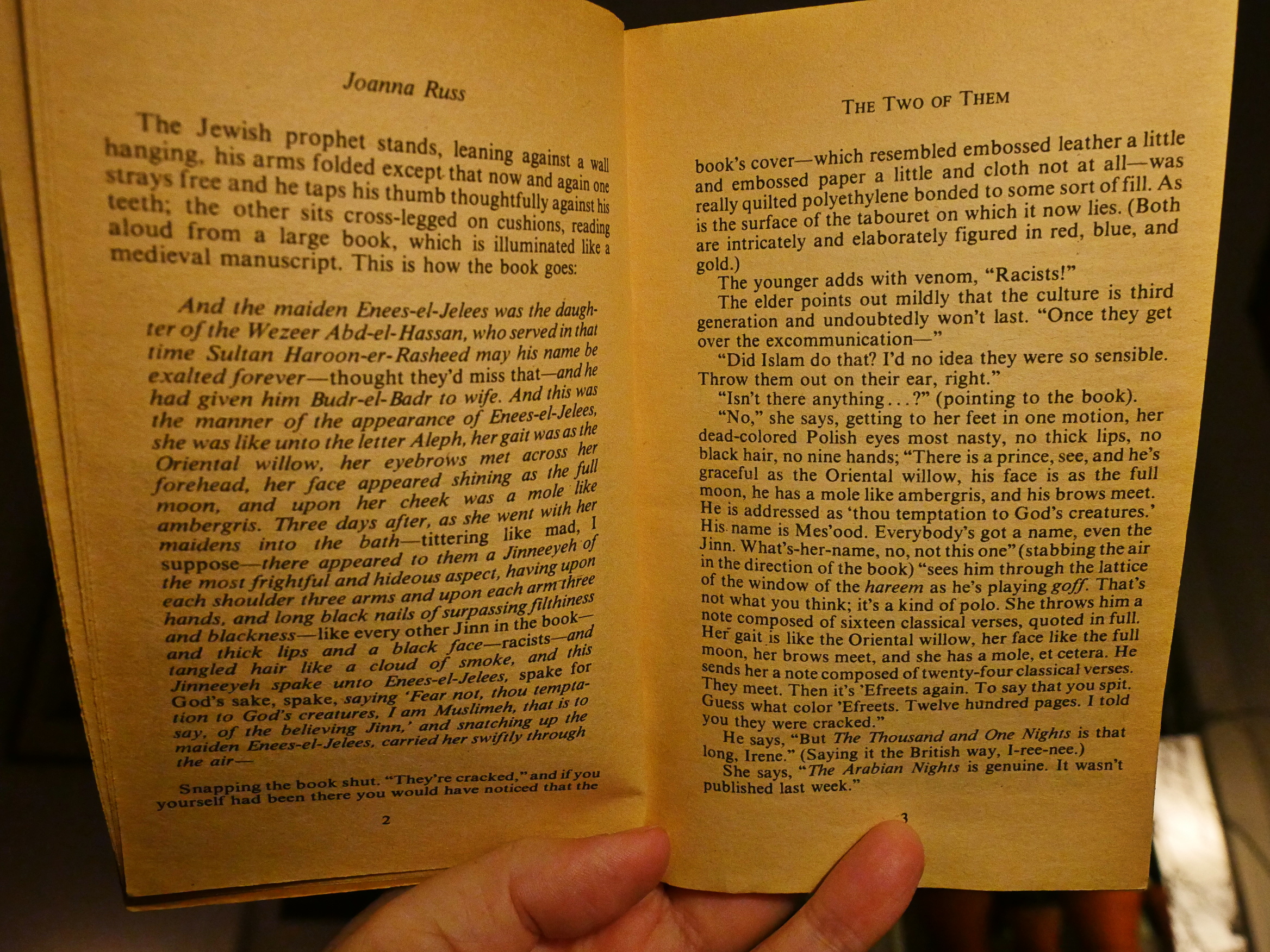 So this is a typical 70s Joanna Russ book: It’s science fiction, it’s funny, it’s scathing, it dumps you straight into the storyline and lets the reader catch up the best they can.

Russ was a part of the new wave of sf writers in the 70s that wanted to bring the genre forward literally. Literally forward? I guess as part of this cohort were Octavia Butler and Samuel Delany and… Uhm… I forget. Both Butler and Delany are, of course, major favourites of mine, and I’ve read all their books, some of them several times. Delany even had a major, major best seller in Dhalgren (although I would guess it sold 10x as many copies as were read). 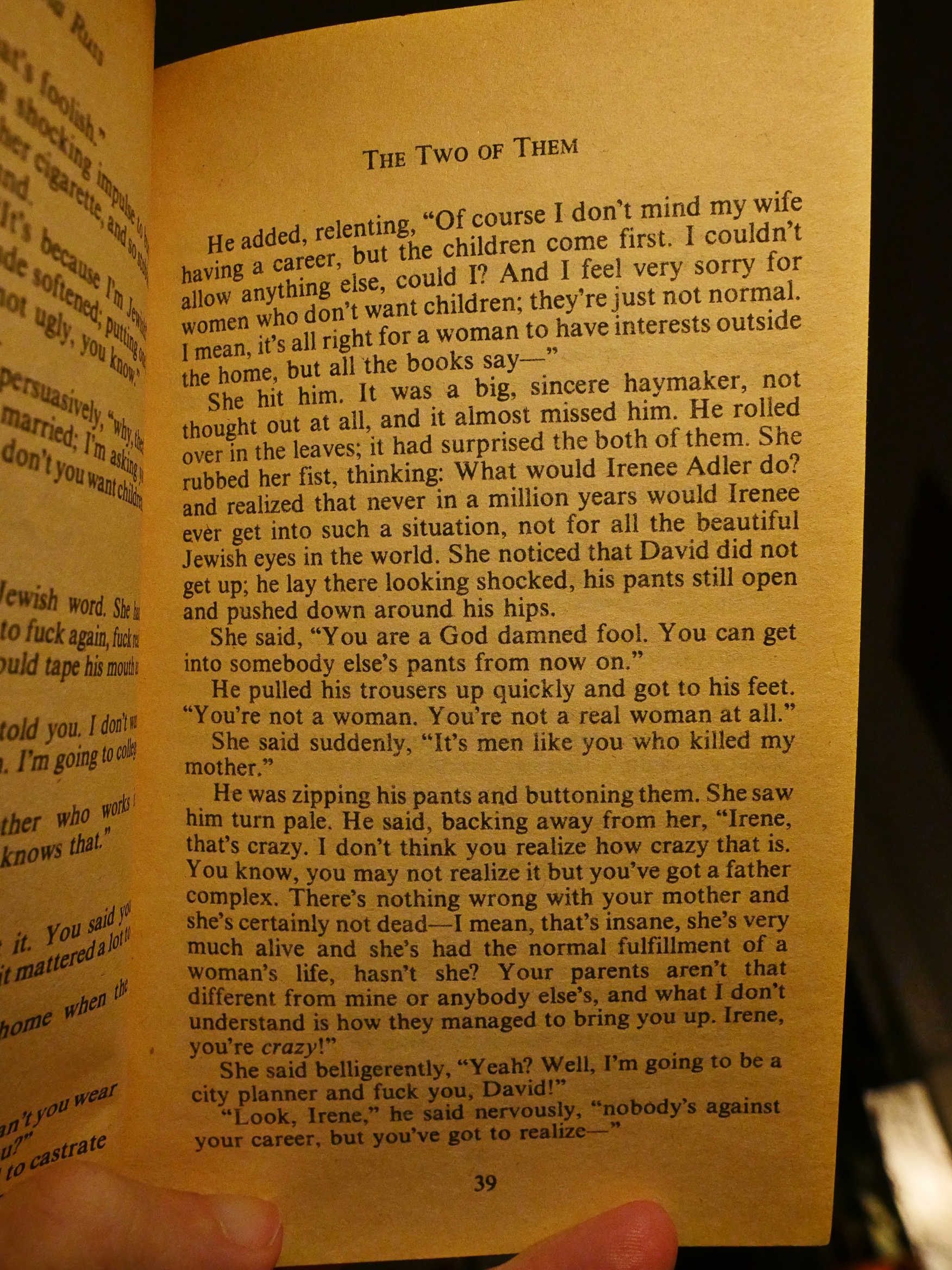 This is a quite straightforward sf novel, though. Two interplanetary agents go to a backward planet to er do something, and that’s as standard an sf plot you can get. The planet they go to here is basically Saudi Arabia, and Russ doesn’t so much try to file the serial numbers off as stamp them all over each page. There’s great glee to be had seeing Our Hero (or is she?) putting all those stupid misogynist ka’abalites in their place.

Which, of course, means that this book Would Be Frowned Upon By Twitter these days. Tsk tsk orientalism tsk tsk colonialism. It feels downright naughty to be reading this book. 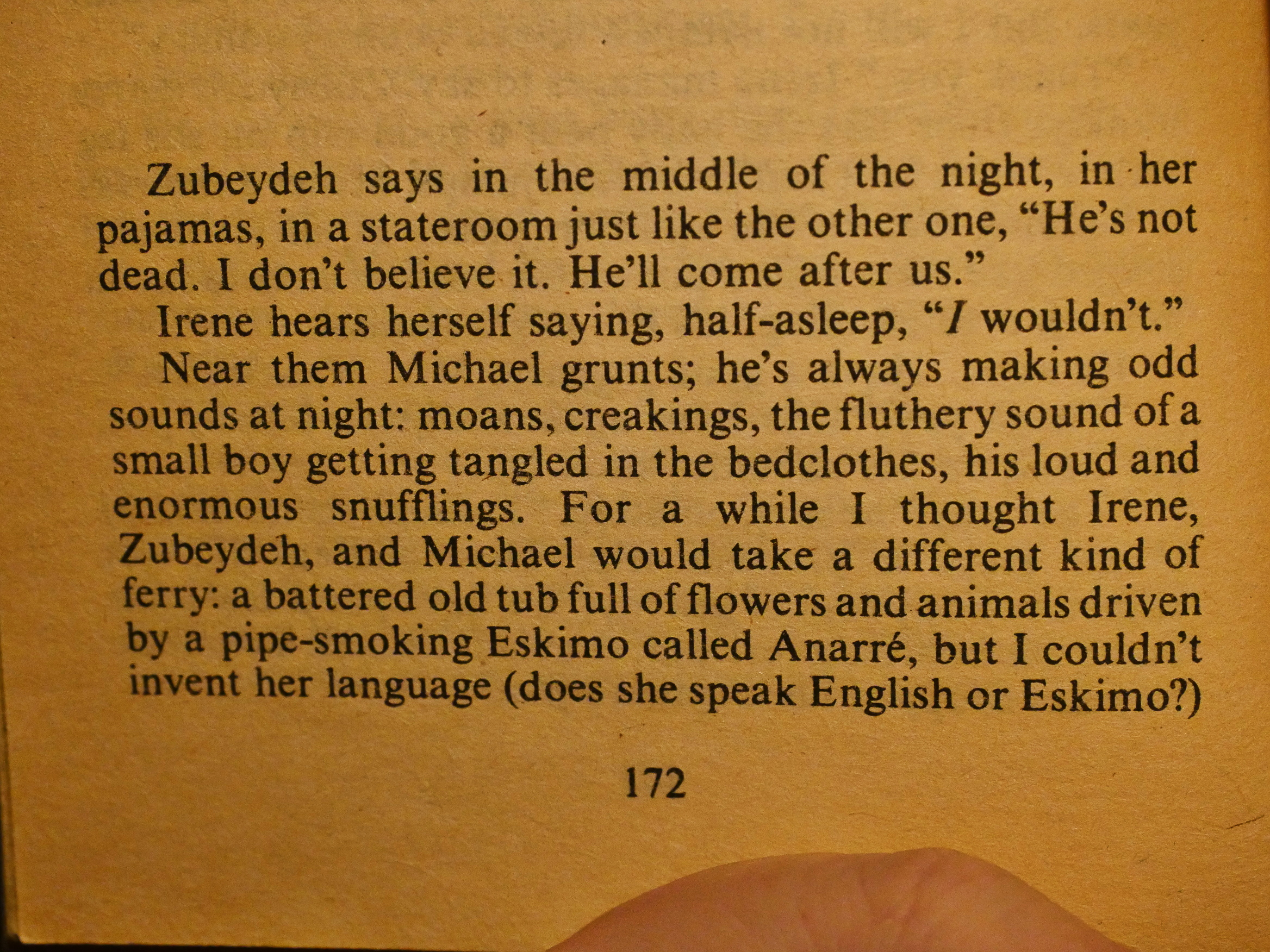 The author gets involved at some points, imagining other ways the book could go. And it doesn’t really go where you’d think. It’s a thrilling reading experience, and Russ’ deft skill at confusion/anger is something to behold.

And now I’m sad that I have no further Russ books to read. She’s stopped writing now, right?

But I was gonna bake something. Let’s see… how about kransekake, which, in English, is called kransekake. English is such a rich language.

Or do I mean depraved? Deprived? All of them?

Anyway, the recipe is trivial: You mix almonds, sugar and egg whites and put it in the oven. However, there’s like some manual labour involved. 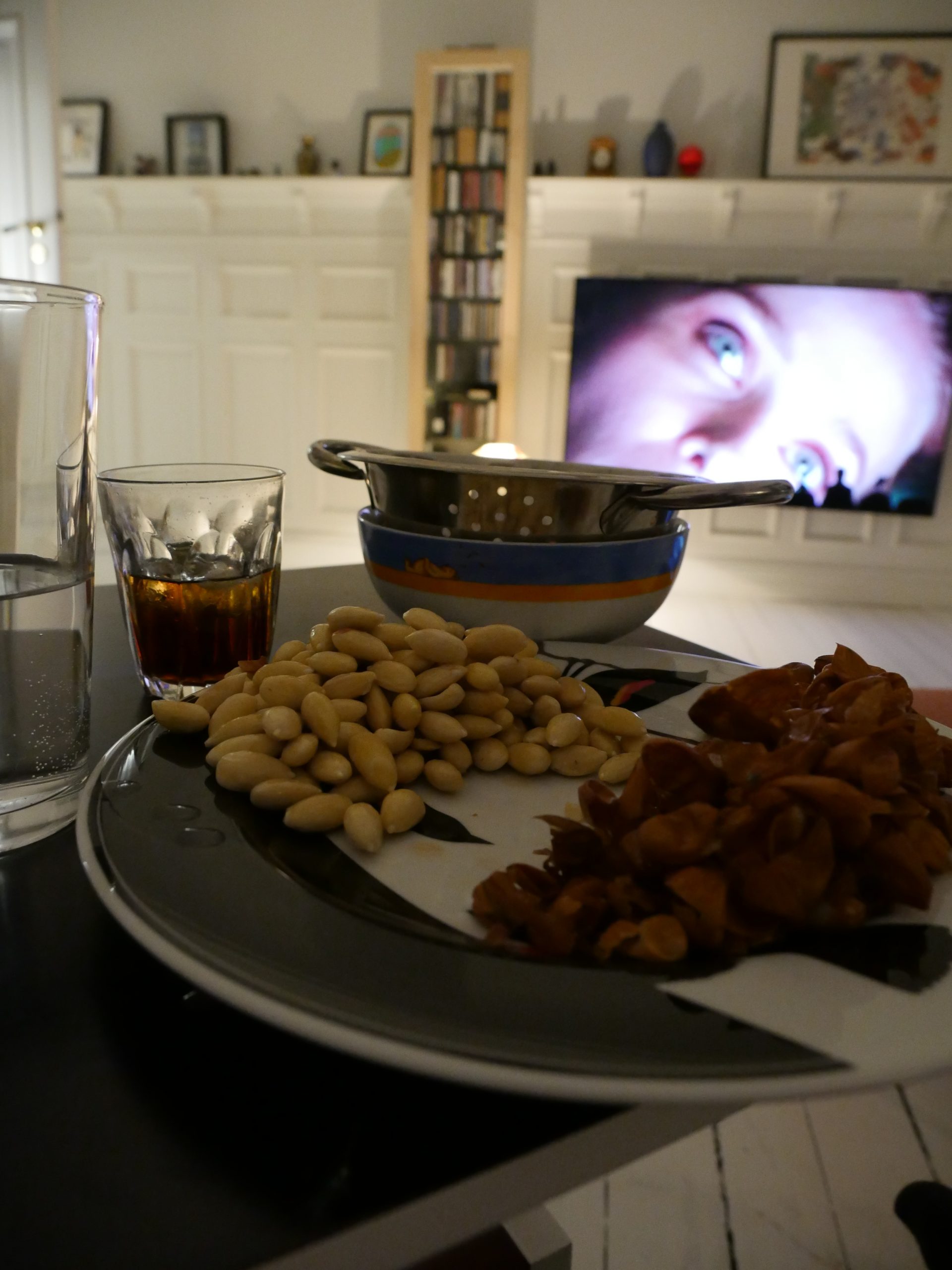 For instance, you have to (but you are) blanch the almonds, which I’ve never done before. You let the almonds steep in hot water for ten minutes, and then you spend half an hour watching MST3K (the new season) while drinking rum’n’coke while er shucking the almonds. It’s very relaxing. I don’t have a grinder, so I ran the almonds (half blanched (but you are) and half not) through a fud perfessor. I googled around a bit and found a site that said you have to be careful not to run them too long because the almond oil will start separating out from the dry stuff, and you don’t want that. So they recommended running it half a minute, and then put the stuff through a sieve and then run it again.

And I thought… why would you run the sieved stuff again? It’s already flourish?

And while I was standing there shaking the strainer it hit me: They meant run the stuff that doesn’t make it through the sieve in the fud perfessor some more!

Thank you, thank you. No, I won’t accept your Stanford offer; I’ll just be sitting here waiting for the McArthur “Genius” Award people to send me my award. 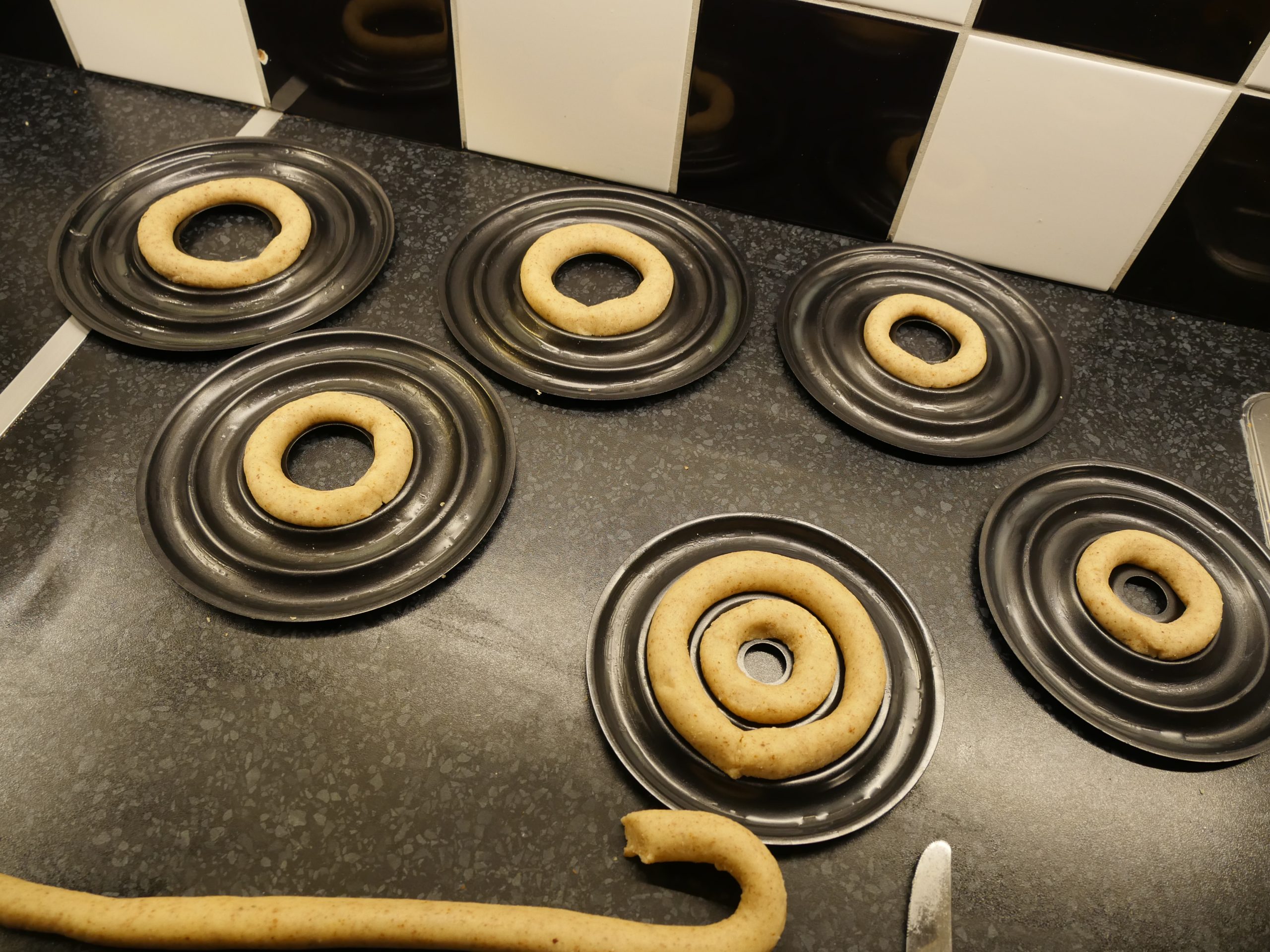 So you roll out the dough into sausages and then put them into these round shapes. The recipe said “finger thick”, but I’ve got many fingers and some of them are way thicker than other fingers. And other people have bigger hands. And smaller hands!

WHY CAN”T RECIPES BE METRIC 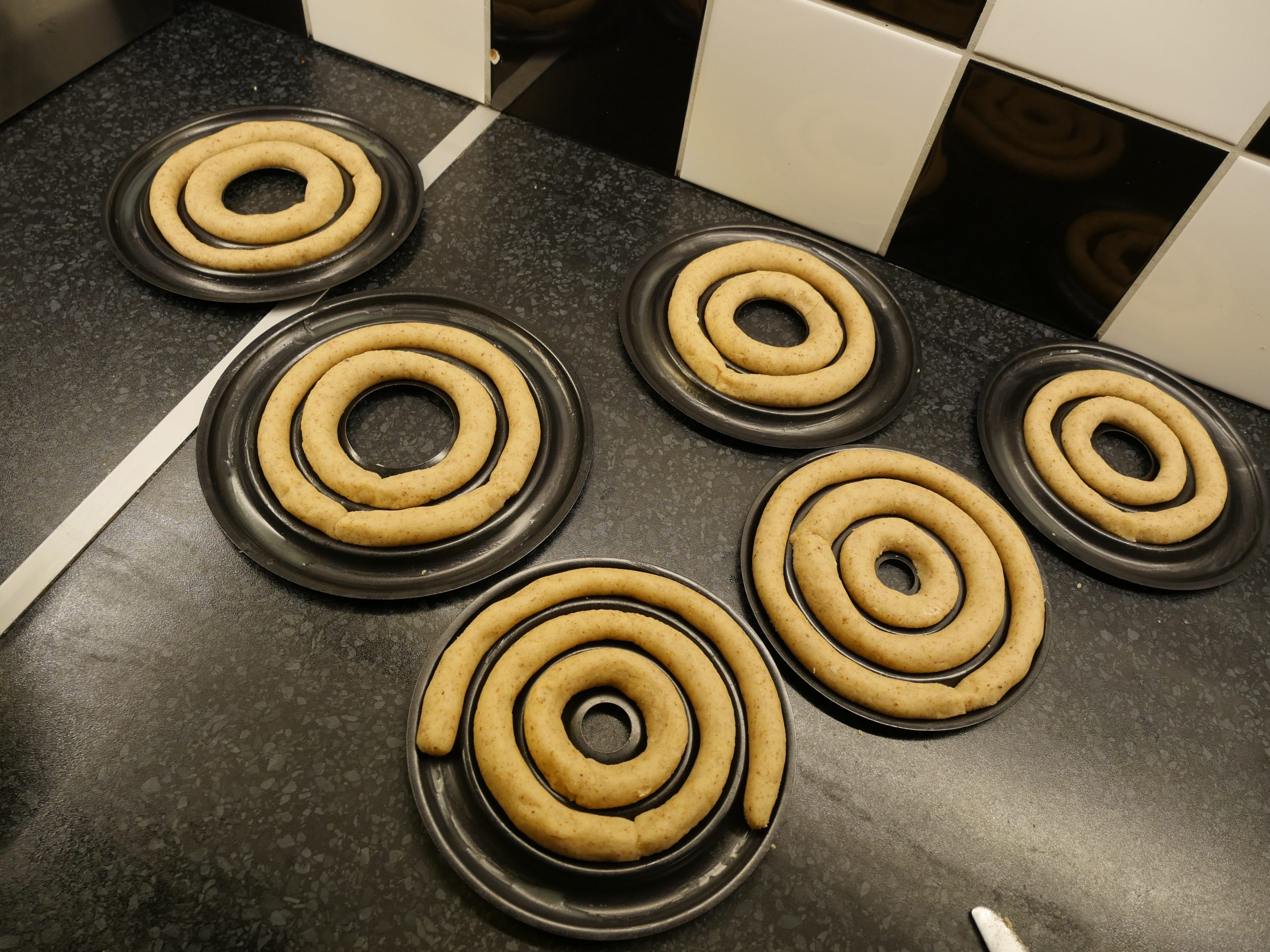 Uhm… I wisely started in the middle of each one because running out of the top rings isn’t nice. They’re supposed to overlap when you build the tower after baking… I mean, I need the smallest rings from all the baking rings, and then the next-to-smallest ones…

Anyway, do you think these will increase in size much when baking? I wouldn’t think so? I mean, it’s just almonds, sugar and egg whites… I guess the egg whites might make them blow up somewhat, but not a lot? I think? I mean, they’re not whisked or anything? 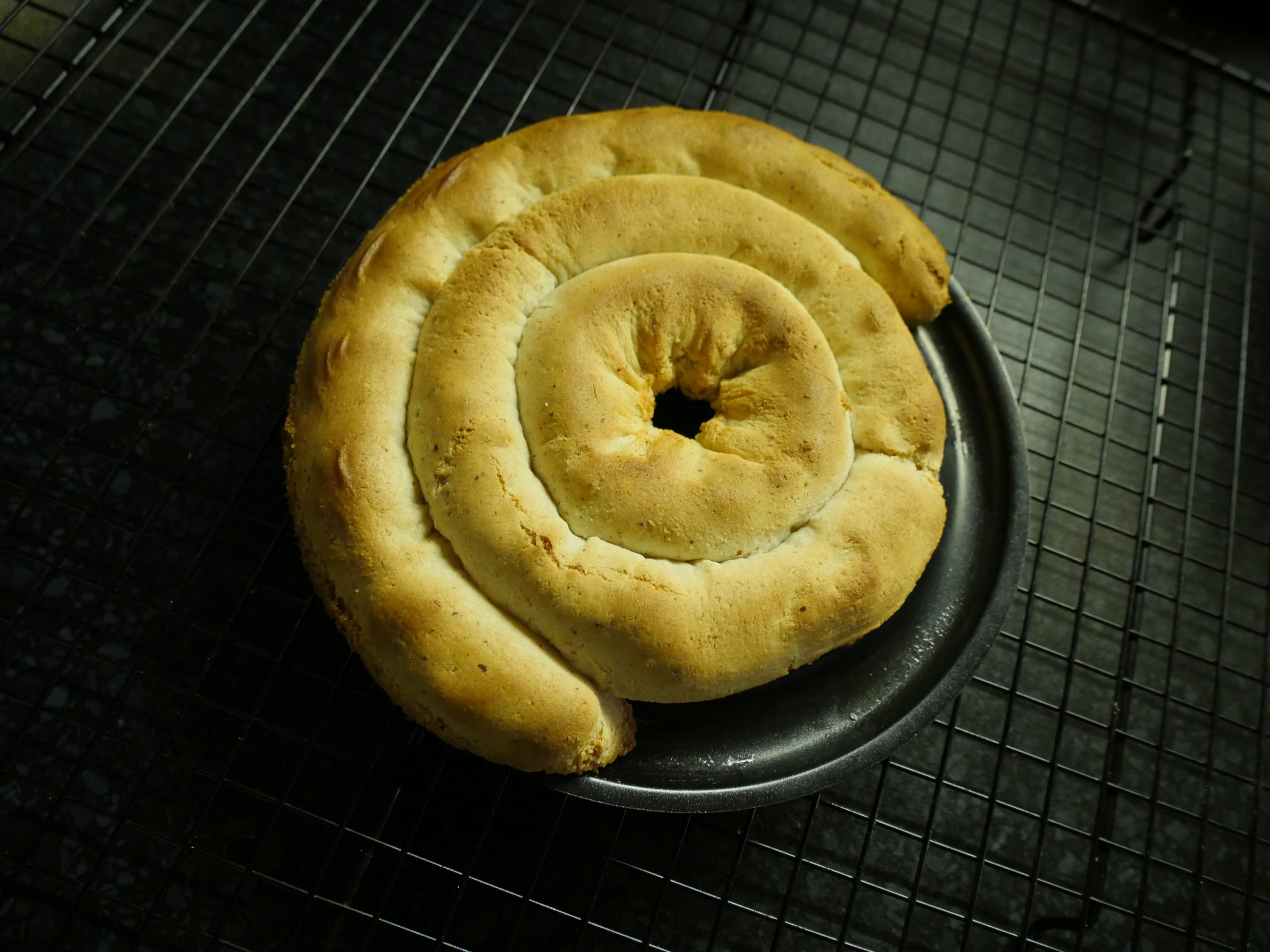 Well, it’s good that I did one test first. 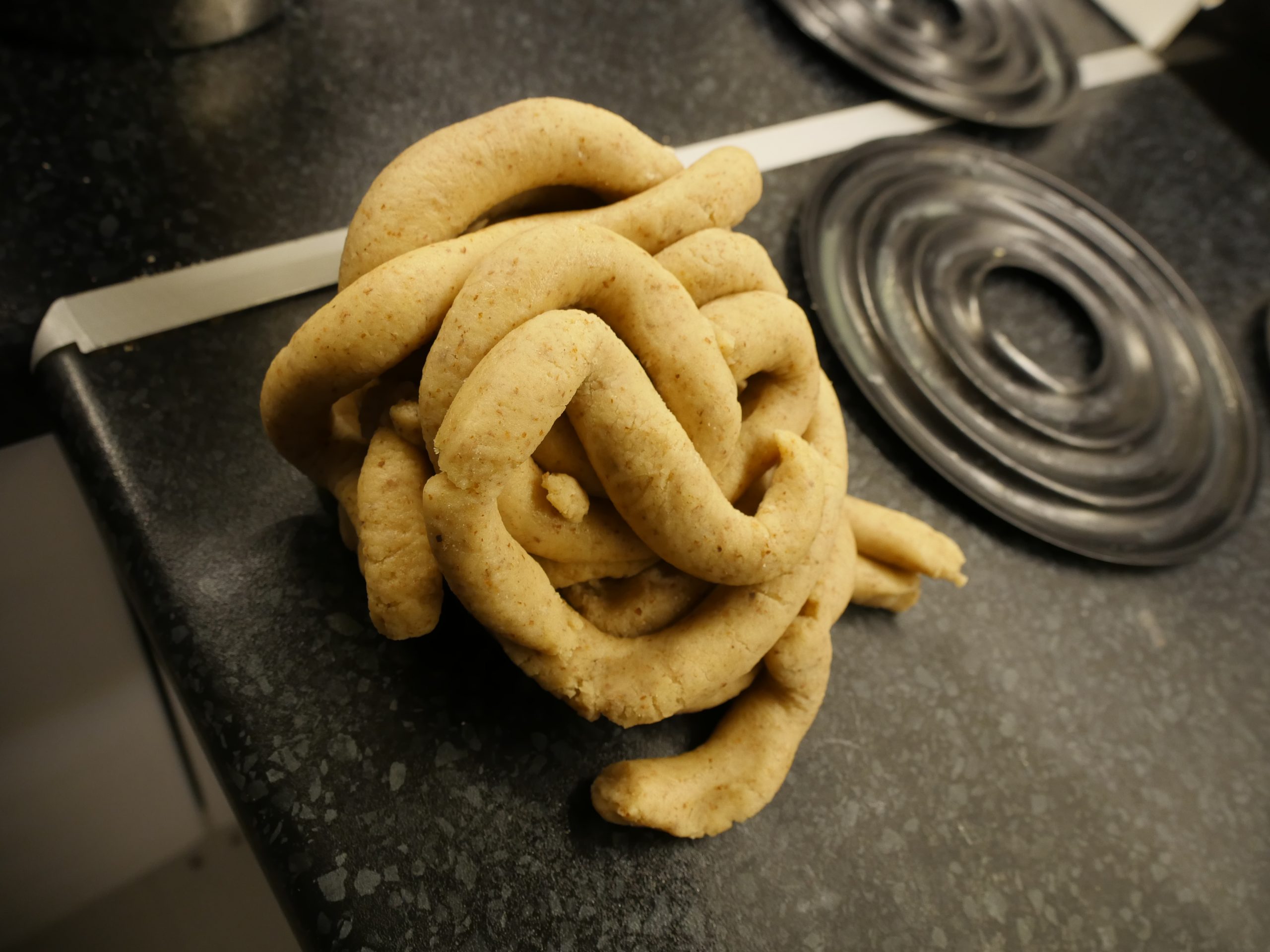 Back to the rolling board and roll some narrower ones. And… I think that’s pretty spot on? Except for how uneven they got? How can anybody roll with the required precision? 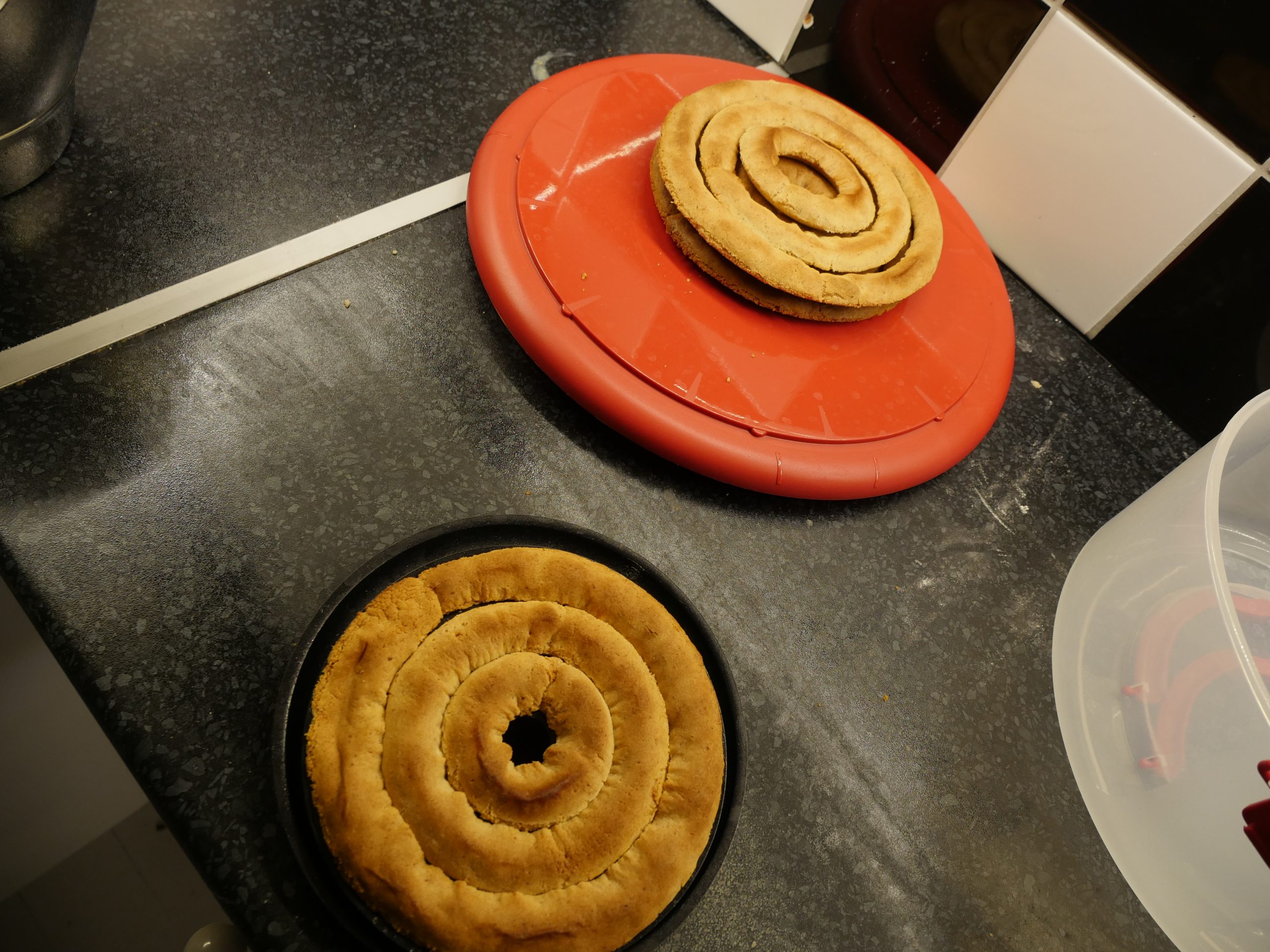 I was afraid they were gonna stick to the non-stick rings, but they didn’t. *phew* 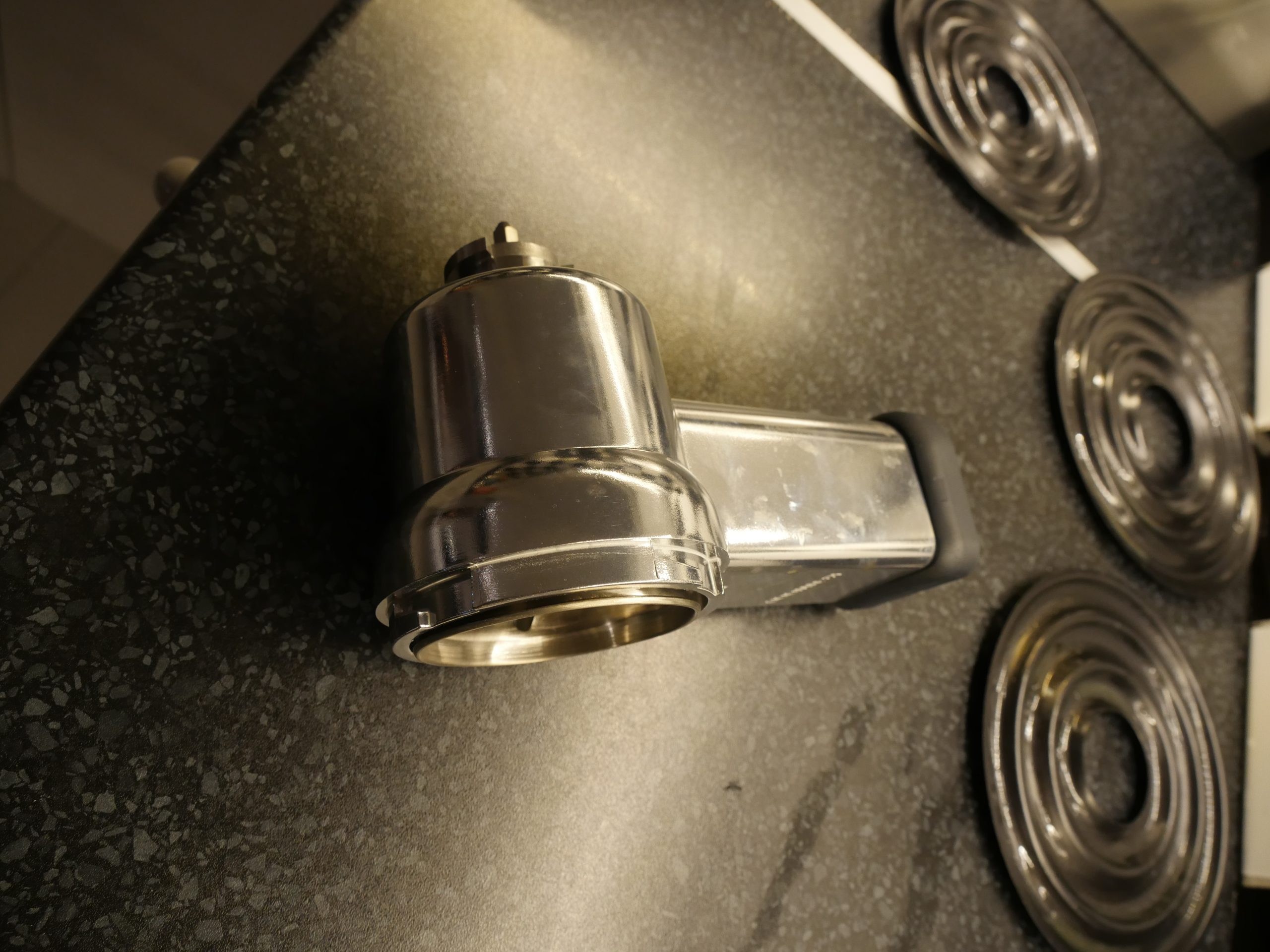 I didn’t know that I had a grinding attachment to my Kenwood that I could have used to make the almond flour instead of the fud professor. I’ve never used it! It would have been an adventure!

After the rings have cooled way off, it time to build the tower. You use regular glaze to glue the rings together. 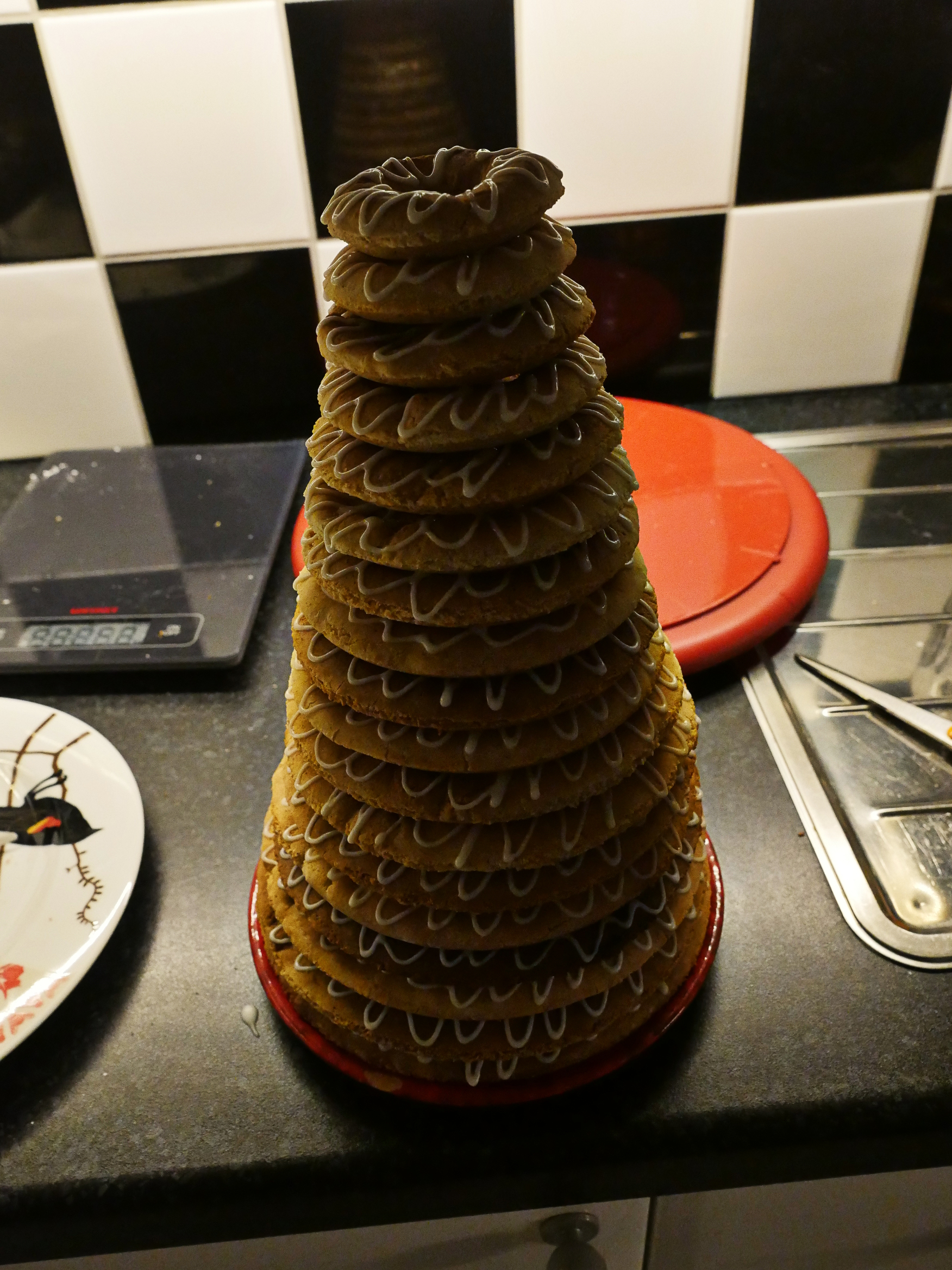 Look! It’s a tower! Even if the rings came out way wobbly (and a bit overcooked).

And then… to decorate the cake. As it’s usually served around the Norwegian fourth of July (which happens in May in Norway), it’s usually very flaggy. Here’s a typical example: But that seems so… uhm… I don’t know. You know. Unfortunately no stores around here were selling cocktail Anarchist flags (how could they have missed this market segment?), so I had to make them myself! Geez! 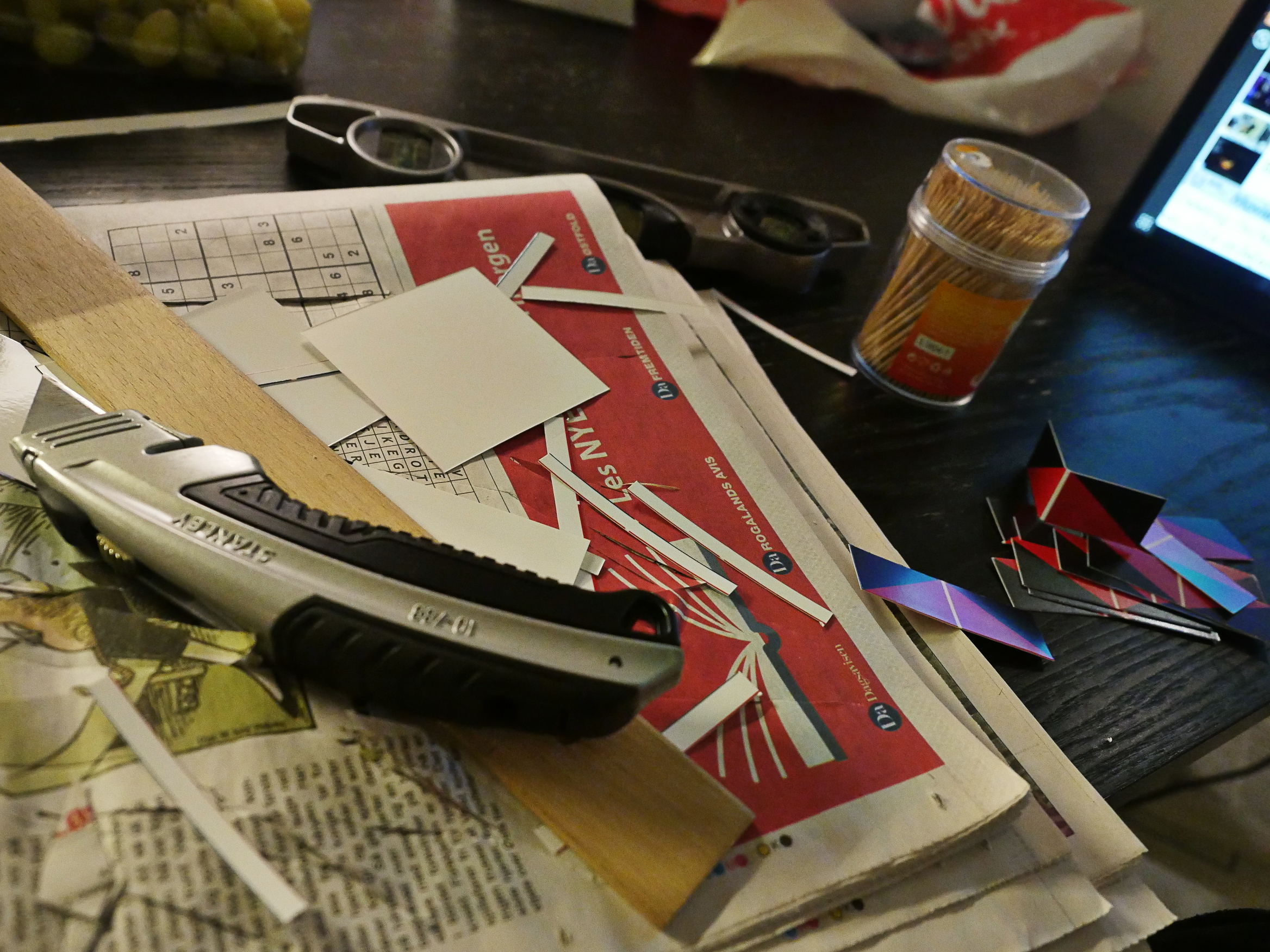 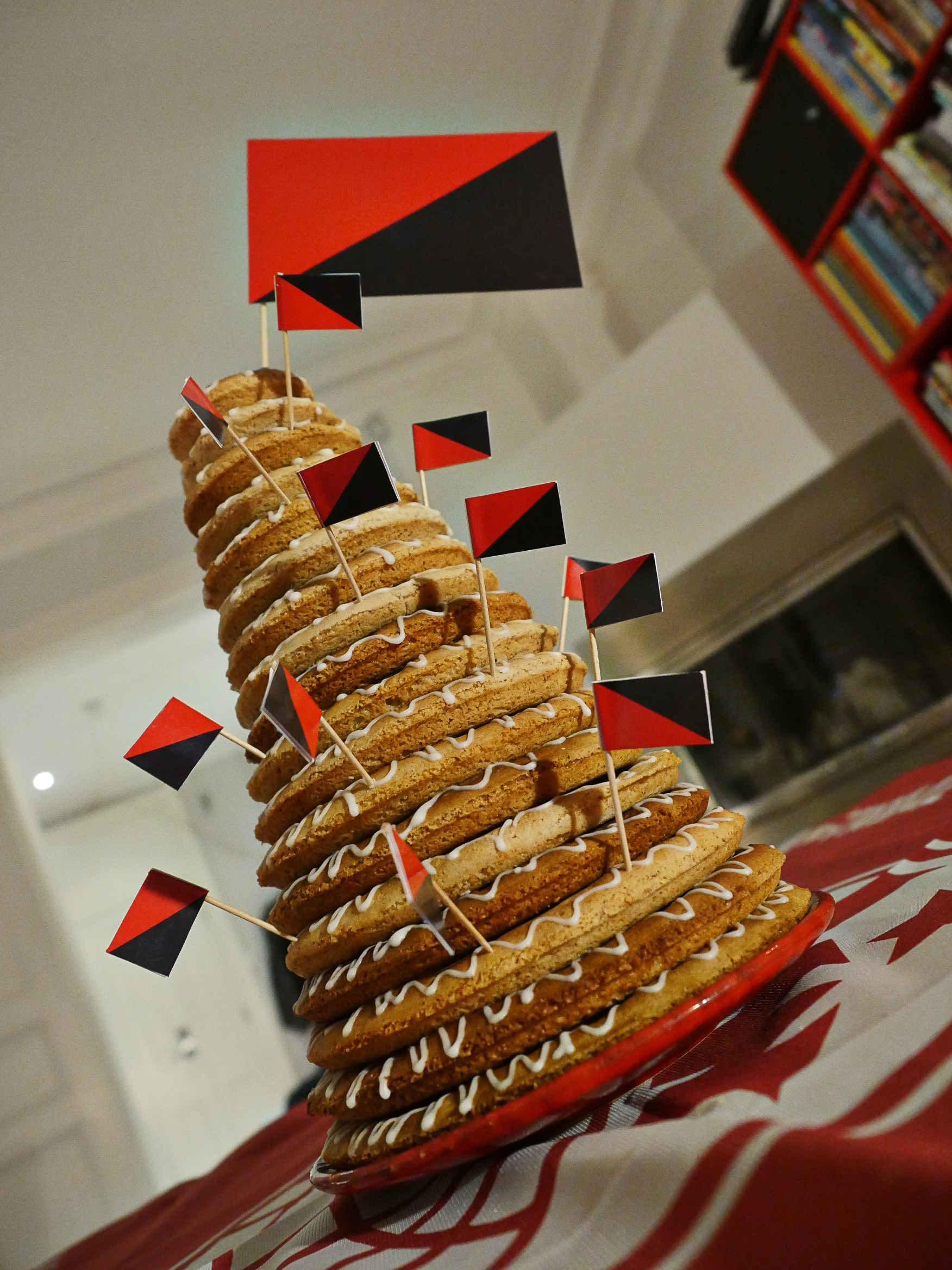 You start at the bottom so that the tower doesn’t become stumpy.

So how does it pair with the book? 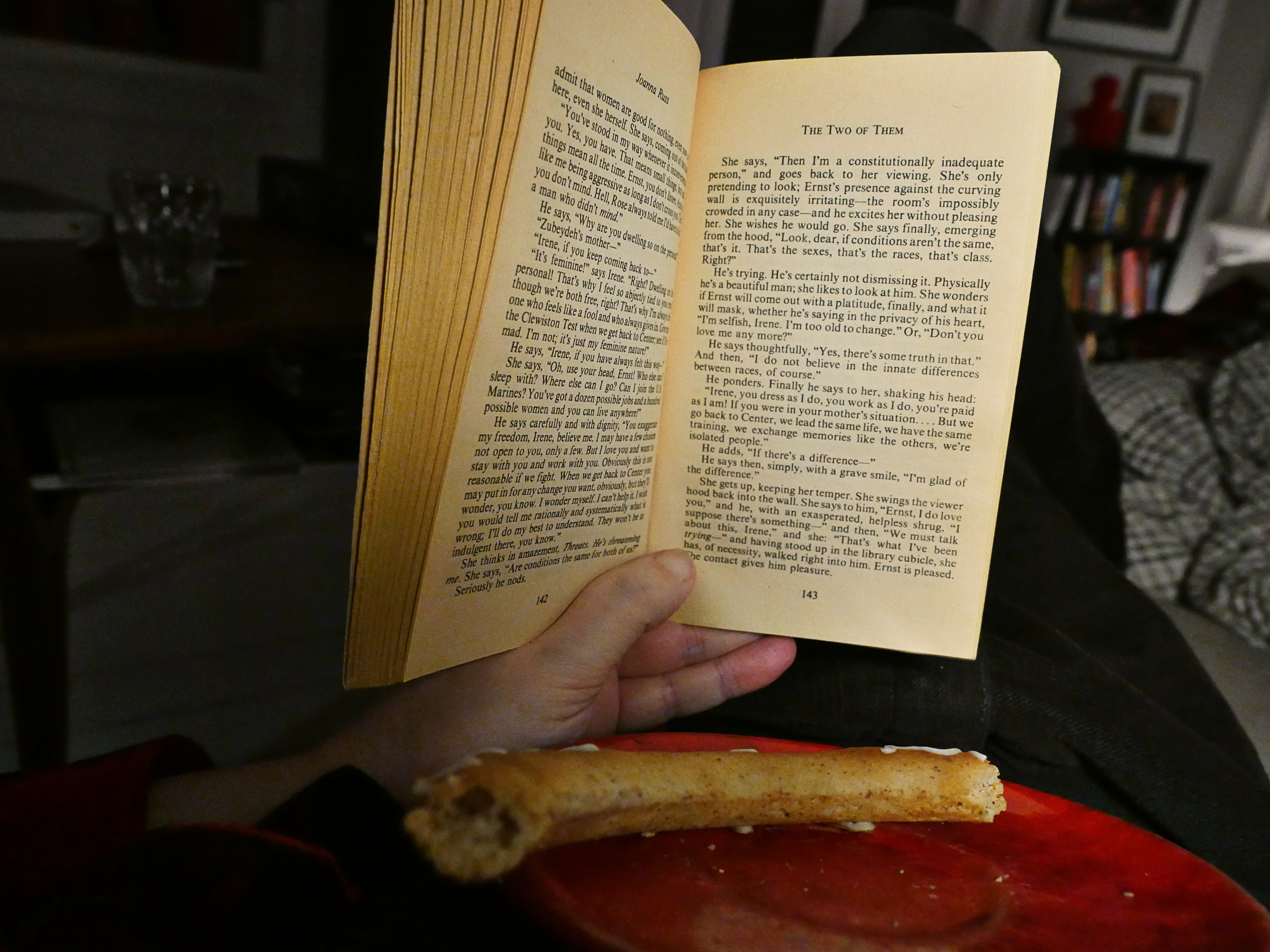 The crispy exterior along with the moist, chewy inside is a dialectic that fits the sf-angry exterior of the book with the feminist-angry chewy centre of the book.