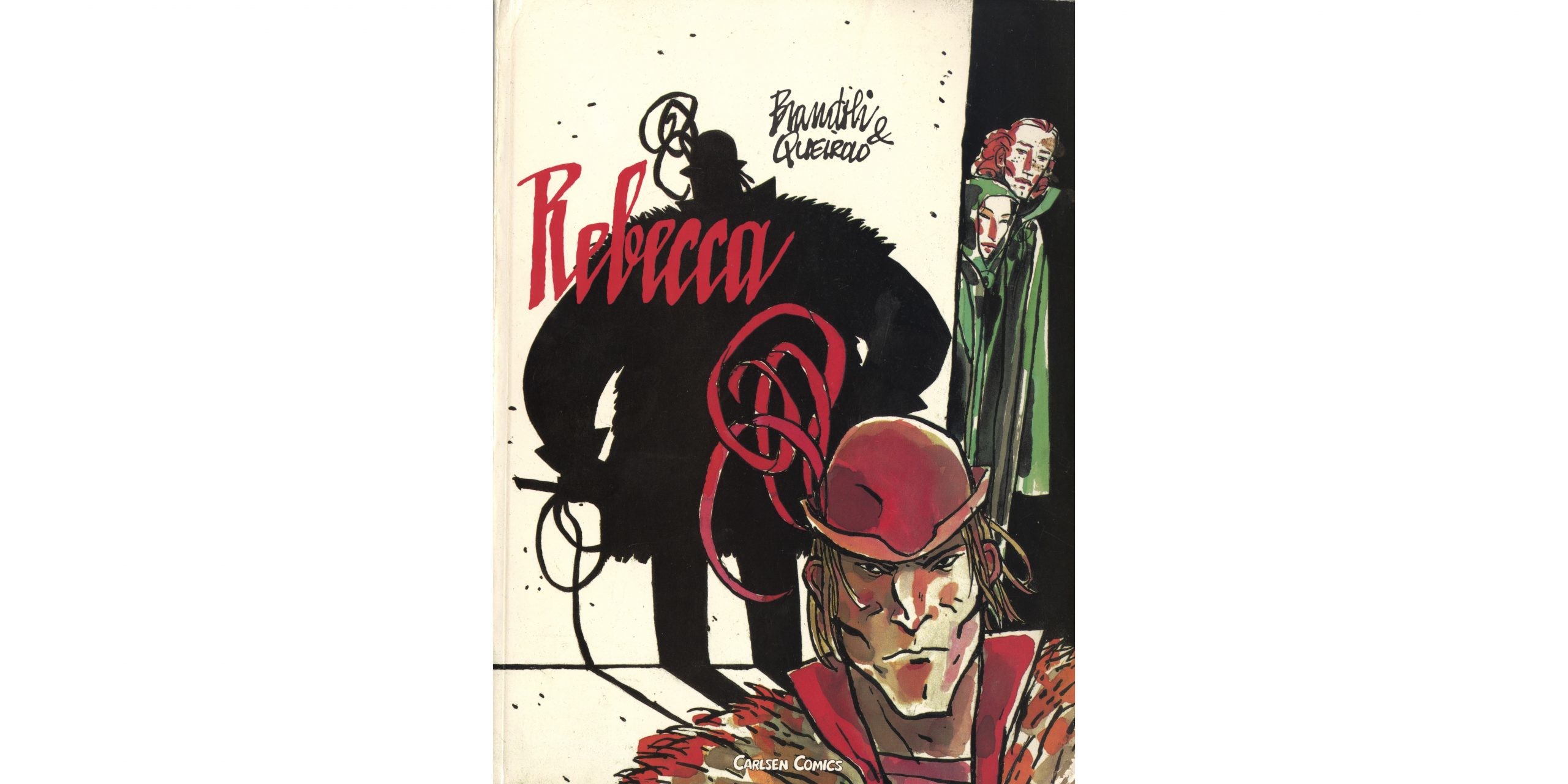 Neither Anna Brandoli (artist) nor Renato Queirolo (writer) are prolific comics makers. Together, they’ve published five albums, and Brandoli has made one additional book without Queirolo. Rebecca remains their most well-known work. 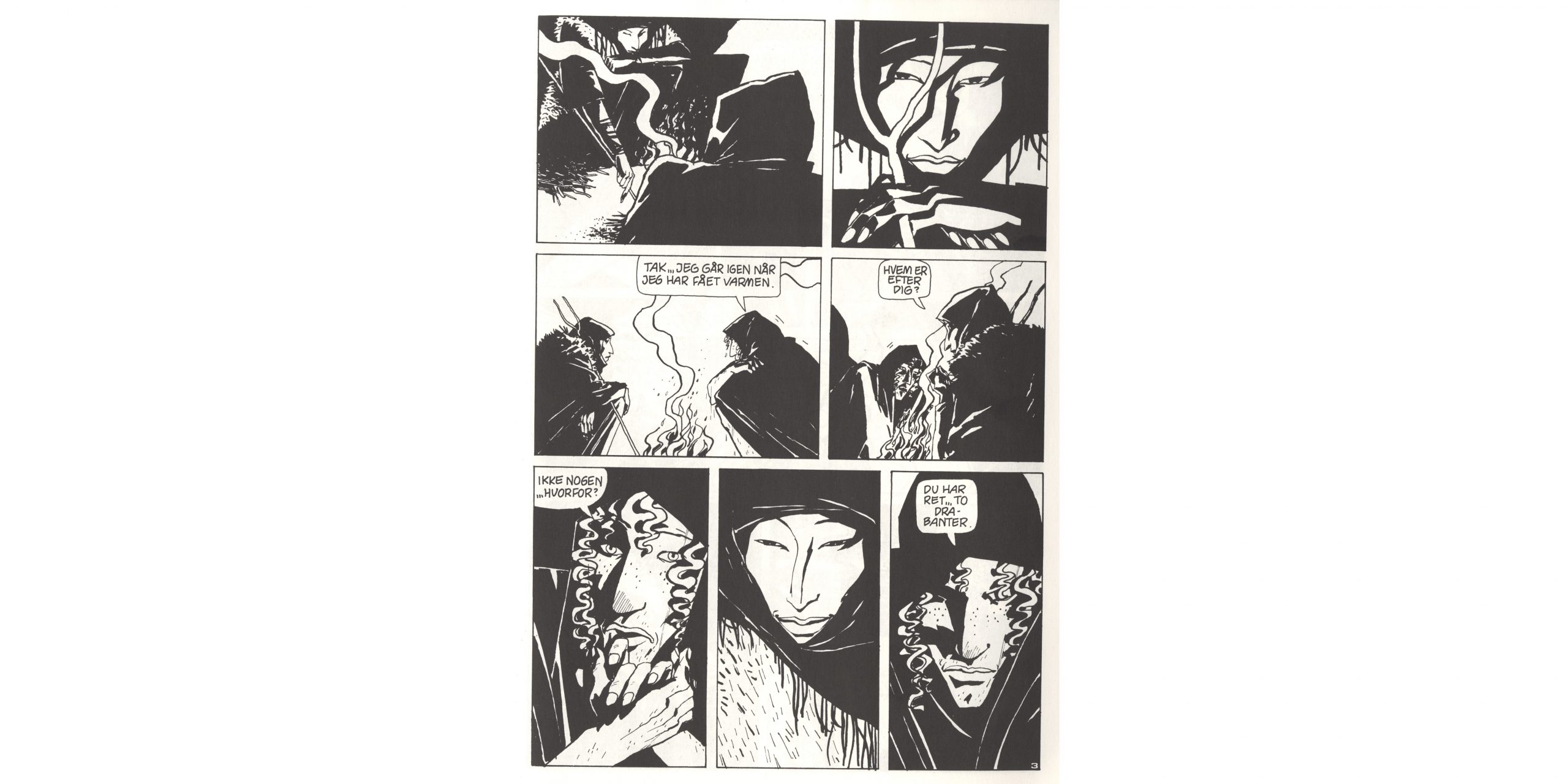 Rebecca began publication in the Italian monthly magazine linus (all in lower case, for some reason) in 1981. And, man, look at that artwork. It’s so arresting. The harsh blacks that encroach from every side, and the tight close-ups of the faces alternating with the longer shots. 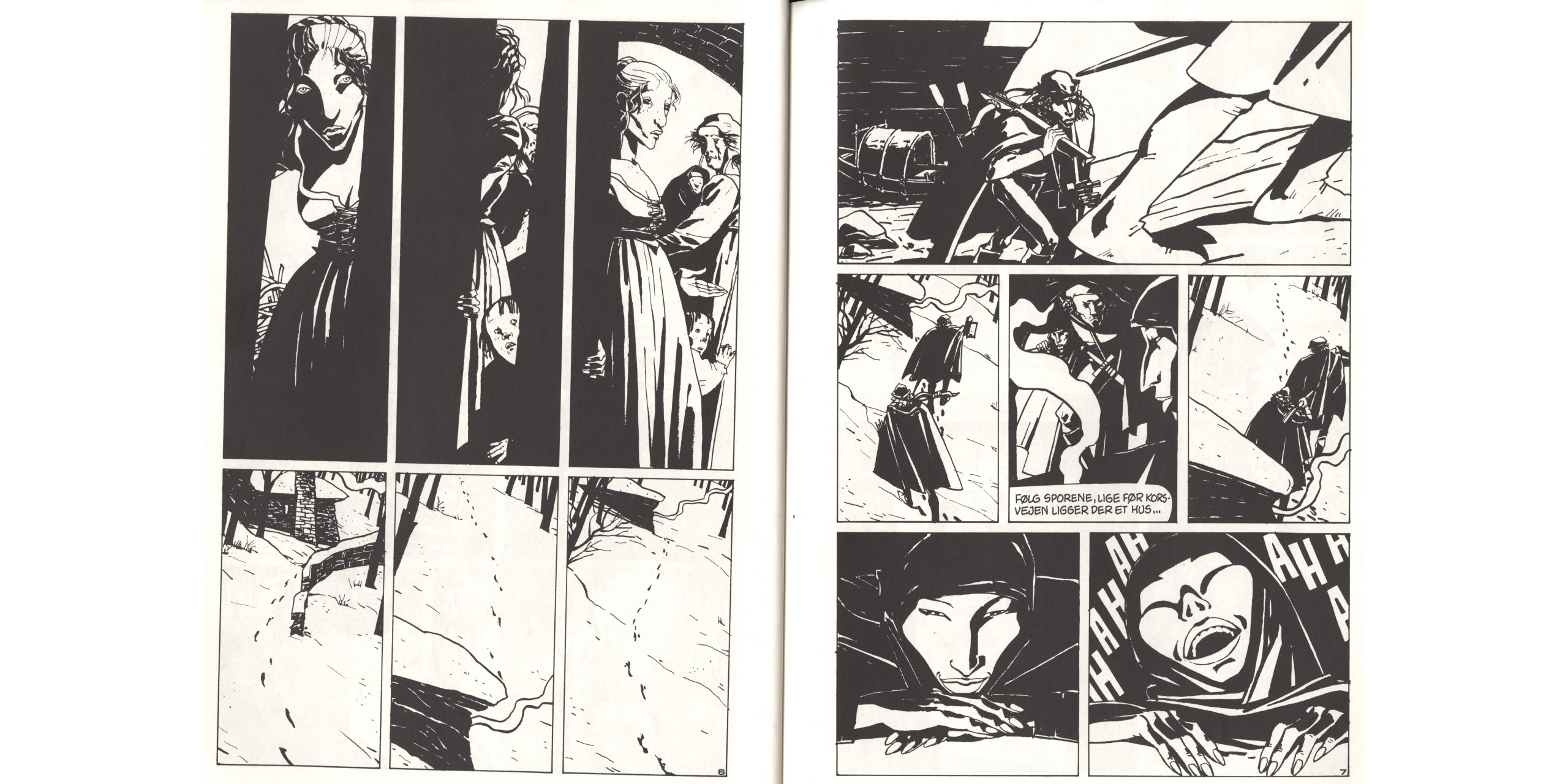 But it’s not really “filmatic”, fortunately: It’s pure comics. The storytelling is sometimes rather oblique, and what happens is often rather vague. But everything becomes clear a few pages later when you realise what those footprints means, and why that woman is so happy all of a sudden. And it generally carries on this way: You’re reading in a state that oscillates between bewilderment and enlightenment. It’s wonderful! 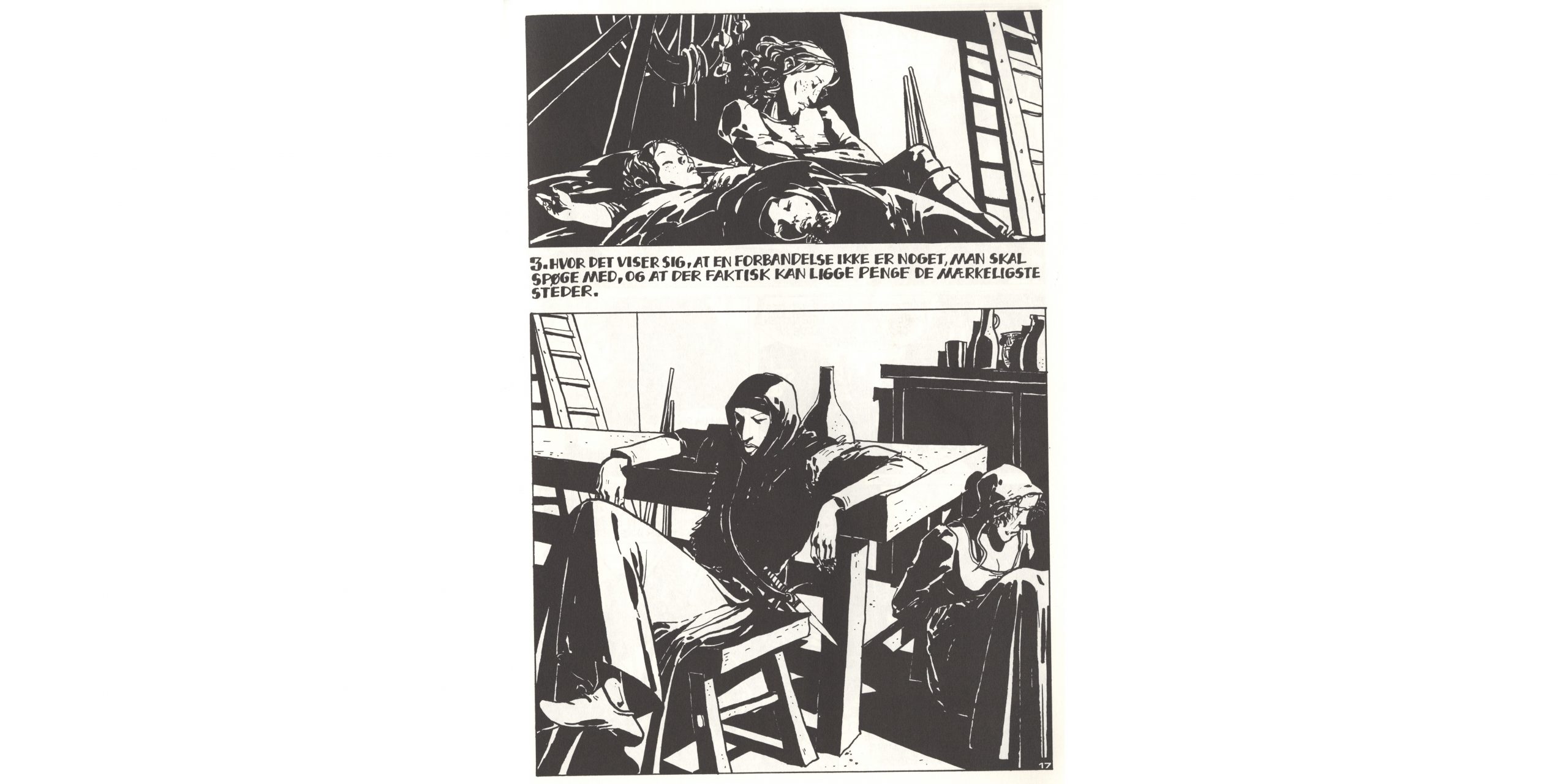 The story, as it turns out, isn’t all that mysterious. It’s basically a “heist movie”. That is, there are people who want to achieve something (having to do with money or power) and other people plotting against them, and things go wrong and then go right. And it’s set in the late fourteen hundreds, which make these “chapter headings” (seen above) ring true. This one says “3. Where it turns out that a curse is nothing to joke about, and money may be hidden in the most curious places”. It’s a teasing way to foreshadow what may be happening in the chapter. (And I would assume that each chapter was published in linus per month or something.) They’re mostly misleading, which adds to the fun.

The artwork is obviously influenced by Hugo Pratt. That’s a very Prattian cape.

But there’s also a strong Jose Muñoz influence there, like that face to the left. But more insectile.

And perhaps a bit of Didier Comès, too? But Brandoli’s arwork is more than just a collection of influences; it’s fluid and expressive and original. 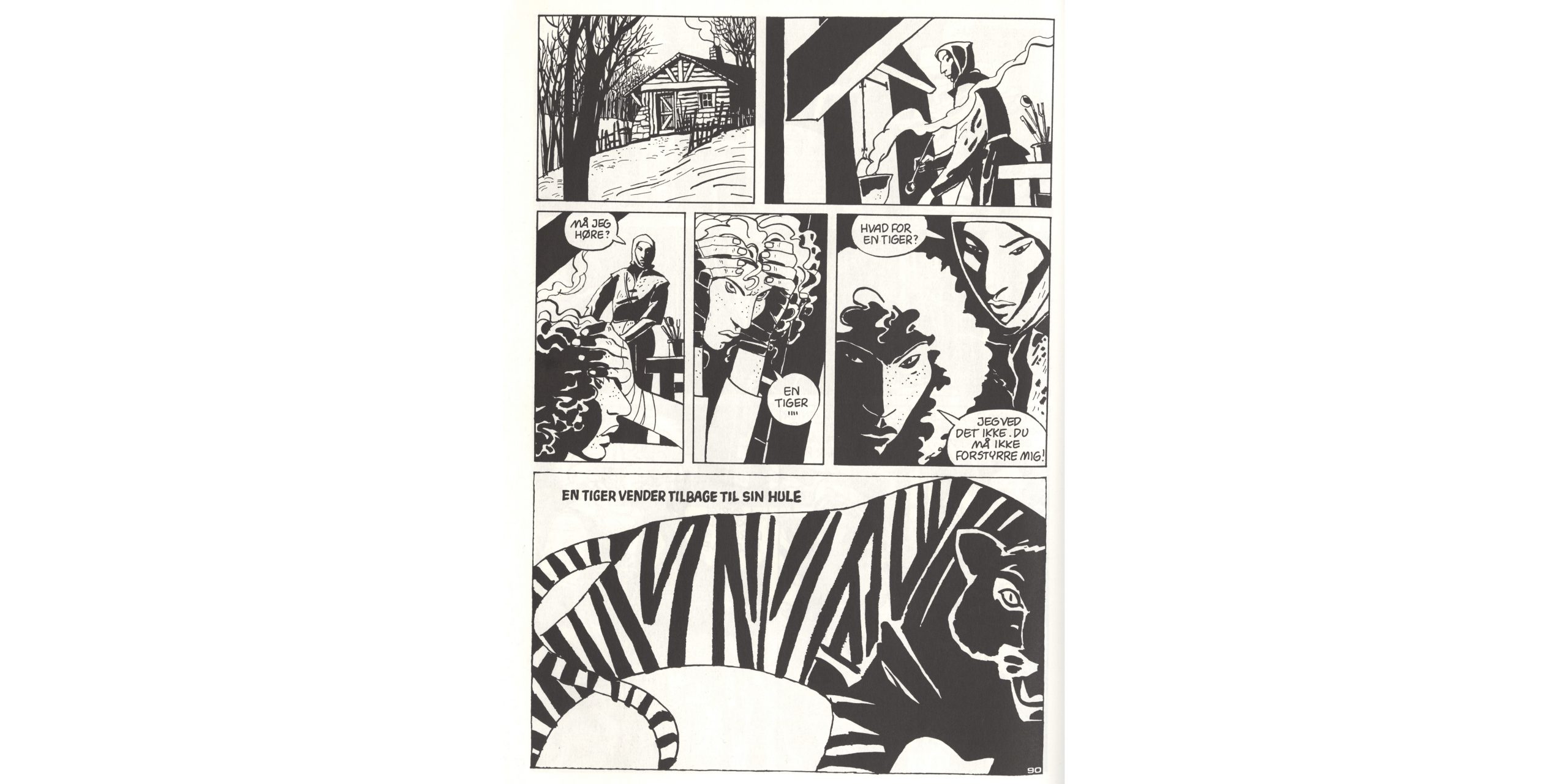 I also wonder how many BD artists have been influenced by Brandoli in turn. This looks not that different from what David B would a decade later… 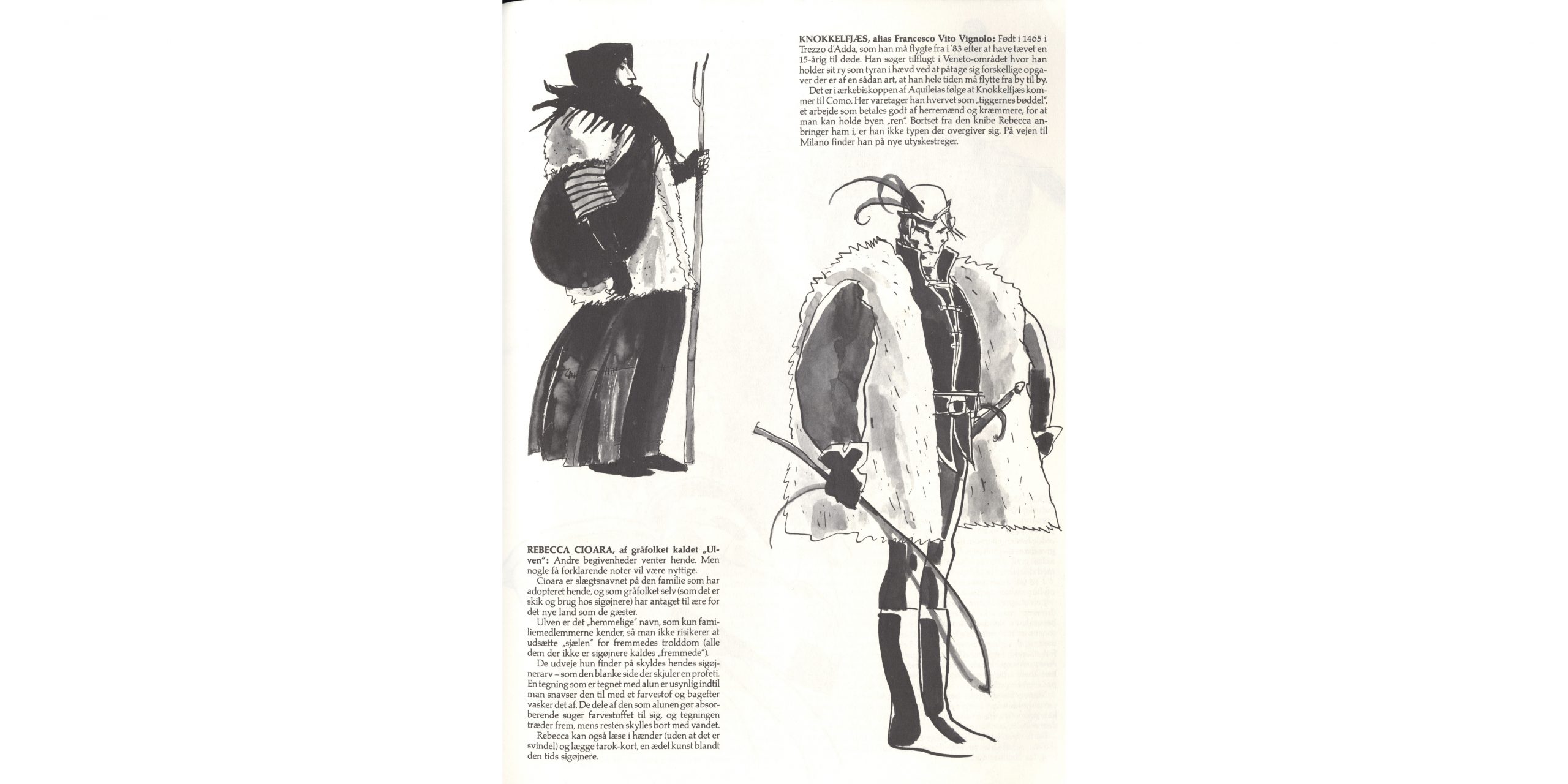 It’s obvious that the creators had a lot of fun creating this book. Not only from the mischievousness of the narrative, but also from the extras included in the appendix. We get a sketch of every player in the intrigues (and there’s a lot) complete with their biography. 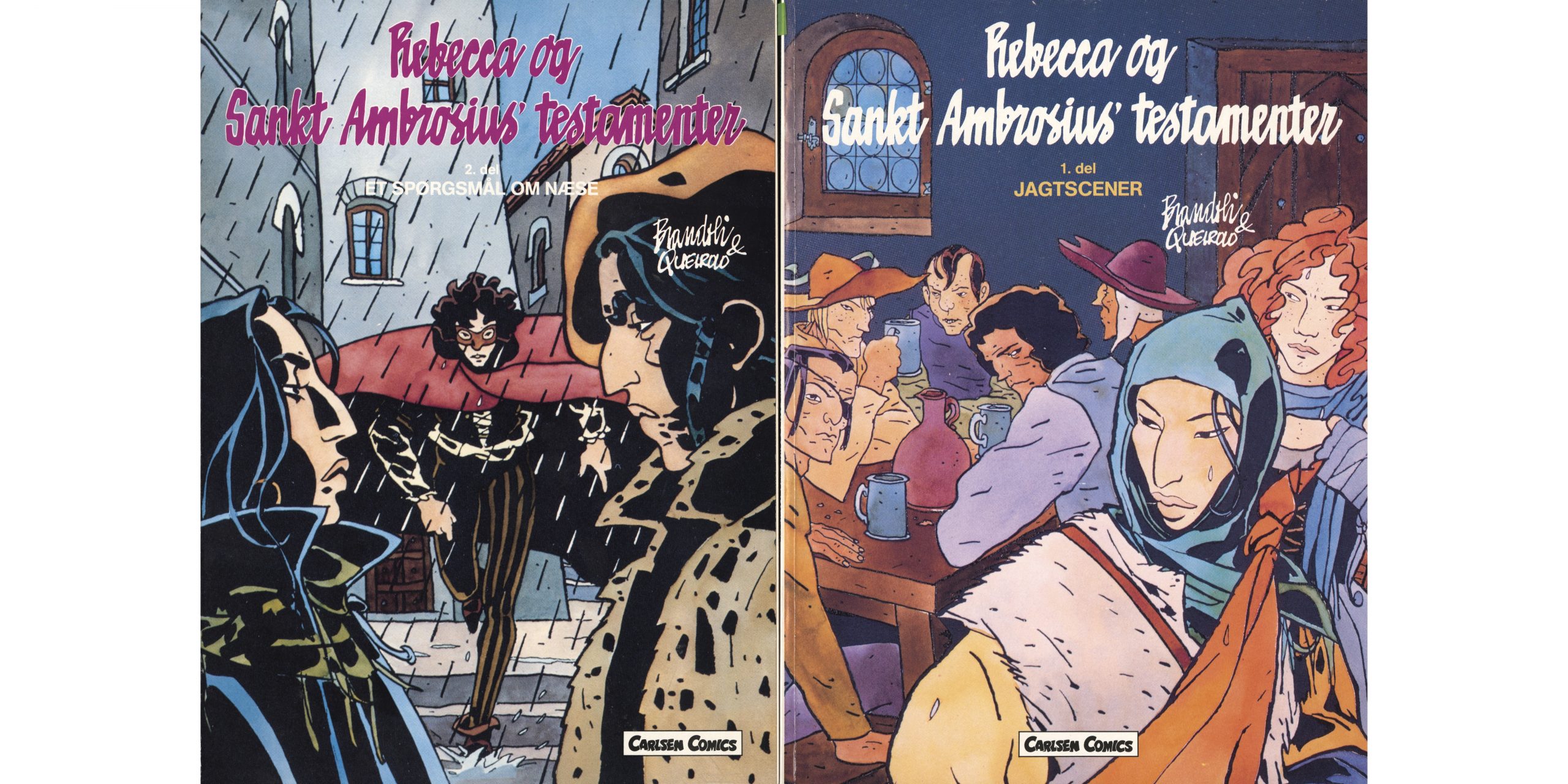 The next story was projected as a three-part series, and features many of the same characters as the first story, but also a whole bunch of new ones. There’s at least a dozen main players, all plotting against each other in a quest to solve the mystery of the titular testament (which is divided into three parts that have to be brought together). You know. The normal stuff. 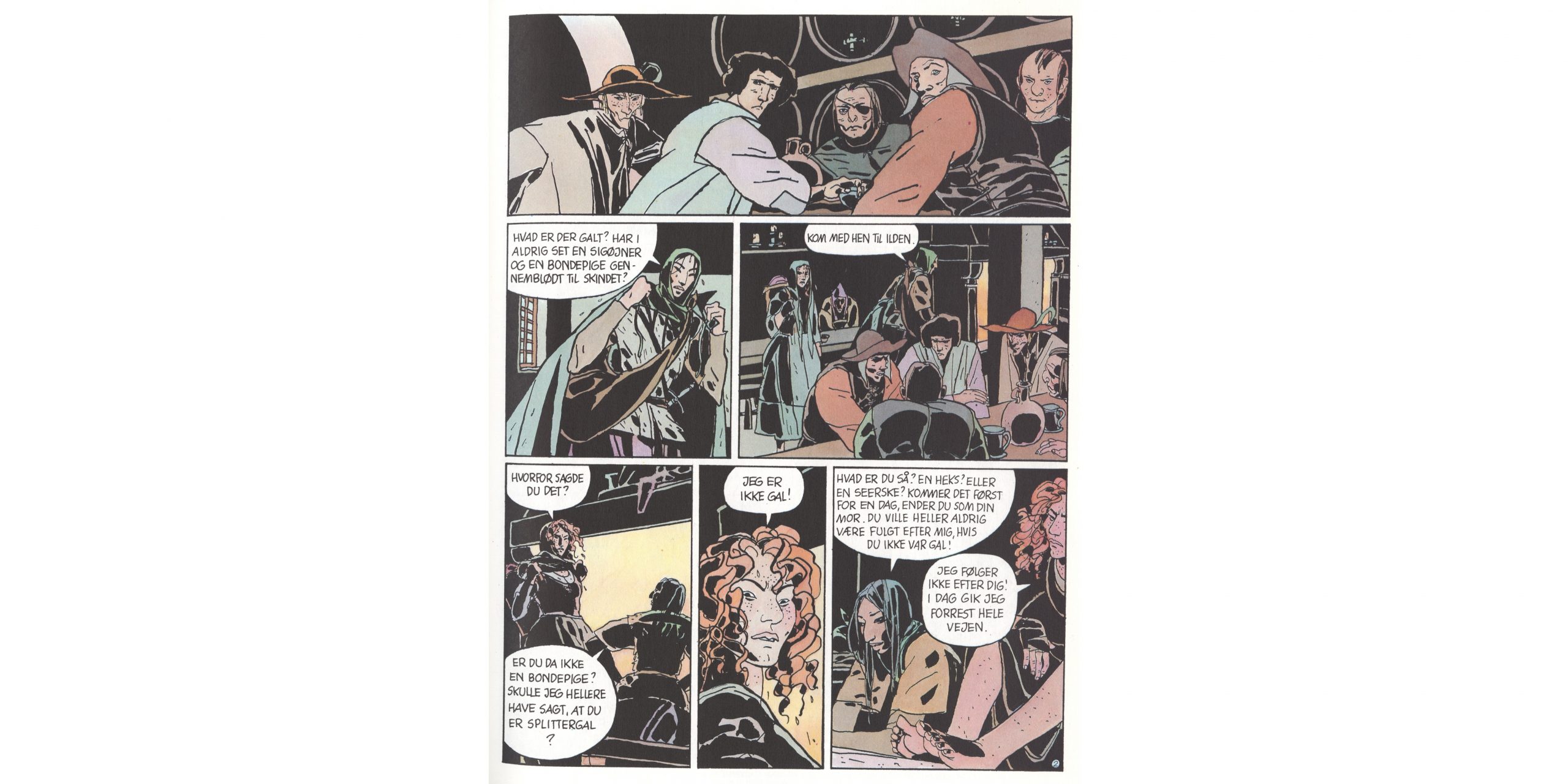 It’s printed in colour, but it doesn’t really look like it was drawn for colour. Brandoli drawn exactly the same way as before, with blacks heavily spotted in. Which makes it difficult for the colourist to do much, but it’s also a practical problem: With this printing process, you have three choices: You colour exactly up to where the white space ends (and if the registration is a fraction of a millimetre off, you get unsightly white lines here and there), or you colour a bit into the black fields (but then you get a blotchy black because you can see the difference between the pure black and the black-with-colour over), or you colour in even the black parts (and then all the black looks rather muddy). 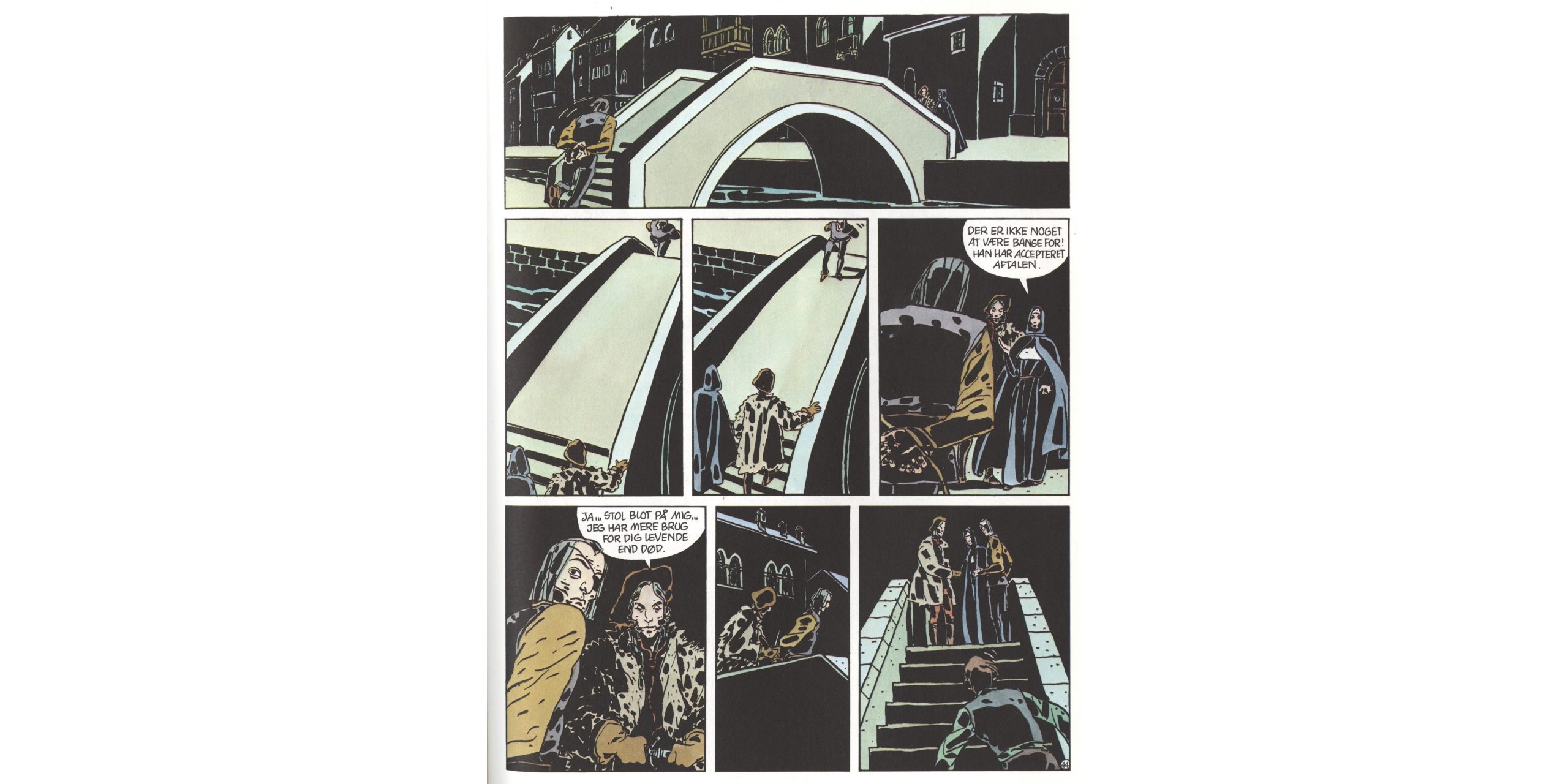 The colourist chose the third way, which means that everything has this queasy muddiness and sameyness to it. While the first black & white album was stark and gripping, the eyes skid more around these pages without really grasping onto anything. 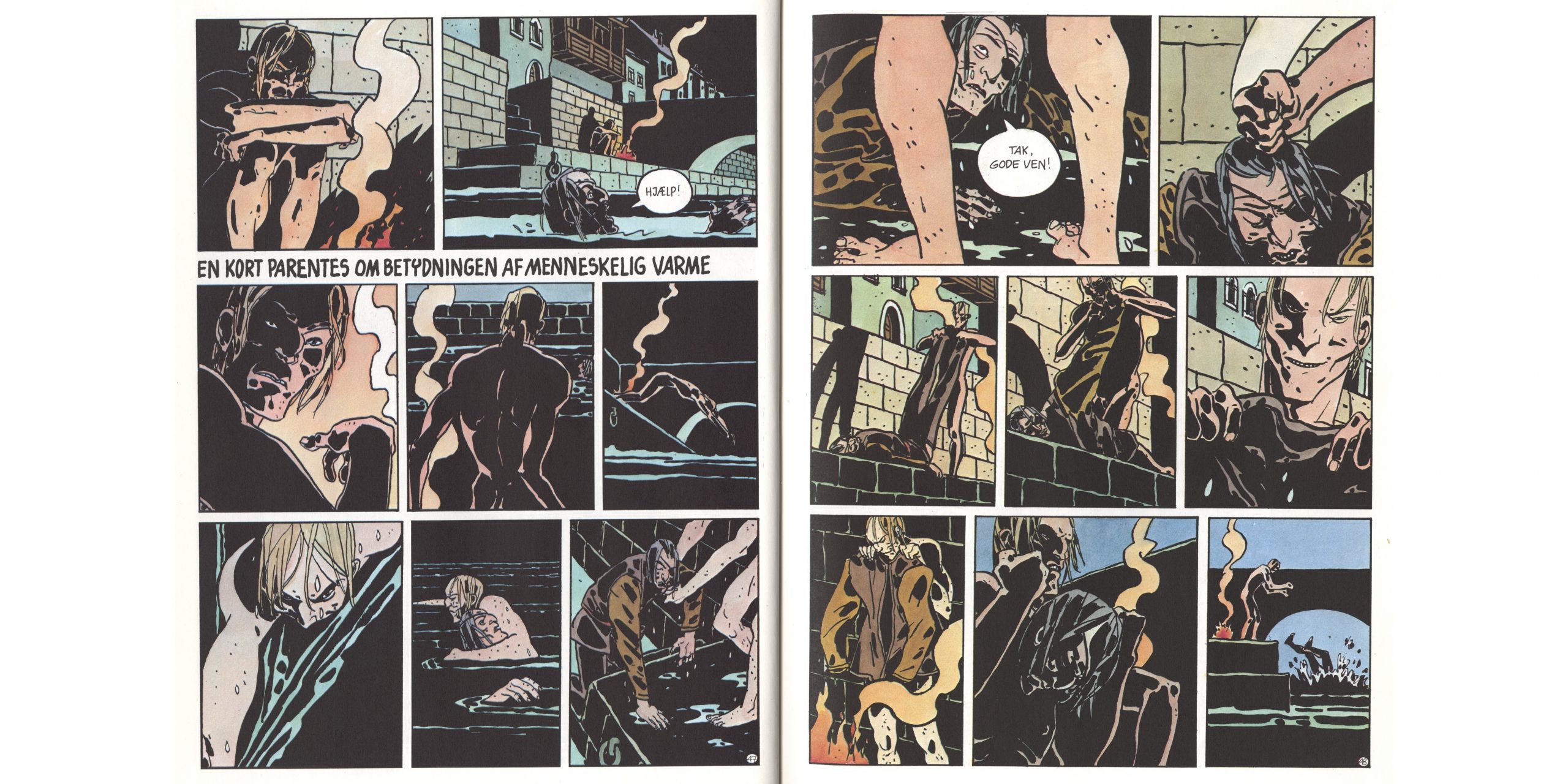 But it’s still very entertaining. The title here is “A short parenthesis about the importance of human warmth”. Indeed. 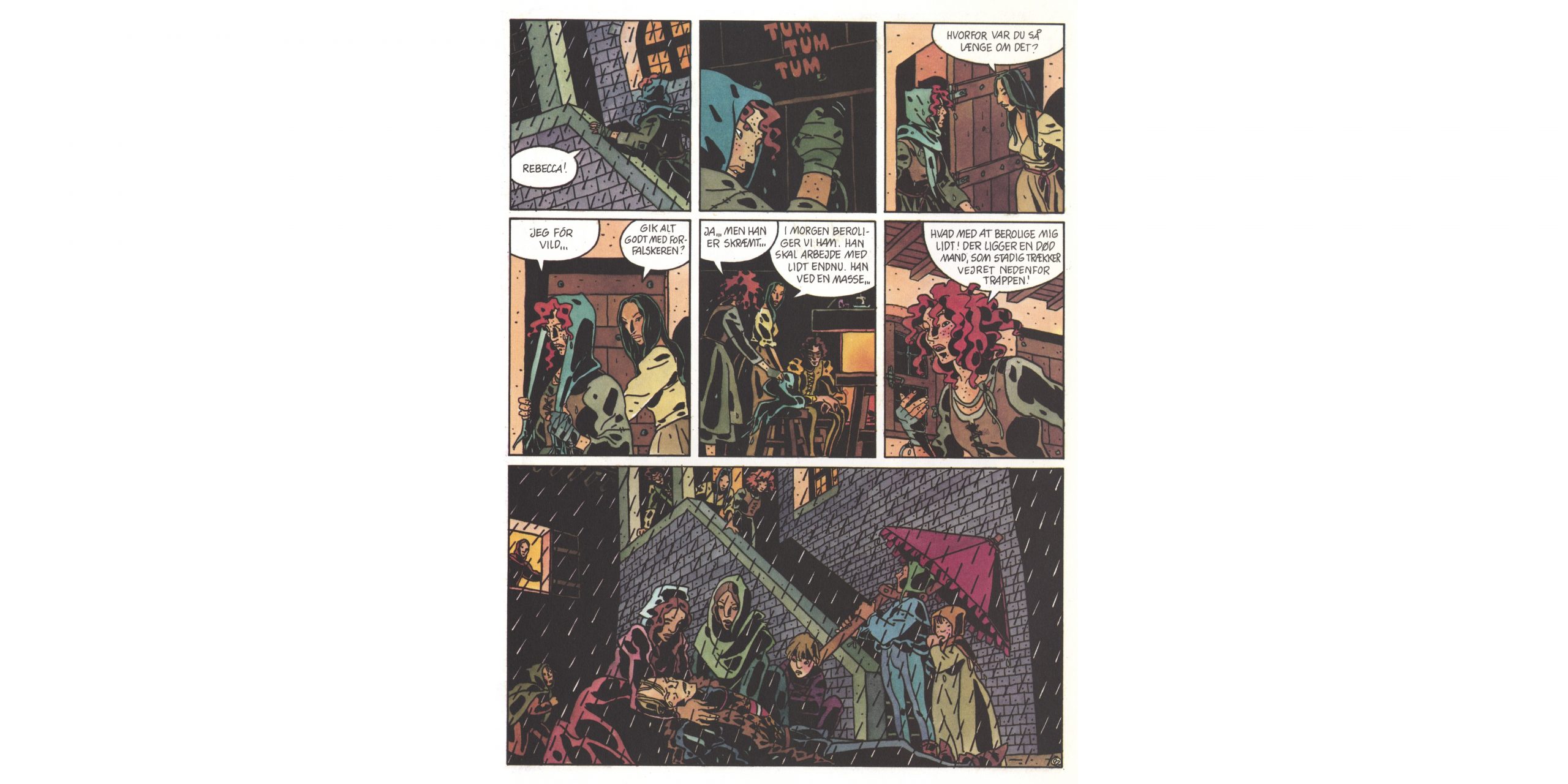 And then, after 92 pages of a very complicated and amusing plot, it ends rather abruptly. Not exactly on a cliffhanger, but more of a “whaa…?”-hanger. (There should be a word for that.)

The back page promises a third volume to follow in 1989, but that didn’t happen.

But perhaps that’s about to be rectified! Quoth Wikipedia via Google Translate:

In 2016 in an interview Queirolo said that, along with Brandoli, would like to bring to a conclusion the story of Rebecca who had been suspended: “It will not be only the conclusion of an old story, that enigma will be dissolved within a new story full of surprises and with greater maturity and depth of the “characters.

Let’s hope so! And when that happens, I also hope that these books get a wide reprinting, because they’re rather spiffy.

But in black and white, please.