I remember the Jonathan series as a meandering, hippy-ish series with gorgeous drawings from Tibet. It turns out that I remembered correctly, but there was also bits I had forgotten completely. 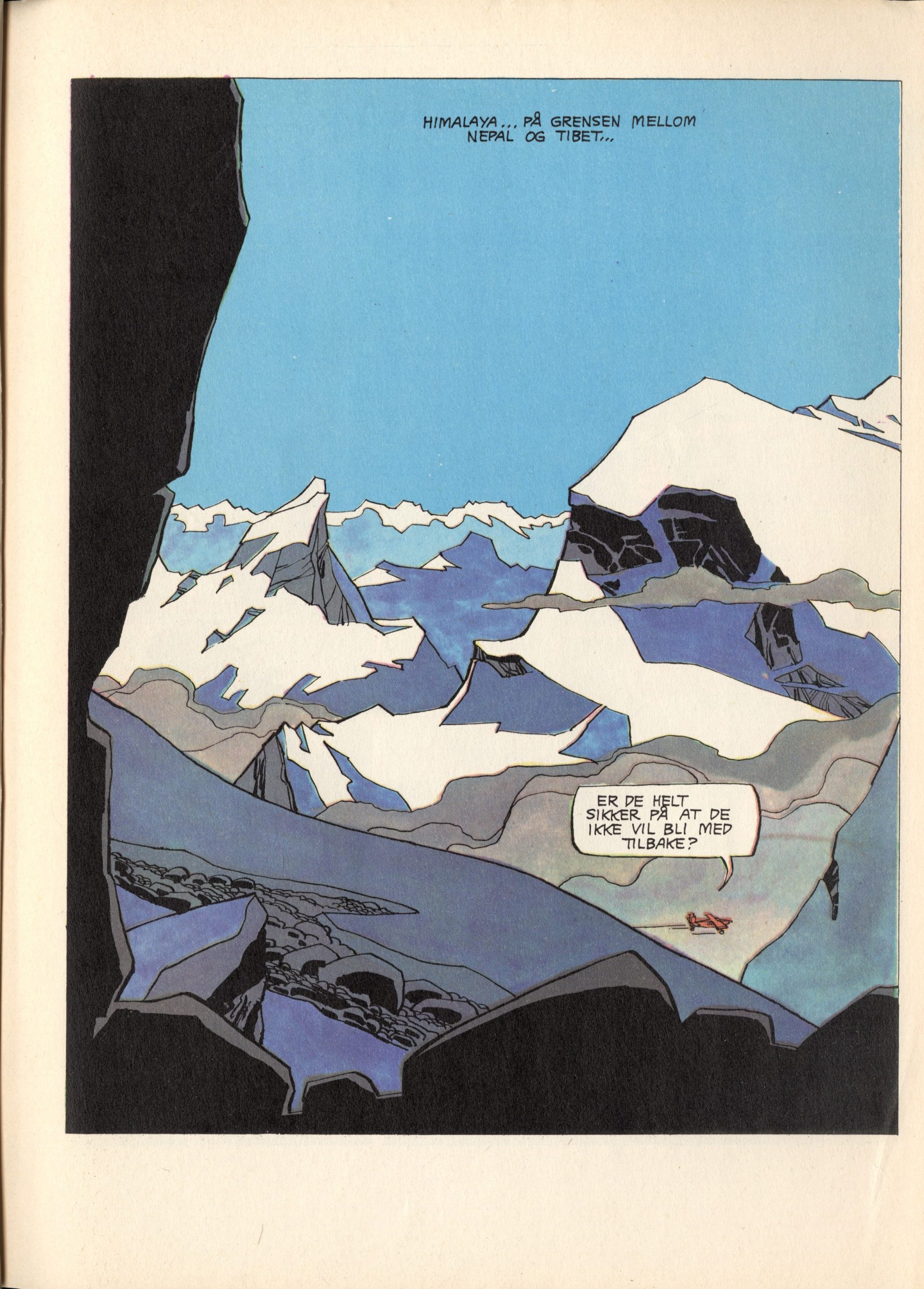 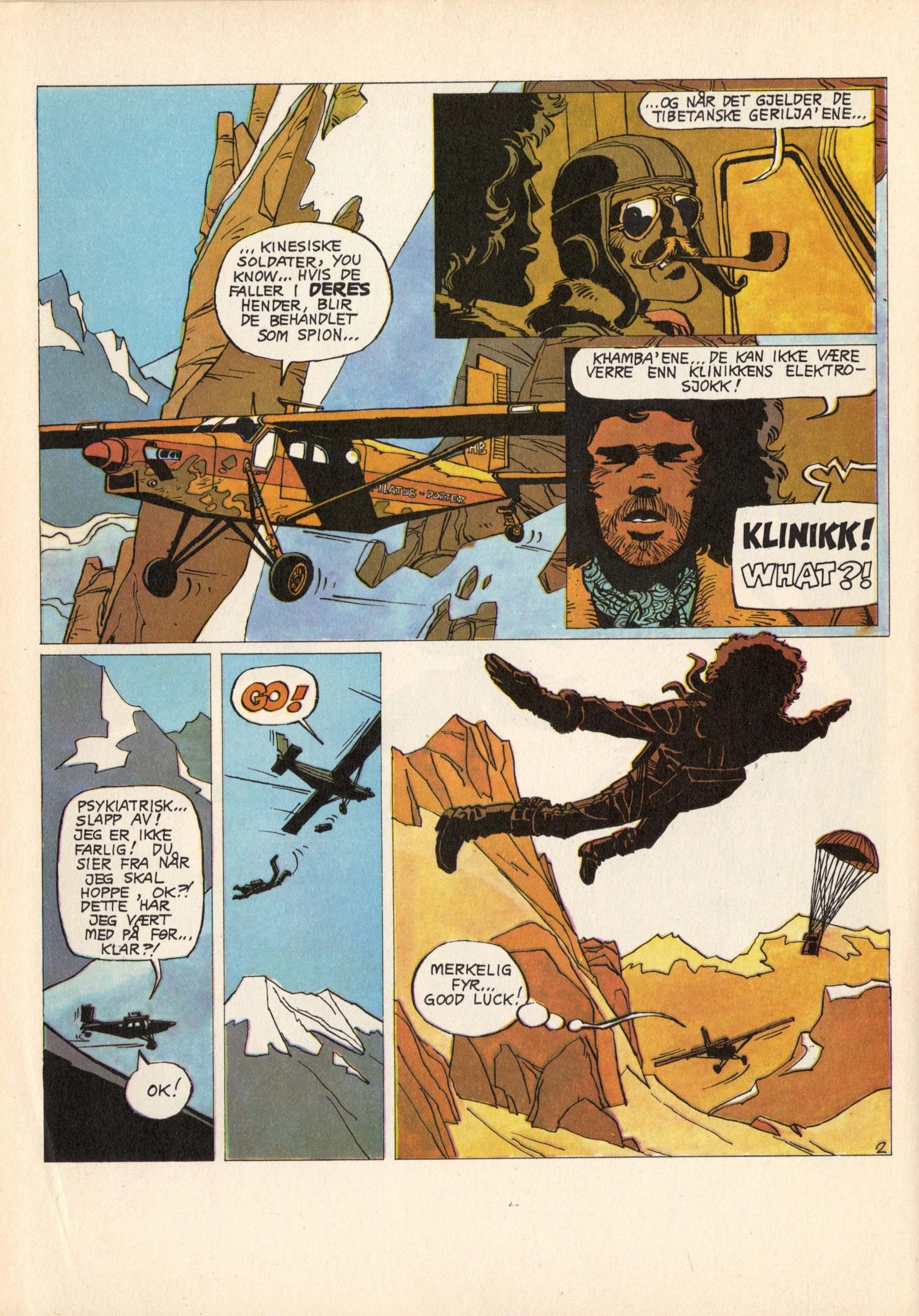 Cosey, born in Switzerland in 1950, worked as an assistant to Derib (also a Swiss guy (Swissish? Swisserese?)) in the early 70s. And geeze, that shows in the first album in this series. Jonathan physique looks just like Buddy Longways’ (a long-running series by Derib). As does the face and line work. 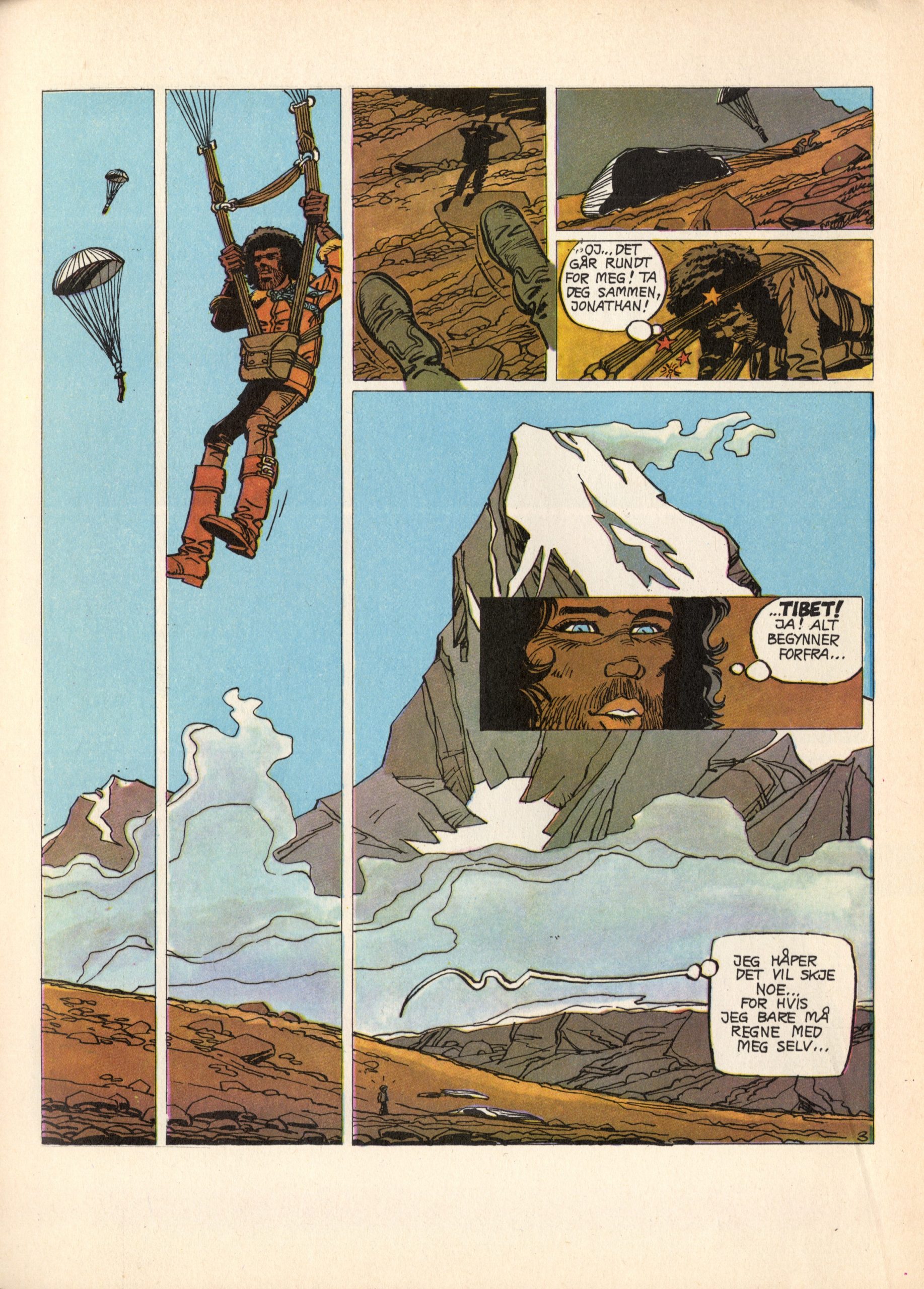 And my guess would be that Cosey would perhaps be slightly embarrassed to have figures like this in his comics now: 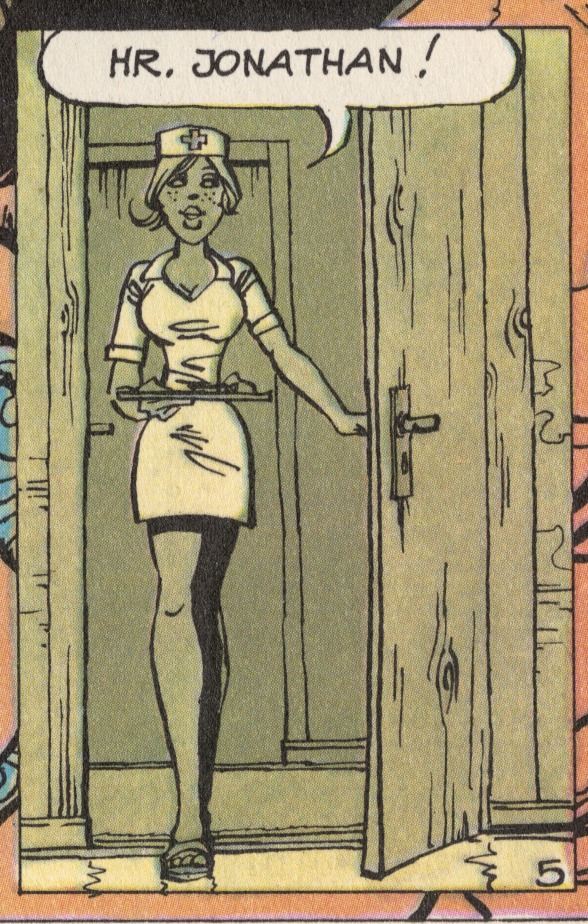 Anyway, what’s it all about? It’s about a guy from Switzerland, Jonathan, who’s lost his memory and is walking around Tibet trying to regain it. He meets people, some friendly and some hostile, and then he regains his memory. The end.

So you can see Cosey being quite deliberate from the start in making his protagonist not a typical hero, but instead a drifter on a physical and spiritual journey. And it works. It’s a very moving work, and it was an instant succcess (commercially and critically) when it was serialised in Tintin in 1975. And I must have liked it a lot as a teenager, too, since the first three Jonathan albums have been read to bits.

Cosey couldn’t resist giving his protagonist a kick-ass motorcycle, though: So some genre conventions were adhered too, at least. I mean, these are comics for children, really. But pretentious children.

One fun thing about this album series is that Cosey recommends music to go along with the reading. For this re-reading of the series, I’m following his recommendations, which means I’ll be listening to a lot of Mike Oldfield, Pink Floyd and Shankar today. (Through the magic of Spotify, since I don’t have any of that stuff.)

Music: I listened to Obscured by Clouds by Pink Floyd.

This album takes a slightly more mystical turn, while the plot gets more into the struggle against the Chinese. And Cosey loses some of the Derib influences, and starts putting borders on his pages: 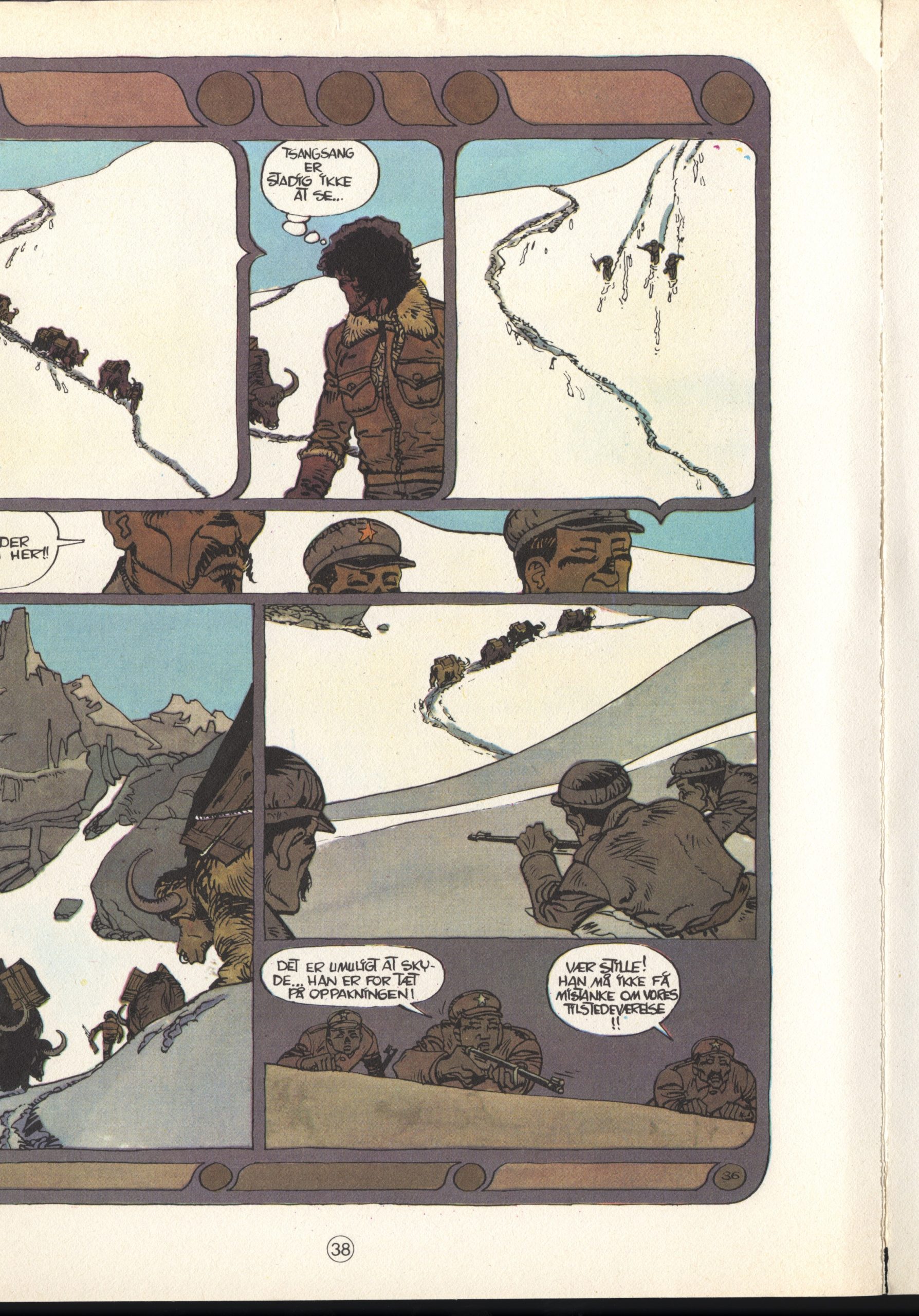 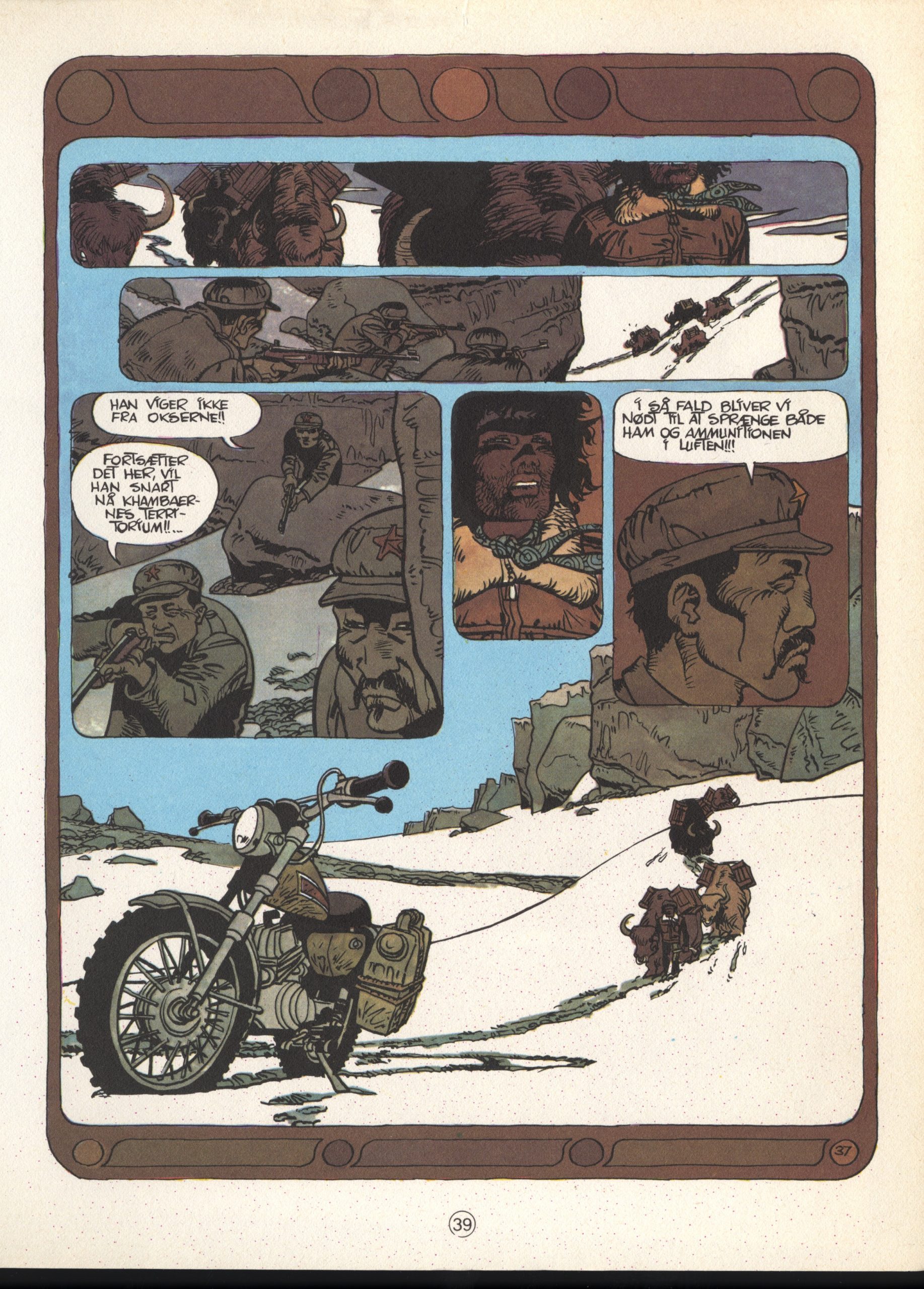 Amusingly enough, the Danish translator has included a little essay at the start of the album explaining the Chinese/Tibetan situation. He explains that Tibet was ruled by monk/businessmen who goverened city state temples that fought against each other, and that the Chinese were just helping redistribute the wealth from these incredibly wealthy people to the poor people in Tibet.

And that the rebels, the Khambas were trained by the CIA, and were generally misliked by everybody, especially the Nepalese, and they were all wiped out by 1972.

This is, to put it mildly, not exactly copacetic with Cosey’s take on the situation. Cosey’s Khambas aren’t exactly heroes, but the Chinese are definitely the villains. (Except the nice ones who desert.)

Music: I listened to Phaedra by Tangerine Dream.

I had forgotten how brief these stories are. Cosey uses the standard 46 page French children’s album format, and his pages leave a lot of breathing room, so there’s not room for a lot of plot. But he does pack a lot of emotion into the albums.

This means that reading the album takes a lot less time than listening to the recommended music, though, so I’m not getting the full Mike Oldfield experience… 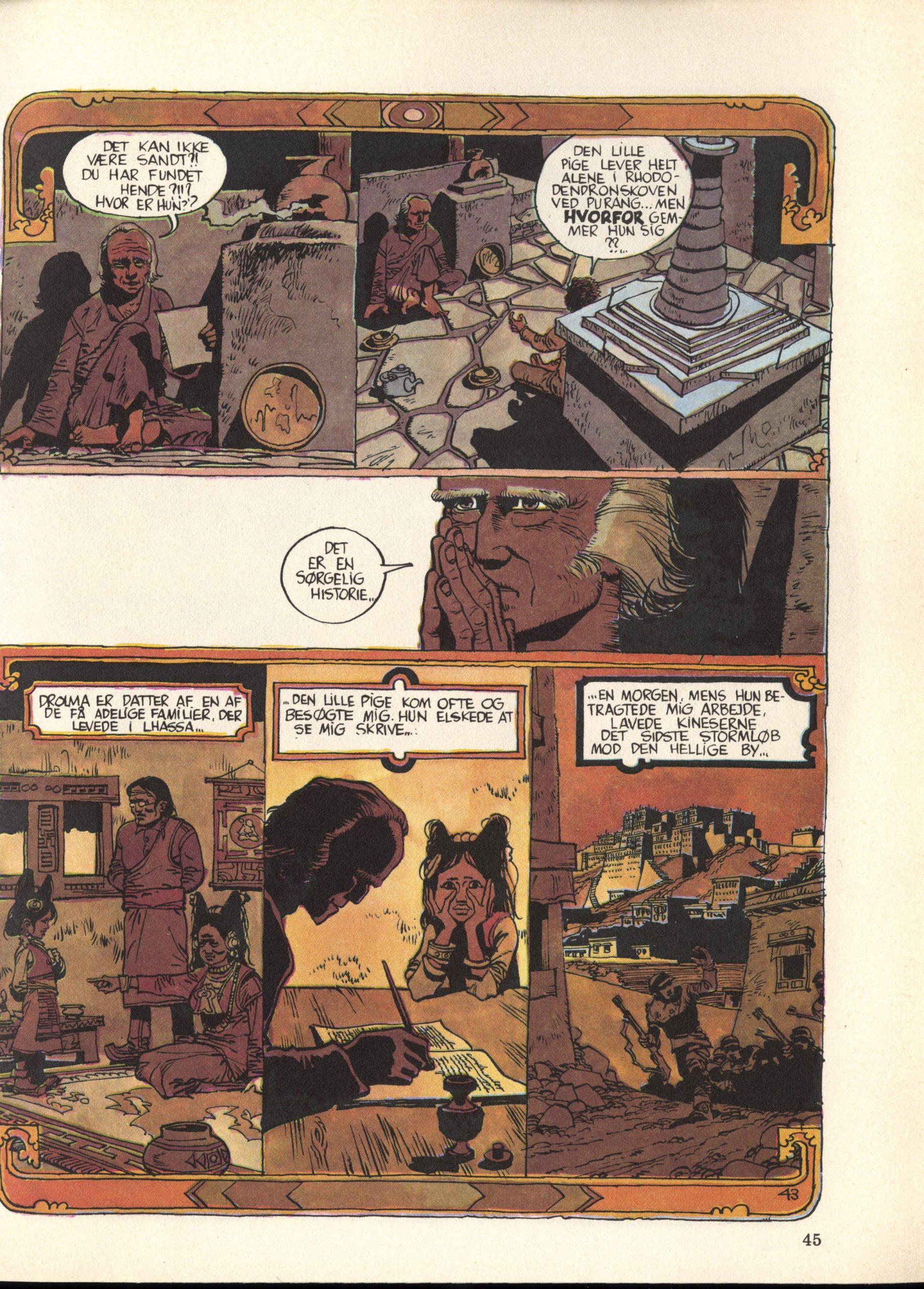 His artwork continues to shed the Derib influences. Perhaps he’s picked up some Moebius influences instead?

Music: I listened to Ommadawn by Mike Oldfield.

Jonathan leads a mysterious group of people through Tibet to a temple. Meanwhile, a monk has found a prophecy.

And the nurse is back — this time with human anatomy: 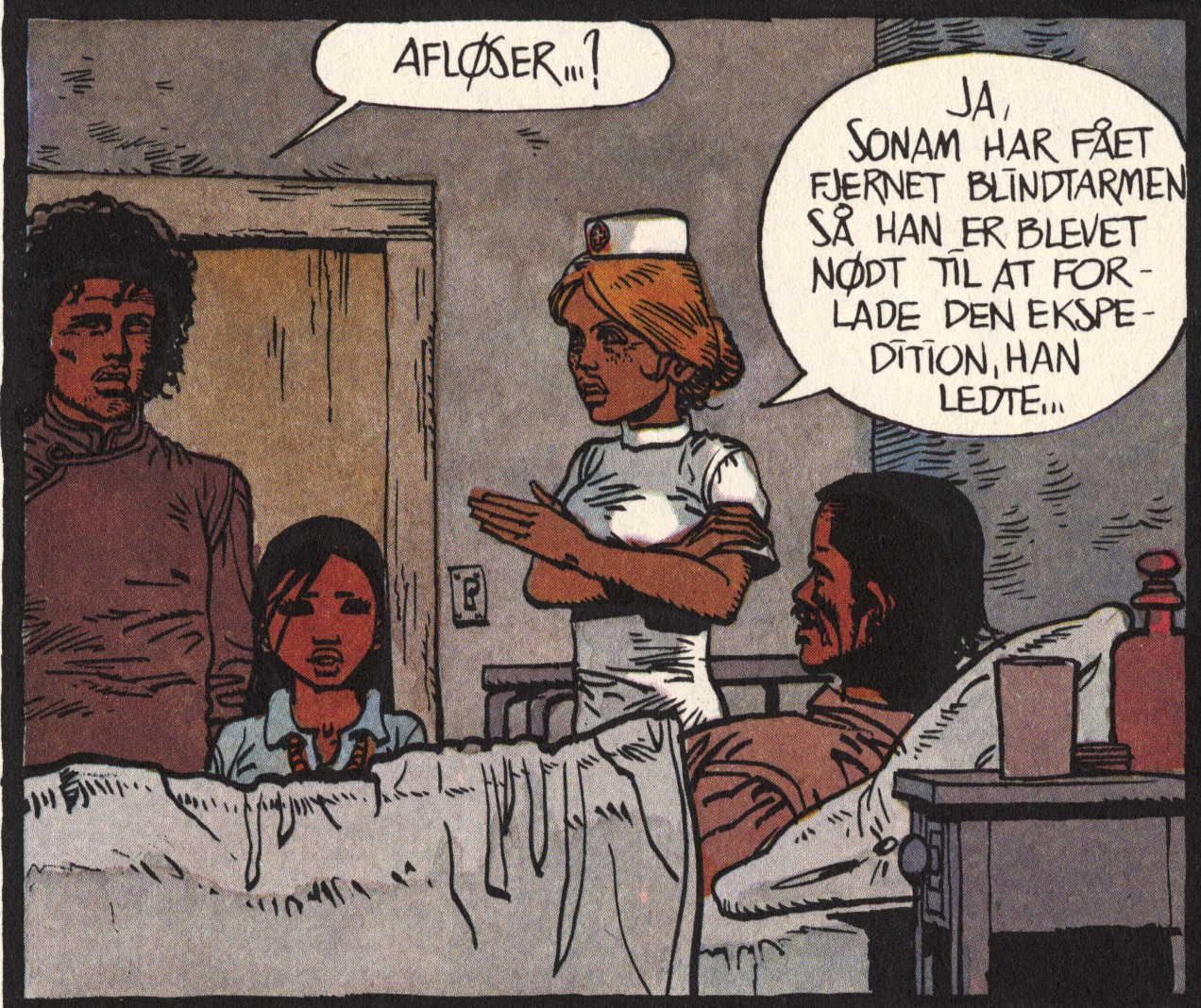 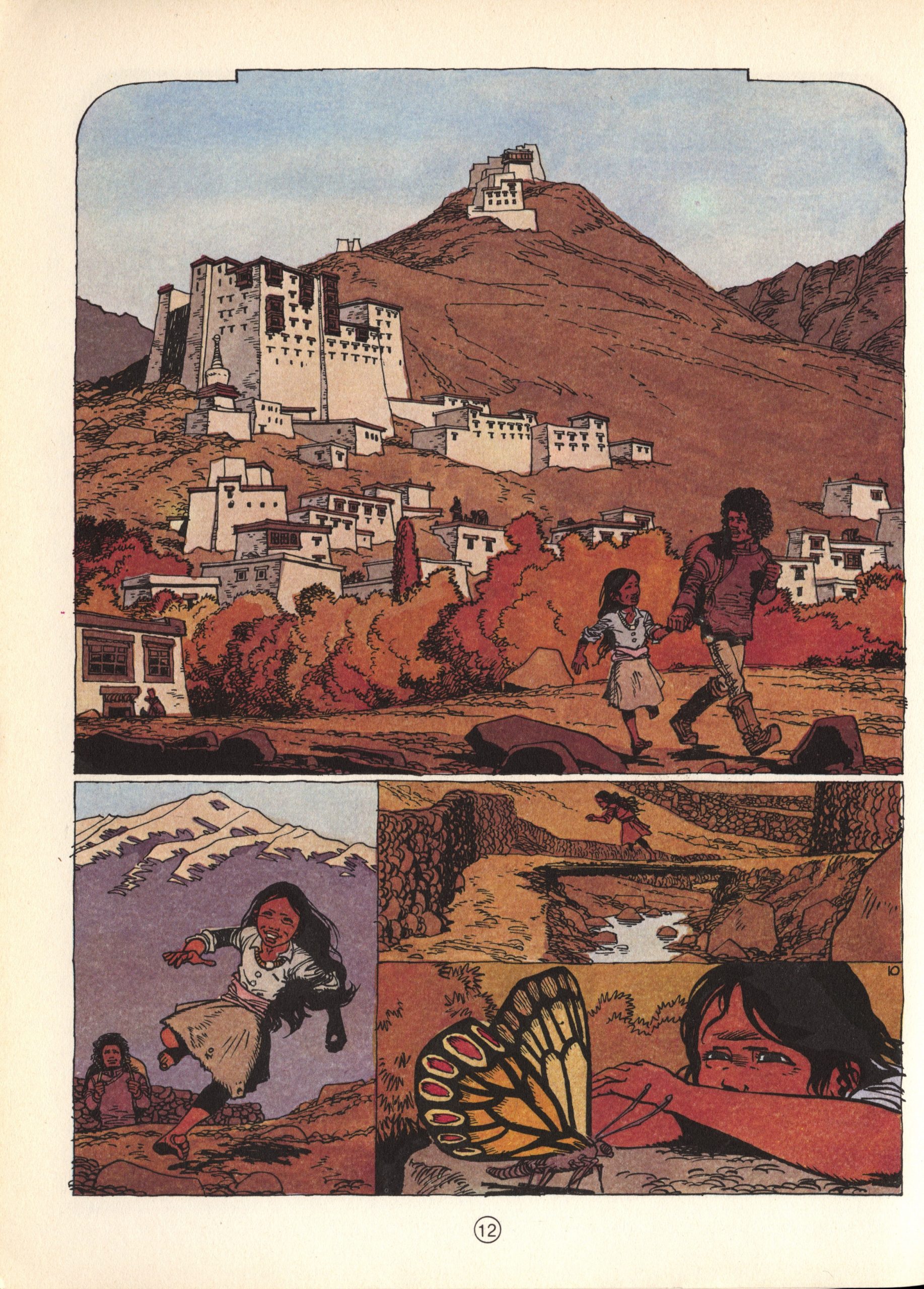 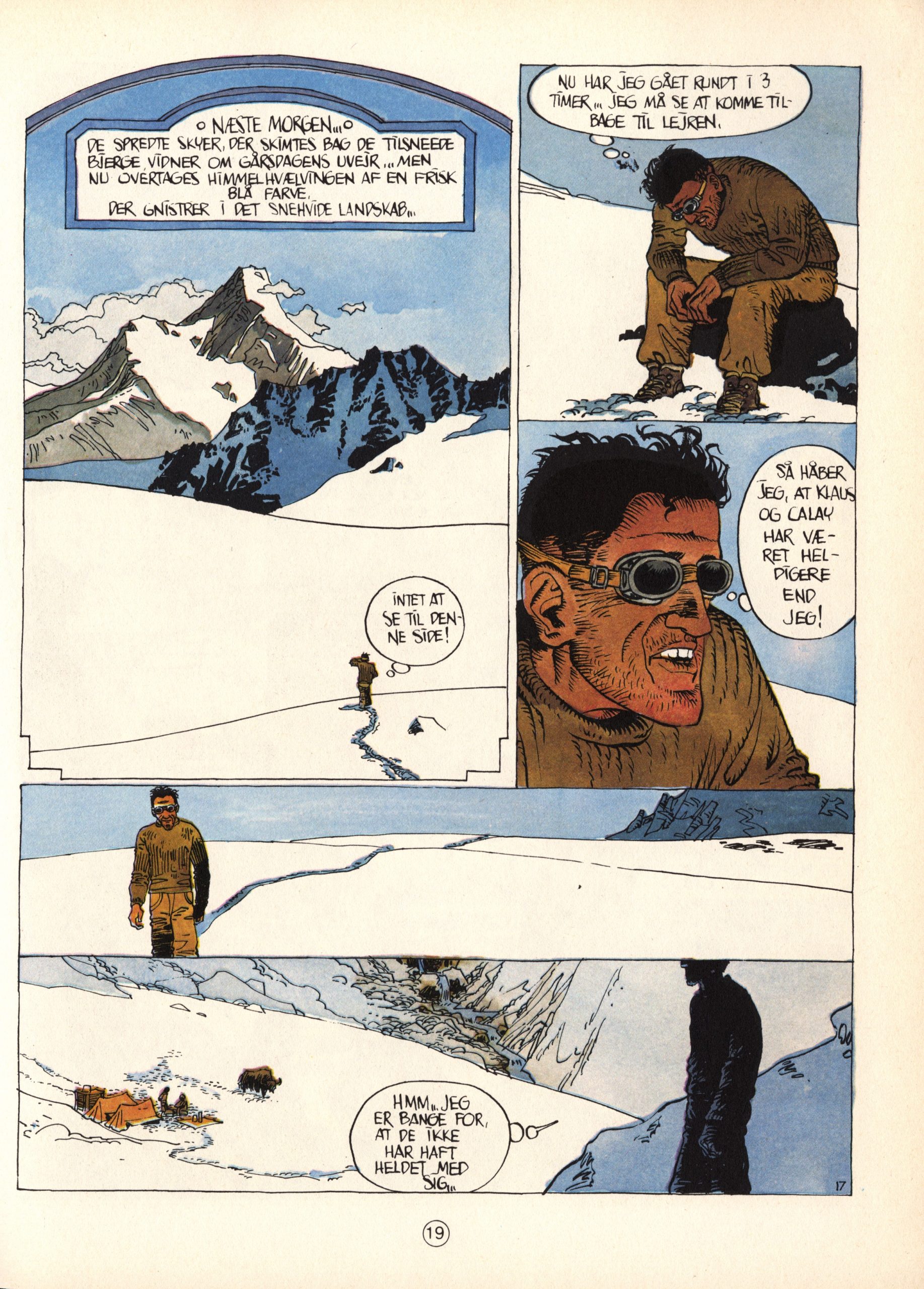 I had forgotten how adventure-oriented these albums are. Jonathan isn’t a total action hero, but he does do heroic stuff.

Music: I listened to Episodes by Mike Oldfield.

Jonathan meets an English general in the mountains. Hm… Jonathan’s head reminds me of somebody… er… who can it be… Oh, it’s this guy from the colophon page: 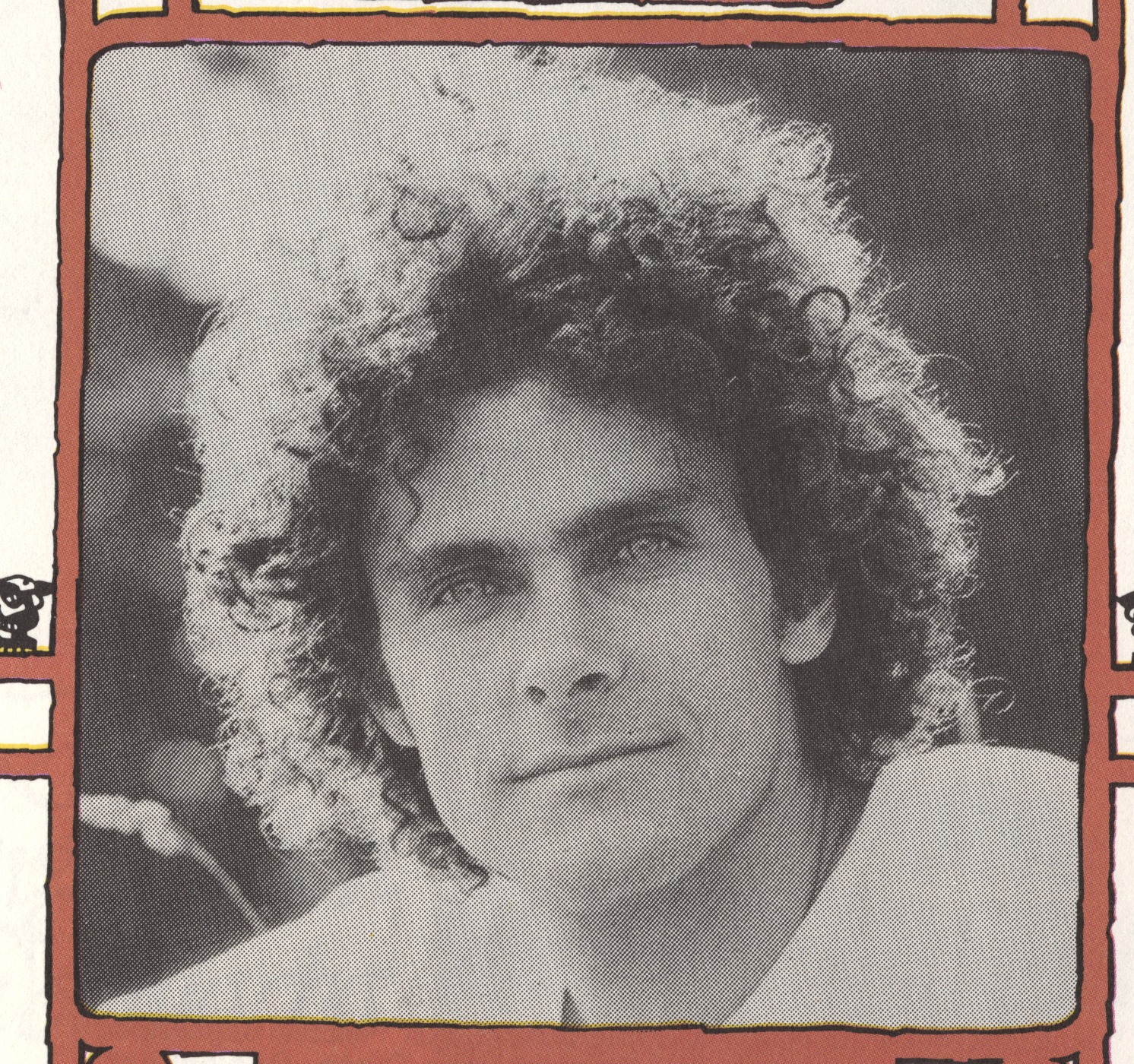 I guess it’s easier to draw the same face a lot if you can just use the mirror.

Cosey has a lot of plot to get through on these 46 pages, so the layouts get a bit more cramped, and with more dialogue. 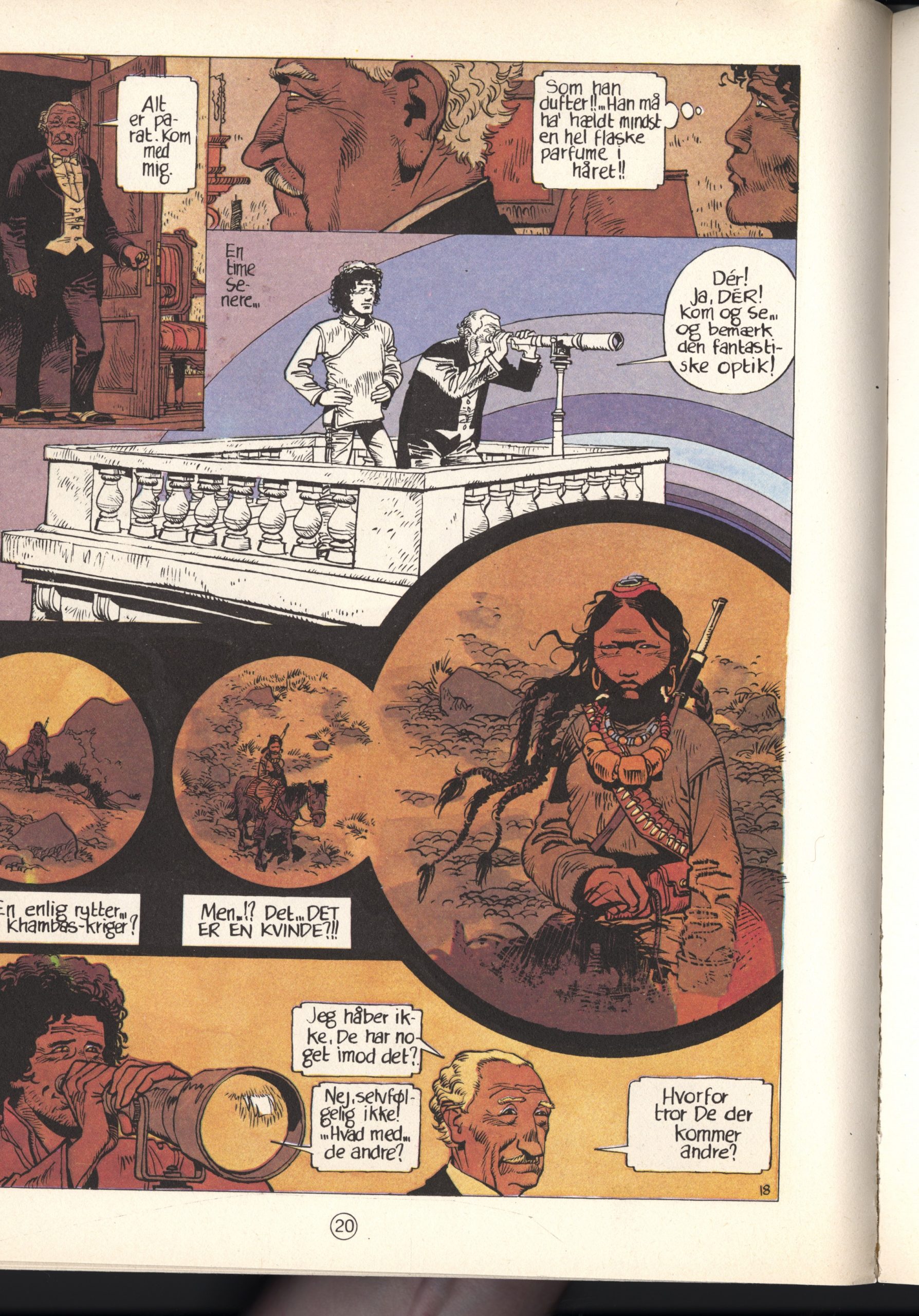 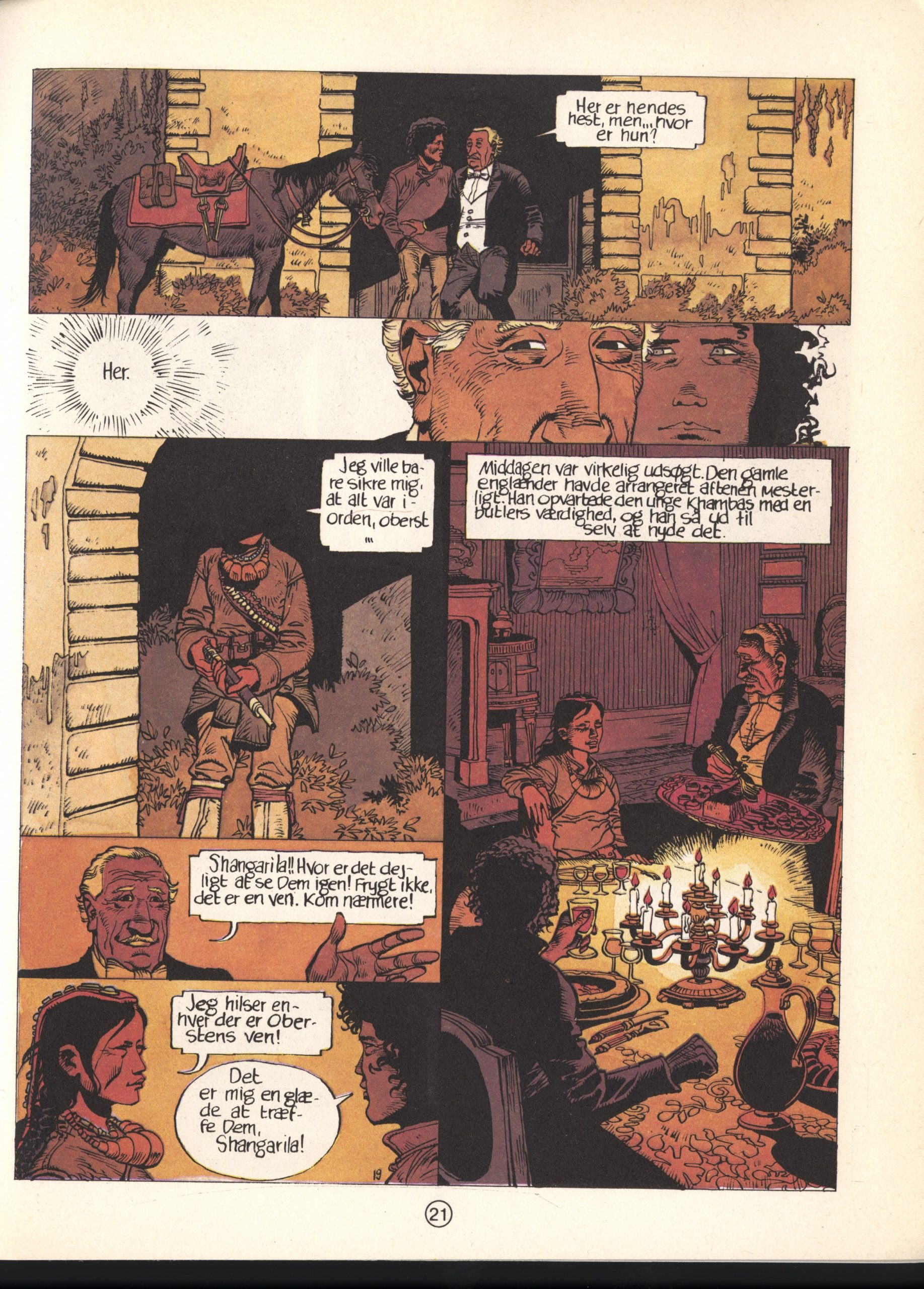 He still manages to get so much feels into the stories. There’s at least one boo hoo per album. I’m not quite sure how he manages to get away with that much sentimentality, but he does. It totally works.

Music: I listened to Concerto number 3 by Beethoven.

Oh, I forgot to mention that Cosey dropped the kick-ass motorbike pretty quickly. 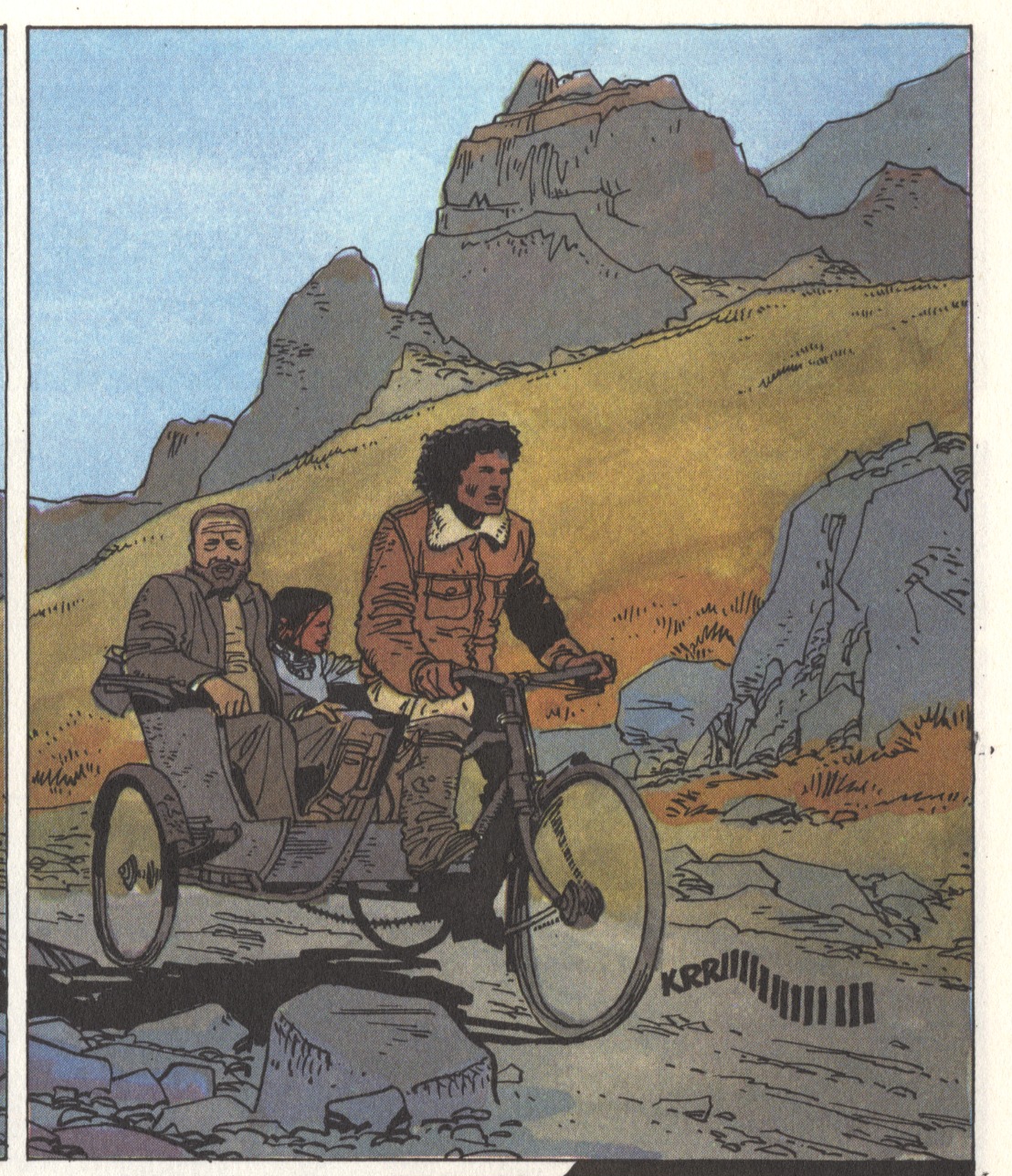 Anyway, in this album Johanathan and sidekick meets a Russian and smuggles him across the border. 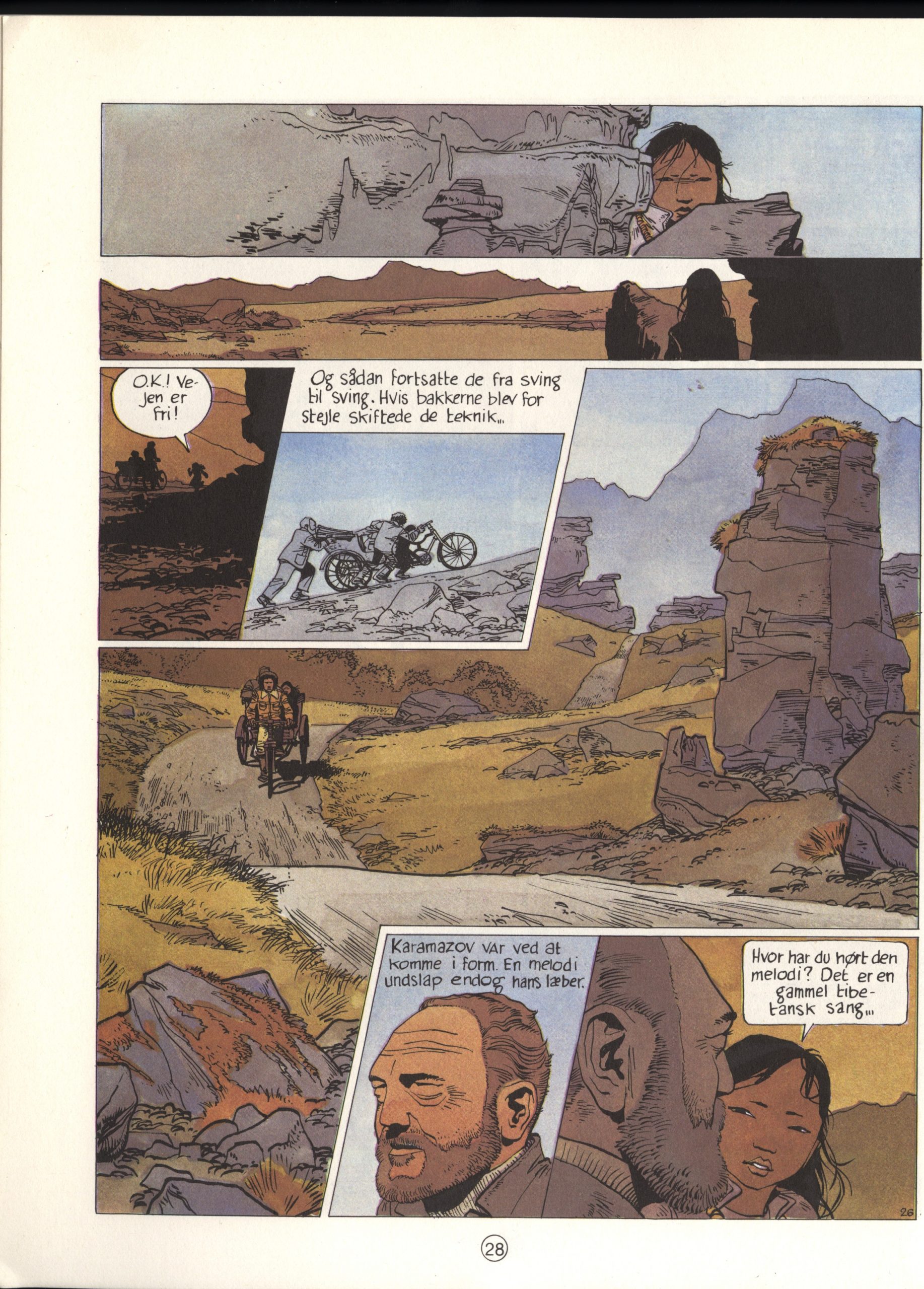 He draws lots of lines across the boulders, but doesn’t add any shadows. It gives them this etherial quality that’s very appealing. It suits the, er, etherialness of the plots.

Music: I listened to Arbour Zena by Keith Jarrett. To Cosey’s credit, he did not follow the MPDG standard plot to its standard conclusion. This album won the Alfred du meilleur prize at the Angoulême in 1982. I think that’s the “best album” prize? It’s easy to understand why — with a more standard plot and gorgeous art, it’s a crowd pleaser.

In addition to not doing the shadows all the time, Cosey’s also started to not spot the blacks here and there: 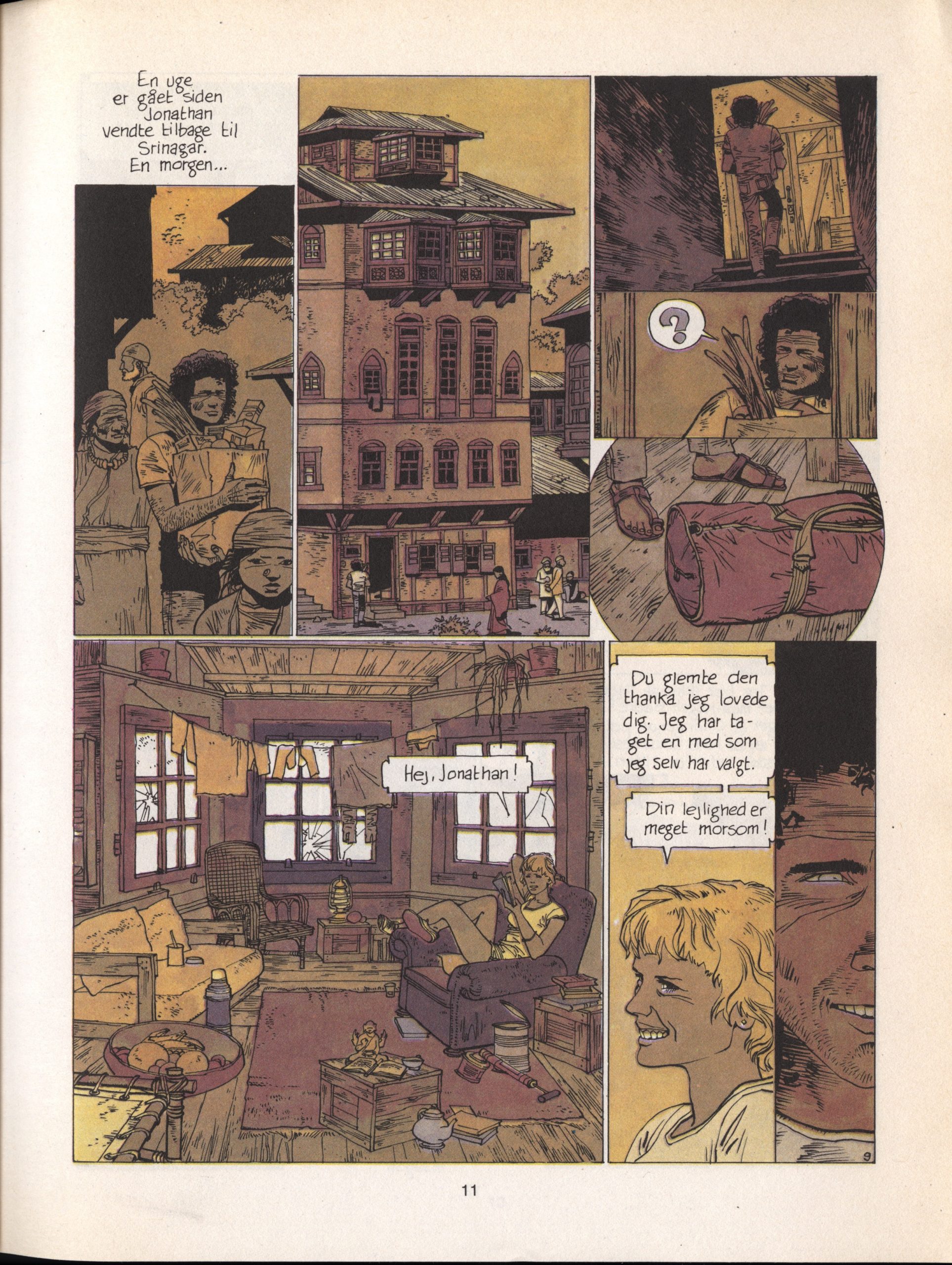 Looks very purdy, but perhaps slightly distracting when he shifts back and forth between spotting and not? I like it, anyway.

Music: I listened to The Freewheelin’ by Bob Dylan.

Jonathan starts making cheese (he’s Swiss, after all) and meets up with an alternative psychologist.

It’s perhaps not the strongest work in the series, but Cosey manages to subvert the expected storyline nicely, and makes fun of people into fad spiritualism. Or something. Which is unusual for Cosey — he’s usually into all that stuff. 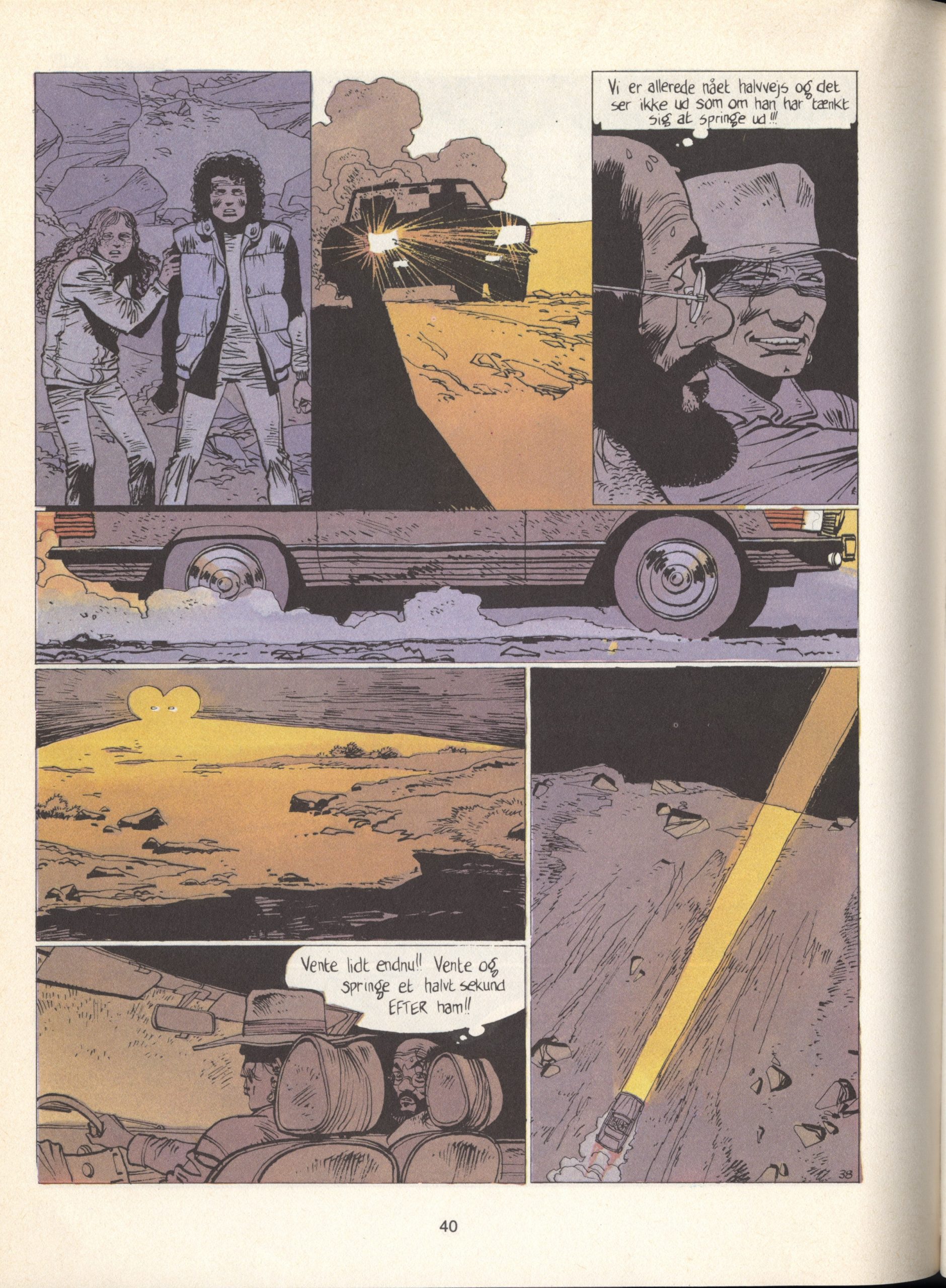 The art also seems to have reached a plateau. I didn’t notice anything much new in this album.

Music: I listened to Ambient 1: Music for Airports by Brian Eno.

By this point, Cosey was growing tired of doing Jonathan and wanted to start making other stuff, but his publisher convinced him to continue churning out stories. So, once again, Jonathan picks up some strays and walks around a lot. 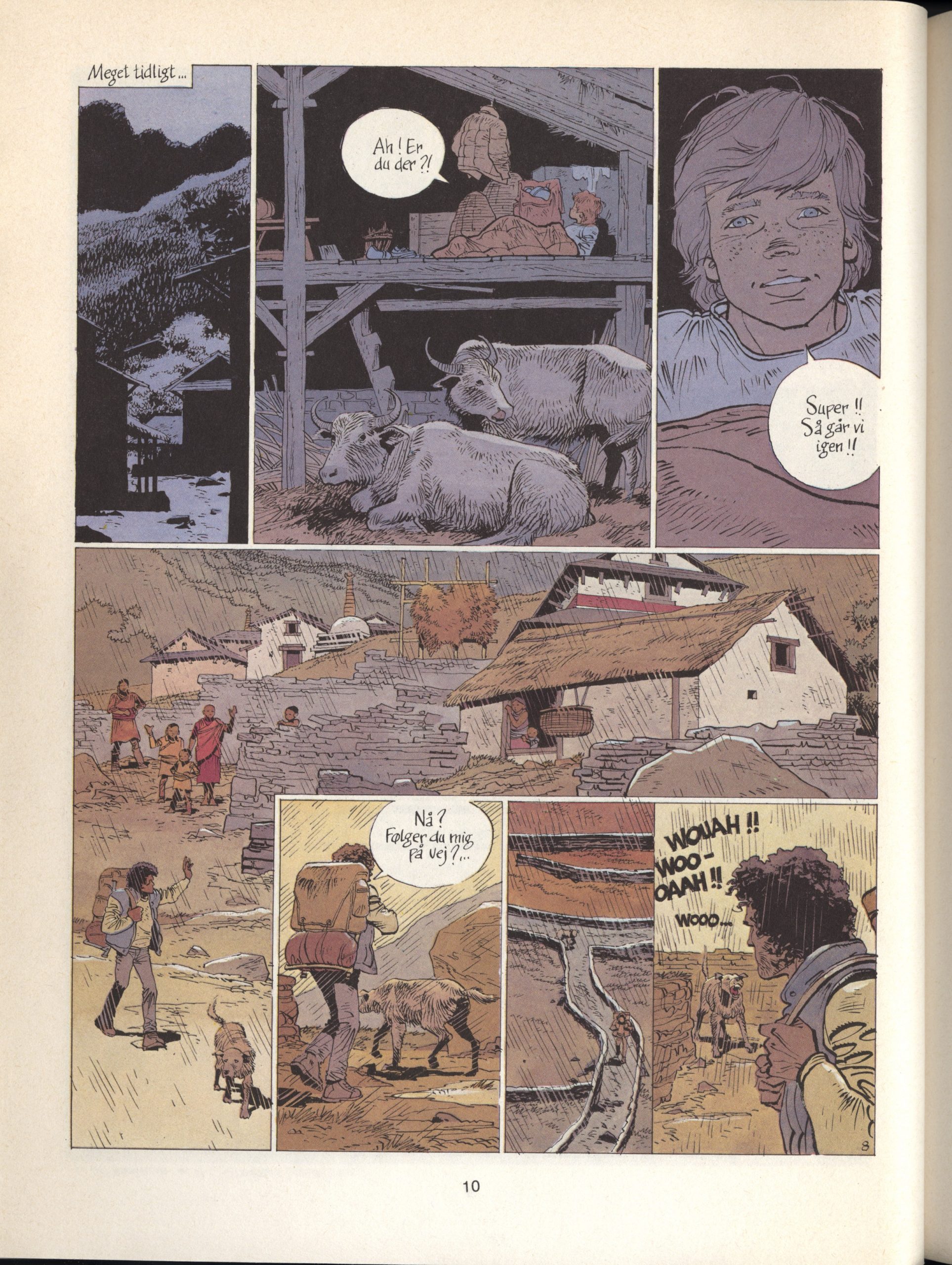 Oh, well. It’s a perfectly nice album, but there’s not a lot there there.

This is the final Jonathan story serialised in the Tintin magazine.

Music: I listened to QE2 by Mike Oldfield.

Cosey managed to publish In Search of Peter Pan before returning to Jonathan. Instead of taking place in Tibet, as usual, it’s set in New York, and is essentially a hard-boiled crime story, replete with private investigators, kidnappings and a race against the clock.

It’s a two part story, too — the first in the Jonathan oevre. So, basically, it has very little in common with any of the previous nine Jonathan albums, and is, perhaps, another sign that Cosey was just fed up with the Jonathan series. 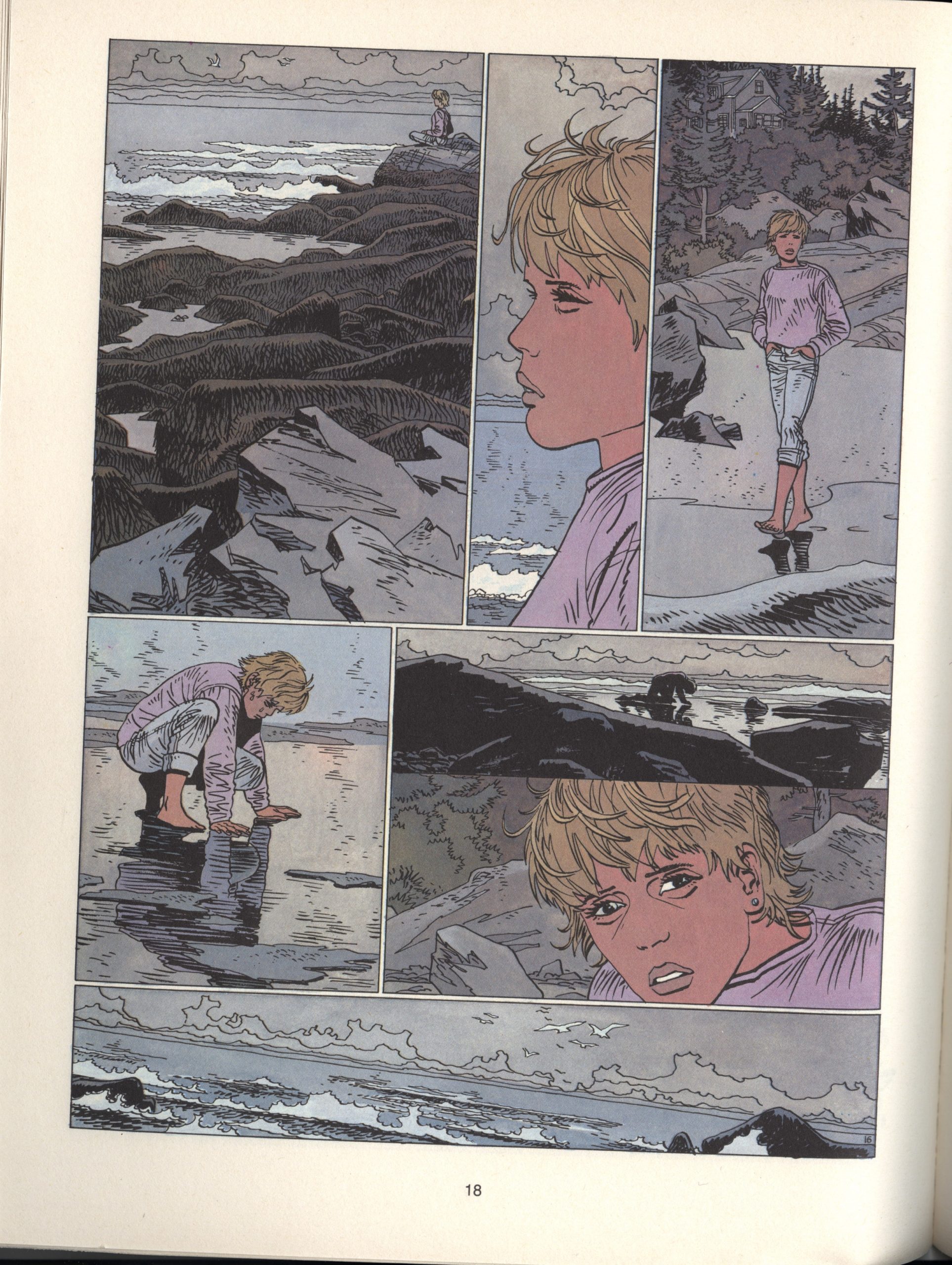 Another sign is that this was the last Jonathan story Cosey did for a decade.

While Cosey manages to avoid taking all the noir cliches to their usual conclusions, it’s not a particularly memorable or gripping tale.

Music: I listened to American garage by Pat Metheny Group and Old Days by Neil Young.

12 years later, Cosey returns with a 64-page Jonathan album. It deals with Chinese repression of Tibetans, and that’s basically it. It’s kinda boring. The artwork manages to look both more sketchy and stiffer at the same time, which is a bit odd. But the colours are nice.

Cosey has continued to make Jonathan albums — four after this one, the last one from 2013. None of them have been translated to any language I’m able to read. Which may or may not say something about the (lack of) enthusiasm generated by this album.

So, is it any good? Yes, the first nine albums are very good comic books. Especially if you’re 14. They have the perfect mix of emotion, wonder, silence and action. I probably wouldn’t have included them in this (public) re-reading if I had remembered them better, though. Just as I won’t be including Valerian or Simon: They just aren’t all that interesting, in a way? Entertaining, but not interesting.

One thought on “BD80: Jonathan by Cosey”