Ever since Google Adwords dumped Gmane for reasons, Gmane hasn’t had any income.  It doesn’t really matter that much, but I find it annoying.

The Gmane web site has some traffic. 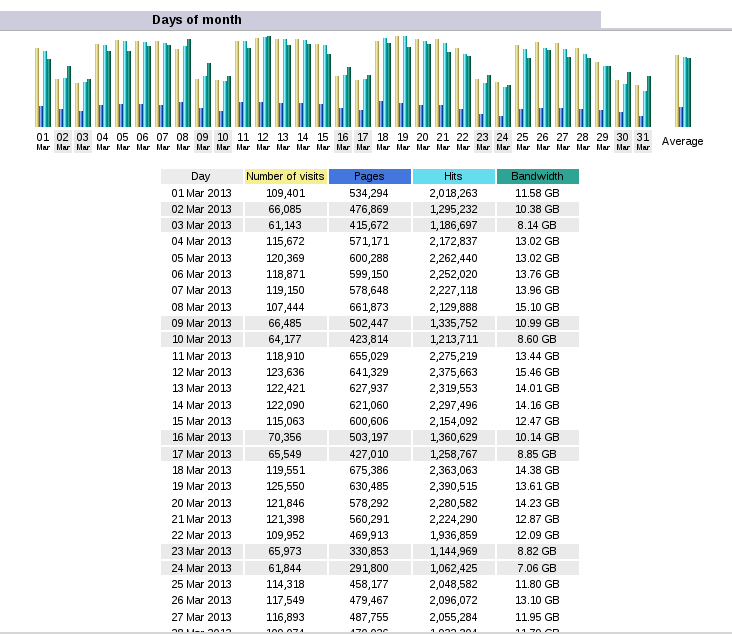 About half a million page views per day.  Surely there’s $$$ in that.  Not that I like ads.  I think ads are yucky.

I signed up for Google Webmaster Tools to see if it had anything interesting to say.

I’m going to digress a bit.  Google sucks.  Has anybody noticed?  They make a bunch of things that are barely good enough, and then they don’t improve, in general.  Take the Webmaster Tools signup process.  Please.  Gmane has a bunch of different sub domains, and they all have to be signed up separately.  Geez.

But I got it done, and then removed the hacks to make it work.

Uh-oh.  If the files aren’t there, then they’re “unverified” after a while, so I stop getting stats.

Anyway, I left the file in place for blog.gmane.org (by accident), so I’ve got some stats there:

After fifteen minutes, I’m still not sure, but some people seem to say that “impressions” means that Gmane was included in the search result on some page or other.  The page displayed, perhaps?  And “displaying 60K” is a mystery.  It might be the things included in the list below, but I don’t know why they’re only displaying 60K, or what the criteria is.

Then there’s “Clicks 200K”.  So 200K people clicked on a link to Gmane?  Again with the mysterious “Displaying”. 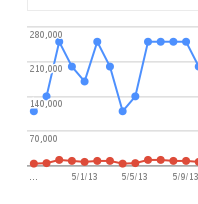 I love the Y axis here.  Choosing 70K as the scale here instead of the more traditional 50K is a daring, avant garde choice.  Or perhaps they just don’t care.

Anyway, interesting as all this may be, it doesn’t really give me any money.  So I signed up with the Amazon ad network.

They have a wonderful product called “omakase”, where you just put the ad JS into your page, and then they spider your page and put relevant stuff on your page.

So let’s look at the relevant ads on gmane.linux.kernel now: 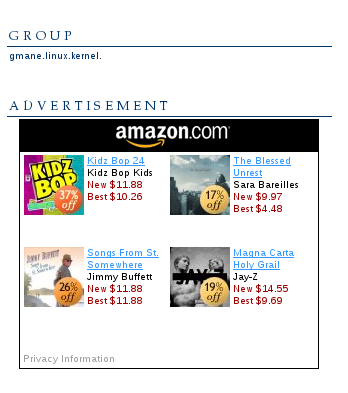 Amazing.  I didn’t know that so many Linux kernel hackers were into Jimmy Buffet and Jay-Z!

But looking at the logs, I can’t really see any activity from the Amazon omakase spide, so perhaps it’s not so surprising after all.

Anyway, it’s not that this is that important, but it’s…  annoying.