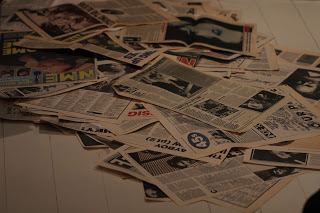 I also used to buy lots of British music papers.

Rooting through the basement storage here today, I found a cache of snipped 4AD-related articles and reviews that I had apparently collected back then, but had never done anything with.  So I thought I’d just scan them and assemble them into PDFs.

The scans should probably be cropped for easier reading, so I was thinking about writing an Emacs-based image cropping mode.  But then I thought “eh”, and wrote this teensy little library that just queries you for file names, and then uses the Gimp to do the cropping.

Gimp supports opening several files “remotely” (i.e., without starting a new instance for every image), so this turned out to be a workable way to, er, work.

The time period turned out to be 1989 to 1993, which isn’t the prime period for 4AD by any stretch of the imagination.  Half the articles are about Lush, I think.  I mean, I love Lush, but, you know.

So there you go.  Enjoy the fabulous early-90s British music journalism.

I should fold these into the general database, but that would mean getting the C++ program I wrote in 1989 to compile now, and that’s not…  fun…