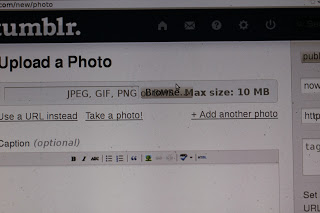 I was reading this story on Hacker News about how awesome Tumblr is.

It’s kinda fascinating.  It seems like lots of people on Tumblr is extremely rah rah about Tumblr itself.  You don’t really see people on Blogger or WordPress yattering on about the platform.

But I created a tumblr myself a while back to post even randomer pictures and stuff.

And the sign-up process is a complete mess that I still don’t remember how I got through in the end, involving emails that contained links to nowhere.

And the user interface is a total clusterfuck.  As illustrated in the picture above, if I want to post a picture to my tumblr, I have about one pixel where I’m able to click to upload a picture.  (Granted, this is from a pretty weird laptop with a 1600×768 screen, but still…)

And after I’ve uploaded it, there’s no easy way to get a direct link to the post itself.

So it’s all very confusing.  Are the rah rah tumbler people on acid?

Either I’m missing something, or the entire UX is totally eww.

Perhaps I’ll give hipstagram a try…