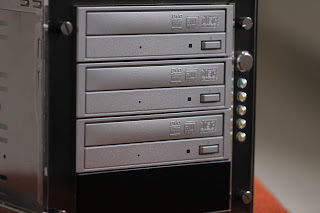 Once upon a time, I had a nice Hush machine with a PCI slot.  It had a SATA Multilane card in it, connected to an external box with three SATA CD-ROMs installed.  I used it to rip the CDs I bought so that I could listen to them.

It was perfect.  It was rock solid.  It was fast.  I got reading speeds of 50x — from all three CD-ROMs simultaneously.  So I got an aggregated speed of 150x when ripping a lot of CDs.  Life was wonderful.

Then the Hush machine died.  And I bought a new, spiffy machine.  That only had a PCI Express slot.  But it had USB3 and E-SATA.

So I first tried connecting the CD-ROMs via a mixture of USB3 adapters and E-SATA.

It kinda worked.  Ripping speeds were not impressive, but OK.  But it was unstable.  It would totally crash the machine like every twenty minutes.

So I tried going with a pure USB3 solution.  Good reading speeds, but equally unstable.  My guess would be that extracting audio from CDs via USB3 hasn’t received a lot of testing in Linux. Which is understandable, but it still sucks.

Next, I noticed that the Addonics web site listed a SATA Port Multipler/USB3 backplane.  It seemed to say that it would allow just using a single USB3 port, and access all the CD players.  Perhaps that would be stable!

Unfortunately, I didn’t read the fine print.  Accessing the drives individually was only possible when using the SATA Port Multiplier interface, and not the USB3 one.

So I bought a SATA PM-capable card, since the Intel SATA chipset doesn’t do PM.

It almost fit into the machine when I removed the bracket.  And it worked!  And was totally stable.

Unfortunately, it’s dog slow.  When ripping a single CD, I get only 20x.  When ripping CDs in parallel, the speeds vary a lot, but ends up evening out at 8x.

Which brings us up to date.  Today I got a PCI/PCI Express adapter, which  would allow me to try using the old SATA Multilane card.

Now, installing all this into the rather small machine took some… persuasion. 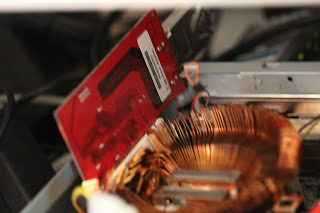 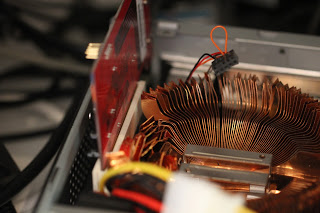 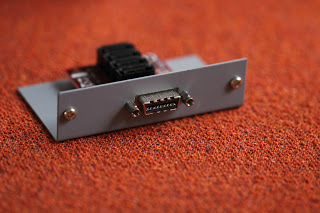 I installed the Multilane backplane back into the CD-ROM box. 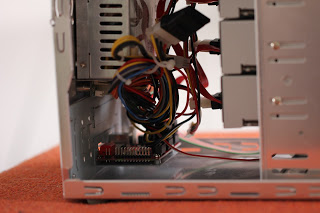 It’s stable.  It doesn’t crash.  But it’s slow!  Slow!  Ripping a single CD gives me 26x.  Ripping three ones in parallel gives me 10x per CD.  So it seems like it tops out at a bandwidth of 30x aggregated.  That’s pitiful.  My old machine gave me 150x.  Is that progress?

I almost feel like giving up and try to refurbish an old Hush machine, but I’m not sure I have the stamina.