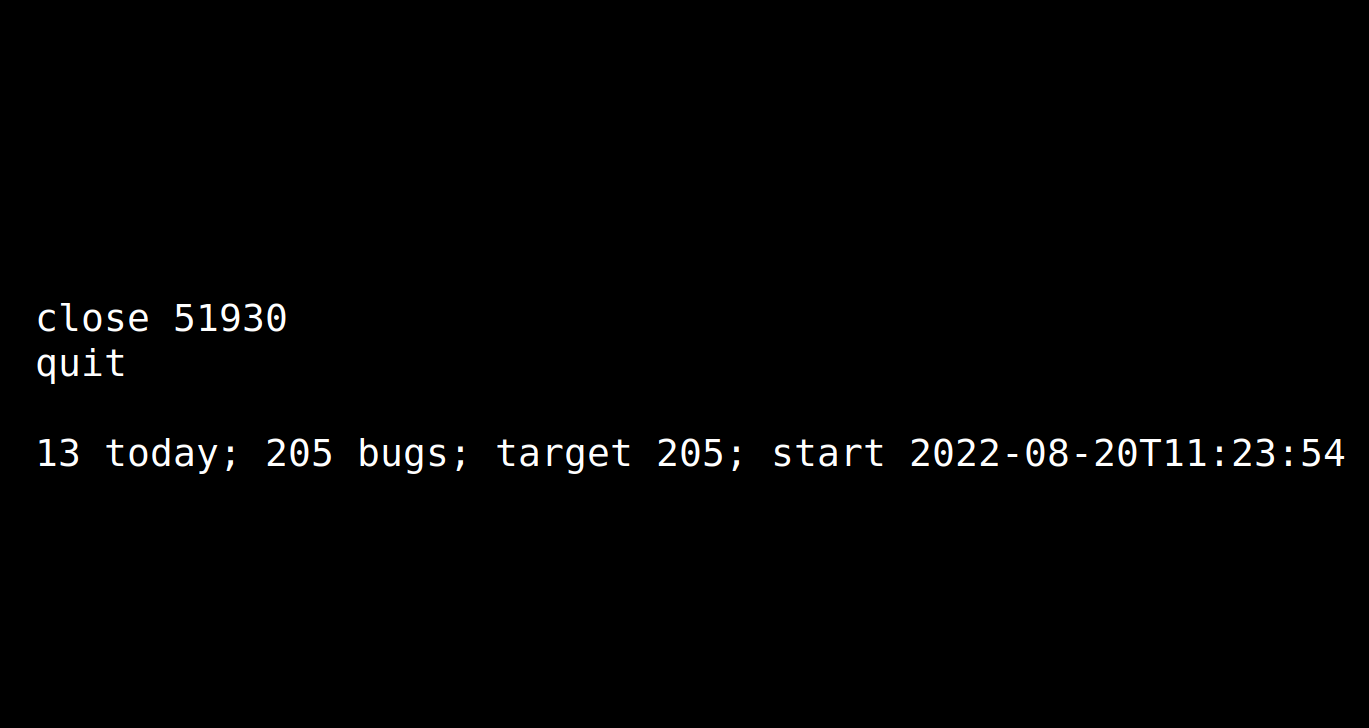 It feels like I did one of these posts just the other day, but it was a month ago? Time sure does fly…

Since there’s a round number in the title of this blog post, perhaps I should natter on a bit more than usual? Sure! If you insist!

So: This is part of a series of posts where I bloviate on how Emacs development is going, partially through gamification of the Emacs bug tracker. This round, 10% was 205 bugs, so we started at 2050 open bugs, and after closing 10% of those, we’re now at… 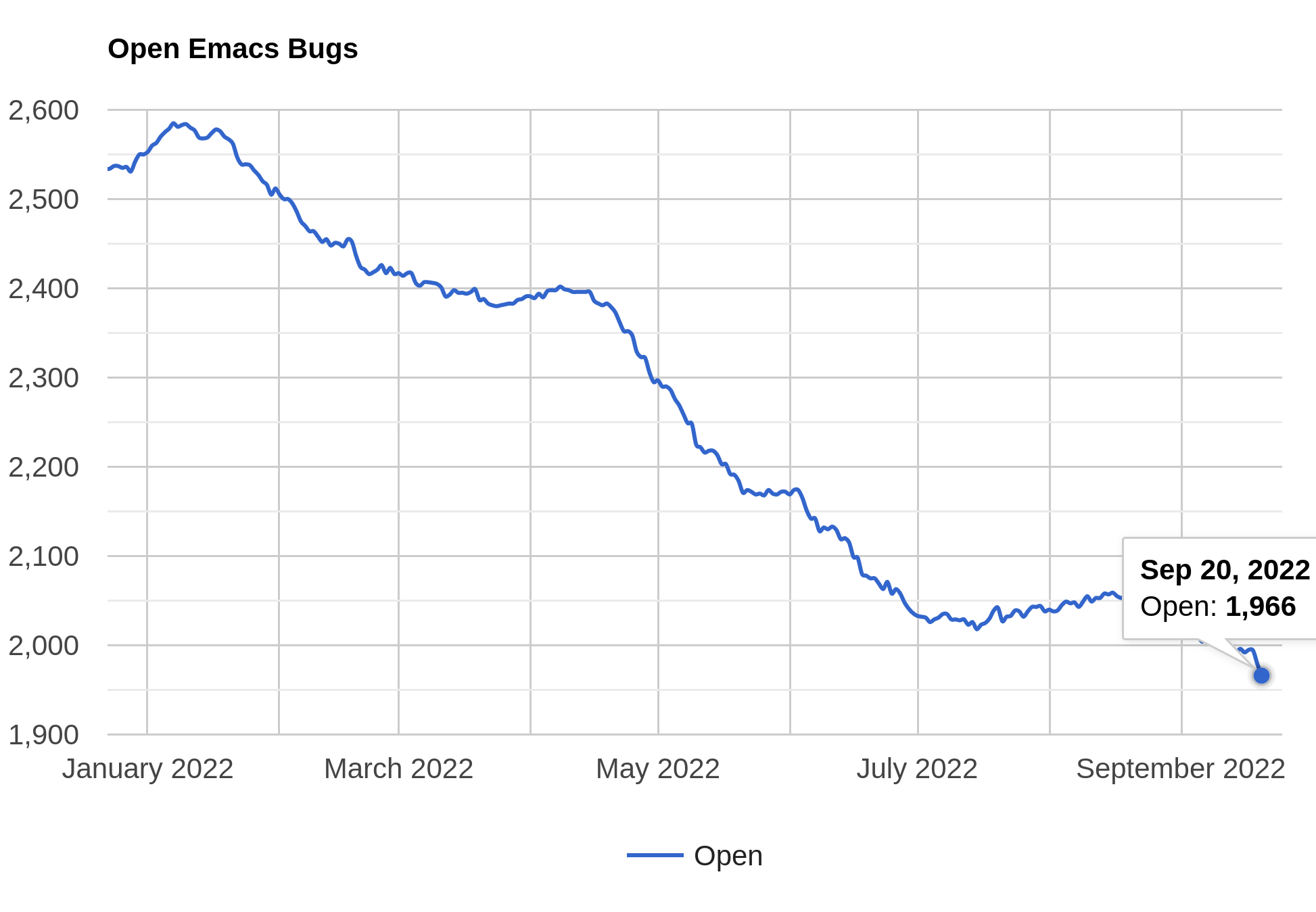 1966 open bugs! Well, that’s a decrease, at least — we had an increase in the previous stretch. 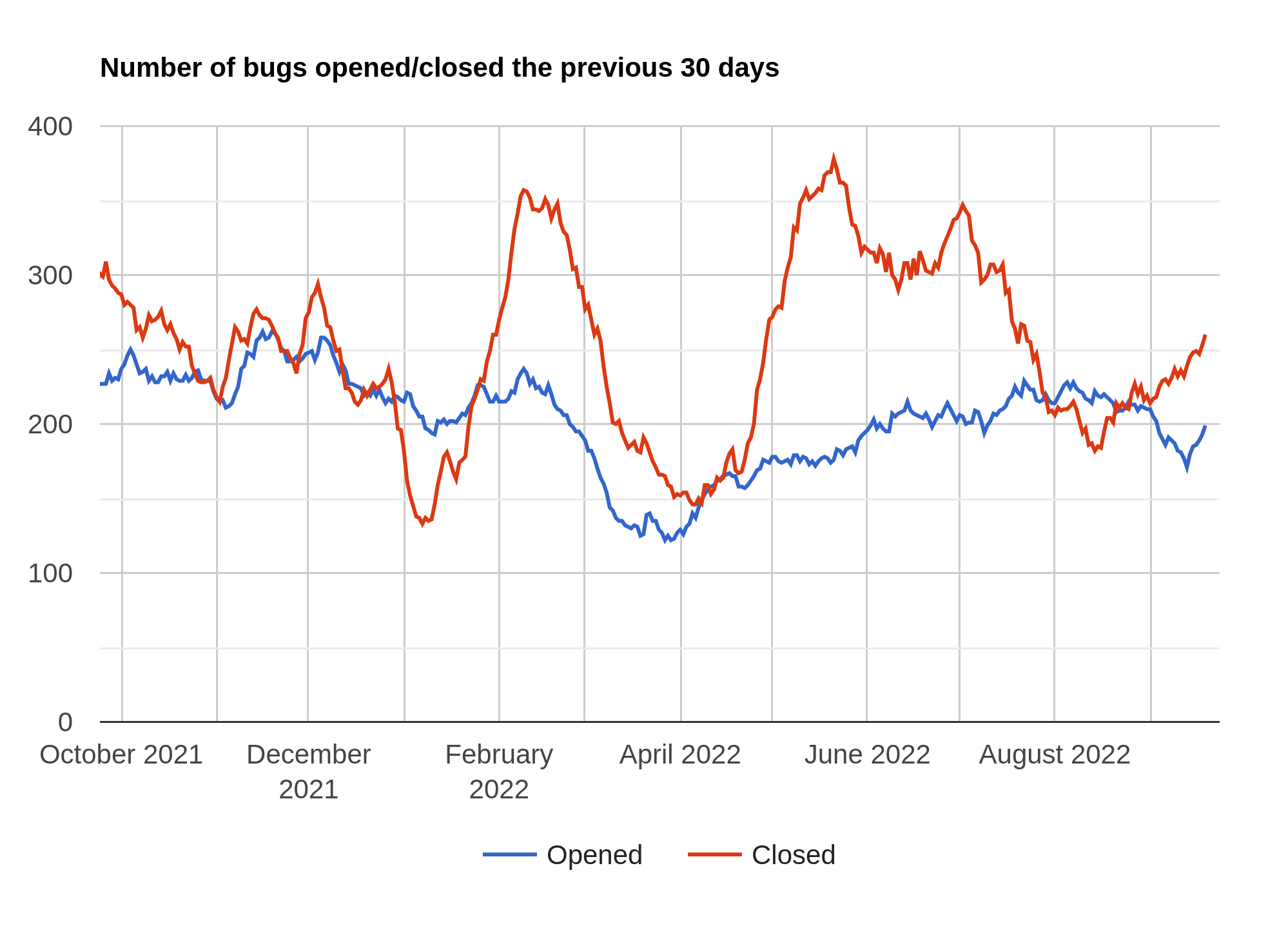 But as you can see, I got my act together and did some actual work.

Most of it was just the normal, eh, whatever, but I also went through all the bugs that were tagged as having a patch, and…

… applied a bunch of those. (But a surprising number, perhaps a quarter of those closed, had already actually been applied, but then discussion had just gone on to other things and nobody remembered to close the door after they left.)

As you can see, it’s been almost a year since the last time somebody took the time to do some triage on the patch reports, and that’s really too long — I found stuff in there that should have been applied a lot speedier, but… 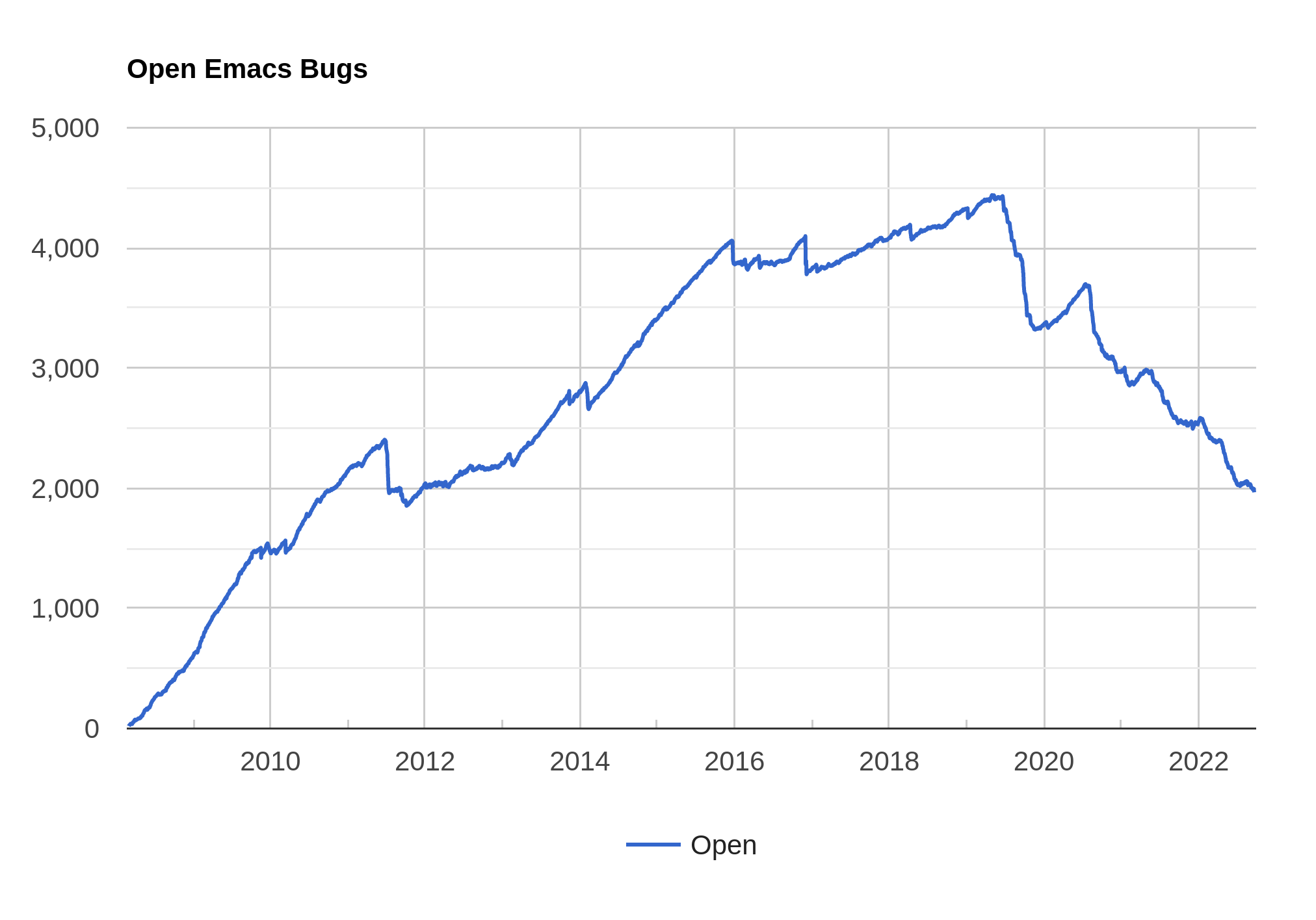 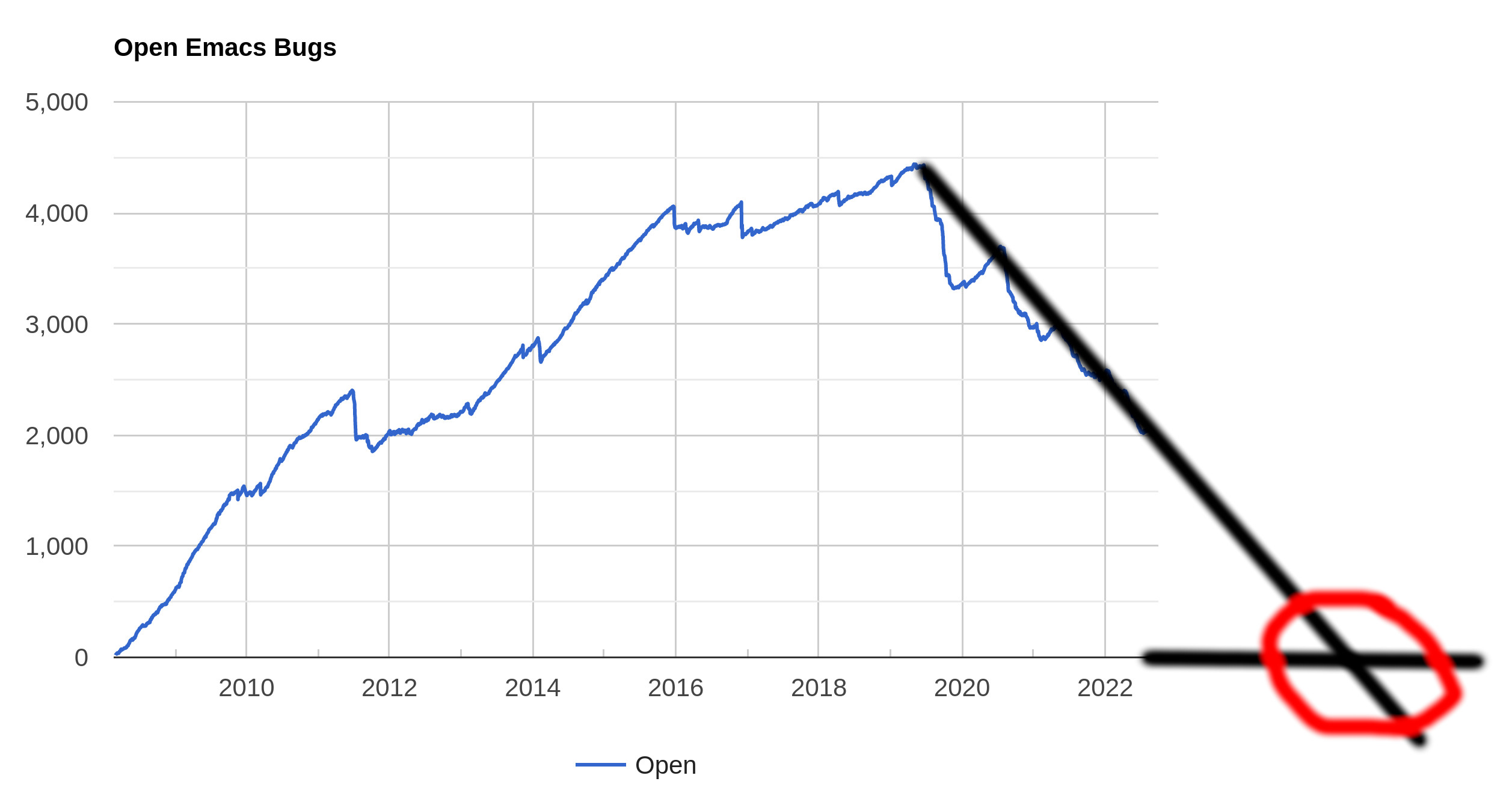 As you can clearly see, by using quadratic linear regression we will be at negative 500 in 2026, and to achieve that at that point, I’ll have to start opening bug reports instead of closing them.

That’s mathematics for you!

Anyway — has Emacs gained any new and exciting functionality over the last month? Er… Let’s look at the NEWS file.

Oh, yeah, there’s new branching commands for VC mode under C-x v b. But more significantly, there’s C-x v v in diff buffers (courtesy of Juri Linkov), which allows you to selectively commit things. It’s very convenient — for instance, if you’re working on something bigger in a file, and then see an unrelated typo in that file, you can now commit that unrelated thing in a separate commit without having to stash anything first. It’s very convenient for us that futz around a lot.

We have a new package for setting wallpapers on desktops directly from Emacs and image-mode (courtesy of Stefan Kangas), which is quite convenient.

I finally incorporated the image cropping/cutting code I wrote a few years back.

But since this is a round-numbered 10% post, let’s look at more stats. Let’s see… Oops! Found a bug in the stats generator, so if I’ve posted charts like this before, they’ve been er wrong.

But here’s the full overview of contributors per month, going all the way back to 1985:

Which is misleading as ever, since the VC (ahem) didn’t really keep that much track of things back in the 80s. But the last few years should be reasonably accurate:

And… It’s looking OK. We’re up from about 45 to about 65 per month over the last five years. (Note: Expert cherry-picking of dates; I’m an ex stock broker after all.)

But what about the number of commits instead?

Yowza. People have been busy. Let’s zoom in:

700 commits per month? We seem to have more than doubled the er development er velocity? I didn’t really know that, actually…

A couple old Emacs stats posts went to HackerNews and reddit, which totally makes the WordPress stats unreadable for normal days for a month. Fie!

And that’s it for this chart-heavy extravaganza.