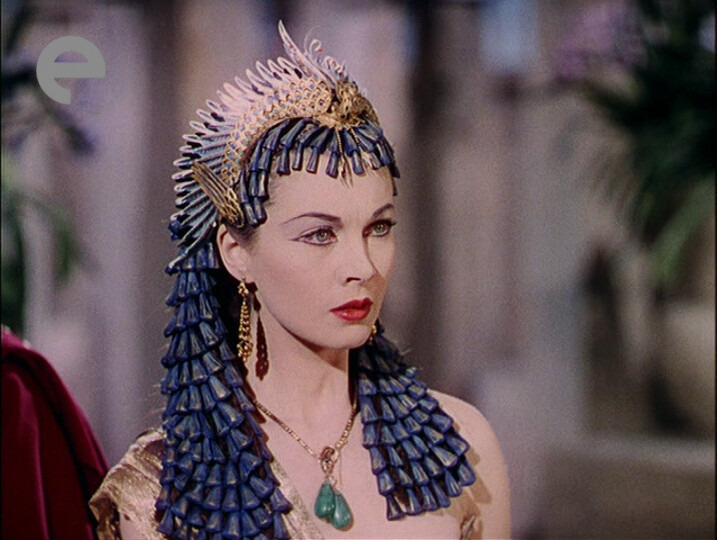 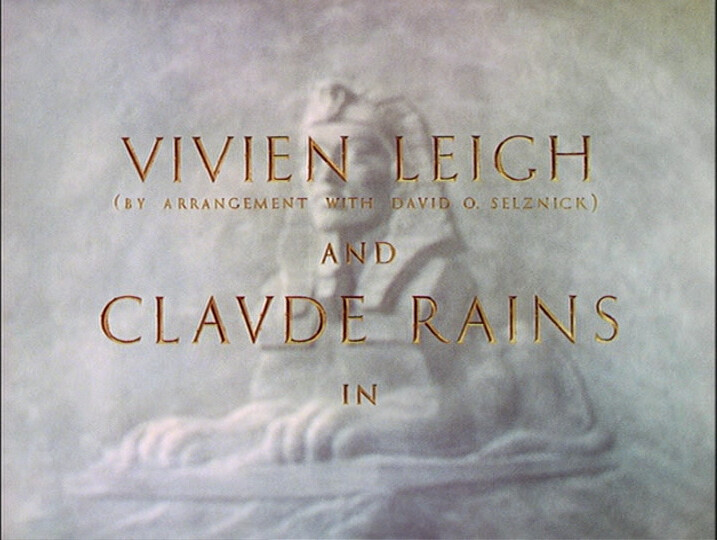 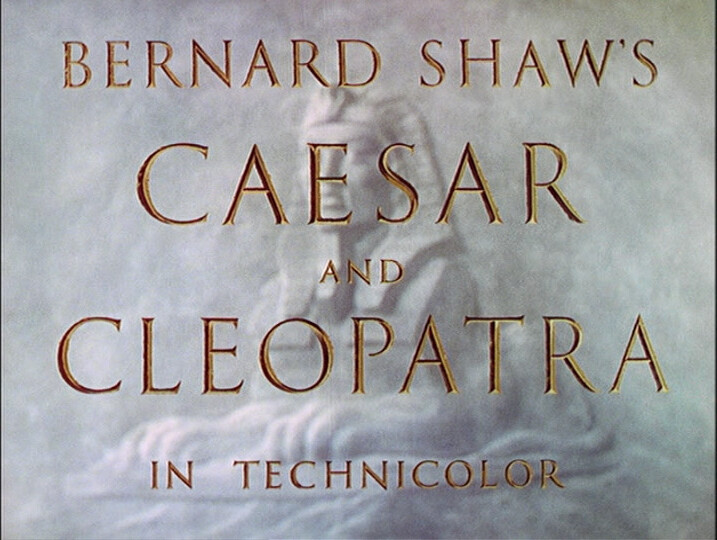 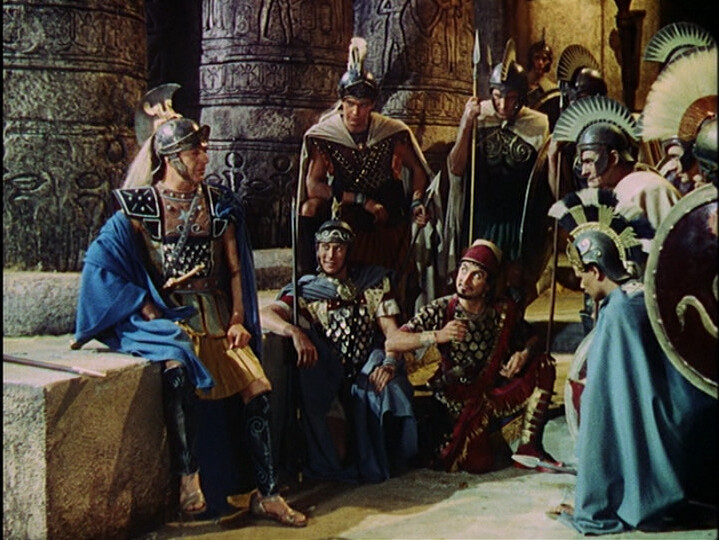 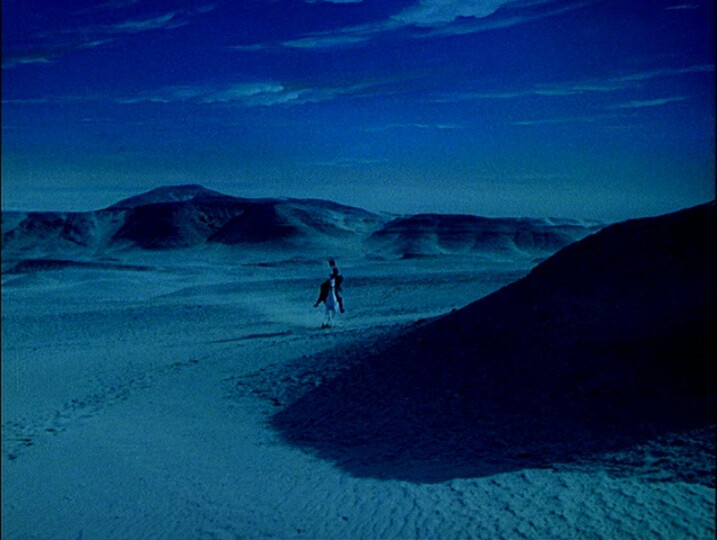 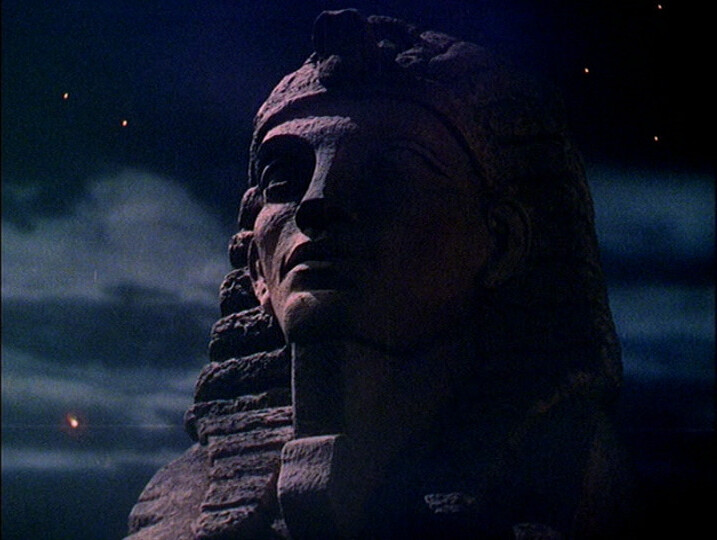 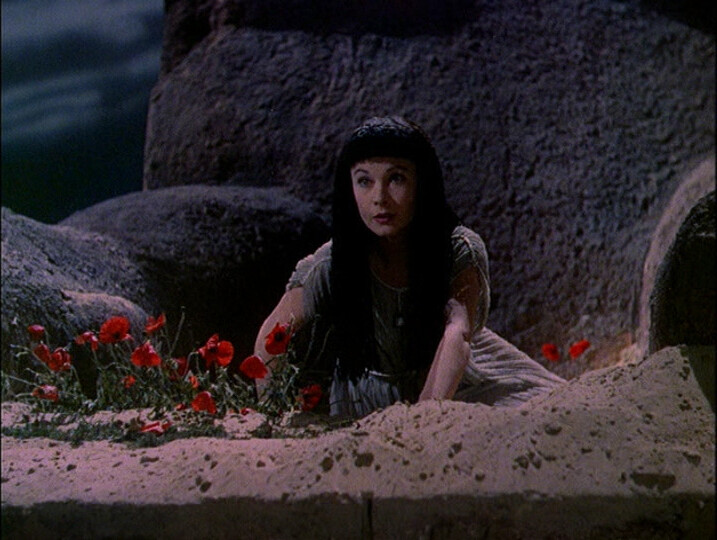 This is quite odd. I mean, it looks like a filmed stage show and a hugely expensive movie spectacle at the same time. It’s a weird thing to watch. I guess it’s all MDF and matte painting? 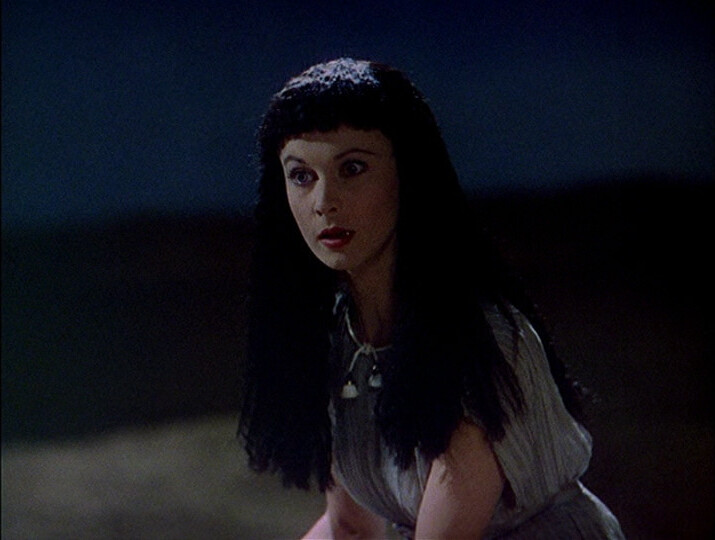 And Vivian Leigh is playing Cleopatra as a 12 year old girl (or possibly a really deranged woman; it’s hard to tell). 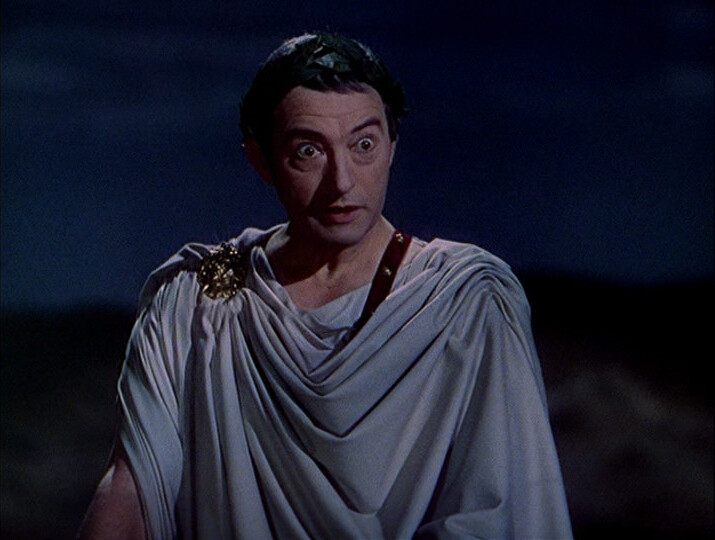 It was a box office bomb, and I guess it wasn’t all MDF:

Filmed in Technicolor with lavish sets, the production was reported to be the most expensive film ever made at the time, costing £1,278,000 (or £49.8 million at 2019 value)

But perhaps the money was spent on stupid things: 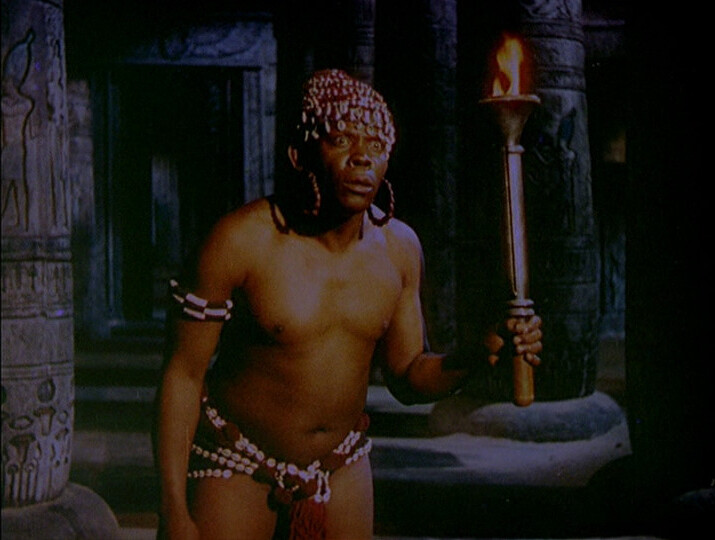 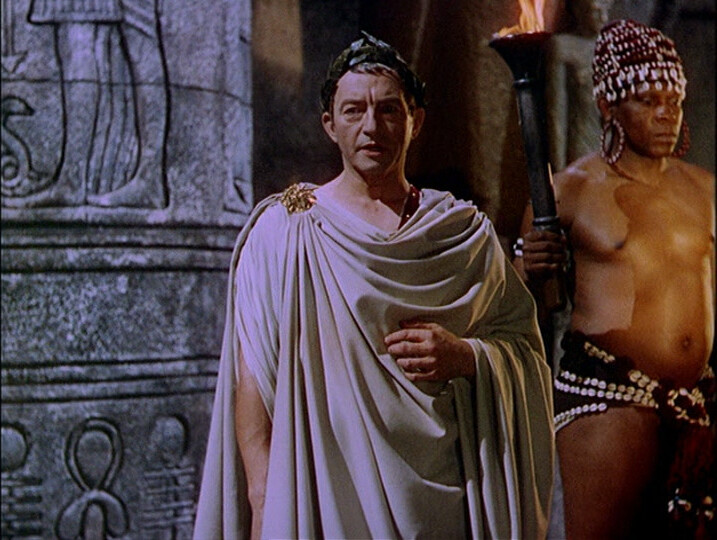 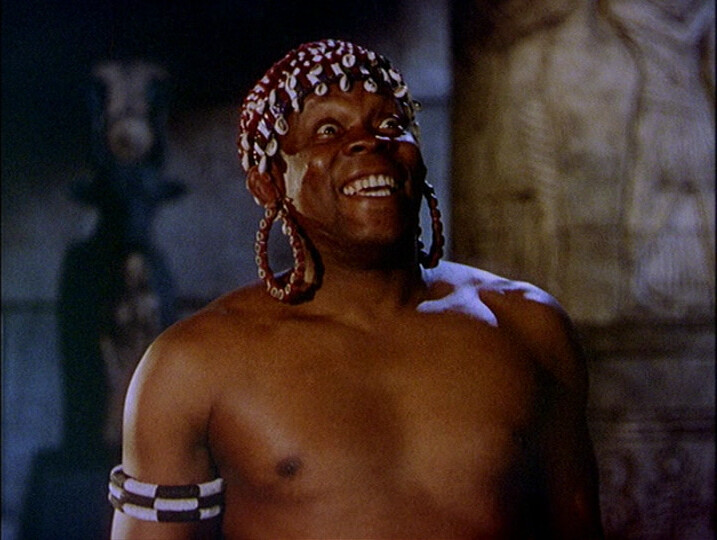 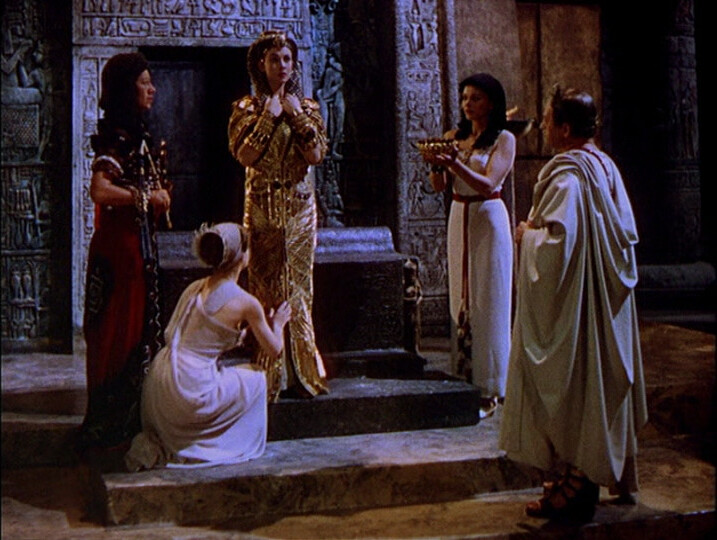 But it does look nice. This DVD version hasn’t been noticeably restored, but it still looks great. I mean, it totally looks like a stage set, but it’s a very good looking stage set. 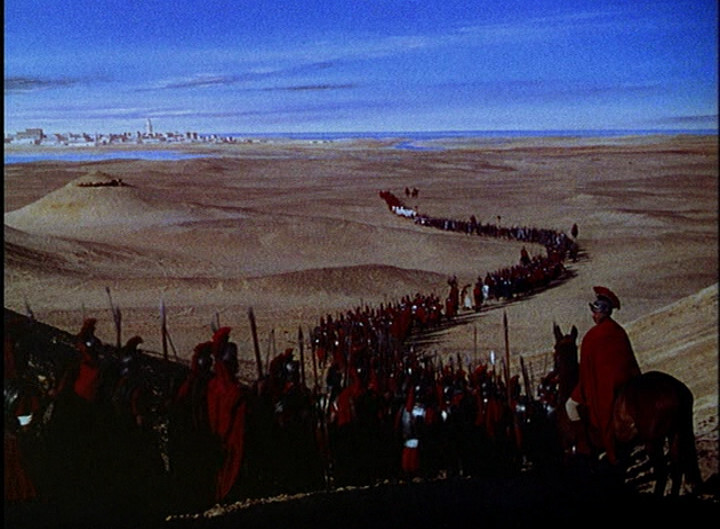 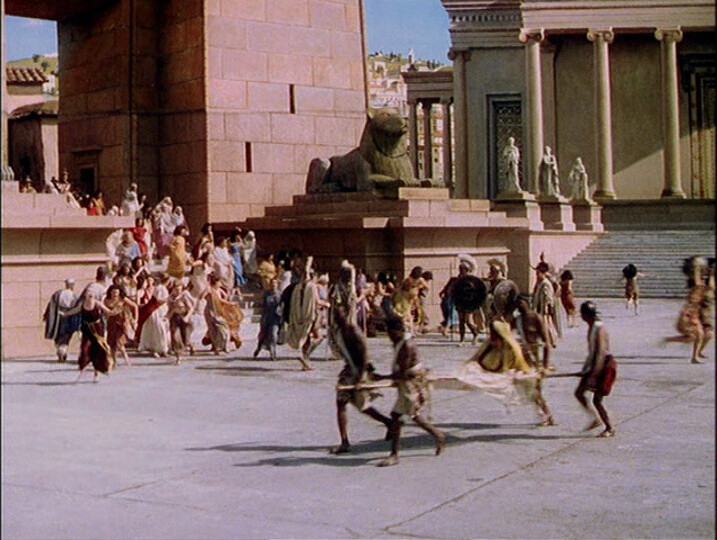 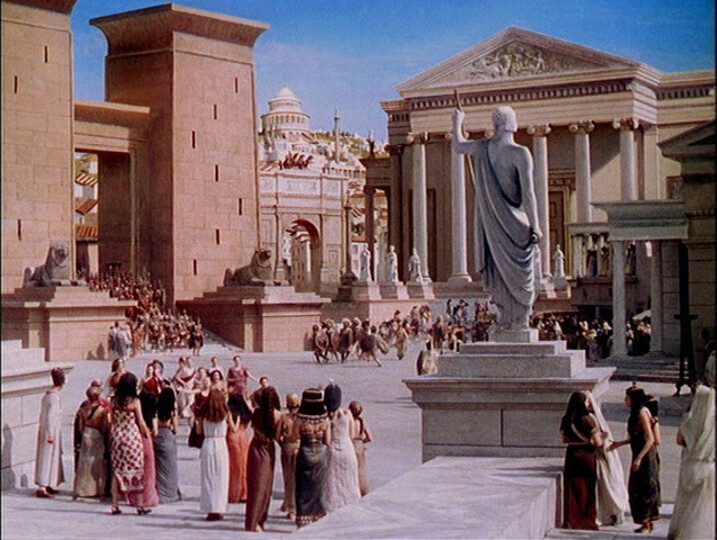 OK, this looks properly impressive. So much carpentry, so much matte painting. 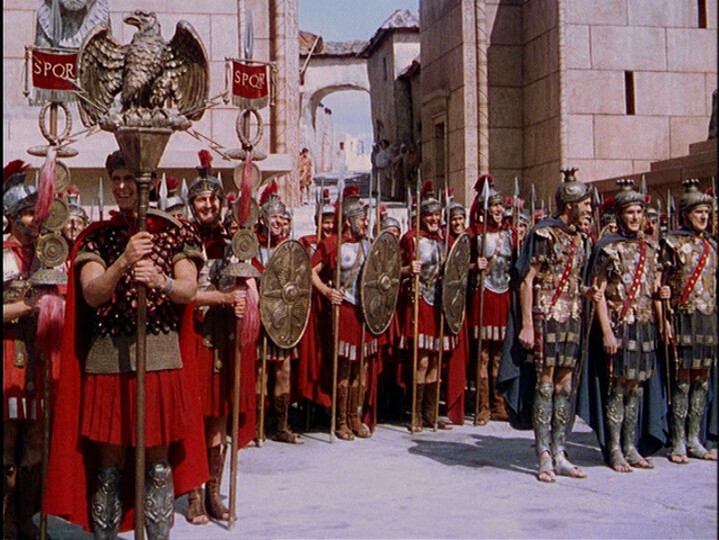 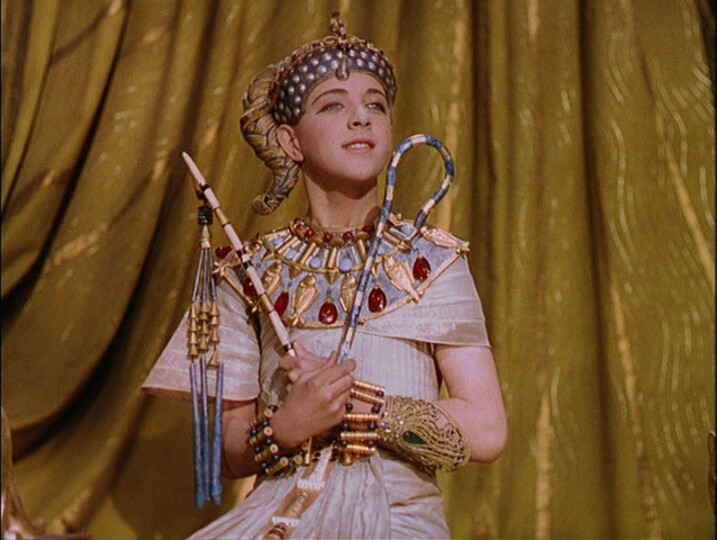 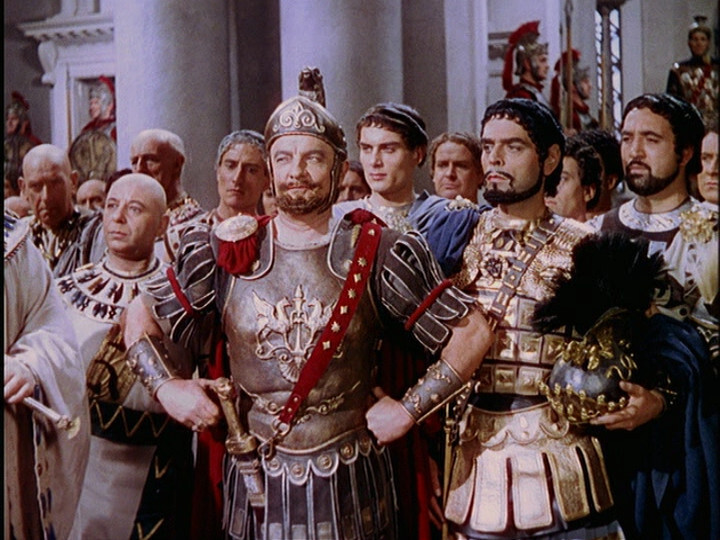 All the Egyptians are all gay coded, I guess( except the women), and need the virile Romans to rule them.

I can’t imagine why this was such a box office bomb in 1945. 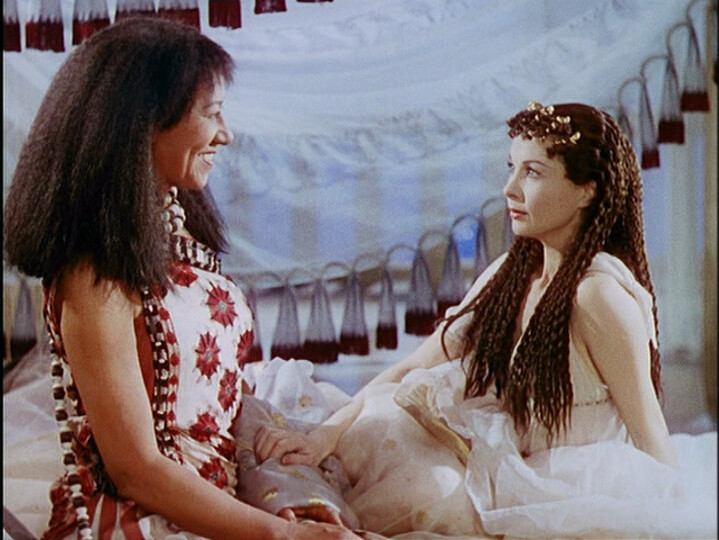 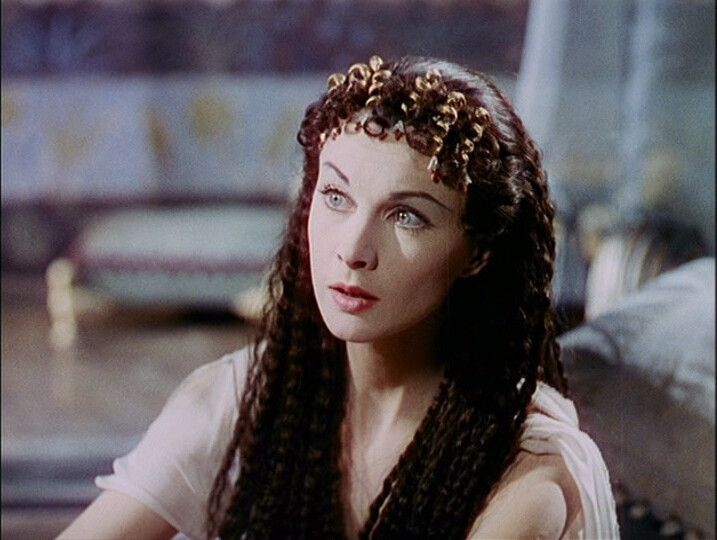 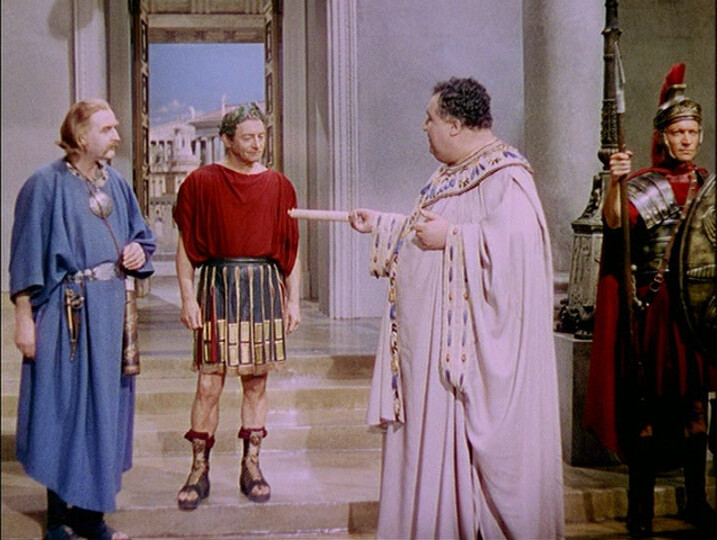 There’s fortunately a lot of stairs in the set so that Caesar doesn’t look shorter than everybody else all the time. Just most of the time. 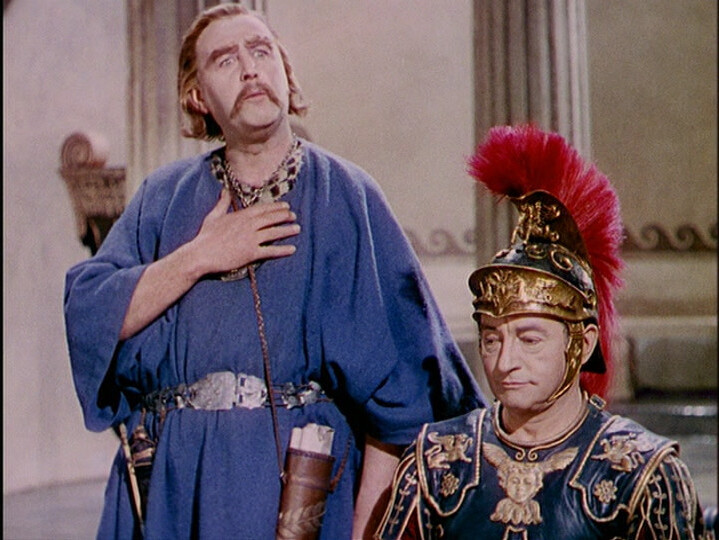 The transfer could have done with some sprucing up. Everything seems overexposed, and I’m guessing that it didn’t look like this originally, because the film is otherwise technically really quite accomplished.

This is an insightful review:

He can be stronger on philosophy and political theory than on action or dramatic tension, and even though his contributions to political and philosophical debates are often expressed in witty and vivid dialogue, the reader (and to an even greater extent the theatre-goer) is sometimes left with the impression that Shaw’s linguistic gifts might have been better employed in penning political tracts than in writing for the stage.

Some films which were “stinkers” when they first came out have gone on to become classics, but “Caesar and Cleopatra” seems to have gone in the opposite direction; today it is a little-known, rarely-seen curiosity. 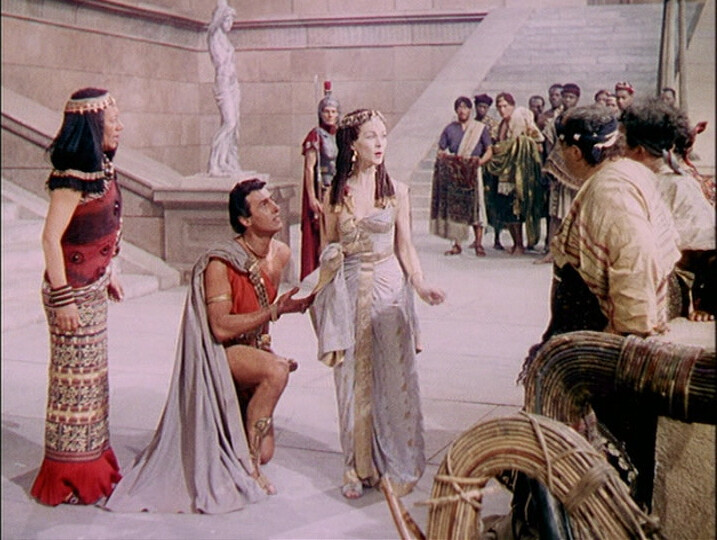 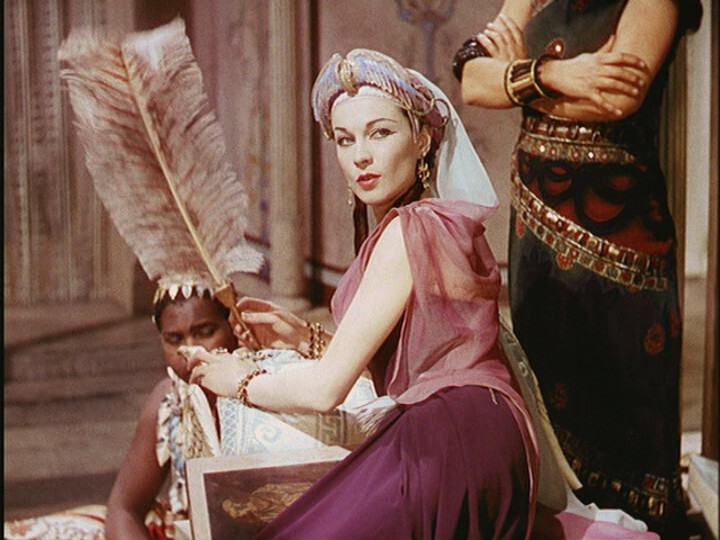 I’m quite enjoying this. It’s like a classier version of a BBC TV series from the 70s — everything looks fake, but like on purpose?

It’s no I, Claudius, though.

But I totally, totally see why this was a box office bomb. It’s not really er “good”, and I sympathise with the cinema audience in 1945 who were probably throwing their rationed popcorn at the cinema screen while this was being shown. Because it’s… It’s… 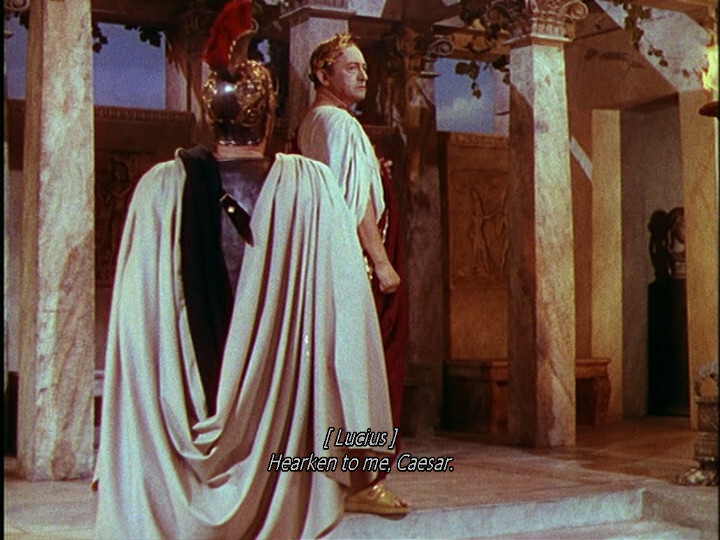 Shaw is doing a fan fiction Shakespeare thing, but he’s no Shakespeare. Hearken to my ass. It’s pretty close to be a parody, but without any of the jokes. 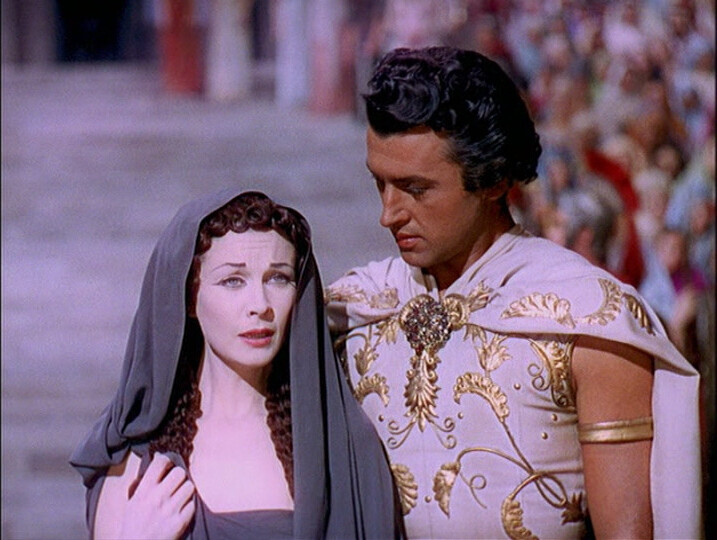 Wow, they really powdered Leigh up…

The Smiths - The Queen Is Dead 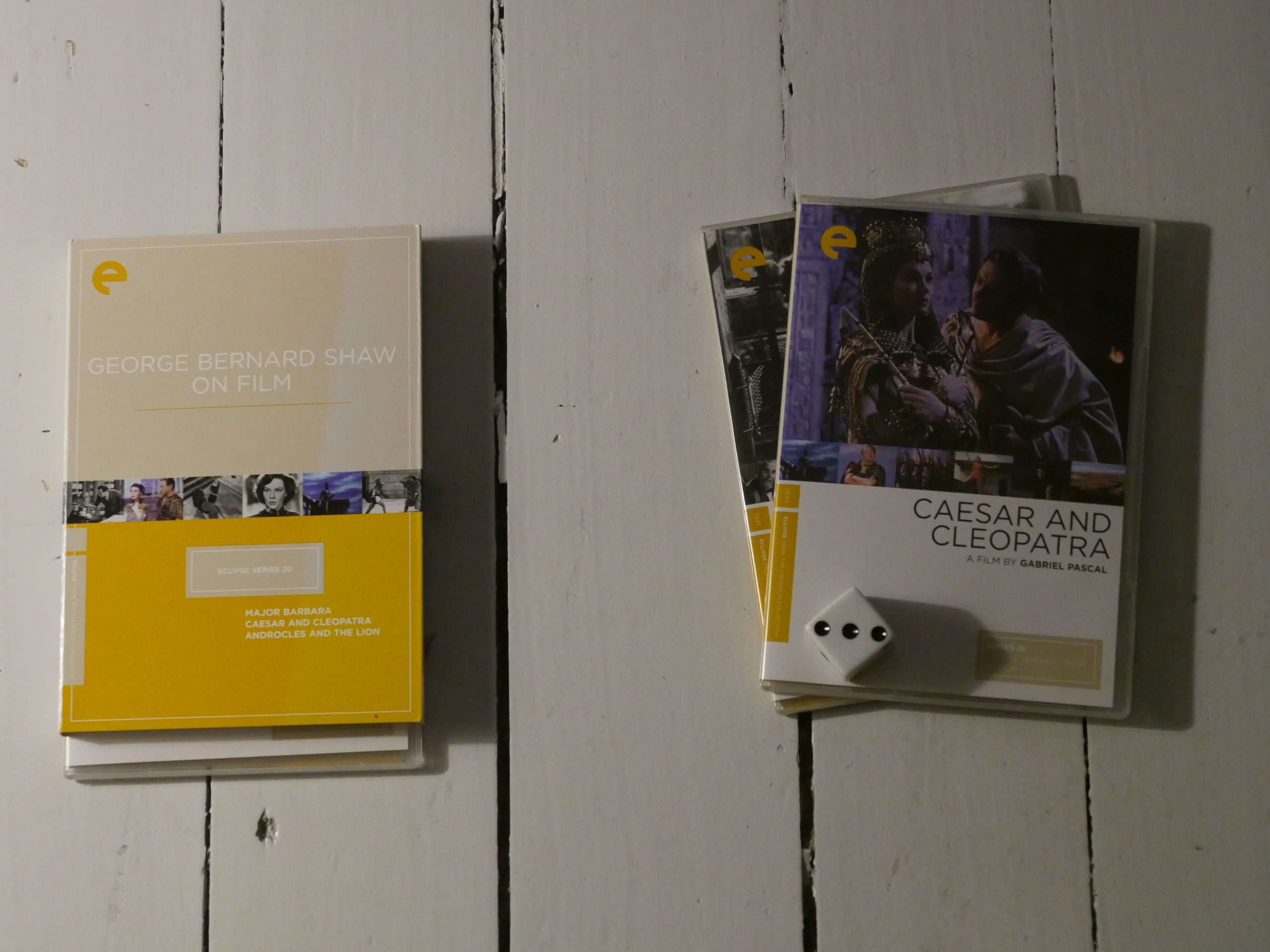