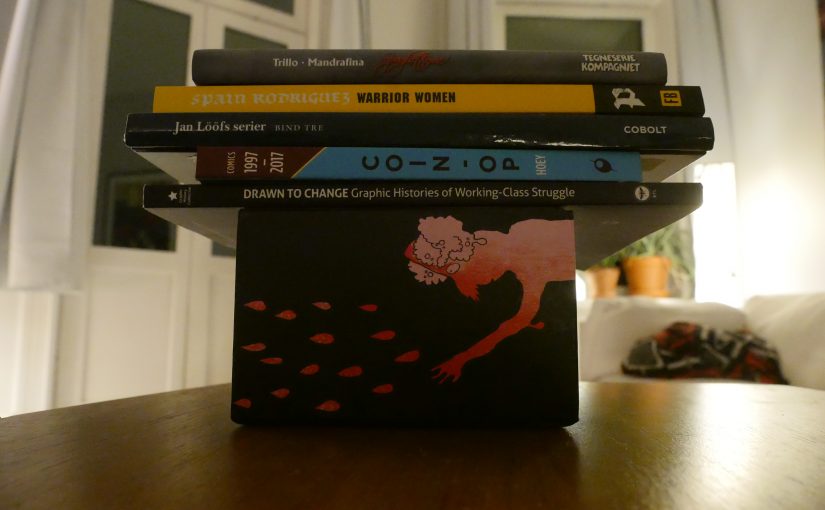 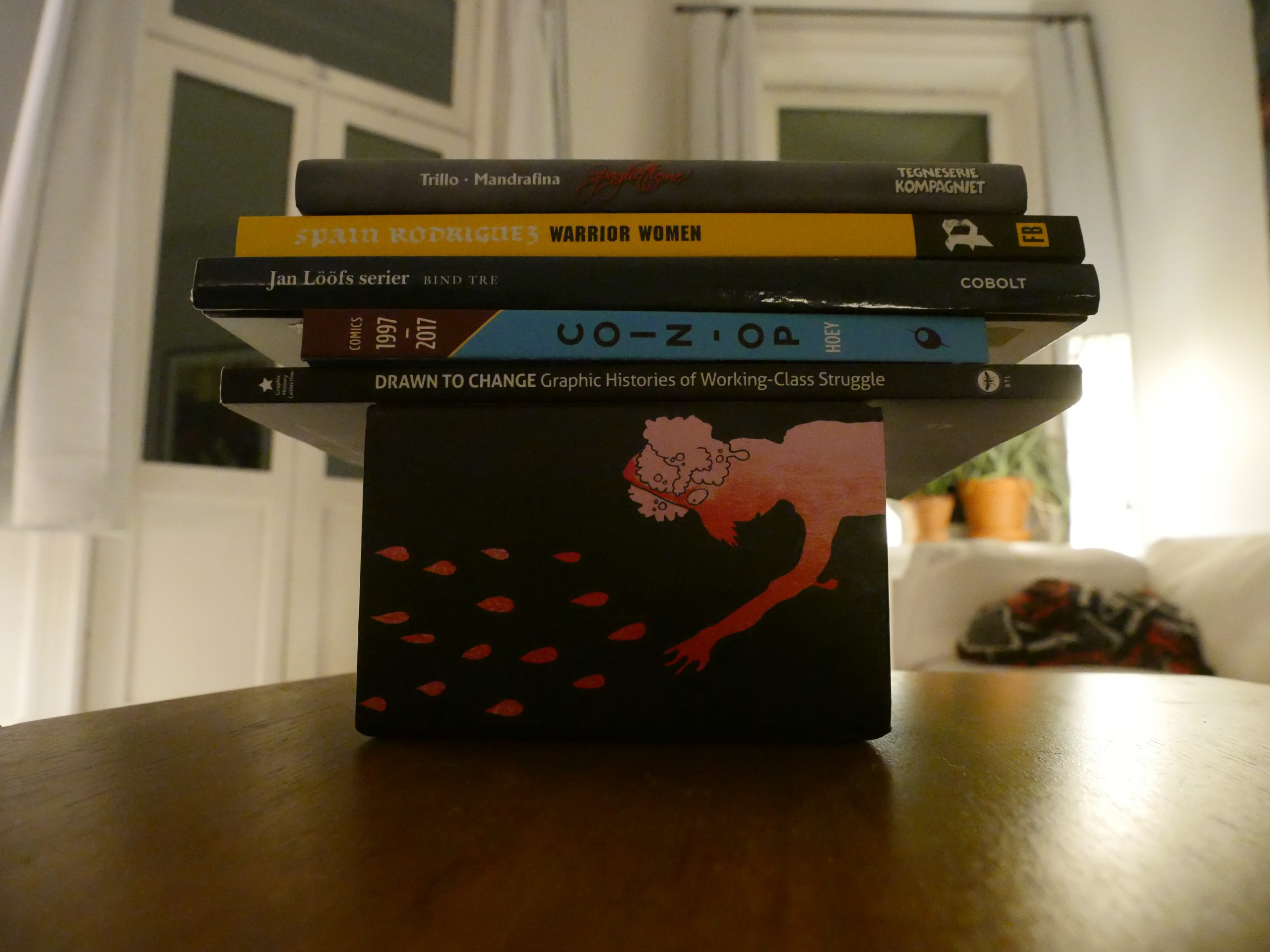 It’s a rainy night, so I think I’ll ditch my plans to start training for the ultra marathon tonight and instead read some comics. 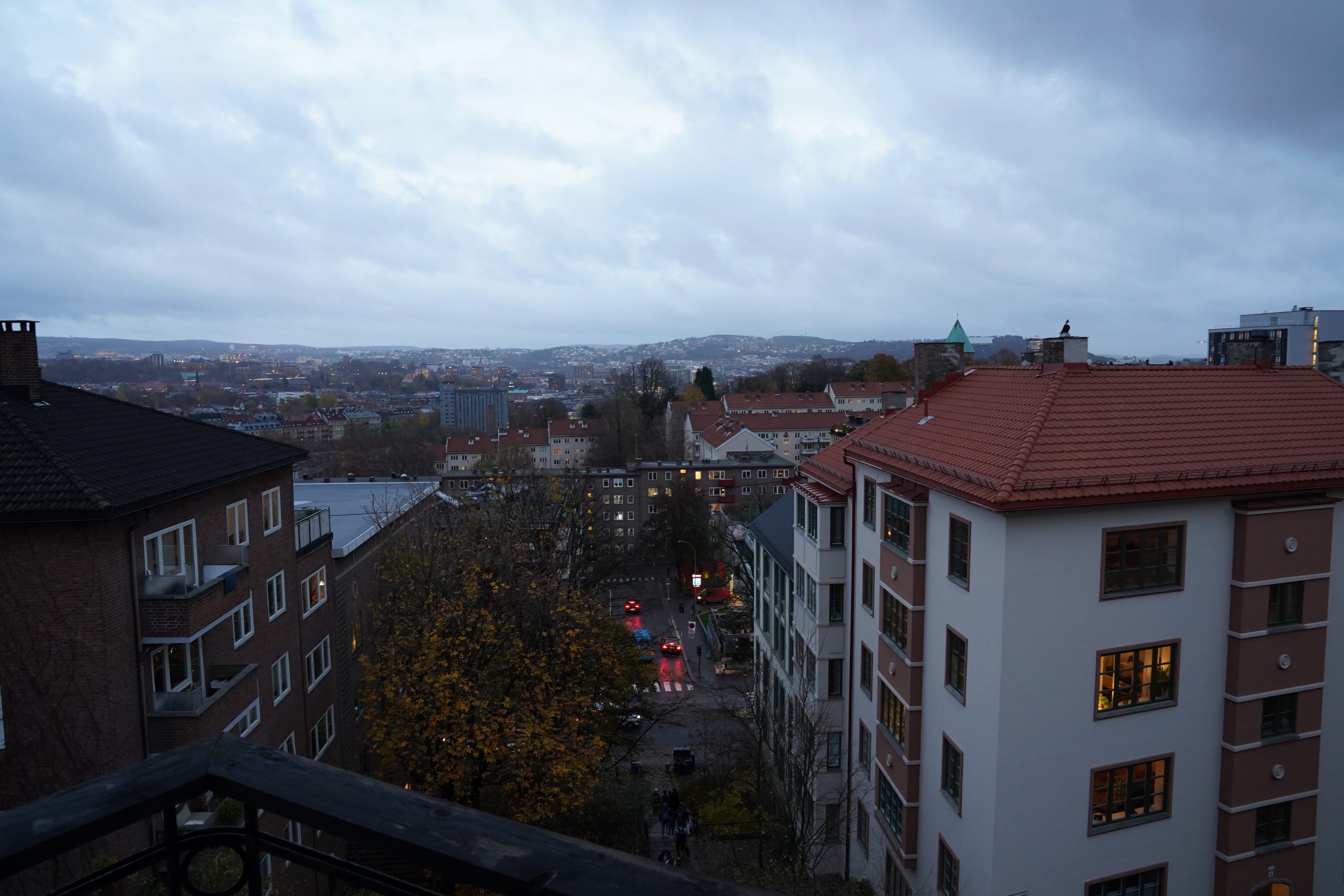 But with a twist: This time I’m only going to read comics that I’ve had for a long time but have avoided reading. 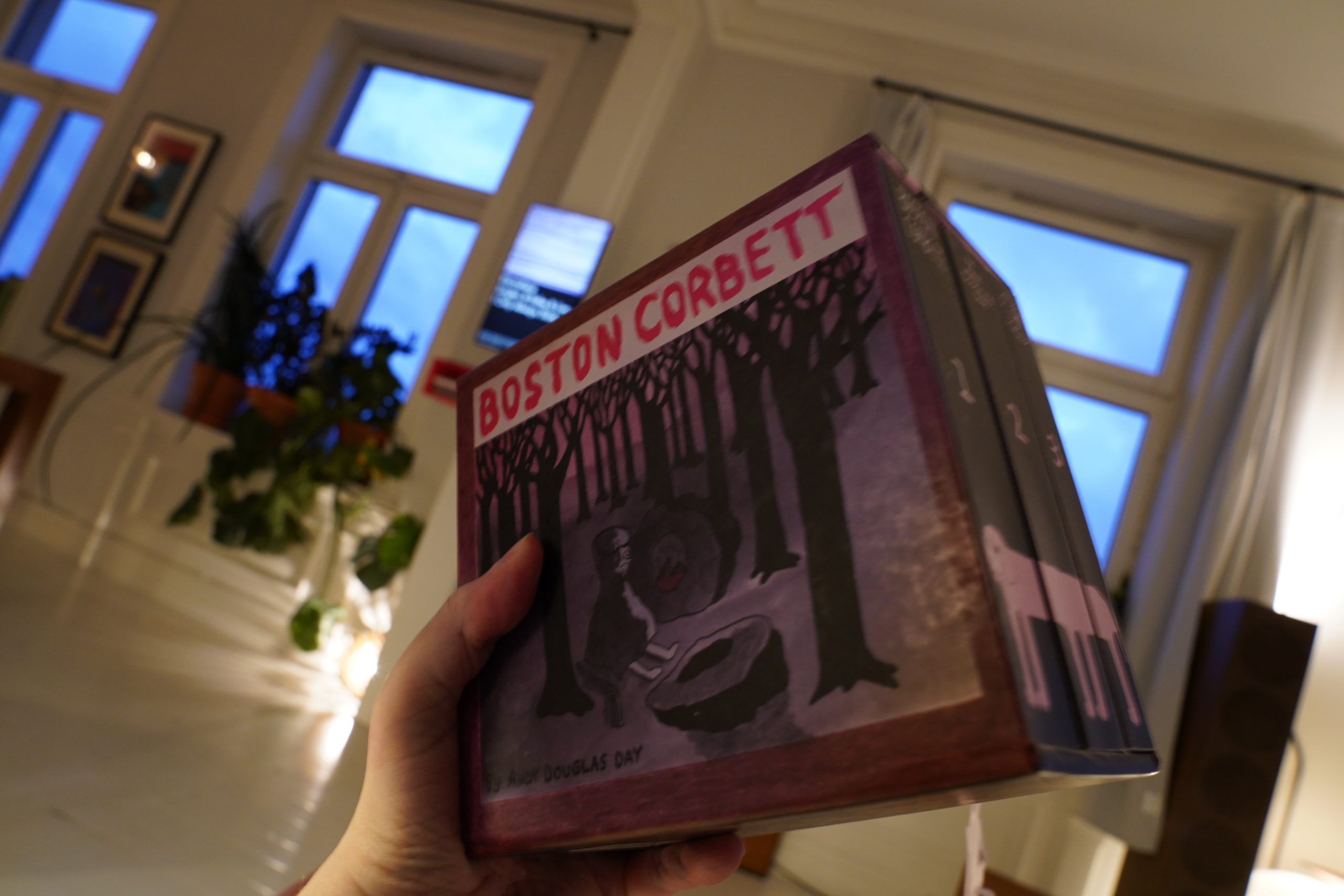 The reason I haven’t read this is, of course, that it’s… long. Perhaps I won’t have time to do anything but read this all night long? 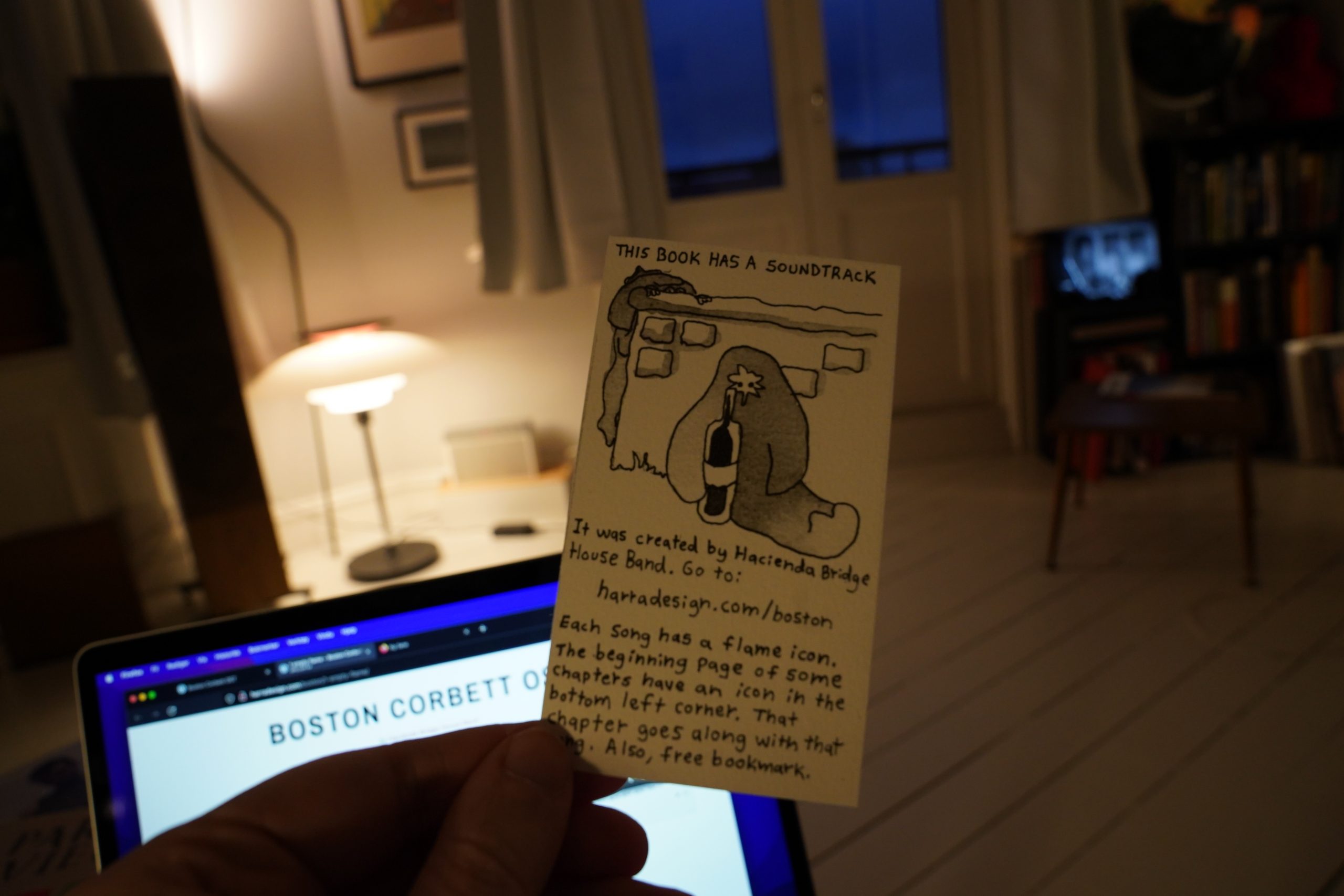 Oh, it comes with a soundtrack? And there’s supposed to be glyphs that show me what song to play? 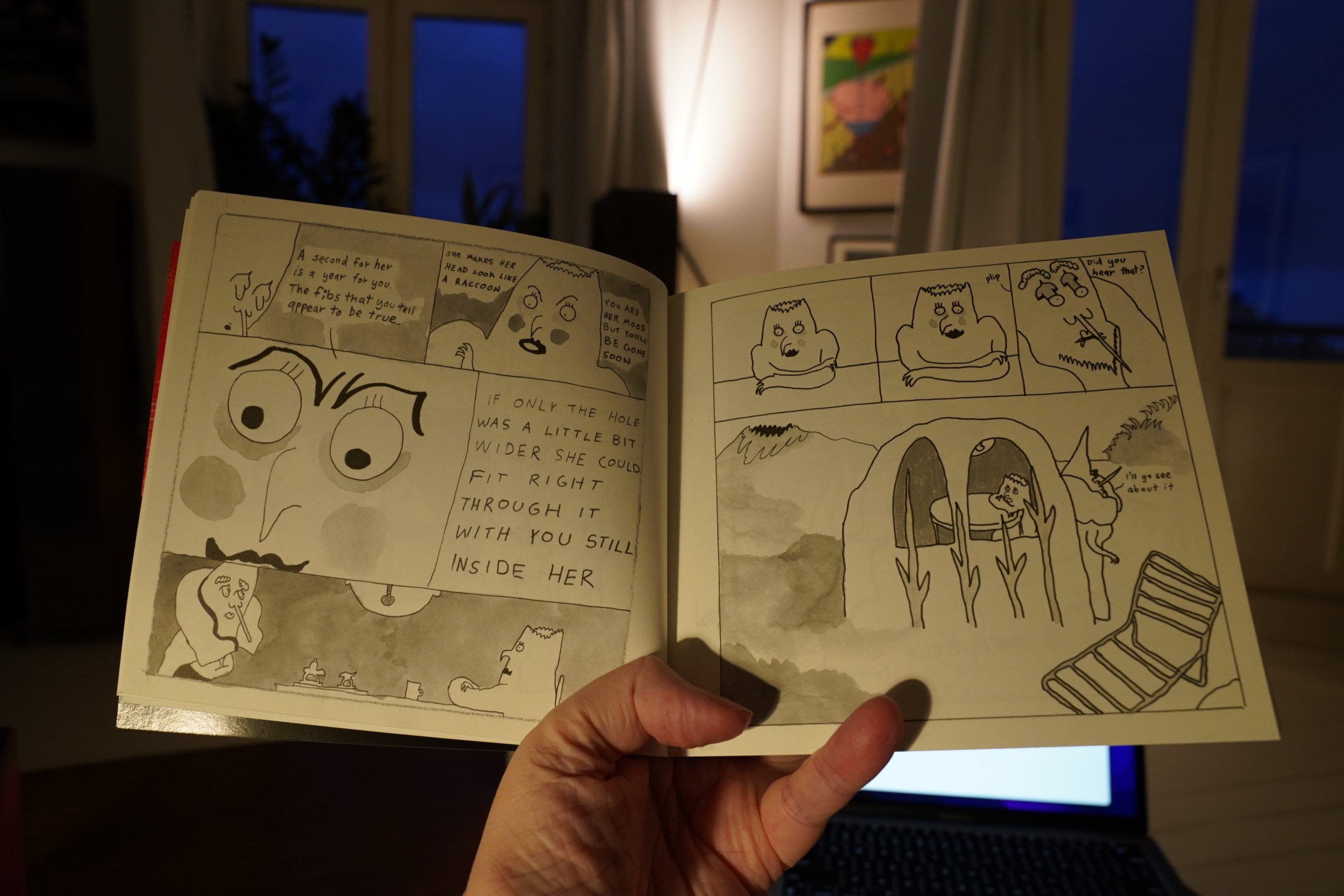 And… I don’t see any of those? Did he forget to draw them in? IT”S DRIVING ME CRAZY WHEN DO I START THE MUSIC 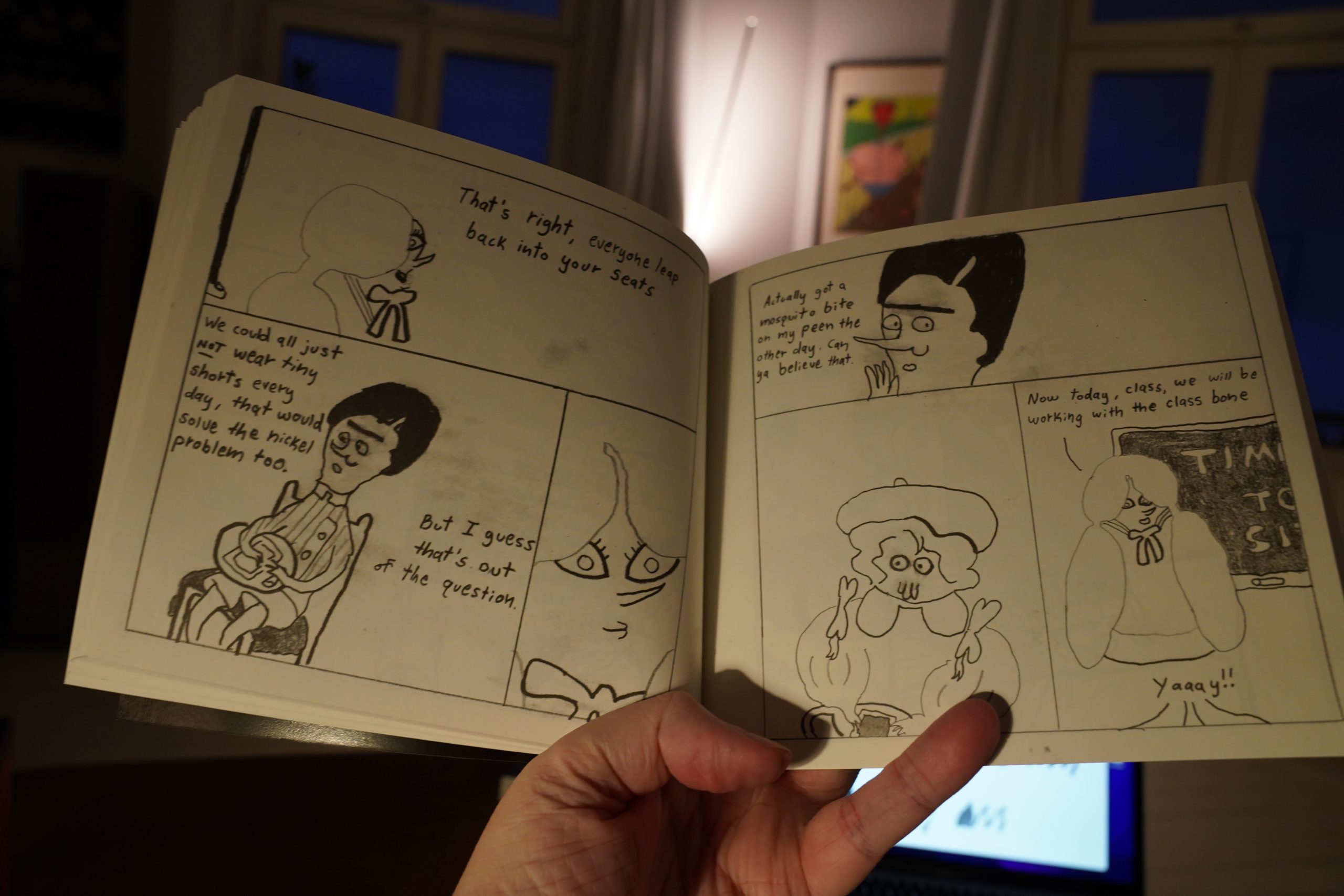 That was all I could obsess about for the first part of the book, so I probably missed a lot, and eventually just started the music at random. 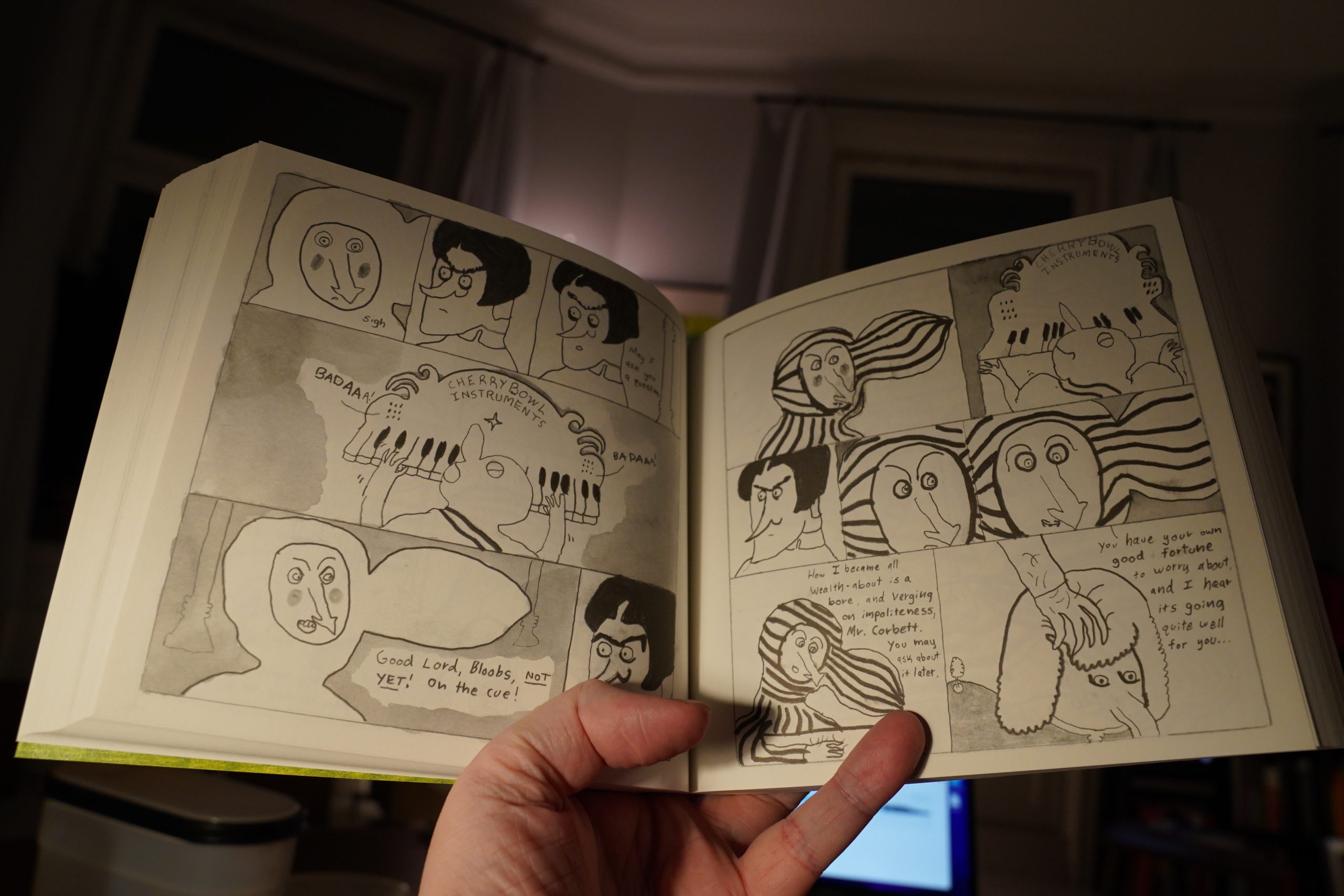 It’s an interesting read. It feels like there’s a lot of private signifiers everywhere, or perhaps cultural signifiers that I’m not really aware of. Is this all about doing drugs and watching Adventure Time? 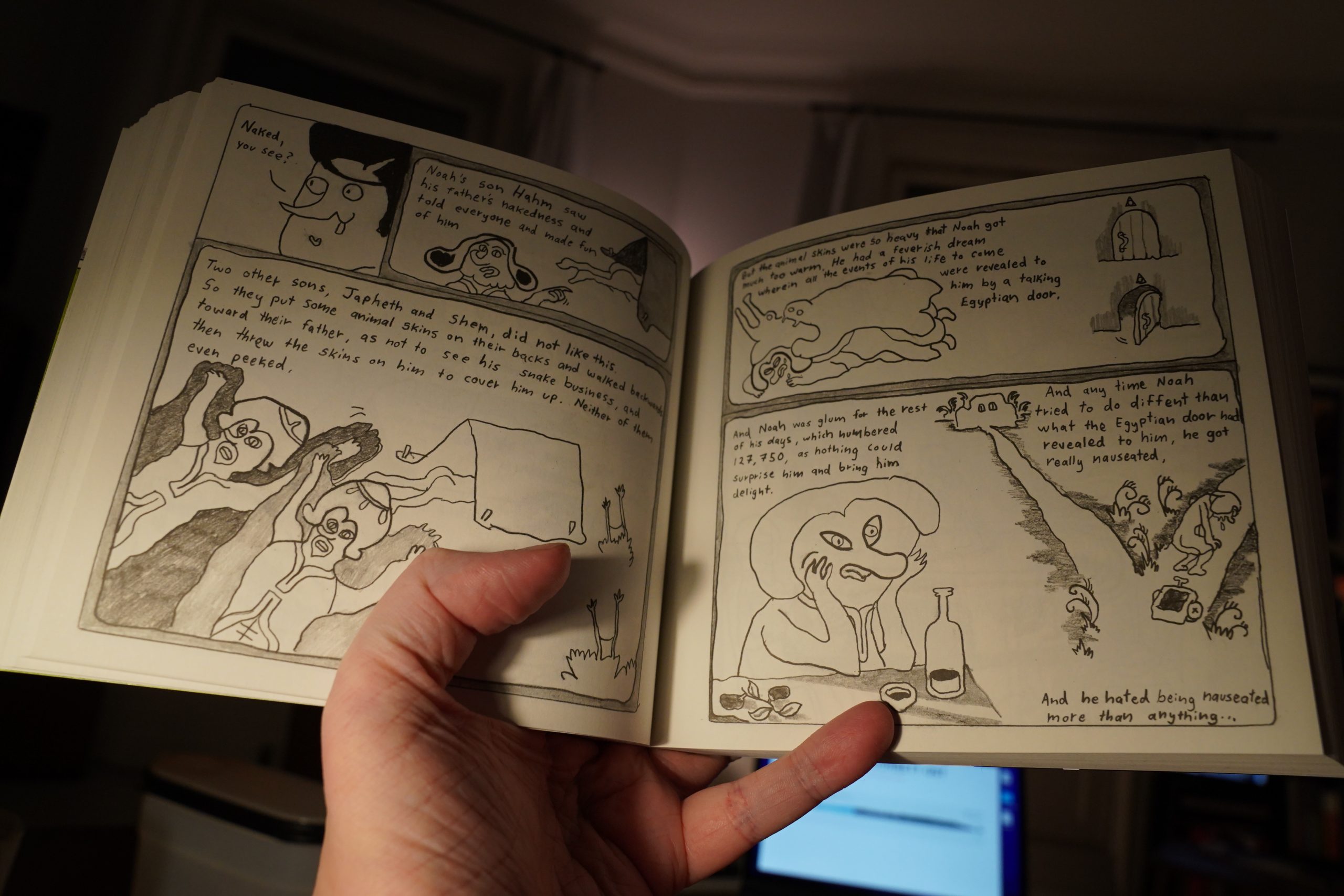 But I mean, it’s good… things connect in weirdly satisfying ways, and there’s a bunch of jokes that are really funny. 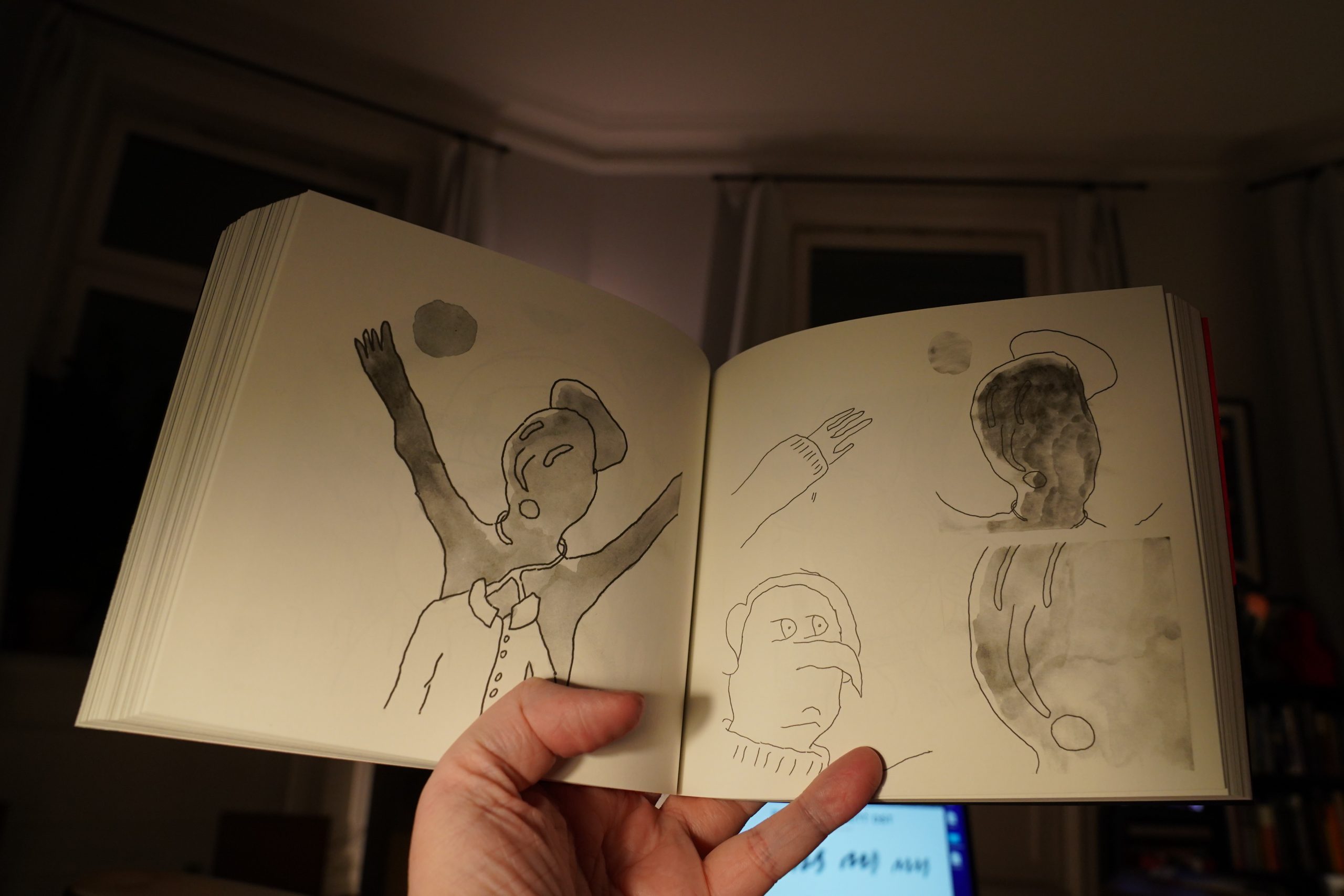 But I have no idea what relevance the third book has to the first two. The first two tell a pretty straightforward narrative about Boston Corbett (and some other characters), but then the last bit is… much more druggy? And not about that at all?

The real Thomas “Boston” Corbett — a hatter by trade given to religious zealotry so all-consuming that he castrated himself with a pair of scissors to relive himself of sexual temptation, and who insisted, to no small acclaim, that God had directed his action in the killing of Booth

I had no idea that it was about somebody that actually existed. I guess that’s one of those “cultural signifiers” I was babbling about. 18:55: Drawn to Change: Graphic Histories of Working Class Struggle edited by Paul Buhle and others (Between the Lines) 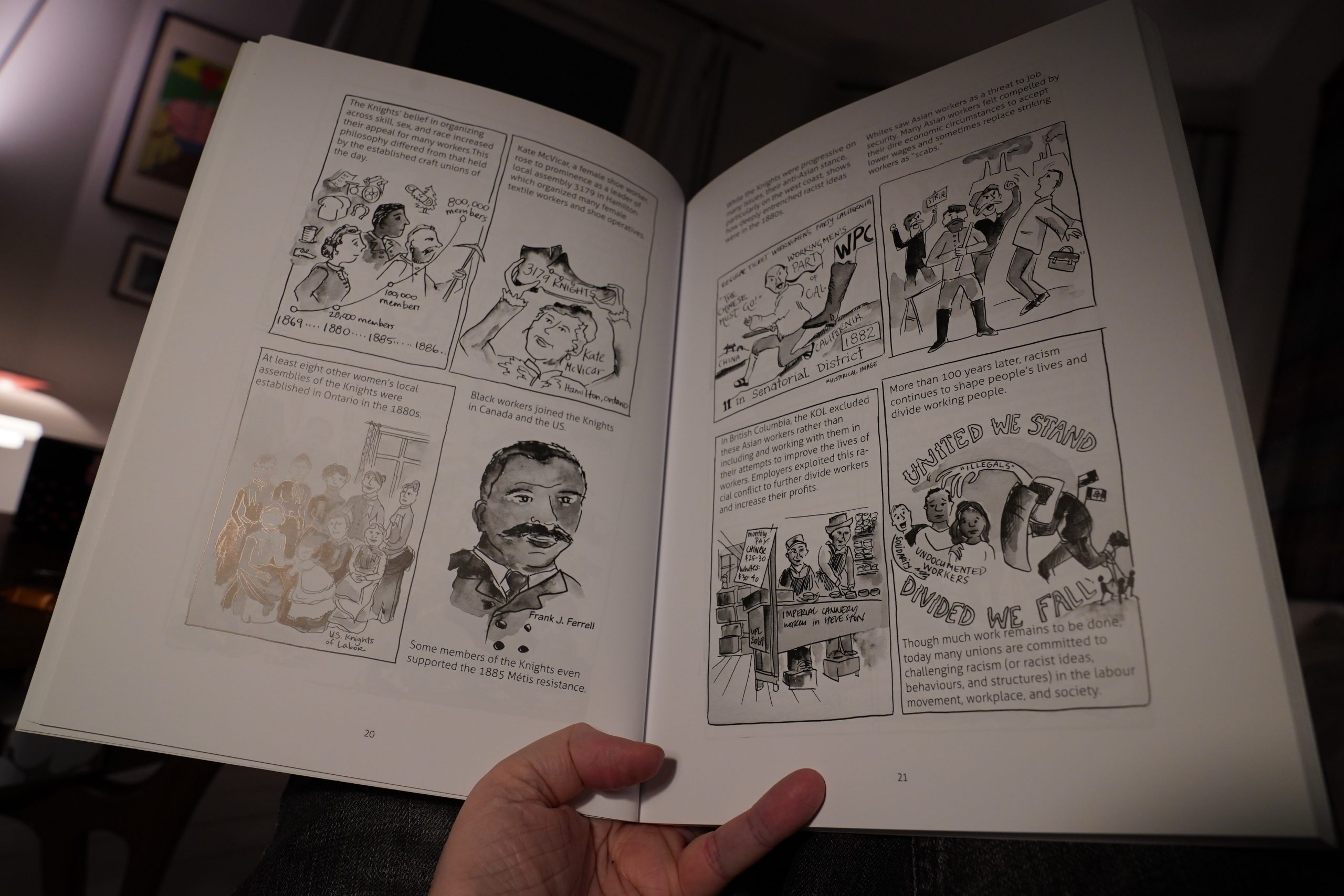 As expected, some of these comics are hard sledding. They’re barely comics at all — mostly just lists of facts about Canadian unions, and I have to admit that I started skipping during these bits. 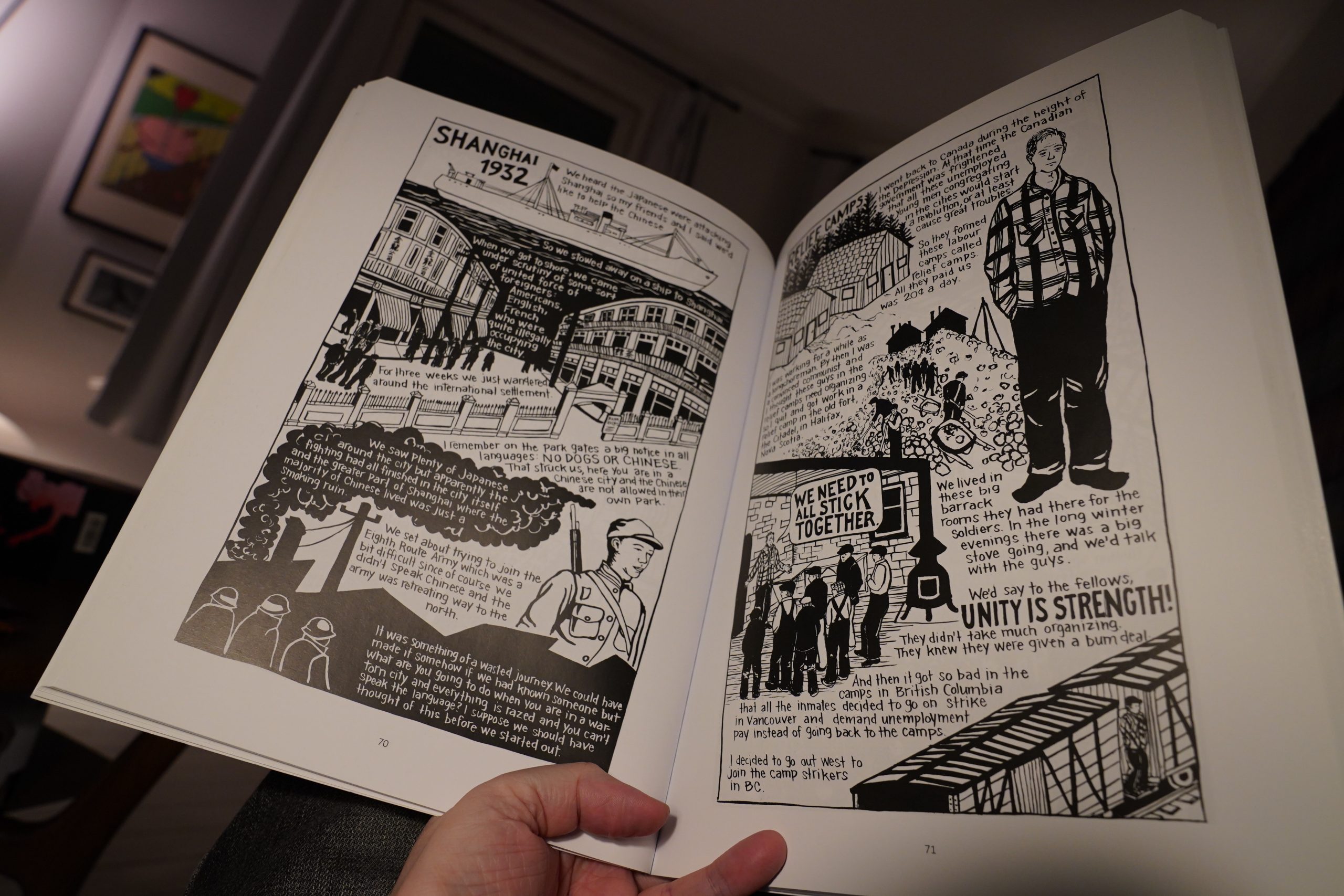 But there’s one that’s really good — this one by Kara Sievewright. It’s enagingly told and is really interesting. I had no idea that people were going to China in 1932 to try to help defend against the Chinese. (He later went to Spain to help fight against the fascists there, too, but that’s more traditional.) 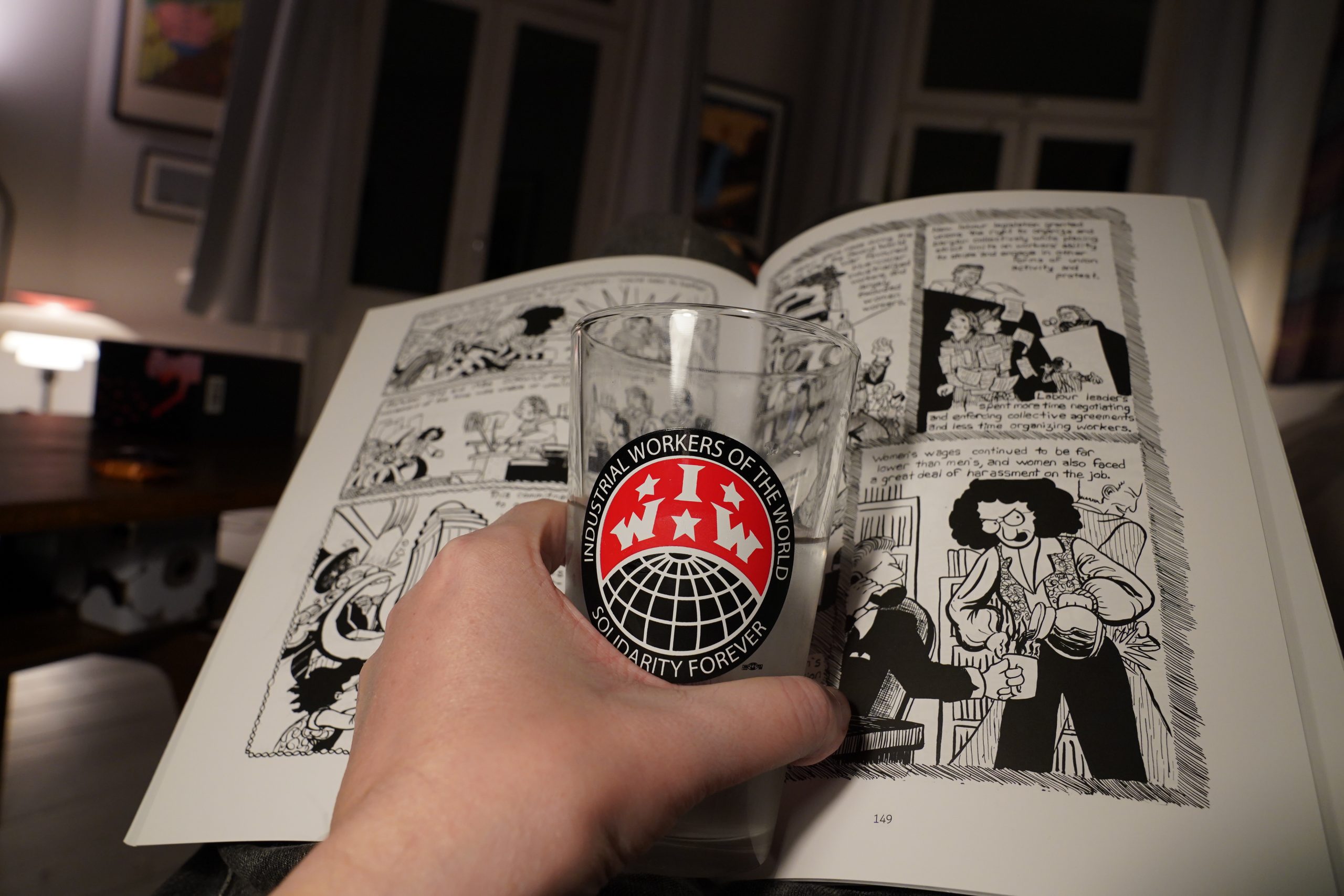 After all that reading, I need a refreshing drink of water. 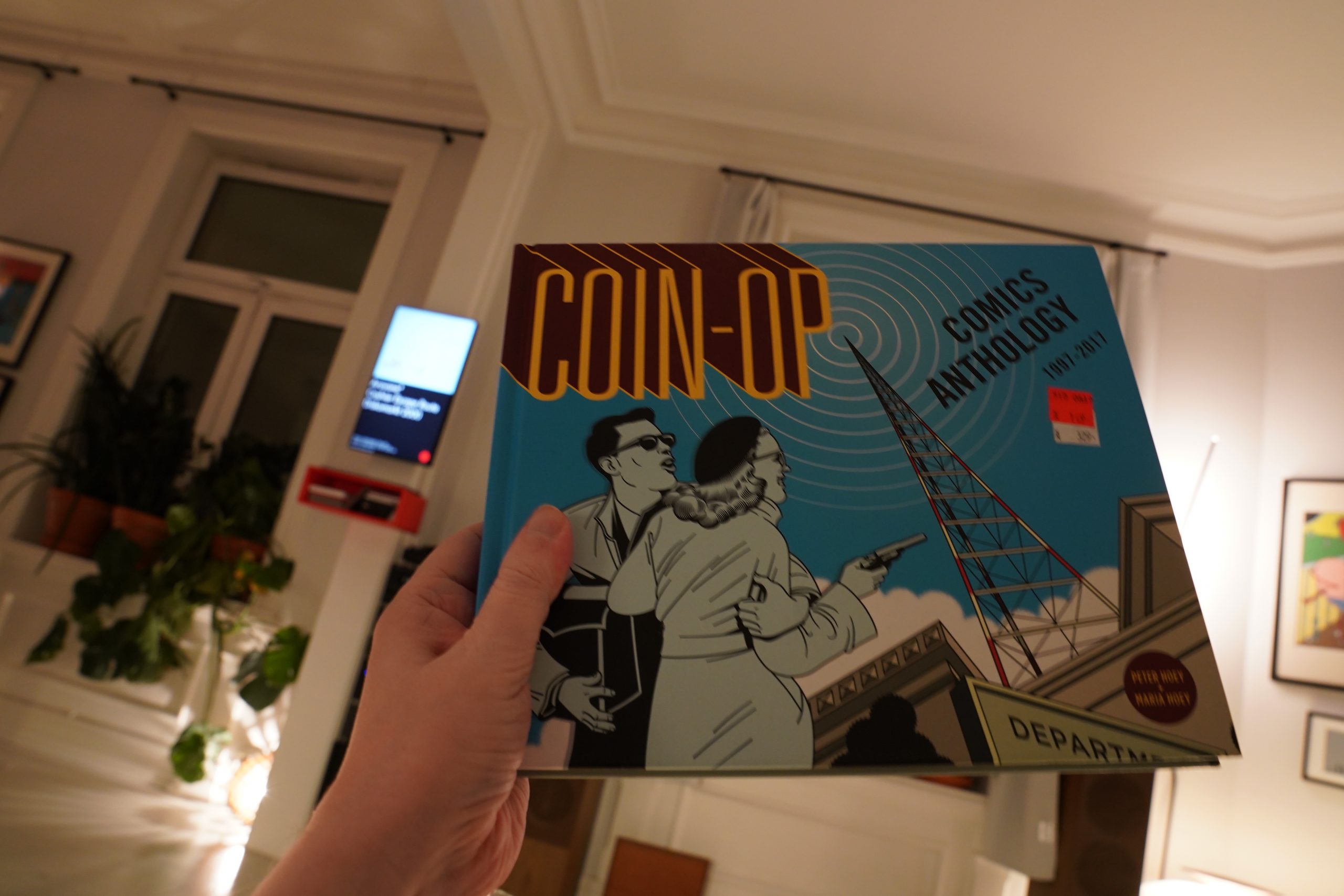 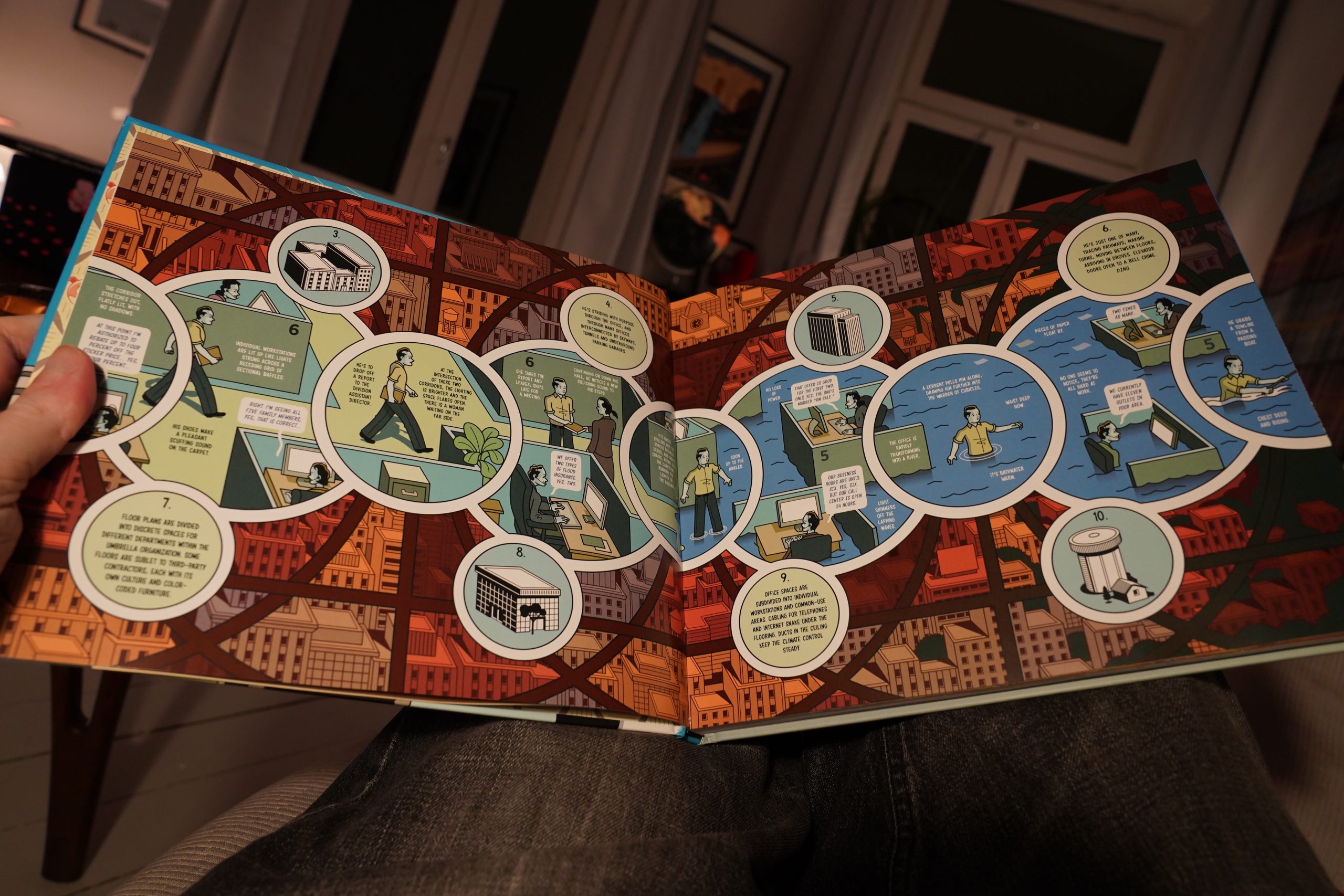 OK, this is just me — I really, really dislike this sort of computer-assisted artwork. I have zero, no negative interest in art that looks like this. It’s just me! 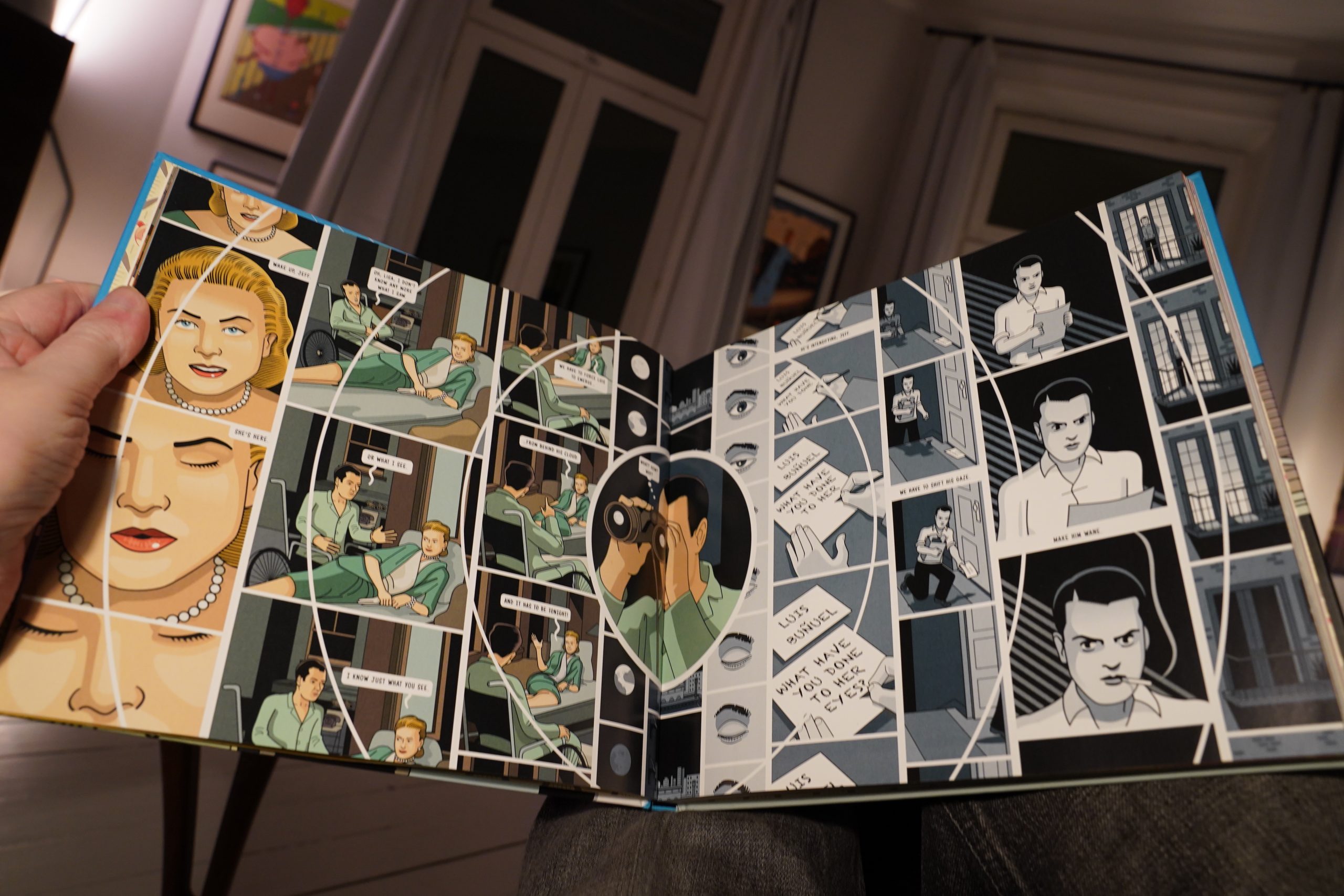 But this is pretty interesting. Even if every separate panel is offputting, the post-Ware/Colombia storytelling is pretty much on point. It’s very pomo what with all the simultaneous voices going on and the many references to… well, OK, the references are mostly to old movies. 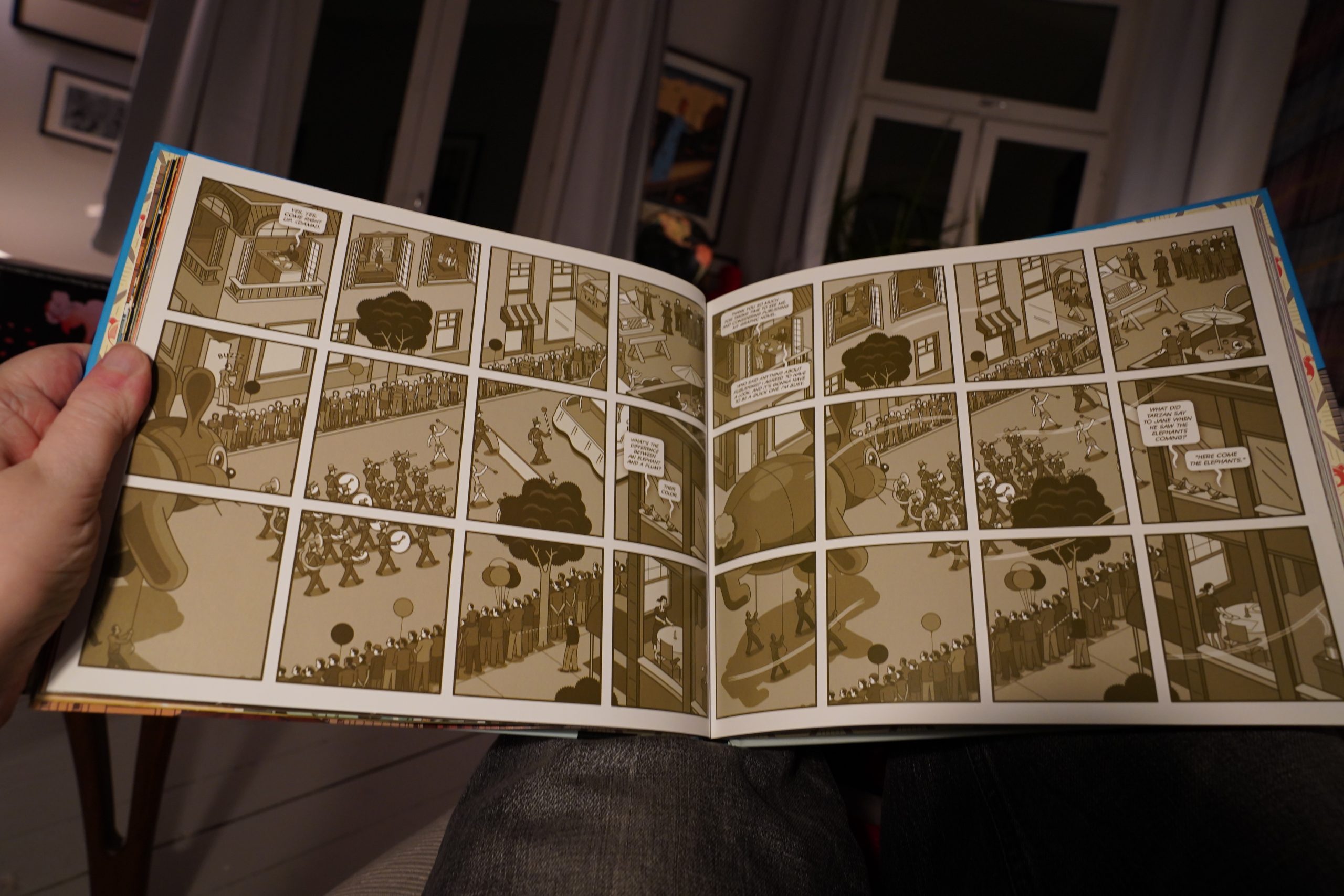 These pieces are so close to being brilliant — for instance this thing where each panel tells a separate story, and then many of them intersect. It’s fun. But they feel more like excersises in storytelling than anything else? There’s, like, no emotional impact. Or if there is, I’m not interested enough to invest the take the time to root out what that might be. 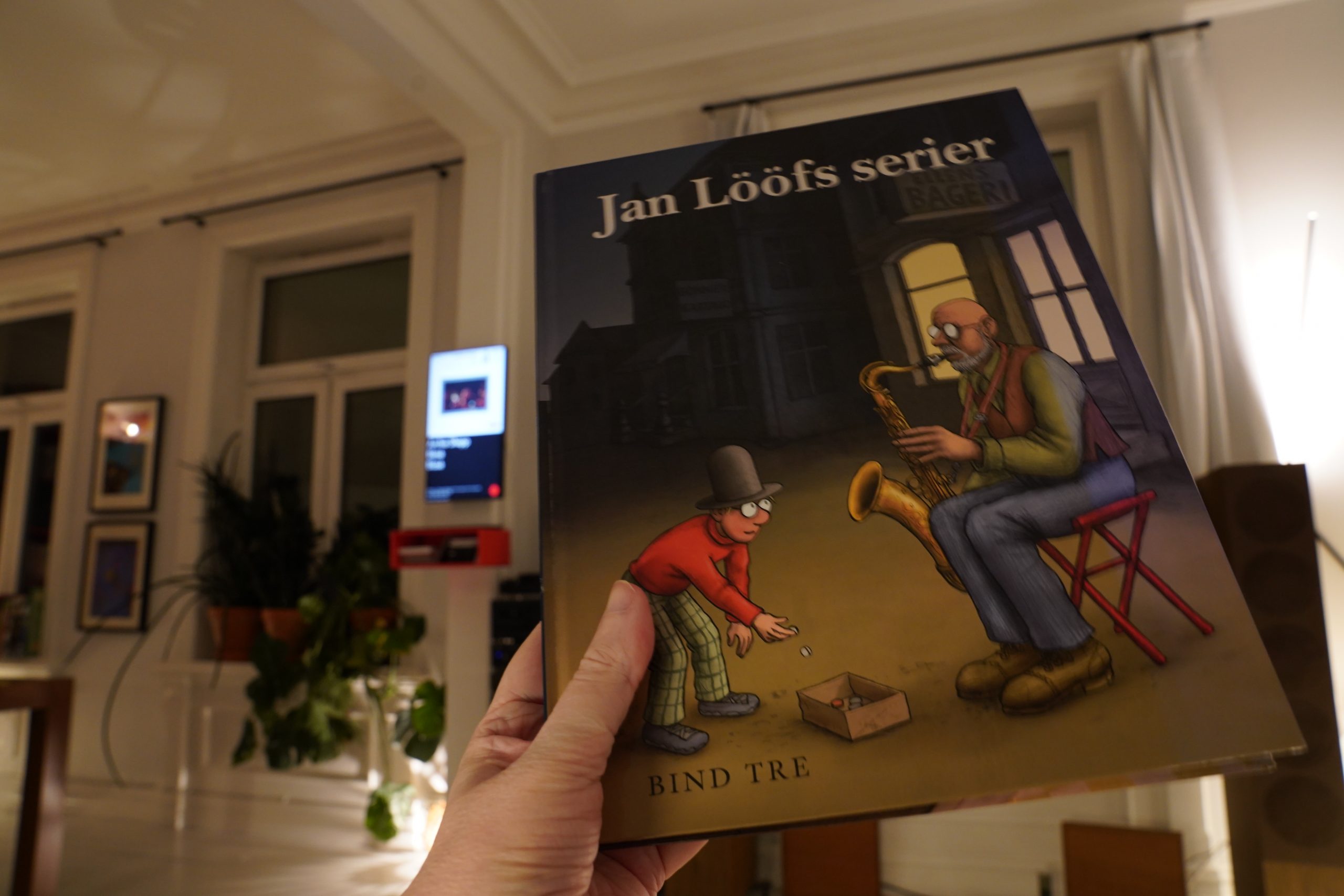 Huh. This is a Swedish book translated to Danish? How odd. 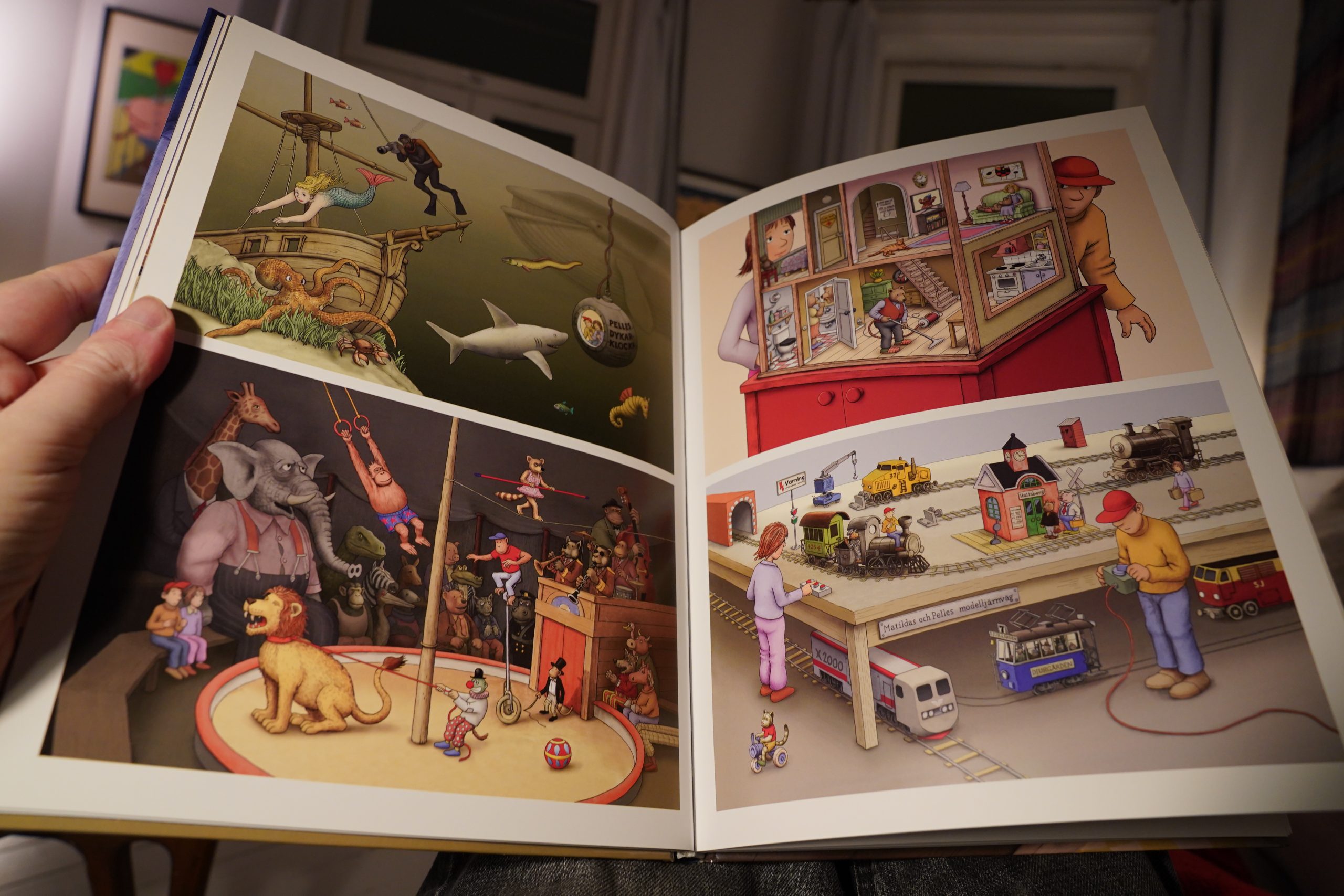 Lööf is somebody who I’ve been vaguely aware of — he’s been doing comics (in Sweden) for many decades, but has never really been translated much? And I’ve somehow managed to avoid picking up his stuff in Swedish?

In any case, this looks like a massive career retrospective kind of book — we get a 60 page illustrated introduction, reprinting many, many illustrations he’s done… 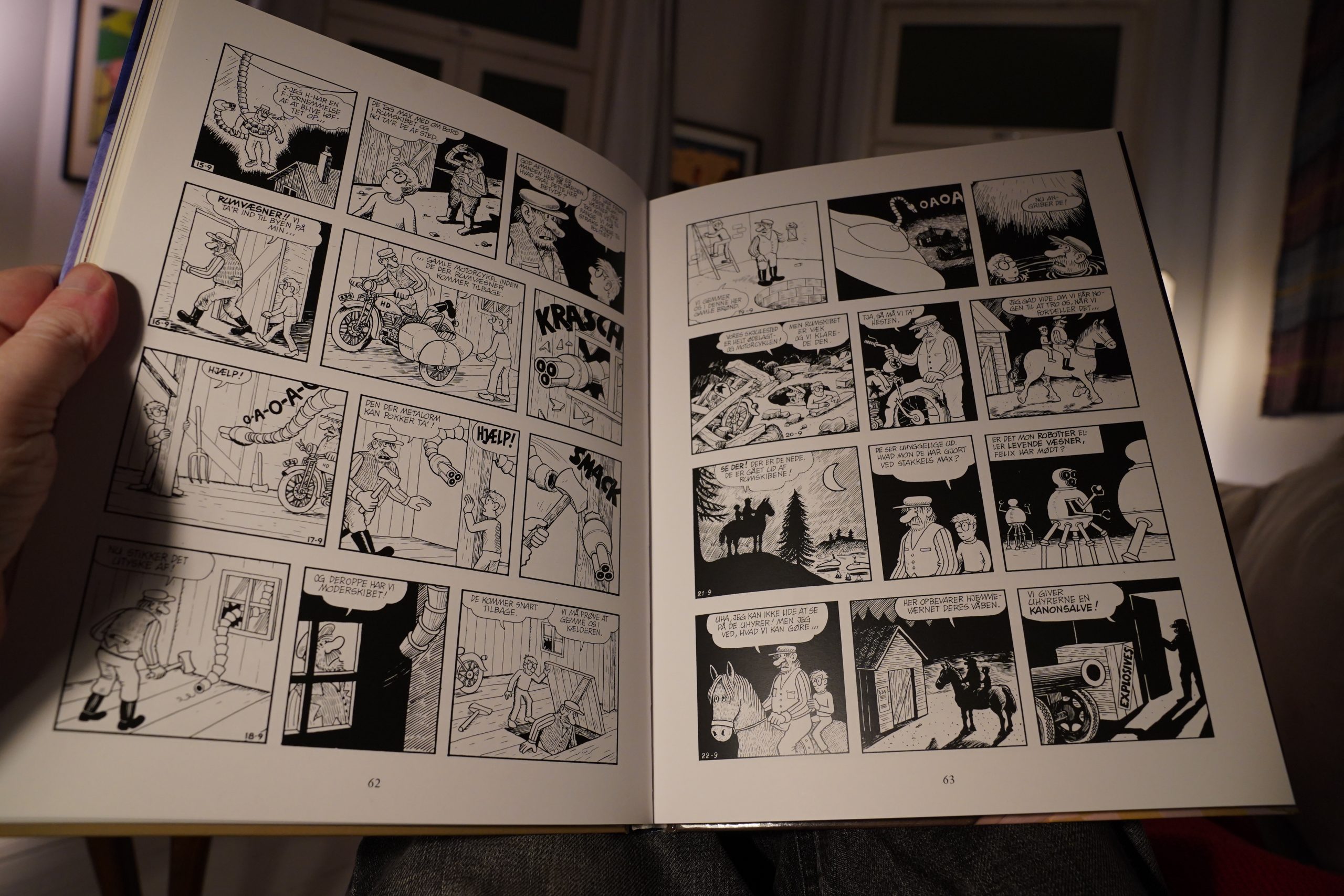 … and then onto his Felix strip. It’s really choppy.

OK, I read 40 pages of this and then I gave up. It’s not that it’s bad — it’s not; it’s got a kinda Gilbert Sheltonesque thing going on in the plot department — but it’s just hard to be interested, because there’s no character. To the characters. And the gags aren’t all that. 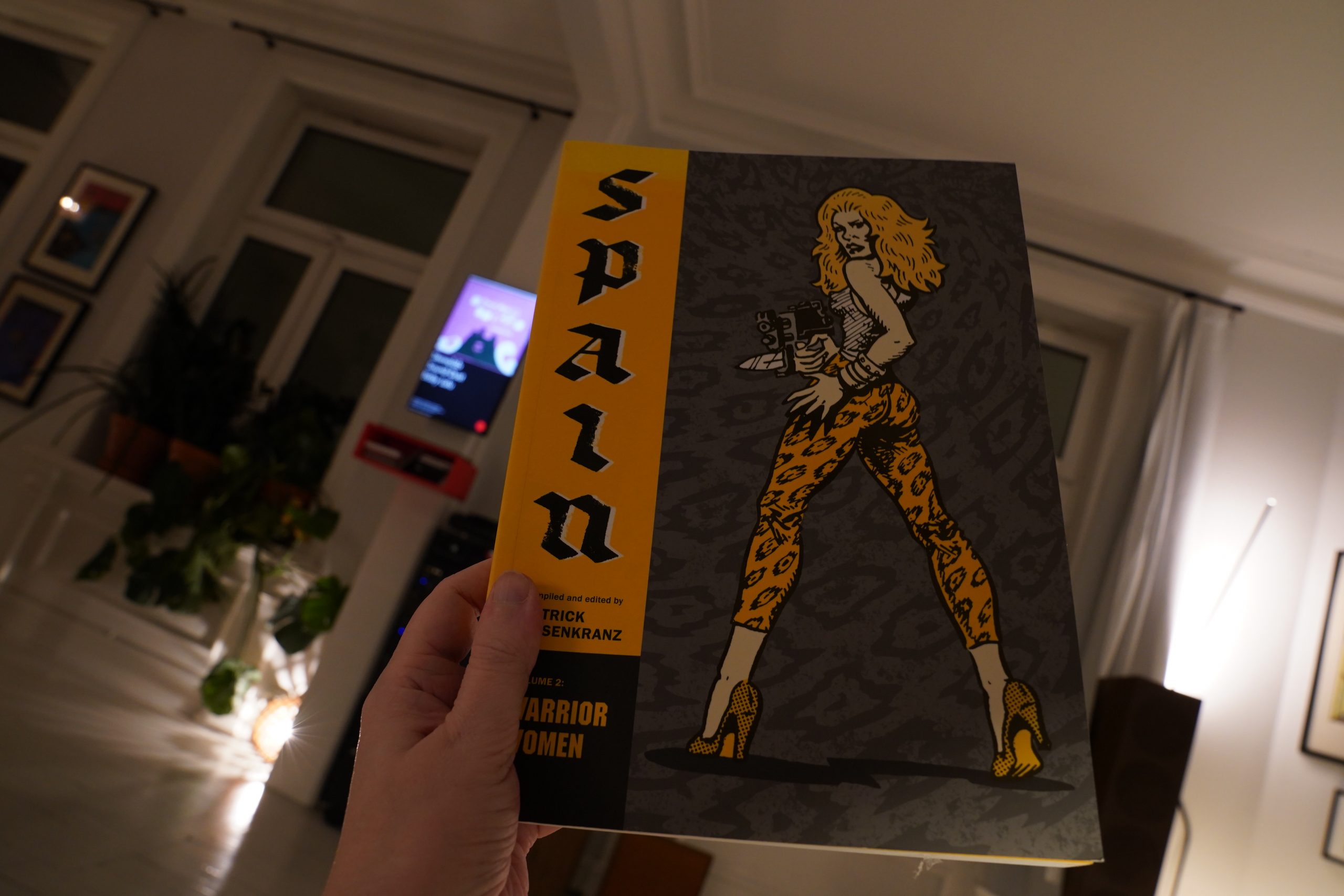 I’m starting to see a pattern to the books I’ve been holding off on reading — most of them are collections.

There’s something about collections that make them seem less urgent to read? And… in general, I really like reading the original books; the context makes a lot of difference when reading comics. In a collection, everything is slightly more bland. Fantagraphics is reprinting all of Spain’s work in a series of themed collections, and this one is about er women. I love Spain, and I can see why people were shocked/enthusiastic about these early strips, but most of them don’t really go anywhere. Like with Crumb (controversial opinion alert), Spain’s 80s strips are much more accomplished. The artwork’s less scratchy, and the stories are, like, you know, stories instead of random things that happen until he’s drawn a sufficient number of pages. Or perhaps that’s not quite accurate. When Spain’s doing a story he feels strongly about (like his autobio/political comics), he’s great. When he half-asses it, like in the skating granny comics or the Big Bitch comics, it’s… well… half-assed. Individually, these stories are amusing, but it was a chore to read them, one after another. This was originally serialised in eight page chapters in L’Écho des savanes, apparently, and (almost) every episode has a setup and a resolution, but it’s one continuous story about a … very complicated family. I really thought this was gonna suck, but it’s fun. It’s a large cast of characters, but the creators manage to get some characterisation in amongst all the plot.

However, the series kind of… peters out instead of reaching a resolution. If they’d stopped about … six? chapters before the end, then it might have felt like a real ending.

But the first three quarters are pretty entertaining.