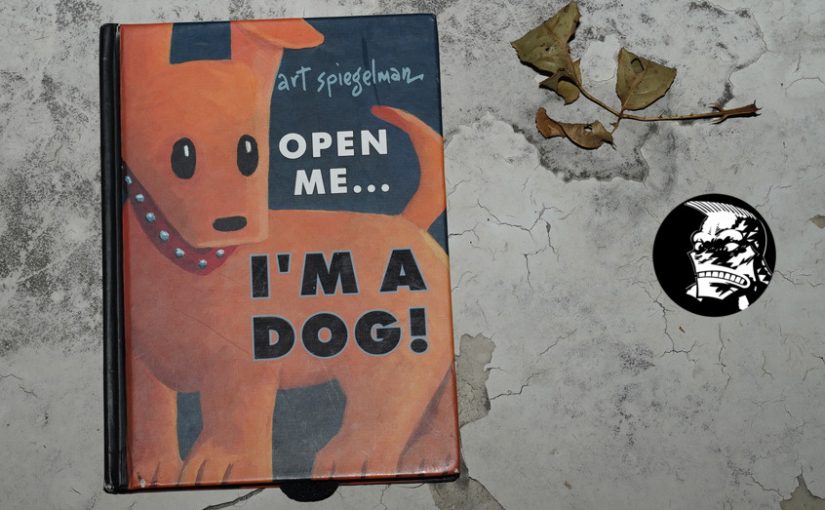 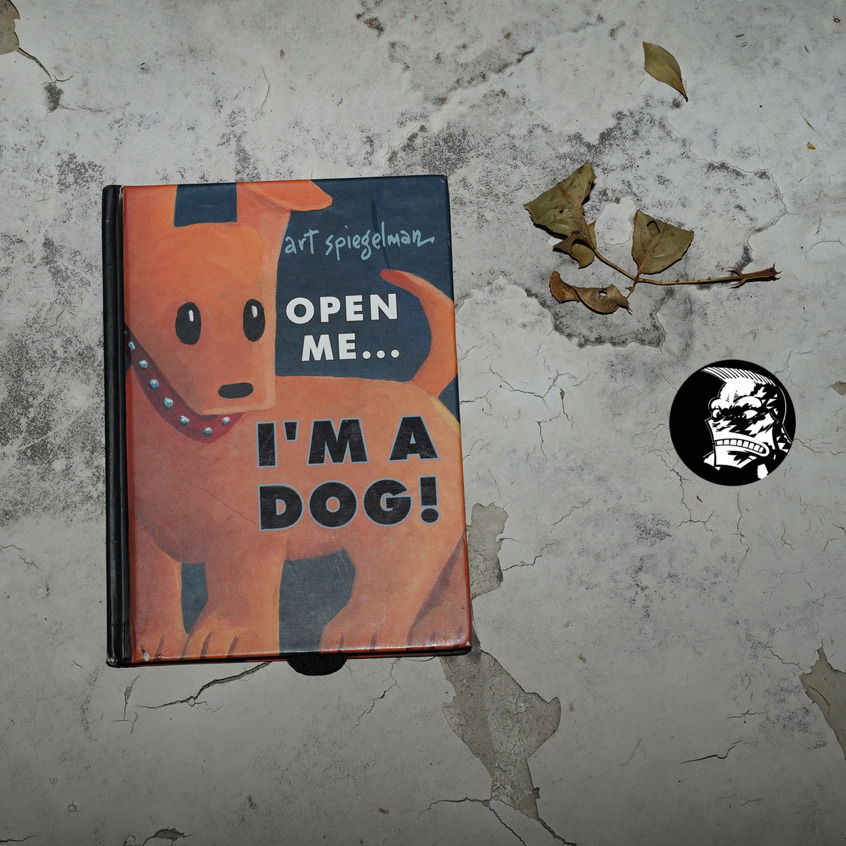 After Maus, everybody waited for Spiegelman’s next hefty masterwork… 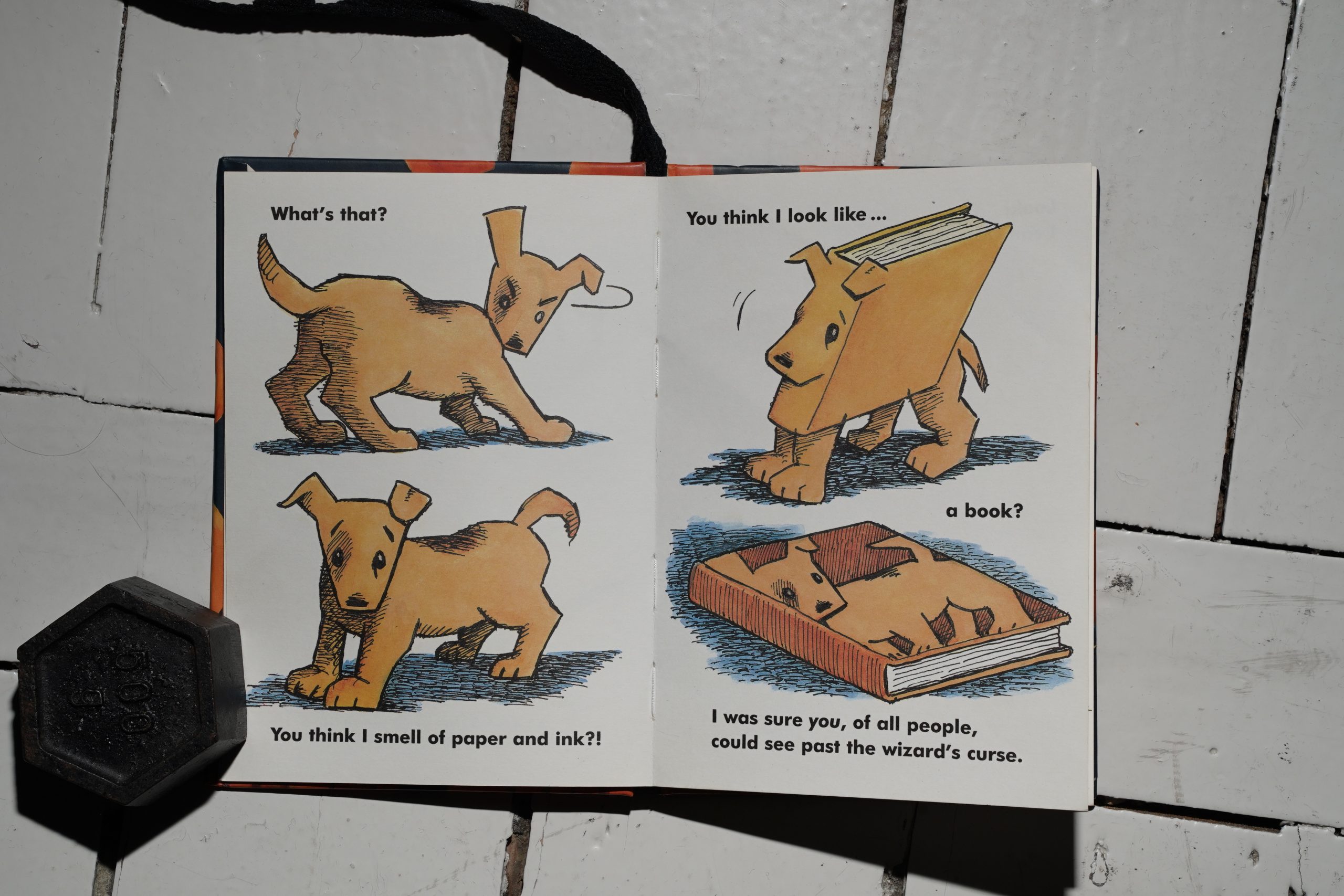 … so Spiegelman made a book for young children instead. 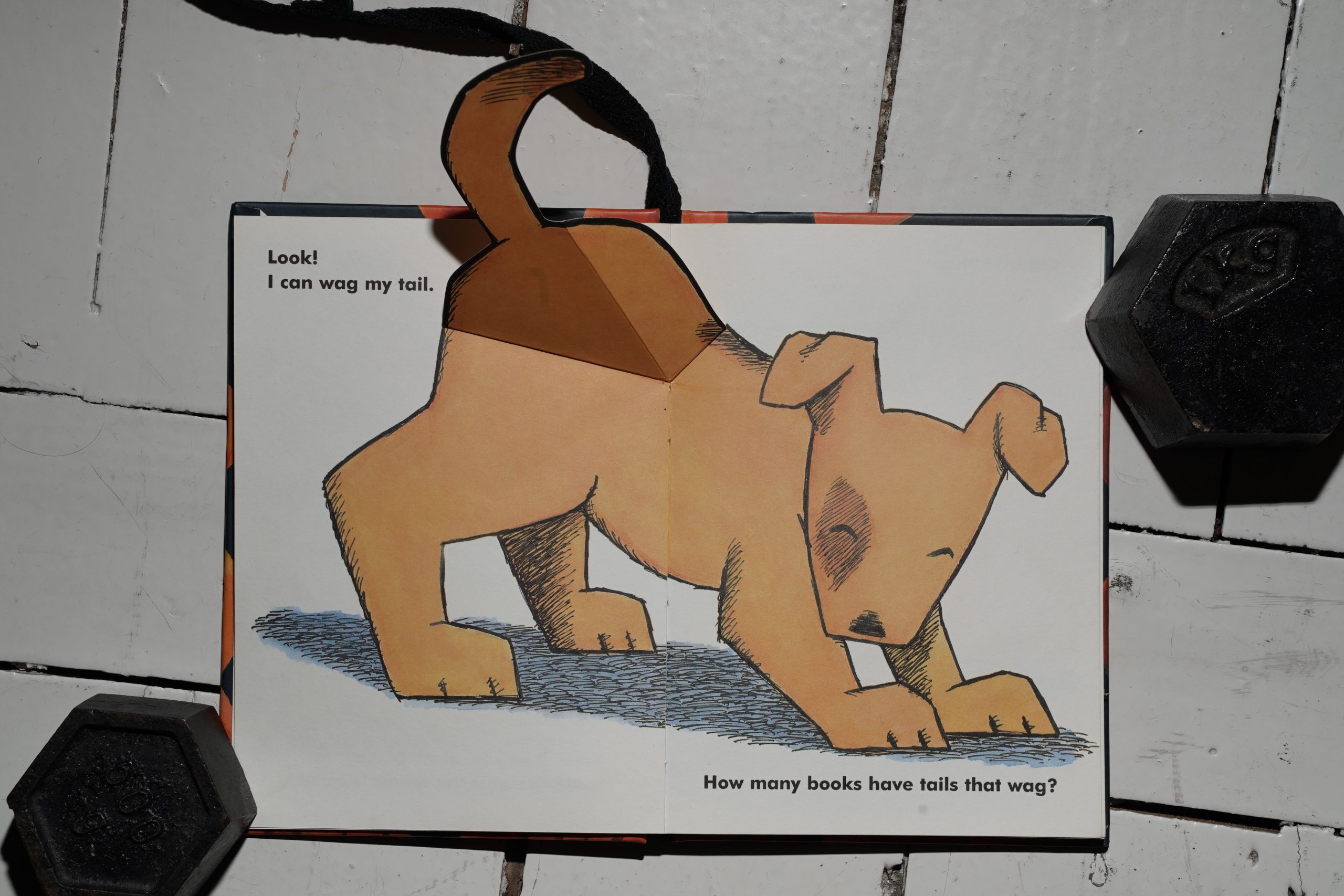 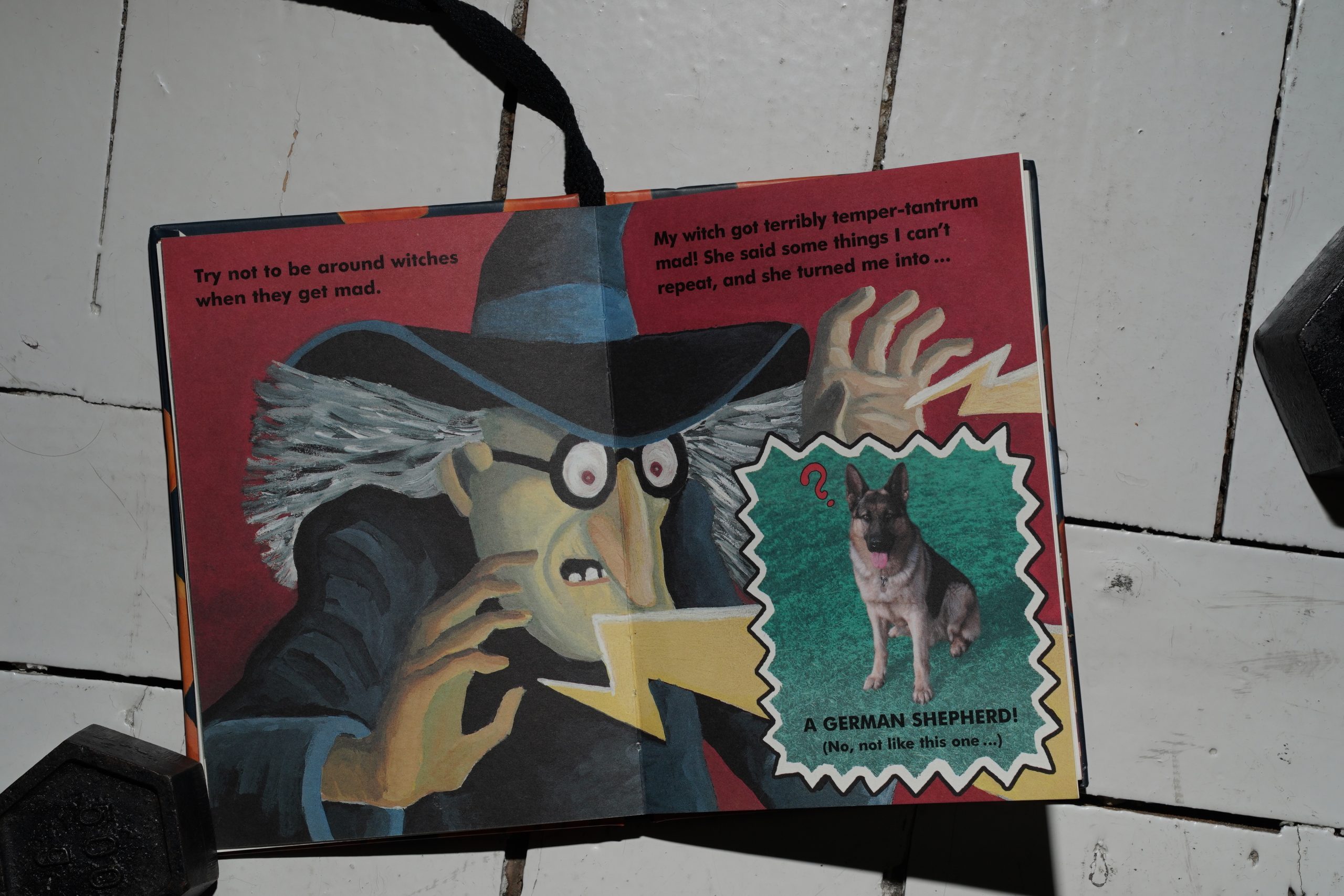 Instead it tells a good yarn about this dog that’s been shaped into a book. It’s refreshingly straightforward. 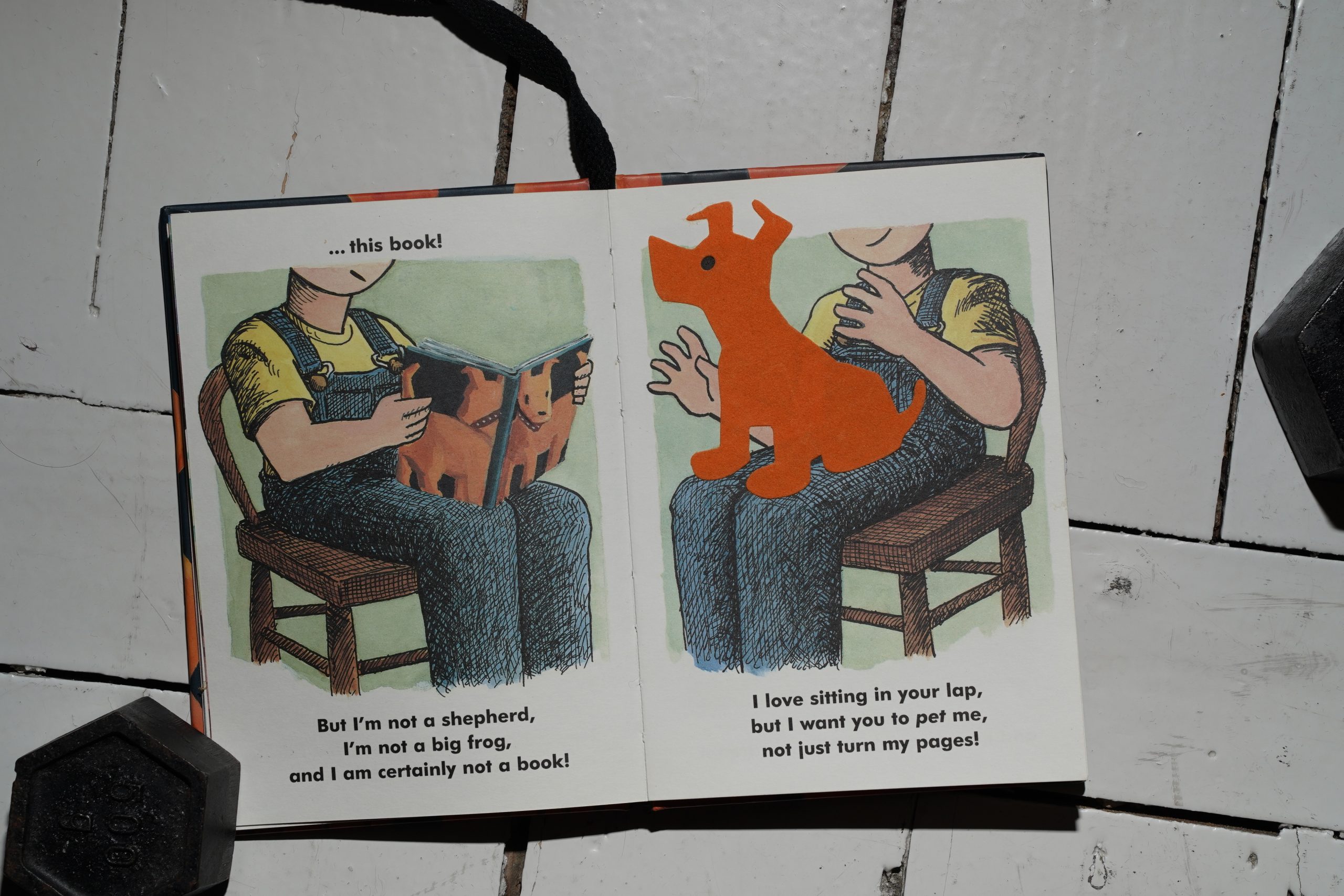 And it’s tactile — both the end papers and this figure are somewhat felt-like. 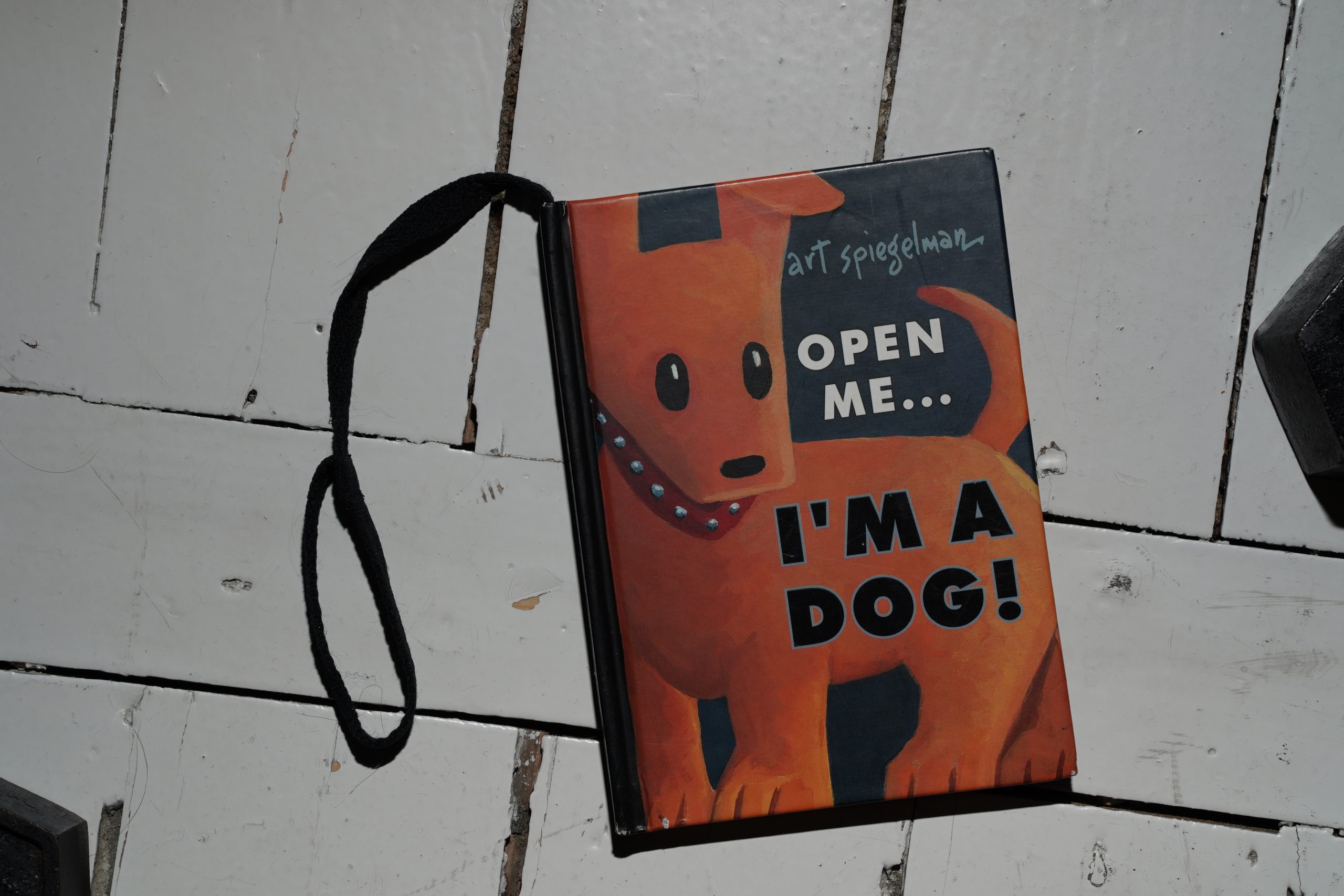 It’s got a leash!

I can totally see kids loving this book and wanting to read it over and over.

GROTH: You ‘re also writing a children’s book right now.
SPIEGELMAN: Yeah, it’s written. I’m just waiting for my
agent to finalize the contract before I start the finished
paintings. It’s based on an idea I had when I was 20, and
taking too many psychedelics for my own good. This
seemed like it was a good time to do it. I tried it out on
Dashiell, my 3 1/2 year old kid, and he seemed to get it.
GROTH: This is a book you ‘re going to illustrate as well as
SPIEGELMAN: It’ s a picture book. The total number of words
is probably under 500 easily. It’s an existential kid book:
Pat the Bunny meets Foucault. [laughter]
GROTH: That sounds charming! Do you consider this part
of a holding pattern?
SPIEGELMAN: Ouch. In a way. It’s hard to figure out what
long comix work I’ m capable of doing right now, so, short
of driving myself crazy while feeling blocked there, I
figure that Open Me. I’m A Dog has its pleasures. I have
can be O.K. even if it doesn’t feed my largest ambitions.
I will also be taking on a book project called Comics
101. That’ll be an adaptation of the comics lectures that I
used to give at the School of Visual Arts — my idiosyn-
cratic, historical and aesthetic overview of comics, and
to accept that making something finitein scale and scope putting that into some kind of hard-copy form after all
these years. It seems to me that ifl’m going to continue in
this kind of self-lacerating mode, it’s another holding
pattern. It’s something that’s mine to do, something I’ve
given a lot of thought to over the years. It will probably be
essays on about 14 or 15 cartoonists.

The best part is when the honest to Abe dog is triumphantly proclaiming his true self on his hind legs. He looks so happy. I wish he didn’t have to beg, though, or state his case compared to real live dogs. The sweet part is when he knows it. That’s the charm of the book. I’d want him around.

I can’t wait to adopt this dog for my shelf!

Some people think it’s a bit much:

It’s a winning conceit, with ingenuous tongue-in-cheek illustrations, though, like Lane Smith’s Happy Hocky Family (1993), some will find that much of the humor is pitched over the heads of its target audience.

I think I read somewhere that it was a commercial success, but I can’t find it now…