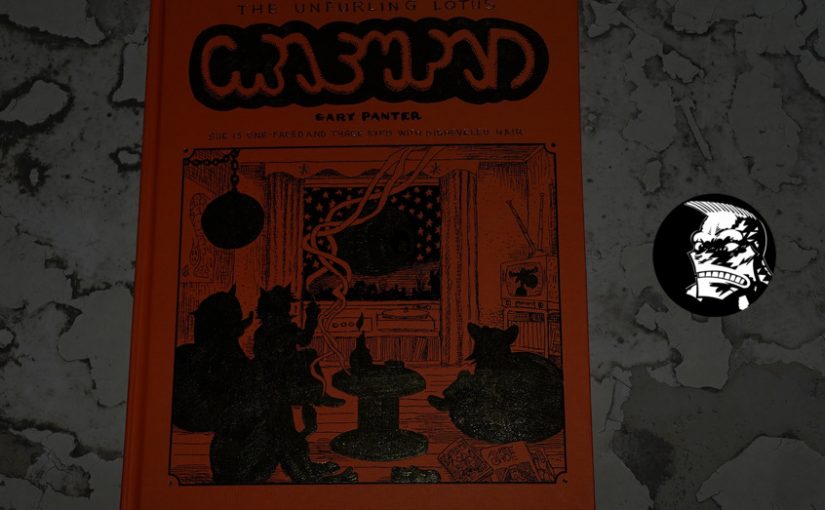 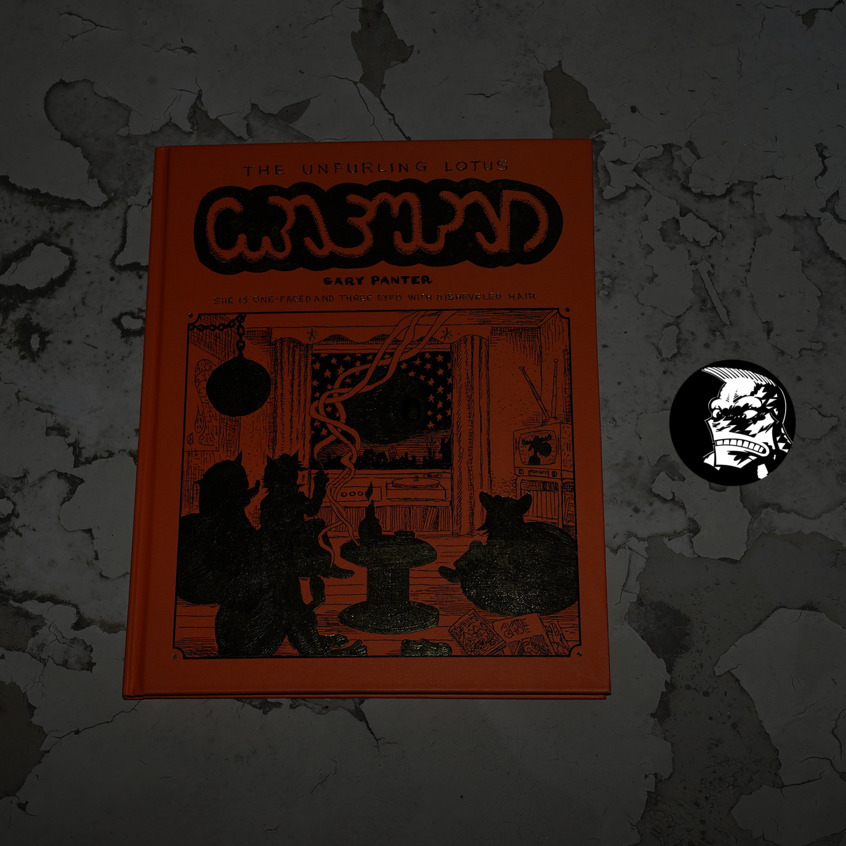 It’s brand new! Ish! Published earlier this year, and I haven’t read it yet. 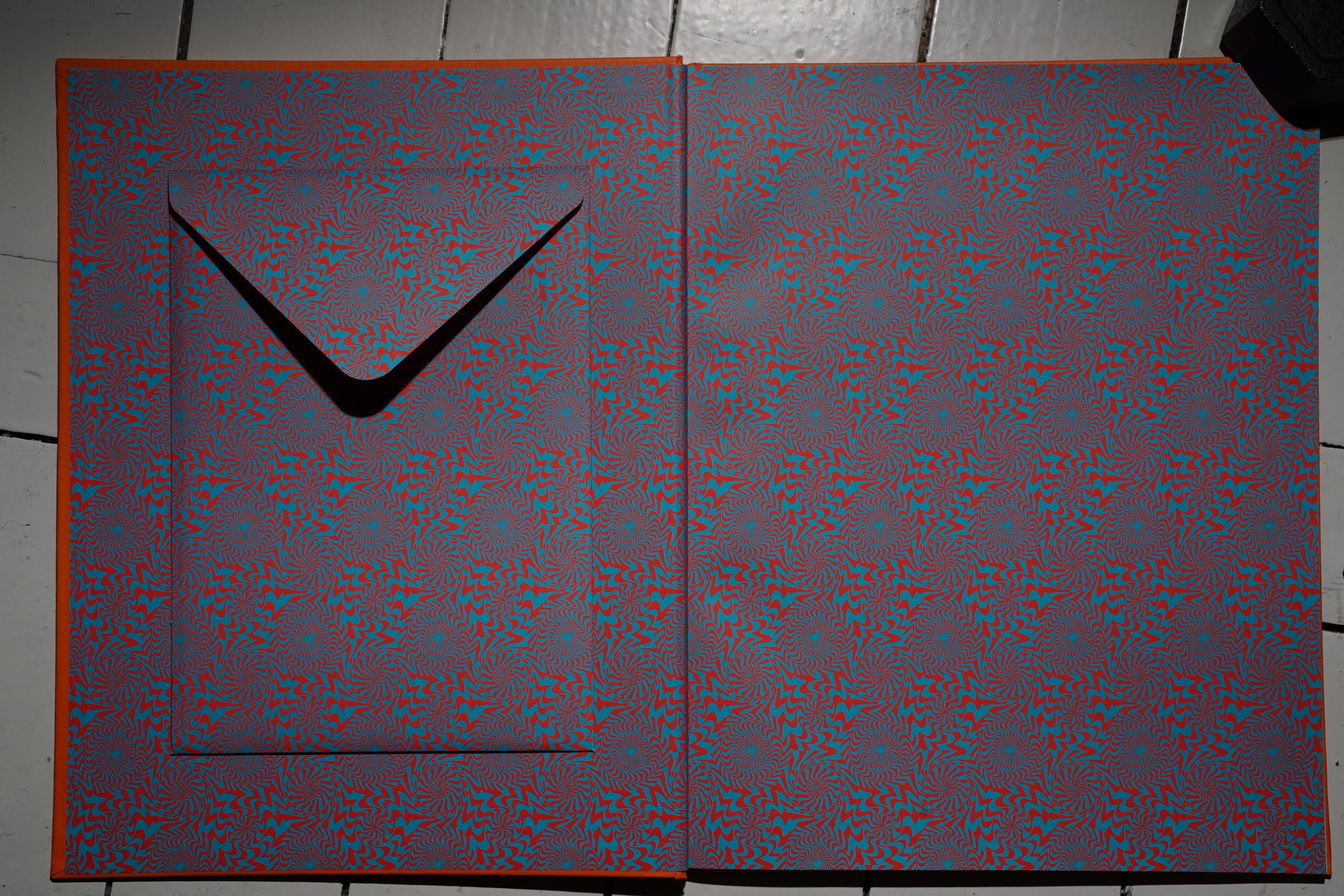 This is a huge book (like all of Panter’s books with Fantagraphics)… but this one has a pouch on the inside front cover? 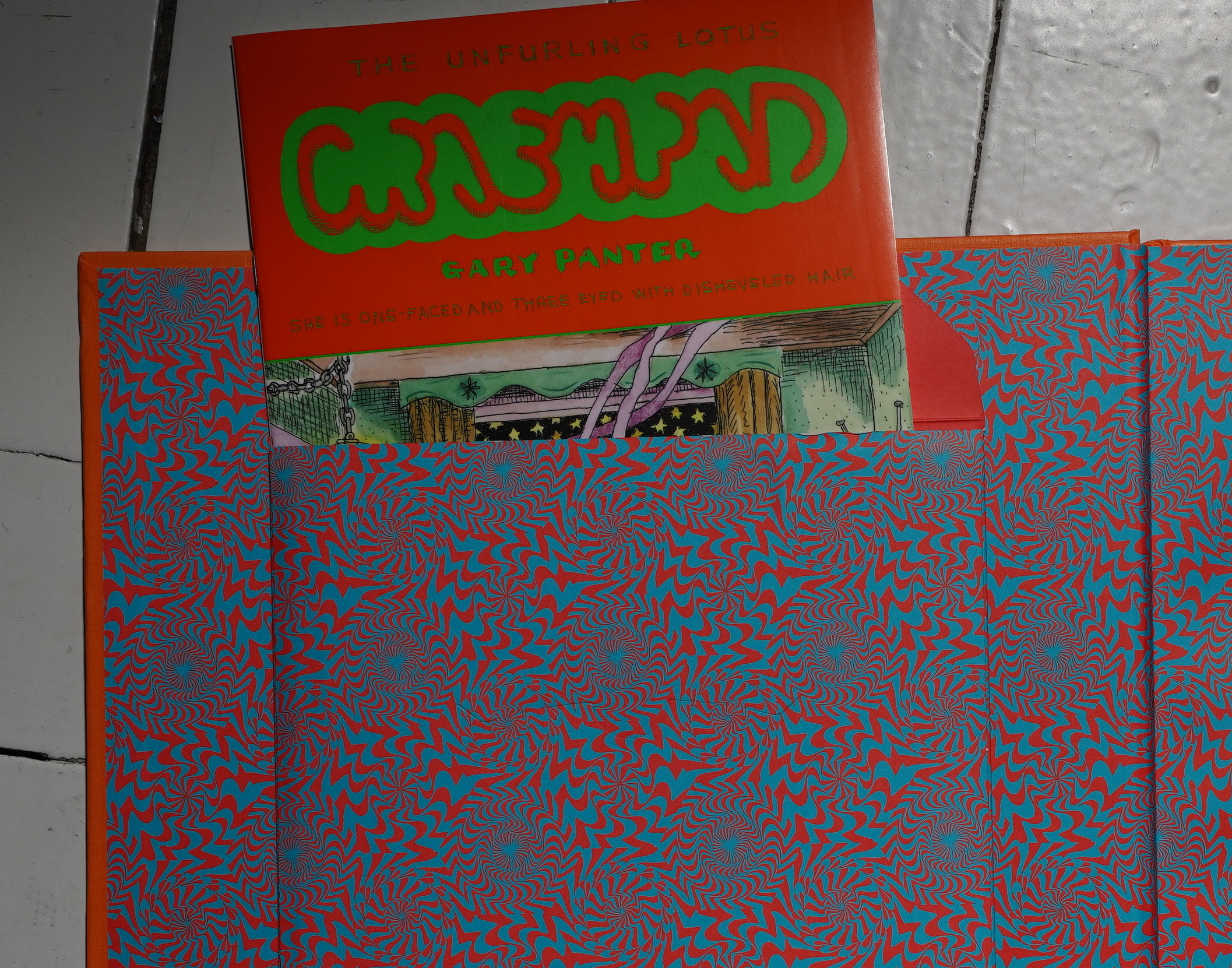 With a comic inside!? What? Let’s leave that for later and read this book… 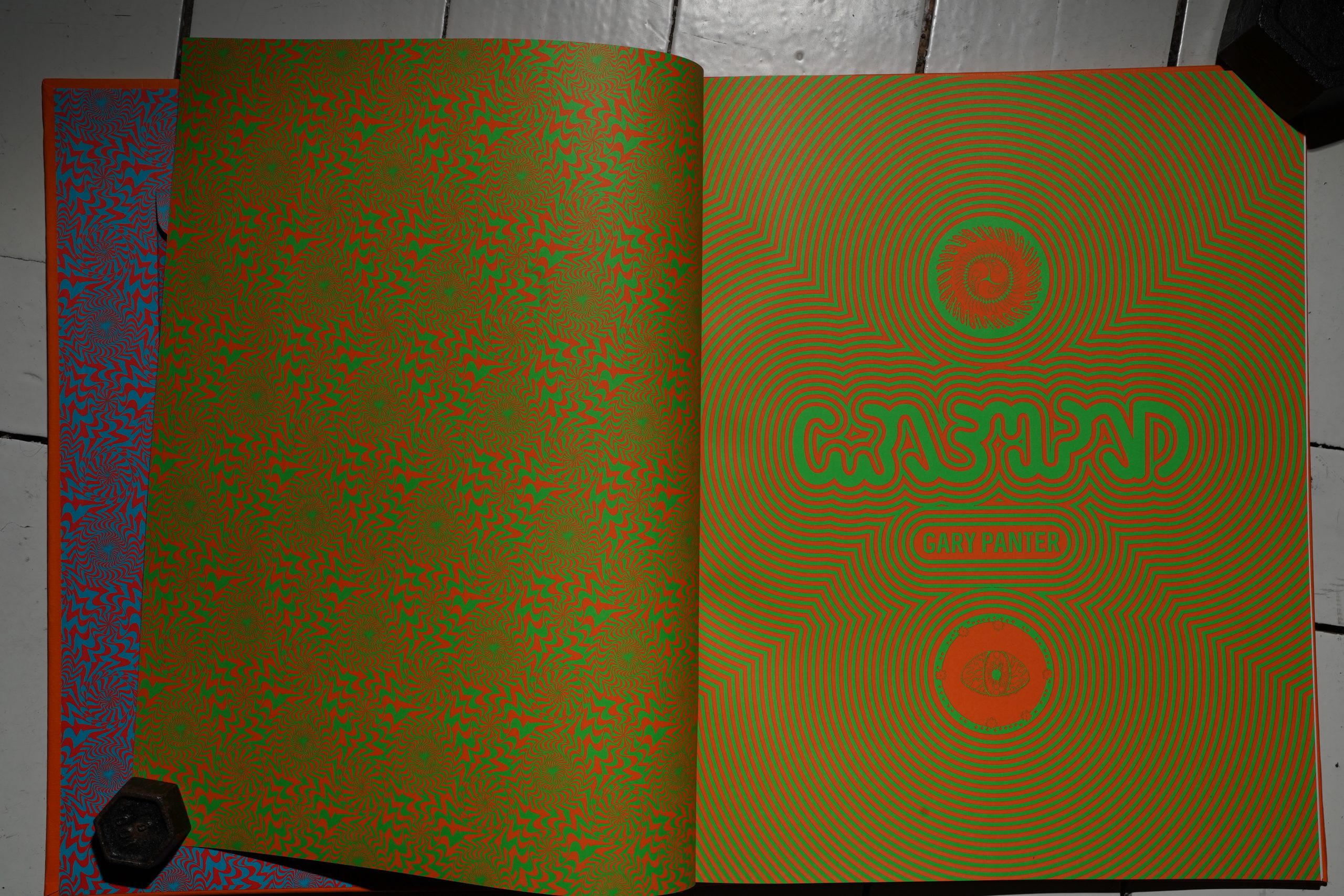 Groovy. At this point I wondered whether they’d sprayed the book with cannabis juice or something, because I thought I could smell it, but it may have been just synesthesia. 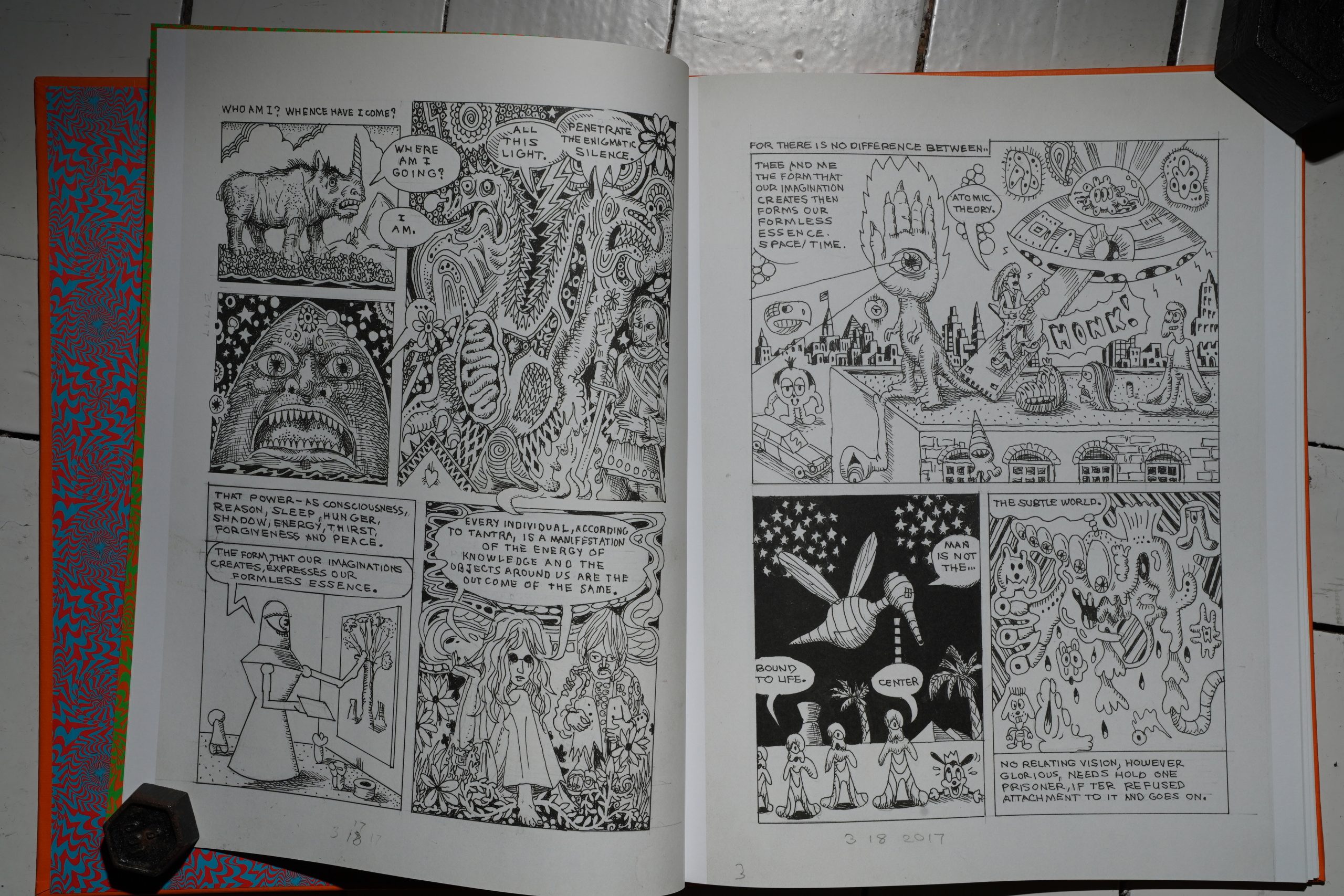 So this book is one long trip? Panter’s doing a more straightforward style than his previous books, which were even more filled with symbols and stuff…

And it kinda looks like a facsimile edition kind of book: We get to see the pencils in the margins and everything, and the pages reproduced are slightly smaller than the book itself, so the pages are off-white, but with stark white borders. Odd, but it looks good. 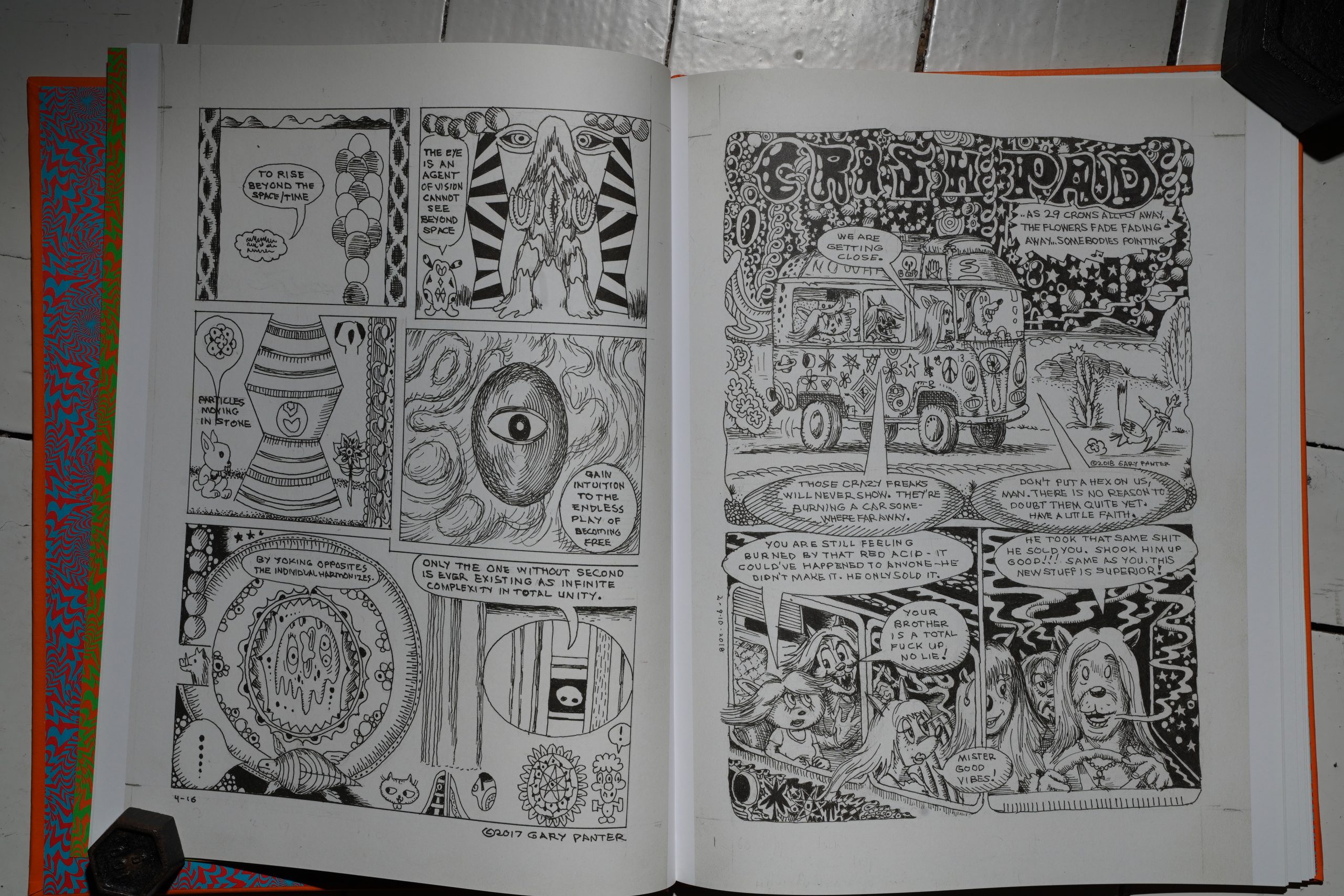 But then that turned out to be just the intro, and we start on a story about some hippies dropping acid in Texas. 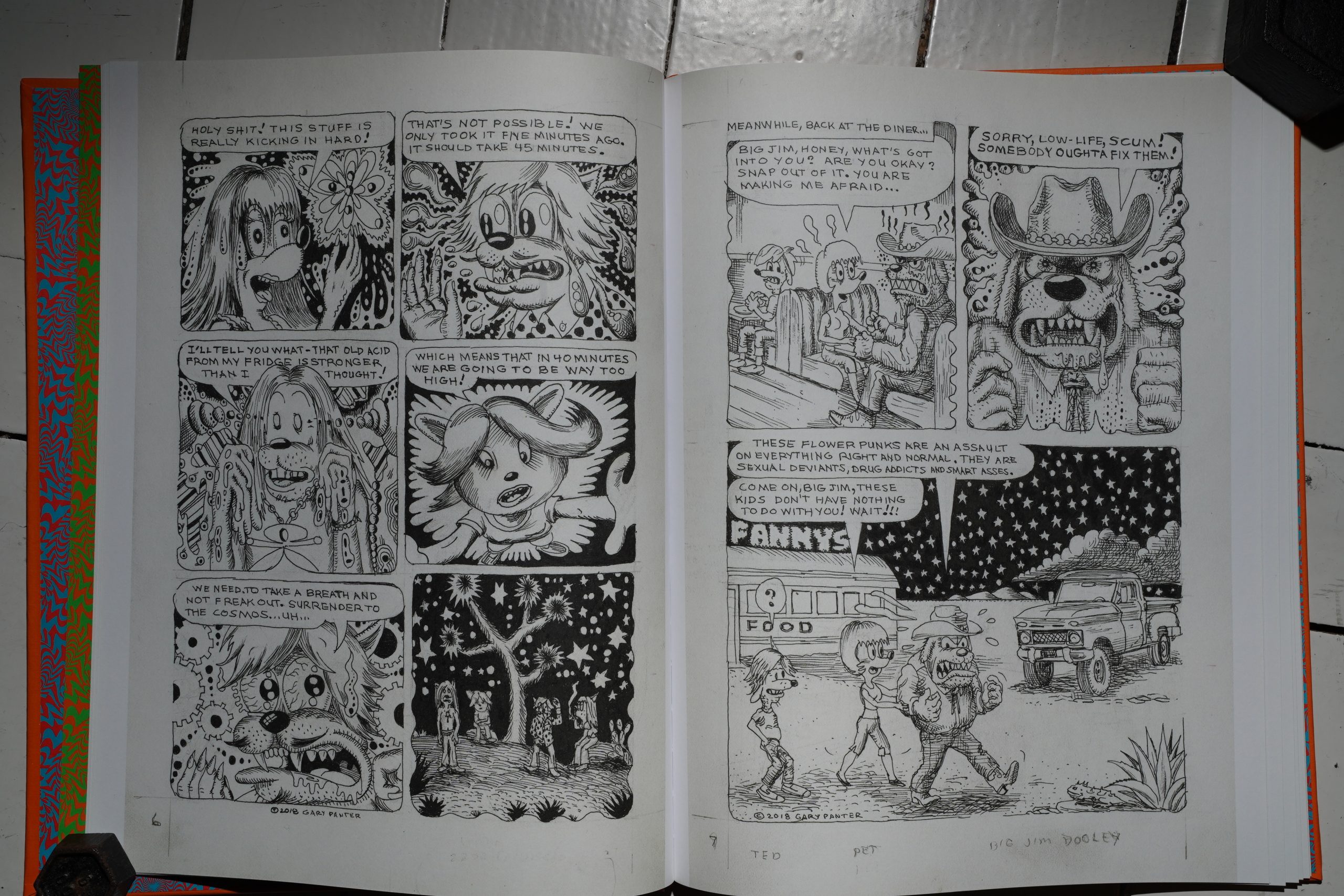 There’s hillbillies and stuff! It’s great fun — I guess it wouldn’t have been out of place in an early-70s underground comic, but not quite: There’s something a bit more unsettling about it all than would have been the norm back then.

But… this is a hugely enjoyable book. 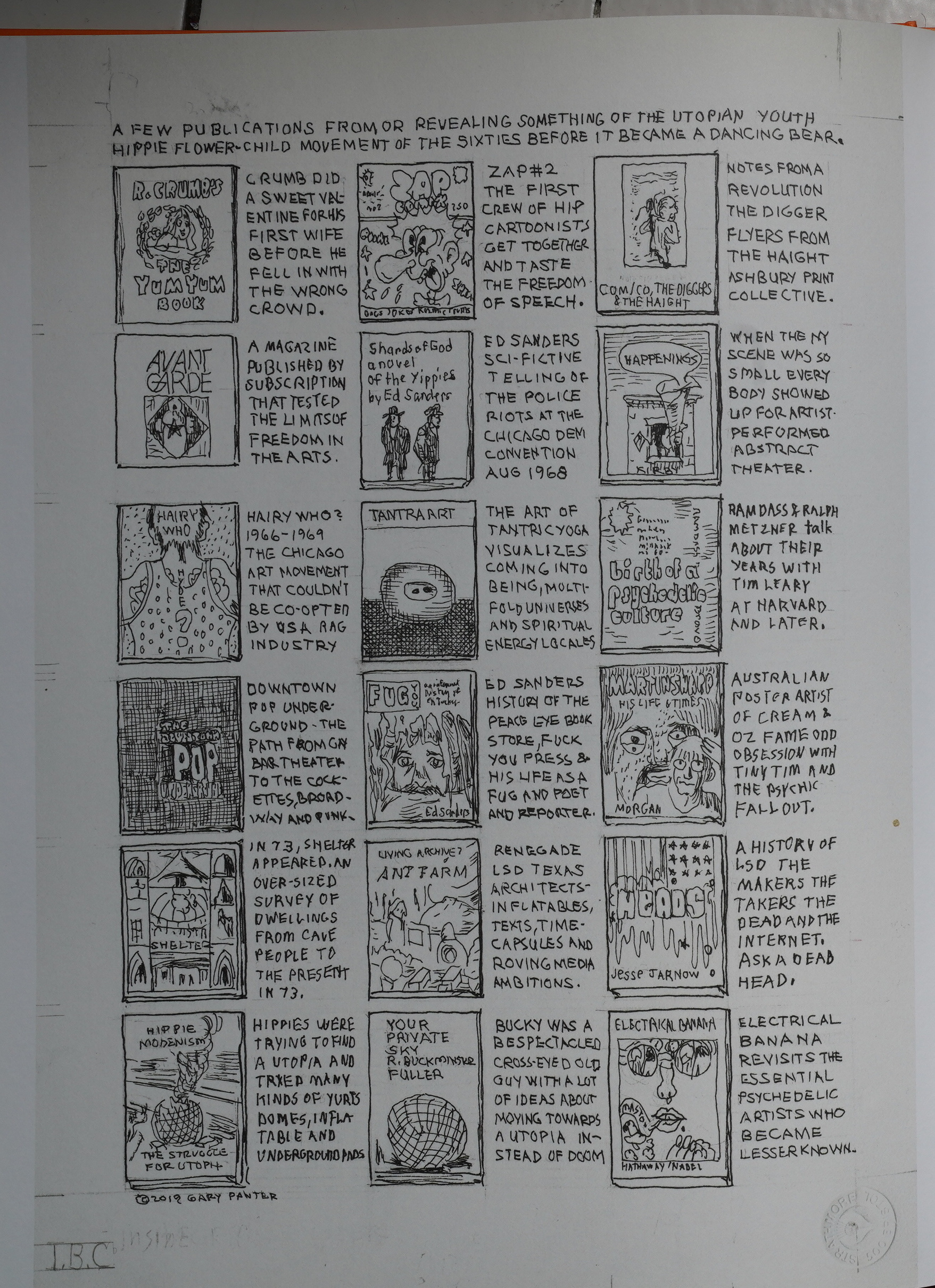 And then a checklist of good hippie stuff. 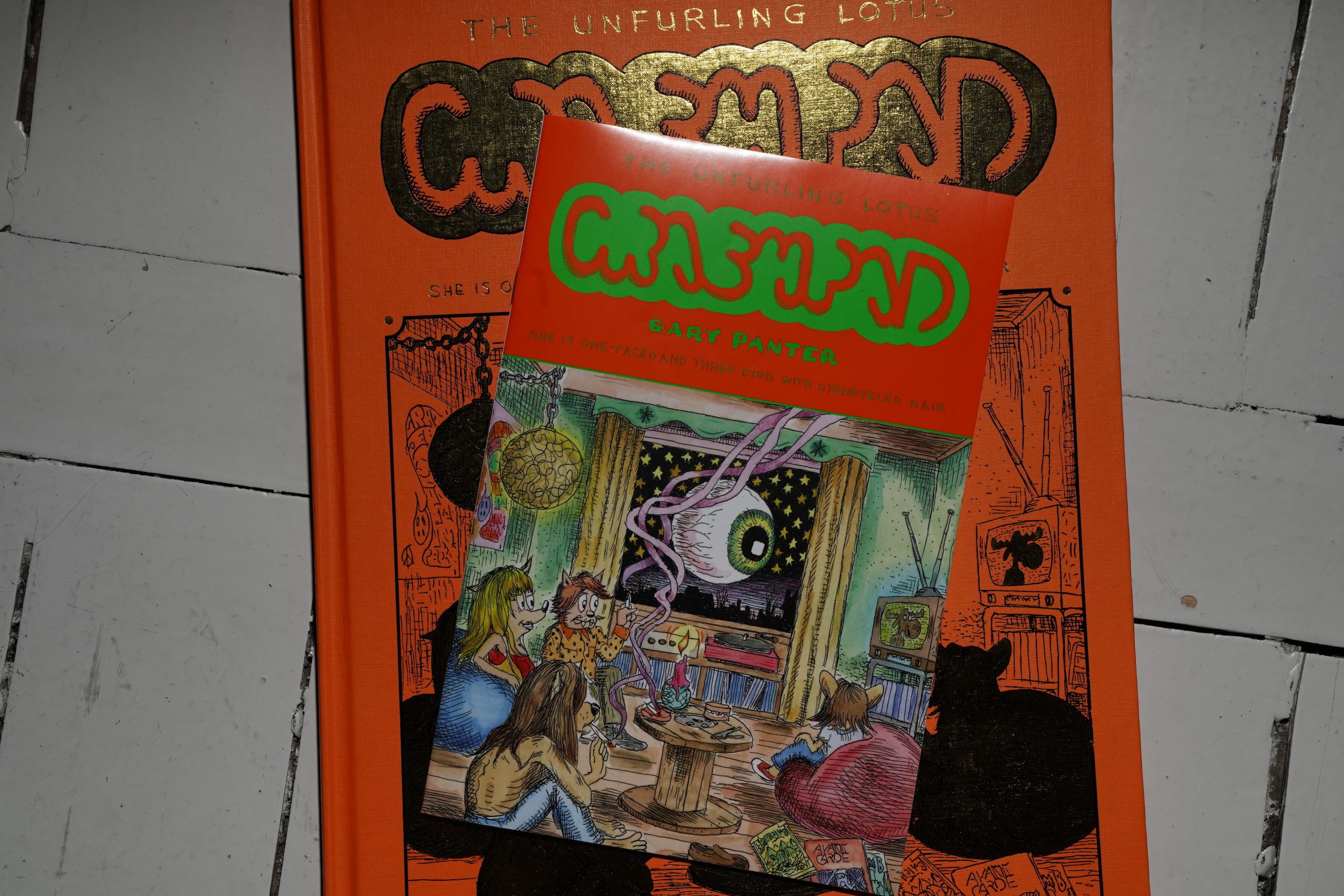 And then there’s the comic book that was included… 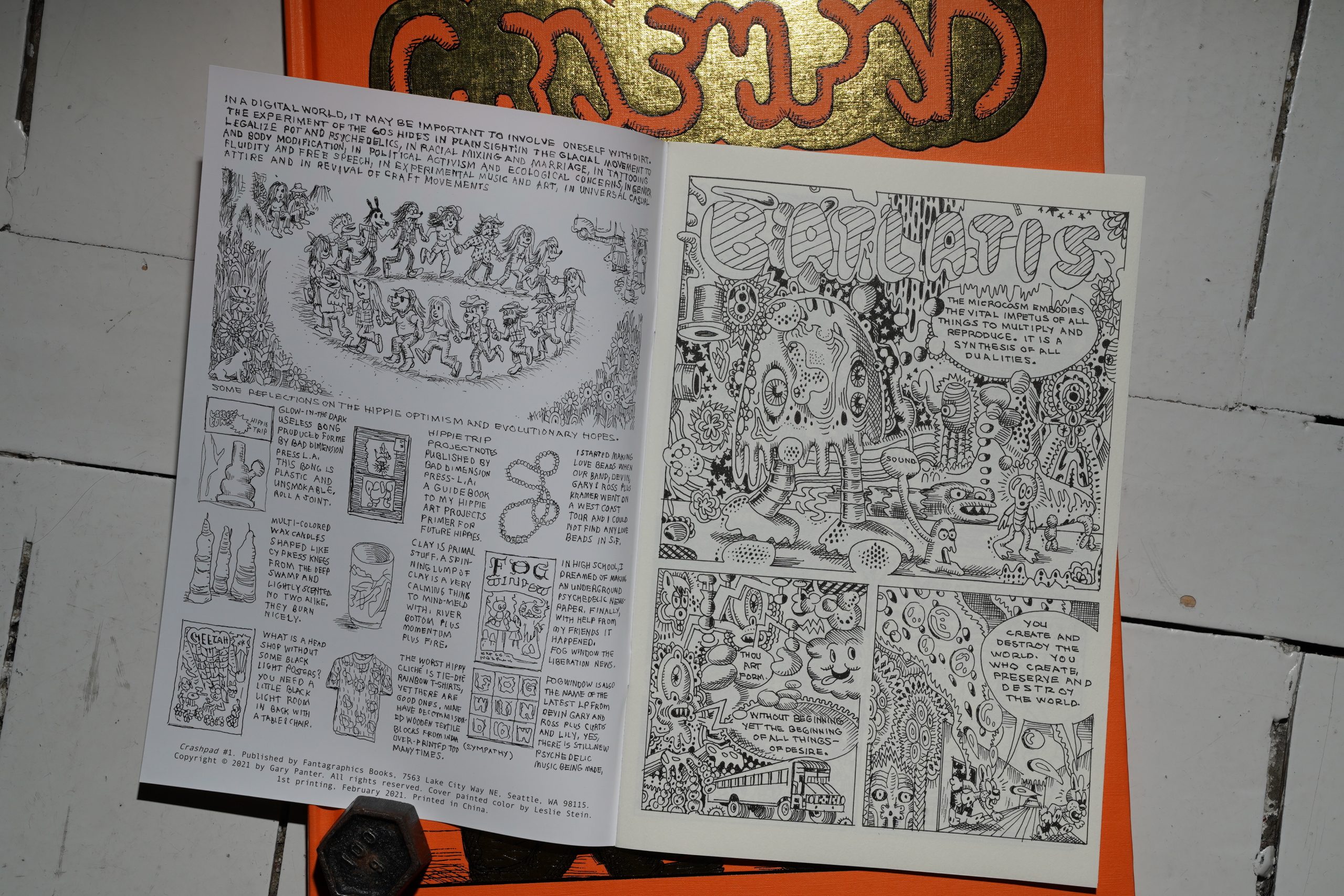 … which turns out to be exactly the same material that was included in the big book. But now reproduced in the normal way, so you can’t see the pencils. So… is what we have here a “comic book” and then a reproduction of the artwork at the size it was originally drawn?

It’s interesting, but I wonder what the idea behind this was. Perhaps Panter really wanted to publish a classic Underground 32-page pamphlet — but that’s almost impossible to do these days (unless you’re willing to lose money), so the large-format book was the only way to get that to happen?

Ah, the comic book was part of an art installation:

In 2017, Panter created an art installation, Hippie Trip, inspired by his first visit to a head shop in 1968. As part of the exhibition, he created this version of an idealized underground comic, a psychedelic trip through the Hippie scene in Panter’s rough-expressive style. Both a narrative story and an art object itself, Crashpad is presented as a deluxe hardcover reproducing Panter’s original pages at full size as facsimiles (crop marks and all). Plus, the book comes with a newsprint version of the comic tucked into the front. This gives readers the experience of tripping on Panter’s story in the form of an old-school underground comic.

Comics typically try to hypnotize you, as prose and other forms do, into believing the story for a moment. Experimental comics take those conventions apart and reveal them formally. I do both. Crashpad is a meditation on the optimism of the cultural explosion of the ’60s, in which things were tried out by idealistic kids, and some of the things worked and were worthy of developing, and some of the things were failures or problematic to different degrees. I wanted to do a comic book in the form that comics took in the early ’70s, but people don’t really make comics like that anymore. The market for these art comic books is a fetish market, so making a fancy book with a lowly book inside was a way to address that time period and those topics that got traction in the ’60s and early ’70s.

Besides, the phantasmagoric ride — replete as it is with deliriously imaginative visual wonders rendered with just plain enviable skill — is every bit as important as its endpoint, right? And yes, so often that sentiment, while technically true, is utilized in service of mitigating the effects, both immediate and lingering, of an unsatisfying conclusion. Rest assured, though, that such is hardly the case here.