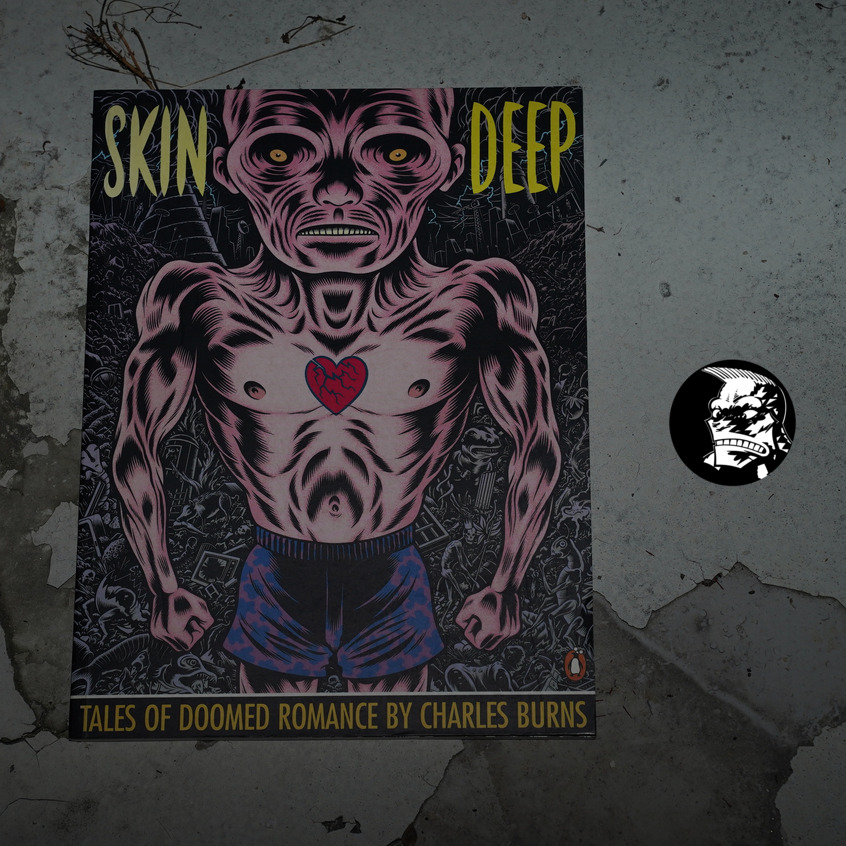 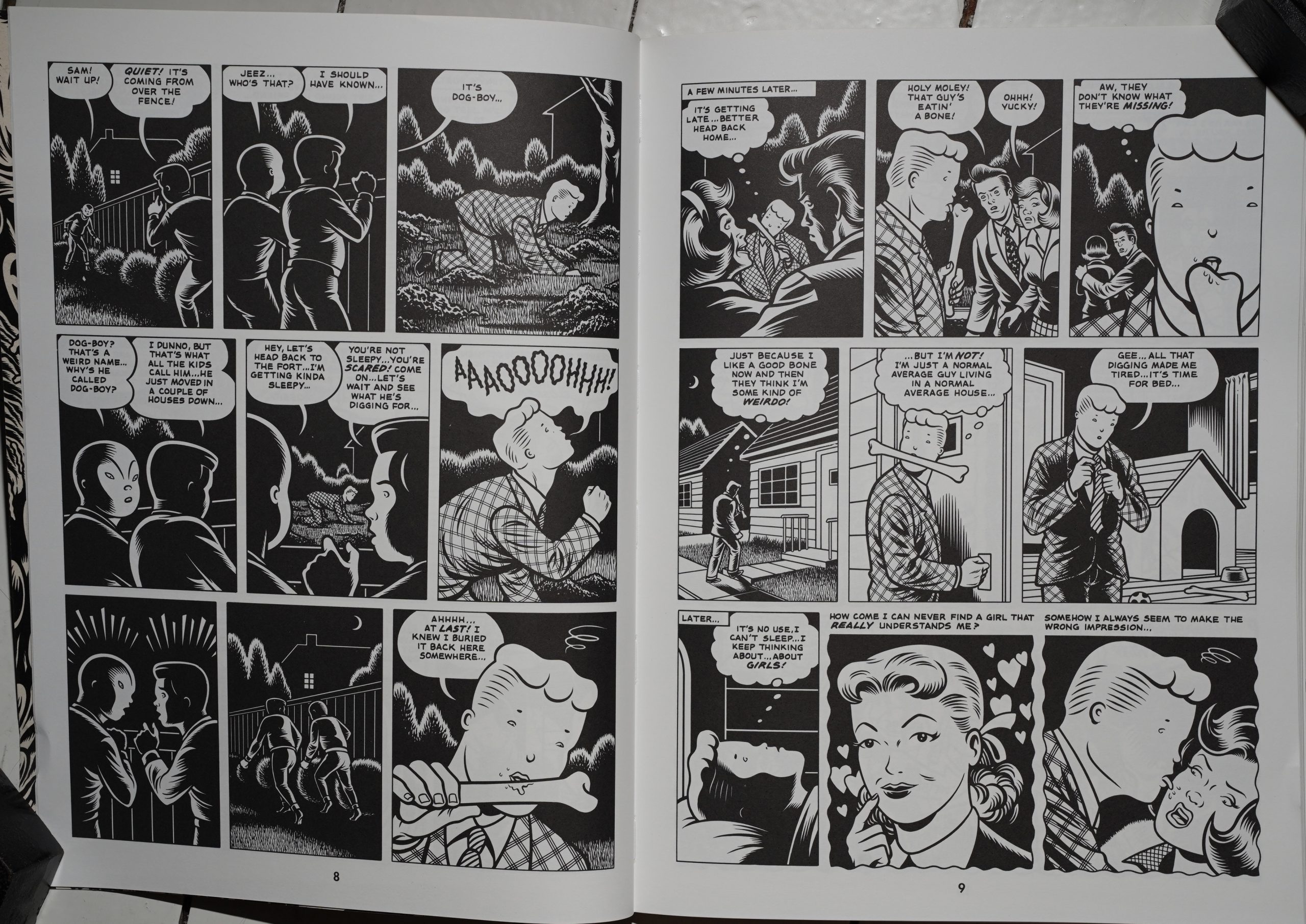 This is the second Burns collection — the first was from Pantheon in 86 (and apparently didn’t sell), and this one is from Penguin. This collects mainly Burns’ Big Baby strips, but Big Baby doesn’t appear a lot here: In the first story, he shows up to introduce us to Dog Boy. 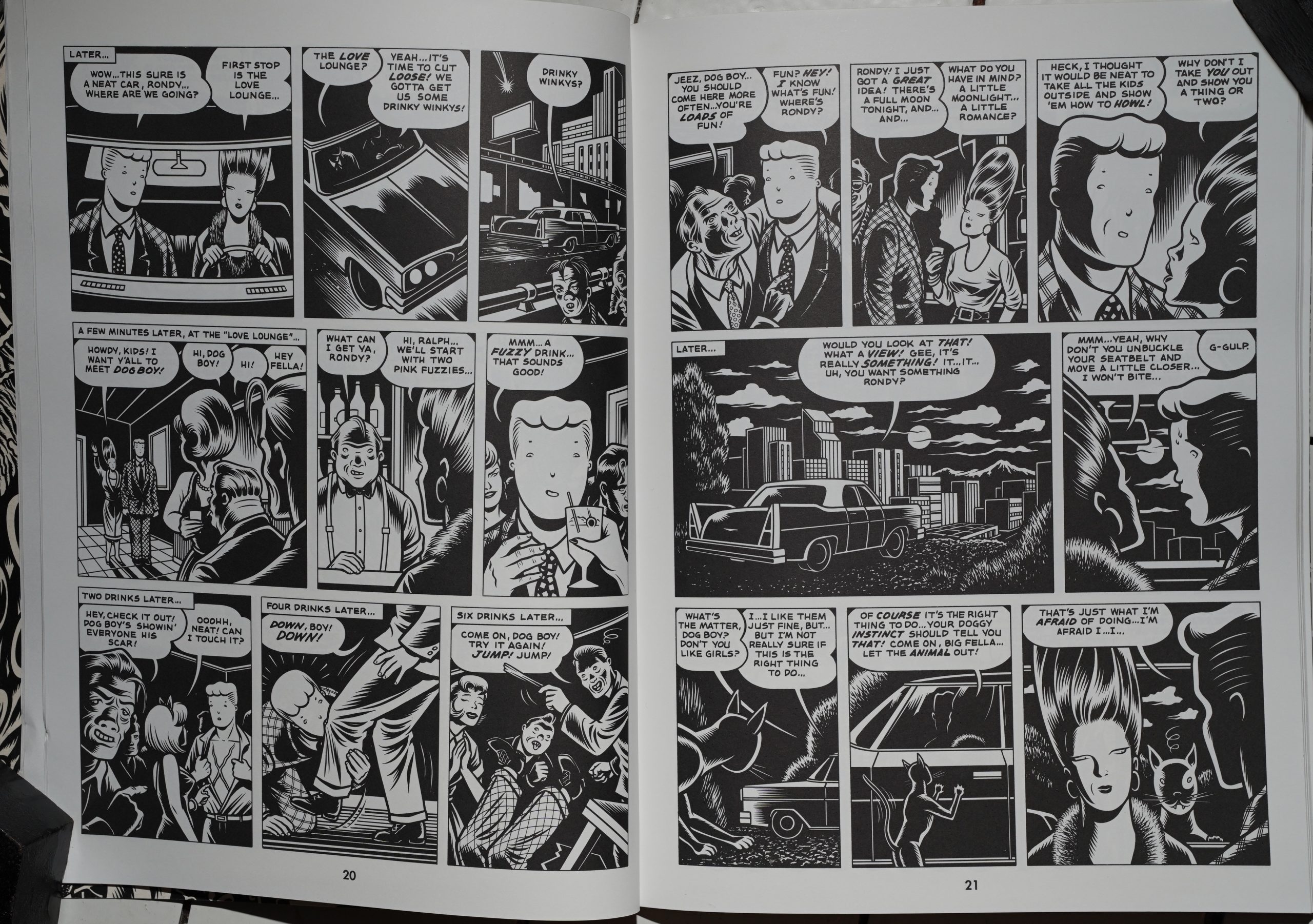 It’s a fun story, and Burns’ artwork is super sharp. I mean, even more than usual. 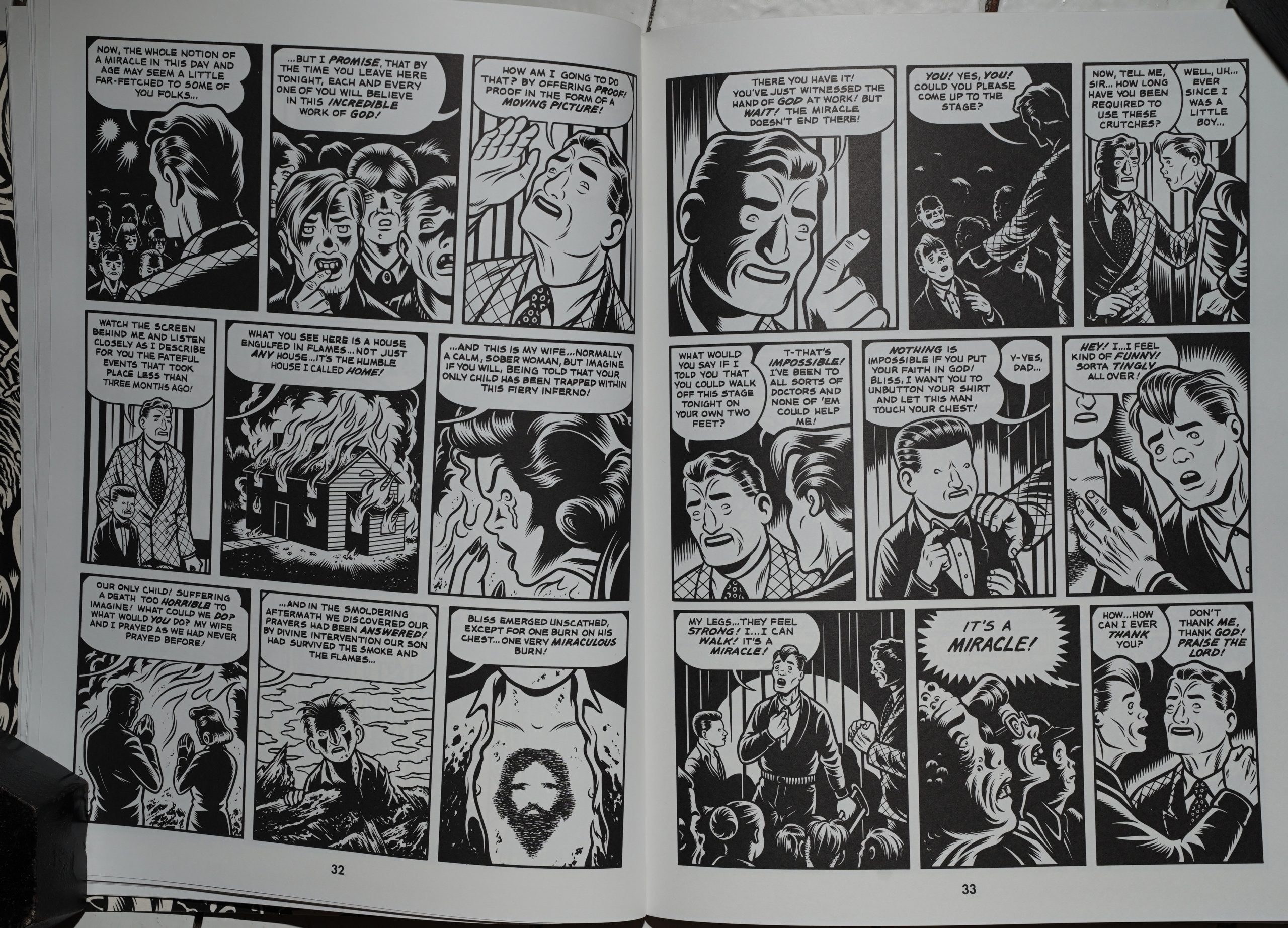 Then we get another odd segue into the main story — which is about a preacher, and half of it is told as a recap. It’s a very odd reading experience — it feels very formless, and it’s… it’s kinda boring? 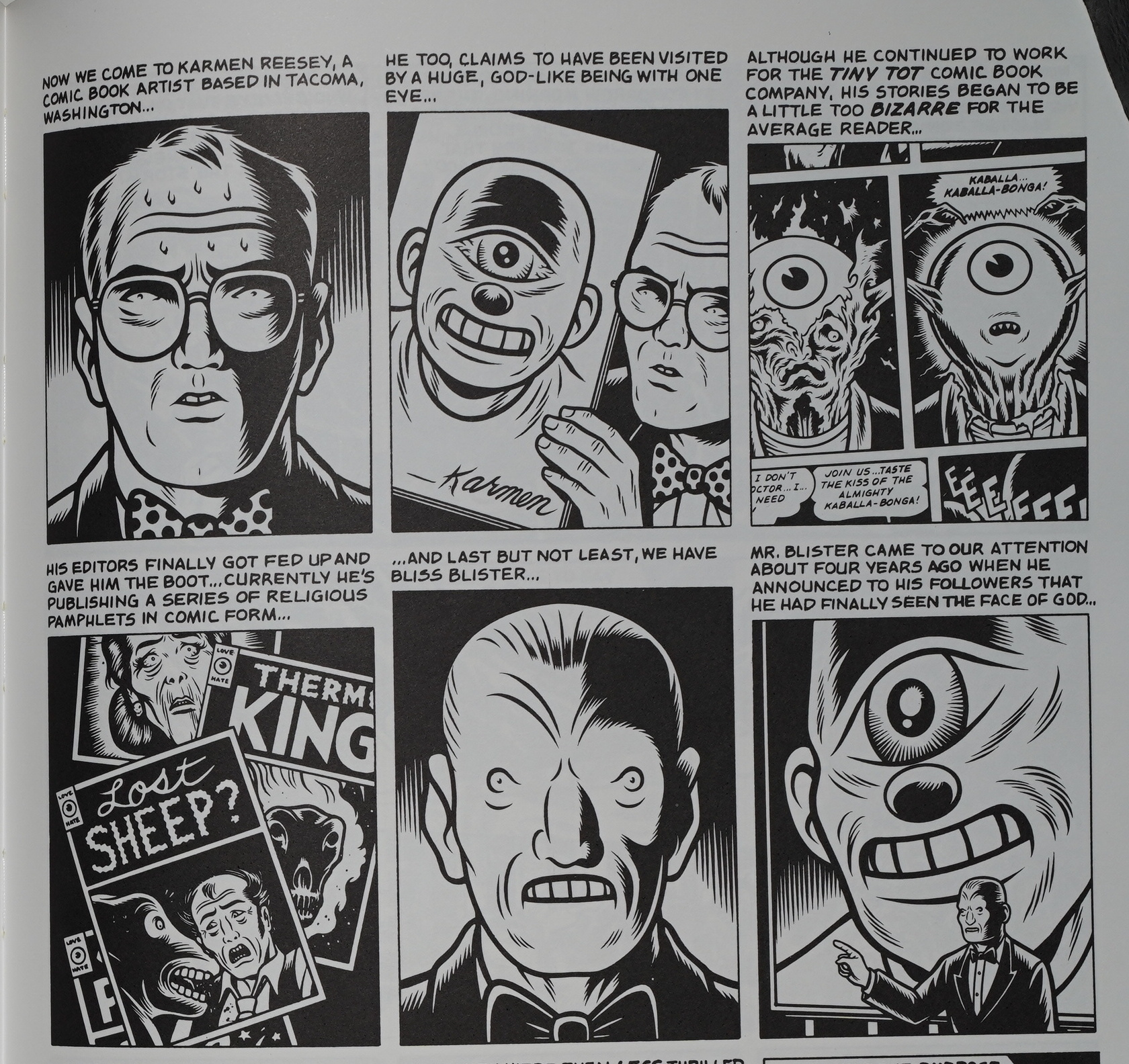 Except for this bit, where Burns puts himself into the story. (Sort of.) Very post modern. 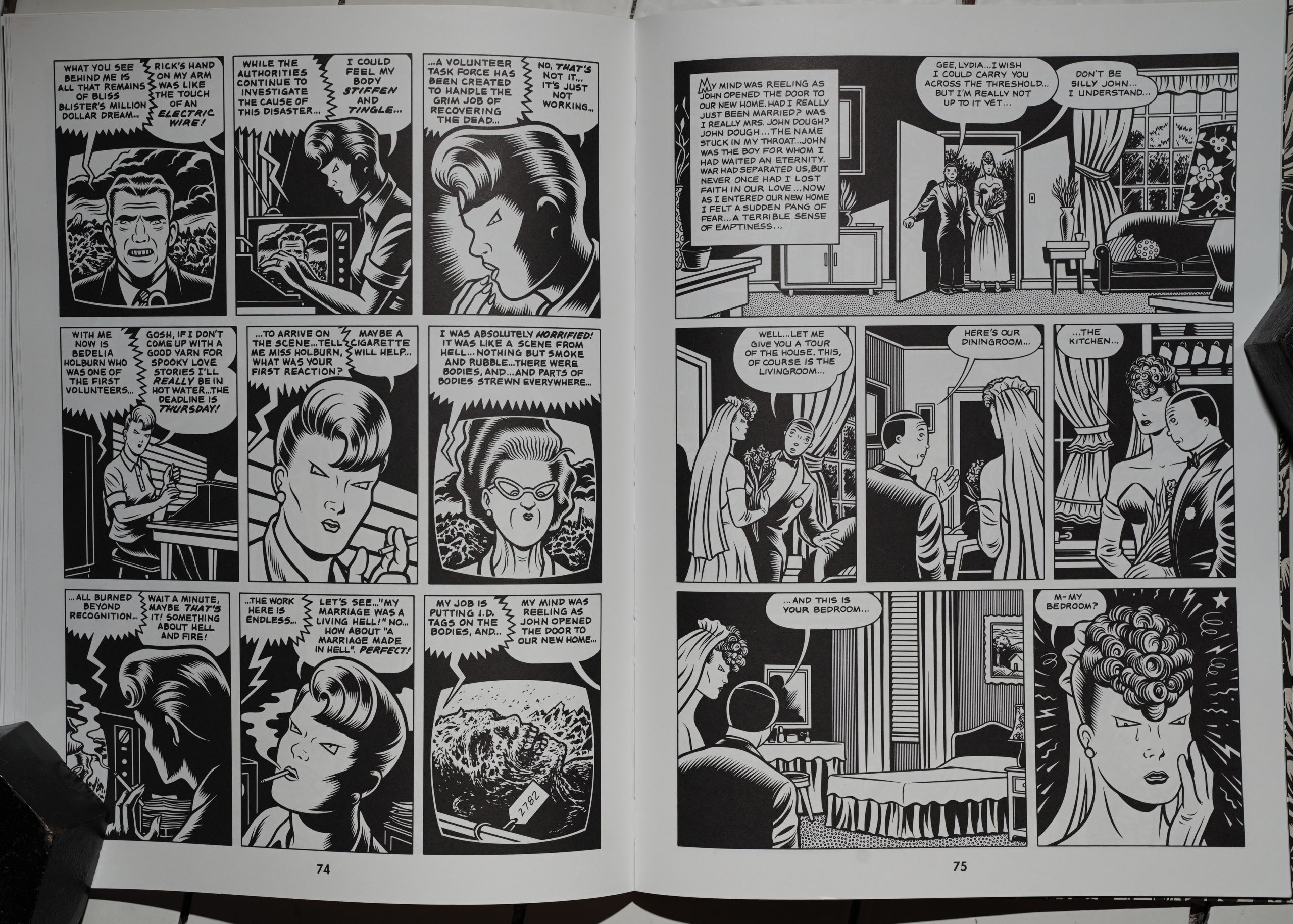 Finally, we get a reprint of the first longer story Burns did in Raw, and it’s still a fun story. But there’s a framing device to tie it into the previous story that’s kinda awkward, and the framing story adds a new ending that changes the meaning of the story somewhat. It’s pretty successful?

But overall, it’s a very strange book — a fixer-upper; making individual stories into a longer story, and that just makes everything even weirder. Which might be a feature, not a bug.

Penguin Books, one Of the few mainstream
American book publishers to print comics al-
bums. has decided to temporarily stop pub-
lishing them, according to Senior Editor David
Stanford. Penguin, which published such books
as From A to Zippy by Bill Griffith, Skin Deep
by Charles Burns, “tarts and All by Drew and
Josh Alan Friedman, Cheap Novelties by Ben
Katchor, and the anthologies Thisted Sisters and
RAW, will publish only tuo more comics col-
lections in 1993. Twisted Sisters II, originally
intended for publication by Penguin, will now
be published elsewhere.
Stanford, who has been with Penguin for
four-and-one-half years, edited the company’s
more avant garde comics projects (previously,
he worked at Henry Holt and Company, where
he edited books by Garry Trudeau, Charles
Schulz, Jeff MacNelly, Skip Morrow and Other
cartoonists). He cited a energy crisis”
as one of the main reasons Penguin is discon-
tinuing the publication Of comics collections,
although modest sales was also a factor.