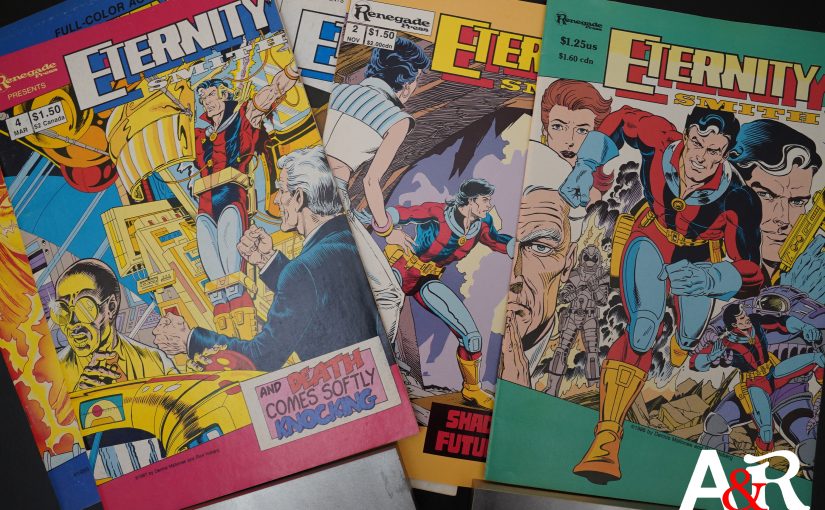 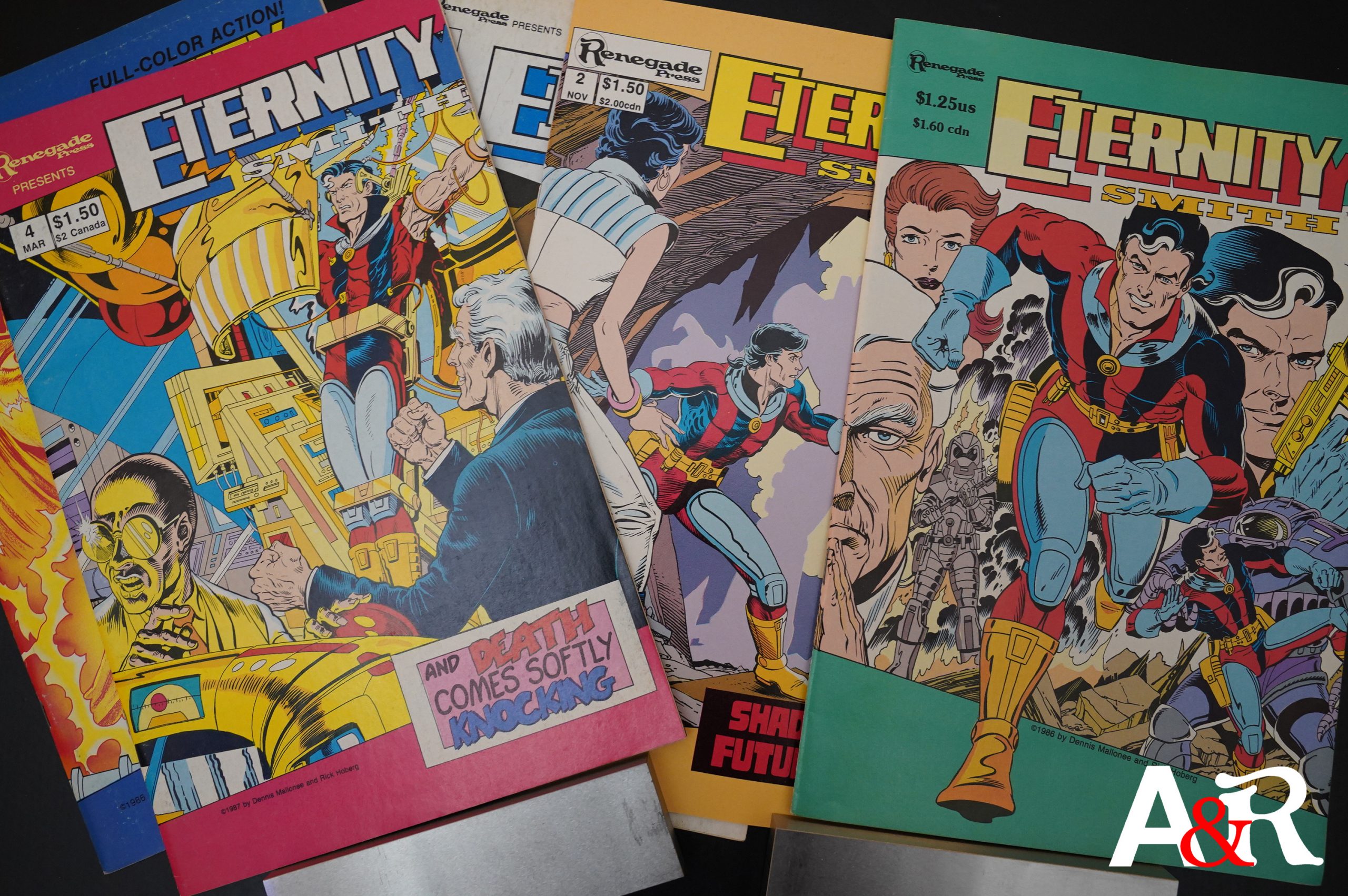 This is Renegade’s first (and I think only) colour book. And it’s a kinda-sorta super-hero book (well, it’s got a guy running around in leotards who has (augmented) powers, so I think it counts).

Both are unusual things for Renegade to be publishing… and it’s also a strange time to be launching a series like this, as it’s in the middle of the Black and White Boom period.

But perhaps things will become clearer after reading the first three pages: 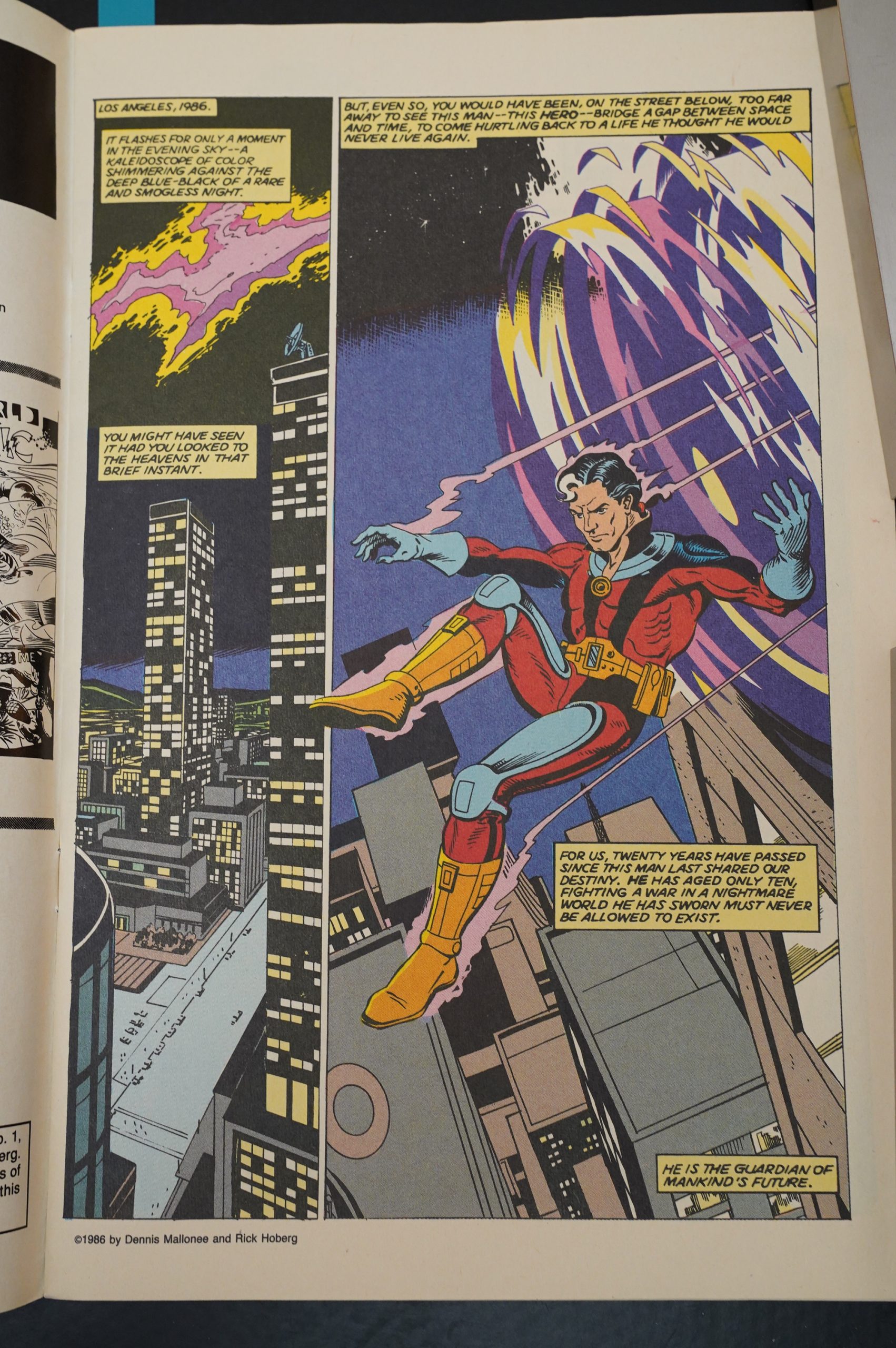 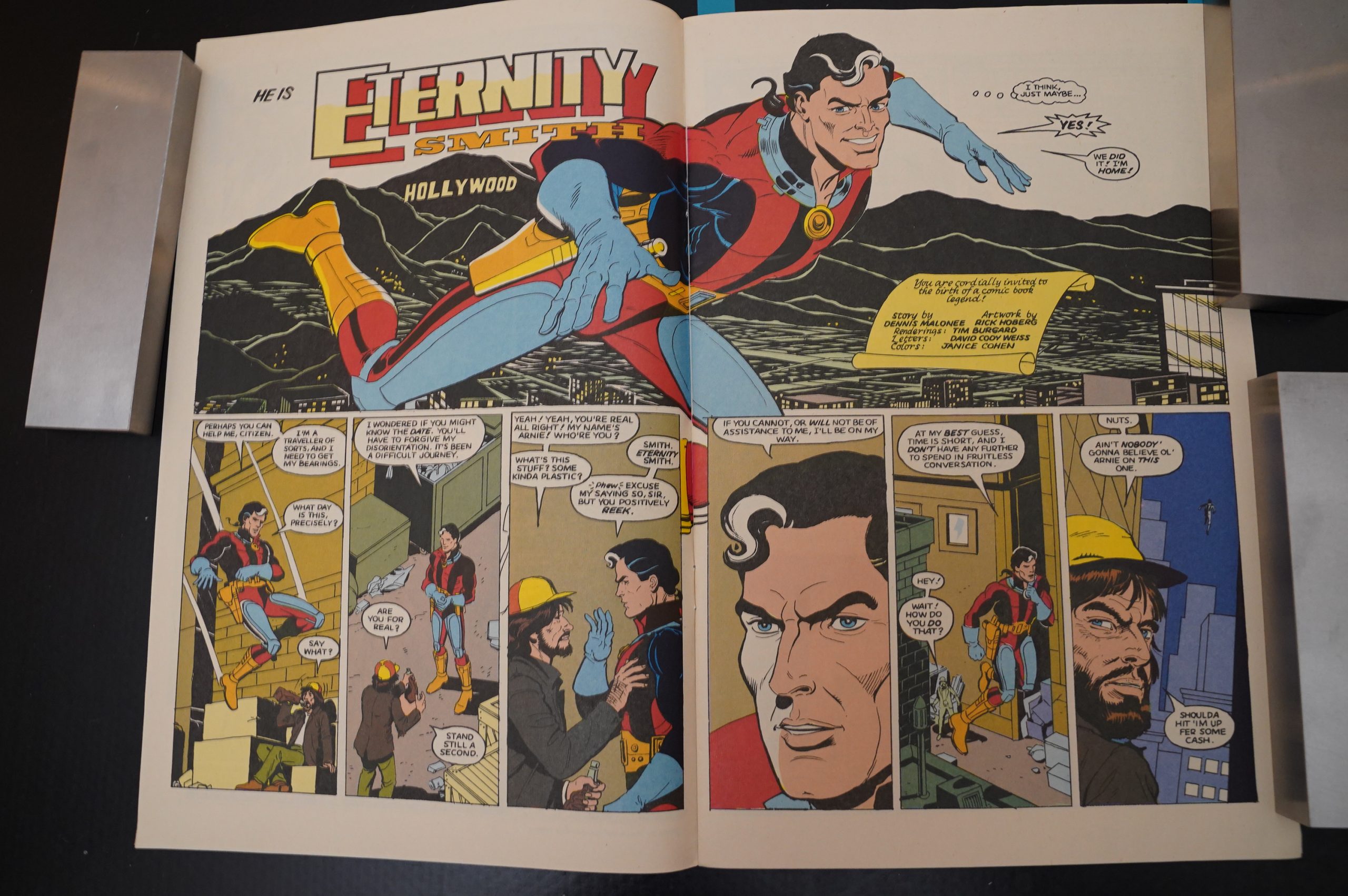 The text seems to hint at this being a continuation of something? Which is seldom a good way to start off a series like this… and it isn’t, I think?

The “artwork” is by Hoberg, but the “rendering” is by Tim Burgard. I guess that’s a roundabout way of saying that Burgard is the inker?

The colours (by Janice Cohen) are competent and professional-looking, but the artwork looks rather basic. 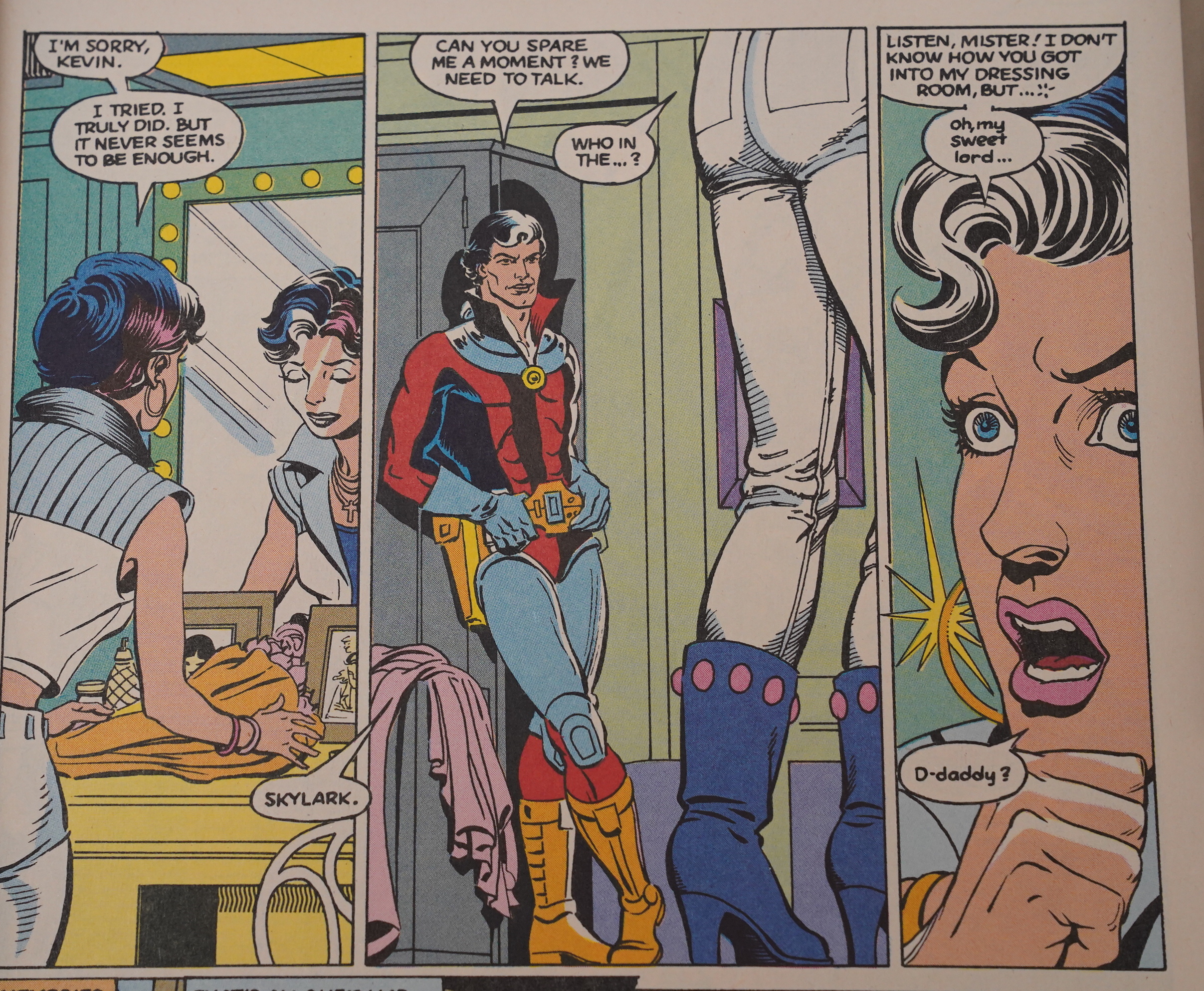 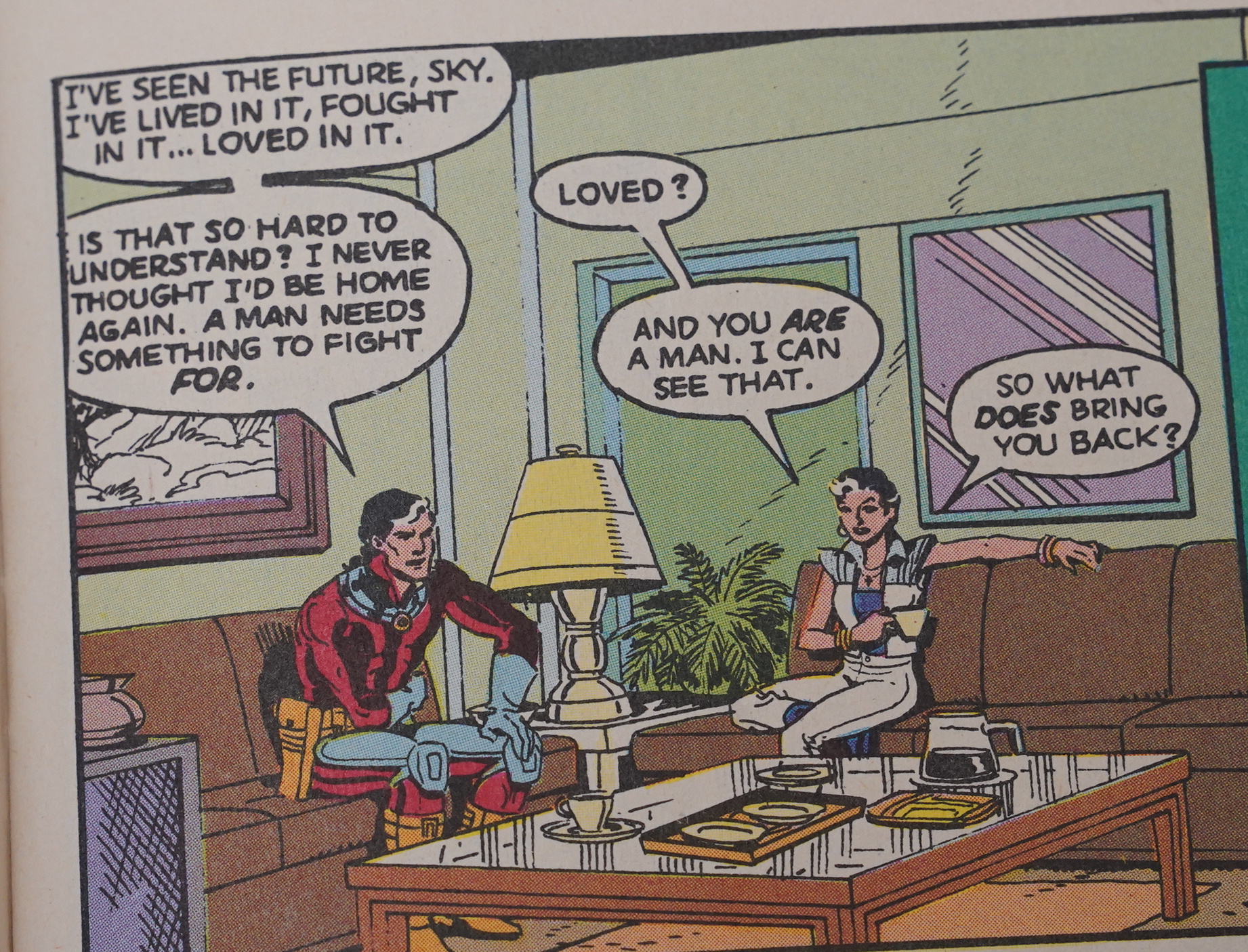 “And you are a man. I can see that.” Is she saying that his leotard is a bit tight in the crotch? I’m just saying that this father/daughter banter is really odd. 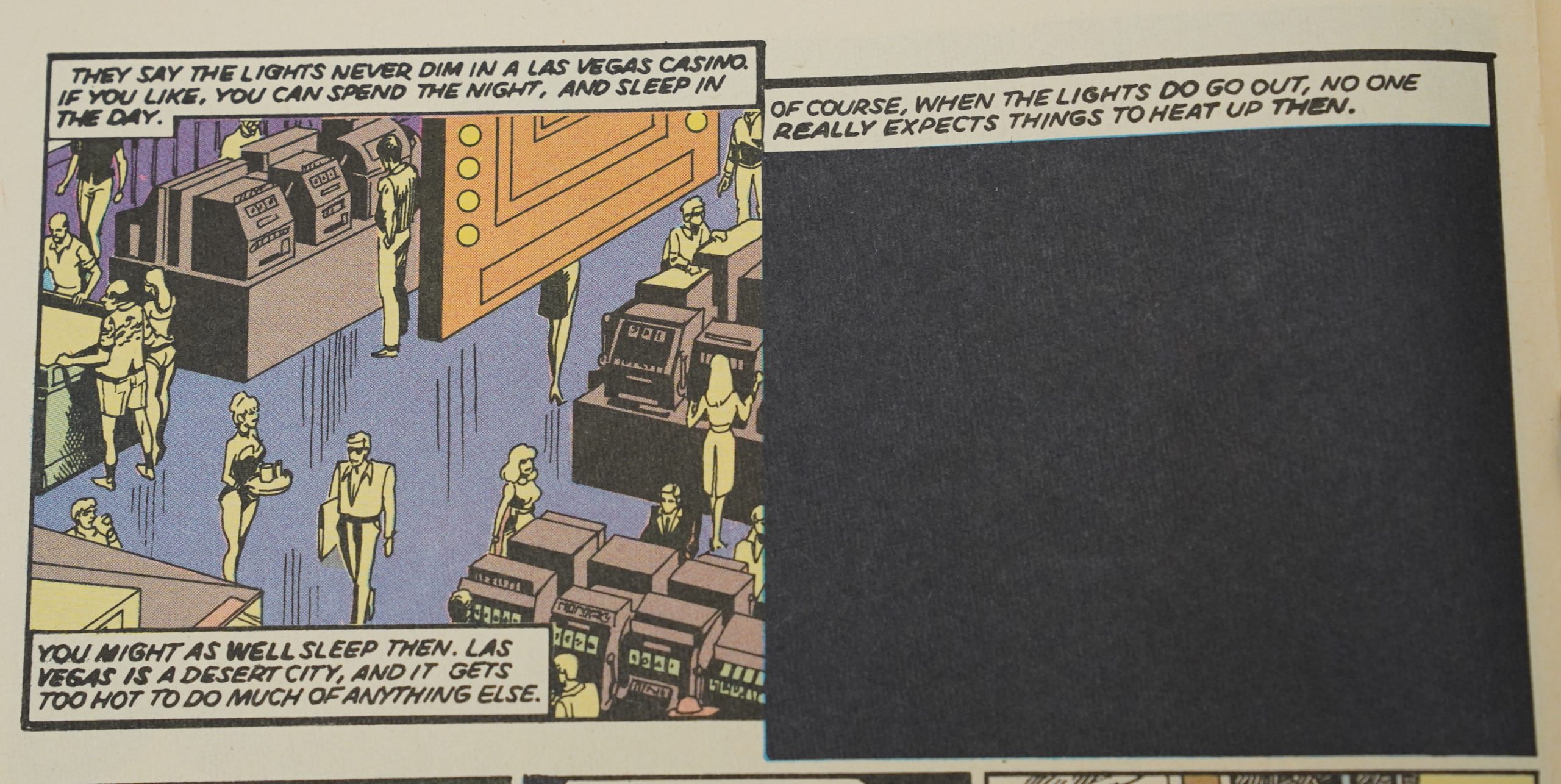 But everything here is odd.

“That woman seems a likely candidate for physical abuse.” I’m with that guy: “What?”

The lines seem like they’re coming from an alternate dimension where everything is weird and awkward. 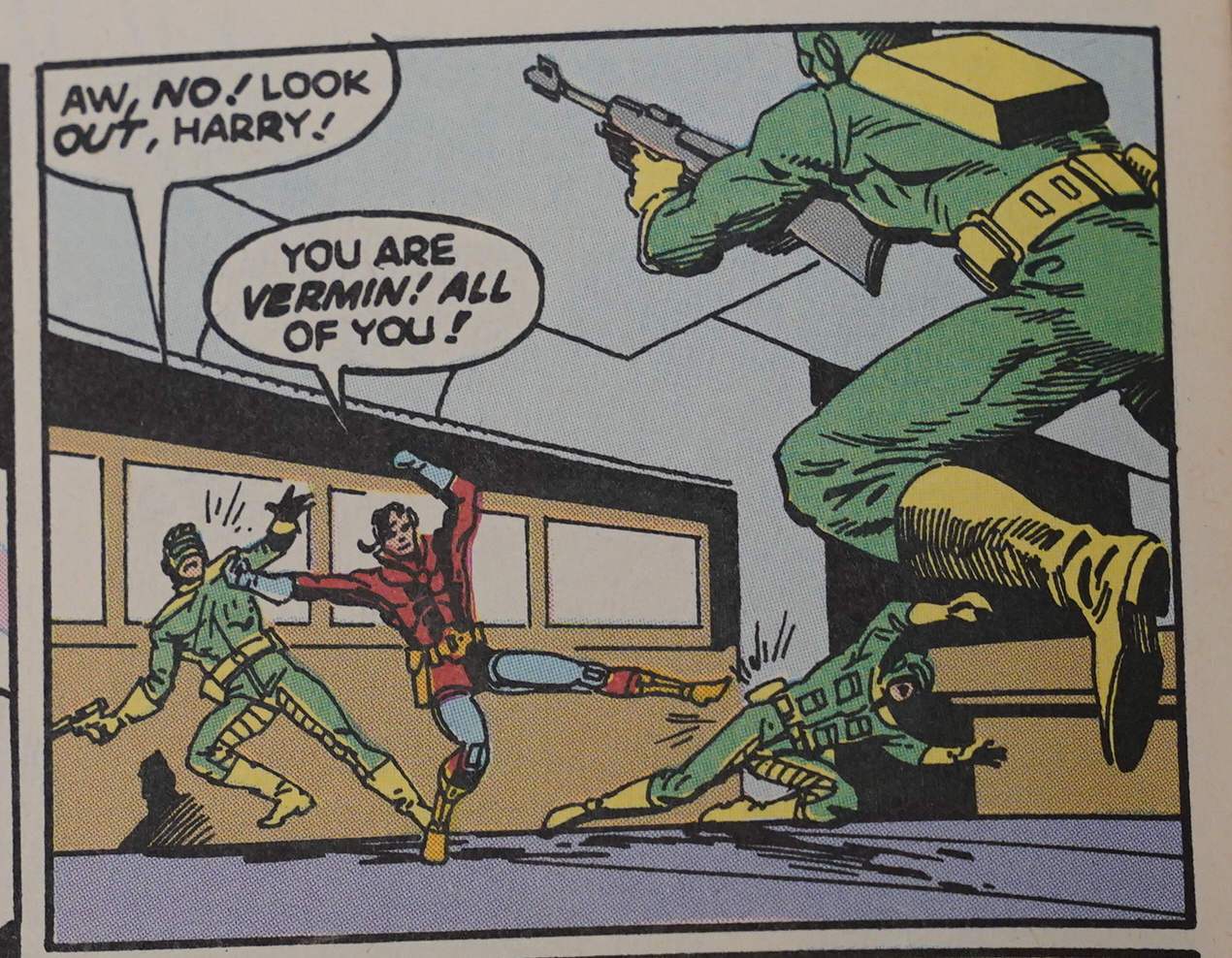 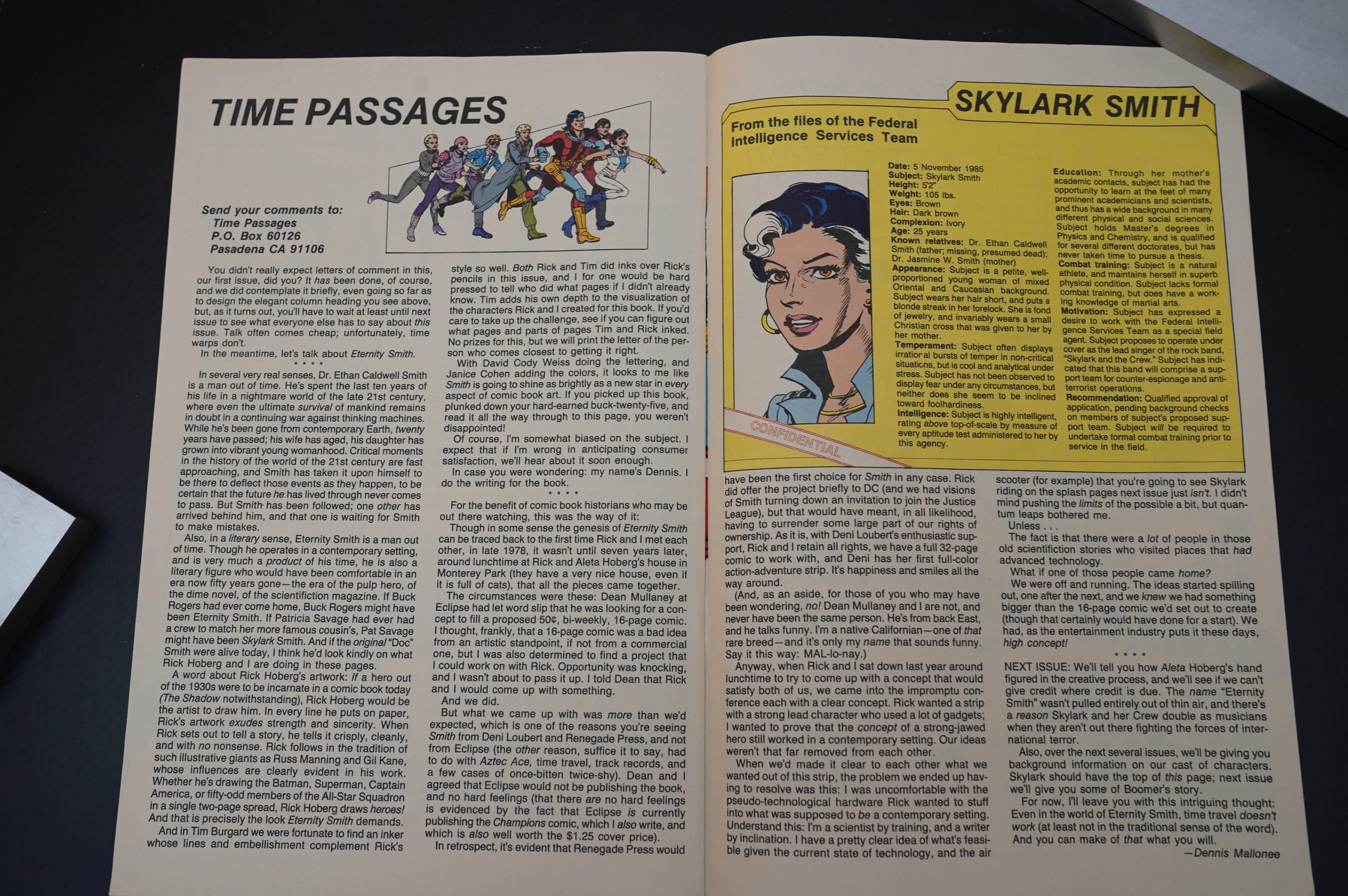 So this series had originally been a pitch to Eclipse Comics, and reading between the lines (you have to use a microscope), I’m guessing Dean Mullaney passed on it? So somehow Deni Loubert ended up with it.

But Eclipse did publish Champions, also written by Malonee, and it sucked. 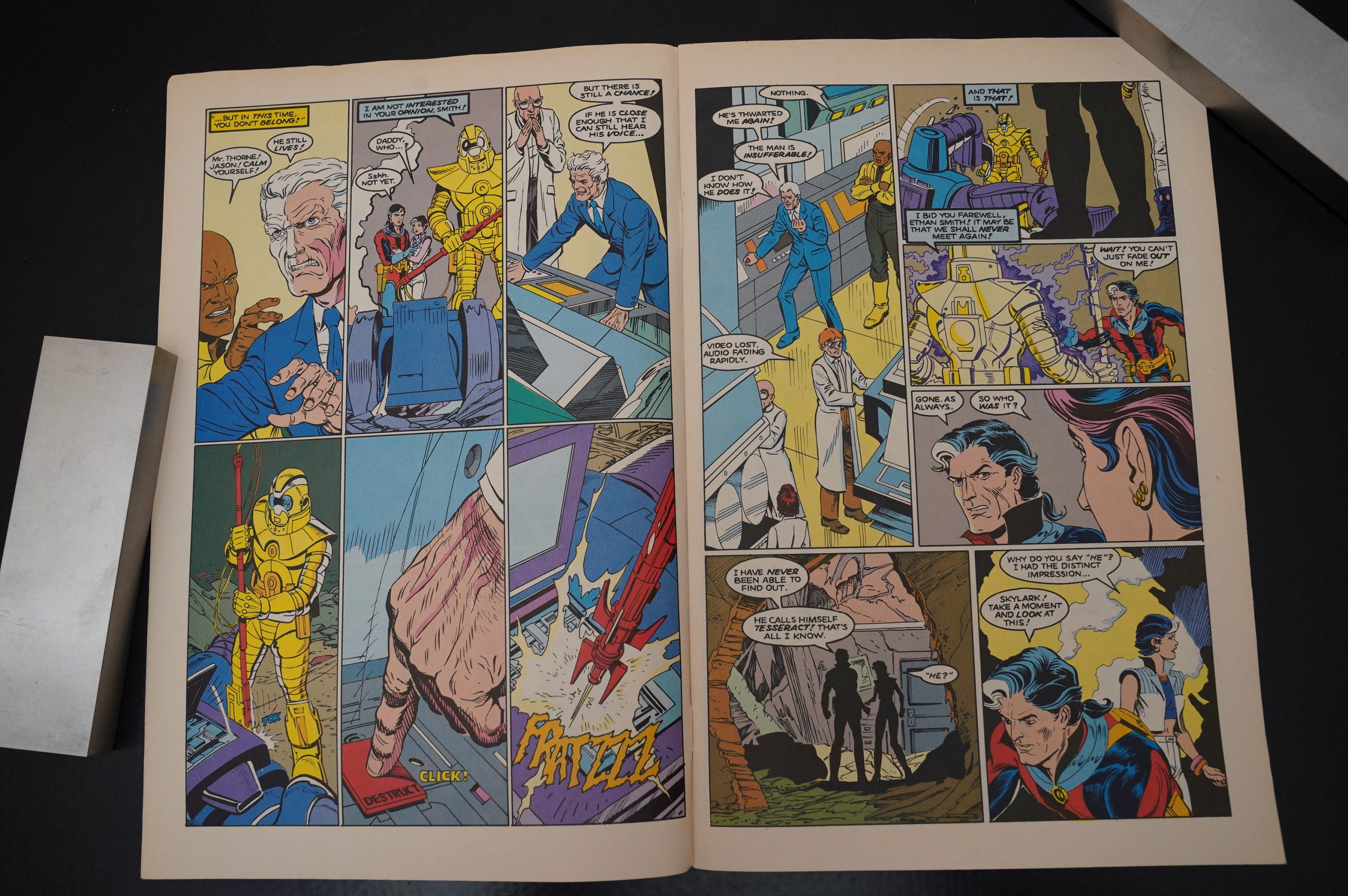 Note to people who want to add a mystery to their books: So we’ve been given that this mysterious Tesseract character is a woman, so it has to be one of the female characters in this book. There are exactly three of them: Smith’s daughter and wife, and the wife of his arch nemesis. So it’s obviously either his wife or his daughter coming from the future to save them. 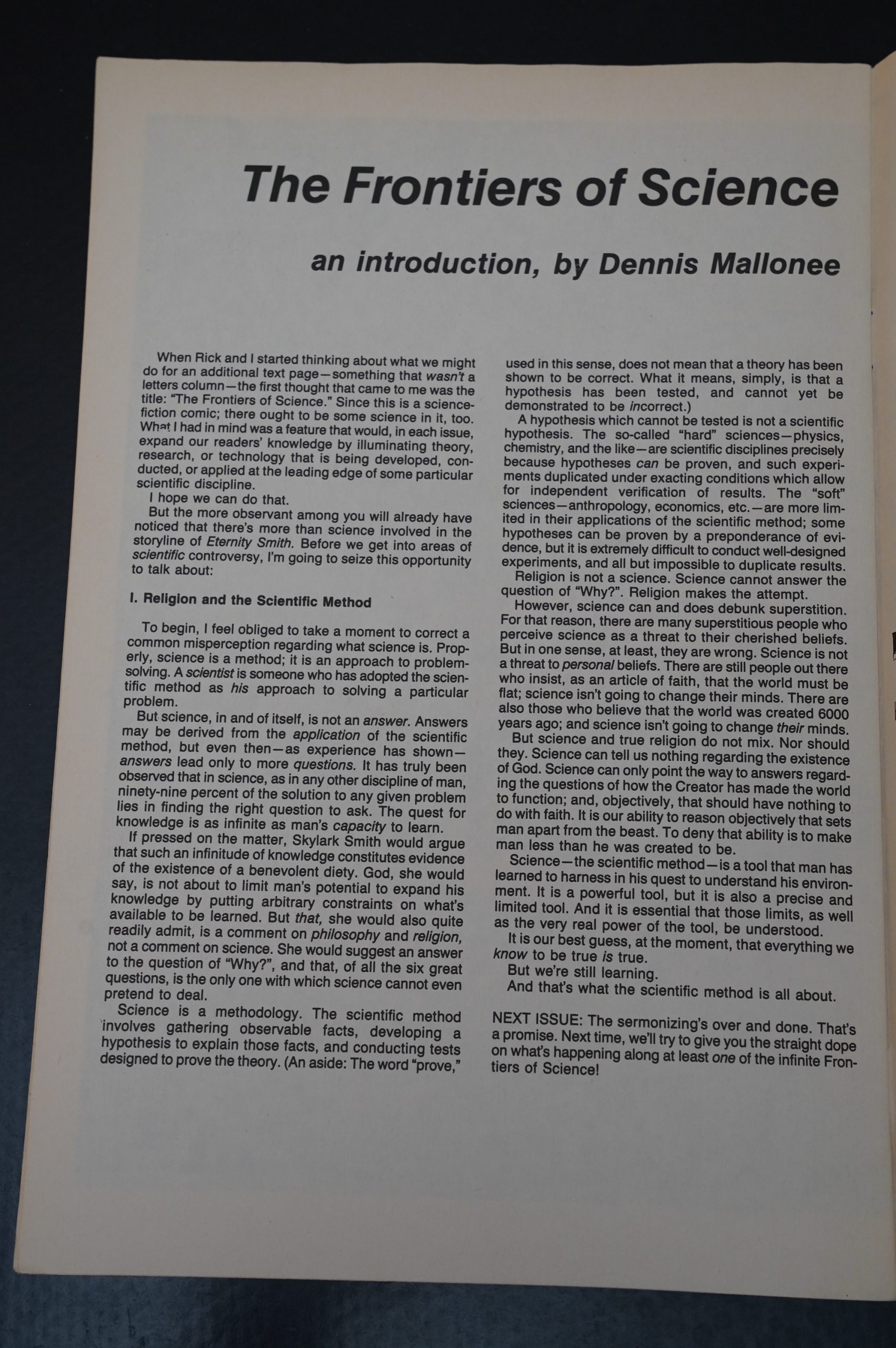 We get a bunch of essays on various sciency things, and they’re not bad. But the first one is kinda milketoastey. 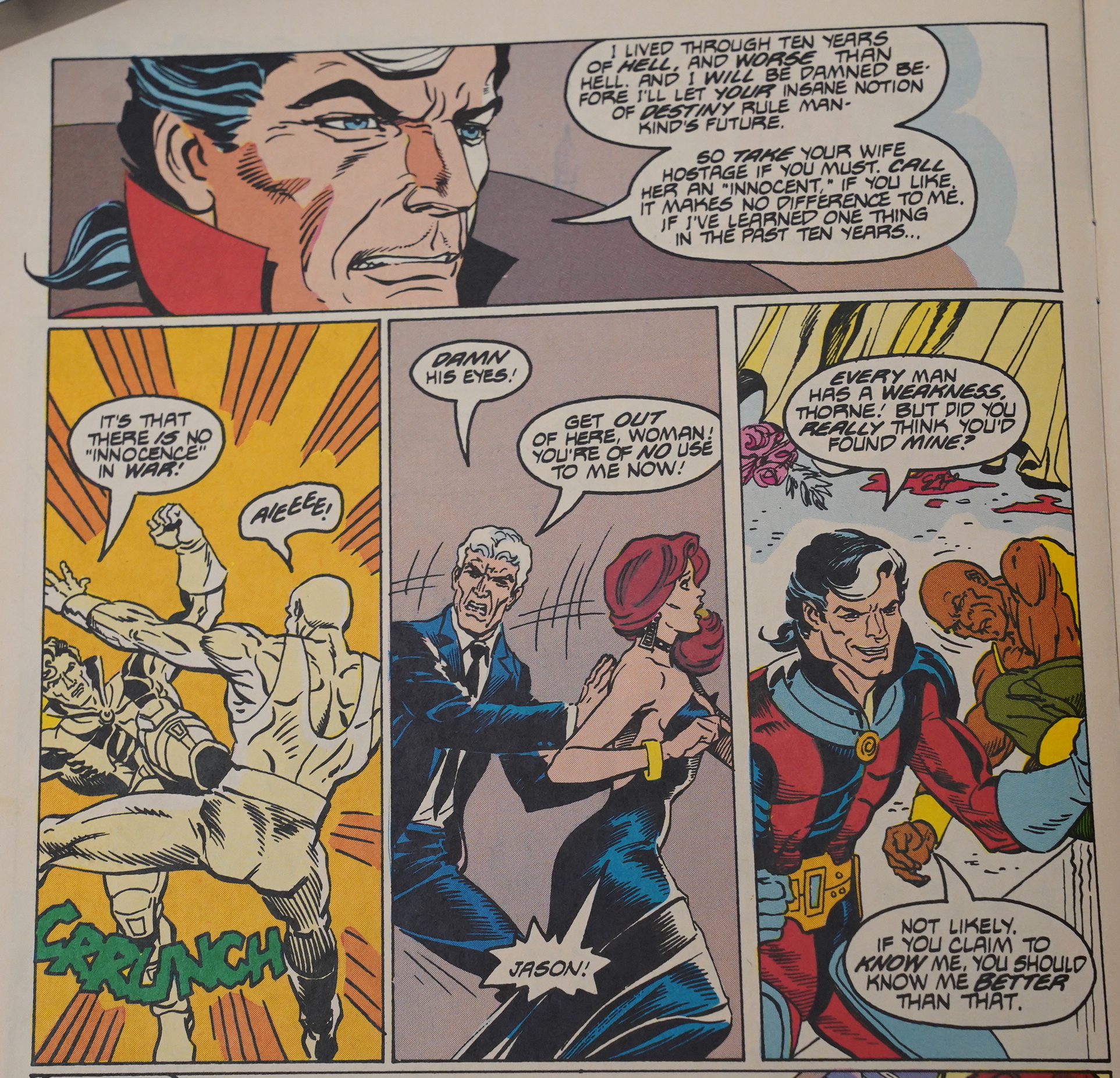 I can’t stress how bizarre this book is enough. So the arch nemesis is using his own wife as a hostage… and then Smith calls his bluff… and the nemesis goes “You’re of use to me now!” to his wife.

Oh, and the black bodyguard is called “Kung”. 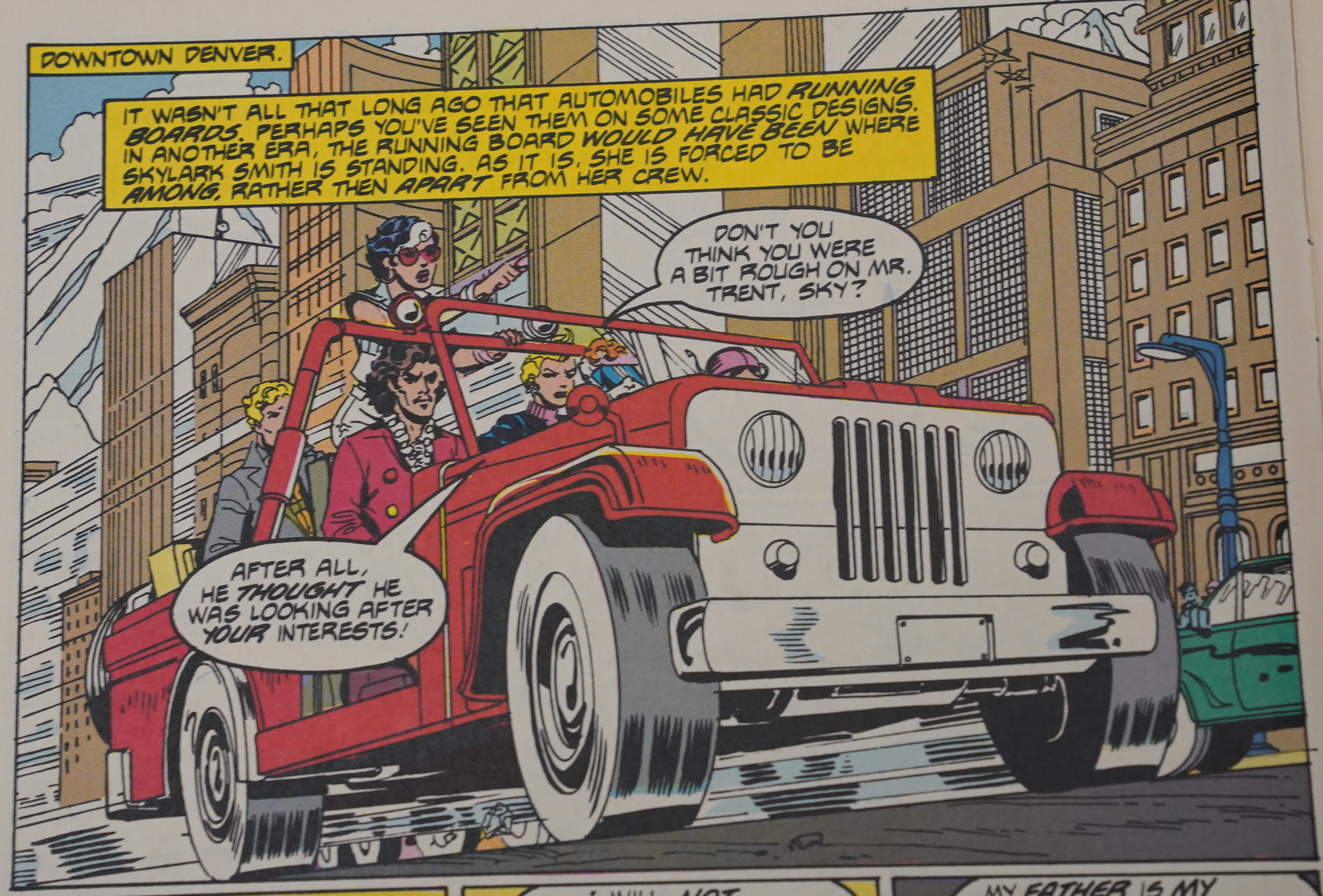 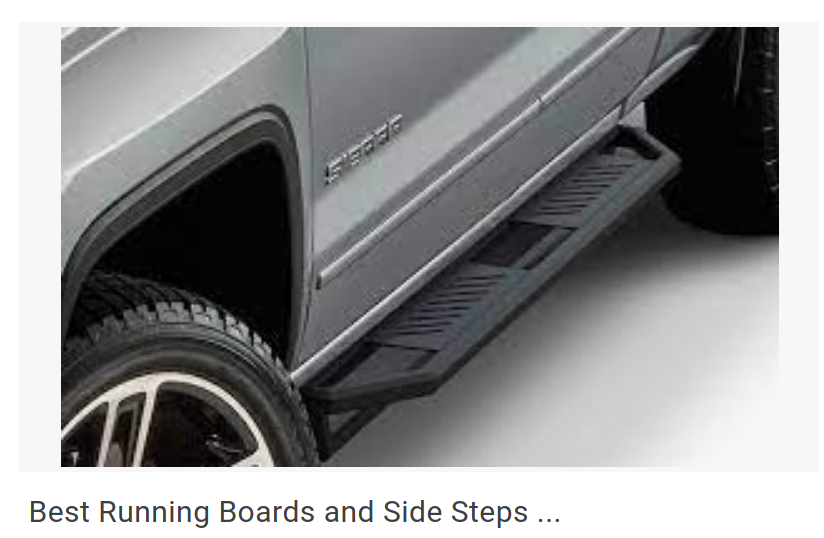 She’s standing in the middle of the seat there, isn’t she? What? What?

… Oh, he’s saying that she would have preferred to stand on the running board instead of “among […] her crew”? 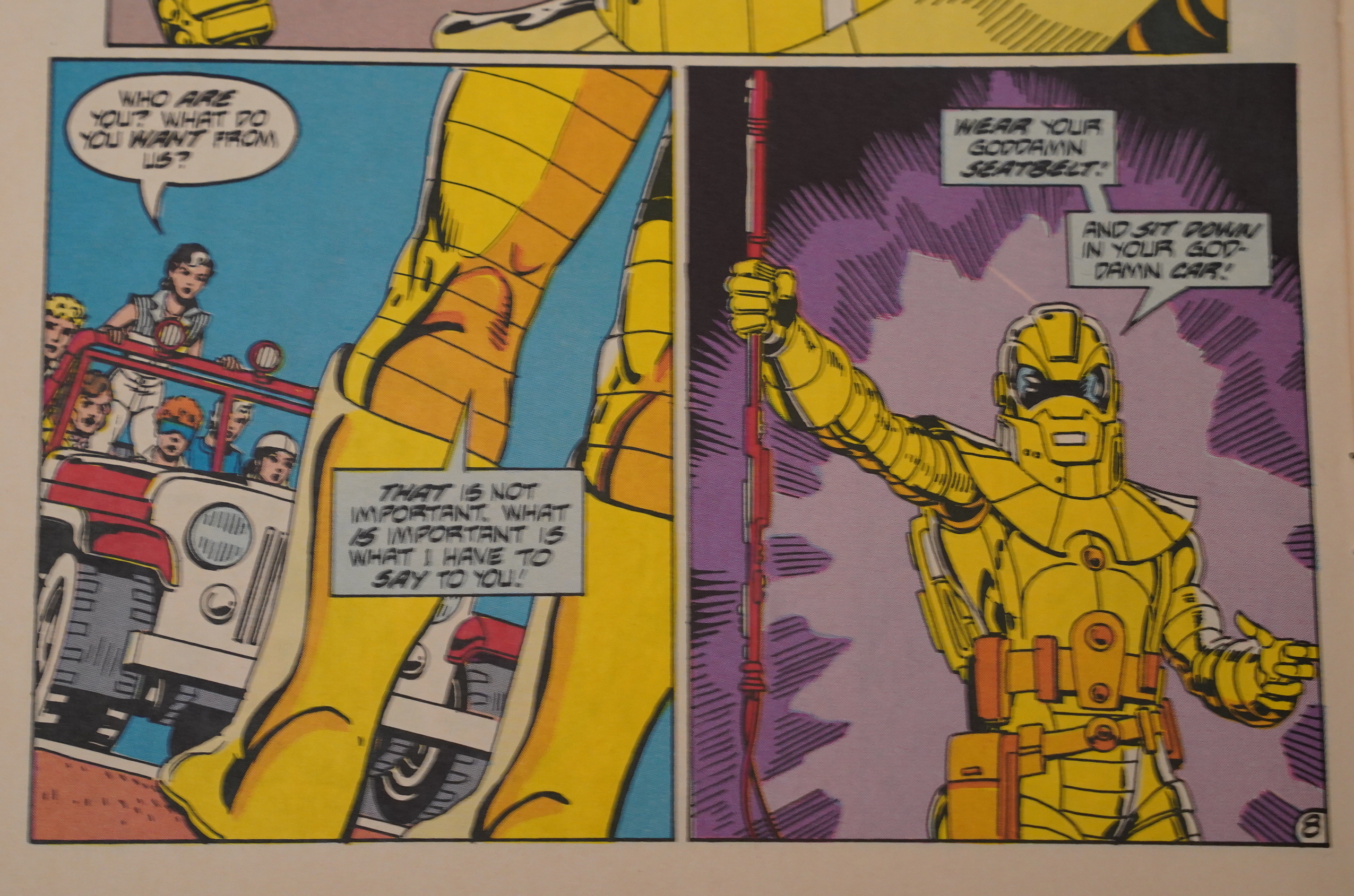 Well, OK, so that’s kinda amusing? But it means that Tesseract has to be the daughter. 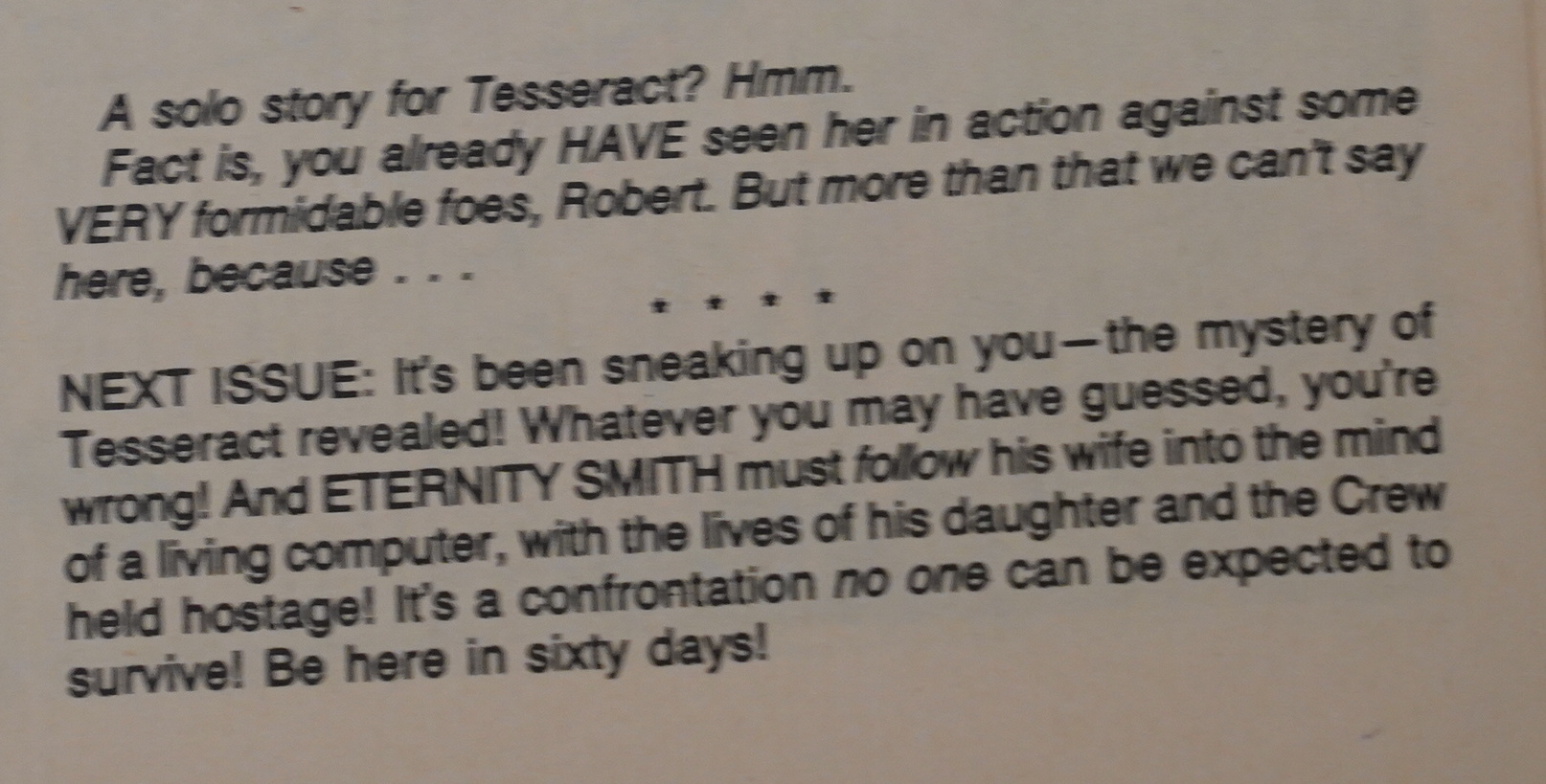 The mystery revealed next issue! 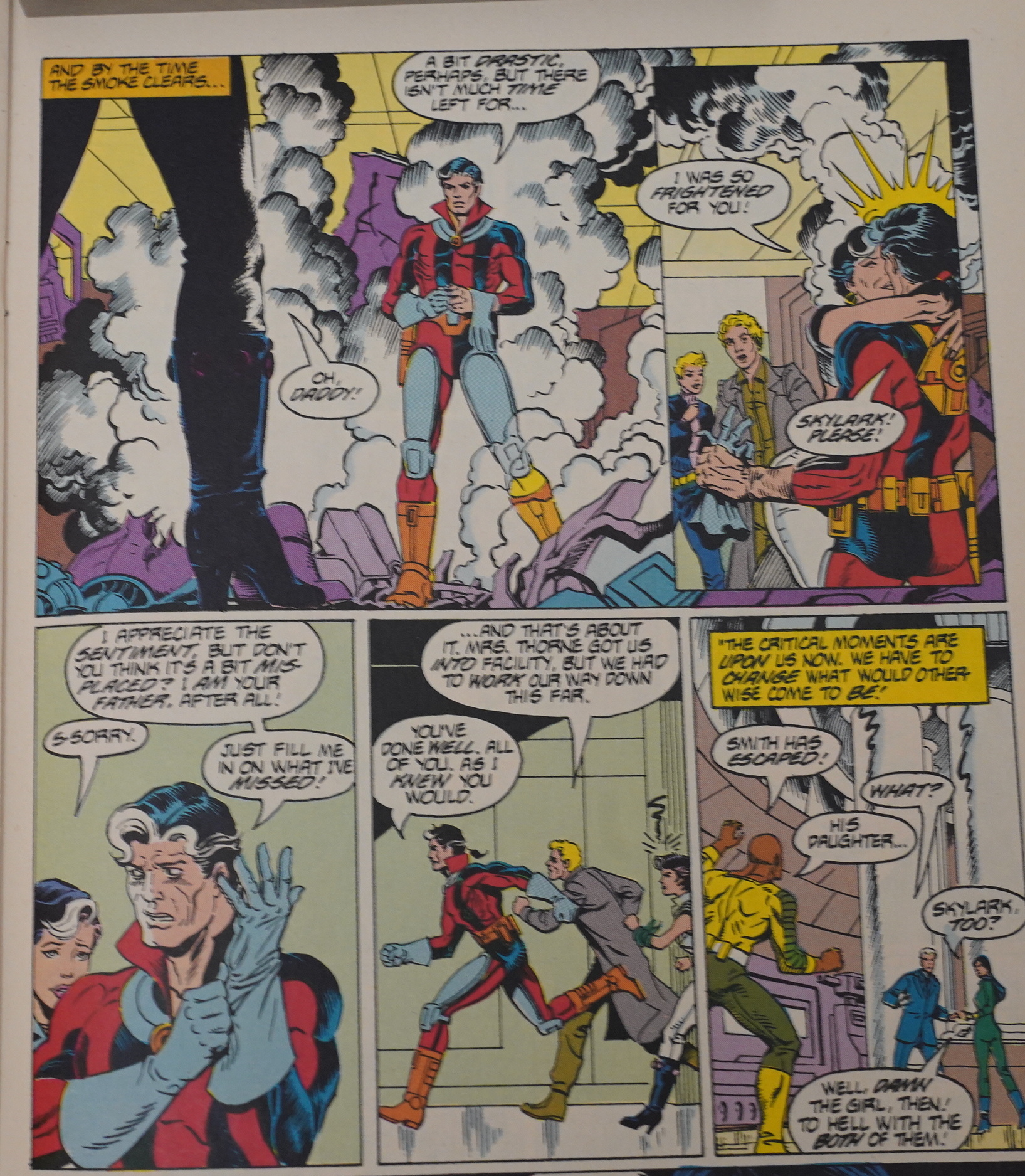 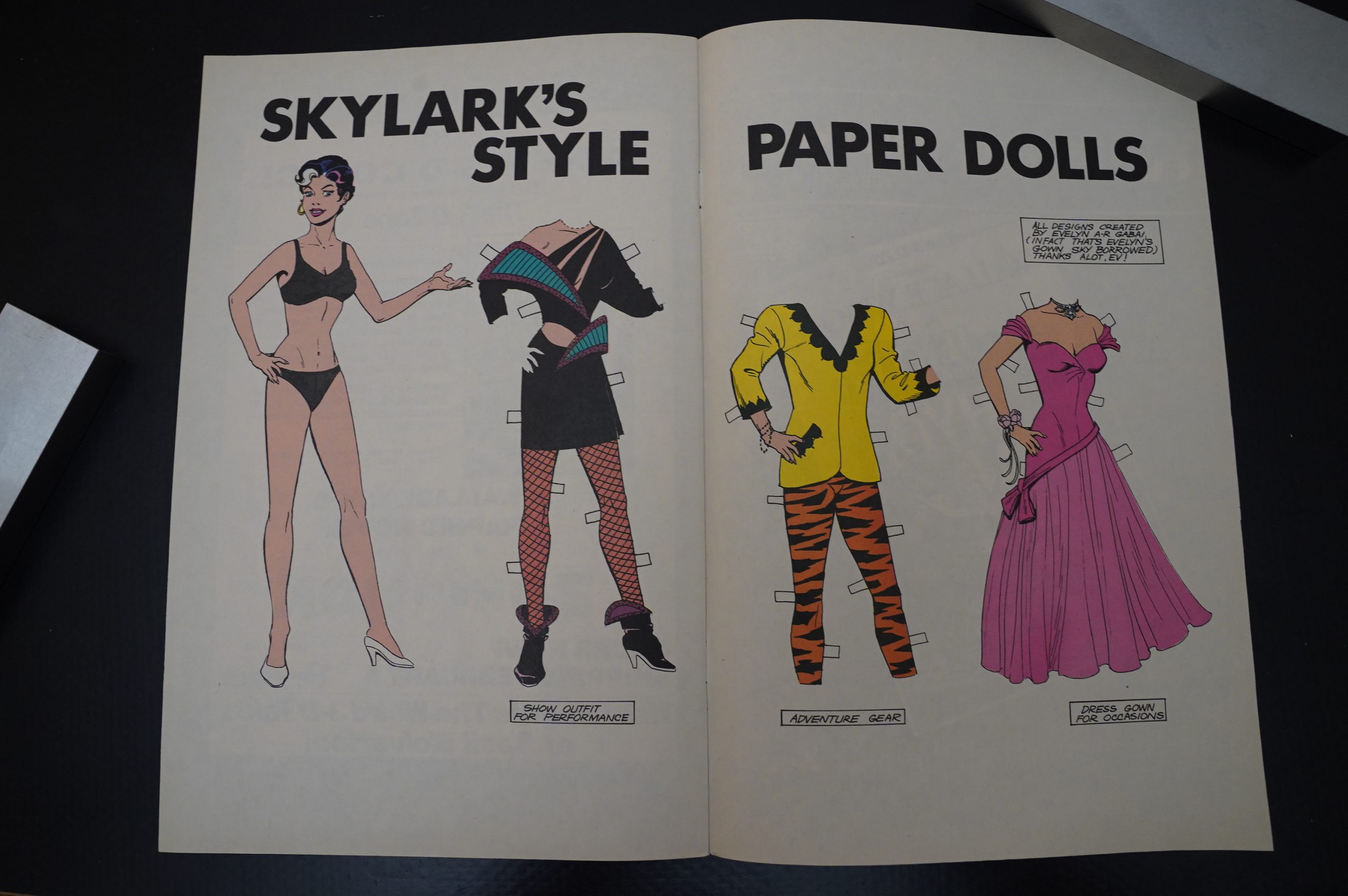 What the fuck is this. A sixth issue is announced, but was never published. But, as you can see, it was meant to be the final issue at Renegade, and then the series would go to a different publisher… which turns out to be Hero Comics. Somehow I’ve bought a couple issues of that (but not the first one, which I surmise finished up the first storyline). This is a blog series about Renegade, but I might as well take a look at the Hero Comics issues I have: 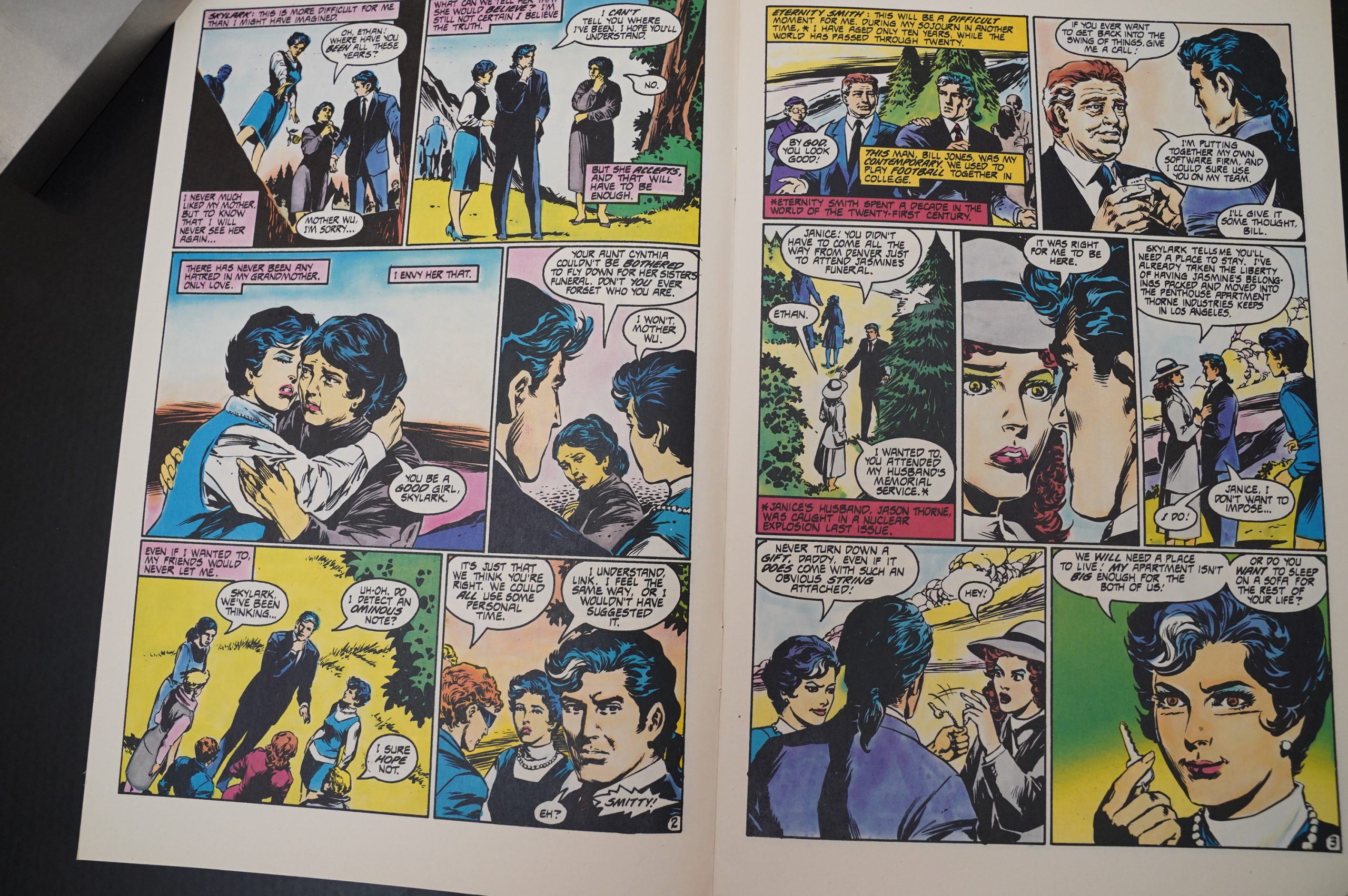 Wow. It looks totally different! Did they swap out everybody?

But no, it’s just a new inker, E. R. Cruz (and a new colourist). It definitely looks like Cruz has redrawn everything, and it’s now in a Spanish lush style. Looks great. They don’t actually fuck, though. Cruz is gone the next issue, so we’re back to the normal barely competent rendering.

So: Eternity Smith is really, really odd, and while it’s not totally without qualities, it’s pretty bad.

Hero Comics published nine issues. It looks like a reprinting was attempted in 2017, but was abandoned after two issues?

According to Hoberg, Eternity Smith
was originally pitched to DC Com-
ics. “I would like to have worked
with them on this, and they said they
wanted to option it, but, after talk-
ing with Deni [Loubert, Renegade
publisher] awhile, we hit it off real
well. We decided to go with Rene-
gade, and now we have total creative
control.”
Hoberg and Mallonee had been
planning to do something together
for many years. “We’ve known each
other for quite a while, and it just
happened that when we got to do
something together last year, which
was an Iron Man story, I found that
we were just terrific together. We’re
an odd couple at best—we have com-
pletely different personalities and
beliefs, but we jell wonderfully on
comics.” They decided that they
wanted to collaborate, and made
time for a brainstorming session that
went outstandingly well.

“The basic genesis for this idea
is one that I’ve been interested in for
quite a while and Dennis likes it too:
What if a character like Buck Rogers
came back to his own time and had
to pick up his old life?”

Eternity Smith is one of those books
that goes in cycles. It started out as
a well put-together project, nicely
written and nicely drawn, with a
fascinating» concept behind it. The
first six issue run, readers were never
sure when (or if) an issue was going
to come out, from what company, and
whether the quality was going to stay
consistent. By the time the sixth part
came out, finishing off the first story,
I had lost interest, and couldn’t
remember what was going on.

This issue Tesseract, who may or
may not be the incarnation of Skylark
Smith (Ethan’s daughter) in the
future, returns to the past, seemingly
intent on killing her father. To make
matters worse, Skylark herself seems
intent on committing incest with
daddy, who is only slightly older than
she is!

The scripting of the issue is fairly
tight, although the dialogue tends to
be a little stilted at times. Perhaps
what is most bothersome about the
book is the incestuous nature of
Skylark Smith. This issue she sings
a specially written love song to her
father, while caressing his chest.
Everyone is unnerved (rightfully so),
and I got a sense of deja vu of the
Champions. Mallonee acknowledges
sexuality in his world (something
most writers and companies won’t),
but doesn’t anyone in his world have
a normal, healthy sexual relationship?
The art is weak in places, although
functional as a whole. Burgard and
McClellan do seem to have a problem
with facial structure that could be
worked on. Their anatomy and
scenery are fine, but their faces are
a little distorted at times, and Archie-
like at others.

I admit that this isn’t the sort of book that
appeals to me much, even when really well
done. But this book is so flat, predictable,
and ordinary that even if it were an example
of the sort of book I loved, I wouldn’t like
it. For one thing, Skylark Smith is ridicu-
lous. She is supposed to be the leader of
some sort of all-purpose assault squad. As
a cover, they book themselves into clubs as
a pop music group. Great idea. Undercover
agent, seeking anonymity, becomes pop star.
I suppose it could be played for comedy,
with the crack team of agents working as
a sleazy, incompetent lounge act, but Eter-
nity Smith is the kind of kiddie book where
the heroine has to be absolutery great at
everything, so we get to have her touchy-
feely song lyrics quoted to us at length, and
we get pictures of people in the audience
having movements in their souls, and pic-
tures of Skylark, mike in hand, as • ‘she
glories in the raw emotion Of the song…
and, once on stage, she loses herself in it,
and in the adulation of the throng.” If
you’ve always wished you could leally buy
all of the Dazzler’s records, or if the idea of
Sheena Easton finishing up a set and dash.
ing off to thwart nuclear terrorists sounds
plausible to you, then this might be just
your cup of weewee.

As for the art, those of you who just can’t
get enough of Rich Buckler will be thriled
to know Rick Hoberg’s still working. Actu-
ally, Hoberg has his virtues. He presents the
essential action in each panel cleanly and
clearly, and he varies the angle and point
of view from panel to panel with admirable
fluidity. But his drawing and composition
have the familia’r cheerful blandness of the
modern hero book. It’s not bad work, and
it certainly isn’t amateurish, but it’s sterile
and it’s tame, adjectives I would never
dream Of applying to a Kirby or a Ditka.
It has no personality beyond the chipper
efficiency of the mid ’80s costumed adven-
ture book, available at newsstands every-
where.
But isn’t that what’s intended? I get the
feeling this book turned out exactly as Rene
gade wanted it to. Eternity Smith is a totally
commercial product born of the coldest
calculation. Look, the Renegade people
have ambitions too. like to own
houses, nice cars, take swank vacations.
Why should they be content to squat in the
9mall press ghetto, sending out little stacks
of quirky books, to an audience that may
or may not be there? We are living in the
haveit.all ’80s. Let ’em get a little fun out
of life.

I was unable to find anybody on the interwebs that discussed Eternity Smith.