Yesterday I was delving into the wonderful world of crowd-sourced subtitles, and I was wondering whether TV translations are easy to do.

I downloaded the Emacs/mpv-based subed mode and got started.

And then stopped immediately, because the mode is really geared towards editing srt files, not writing brand-new ones. You can write new ones, but there’s really no workflow offered by that mode that makes it pleasant.

However! While Youtube doesn’t offer to auto-subtitle Swedish programmes, it does offer to mark out sections of the programme that has speech in it. (I guess they do it with elves. Or AI.) So I went to one of the Bergman things, Trädmålning (which is basically a quite different take on the same material that went into making The Seventh Seal), said “I want to subtitle this”, and it made an empty scaffolding, marking out all parts that have dialogue.

And then I went to a service that offers to download .srt files from Youtube (because it doesn’t seem like Google offers this capability itself), and then I had an empty .srt file!

(We got this instead of flying cars. People in the 50s would have been so disappointed in this stupid future timeline.)

So then I could start subtitling in Emacs. 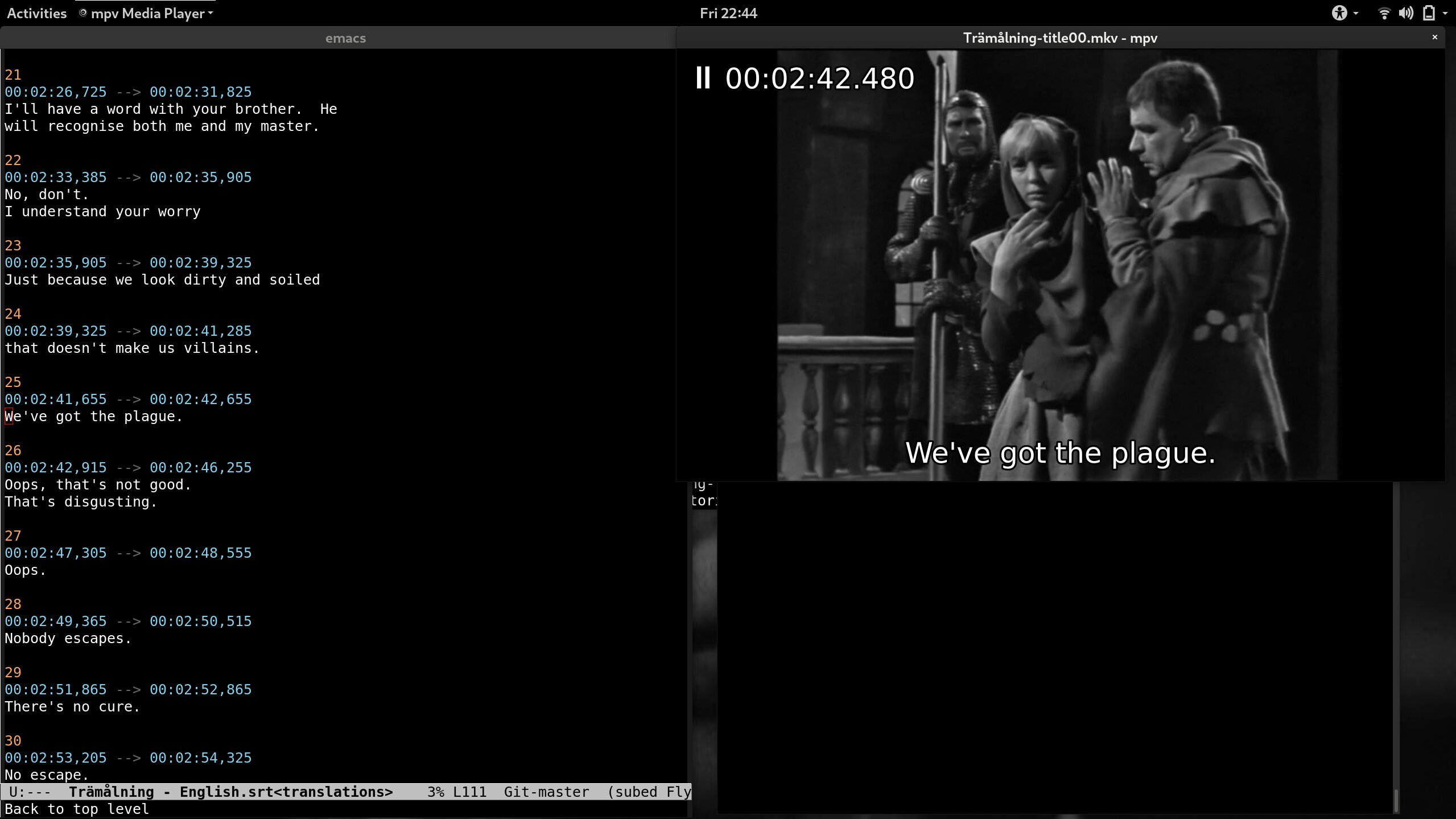 It’s kinda nifty. When you move around in the Emacs buffer, mpv automatically synchronises to the place where you are, and plays that bit in a loop.

However, it’s really grating to listen to the same thing in a loop, even if it pauses the loop while you’re typing. So there’s a lot of hitting the `M-SPC’ key to auto un/pause involved. And the mode lacks some commands (for smashing consecutive too-fast titles together into one, slower, longer ones) that I was writing while doing this, so doing this one 50 minute play took me… what… five hours?

It’s strange how tiresome it is to do translations. My mind just isn’t up to it: I’ll be looking for even the simplest words for the longest time. “Oh, what’s the word for the thing on a branch… a thin branch… er… uhm… Twig! That’s it! Twig!” Repeat for all the words. Writing in a specific language is one thing, but listening to one and writing in another makes mah branes hurt. So there’s a huge number of er awkward word choices in the translation.

I put the .srt file up at Microsoft Github, and if you want to correct anything, use the Youtube interface. Or send a pull request.

The result is on Youtube. It’s a pretty good play! Very Bergman: Funny and emotionally draining at the same time.

Trigger warning: Some religious stuff may be encountered during the watching of this play.

One thought on “Translations are Hard”