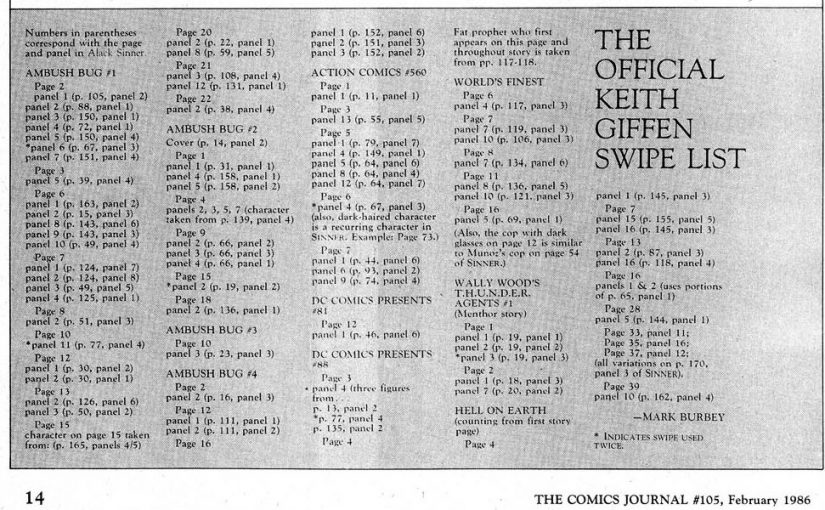 I finally read the second volume in IDW/Eurocomics brilliant reprinting of the Sinner series by José Muñoz and Carlos Sampayo. It was was published about a year ago, but I somehow missed it.

One of the shorter pieces in the book, Over Some Drawings, seems to call out for more attention than it got. I thought surely the twitters and the blogs had to be all er atwitter about this story, but I googled and the only mention I could find was on a Swedish language blog. 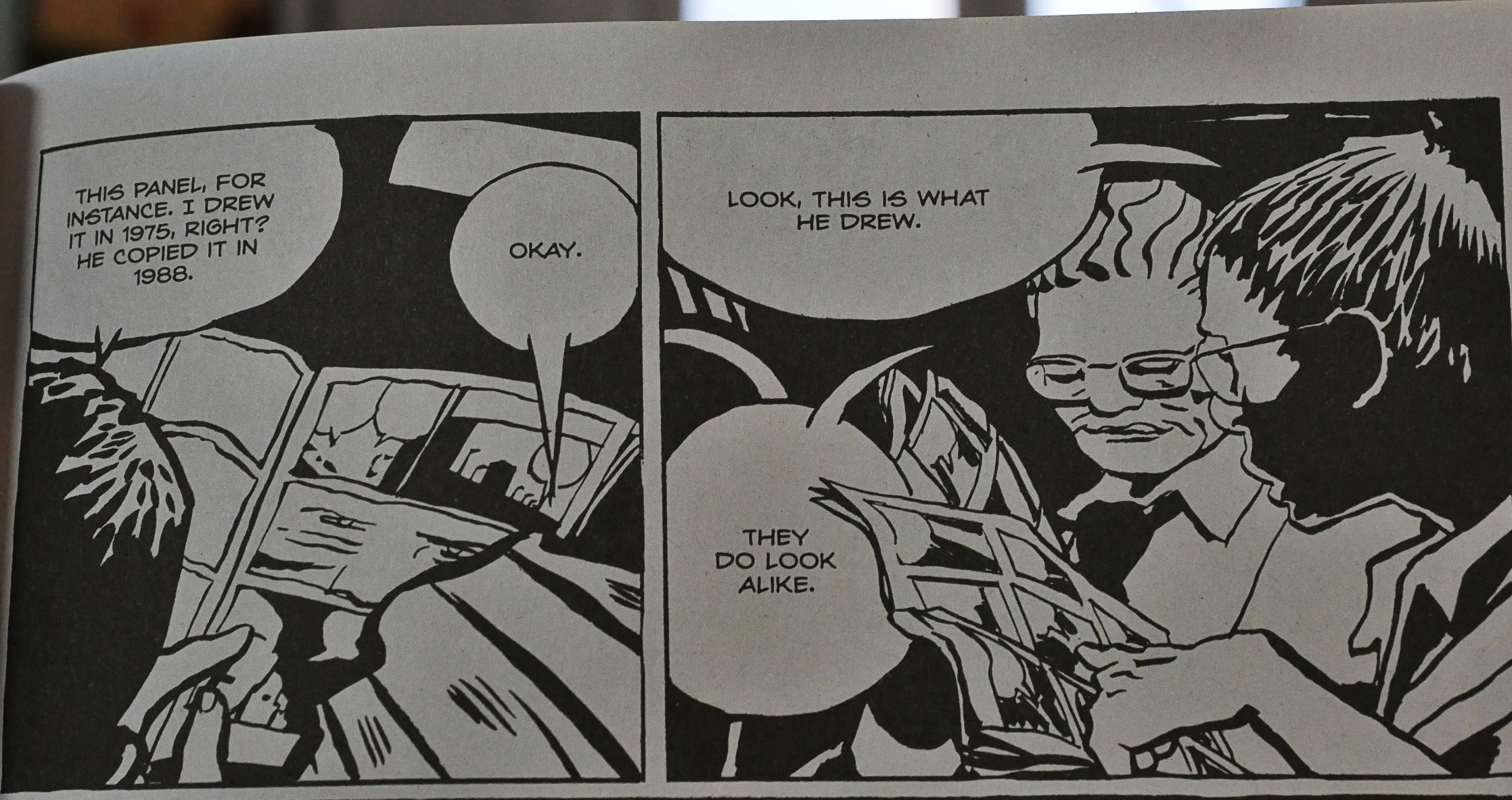 So he’s travelling to meet up with him… 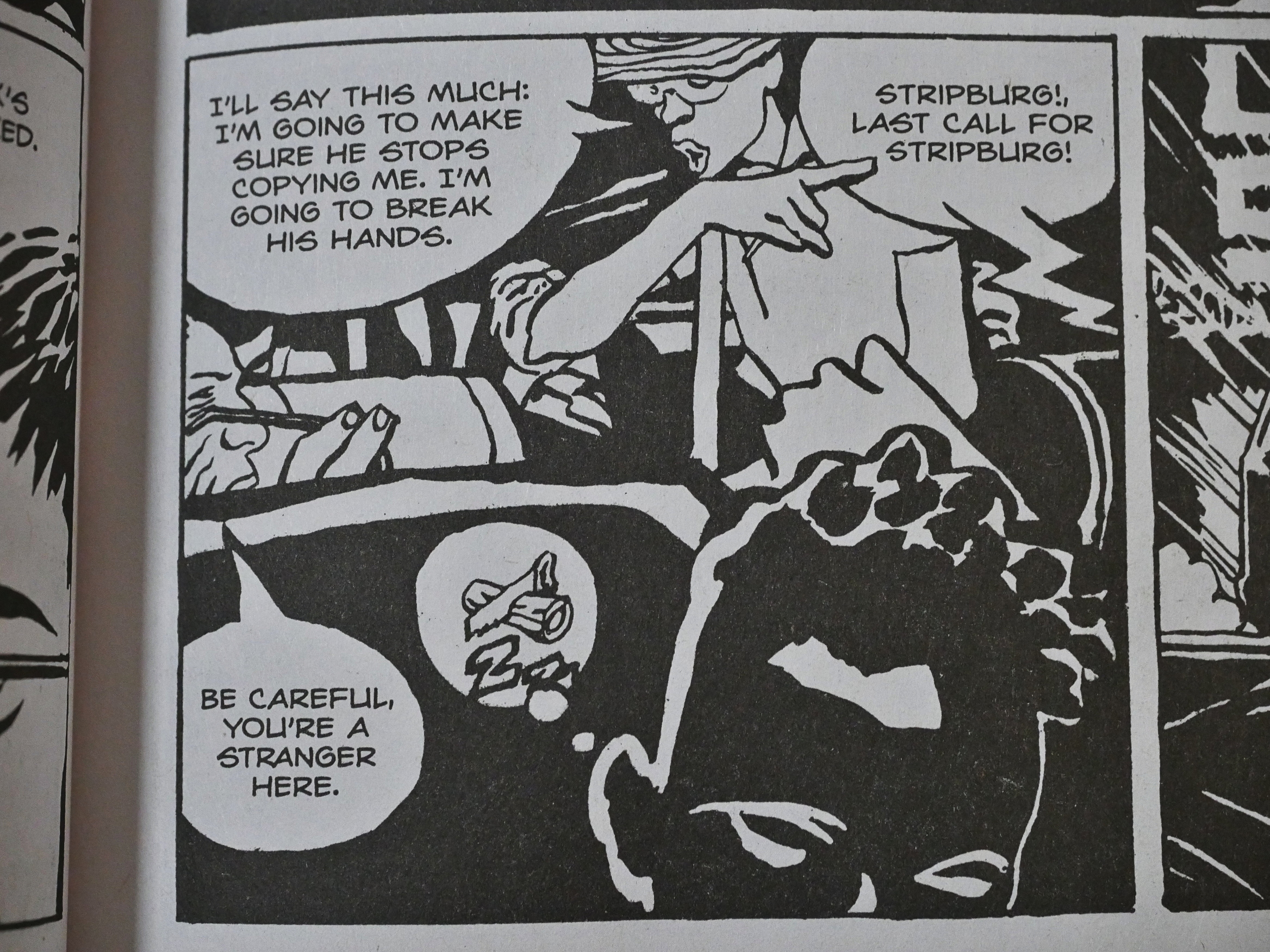 … and break his hands.

This is interesting beyond the story itself because the plagiarism thing is true: A super-hero comic book artist called Keith Giffen spent several years in the 80s bewildering his fans by drawing in an exiting, fresh style that seemed to come out of nowhere. And then The Comics Journal did an exposé and demonstrated that Giffen’s panels were swipes, line by line, from José Muñoz’ panels. 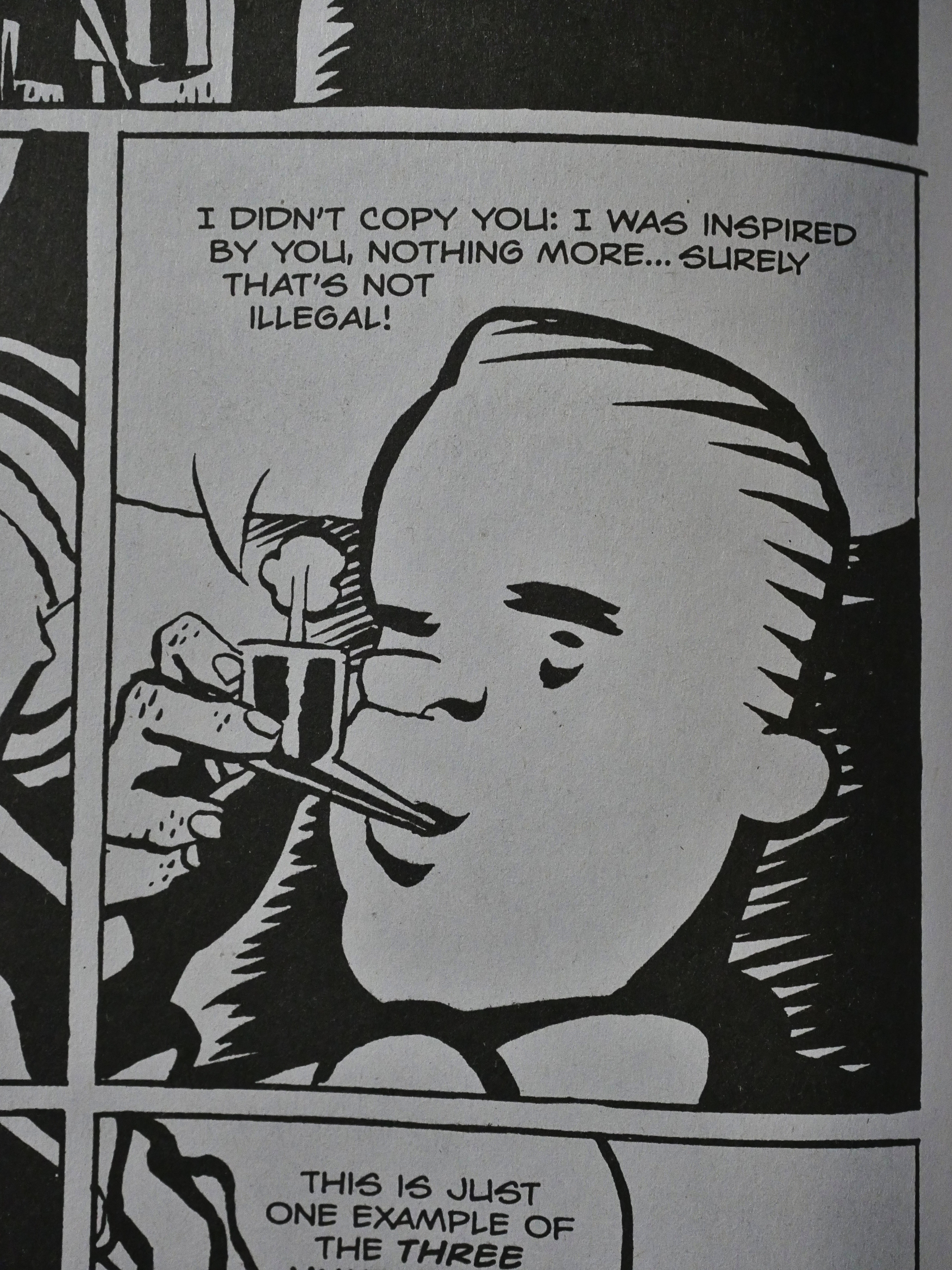 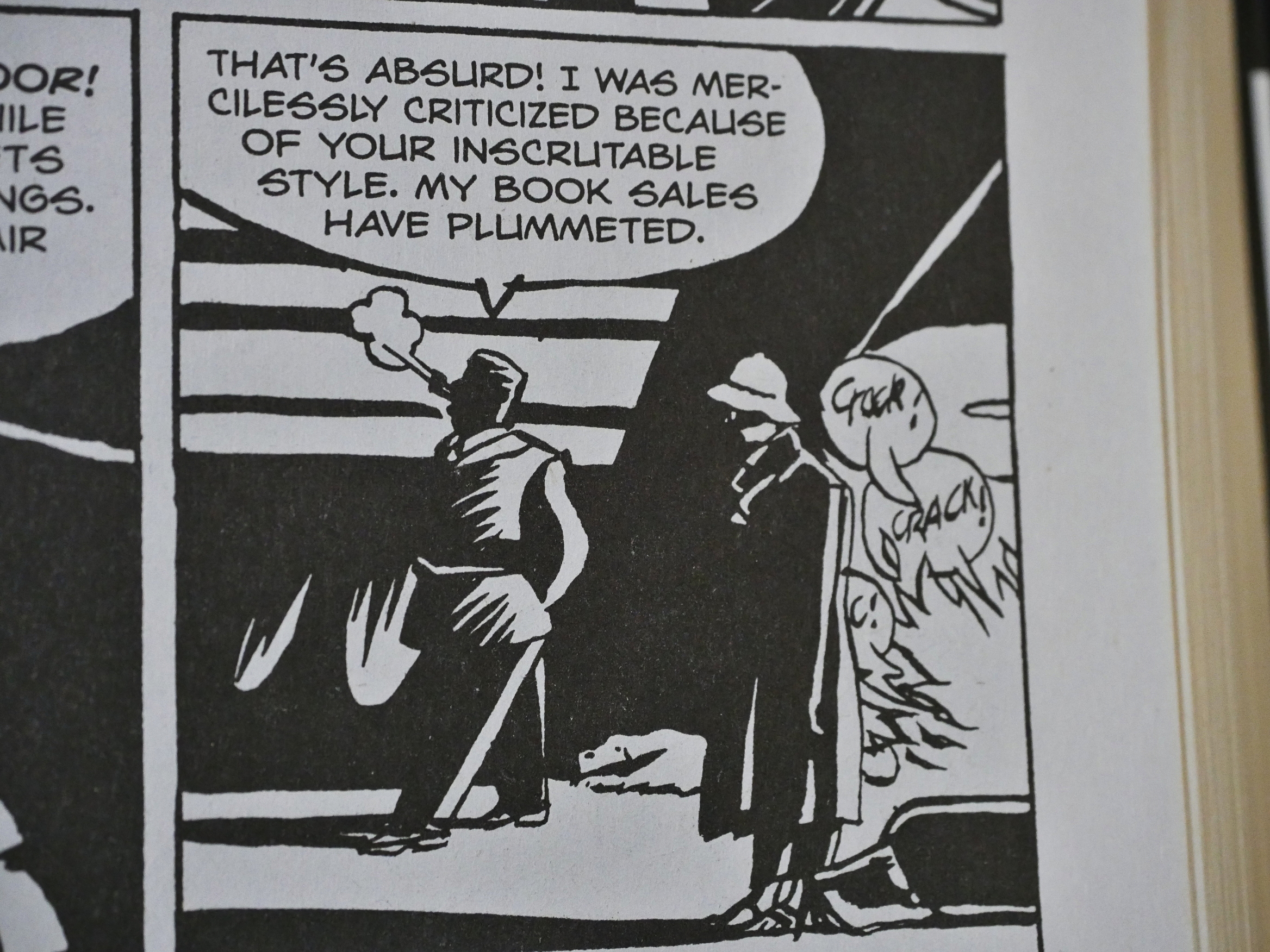 … and then absolutely refuses to apologise because swiping Muñoz’ style was a commercial mistake. 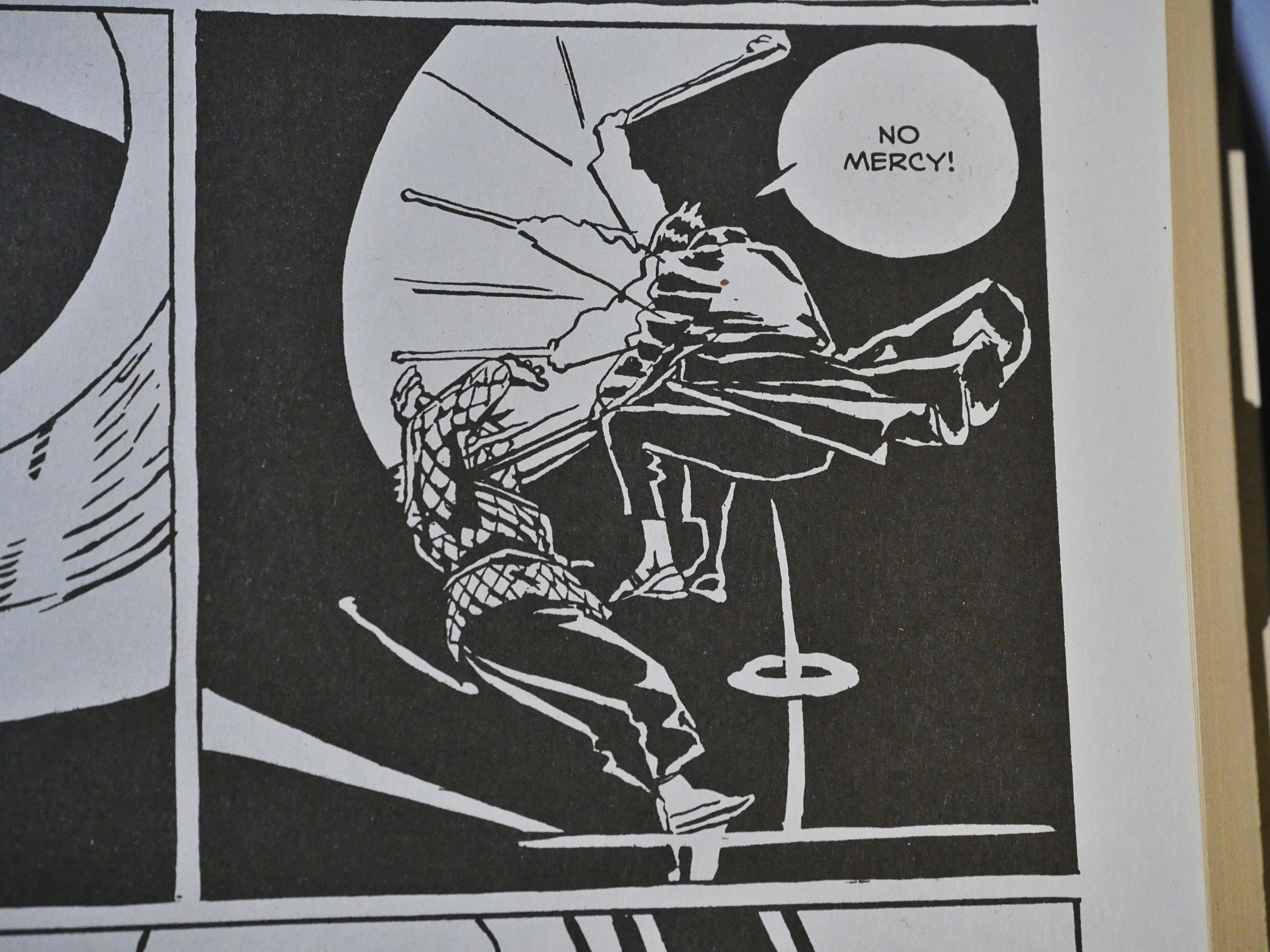 The story has two endings: In Alack Sinner’s dream, Martinez seems to kill Kitten, or at least beat him up bad. 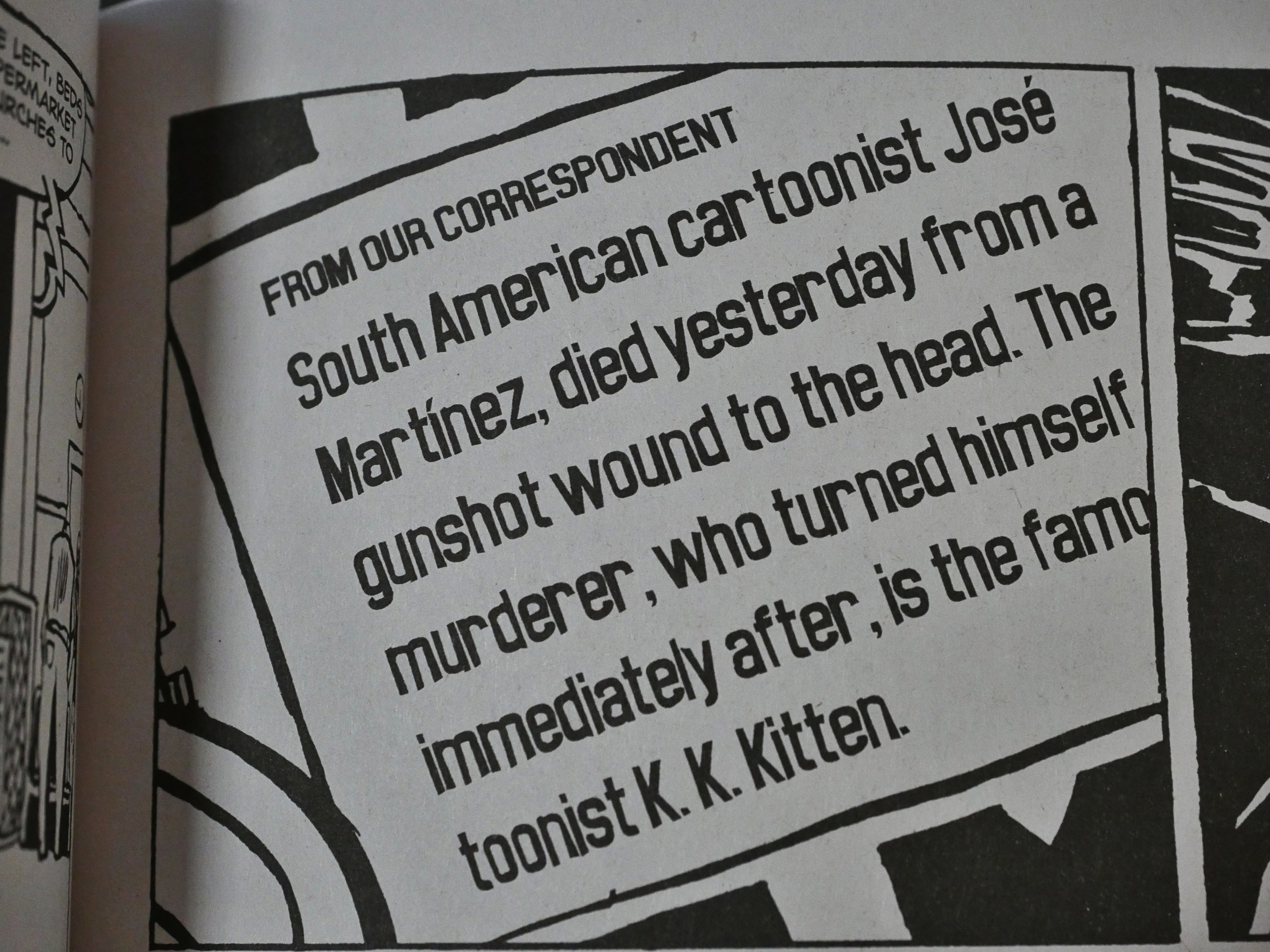 In reality, as Sinner finds out from a newspaper, Kitten killed Martinez.

It’s hard to tell from this story whether Sampayo/Muñoz are just goofing around, or whether Martinez’ feelings are representative of their own feelings. The “real” ending seems to suggest the latter, I think, but the depiction of Kitten as living in a mansion and smoking a pipe seems to suggest the former. 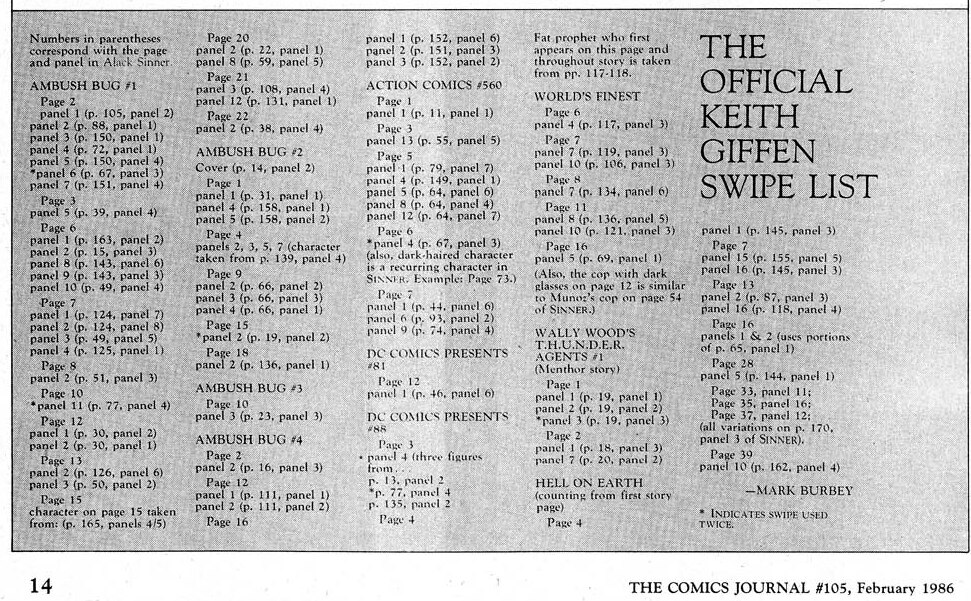 Here’s a list of panels Giffen swiped, compiled by Mark Burbey for the Comics Journal in 1986. 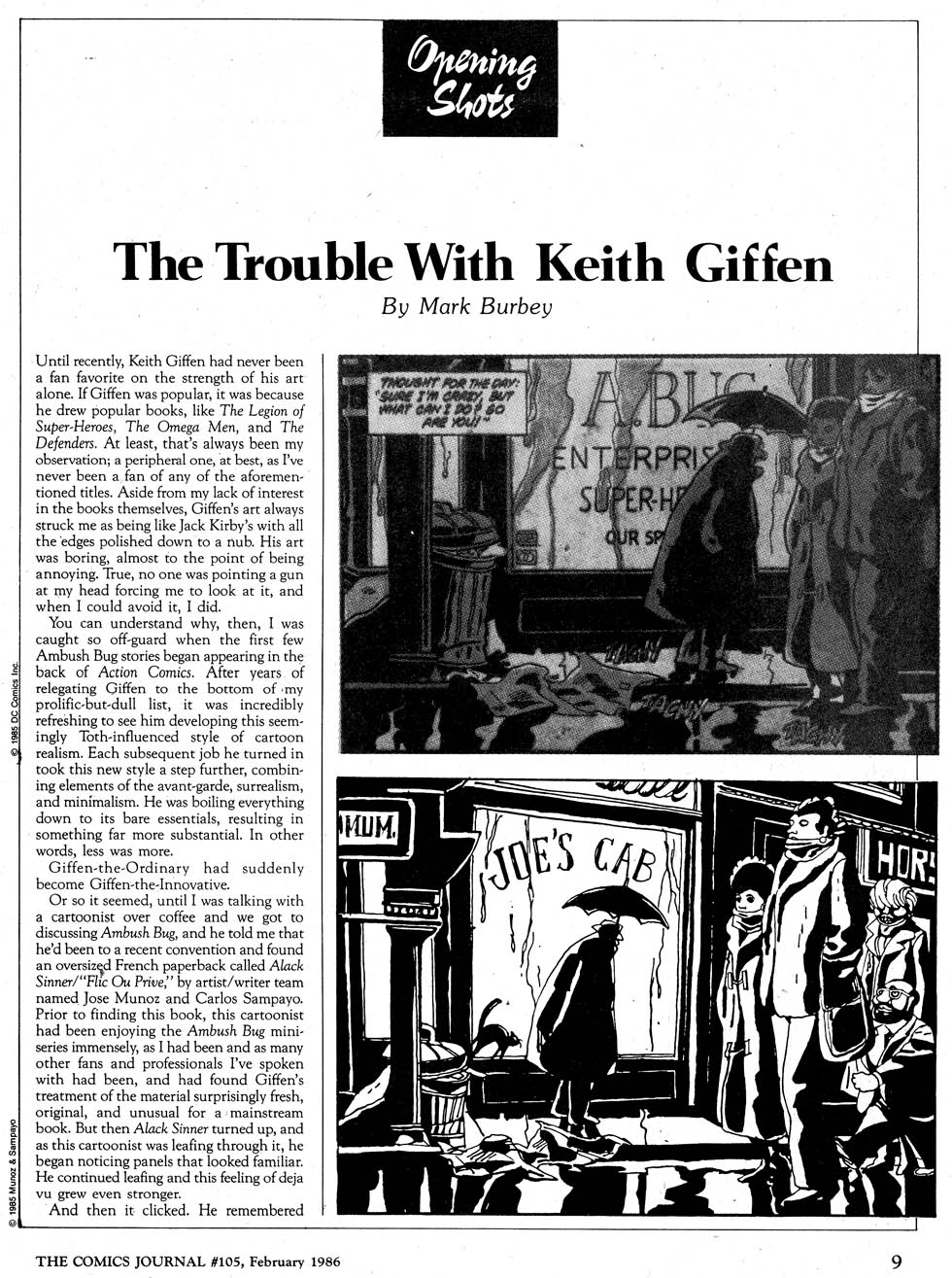 And here’s an example.

Giffen’s side: When contacted by the
Journal. Giffen said Burbey’s article
misjudged his intent. He said he wasn’t
attempting to steal from Munoz, but
had unconsciously absorbed Munoz’s
style after intensively studying his art.
Giffen told the Journal he had dis-
covered Munoz from Xeroxes of his
and writer Carlos Sampayo’s Alack
Sinner. Although he couldn’t read it,
Giffen was instantly enthralled by the
work. Giffen insisted he made no at-
tempt to hide the influence, am] orxnly
raved about the artist. Contesting the
suggestion that he had lifted Munoz’s
style for his own personal gain, he
B)inted out that while his previous art
style, used on such titles as lÆgion of
Super Heroes and Omega Men, was
becoming a fan favorite, his “Munoz
style” was, as he put it, ‘ ‘universally
loathed and scorned” by his audience.

Hah hah! So that bit (from the comic) was a quotation from this Comics Journal story.

Although contesting many of the
conclusions drawn in the article (he in-
sists he never traced a panel. or even
drew with Munoz’s work in front Of
him, despite the fact that Burbey
wrote, “l counted a minimum Of 70
swipes spread out among eight com-
ics, with 28 swipes in Ambush Bug #1
alone. ” Accompanying the article was
an “Official Keith Giffen Swipe List, ”
in which Burbey documented nearly
I(X) examples by Giffen of composi•
tions, characters, and inanimate ob-
jects), Giffen admitted it had opened
his eyes to the extent he had taken
from Munoz, a realization that he had
“ceased to be Keith Giffen… and
that’s not the idea.” As a result, he
backed off and made an effort to not
copy Munoz’s style as much.

Perhaps nobody’s talking about this because nobody bought the book? It’s a great book: Some of the mid-period Sinner stories dissolve into confusion, but this volume has two very well-made and satisfying classic noir stories. And Muñoz’ artwork, as always, is just transcendent. I give it all thumbs up: One of the best collections of comics released last year.