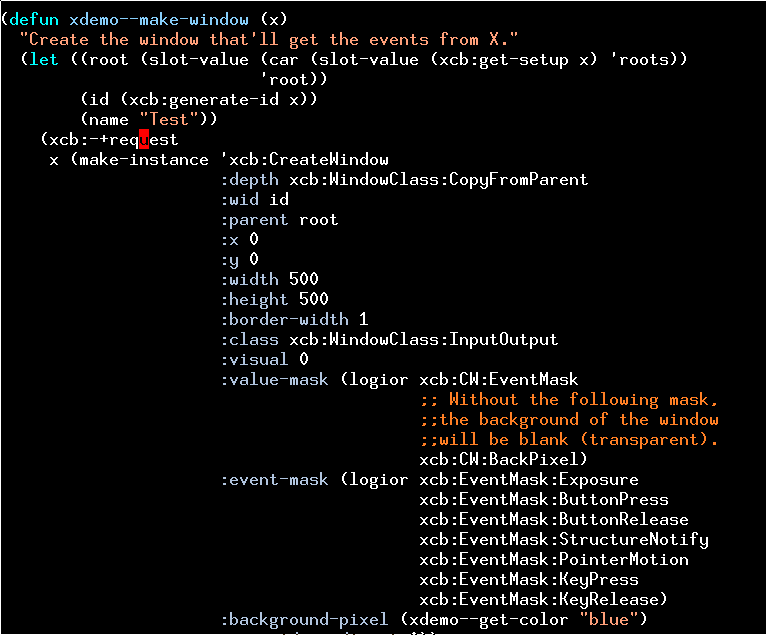 While tweaking the Emacs-based screensaver, it began to become clear that I just didn’t have access to a sufficient number of X events. In particular, I want to be able to wake the screen up by hitting the shift key, and I just could see any way to get at that event.

I’m taking his word for it that it’s simple, but I didn’t want to get into low-level Emacs hacking at this time, so I wondered whether I could just speak xcb directly.

There’s an excellent Emacs library for talking to X, but the problem is that there’s not a lot of documentation or example code. I wanted to pop up a (transparent) window, get any user events, and then do stuff based on that (i.e., stop the screensaver).

So I googled for “make-instance ‘xcb:CreateWindow”: 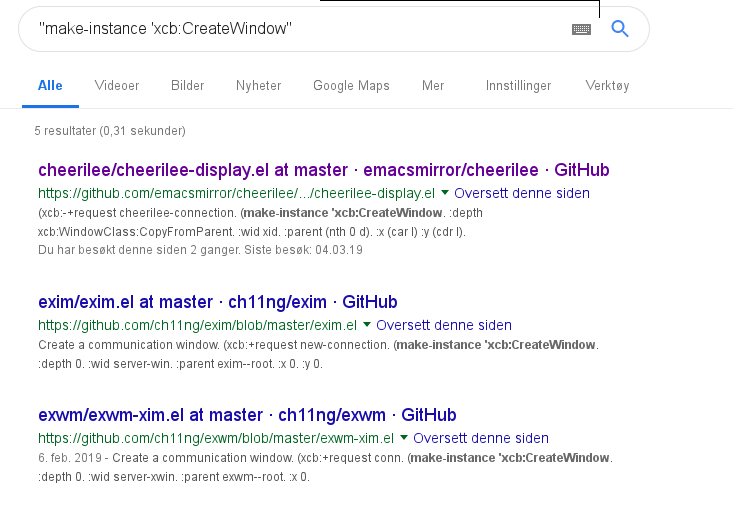 So I cheerily tried the first one, and the code there is very nice and understandable. But it took me some time to figure out how all the parts work together by looking at the code, the xcb.el library, and the official X documentation.

The good news is that there’s an almost 1:1 correspondance between the X C-level function and the xcb.el library. xcb.el doesn’t do any C stuff: It just talks to the X server over a network connection, which is a nice solution, because it meanst that you don’t have to compile any support into Emacs or use the C module layer.

So now I got it to work! You can exit the screensaver with any relevant X event.

But to help other Emacs hackers that may in the future want to do other xcb things, I’ve factored out the bits to create a window and then do stuff based on actions. I think it’s basically as minimal as it can be and still demonstrate the basics of how this stuff works. Some of the code is crabbed from cheerilee.

It’s not difficult stuff, because xcb.el is very nice. You just push objects to X and you get events back, and it feels like a very natural way to work in Emacs with these concepts.

Go forth and X.