While using the Emacs WordPress interface on various screens here, it became clear that the sloppy way I was laying out various tables just didn’t really work. I was using the `variable-pitch’ font and sort of eyeballing how much space each column would take and then using `display ‘(space :align-to 100))’ to line stuff up.

But the size of fonts varies wildly from computer to computer, and what looked nice on my HiDPI laptop didn’t line up at all on my LoDPI screen.

So I switched to using fixed-width fonts:

And I just thought, *sigh*.

It just looks so oldz. I spend a lot of time in Emacs in eww which does nice fonts, so I’ve grown less used to the er starkness of tables like this.

Surely there has to be a way to do tables with proportional fonts, and of course there is: eww/shr lays stuff out without a problem, so I just had to take a similar approach here. 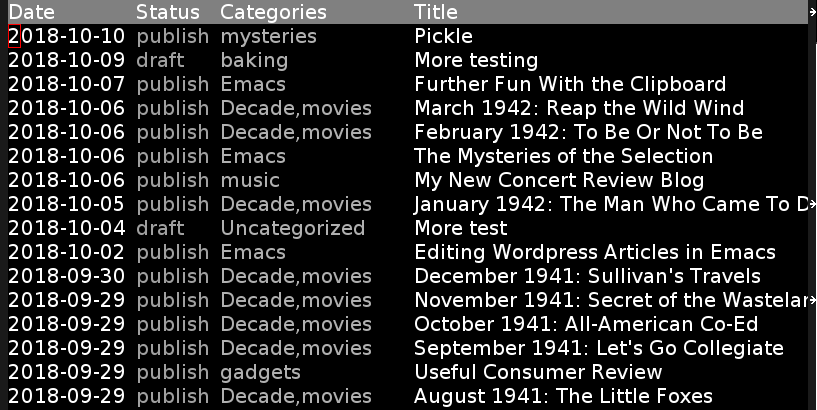 The package is on Microsoft Github now.

This also allowed me to implement table headings that you can click on to sort the table on the different columns. And I wanted to keep the interface really simple, because I have to say that I hate working with the tabulated-list.el interface, which is a mess of buffer-local variables and magic always happening wherever you’re not looking in the code.

So the interface is one simple function that takes obvious parameters: A list of column names and max widths, and then a list of row contents:

to get whatever proportional font you want on each element.