A while ago I read the following in an article on Hooded Utilitarian:

[…] the revolution that really drove Heavy Metal was very distinctly French and had a lot more to do with the format of how French comics were serialized than with any kind of musical aesthetic, something that is largely transparent to Anglophones. Instead of serializing stories 22 pages at a time on a monthly basis, French BD magazines serialize their stories half a page at a time in weekly anthologies and have done since the 50s. It was a technique made popular with Tintin magazine, and perfected by Spirou. By the end of the 60s, Pilote (under the editorial guidance of Rene Goscinny, not coincidentally, the writer of Asterix) was the big boy on the block, largely due to this production methodology.

The collected editions of popular stories and characters would stack half-pages together to create magazine-sized albums. Take a look at any French (or European) BD collection produced before 1970 – Asterix, Valerian, Corto Maltese, Blueberry, Philemon, Spirou – and you will notice a white gutter running horizontally through the middle of almost every page in the book. This is a direct artifact of the serialization methodology, regardless of whether the story was actually serialized or not. There were occasional splash pages in these books, but that’s more of an exception than a rule.

While I recognised the “half page” phenomena in virtually all older Frenchey (that’s a word) comics, I was rather puzzled. The standard post-war European comics length is 46 pages. Two times 46 is (where’s my slide ruler), er, uhm, 92. Stay with me here, even though the math is getting complicated.

So, 92 half pages on a weekly schedule. That would be… like… a year and a half to read an Asterix or Blueberry story. I know the French are very cultured and stuff, but that French children were this patient, even in the 50s and 60s, didn’t seem intuitively correct.

And some stories are even longer: A 58 page length isn’t uncommon, either, especially in the 70s. Were 70s children that patient? Two years for a Spirou story?

Now, if you’re American (and so many people are these days), you have no idea what I’m talking about at all, so allow me to illustrate with some pictures taken from a couple of random bande dessinées (that’s Frenchey for “comics”).

First we have a page from a 70s Spirou page by Fournier (in a recent Danish edition). 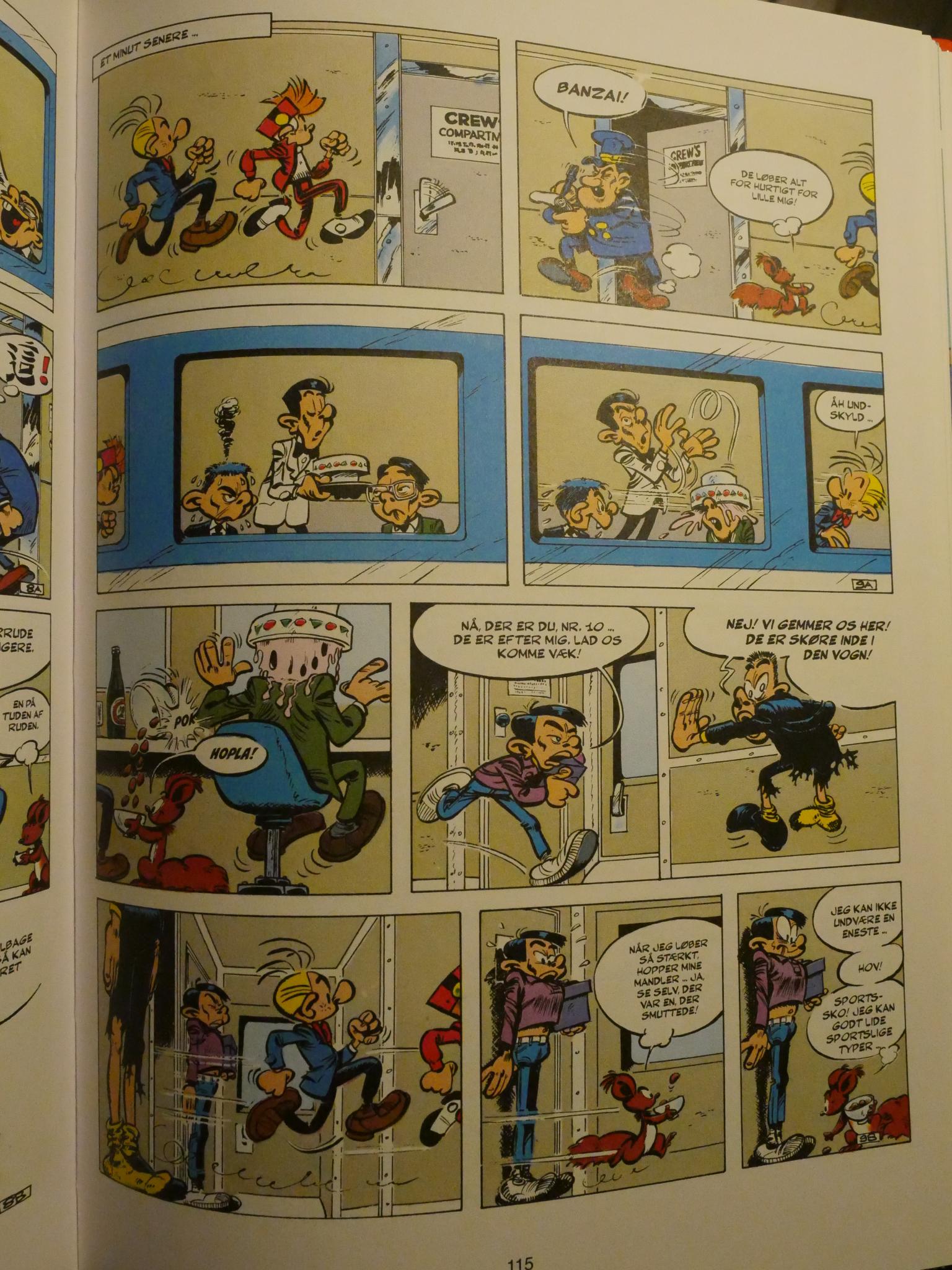 As you can see, the page is as described in the quote. The page has a gutter in the middle. 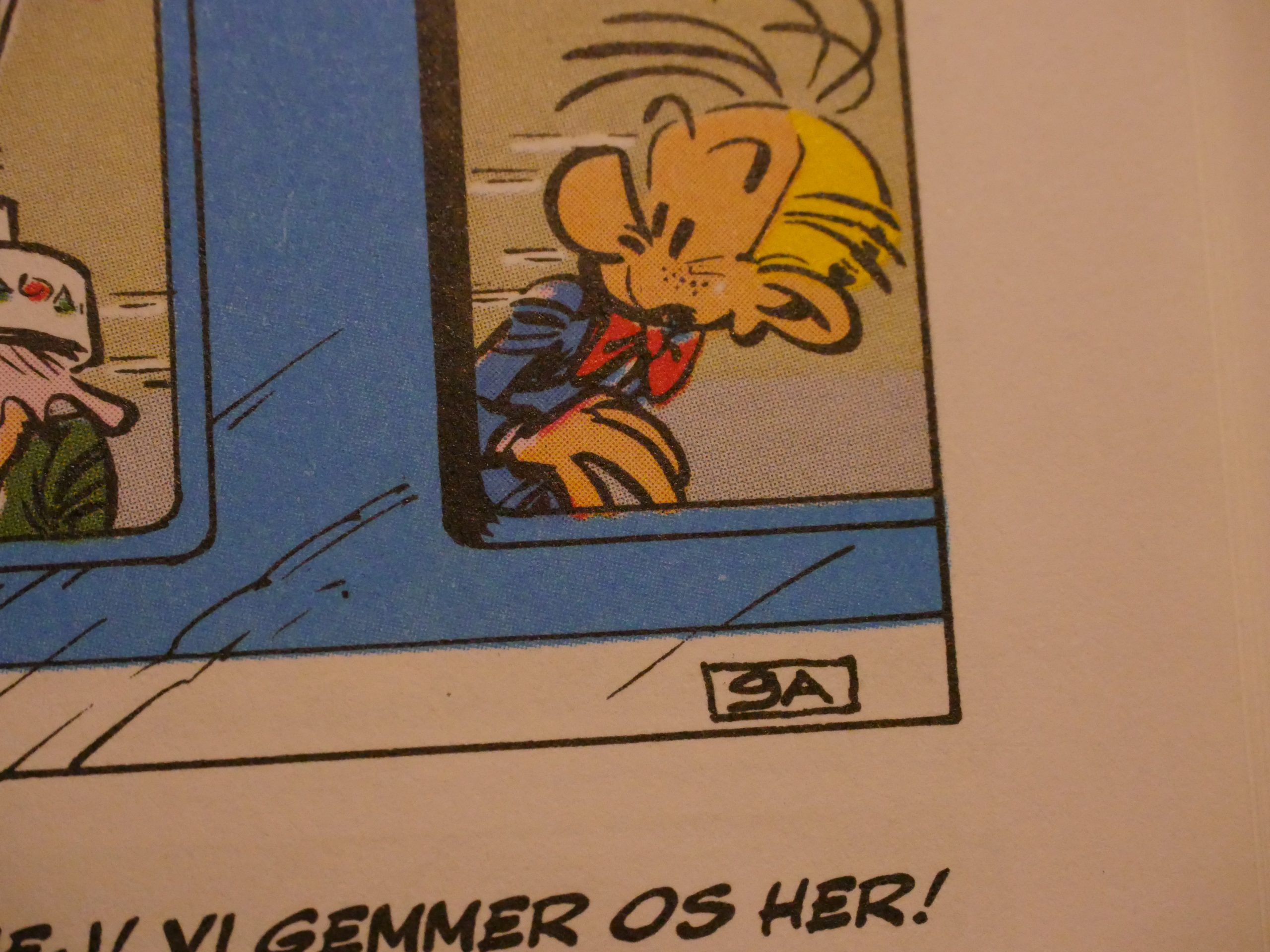 Above the middle gutter, the artist has written “9A” in a box. 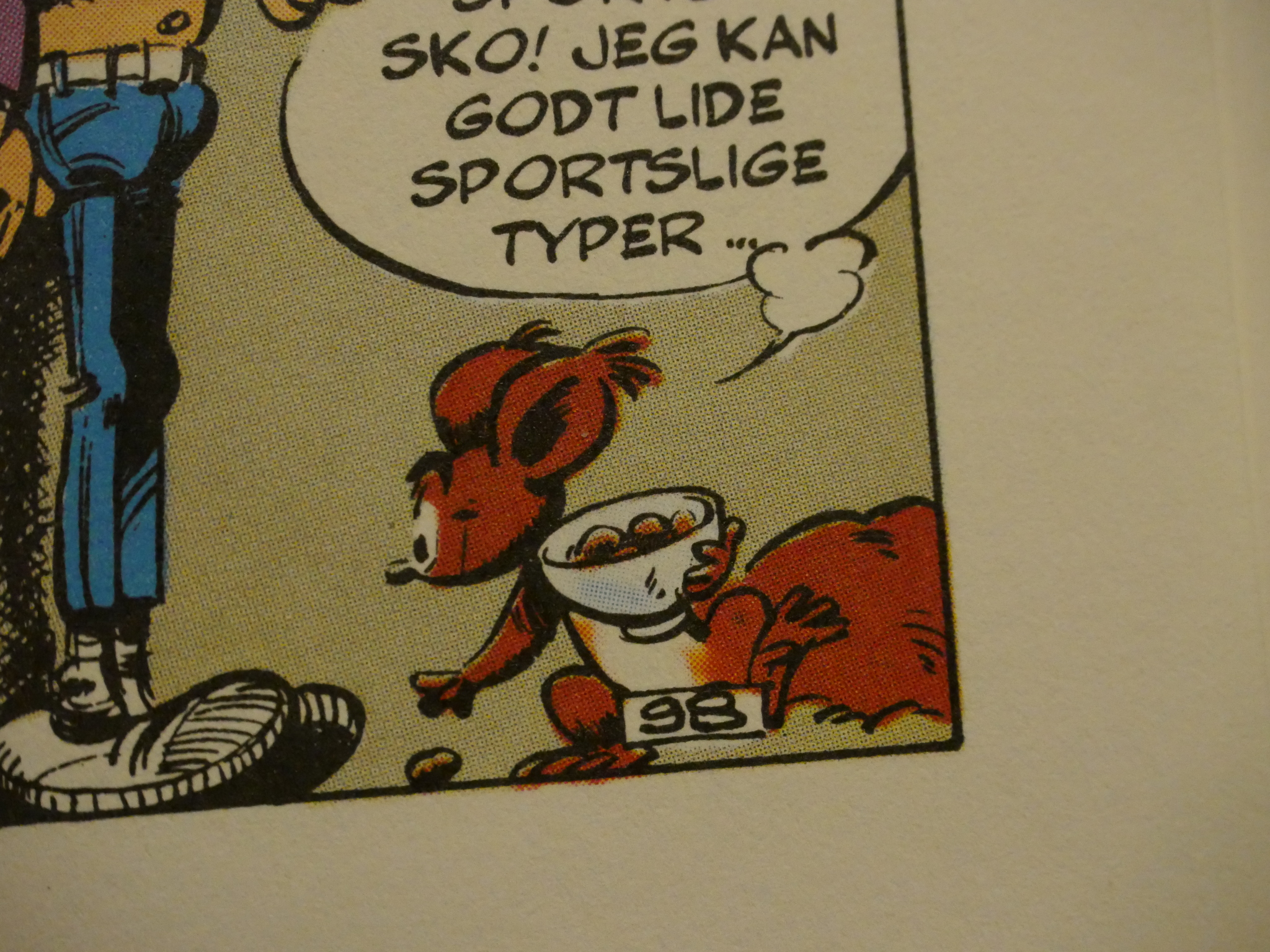 And below the second part, the artist has written “9B”.

I’ve never seen any of the original magazines Frenchey comics were serialised in, and the A/B thing has intrigued me ever since I was a child and read stacks and stacks of Frenchey albums (translated into other languages, since I don’t understand French. Much).

So that’s the explanation, eh? Incredibly patient French children? My! 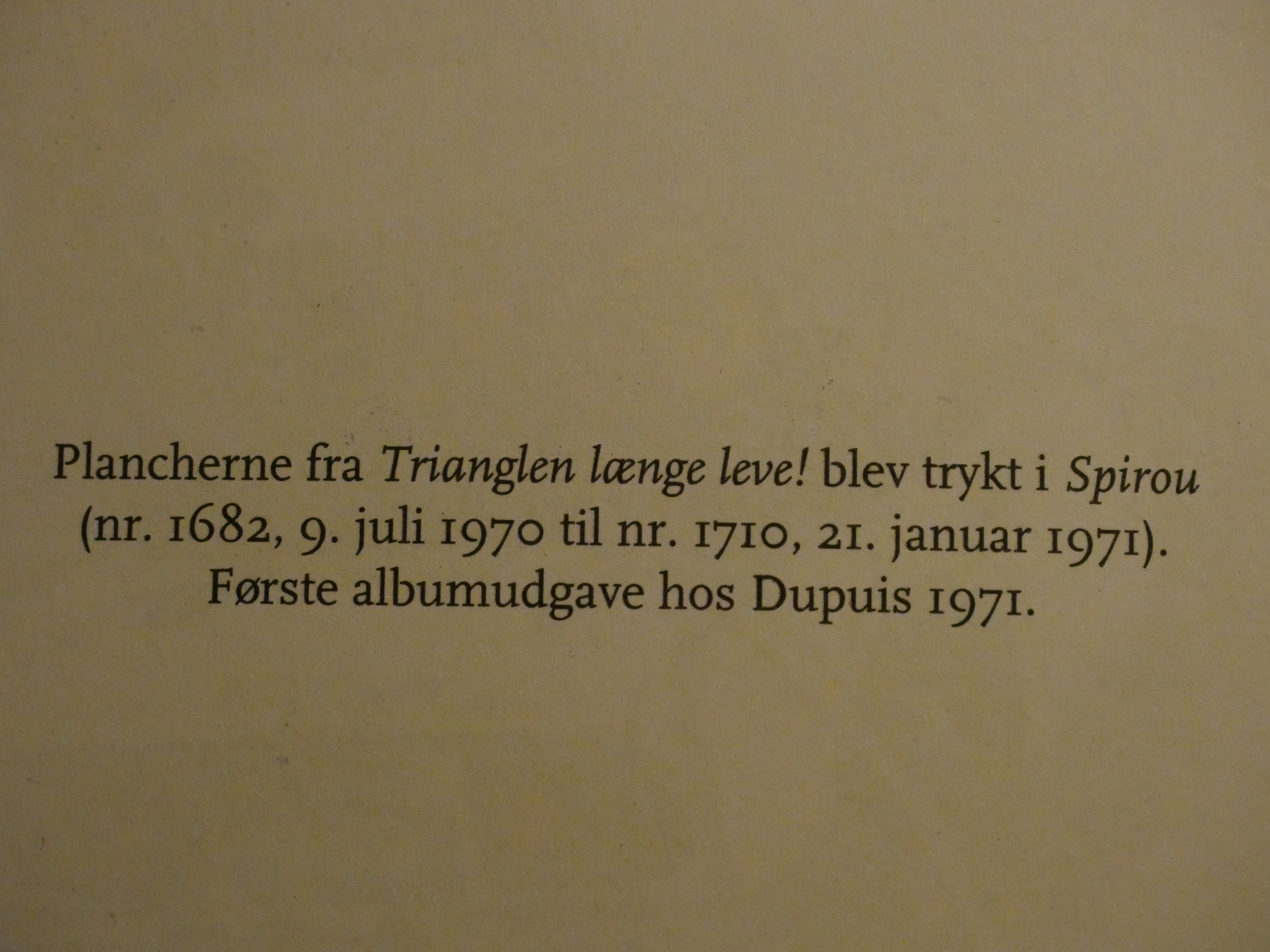 And this story is 58 pages long.

If we, again, apply our fantastic maths knowledge here, we see that instead of publishing half a page every week, this story was published at a rate of two pages per week. That is, French children were only a quarter as patient as originally suggested.

Still pretty good, but not extraordinary. 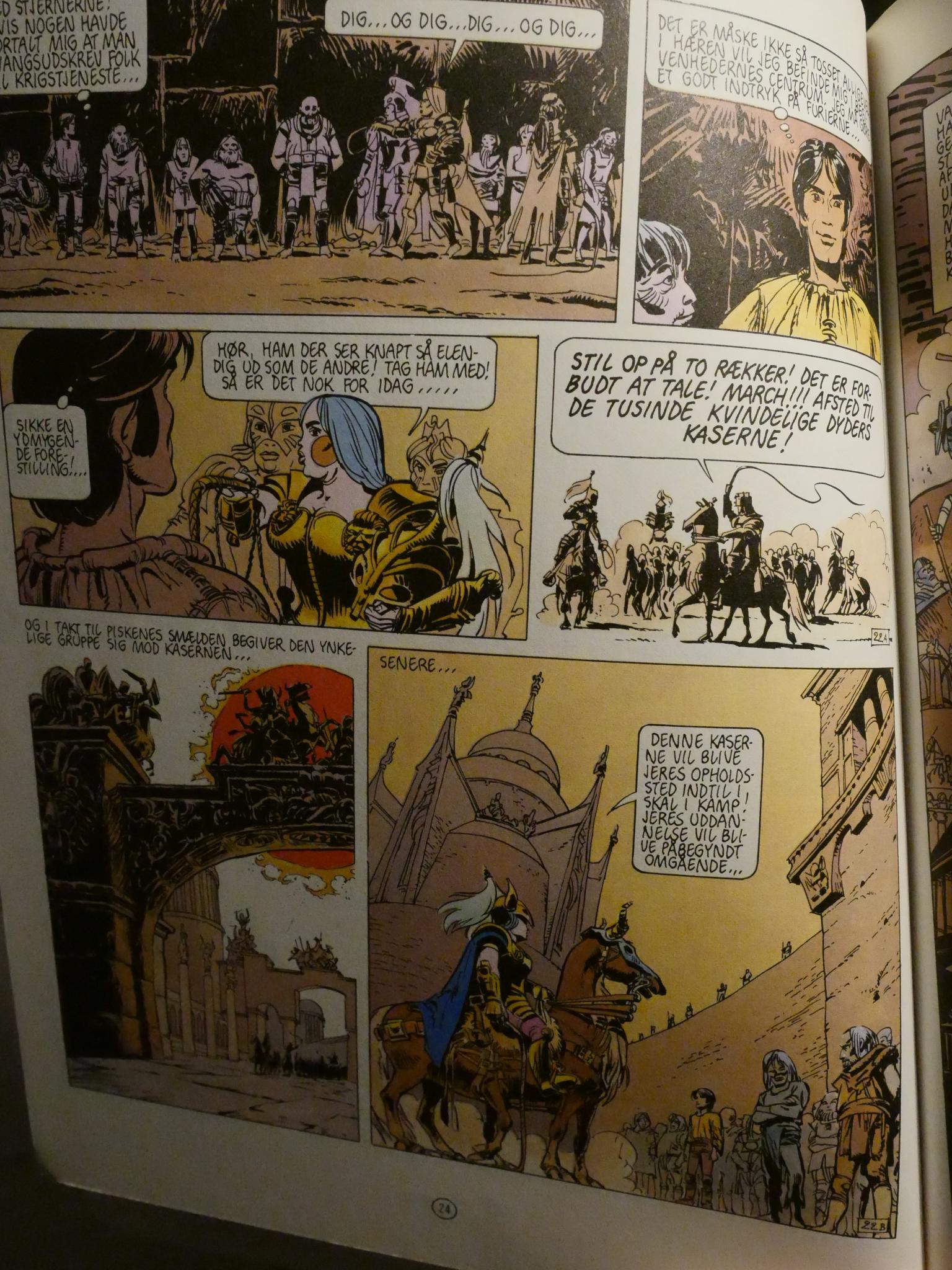 But that may be a fluke. Let’s look at another example. Above is a page from Valérian et Laureline, the album version of Le pays sans étoile, collected in 1972. It, too, has the half-page division and the A/B numbering on most pages.

Perhaps they overslept one week.

In any case, it’s more than half a page per week.  Again. 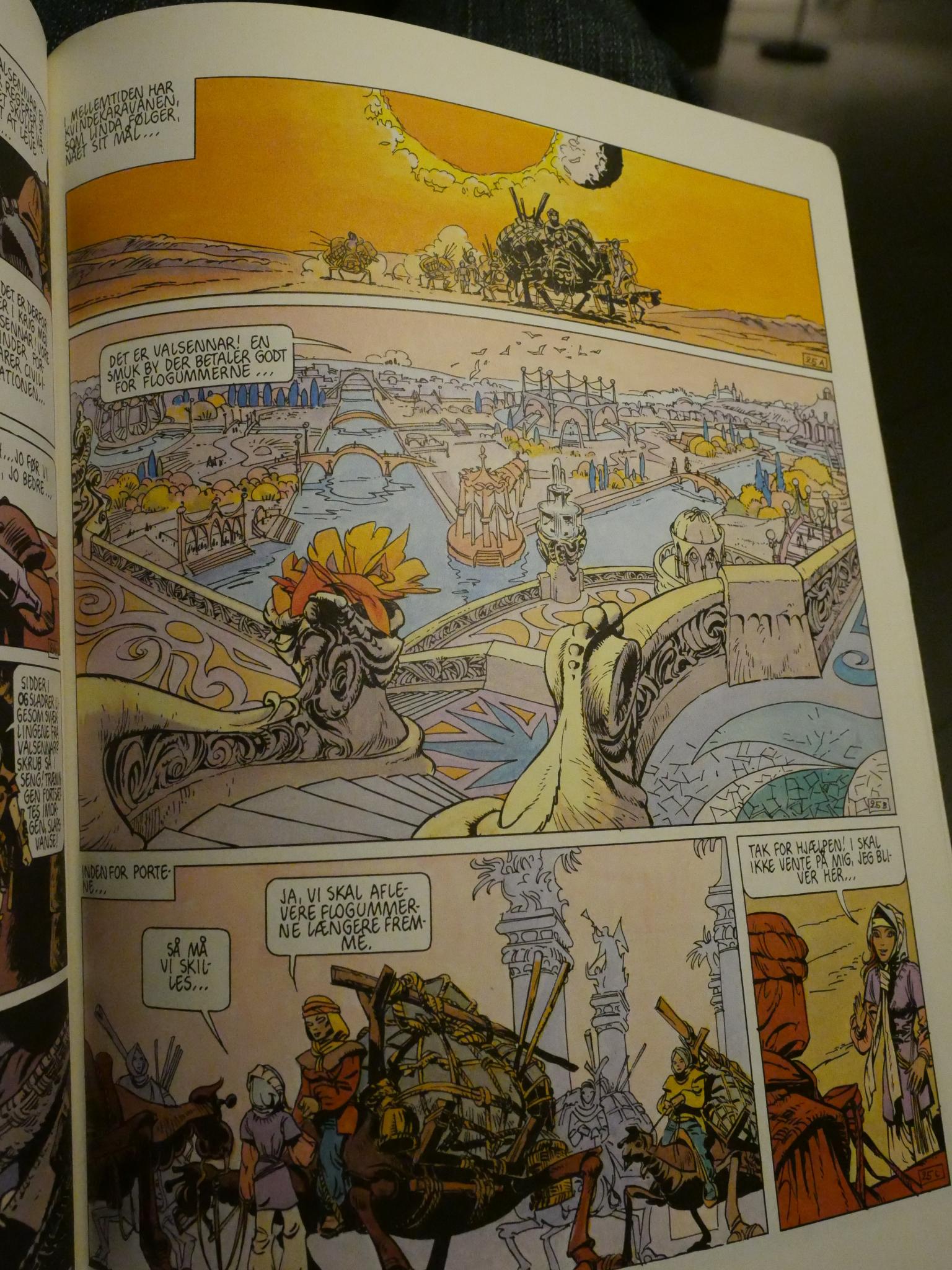 (As an aside, Mezieres uses quite a few non-regular non-half-page layouts, too, like this one, which has a rare A/B/C marking.)

At this point, I feel like it’s time to go out on a limb here and call it: Classic Frenchey comics were not serialised at the pace of half a page per week.

But there is a phenomenon here: There’s the A/B thing on a vast majority of these pages. What does that mean?

Perhaps… even if the normal pace was two pages per week, perhaps they were published in half-page layouts? Every page half-full of ads? Sounds awfully uncultured and un-French, but at this point we have to use not math, but Google Image Search.

Here a very helpful person has written about an issue of Pilote from the 60s.

Scrolling down that page, I don’t see a single half page comic. Virtually all of them do use the “gutter in the middle” layout, though. 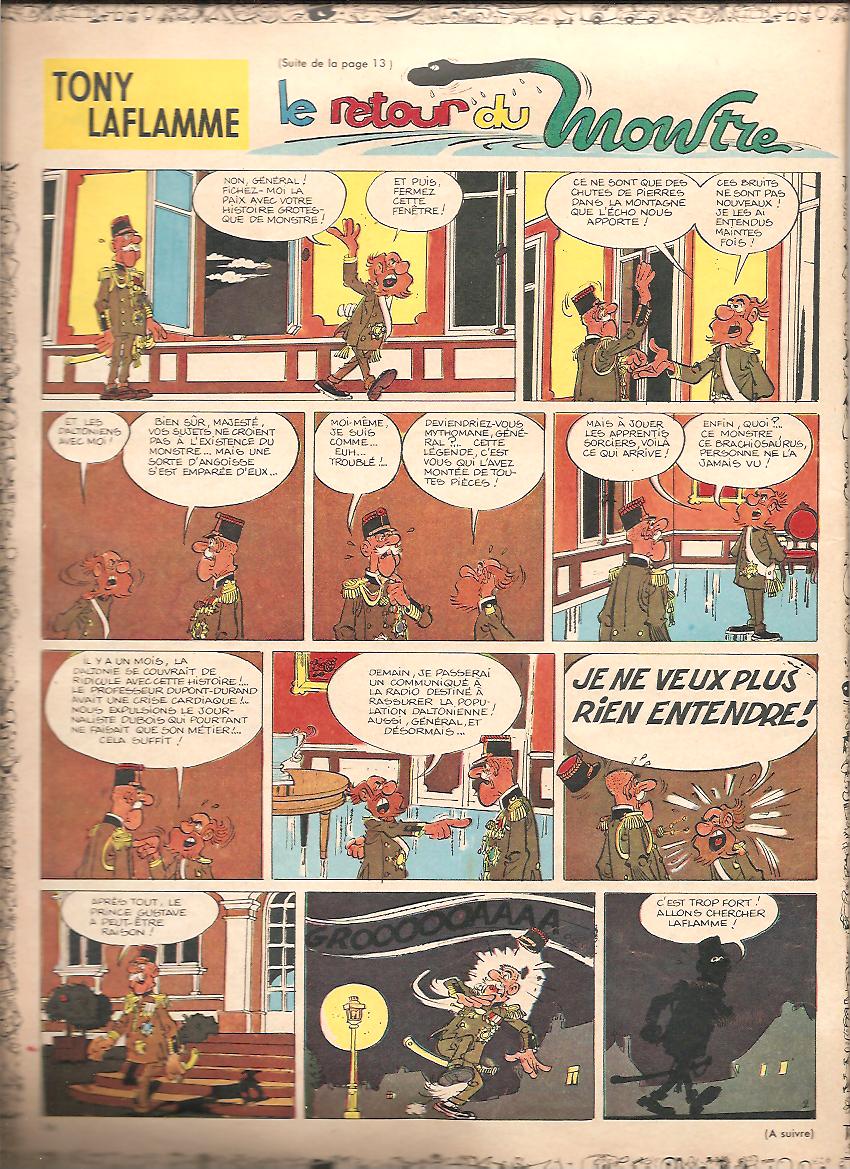 (To digress a bit more from this in-depth investigation, I didn’t know that these magazines used to run a logo (and stuff) at the top of each page. That explains why albums are kinda “squat” format wise, since these logos are excluded in the collection.)

Googling for pages of the Spirou magazine is slightly more difficult, but here’s one, at least: 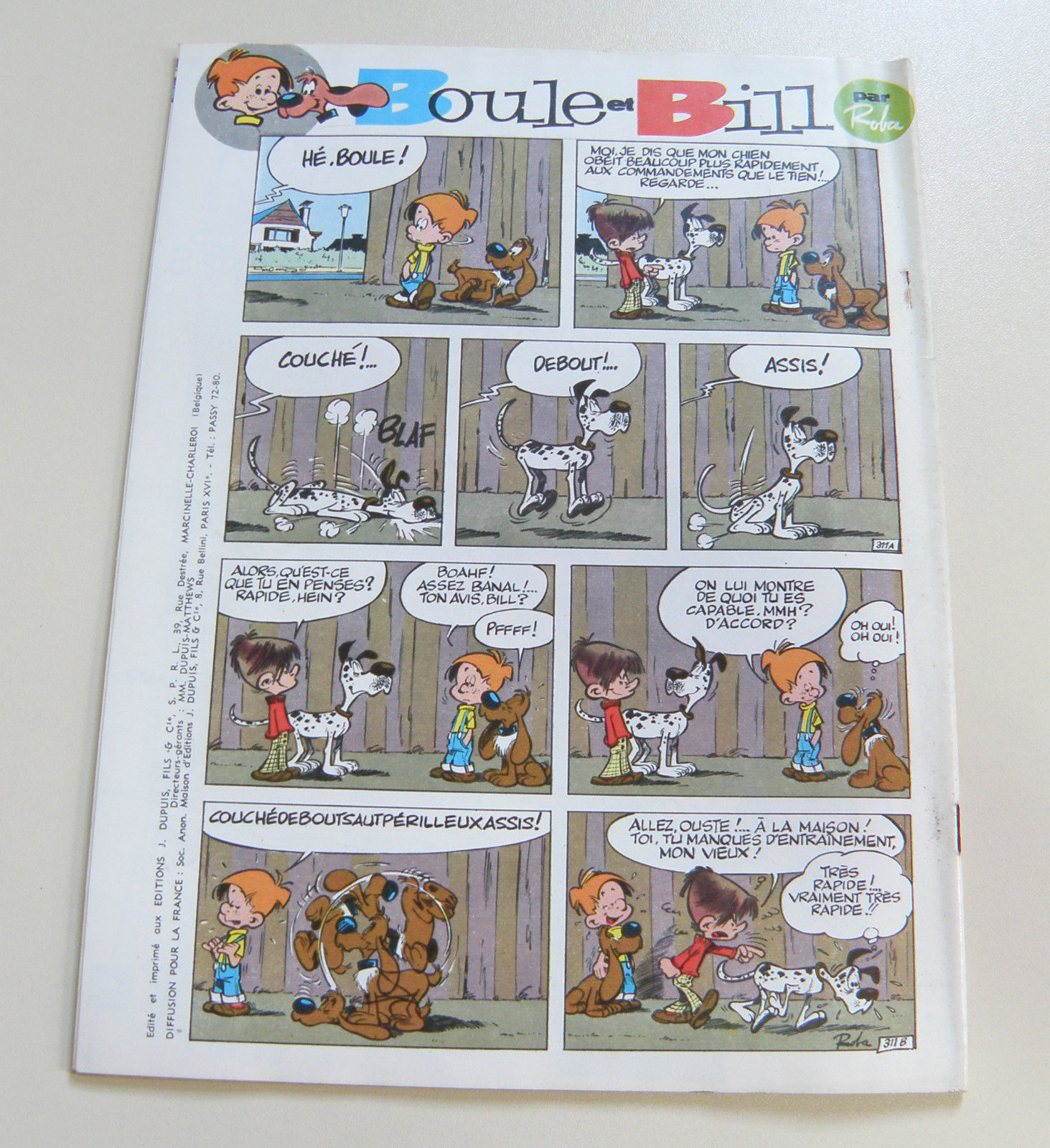 It’s from the mid-60s, and … it’s a full page. The only half-page results I got in the search were Gaston Lagaffe, but they are half-page gags and were apparently run on the covers for a while.

So: European comics were not published on a half-page-a-week basis, and they were published as full pages.

So what’s up with the A/B thing? WHAT? Was there a paper shortage and everybody just drew on smaller paper? Is it more ergonomic with smaller page?  Less stretching over the drawing table? Were the comics reformatted into smaller books? Were the editors just peculiar? WHAT?! 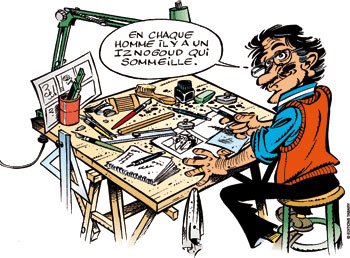 Googling for people at their drawing tables (“table à dessin”?) from olden times is difficult. I found the drawing above by Tabary where he does show himself with half page pages, but that’s not exactly a smoking gun, evidence wise…

Finding modern artists is easy, and they draw full pages, but that’s no surprise since they don’t use the half-page layout.  Usually.

This investigation has gone as far as it can (i.e., I’m hungry now and I have to go make dinner), so unless something extraordinary happens (like somebody who knows what’s up with those A/B half-page layouts leaves a comment here), I guess we’ll just never know.

6 thoughts on “Half Page BD: An RT Investigation”