As you will recall (I command you!), I hit on the (frankly indefensible) idea of not deleting ripped DVDs and Bluray disks after I’ve watched them.  Because reasons.  So I ended up with a 12TB disk system to store all that.

And, surprise, half a year later that’s beginning to look too small:

In the mean time, the nice people at Seagate have started to make 8TB “archival” disks. And somebody was selling a 4 bay fanless disk dock.  Hm… 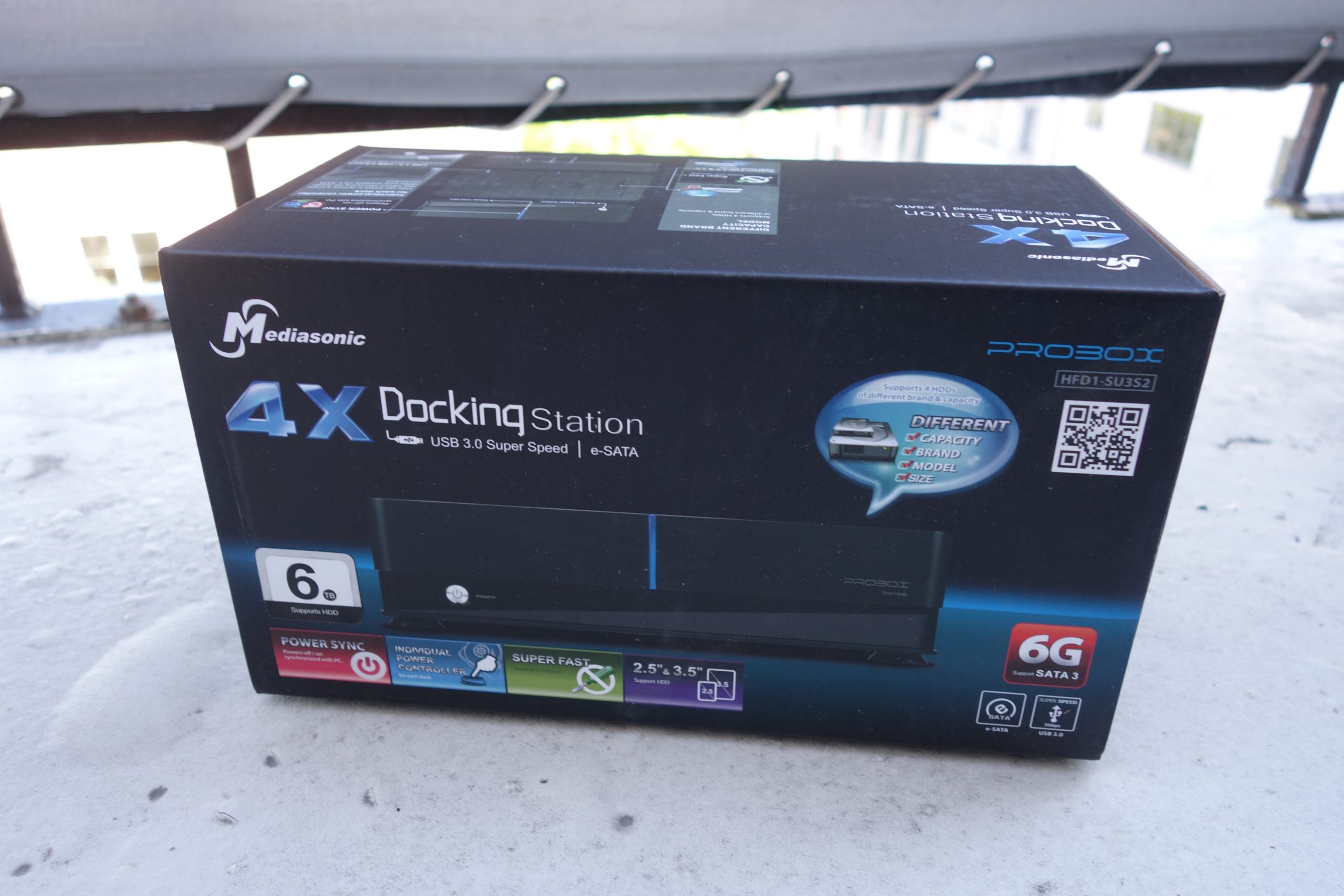 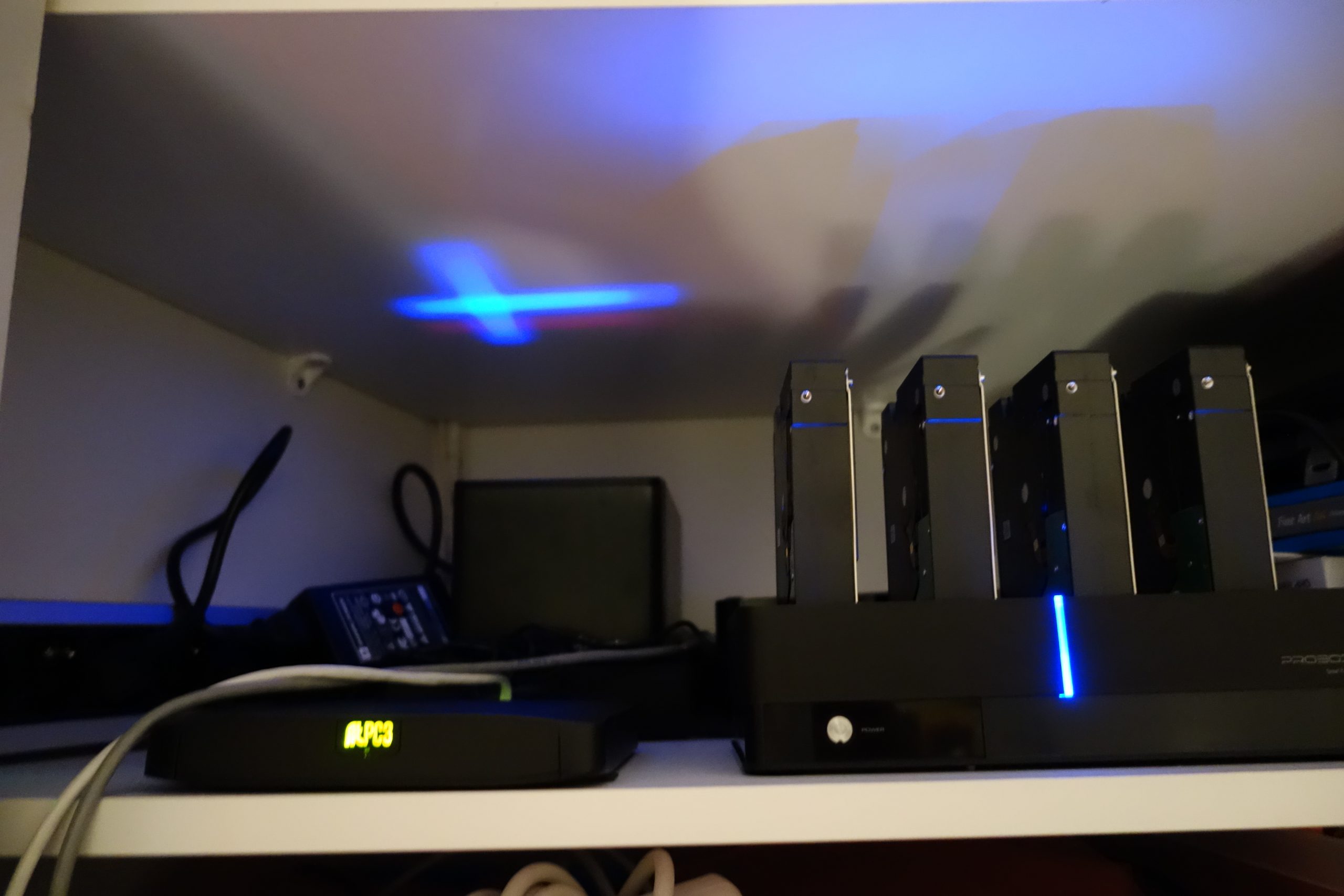 Oops.  I forgot to take all the pictures in between.

Anyway, you can see that this is a “dock” type thing with the disks poking out on top, and not a cabinet.  That’s not very confidence inspiring.

It has both USB3 and e-SATA port multiplier functionality.  I decided to go with e-SATA, since USB is less stable than it should be.

The tiny Fit-PC3 machine in the cupboard there has an AMD SATA controller.

Apparently, some BIOS-es don’t enable the port multiplier (PM) stuff, but everything just worked on the Fit-PC3: All four disks showed up as /dev/sdx devices.

I wondered what the raw read speed would be from one of these disks via the port multiplier stuff, and I was shocked.  I got 190MB/s when reading the raw device sequentially.  That’s pretty awesome.

Then I put the four disks into a RAID5 configuration and waited a couple of days.  Let’s check in now:

When reading sequentially from the raw md device, I get a read speed of 140MB/s.  Not great, but not awful, either.

Whoho!  I put ext4 on the RAID set.  The write speed is pretty awful: About 30MB/s.  The read speed is about 50MB/s.  That’s worse than I had expected.  Is it the e-SATA port multiplier that makes things that slow?  Weird.

Hm…   Mounting with -o data=writeback seems to help a bit.  I then get 45MB/s.  With the journal completely switched off, I get 54MB/s.  Still really slow.  Perhaps the CPU is underpowered?  But read speed shouldn’t be an issue CPU wise…  The read speed is really puzzling.

Anyway, I started rsyncing over the files, and I get about 35MB/s when doing that.  *sigh*  This is going to take a few days, especially since it seems like the Seagate disks sometimes go catatonic, and you can’t write anything to them for hours at a time…  Binging around a bit, it seems like this is a known issue with these 8T disks: Sometimes the write speed drops down to zero.  But they usually recover again.

After four days, all the .mkv files have been rsynced.  The write speed hickup didn’t occur again, so I’ve now got 10GB of movie goodness on the new RAID set.

Time for some benchmarking.

Wha…?  That’s, like, really fast.  Is pv miscalculating, or something?

Geez.  I’m really getting read speeds of 290MB/s, which is kinda spiffy.

So!  Success!  Now let’s see whether these disks survive being used for a while…

Well, that didn’t take long.  All the disks went AWOL, and the RAID failed.  A reboot brought the RAID back up again, but it’s going to have to resync, and that’s going to take days.

Well, we’ll see whether that was a one time error or…  not…