Peeps decided to film (bits of) a movie in my apt.  So I went away to various parts of the world and wrote the Gwene web interface.

I came back on Friday and had to like (eww!) work and stuff, but now I’ve gotten the apartment wired back up again so that I can listen to music and stuff.

The movie peeps moved most of my furniture out of the apt., and their stuff in.  They did an admirable job of putting All My Precious Stuff back where it was, but the computer stuff…  It’s complicated.  So I did that myself. 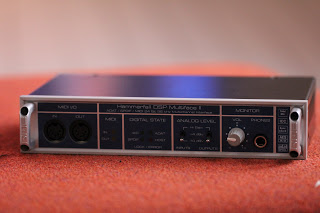 Unfortunately the main piece of equipment in my stereo setup, the RME Hammerfall DSP Multiface II (that’s a mouthful), just didn’t want to work.  So if you’re googling this, the symtoms were that the digital “firewire” interface worked perfectly.  The driver loaded, all the meters worked as normal, bopping up and down, but no sound came out of the analogue ports.  And nothing came in from the analogue input ports, either.  It was like the entire analogue bit was dead while the rest worked.

I went to my friendly neighborhood audio shop, ProLyd, and asked for advice, but they hadn’t heard of those symptoms before, so I bought a new one. And it worked!  I have music!

So that’s apparently a thing.  The Multiface II can semi-die.  I’ll ship the old one off for the fiords.

So unfortunately I have no harrowing stories about a trashed apt. or anything.  The film peeps were very nice, and everything proceeded as much according to plan as anybody could expect.  No new mysterious holes in the floor or the walls.  No mysterious footprints on the ceiling.  Or anything.

They did some final tiny shoots today, and now they’re off forever.

However, I just discovered this in the room next to the bathroom: 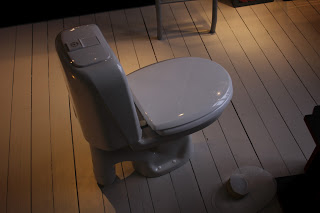 Doesn’t everybody dream of having a bathroom like this? 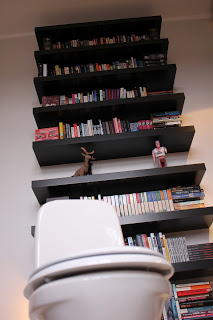 So chi chi.  So recherche.

Ok, I should send them a message…