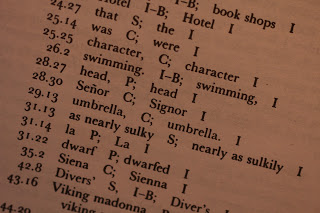 In the previous installment, we saw that Penguin had done weird stuff typographically.  And now I understand why.

In the back of the book is a “List of Variants”, which details minutely what manuscripts have been used.  I mean, important stuff like “La” vs “la”.

And they list these variants based on page and line numbers.

This was done for the previous, un-annotated edition.  So when they wanted to add some footnotes, they either had to re-do the entire “List of Variants”, or do it the easy/hard way by just pasting in new lines (in a narrower typescript) here and there.

It’s all so logical.