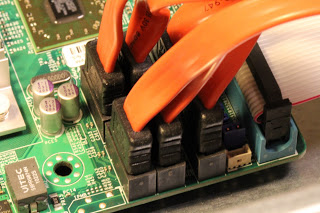 today I was rummaging through the drawers in the office, and I happened upon an SSD there.  It was a Corsair Force 3, which is a SATA 3.0 disk!  Yay!  I can finally do some benchmarking, I thought.

I put the SSD into the server and switched it on, but it came up as a 3Gbps device.  And there were only four ports visible, even though there’s six headers on the motherboard.  Just look:

After fiddling around in the BIOS a bit (I had to switch off IDE emulation and “combined mode”, whatever that is), all six ports appeared in Linux:


Diary, it turns out that Supermicro has absolutely no SATA3 motherboards.


Instead of turning to drink, despair and vi, as some might do, I turned to the browser and ordered a low-profice PCI Express SATA 3 card instead.  The reviews says that it’s supposed to play well with SSDs, too, and has realish hardware RAID.  I know that I earlier vowed never to use anything but soft RAID again after many dissappointing experiences with cheap-ish hardware RAID setups, but surely this time there won’t be any problems.