“Literary” comics are sometimes more faddy than “genre” comics. Whenever there’s a comic that breaks through to the general public and becomes a hit, it seems like all the major publishers call all available agents and put in an order of whatever genre somebody else had a hit with.

After Fun Home (by Alison Bechdel) became a phenomenon a decade ago, you had a few years where all the major publishers were cranking out coming-of-age autobio books. Some were good, but most were wretched.

The next fad every publisher were ordering metric tons of was artist biographies (often drawn in the style of the subject artist). I hope that’s peaked, because while that wave of coming-of-age autobio books weren’t much cop, at least the artists themselves found the subject matter (i.e., themselves) interesting, so it wasn’t all bad.

However, with artist biographies, you can tell that even the people doing the biographies have little interest in whatever they’re drawing. They’re just making product to fit publishers’ schedules.

Who can begrudge artists accepting advances from publishers, even if they come with strings attached? People who make comics make almost no money as it is, so it must be tempting.

(I’m not sure what the original artist biography that started this fad was… Anybody know?)

So it was with some trepidation I set out reading this month’s stack of comics, fresh(ish) from the presses, because I noticed something new: 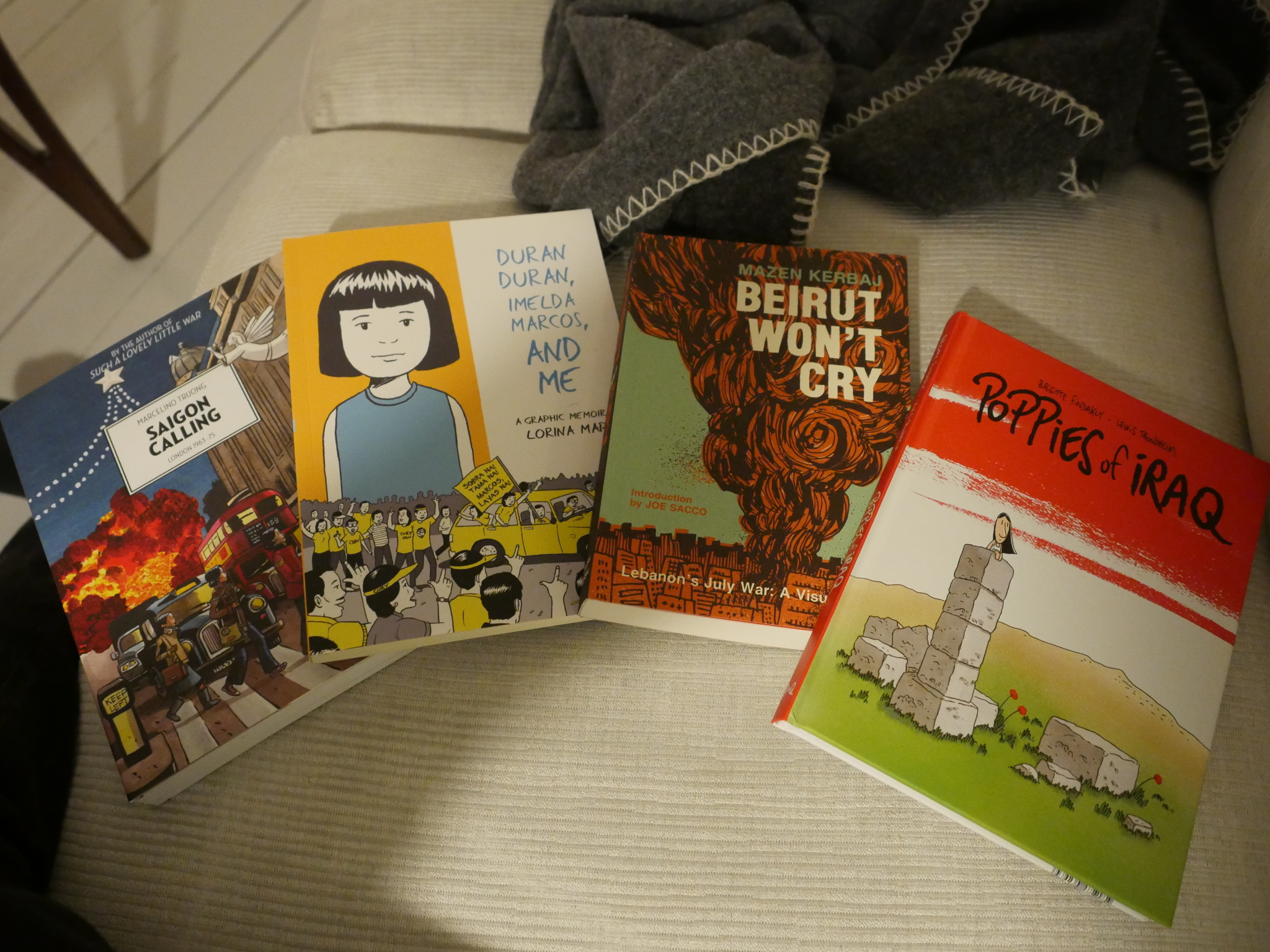 These books look suspiciously like somebody looked at the astounding success of The Arab of the Future by Riad Sattouf and thought: Perhaps if we mash up “growing up in conflict zones” with a Joe Sacco-ish “comics journalism from conflict zones” we’ll have a new, successful genre on our hands?  Comics take so long to make, so time-wise it seems plausible.

Perhaps it’s just a fluke? Perhaps this isn’t that bad? Perhaps these are just personal expressions that have nothing to do with Arab of the Future and/or Joe Sacco? 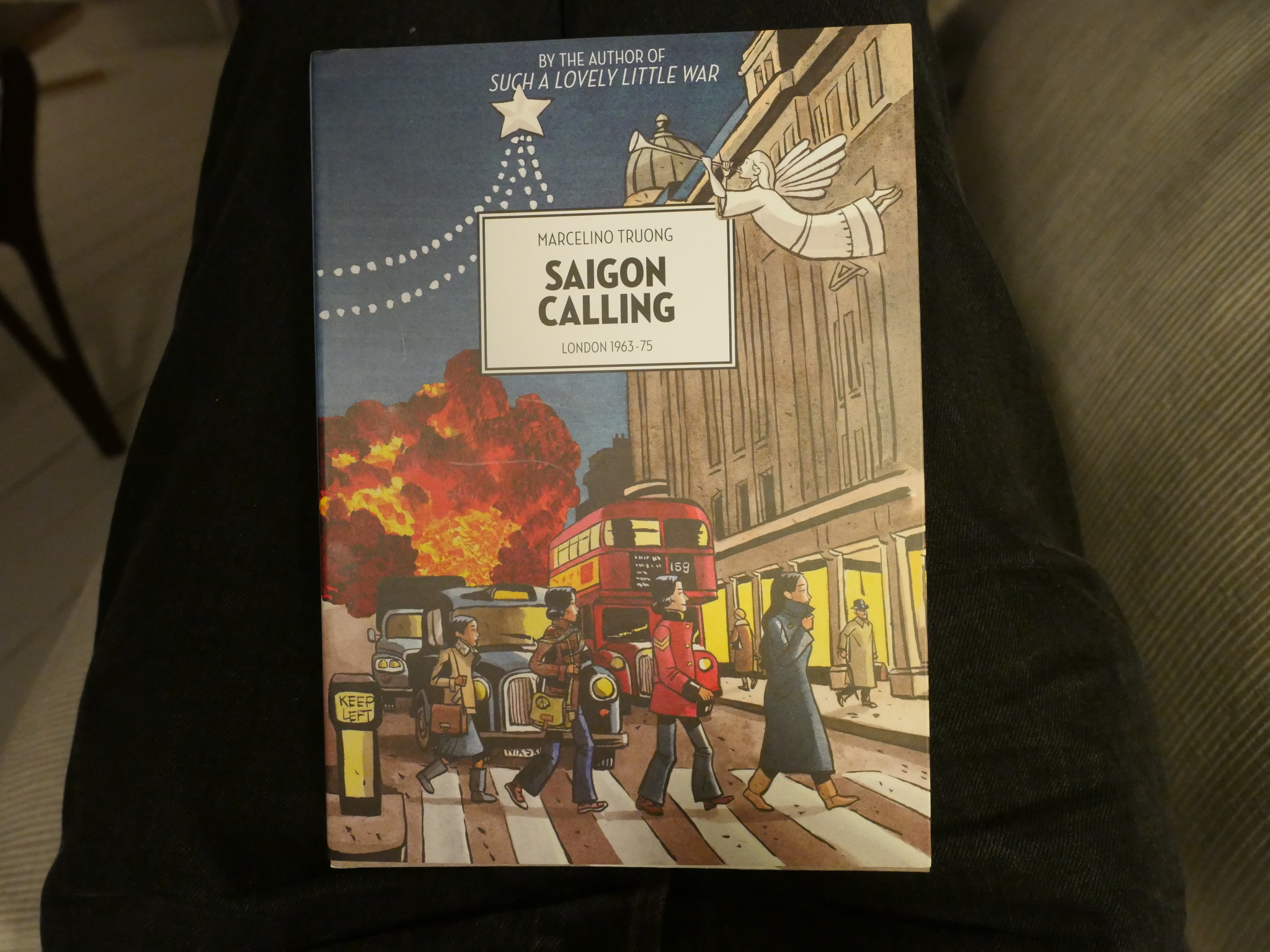 Well, perhaps this won’t be too bad… It’s not from Simon & Schuster or anybody, but instead a Canadian publisher I’ve never heard of before. 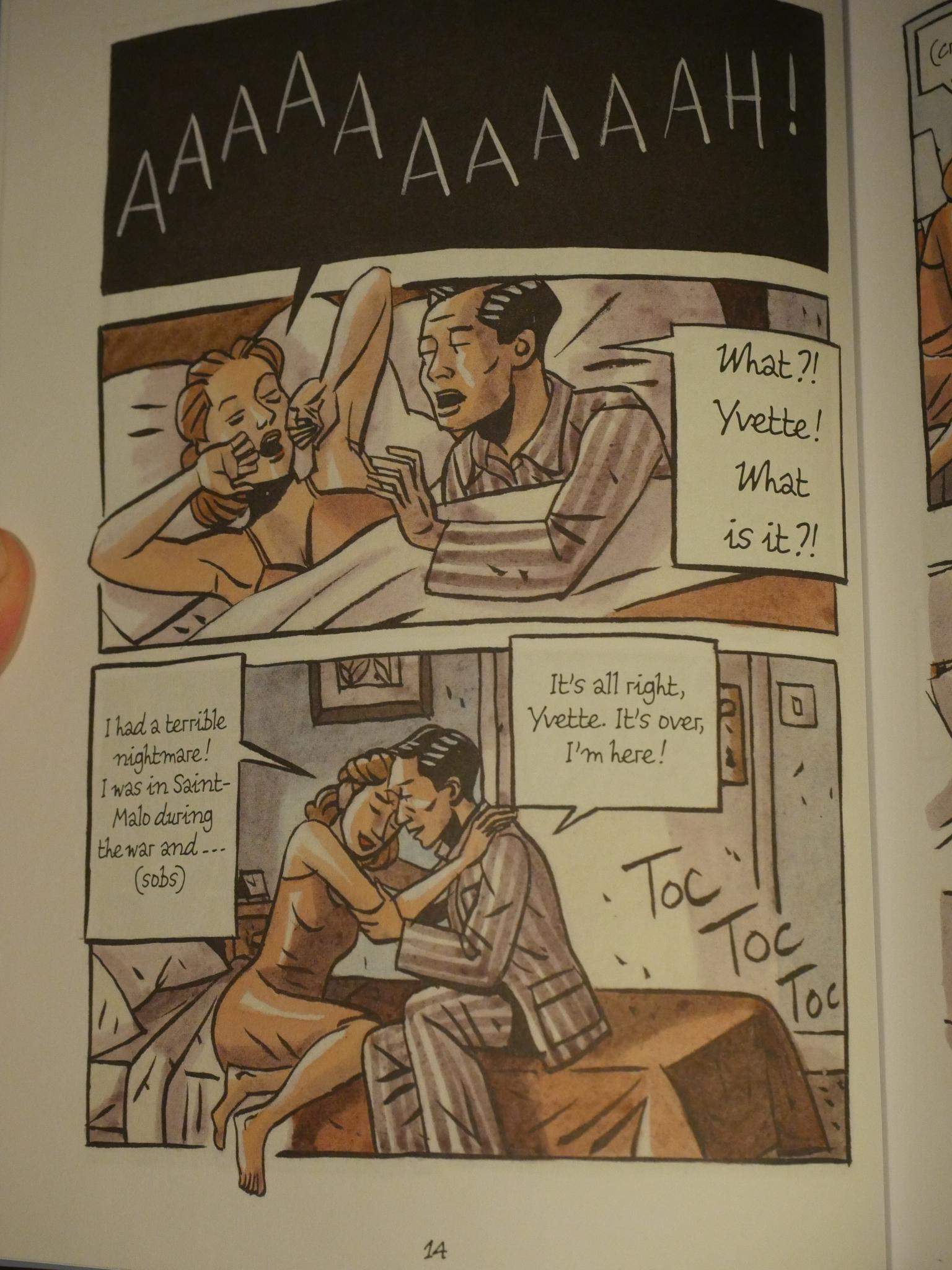 But it is bad. Very bad. That’s not Yvette yawning and stretching contentedly, but instead she’s waking up from a nightmare, like people do, screaming. 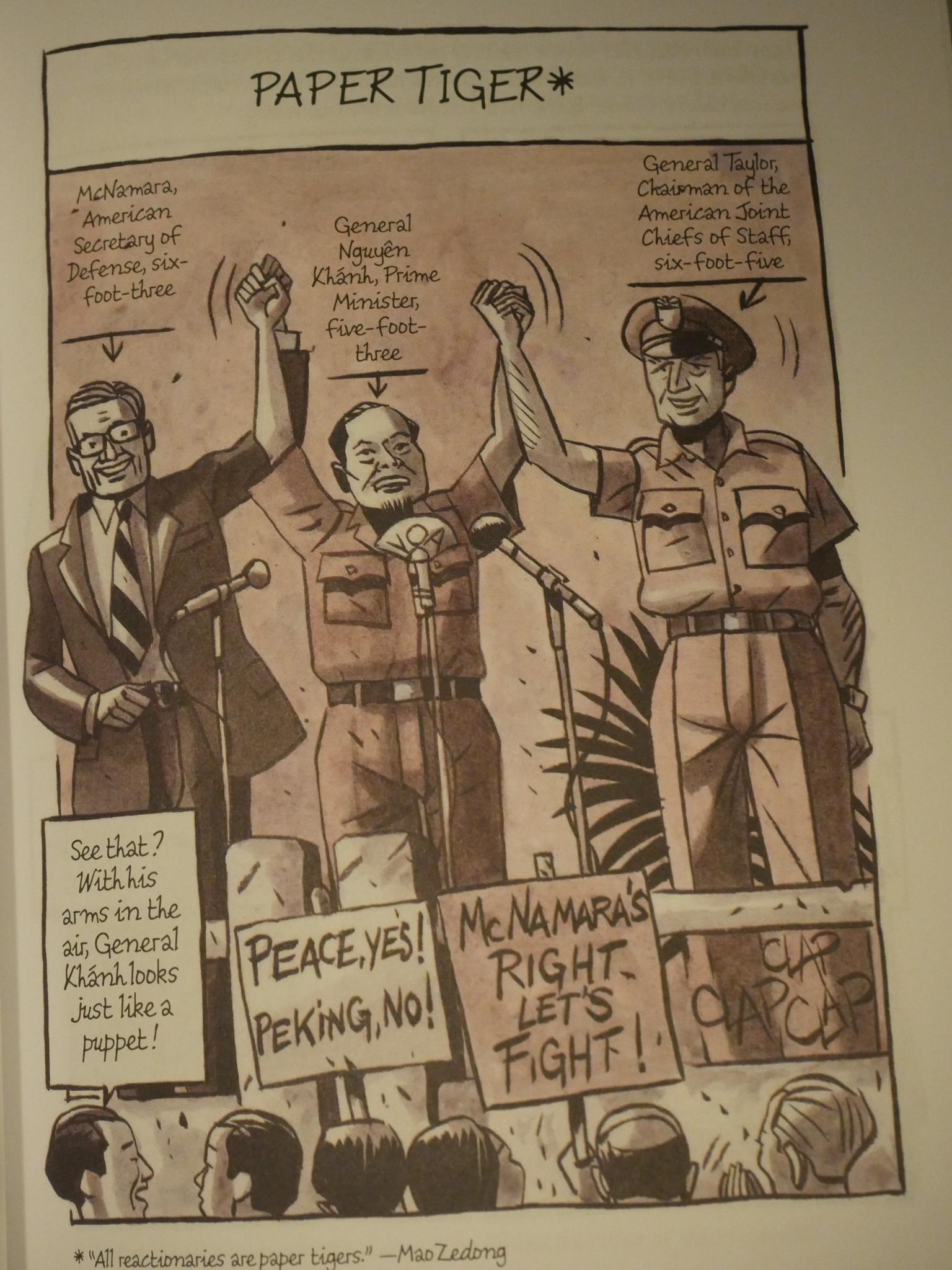 It’s about the Vietnam war, and it’s badly constructed. Most annoying of all is the way the author repeats the same basic anecdotes. “Puppet.” 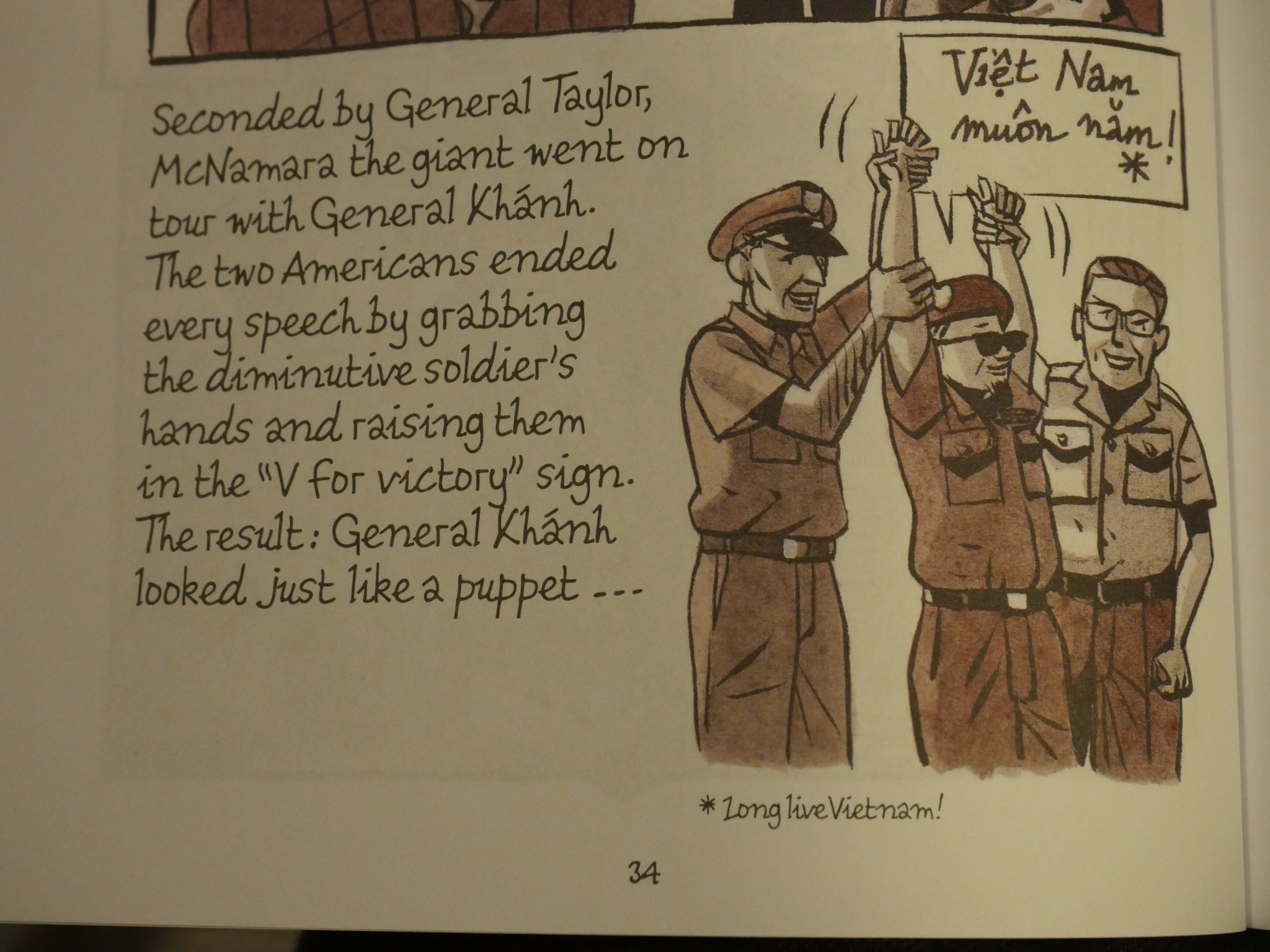 Then a few pages later: “Puppet”. He does this (with different anecdotes) about half a dozen places, which leads me to believe he wasn’t really paying much attention himself while making this book.

But the art is nice enough, and the story itself isn’t that bad. 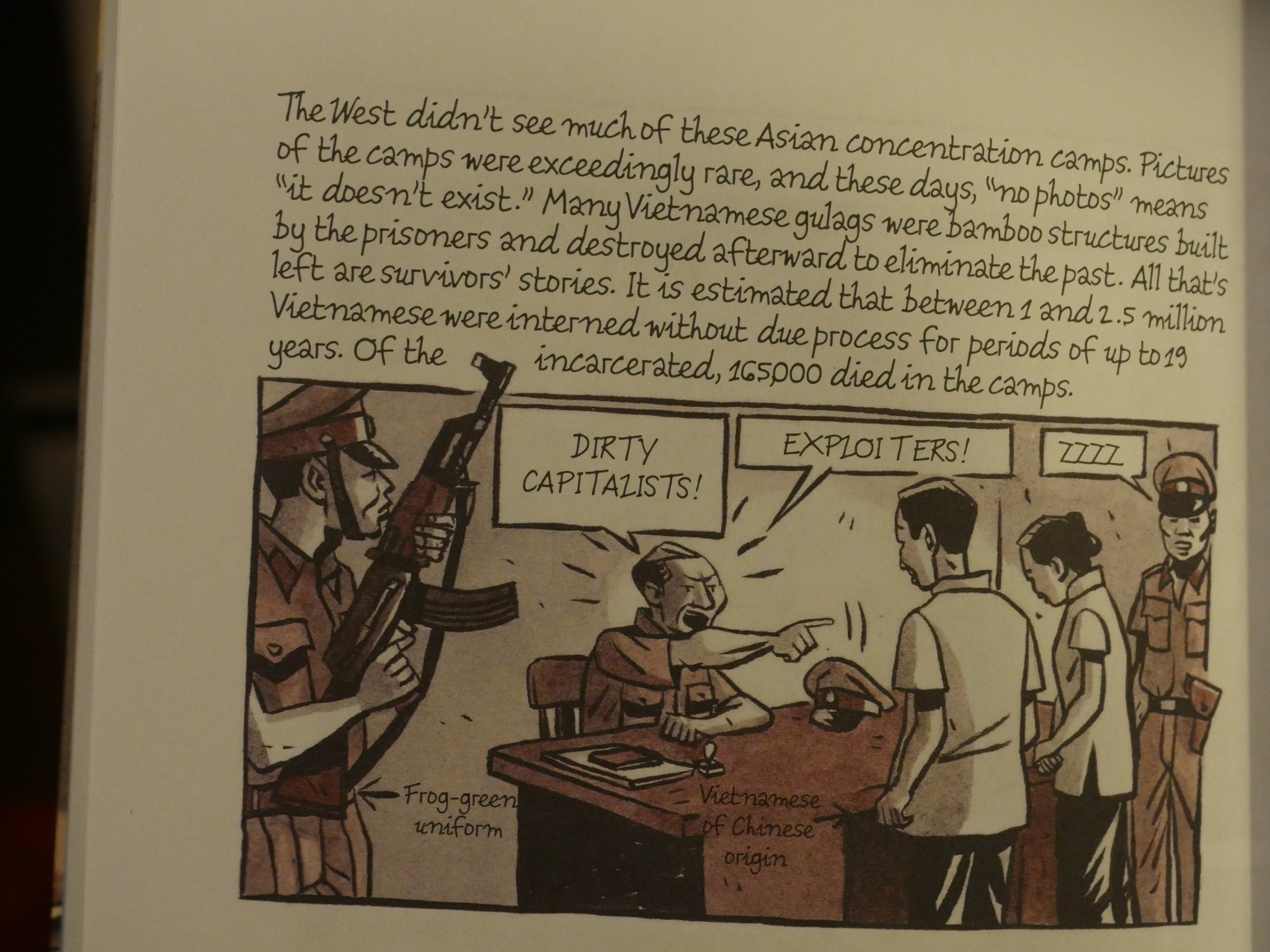 I know nothing about this war, and he’s probably right in all the numbers he’s giving, but there were so many places where I was thinking “but is that a lot or a few”? If you have 2.5 million people incarcerated for 19 years, and only 165 thousand people die during that time, then that must be an awesome concentration camp with an excellent medical staff, because that death rate is half the natural one.

I know, he said “up to” on both those numbers, but it’s just bad propaganda to present us with such a weird set of numbers. 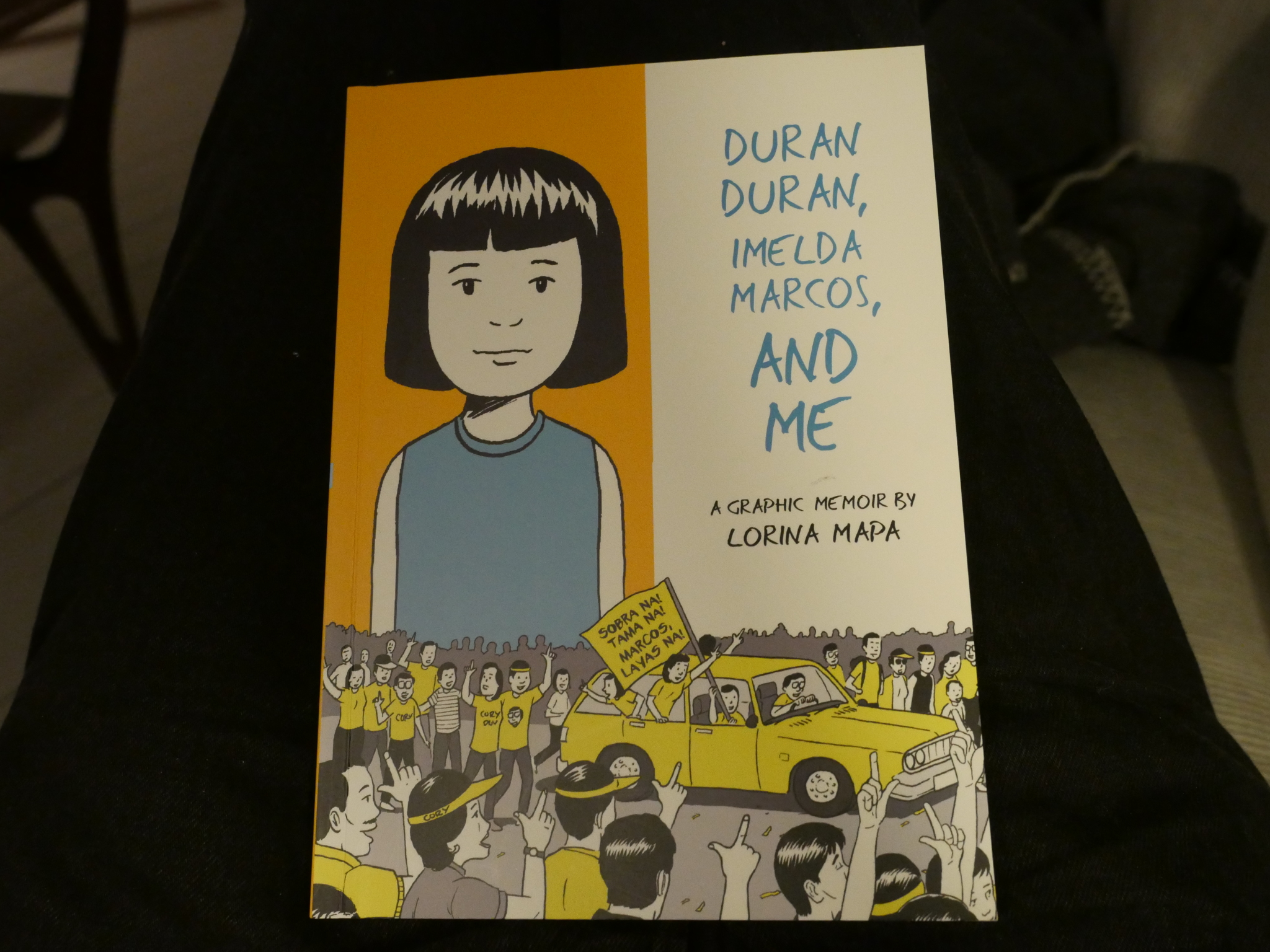 This one can’t be that bad! It’s from Conundrum Press, another Canadian publisher who’ve published a lot of good stuff. And the name is kinda funny. 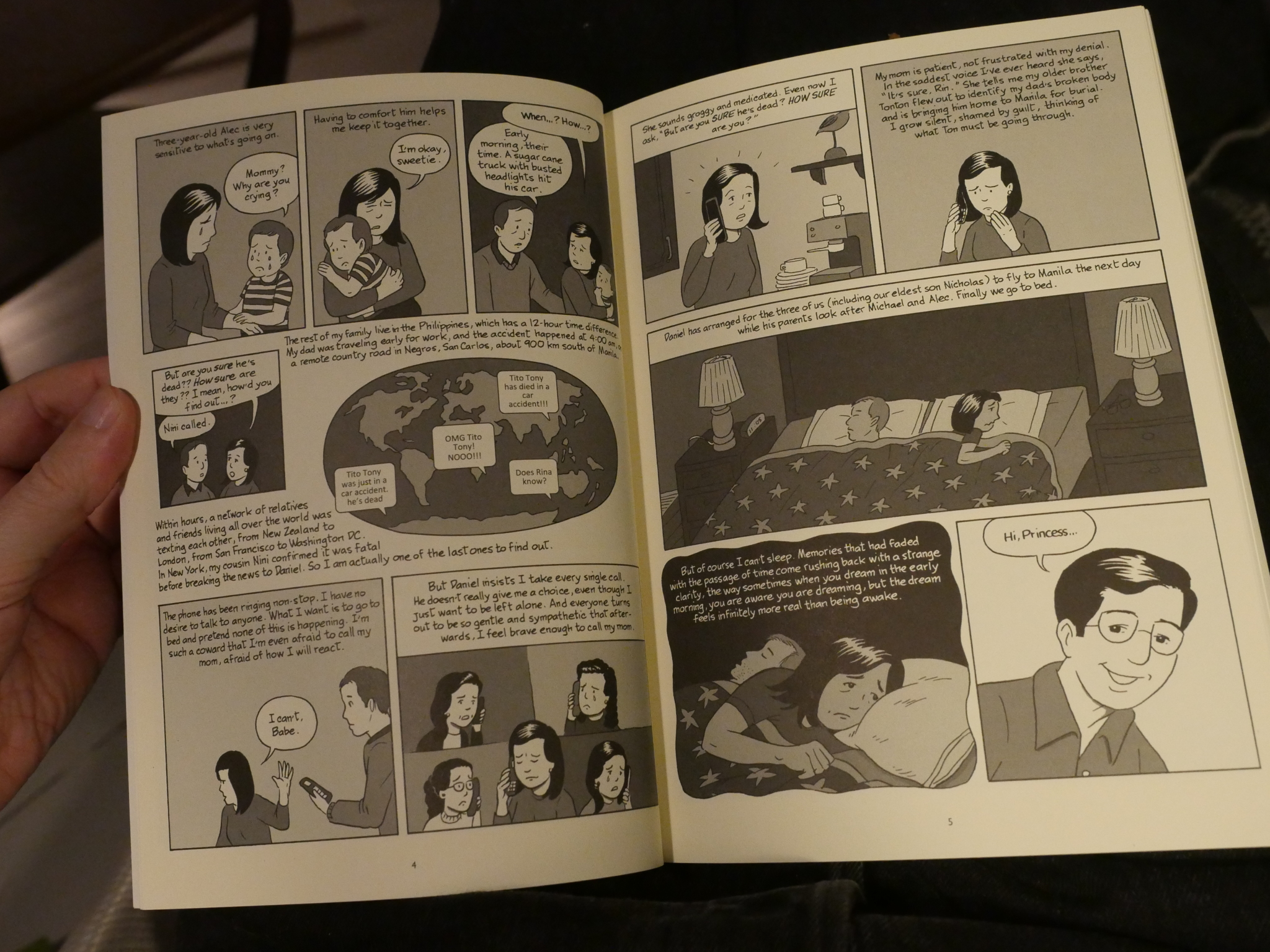 Uh-oh. The artwork is super-basic. The faces and figures are passable, but it’s just so dreary to look at. The gazillion different grey-tone backgrounds just makes everything blah.

It’s also super-wordy and uses an annoying typeface. It’s technically good (lots of variation in the letter forms so that it looks less mechanical), but it’s still not pretty. 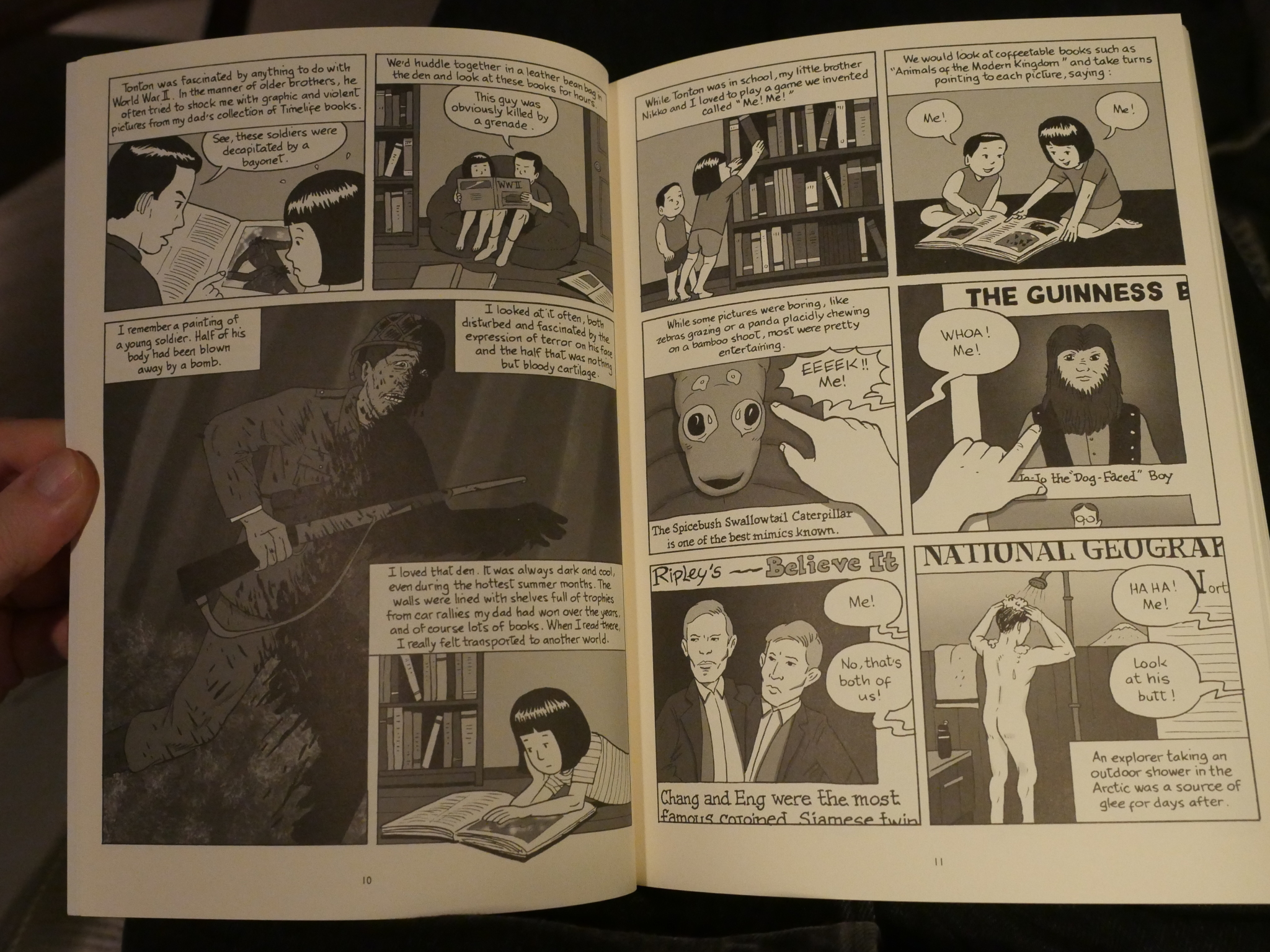 The bits that work in this book are the reminiscences from the author’s childhood. Lots of funny and sweet anecdotes. Perhaps a bit treacly at times, because she doesn’t leaven the sweetness by any realness. Apparently she had the greatest family ever in the history of great families. And good for her. 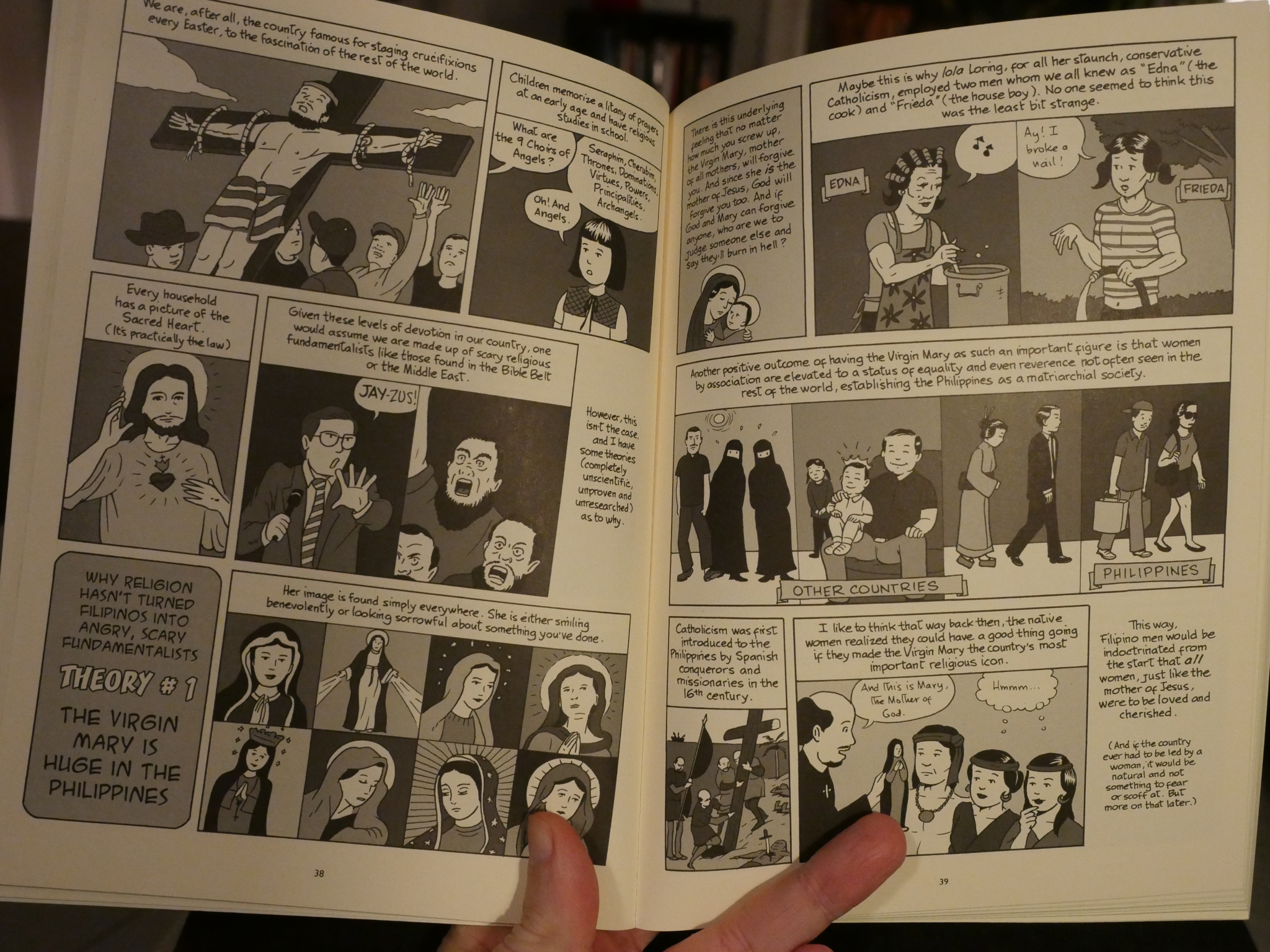 The bits where she tries to conform to the possible journalistic comics fad are less successful. She explain so much about the Philippines, and … nothing ever sounds convincing. Here she explains that while her country is super-duper religious, it’s still awesome because the people there are just so great. 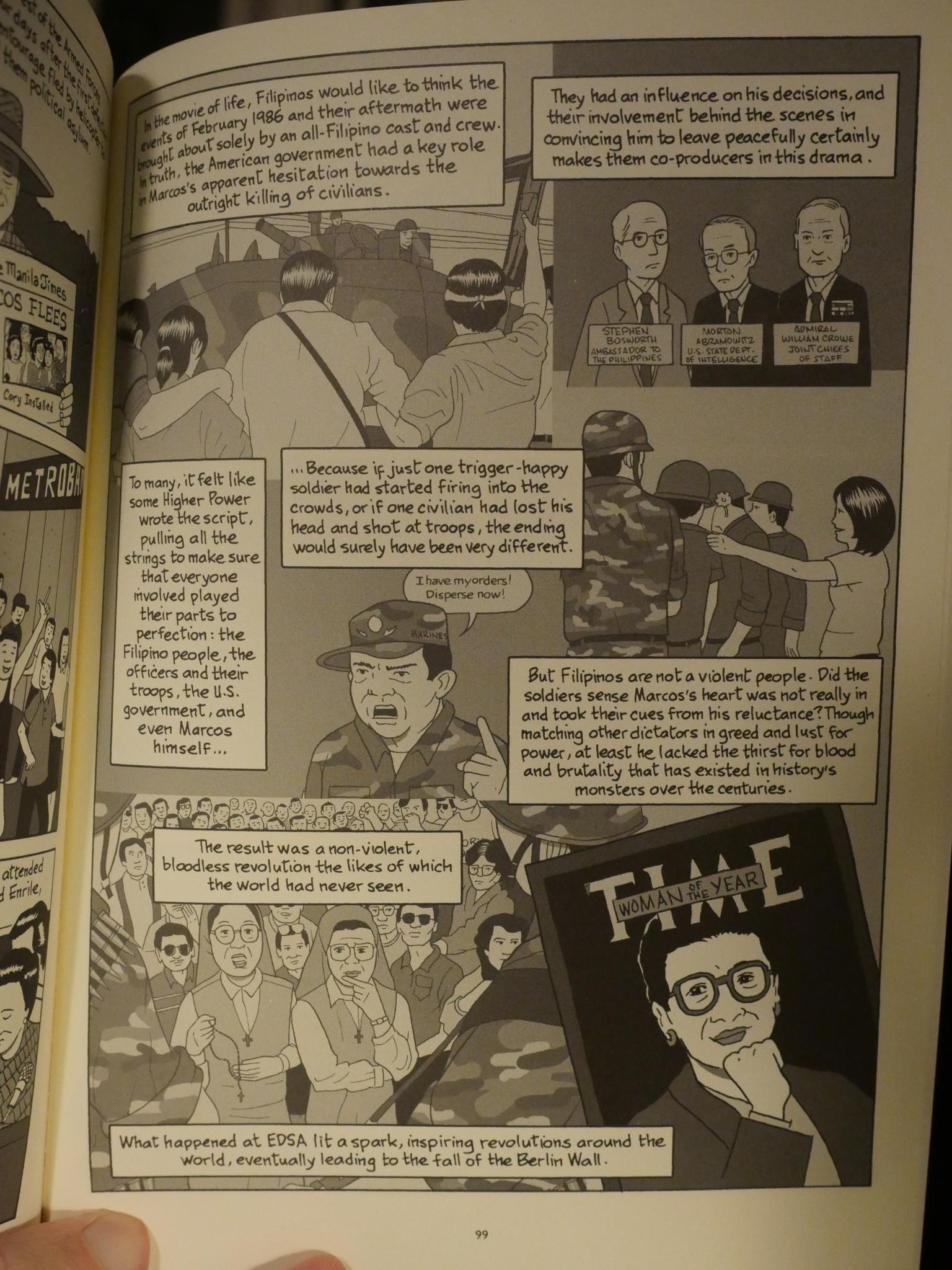 And did you know that the sorta peaceful overthrow of Ferdinand Marcos was the thing that led to the Berlin Wall falling later? Not many people are aware of that fact! 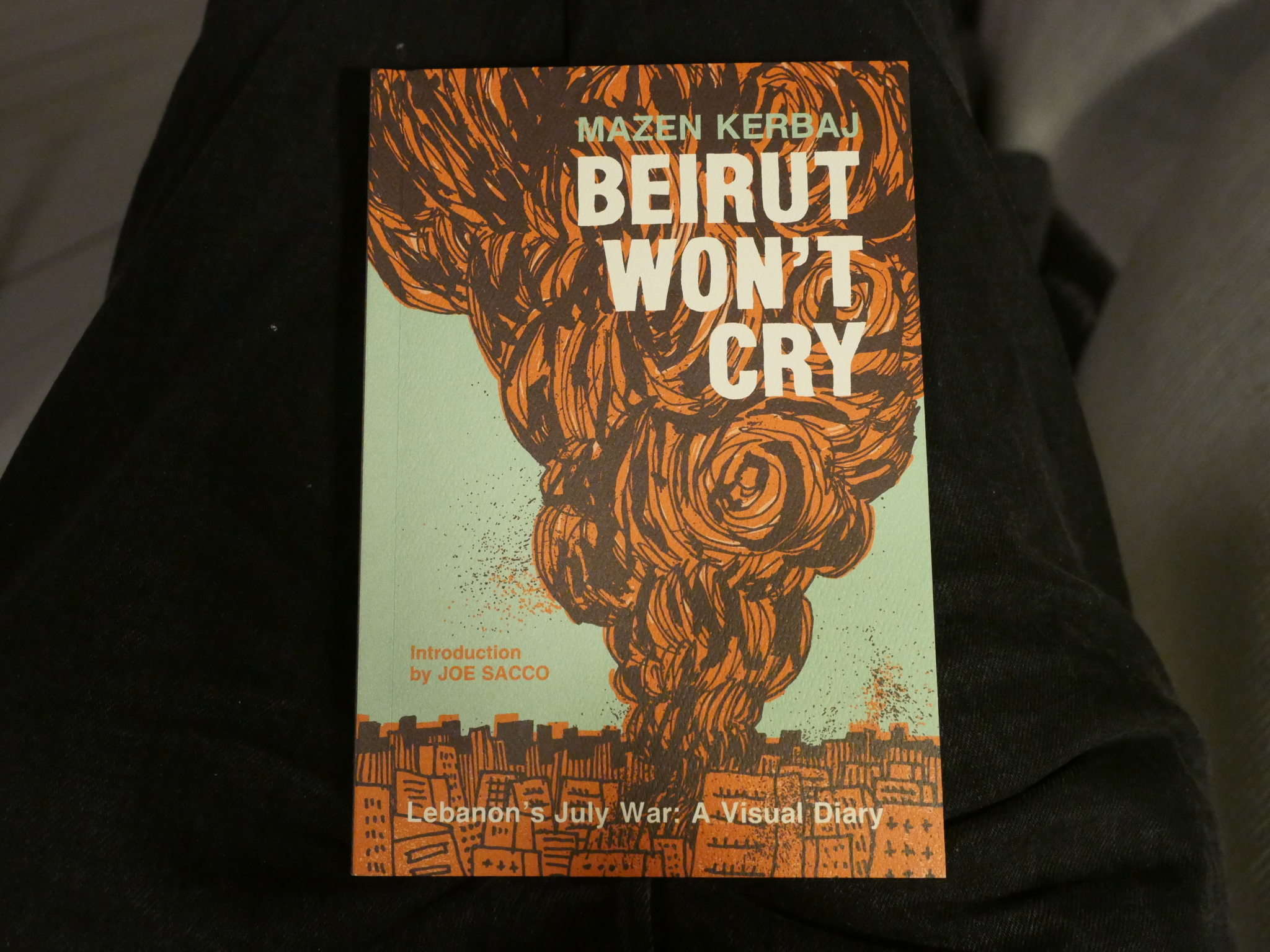 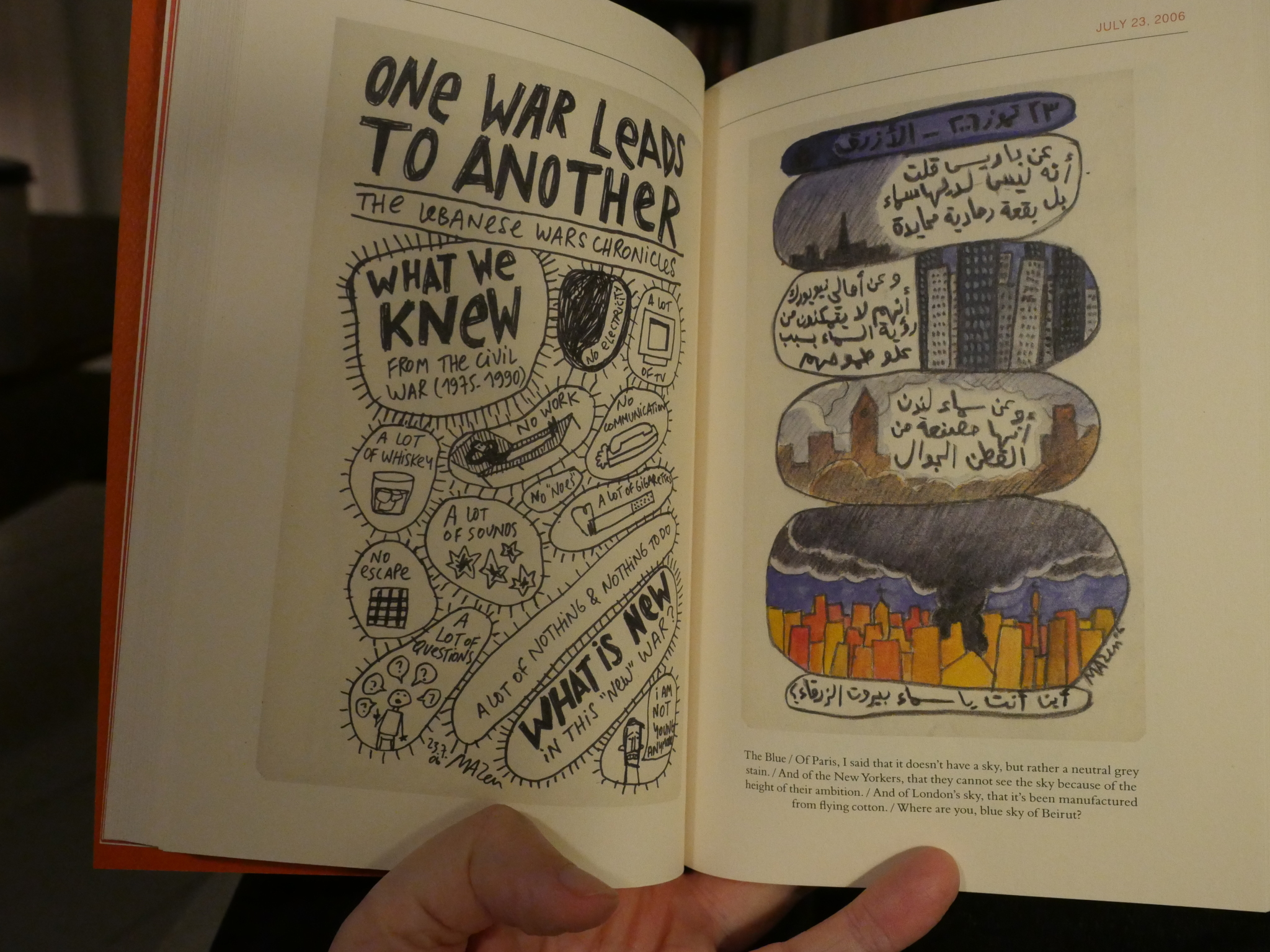 This book is not part of the possible current publishing fad. It just looked vaguely like it from the cover, and having an introduction by Joe Sacco didn’t help with that impression. 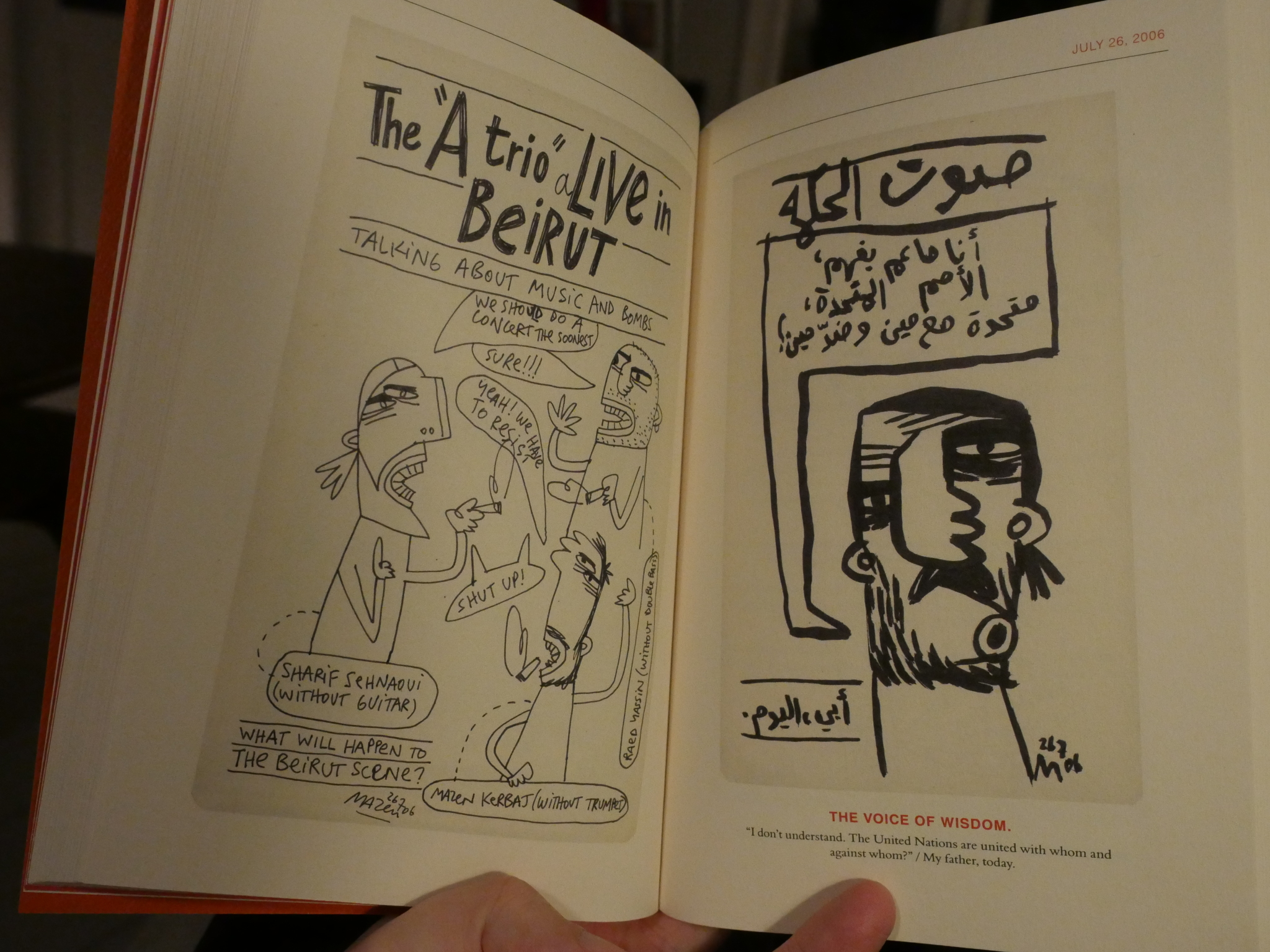 But this is a collection of blog posts Kerbaj did in 2006 while Israel was bombing Beirut. So chronologically it doesn’t work for my hypothesis at all, and it’s not even a comic book.

It’s really good. It’s very angry and angsty (as it should be), and seems very raw and true. It’s quite interesting. I mostly enjoy Trondheim’s comics, and Drawn & Quarterly are usually pretty dependable. But this was apparently originally published in an app and on the Le Monde’s web site, which isn’t a very reassuring pedigree. And it’s a lot worse than I would have guessed. The artwork is basically pointless: It would have worked just as well as a podcast where somebody just read the captions. It’s not that the anecdotes she tells are that bad, but they’re sometimes trite (the “refusing” thing which I think is now compulsory to have in any book about the Middle East (to the left)) and sometimes just tedious (recounting the many, many upheavals in Iraq, mostly in no particular order (to the right)). We very seldom get pages like this: The spread kinda works. It’s funny and surprising. Yes, you could just have told the punchline in the hypothetical podcast and it would have been almost as funny, but let’s be generous here. 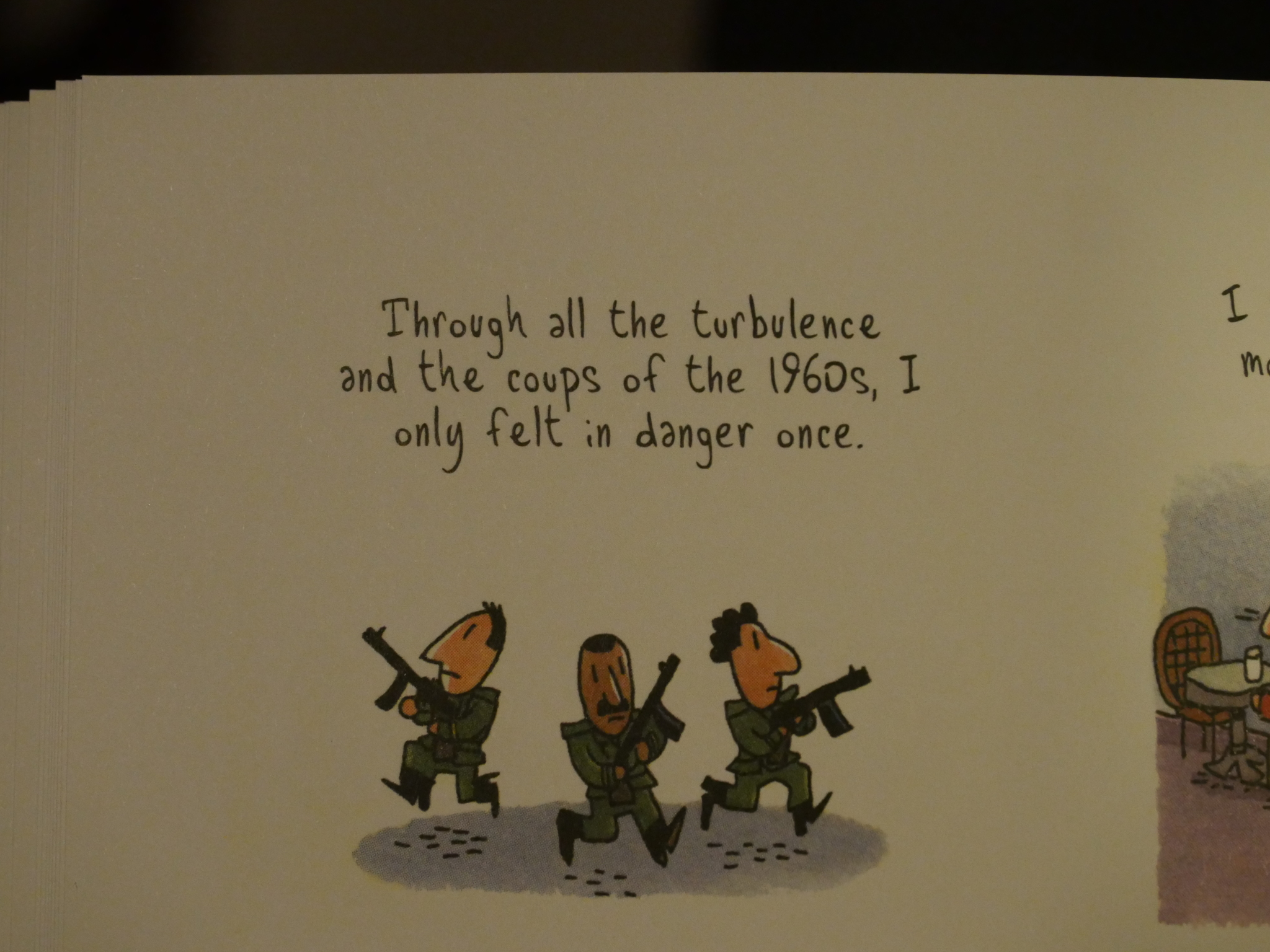 And variations on this, which Trondheim uses to illustrate various troop movements, is very cute.

But is it a good book, or part of a publishing strategy? I think the latter. So to sum up my findings: I think it’s likely that we’re seeing the first wave of an onslaught of these books. I don’t know what the publishing category will be called yet… “Conflict cosies”? “Comics autojournalism”?

And I predict that all these books will be getting glowing reviews in all major outlets.  Let’s see…