I bought a lot of stuff from the PictureBox sale. I kind of thought that I had most of their stuff already, but I ended up with like eight kilos of excellent comics.

Then there’s Last of the Mohicans by Shigeru Sugiura, edited by Ryan Holmberg. 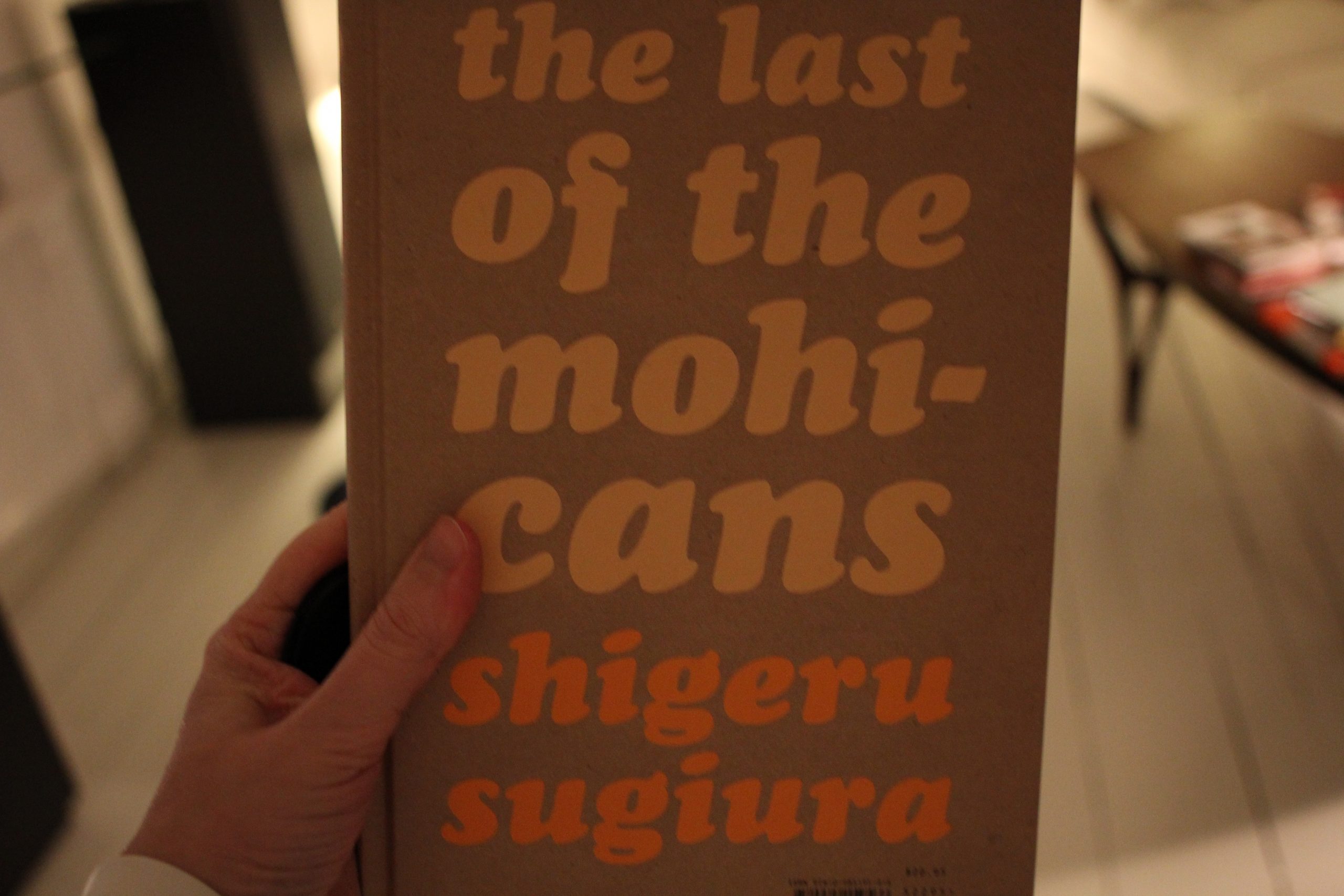 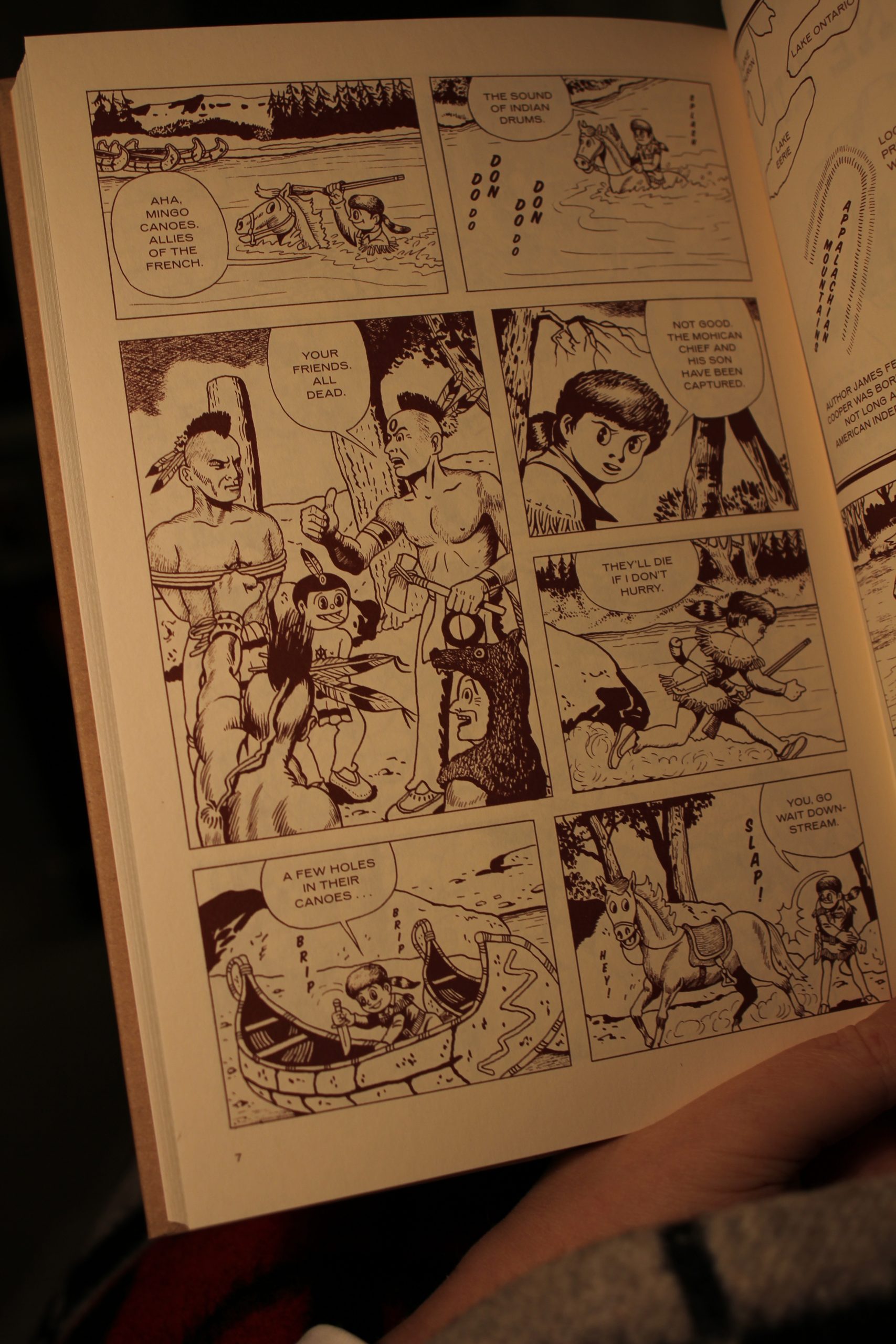 So…  this seems to be pretty crude.  The story is totally unreadable, but the drawings have a certain charm.  But what’s really going on here?  You have one Indian tied up there, and there’s a smiling boy who has his tongue sticking out…  Is he captured, too?  It turns out that he is. 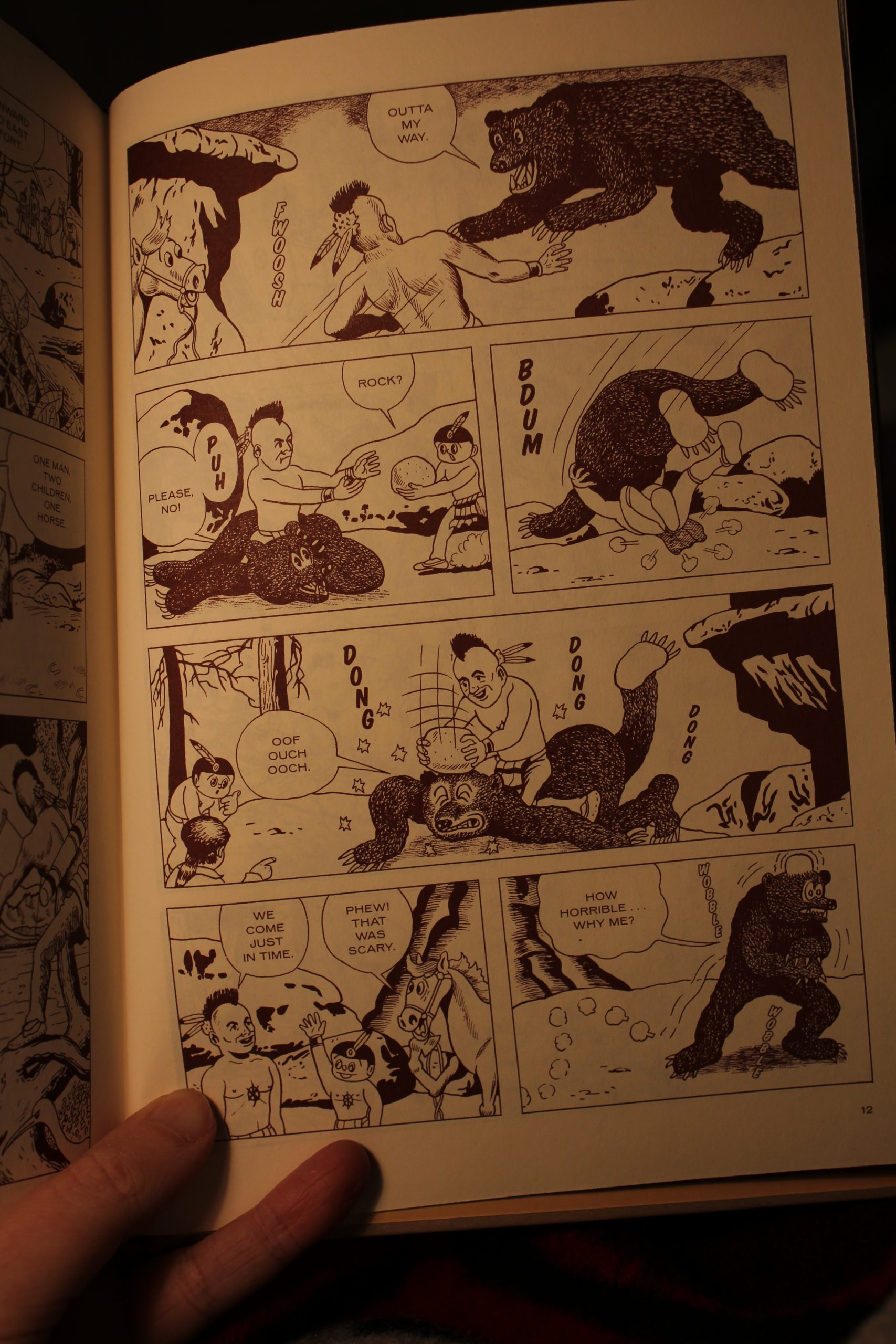 They escape and fight a bear…  Ok…  Looks a bit like something a 14-year old would have drawn after watching too many cartoons.  (I had just read the Rory Hayes book.) 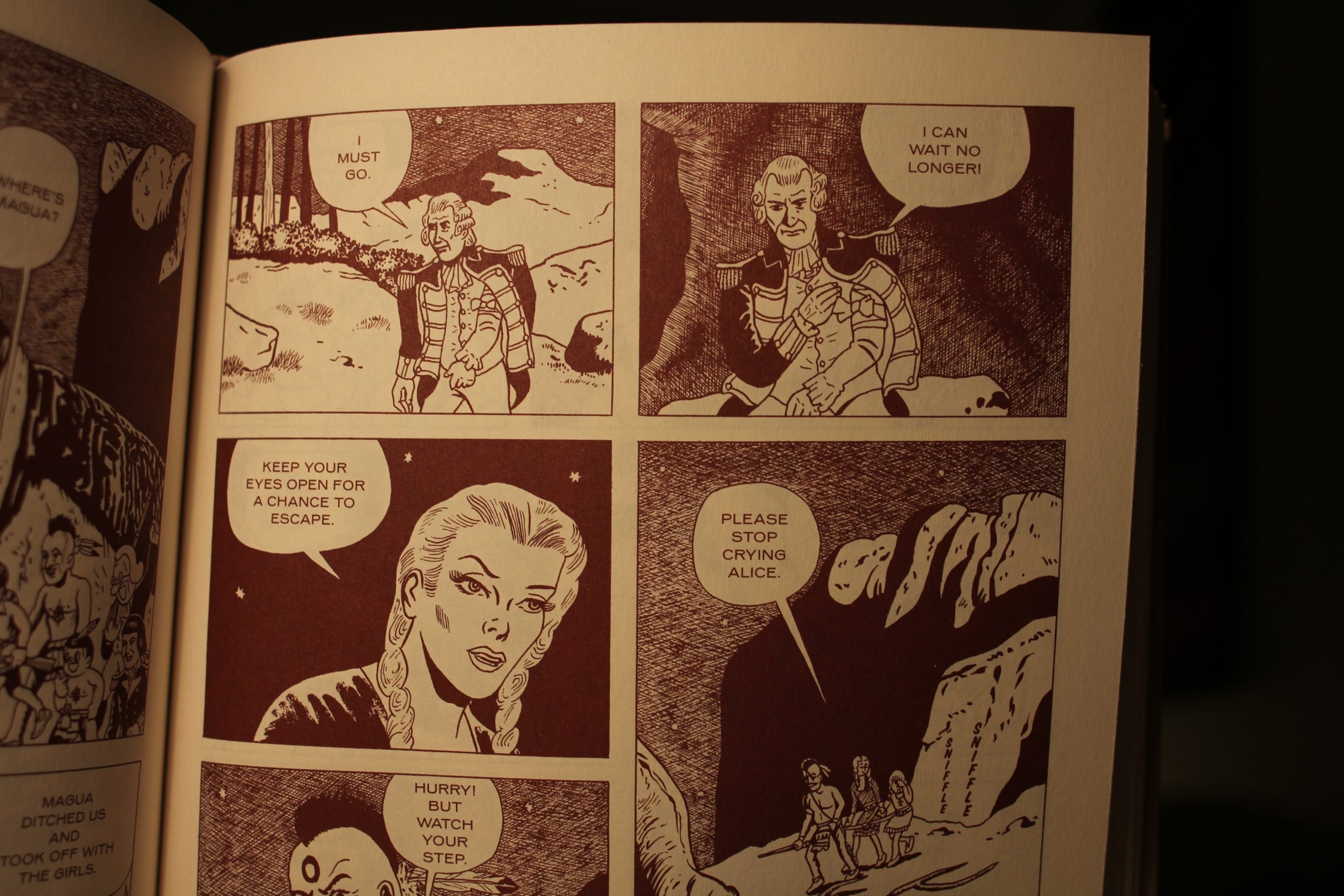 Or perhaps too much Li’l Abner?  Anyway, it’s pretty dull book, incompetently drawn.  So I start reading the introduction. 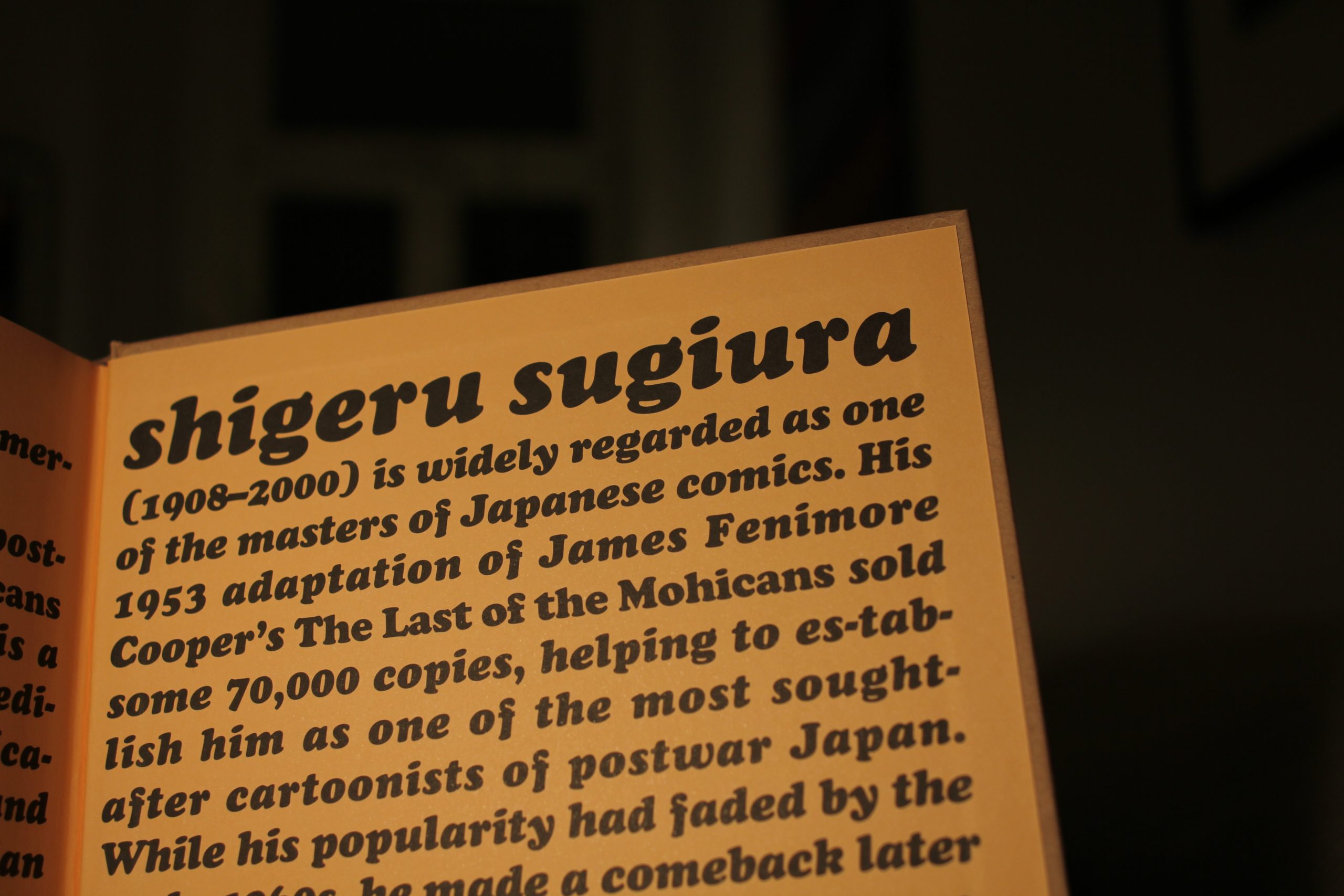 “One of the masters of Japanese comics.”  Uh huh. 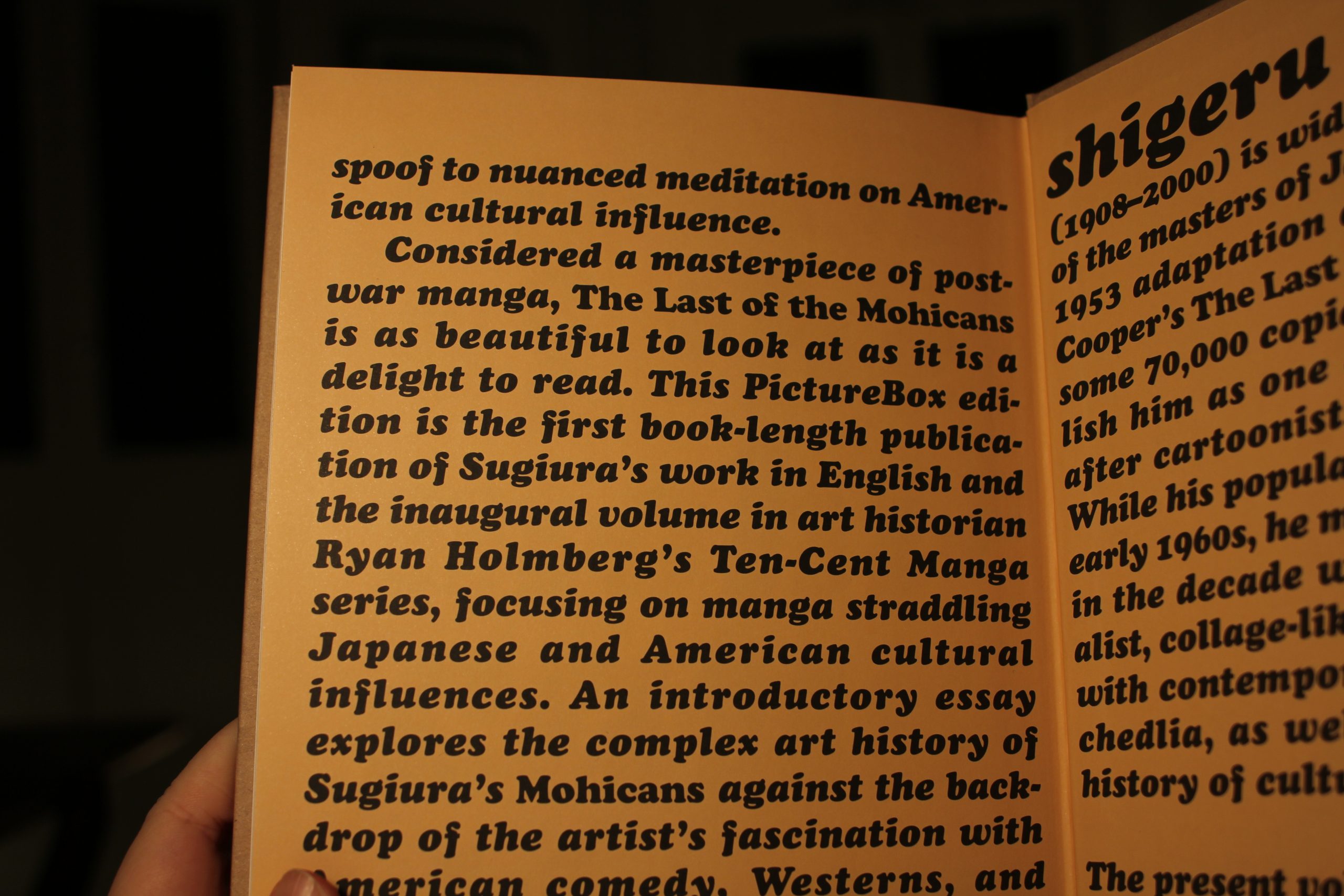 “is as beautiful to looks at as it is a delight to read.”

I guess that’s technically true, because it’s nigh unreadable and it’s rather ugly.

Now, you wouldn’t expect an editor to undersell the book in the introduction.  If he’d written the truth (something more along the lines of “a turgid mess that some might say is historically important, because it shows how much early Japanese comics ripped off contemporary US comics.  INTERESTING FOR COMPULSIVES ONLY”) you might sell fewer books.  Hyping the work as a “masterpiece of post-war manga” might lead to some disappointment, though.

Which leads me to the point of this rant: For almost fourty years, we’ve suffered through the same hype.  We’ve been told, over and over again, that there’s a vast treaure trove of Japanese comics out there, and when they’re finally translated, we’ll be overwhelmed by masterworks.

Japan is the land where, we’re told, businessmen read comics on the Shinkansen.

What they neglected to inform us is that the businessman was reading Shonen Jump and Dragon Ball.

Some people just adore Japanese comics.  That’s fine.  There are adults that like superhero books, too.  I don’t judge.  But fans of Japanese comics are more annoying.  Every time somebody in the US writes an overview of any comics genre, or makes a top ten list of whatever, you can be sure that some Japanese comics fan pops his or her head up and starts complaining about the lack of Japanese comics on the list, and whines about provincialism.

Superhero fans whine, too, but nobody takes them seriously.  The reaction to the persistent whine from otaku is an embarrassed shuffling of feet while they promise to do better next time.

Why are most Japanese comics awful?  I don’t really know — it’s a field ripe for investigation.  Perhaps it has something to do with the way the works are published?  The norm is for serialisation, and the deadlines and the interference from the editorial staff can be (according rumour) fierce.  Is it because of the widespread system of using assistants?

Are Japanese comics, on average, worse than US comics?  I think it’s difficult to claim that Parasyte is worse than Geoff Jones’ Green Lantern (difficult to make a distinction when things are that bad), but Finder is better than Planetes. C’mon.

There are good comics being made in Japan, of course.  To stay on the PictureBox circuit, Yuichi Yokoyama is amazing. And you can’t deny that Gengoroh Tagame is something, even if that something may be something you wish you hadn’t read.

But from the evidence provided us so far, there’s less of interest being made in Japan than (say) Italy, to take a country at random.

Of course, there are more Japanese masterworks to be unearthed!  One day, somebody somewhere will finally find the hidden treasure trove of Japanese comics, and then all us unbelievers will finally see the truth!  Oh joy!