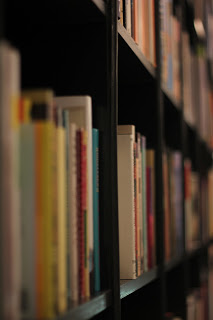 I have the worst memory.

But even so, I pretty much manage to remember what books I’ve read.  If I’ve read Anagrams by Lorrie Moore, I remember that.

The problem is with the less (how to put it?) good books.

I read a lot of crap.  Crap that I like, but it’s crap.  Book after book of entertaining, but not really essential books.

For instance, I’m now reading No Cooperation from the Cat by Marian Babson.  It’s amusing, quite decently written and is a pleasant read.  It’s ostensibly a mystery novel, but people mainly stand around talking wittily to each other while they cuddle cats.  And then somebody’s going to die or something, I’m guessing.  The suspense!

She has previously written books like The Company of Cats, To Catch a Cat, The Cat Next Door and Even Yuppies Die.

I have absolutely no idea whether I’ve read those books or not, but if I haven’t, I want to.  And there’s the problem. 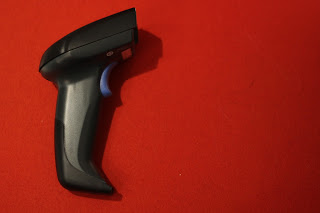 My books are kinda organised on the shelves, so I can pretty much find any book if I look at four separate locations where a book is likely to be.  Unless I’ve recently read it.  Then there’s no hope, because it’ll be in the “just-read” stacks.

So I thought: Perhaps I should just enter all the Marian Babson books into a database of sorts, and then just buy all the ones I haven’t read in one fell swoop.  I like fell swoops.

And then I thought that that sounded kinda boring, so perhaps it would be an idea to have a bar-code scanner, and enter the ISBNs that way.

But then I needed to look up the ISBNs via some API, so that I could see that the book is look-up-able.

And then I thought that I might as well just scan all the books.  But then I needed to have a routine going where I would scan newly bought books to.

You can see where this is going.

I wrote an Emacs ISBN interface and book database thingie: Bookiez, and a bought a wireless barcode scanner, so that I don’t have to bring the books to the computer to enter them into the database.

I also set up the computer so that the data from the scanner goes directly to Emacs so that I don’t have to futz around.  I can just grab the scanner, point it at a book, and then it’s registered, without me having to start the right program or put focus into the correct window.

Bookiez looks up the ISBNs via the APIs from Google Books, OpenLibrary, ISBNDB and LibraryThing.  (Phew.)  They all seem to have vaguely differing ISBN coverage, and the data quality is also…  varying.

Anyway, after scanning about a K of books, I’m really impressed with the Datalogic Gryphon D120 Barcode Scanner (aka. Datalogic Quickscan M2130).

The wireless range is fantastic (more than 20 meters), and the user interface is perfect.  When I scan something successfully, it beeps immediately, and when it transmits to the base station, it beeps, too.  So there’s never any doubt whether the scan was successful or not.  It does require you to hold it in a certain angle when scanning, but overall I think it’s a great device.  Nine thumbs up!

Not all books have ISBN barcodes, so I have to enter those by hand.  So I gaffa-taped a wireless keypad to my right thigh.  I can enter numpad stuff by touch-typing, and it makes a fashion-forward statement, as you can see.

The main annoyance when scanning is really the network latency when looking up the ISBN codes.  I’m looking at you, OpenLibrary.  But I’ve scanned half my books in a handful of hours, so it’s not too bad.

So now I can order some more Marion Babson books.  I don’t think I over-engineered this one at all.