I was reading an MC Siegler post linked to from HackerNews, where he rants about the iOS Gmail client and Google products in general:

And all of this is the M.O. of pretty much all Google iOS apps. They’re half-ass, buggy, and generally ugly to boot.

The obvious retort is “yeah, and Apple never released anything half-assed.  Right.”  But the thing is — he has a point.  Google releases stuff that kinda works.  And then they seldom give it any polish to take it past the “barely useful” level.

Look at Google Finance.  Just look at it.  In particular, look at that chart: 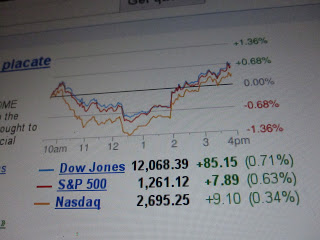 It’s obvious how that chart came to be.  Somebody was told “make the chart”.  They implemented it by finding the extremal point, and then drew a line at the halfway point, and then made it symmetrical by going the same distance the other direction.

And it’s total crap.  Nobody who has any pride in what they are doing would perpetrate something like that instead of doing it the hard way — finding the “pleasing numbers” (0.25, 0.5, 1, etc) that people can actually read. And then using those numbers on the lines.

That chart has been like that ever since Google Finance launched, many many years ago.

Having a crappy chart on one web page isn’t a catastrophe.  But it boggles my mind how the people responsible can look at that…  thing…  and not spend the half hour it would take to fix it.  For years on end.  This mild feeling of willthisdoitis typifies most offerings from Google. And I wonder why.

One thought on “Will This Do?”