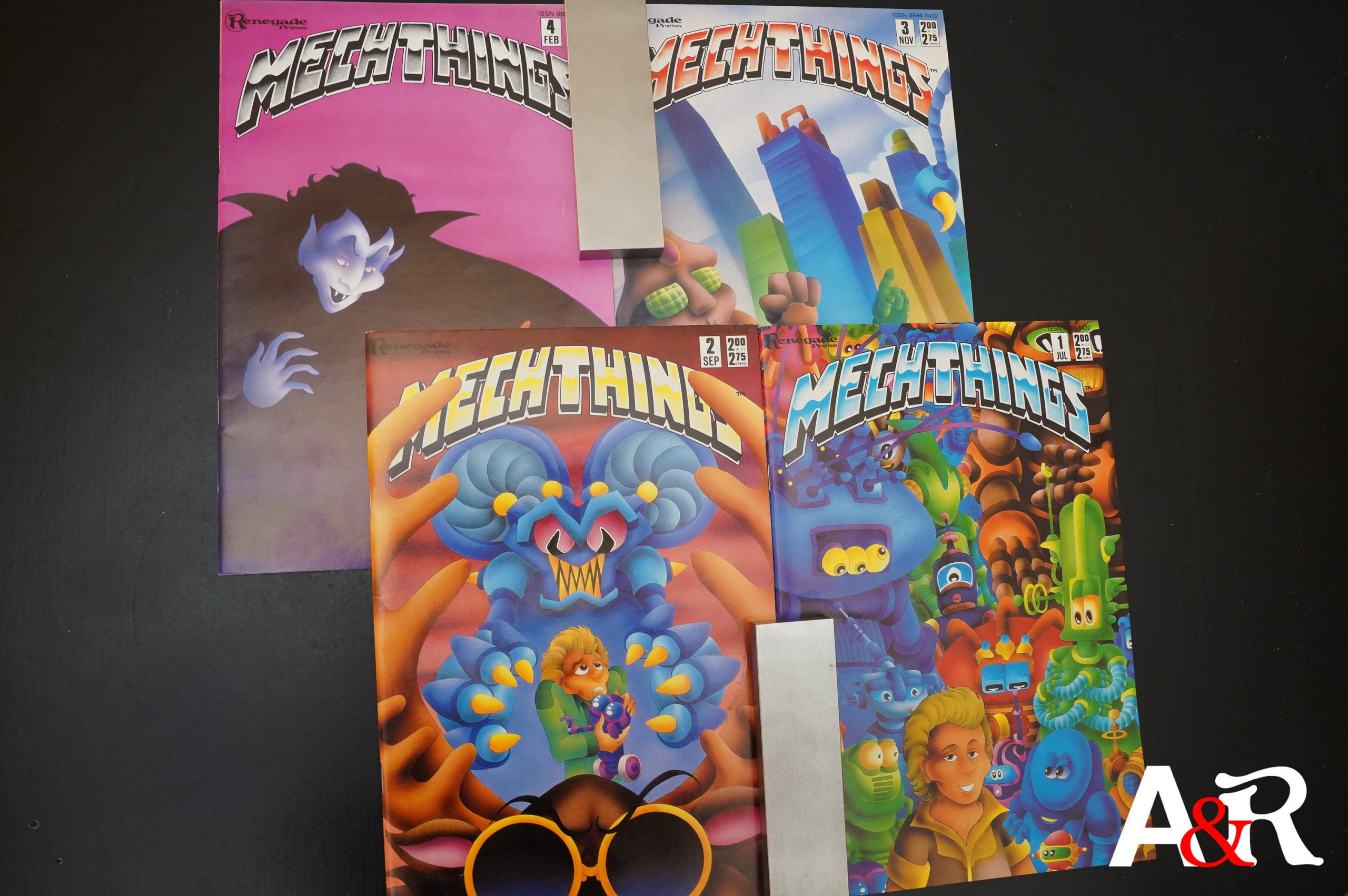 Oh, I remember him — Foster used to pop up in various small press anthologies all the time, and I like his artwork and zany humour. 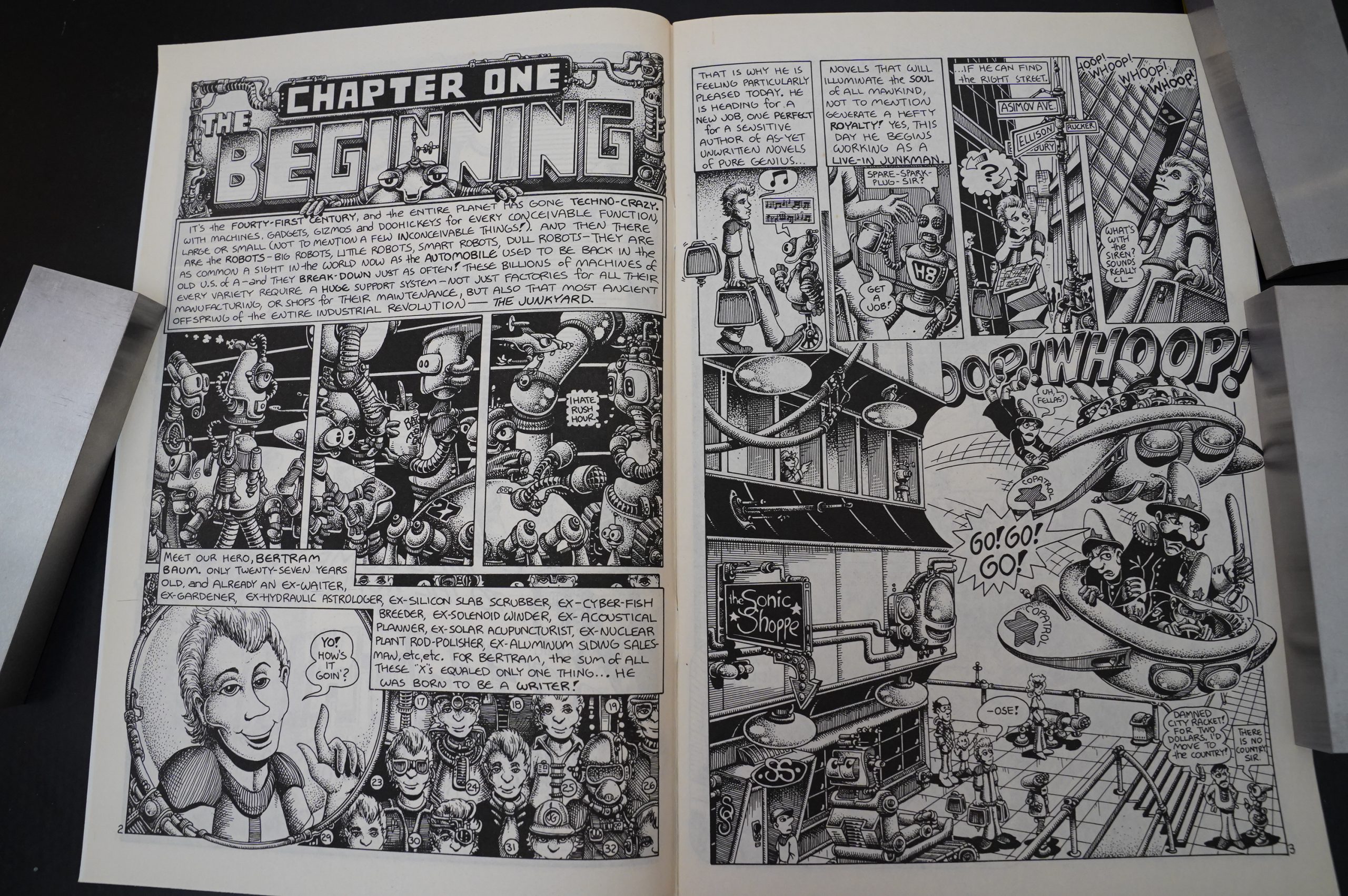 Well, the artwork is like I remembered it — it’s kinda… uhm… it reminds me of Howard Cruse (the stippling and the cuteness) and also Rick Geary, perhaps?

But what’s with all these chapters? Was this also destined for a comics anthology originally? Foster packs in so much background and backstory into the text here that it’s hard to pay attention. 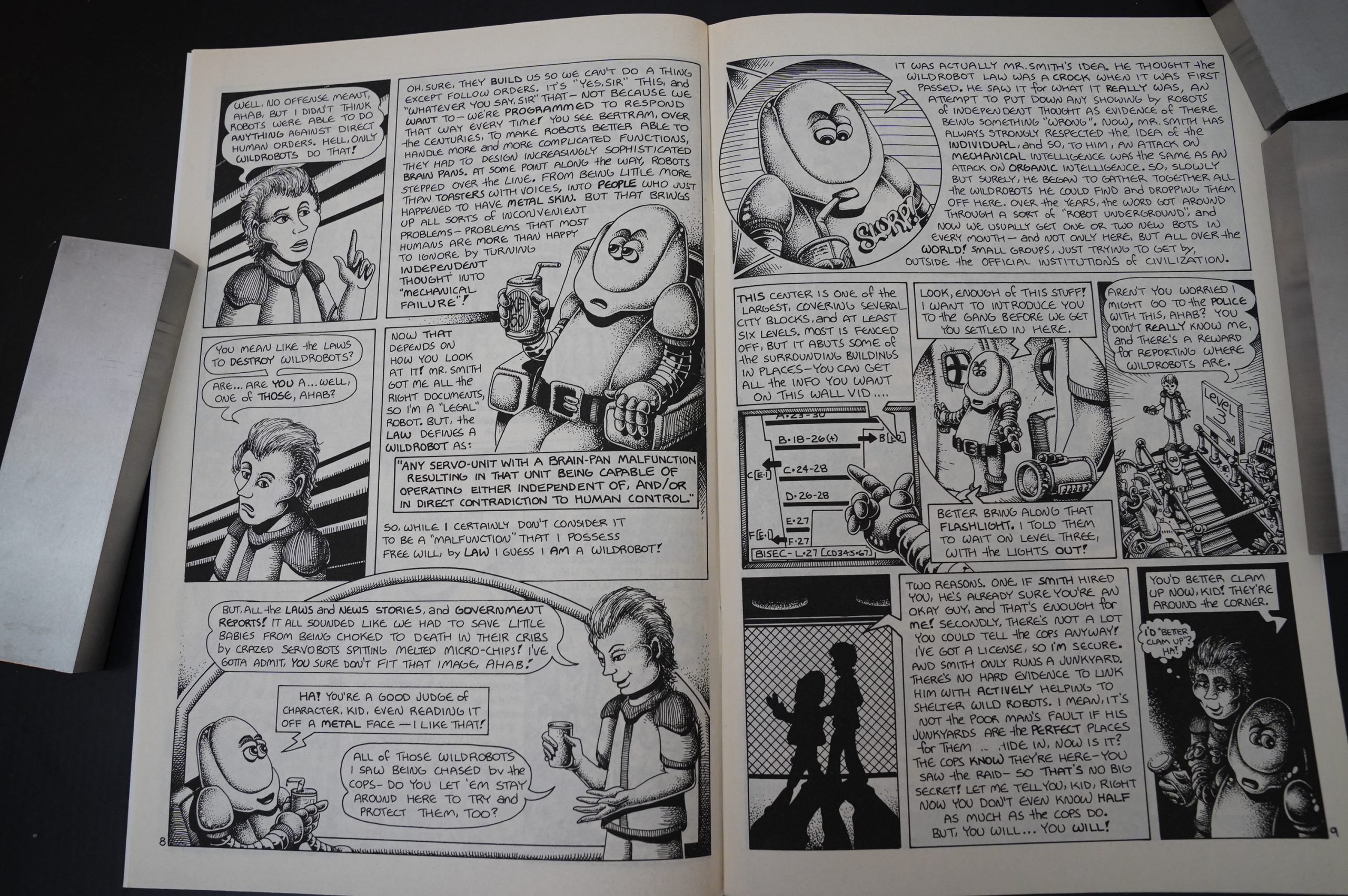 But oy vey. I read someone saying once that you should write down all the details and stuff about the sci-fi world you’re creating, so that you have a solid milieu in mind that you can draw from. And then you should chuck all that away.

Foster instead seems to have just written it down on the pages. And there’s really nothing here a reader has to know that couldn’t have been expressed in a couple of sentences: “Free-thinking robots are illegals, so we need you as a front human.” Hey! That’s only one sentence.

Well, OK, perhaps if he frontloads the issue this way with all the exposition, perhaps we can get all that out of the way and then all the zany adventures can start?

But no, it just goes on and on, and my own eyes are doing the same thing at this point. But then he runs out of pages. *phew* 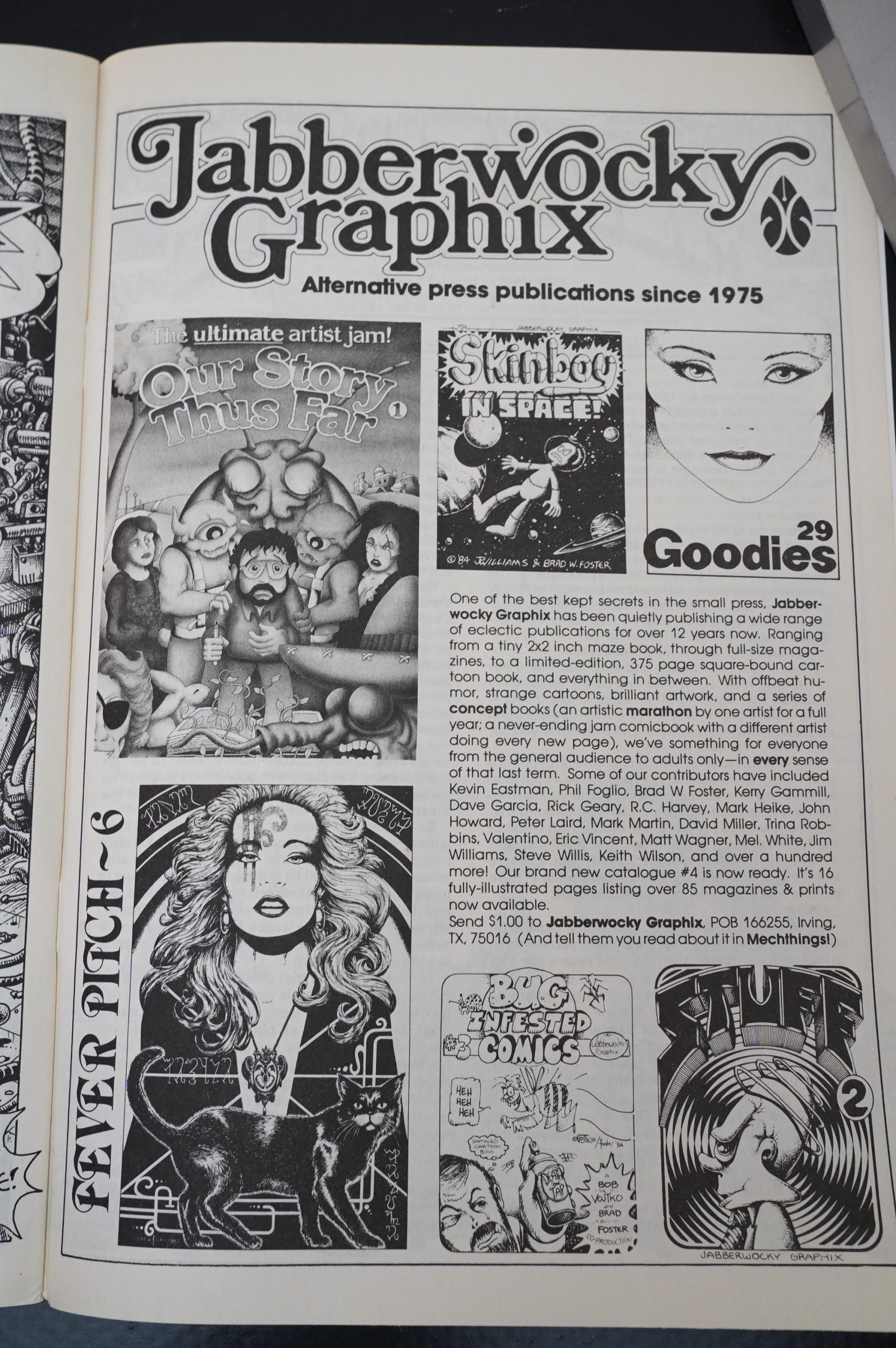 Jabberwocky Graphix! I remember them! Lots of minis and stuff… haven’t heard them mentioned in a few decades, though — it was stuff that wasn’t arty enough to be taken seriously, and not professional-looking enough for a mainstream audience.

Anyway, the first issue was excruciating, and I was about to give up on this series, but then… 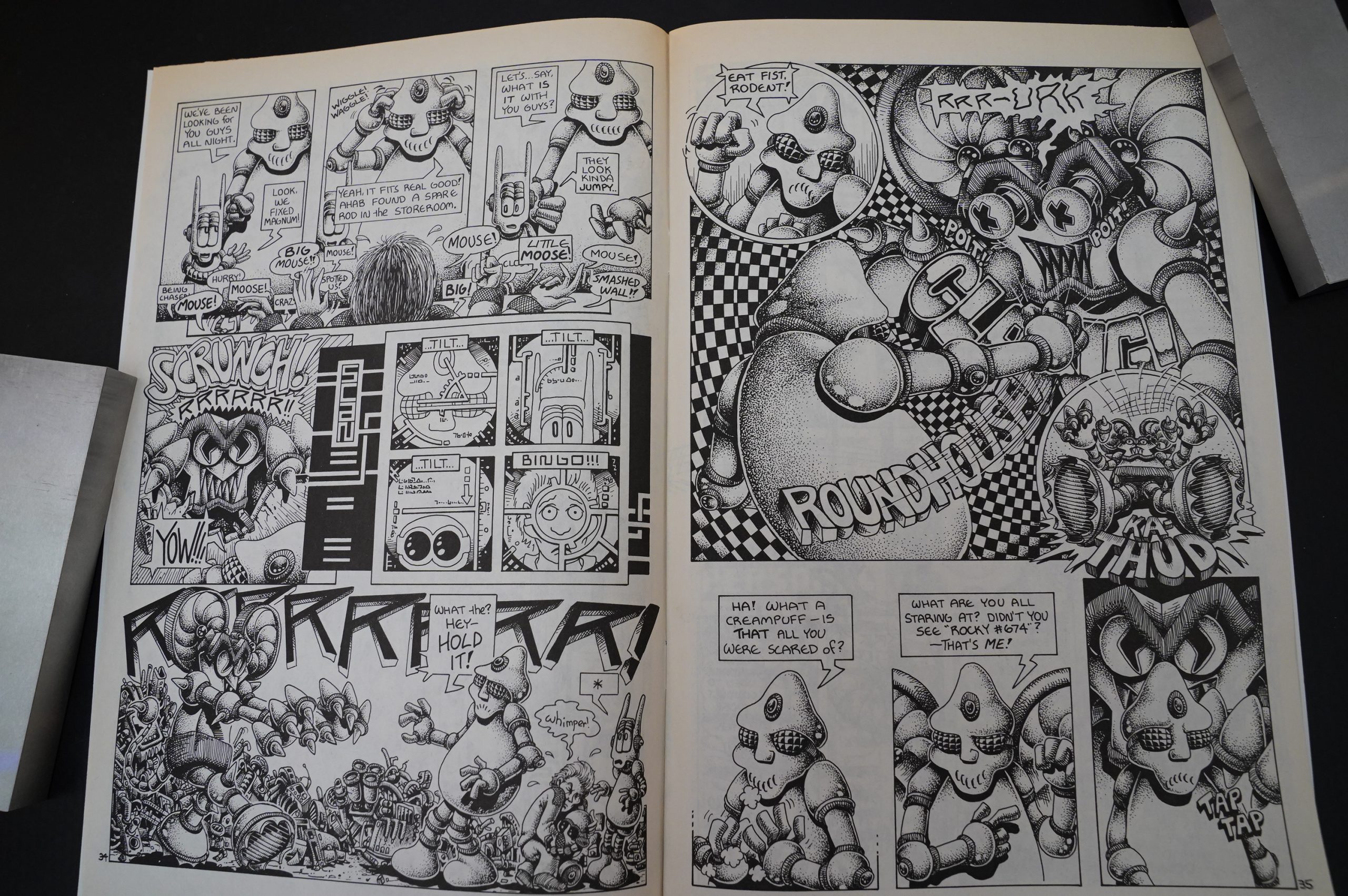 Second issue! It’s all action and fun and slapstick and bad puns! And look at that robot fight! 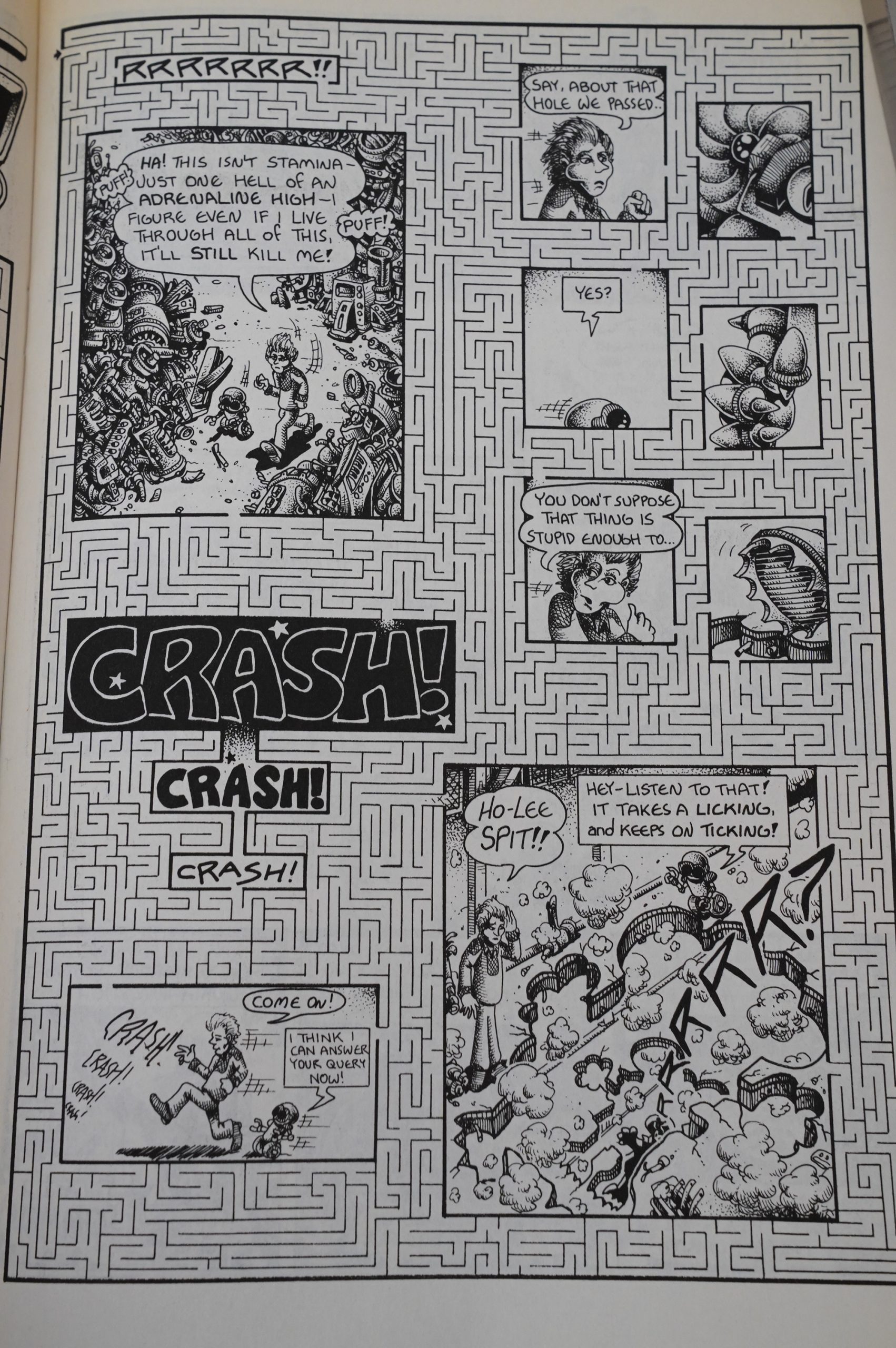 And Foster’s having a lot of fun with the storytelling here: They disappear into a maze, so he draws the panels in a maze… and the panels do connect via the maze! Hours of fun for the whole family. 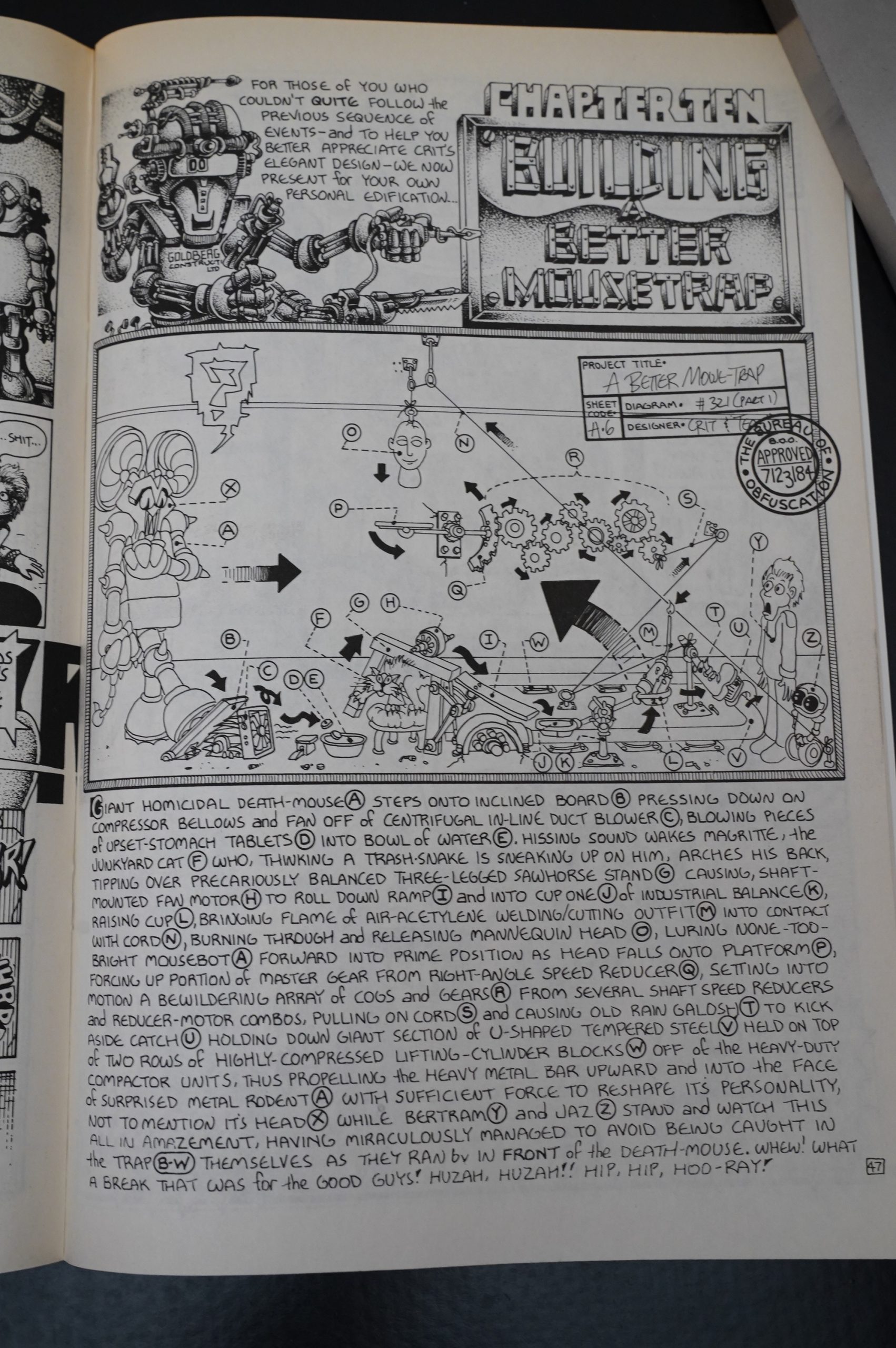 How much you get out of these shenanigans depends on how much patience you have, though. 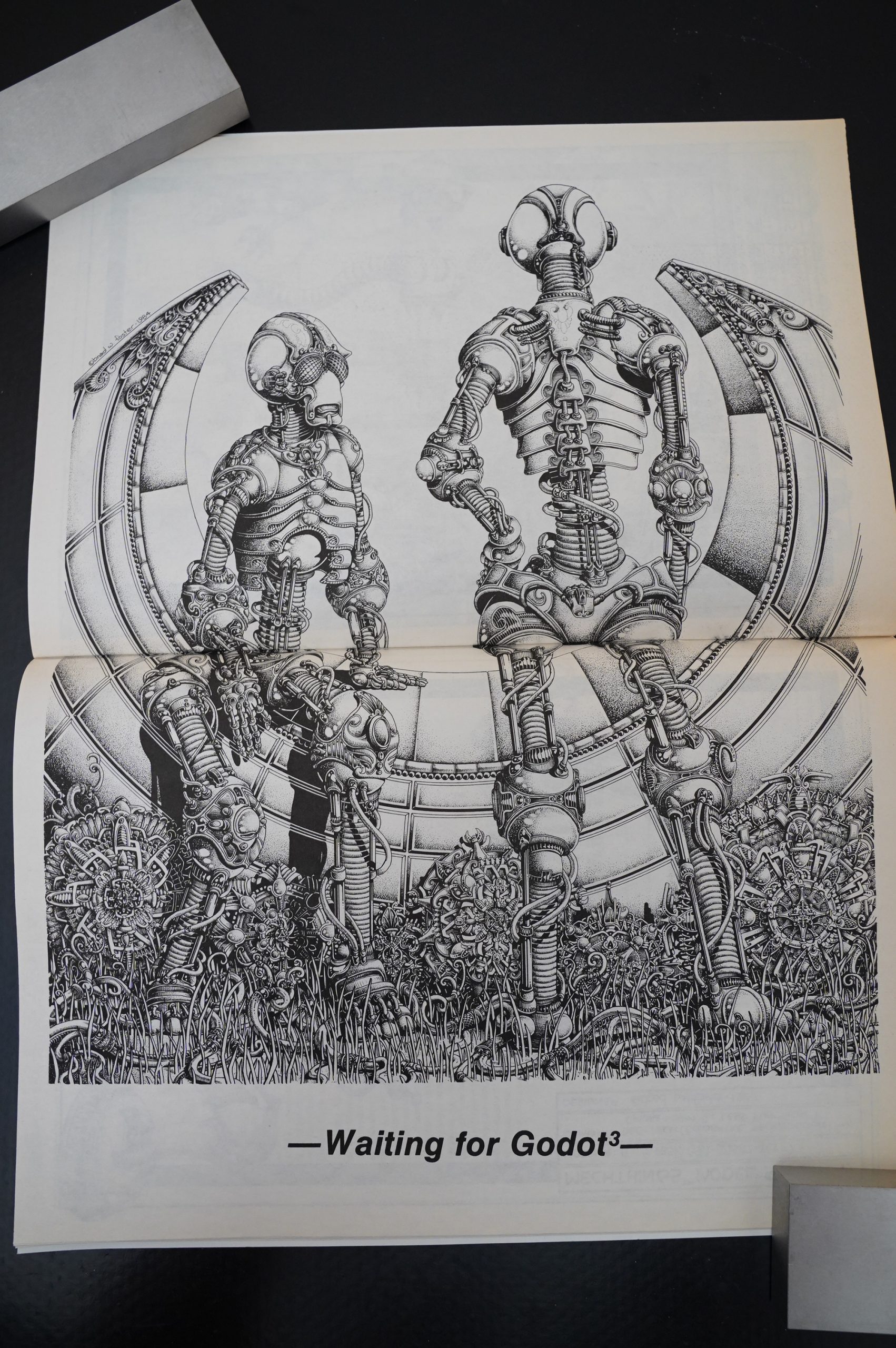 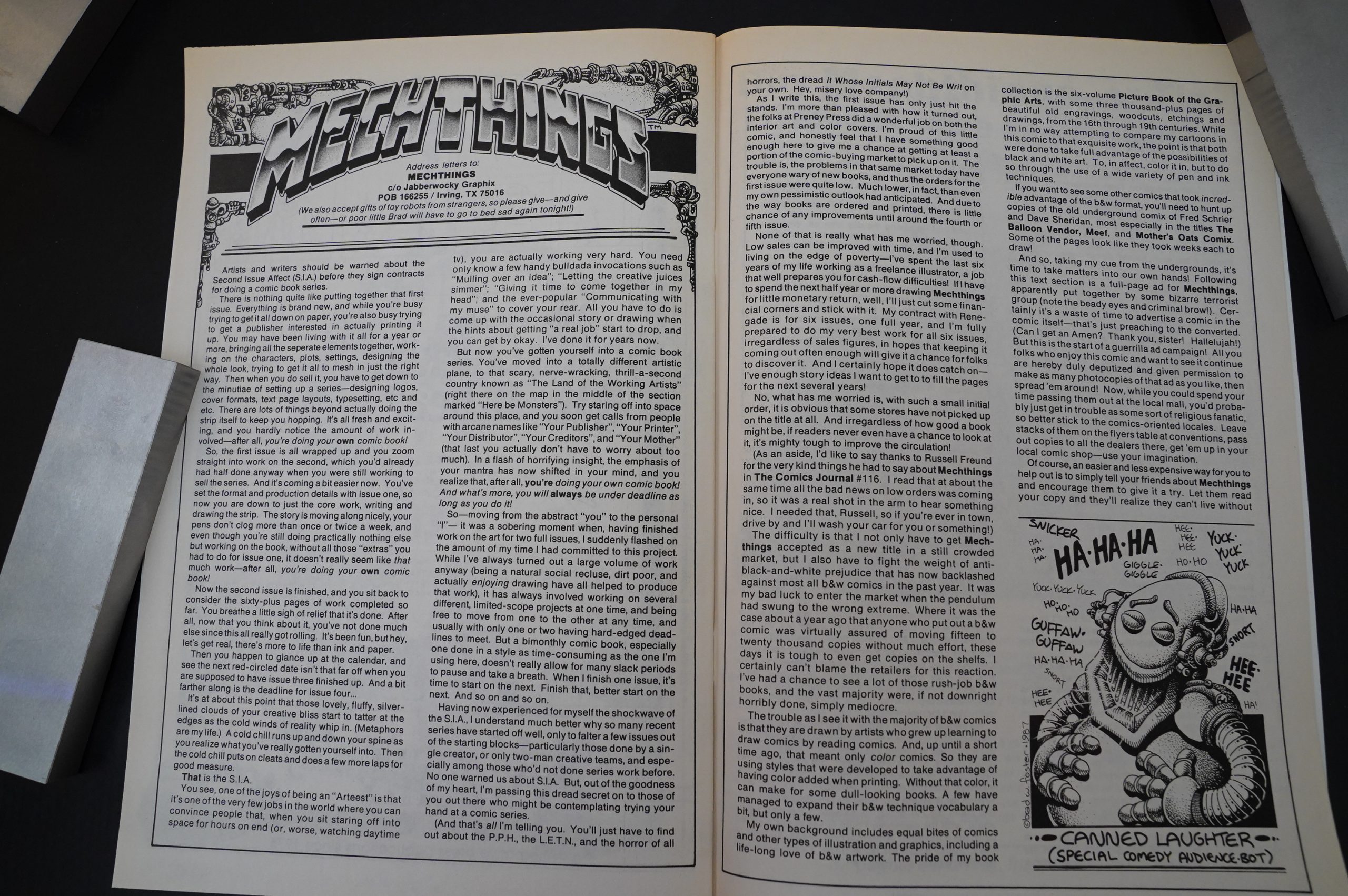 I’ve never seen anybody put it quite that way: “Second issue syndrome.” It’s after you’ve made the second issue and it dawns on you that you have to continue doing this, month in month out, and explains why so many series never have a third issue, I guess. 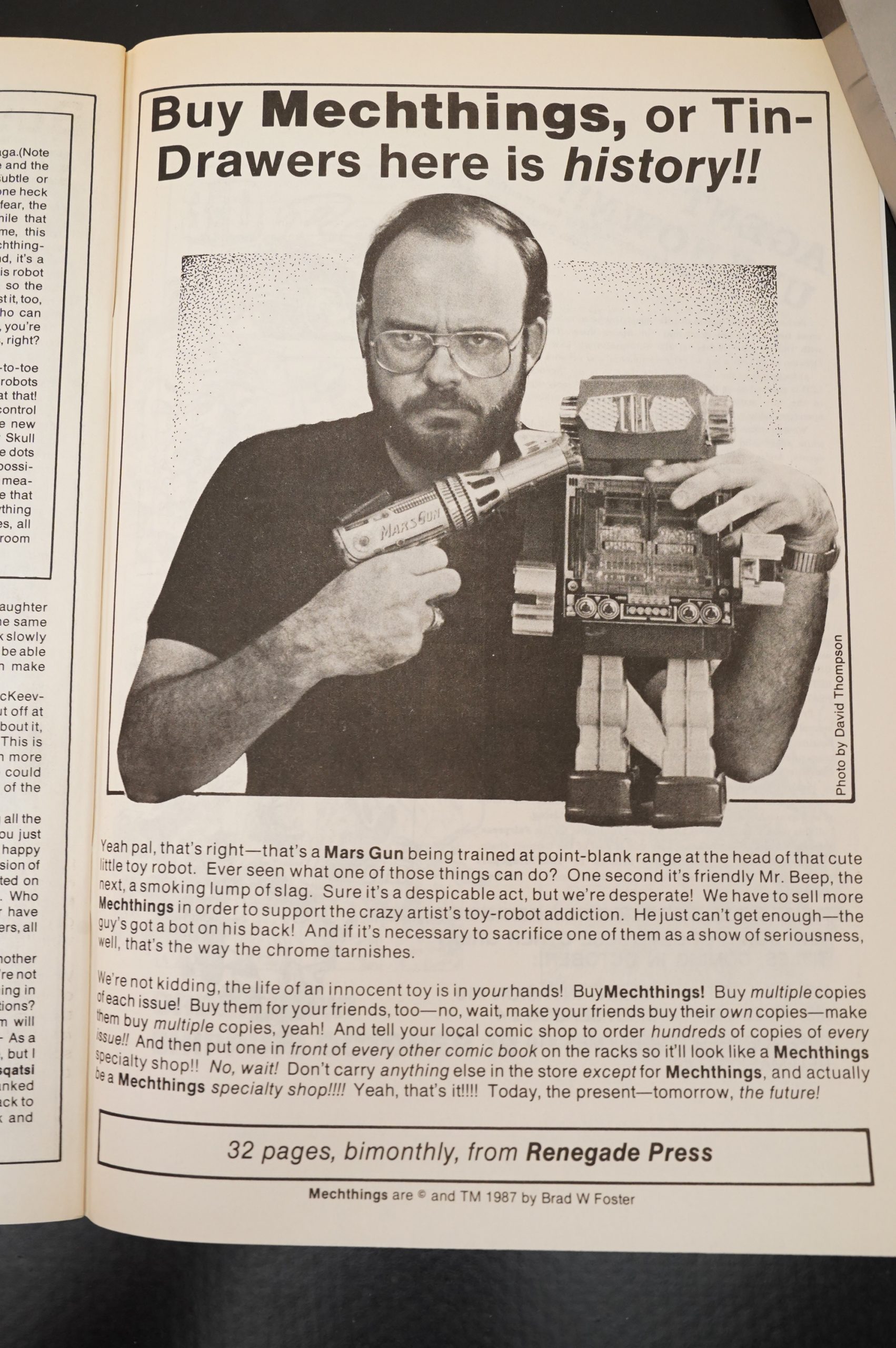 You can’t argue with that logic. 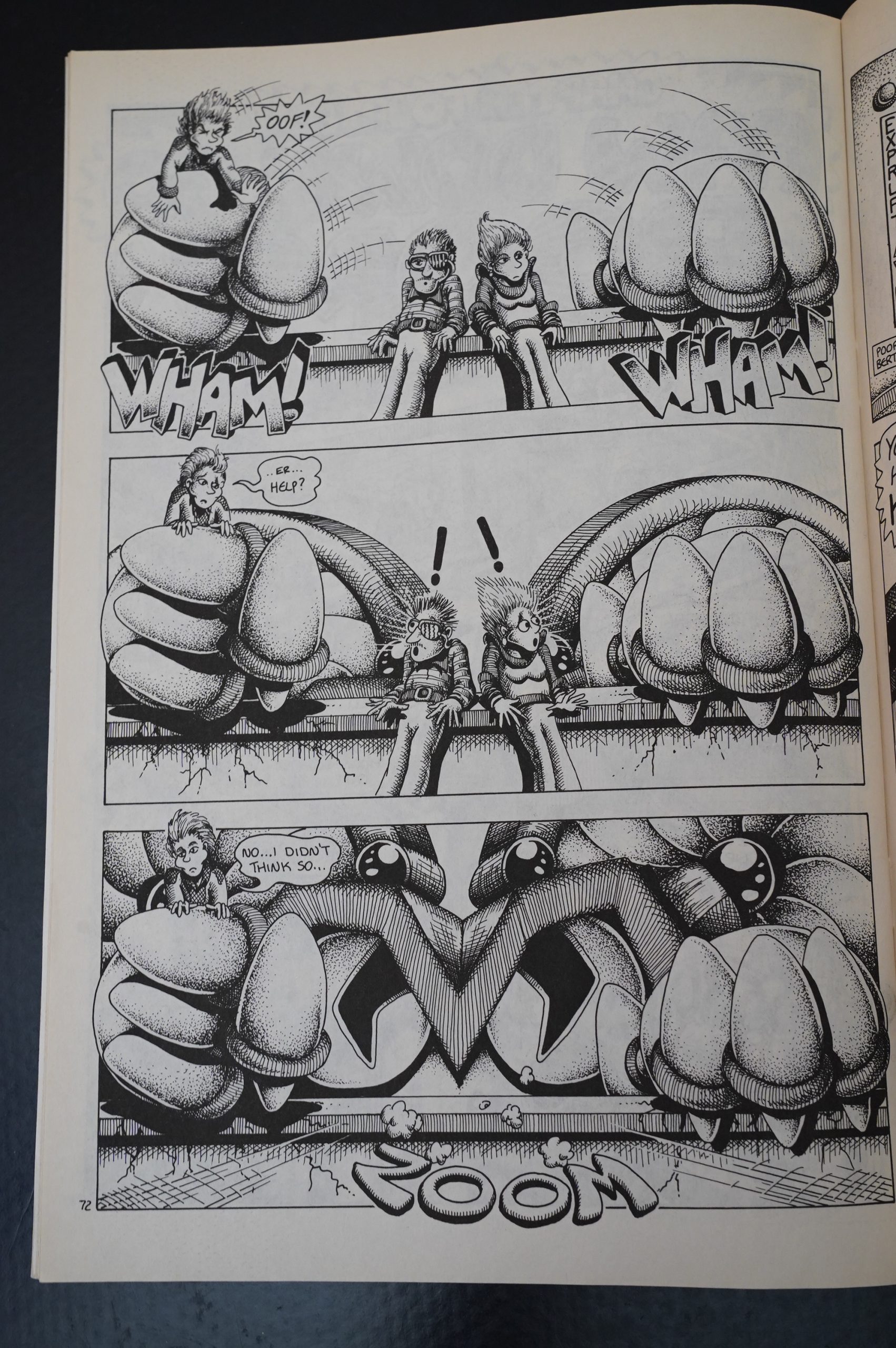 So the first issue was barely readable, and the second and third issues were a lot of fun. But the third issue was the end of the first story, so how is Foster introducing the next storyline? 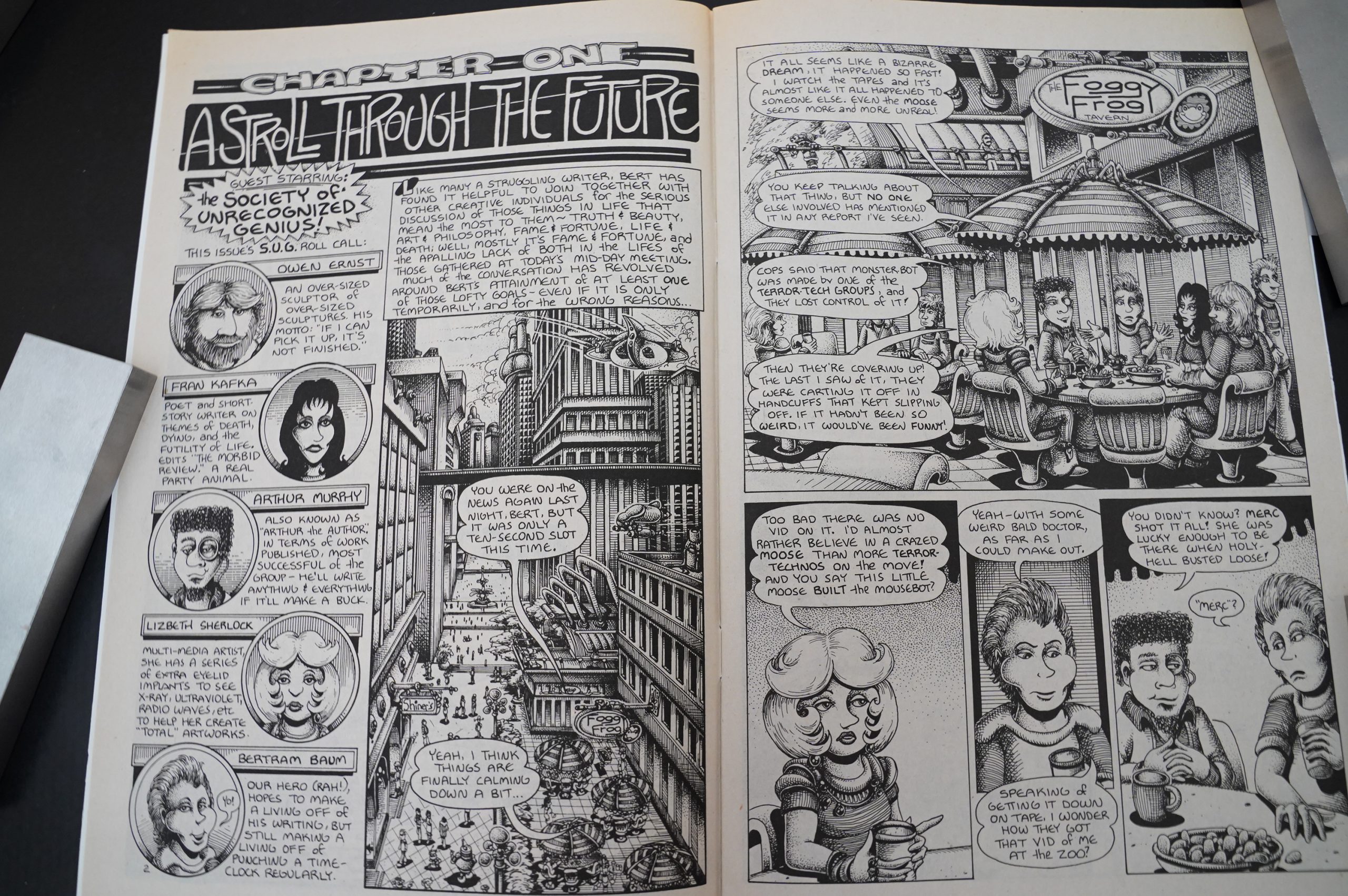 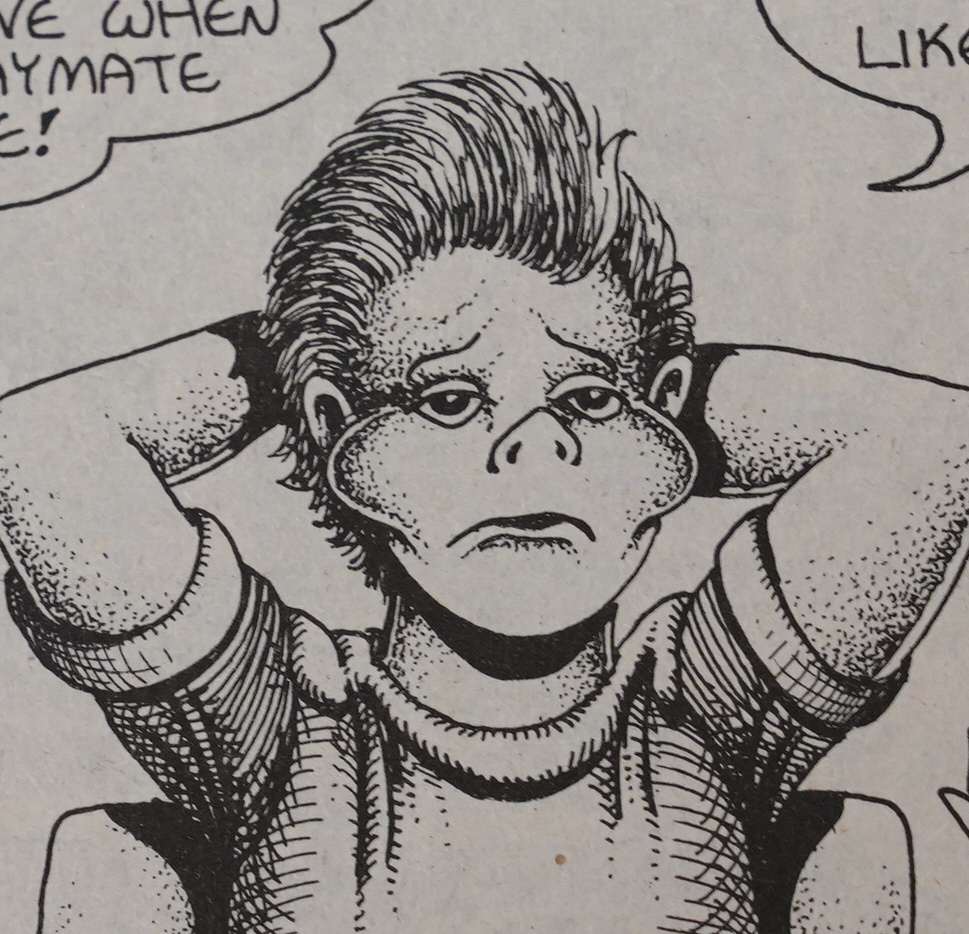 I have to mention the design of the protagonist: He’s got so huge cheekbones that they cover his years. And they’re round. He looks even weirder from other angles, but it kinda works seen from the front? 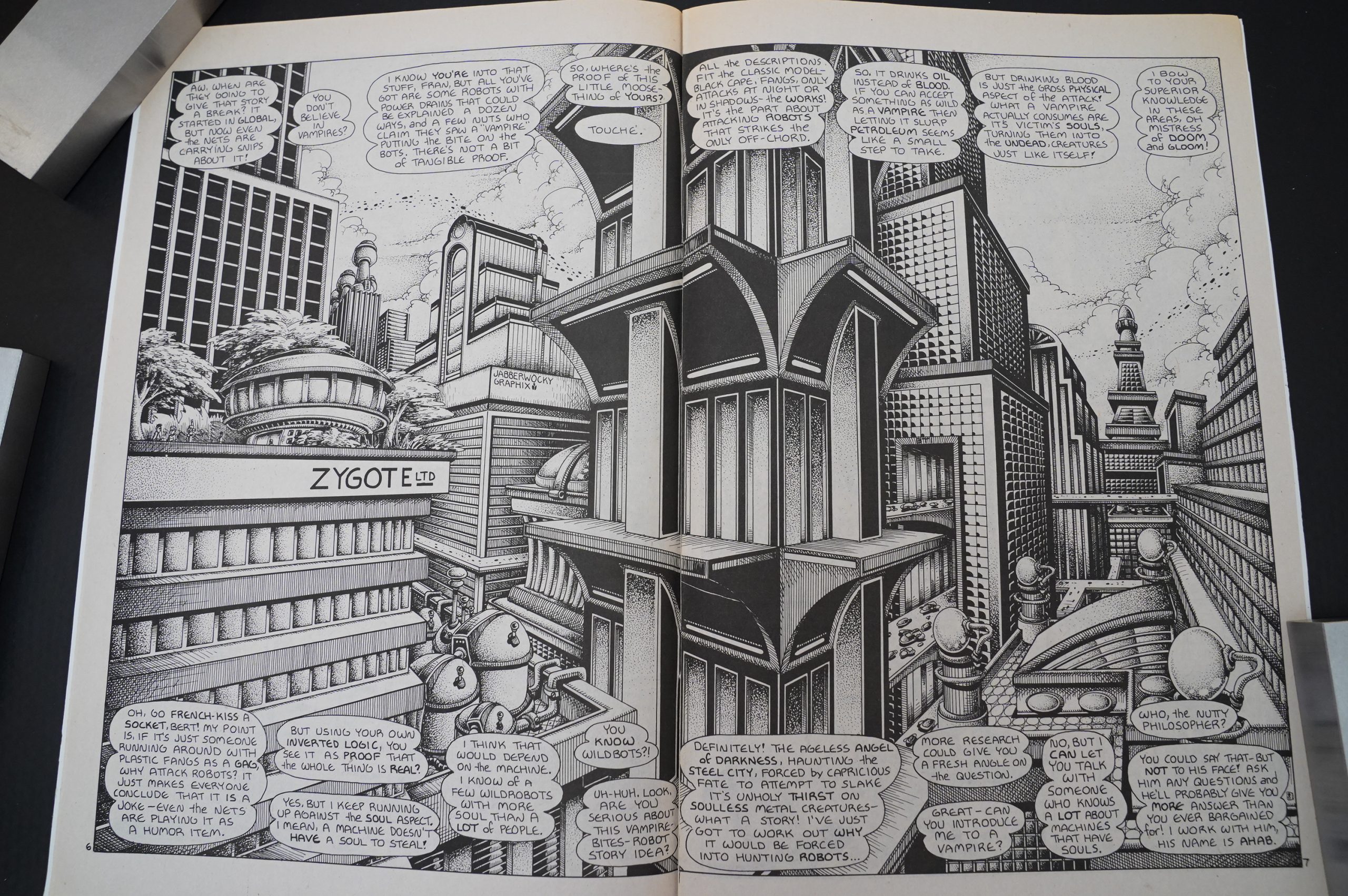 Foster feels that he has to put all this exposition in here to introduce half a dozen new characters, and explain how everything relates to everything else… but fortunately he grows tired of just drawing them talking, so instead we get a nice cityscape instead with the dialogue floating above it. 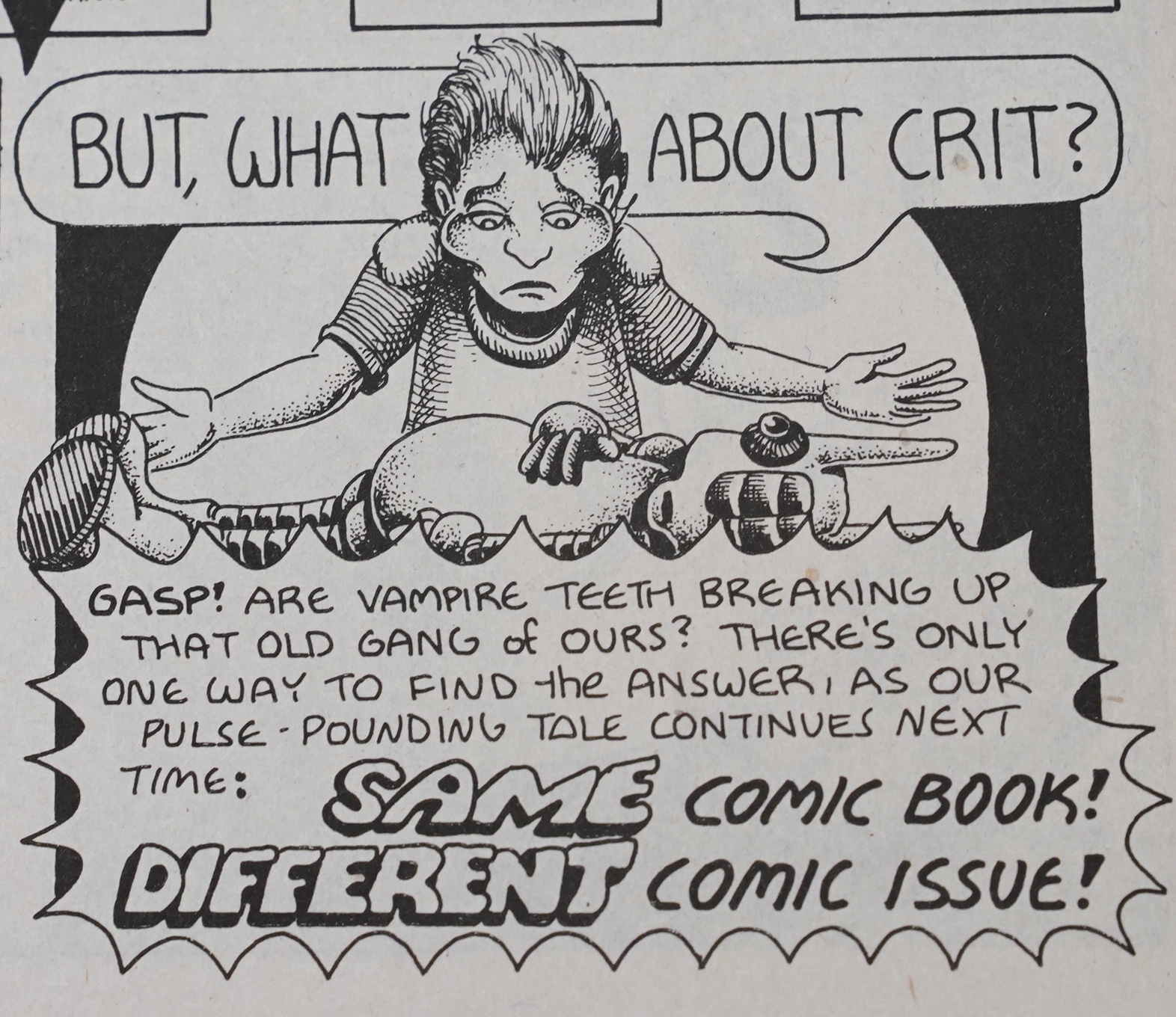 Foster said that the first issue’s orders were dismal, and then the second issue had half of those sales (which I don’t find surprising at all if they were placed after reading the first issue), so I’m guessing Renegade just had to cancel the series due to low sales.

Brad Foster is another small press
figure moving gradually into profes-
sional ventures. In the first issue of
his Mechthings (which is set in the
41st century), a young kid named
Bertram Baum showsålp for his first
day on the job as “the new human
supervisor” Of a “reclamation
center” or robot junkyard. Before he
can get his bearings, a violent police
raid ensues and malevolent, Keystone
Cop-like figures tear the place apart
in search of “wild robots’ ‘—robots
who have developed into “people who
just happen to have metal skin.” In
the aftermath, Bertam gets acquaint-
ed with some of the individualized,
quirky ‘Smechthings” that dwell in
the junkyard—they have names like
“Jaz,” “Crit,” “Bartholemu,” and
“Jaxon”—and develops an abiding
sympathy for their plight. The series
will develop from this premise.
I had a good time with Mechlhings.
The book is an entertaining concoc-
tion, a featherweight, tongue-in-cheek
version of Blade Runner told from the
robots’ point of view.

I thought Blade Runner was told from the point of view of the robots?

It’s a good
vehicle for Foster, who has always
been better at drawing things than
people, and he takes an obvious
delight in creating this futuristic land-
scape full of idiosyncratic robot/
people. The first two issues are,
I think, marred by an overabundance
of dialogue. Foster doesn’t appear to
understand that much of the verbiage
could be easily distilled or simplified,
to better effect. The word balloons
impinge on some good examples Of
Foster’s ornate draftsmanship. (A
good, Strong editor would help him
out here.) In such scenes as the
ing raid on the junkyard or the ap-
pearance of the “Death Mouse” In
the first issue, Foster gets to strut his
stuff. The visual flourishes are a lot
Of fun.
Foster has labored for years in the
relative obscurity Of small-press
publishing. (Foster would omit the
“relative” in that last sentence, but
if there is such a thing as a “small
press empire, ” Foster has built one
on his Jabberwocky Graphix.) Rene-
gade Press is publishing and distrib-
uting Mechthings, which is an attempt
at something more commercial than
Foster’s small-press work.
He’s a bright, imaginative guy, and
he’s been struggling to get a foothold
in the comics industry for a long time.
I hope RISter benefits in positive ways
from the exposure Mechthings
bring him.

Ah, Foster was the guy that ran Jabberwocky Graphix. 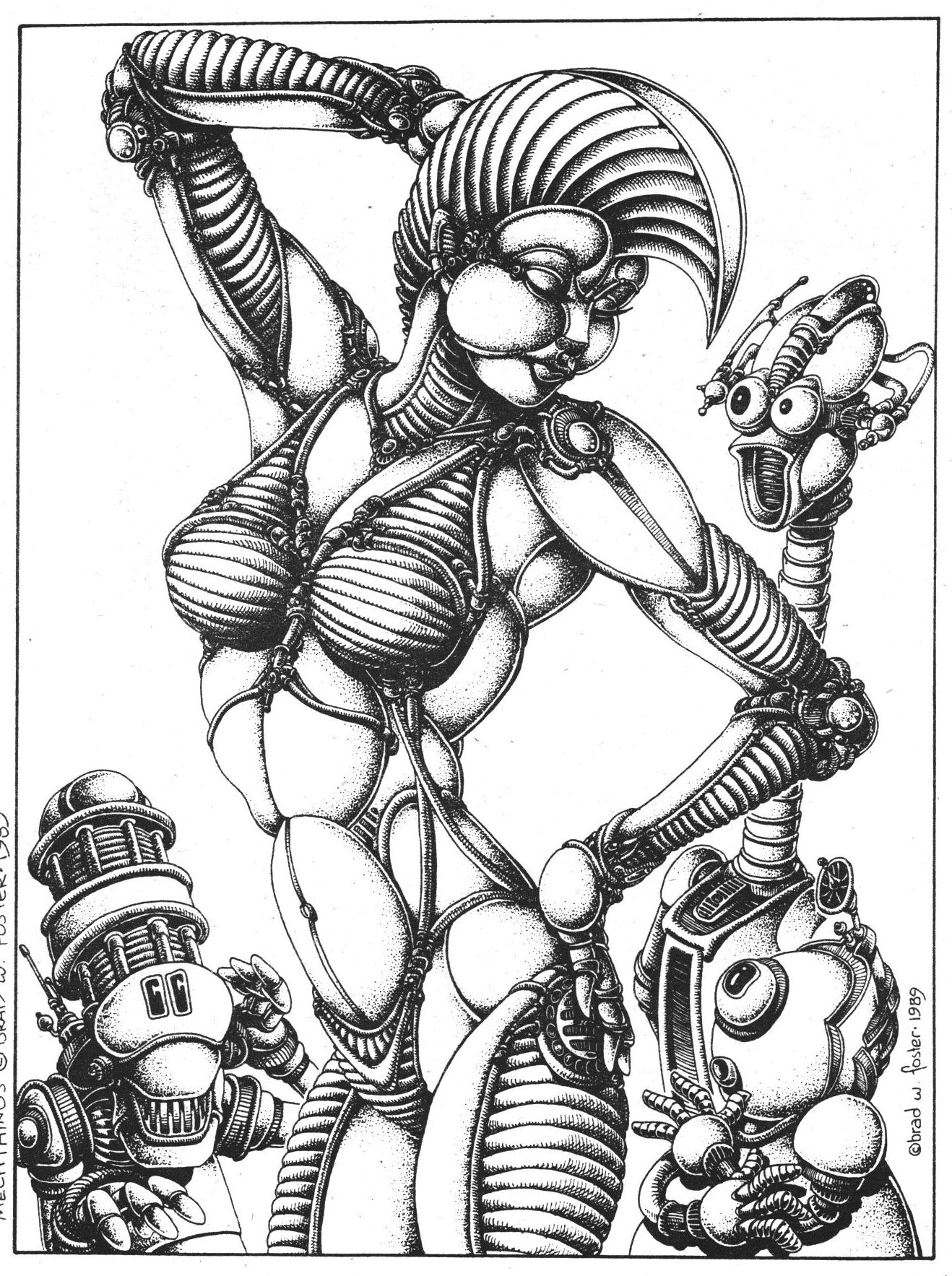 A pin-up by Foster from an Amazing Heroes Swimsuit edition.

“I finally came up with a title for Book
One,” says Foster. “It’s ‘Of Men, Mice,
Machines and Mooses.’ I’m not too sure
what Book Two is going to be titled yet.”
Issues #4-6 make up that second book,
and conveniently they will be out before
the next Preview Special.
Foster has created an elderly super-
hero for the story. Heavyduty Man is the
seventh in his line, and with the passage
of genes from generation to generation,
his powers have become diluted, “It’s
sort of like: the first guy starts out with
heat vision, and by the time you get to
him, he’s got ‘warm’ vision.” He’s getting
older without an heir, so he builds a
robot to carry on the name (“Basically
he’s shaped like a battery with a cape—
‘Heavyduty.’e get it? Real subtle”).
The villain each Heavyduty Man has
fought in his time is Vincent von Eric,
a nearly immortal vampire. “It suddenly
dawned on me that a vampire isn’t
immortal, it does have a limited lifespan.
The flesh does finally deteriorate beyond
rejuvenation at some point. He’s really
old just like the Heavyduty guy is real
old. *This whole story came about
because I had this image of a full page
at the end of the story of the two robots
blazing away at each other on top of a
building in good Marvel style, while
down at the bottom of the building
there’re these two old guys in wheel-
chairs whacking each other with canes.”

“Basically what
I’m trying to do is talk about prejudice
and racial bigotry and all that shit
without having to put it in there
[blatantly] and knock them over the head
with it.”
Depending on sales (doesn’t every-
thing?), Mechthings may be renewed
beyond the sixth issue. If so, keep an eye
out for the dynamic debut of Hitler’s
head, the return of Max the Maximum
Moose, this time with an army of flame-
throwing dolls, and giant cardboard
robots—maybe not all in the same issue.
Foster promises to continue putting in
more dots and lines per inch than
humanly possible. And of course he still
wants you to send him toy robots (but not
those stupid transforming ones). The guy
has a ‘bot on his back. Mechthings also plays a familiar
genre for laughs. In this case, it’s
the story of the robots on the run
from human who fear their mecha-
nistic intelligence and individuality.
It’s Blade Runner with a smile
from the robot’s point Of view.
Brad Foster gives it a most beguil-
ing look. He has a gift for creating
walking junkpiles with real char-
acter, and his pointillistic shading
technique lends his work a seduc-
tive touch of depth and drama.
And I did mention it’s funny?
Well, it is. Renegade is becoming
a very funny place.

These issues have never been reprinted, and the Mechthings storyline doesn’t seem to have been continued.

You can buy the series from Foster here.