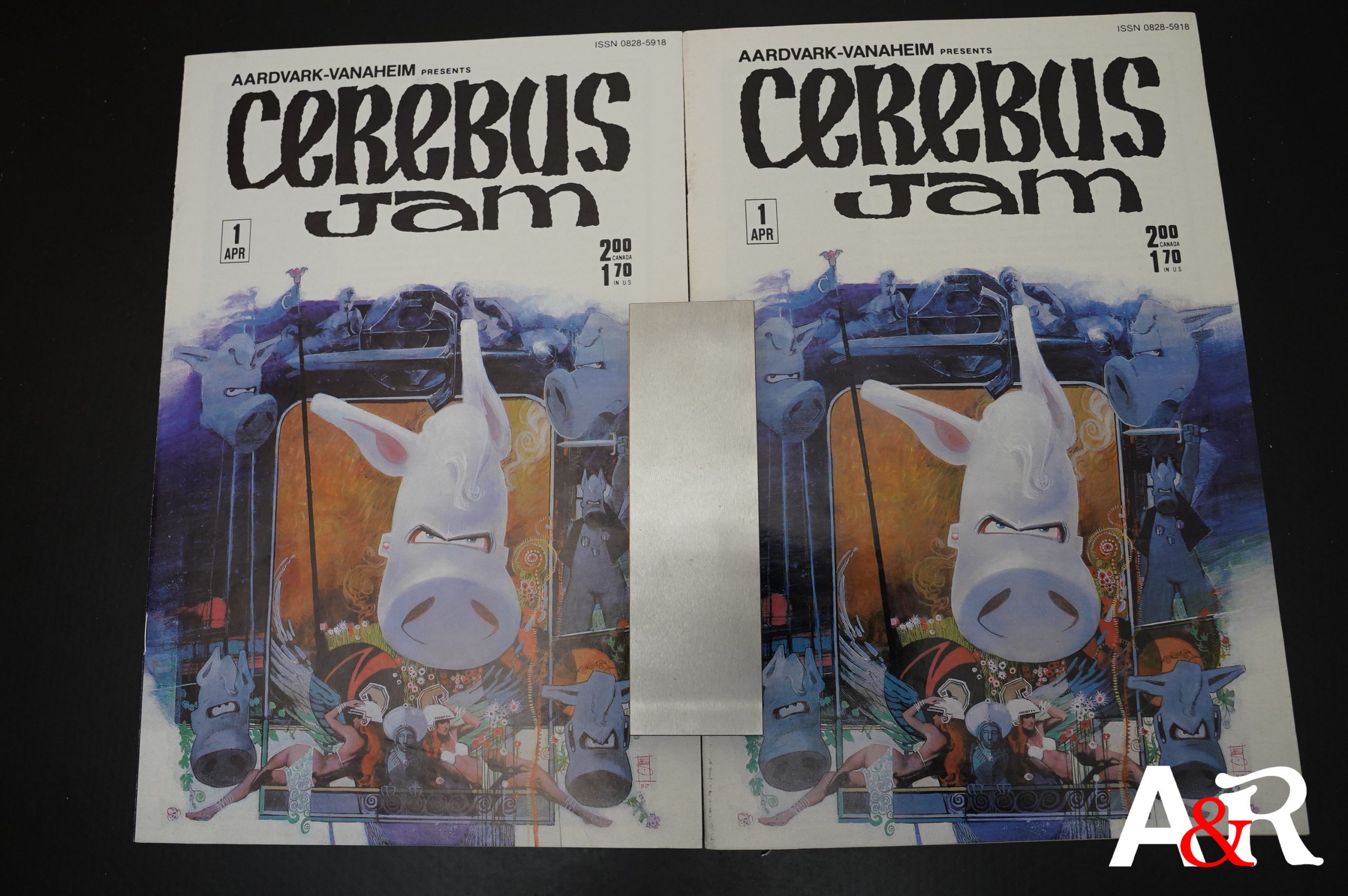 Huh. How did I end up with two copies of this? 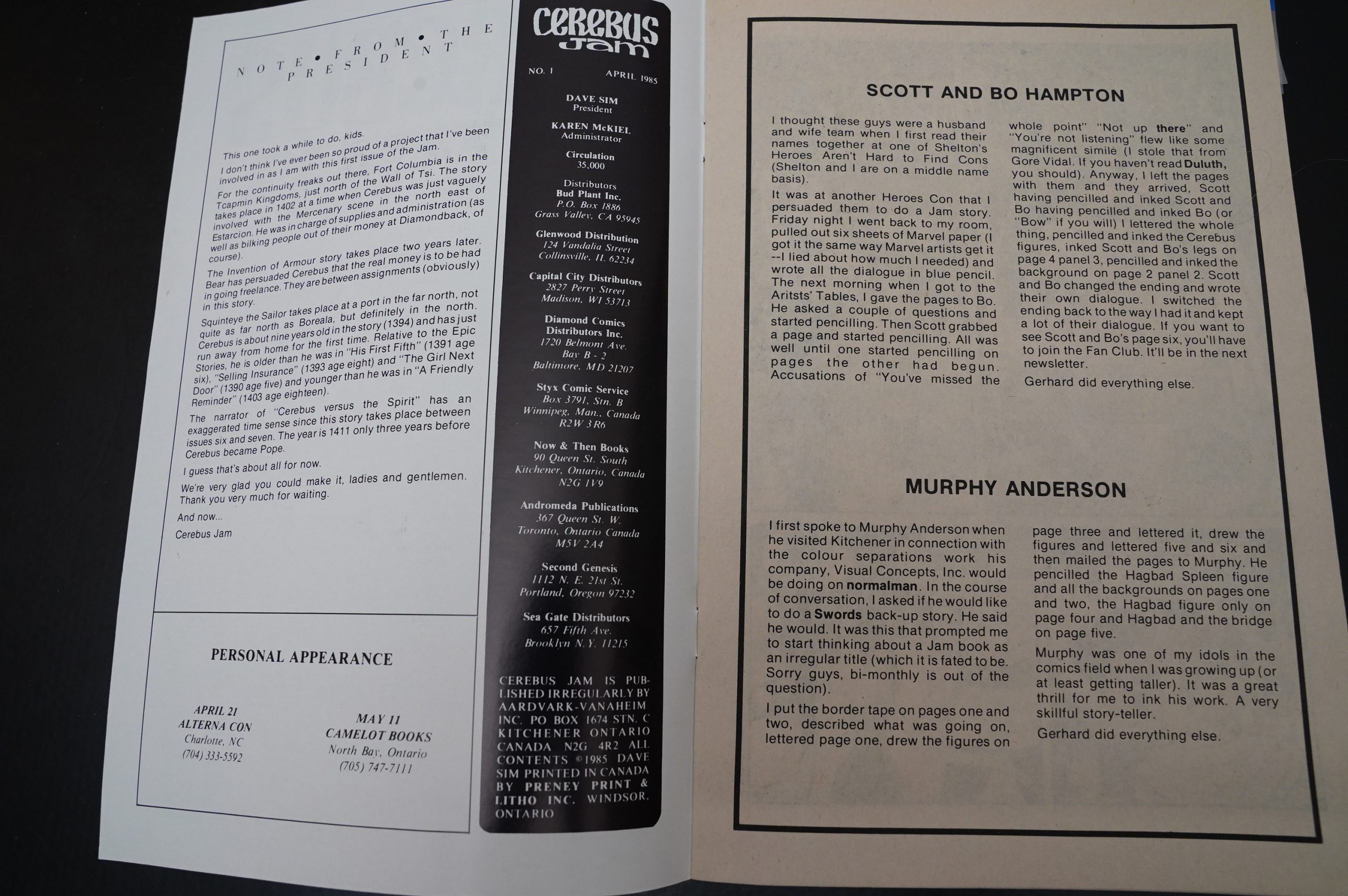 Anyway, this is the first “new series” published after Deni Loubert left Aardvark-Vanaheim, so Dave Sim does the introduction. Cerebus Jam had previously (much previously) been announced as a bi-monthly title, but I guess wrangling people into actually completing their pages turned out to be too much of a hassle, so only one issue was published. “Sorry guys, bi-monthly is out of the question” Sim writes, as if that had been a popular demand, and not something that they’d announced themselves… 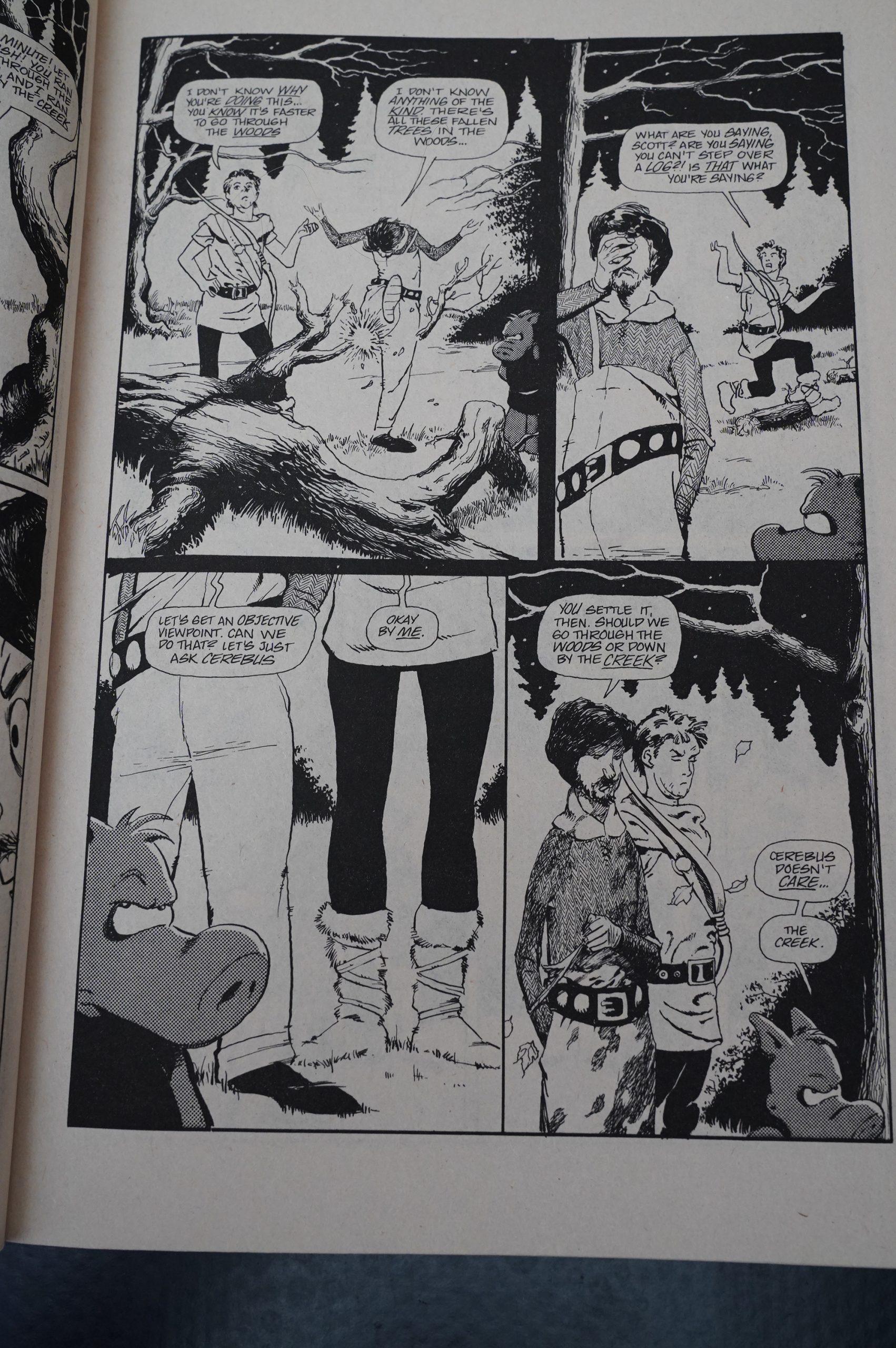 So this thing is a bunch of vignettes where Sim draws Cerebus, somebody else draws other characters, and Gerhard does the backgrounds.

If there’s one thing Sim can, it’s setting up and executing a funny little skit. So here we have Bo and Scott Hampton bickering as siblings do. 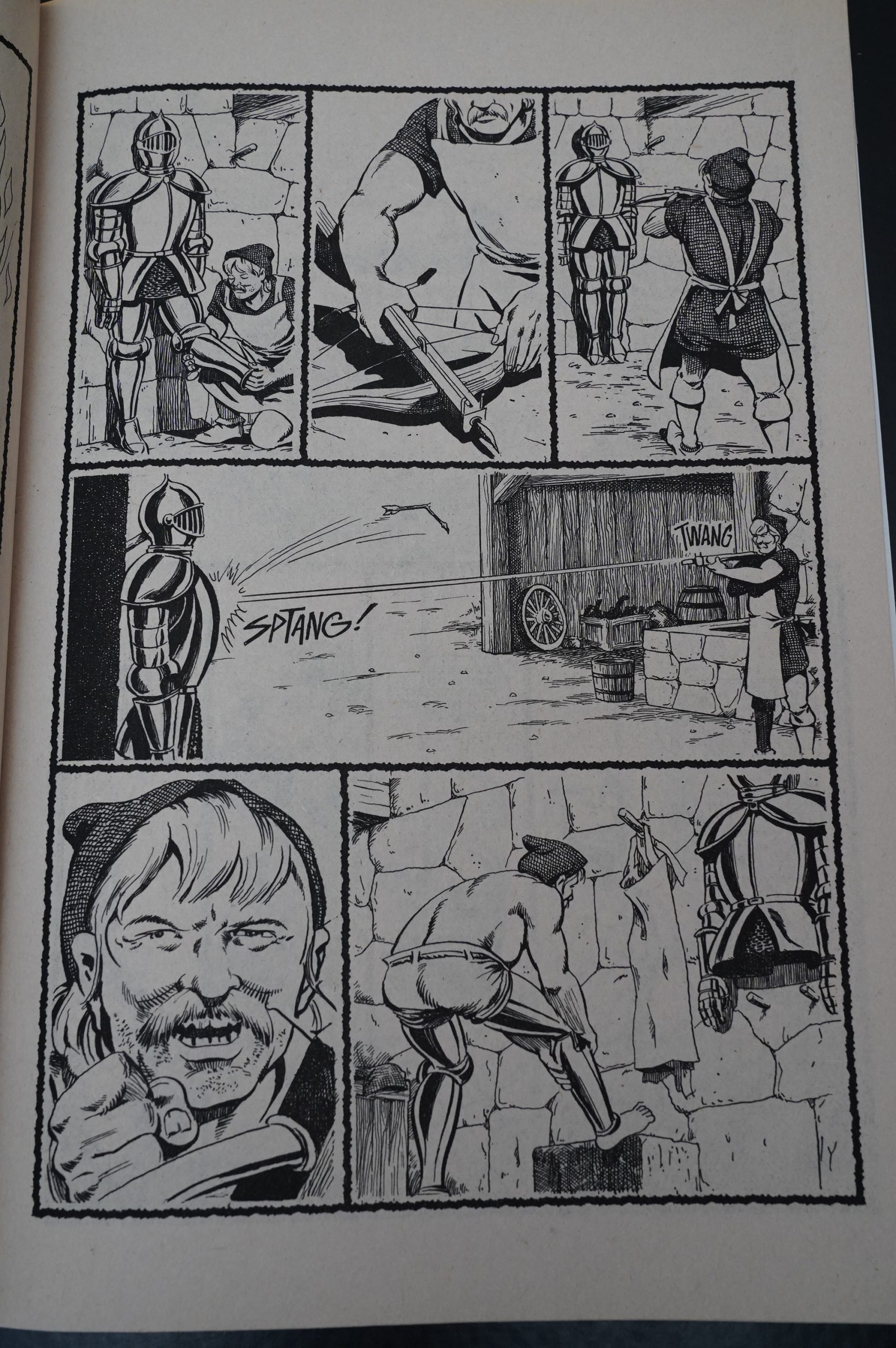 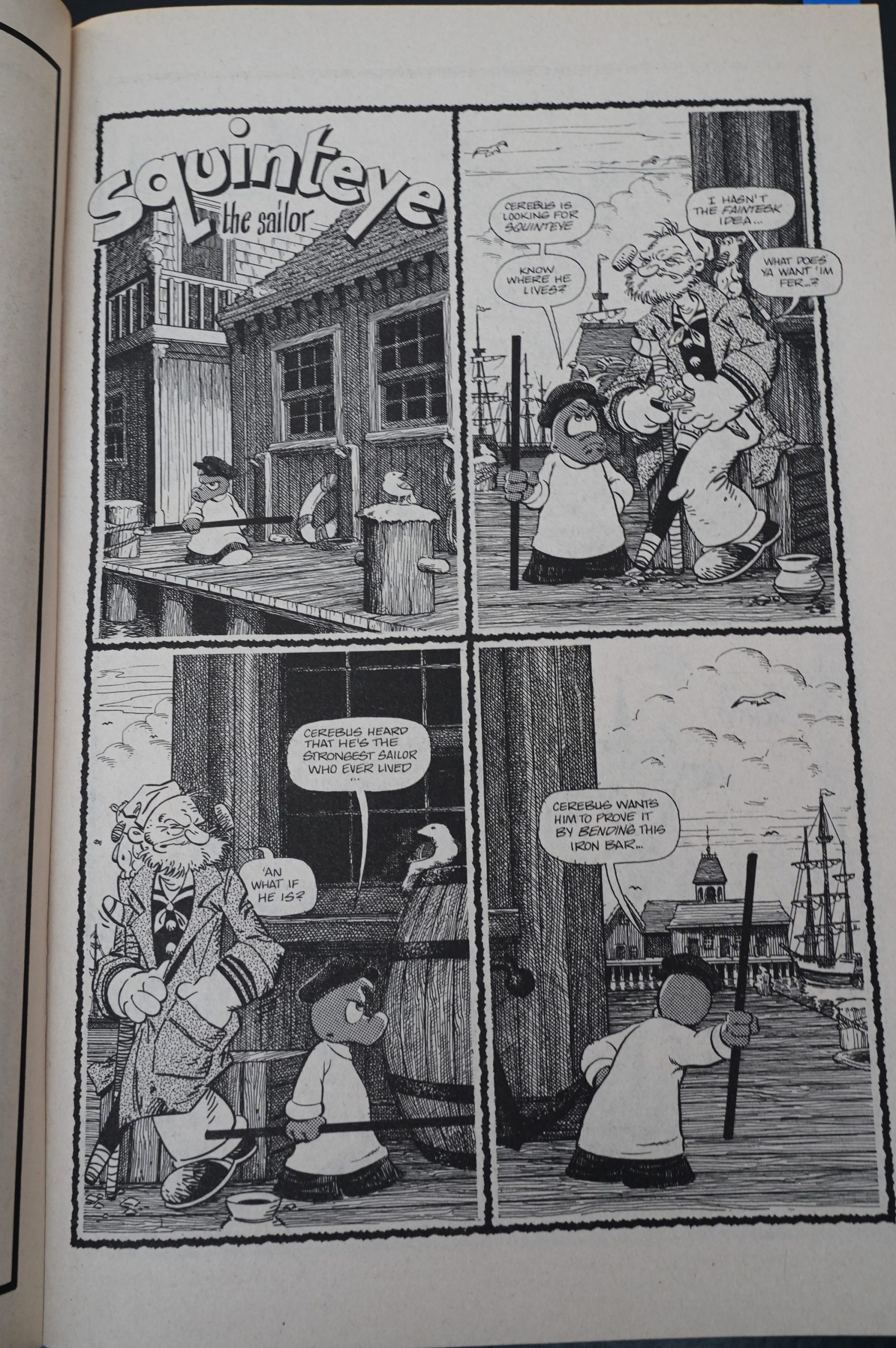 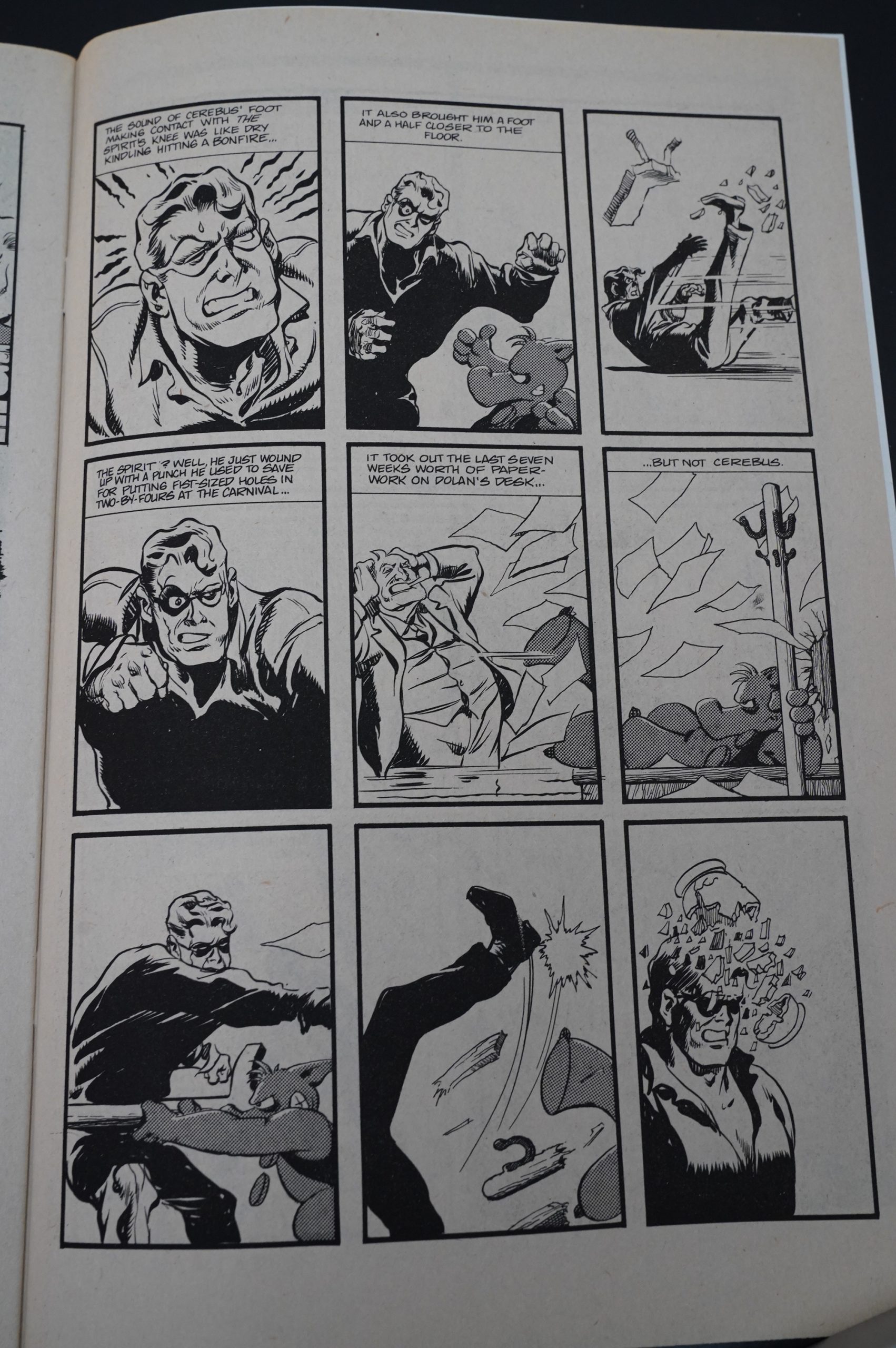 … and Will Eisner does The Spirit.

It’s a good little book. Many comics people used to working in longer formats strike out when doing short stories, but every one of these stories work well, and are fun to look at besides.

Back in the commercial comic book world. Dave Sim
and Will Eisner had their hands in some jams. Aardvard-
Vanaheim published Cerebus Jam #1 in April 1985; the
indicia stated that it was published irregularly and they
weren’t kidding — a second issue has yet to appear. One
ofthe rare comic books devoted tojamming, Cerebus Jam
features Dave Sim jamming with Scott and Bo Hampton,
Murphy Anderson, Terry Austin, and Will Eisner. All of
the stories were written by Sim, and most were also laid out
by him before being passed on to his collaborators. The
end result lacks the spontaneity of the underground and
small press comix jams, but the finished stories are more
polished than most jam comics — plus it all fits into the
Cerebus continuity, which probably pleased the hardcore
fans.

No, Cerebus Jam is not an annual.
Aardvark-Vanaheim President (as he
likes to be known) Dave Sim has given
heed to R.A. Jones’s suggestions that
he let other writers actually write their
own Cerebus stories for Jam. explain-
ing. “l like anything that encourages me
to do less work.” Candidates will have
to pass through a highly selective
screening process, however, and bet in
Sim’s words, “the right people. People
whose judgment i trust as to the kinds
of stories that would be appropriate to
the Cerebus storyline. but people also
able to just have a little bit of fun with
it. Very much like Barry Windsor-Smith’s
story in Swords of Cerebus. I have no
qualms whatsoever about allowing
Barry complete autonomy: t
So, continuing in this tradition, there
wilt be a story• in Jam by the team of
Alan Moore, Steve Bissette, and John
Totleben. Although it’s only speculative
at this point, Sim reveals that the story
could be caned ” After Issue 300,’ when
Cerebus comes back from the grave. I
dunno. You know how Alan is, he’s apt
to do it. But have every confidence that
he’ll do it well.”
Also upcoming is a story written and
drawn by Bill Sienkiewicz, featuring
Moon Roach. “It’s definitely going to be
farewell to Neal Adams. He’s going
to Neal it up something fierce.” Sienkie-
wicz may do other projects for AV, as
well.
Sim is contemplating giving a new
meaning to the Jam concept as plans
are underway to bring artists to the AV
studio as actual guests. “(We could) set
up another drawing board, and have
sort of special guest artists from time to
time. people we like to draw with,
people we like to carouse with

She then writes in Amazing Heroes Preview Special #3, page 22:

On second thought, maybe Cerebus
Jam is an annual. The contents of the
long-awaited second issue have been
firmed up as follows: The first story is
“The Applicant,” by Dave Sim and
Colleen Doran, covering “sexual
harrassmentt dedicated in particular to
a number of people in positionS of
authority in various comic book
companies,” according to Sim. “Cam-
paign Stop,” by Sim and Dick Giordano,
is an untold story of Cerebus from “High
Society,” as well as a tongue-in-cheeck
look at DC comics.
“After that we’ve got ‘The Farmer”‘
says Sim, “containing no fewer than a
dozen deaths by broadsword in five
pages. Sure to be a fan favorite. That’s
with Mike Grell. And Ahead of his Time’
with Barry Windsor-Smith, where Cere-
bus meets the Anarcho-Romantic
equivalent of Leonardo da Vinci.”
There’s a pretty good chance that this
issue will be out sometime before the
end of the year, though Sim wishes to
avoid such terms as “firm release date.”
“Firm release dates are sort of a
concession to the marketplace I don’t
like to make except for Cerebus,
because that’s something I do for
myselfe I just don’t want to do it to other
people. They’ll only get to do one
Cerebus Jam story, so they might as
well have a little fun.”
As for that fabled beast, Cerebus
Jam #3, perhaps we shouldn’t look too
far ahead, but when it appears it will
probably be something radically differ.
ent (for example, a 20-page Flaming
Carrot crossover) as Sim harbors some
grave doubts about the feasibitity of the
present Jam format. As he puts it in a
rather amused tone, “This is not
working out so good.”

Did any of these stories actually happen? Hm… perhaps some were printed in Cerebus proper? I guess I’ll find out when I read the next batch of Cerebus in a couple of weeks.

Somebody writes in Amazing Heroes #77, page 59:

Ifthe proceeds from this book went
to famine relief, would it have been
titled Aardvarks for Africa?
I suppose in the case of a charac-
ter like Cerebus, who is so strongly
associated with a single creative
talent, there is always the curiosity
as to how that character woul(i be
handled by someone else. iVel!.
after reading this book you still
won’t really know. There are
several other artists who contri-
buted, but by and large the script-
ing and the renditions of Cerebus
wjere done by Ddve Sime I’ll take a
look at each tdle presented in this
anthology.
The first story entitled “The
Defense of Fort Colombia,”
with
artistic contributions from brothers
Bo and Scott Both of
them are fi ne dratnatic artists, and
hero they show themselves equally
adept at applying a comedic touch
to their work. It is the story of two
brothers ) who can’t
agree on anything, and demon-
strates the tragically funny results
oi their dawdlimg.

Much the humor
other fans praise seems to escape
me, with my most enjoyable
scenes often being the dramatic
ones. Though fear I will never
become a Cerebus convert, I do
greatly adrvire the work of Dave
Sitn, and consider höm to be one oi
the finest artists in the business.
iVith that as my background, I
fully expected to react with com-
plete indifference to Cerebus Jam.
Such was not the caw, for t found it
to be quite entertaining. I think the
reas,on for that is very simple.
lhese are vignettes; comedic
scenes that can be quickly
established and just as quickly
deliver their punchline. They are
complete in and of themselves,
rather than merely being chapters
in an ever-expanding saga with
which you may not be totally
familiar. There are not dozens of
sub-plots and supporting charac-
ters you have to keep straight. A
person who has never read Cere-
bus could still •pick this book up
and find at least a measure of satis-
fation.