After some help from Eli, I now have a proof of concept of rendering HTML with proportional fonts in Emacs.  The main difficulty is, of course, doing line folding on a pixel basis instead of a word basis, and lining stuff up in tables.

Here’s how my test page looked before these changes: 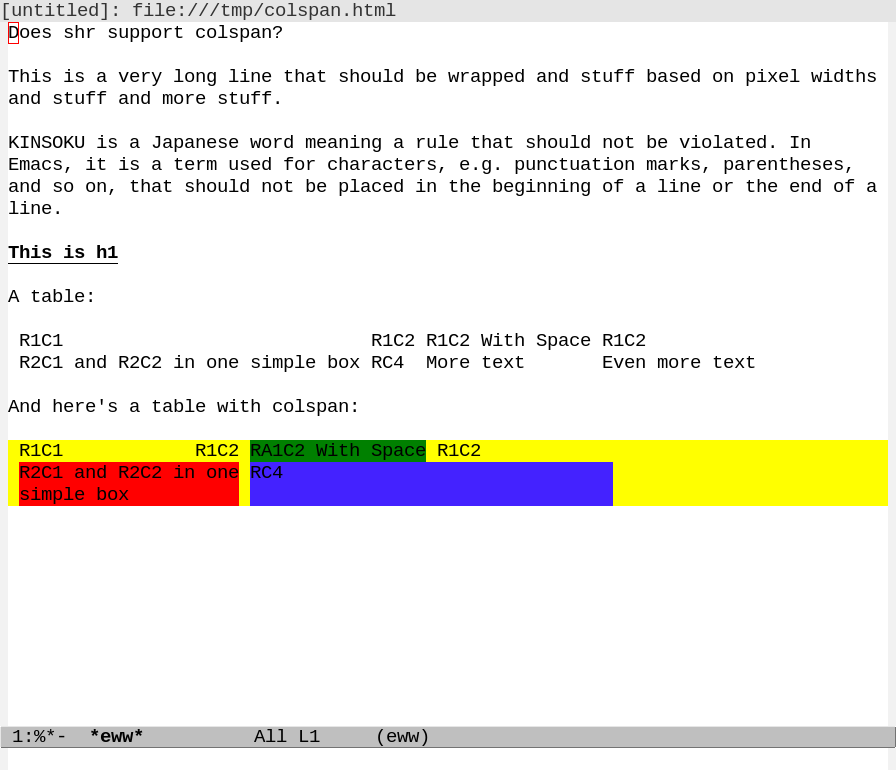 And now with a variable-width font: 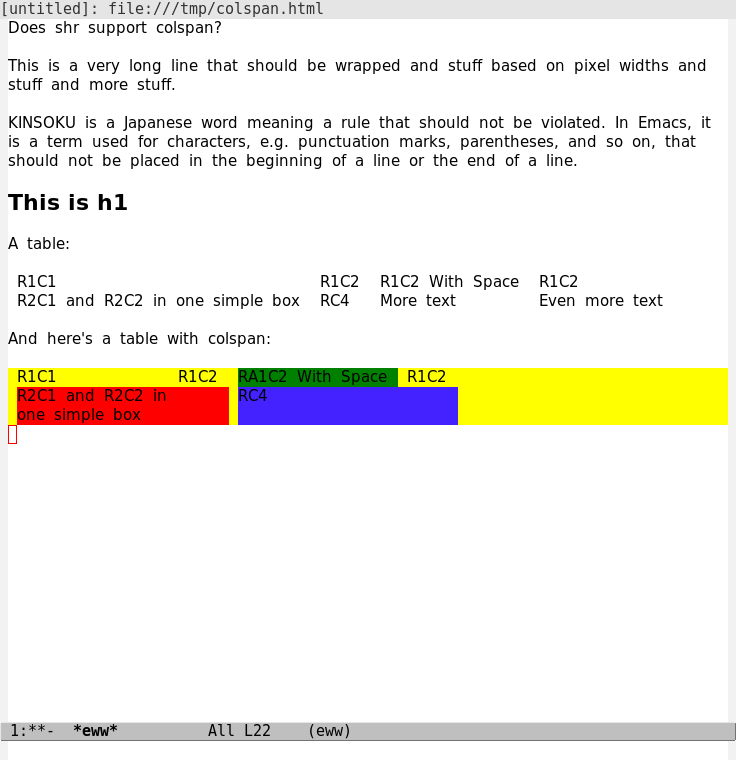 Let’s have a look at a couple of real-life pages.  Duck Duck Go: 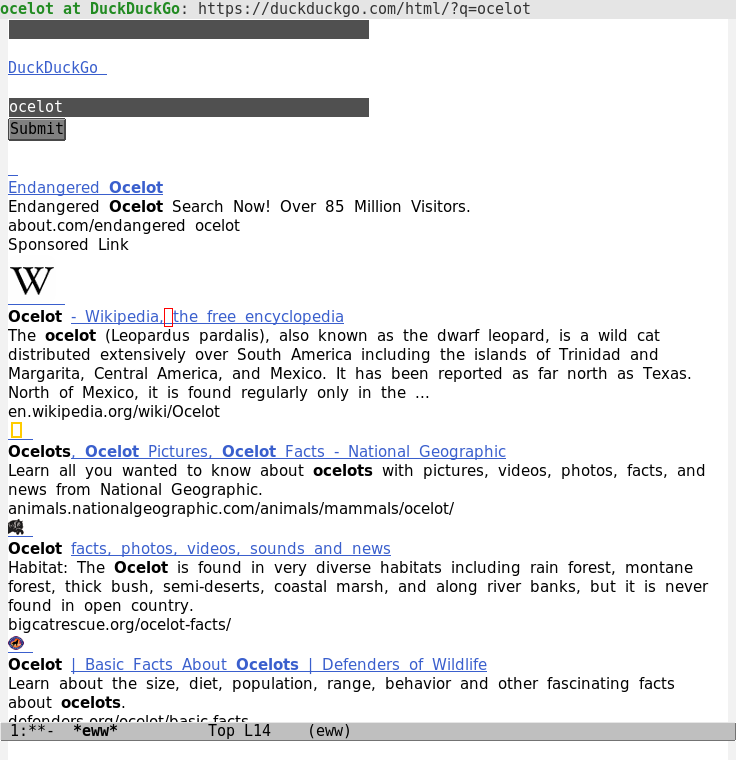 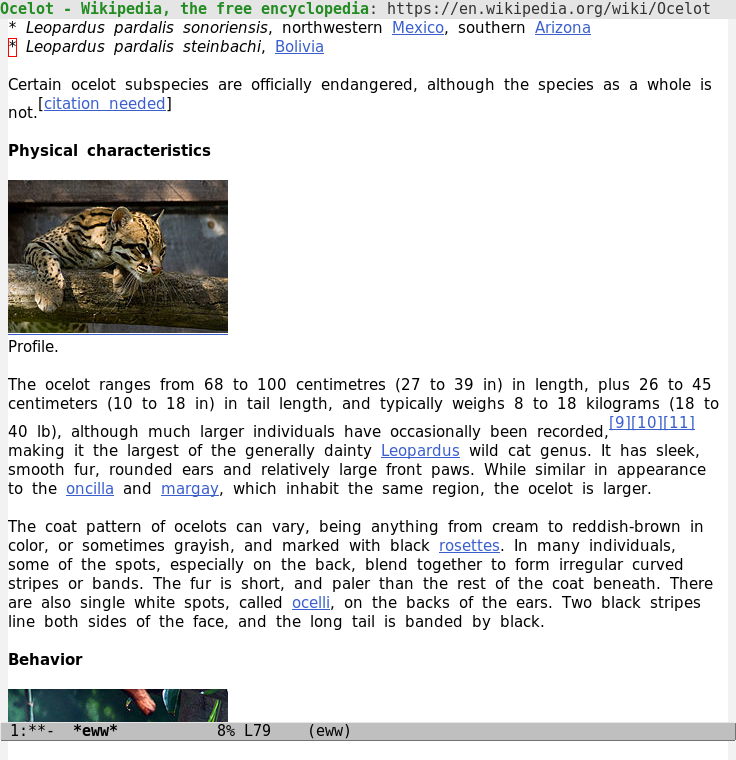 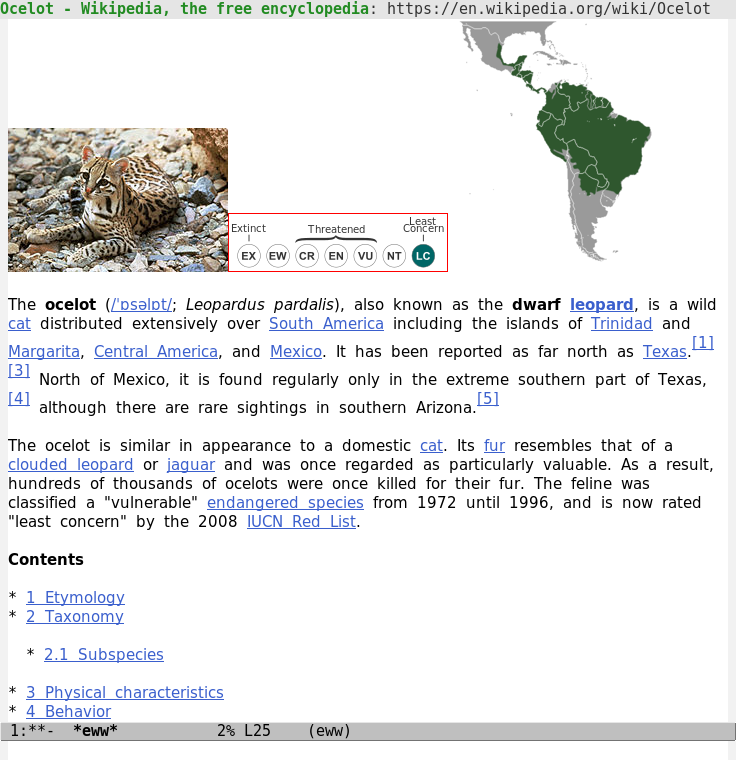 It’s kinda starting to resemble a real browser, if you squint at it.  After more than a couple of beers.

It’s just a proof of concept, so far.  There is, of course, lots of twiddling to be done with <pre>, font style sheets and stuff, but the main issue that has to be addressed is speed.  At the moment, it’s quite slow.  I suspect we’ll have to add a C-level function that can say “what pixel column am I at now”, because the Emacs Lisp version I’ve cobbled together isn’t effective enough.

Emacs gets a lot of very nice, but quite simple patches that take quite a lot of keystrokes to process.  It’s hard on the fingers, and you always forget various bits.

So I wondered how simple it could be, and hacked up this workflow tonight.

You start in the debbugs-gnu buffer, as always, narrowed down to the patches with `C-u / patch’ and perhaps an `x’. 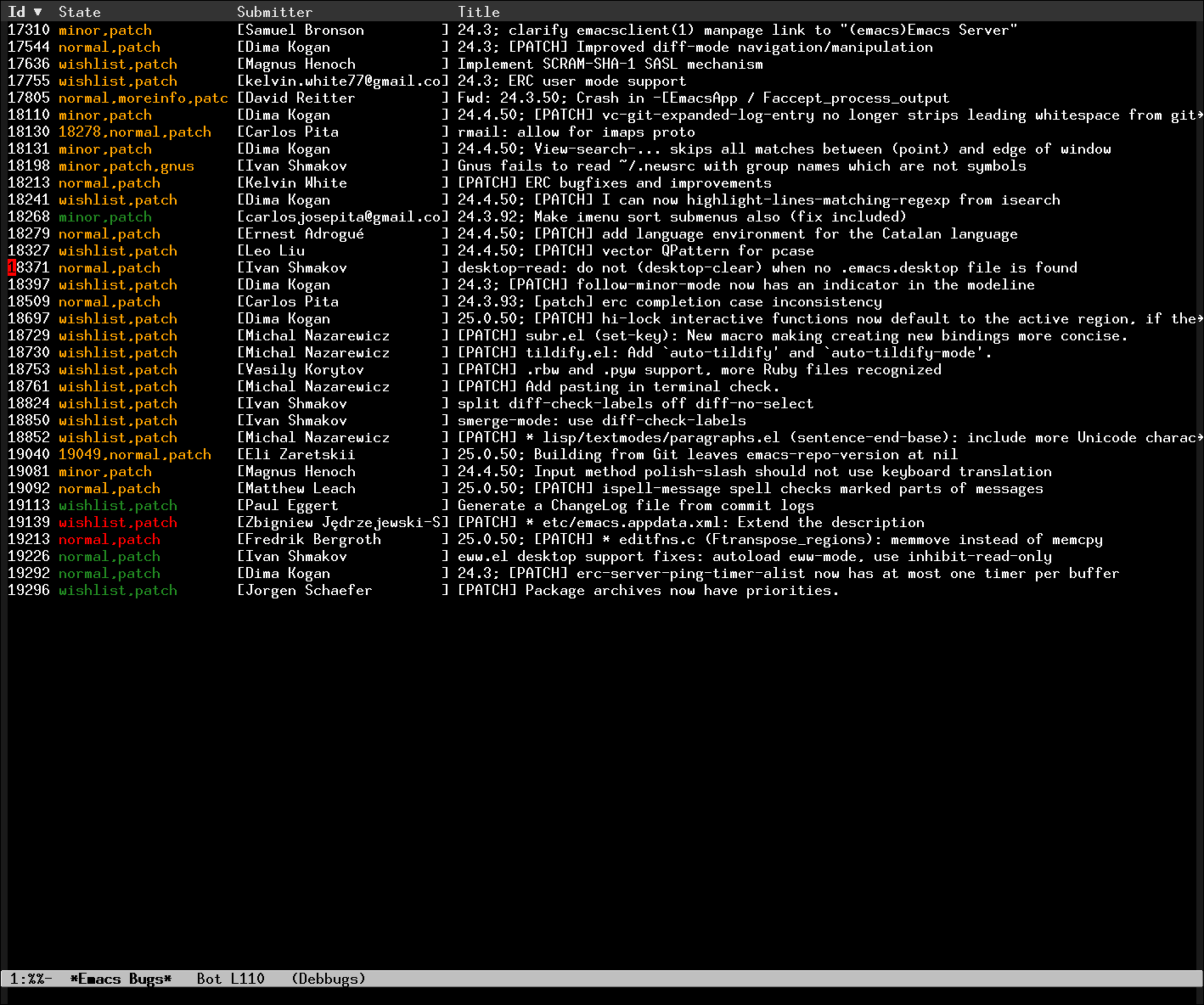 Select a likely message with `RET’. 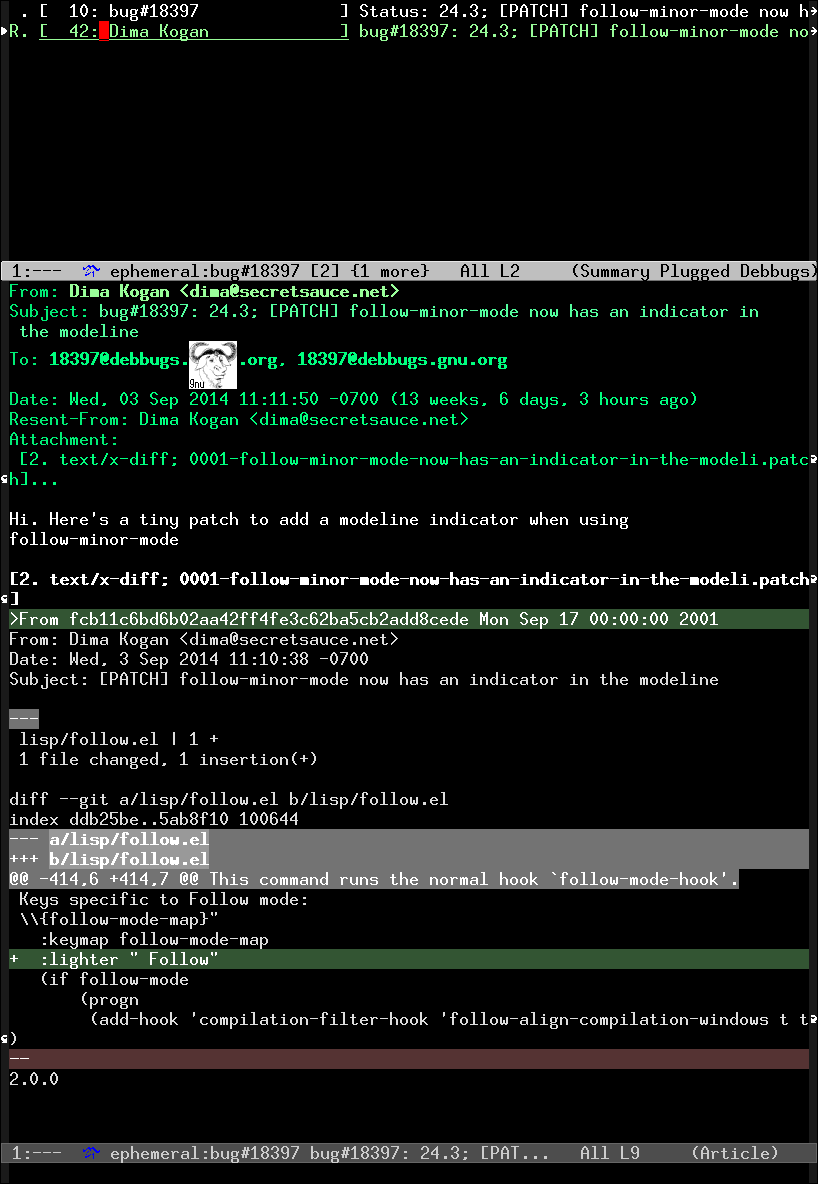 Then the fun begins with the new `M-m’ command.  It determines whether the patch is in the MIME attachments or just included in the message, applies it, and displays the diffs and possibly any rejected hunks.  It also does a `compile’ in the lisp directory so that we see that things are OK. 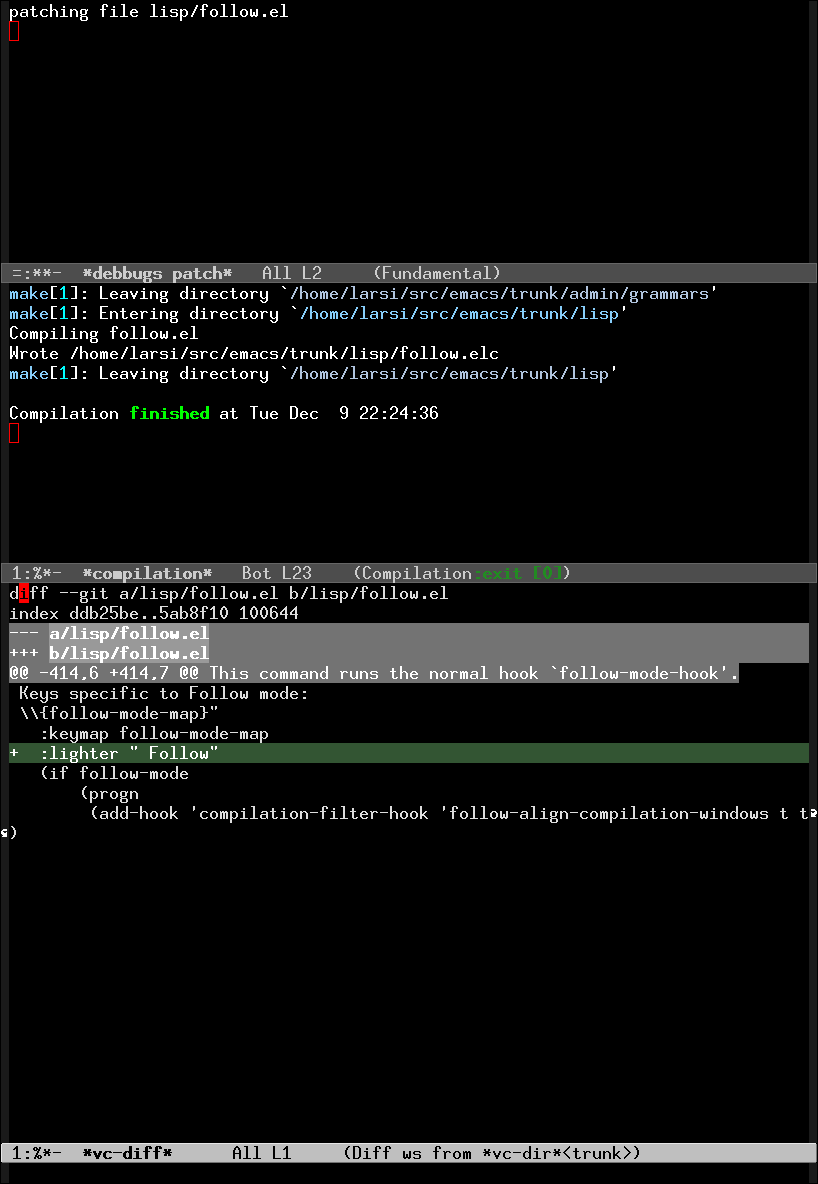 Everthing is hunky dory, so we just hit `M-m’ again to go to the changed file. 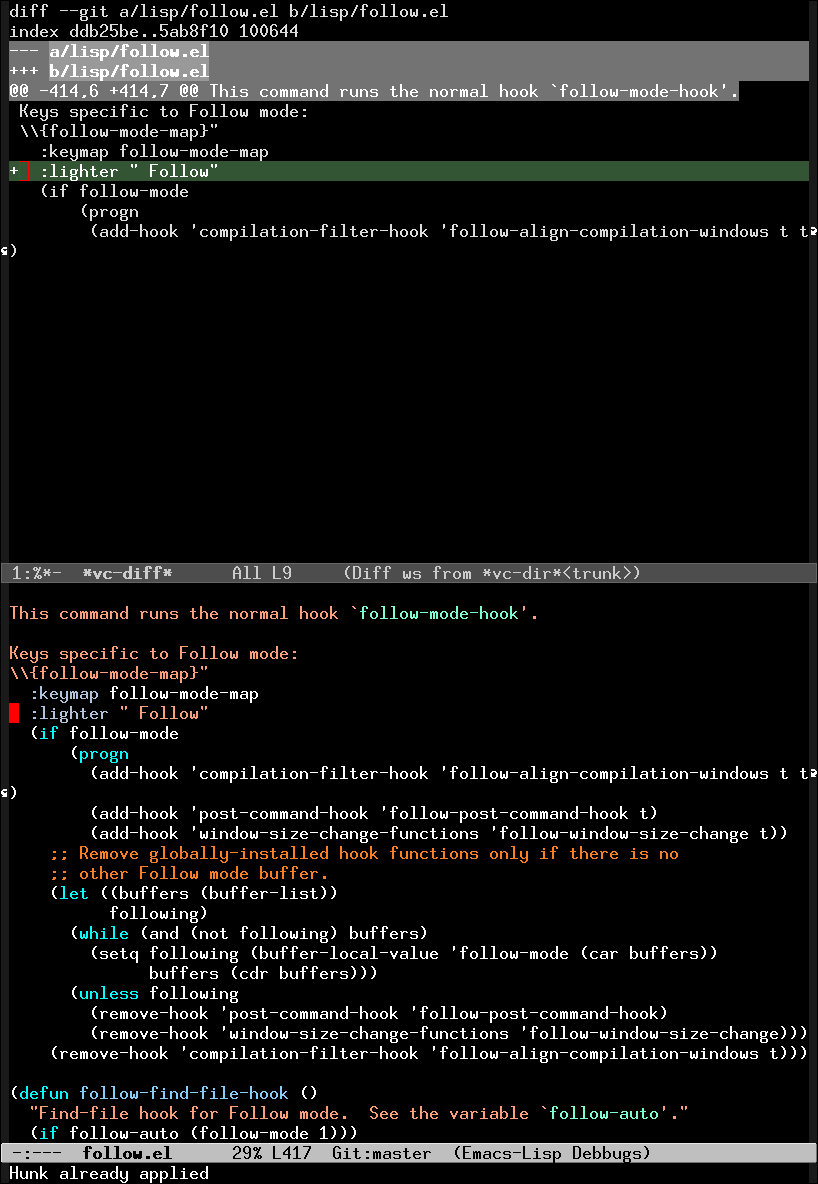 Here we can imagine that we do some clean-up, but this patch is perfect, so we just hit `M-m’ again.  This pops us into the ChangeLog with the correct user name, and the bug number appended.  If the user has never had any non-“tiny change” code in Emacs before, “(tiny change)” is appended automatically. 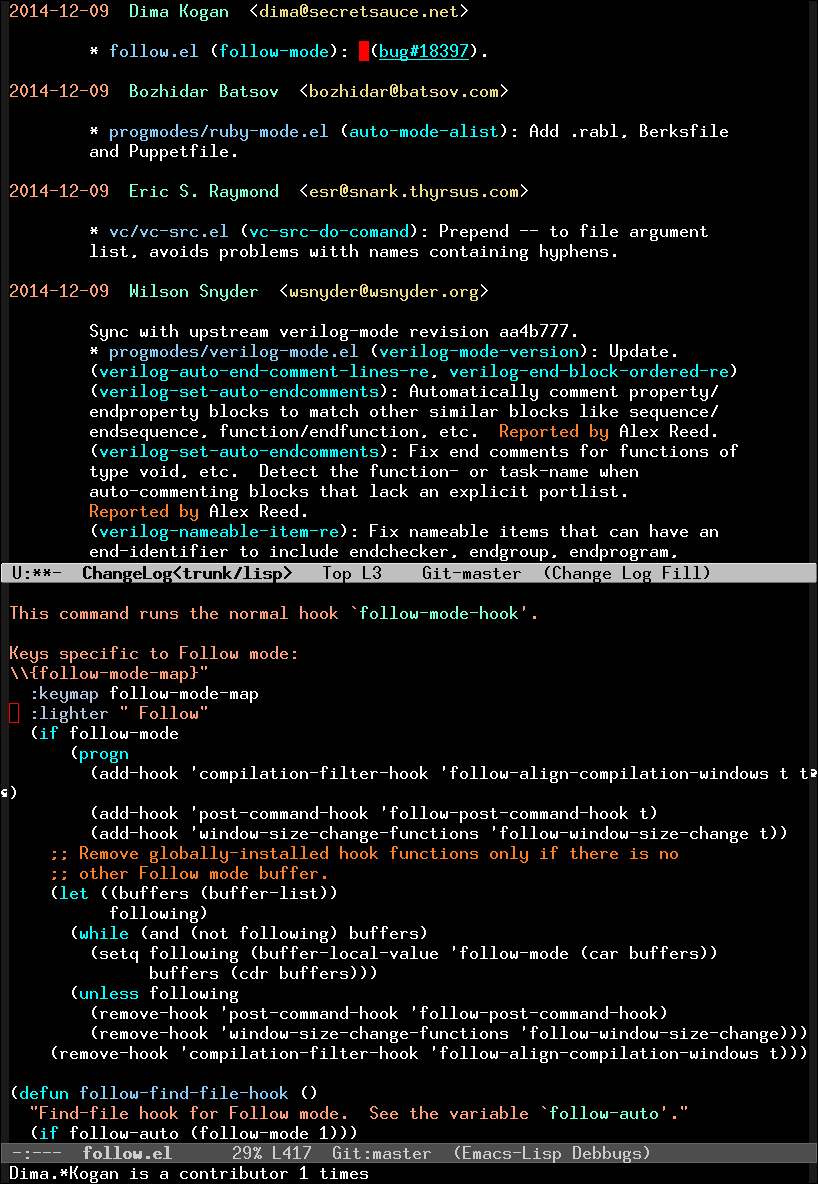 But there’s one non-tiny change from this user before, so no (tiny change), and we just type in an entry. 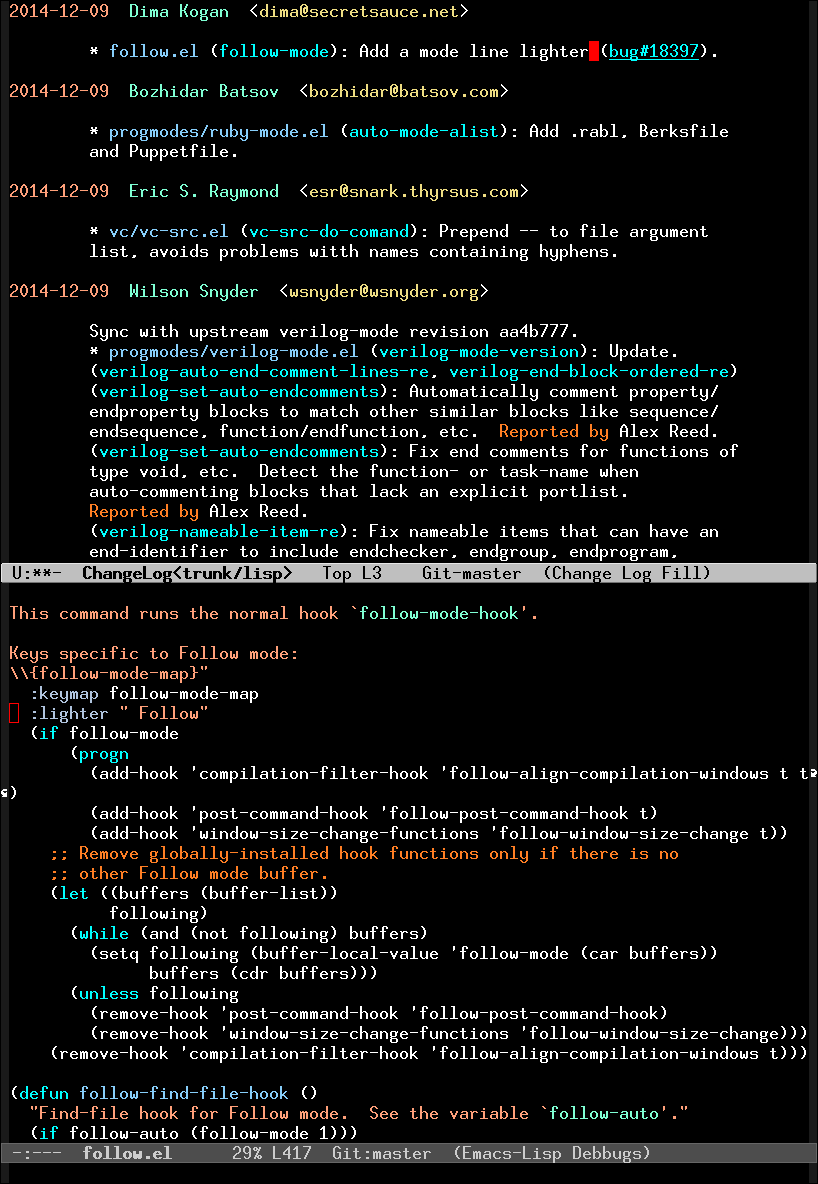 Then `M-m’.  This pops us to the top-level checkin buffer, filled out with the right data. 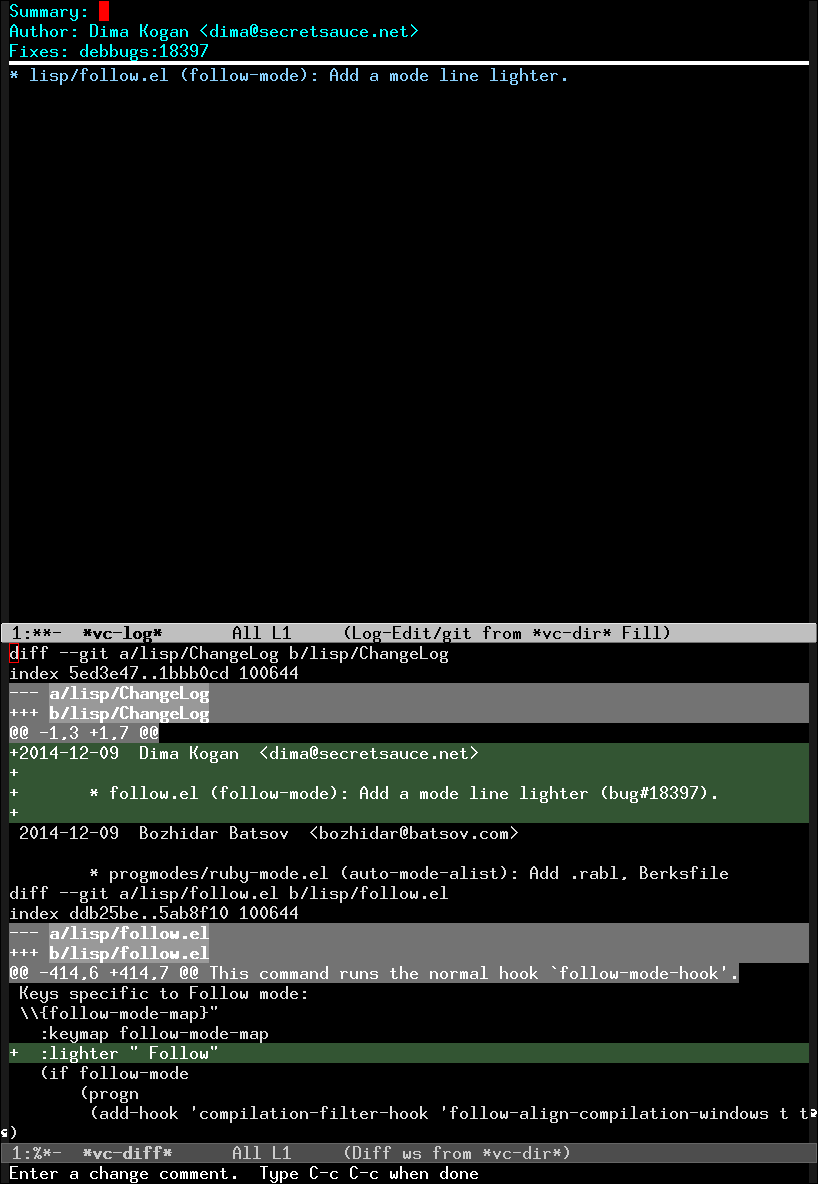 Ok, it’s not a one click solution, but it’s better than…  doing all this by hand.

Or using a web browser.

Emacs 25 will have a network security manager. You know — the thing that nags you when you visit https pages with invalid certificates and annoys all y’all so much.

Designing a thing like that is a minefield. On one hand, you have professional security professionals who seem to insist that the sky is constantly falling and that the only secure thing one can do is to snip the Ethernet cable, pour concrete over the computer and then bury it in a volcano.

On the other hand, you have, literally, everybody else: People who don’t care about network security at all, and if you so much as ask them a simple question once, they get mad and send you email about how mad this makes them.

So! Into the breach.

If you’re paranoid, you can make it do certificate pinning for validated certificates, too, so that you can see when the NSA man-in-the-middles your traffic by getting a Certificate Authority to issue a forged certificate for the domains you are visiting. That’s not on by default, because we are not paranoid.

It allows you to save all these “security exceptions” for the session or permanently. And that’s where the professional security professionals will balk.

The argument is that if we allow the user to accept unverified connections, there is no security, because users always just says “yes” to everything. While that argument may be valid, the other side of the coin is that failing to communicate can also have negative ramifications.

Only the user can really say whether visiting a web site that has a problematic certificate is justified or not. When visiting an email archive to find the answer to a technical question — perhaps it is. When visiting your bank — probably not.

So: I hope that the network security manager we’ve implemented is sufficiently non-intrusive that people won’t feel it necessary to switch it off, and I hope that it’s encompassing enough that it offers some added security against snooping.

If you want to start using it now, pull down the development version of Emacs.

While working on the Emacs Network Security Manager, it was suggested that Emacs implement a visual hash for certificates.  It turned out to be a not-unproblematic idea, so I didn’t do that, but by then I had already written an SVG library.

While staring at it, it occurred to me that it would be kinda neat if the image created would update in real-time.

So I did that.

I think this library will probably end up on GNU ELPA. 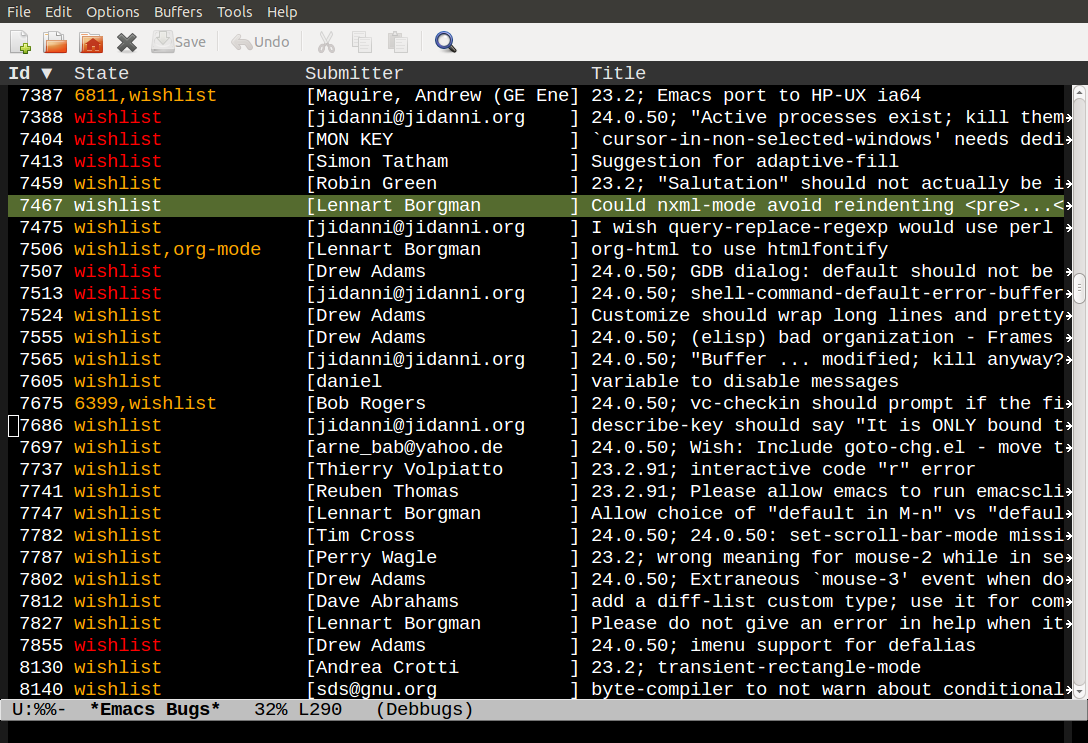 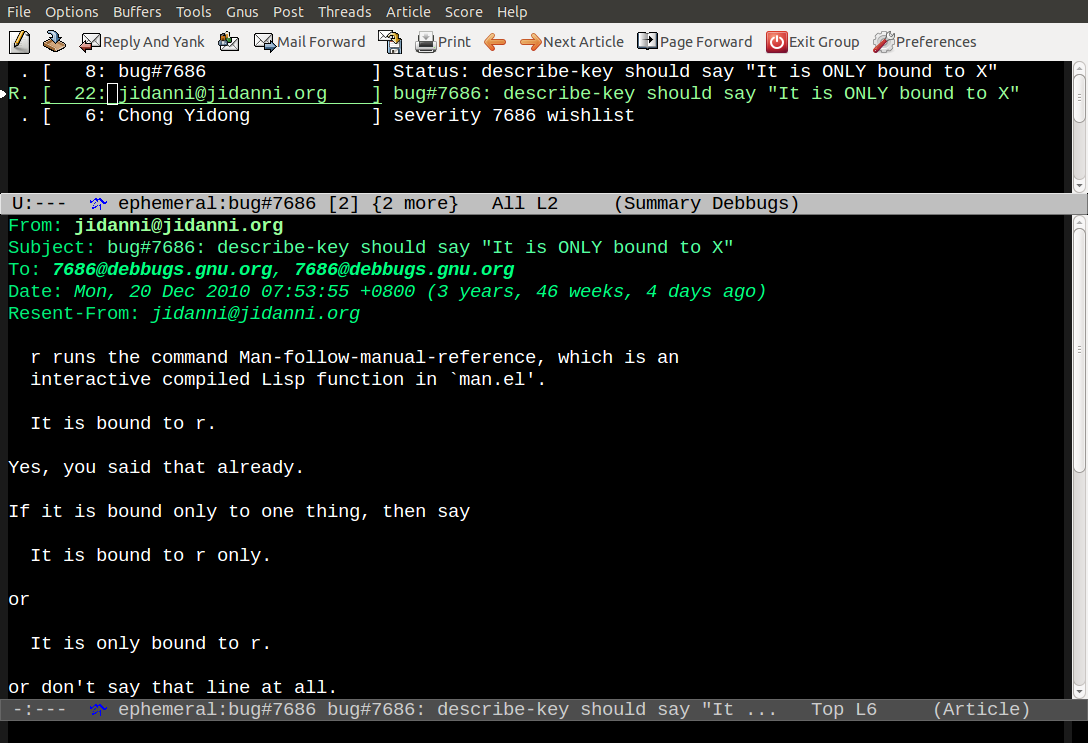